Back on the hills after a break…

Back on the hills after a break…


When I climbed Beinn an t'Sidhein in March, I didn't think it would be nearly 7 months before another summit bagged! But a broken collarbone acquired shortly after, with surgery and recovery put me out of commission for a wee while, then life got in the way. The best mountain fun in the meantime was nearly making it to the top of Mount Mansfield in Vermont, but then we did drive up to 3800ft

So it was an unsettled October weekend that forced us east to Deeside, and a crack at this pair of Corbetts. While it was never too cold, we did get some rain, sun, and a LOT of wind! We parked at the Keiloch car park and set off along the estate road to Invercauld House, accidentally ignoring our turning uphill to the right. We couldn't see the path marked on the OS 1:50k sheet, so had to briefly plod through the trees to regain our track. Autumn colours on the walk to Invercauld House

There was another wrong step before we left the very pleasant pine forest, where this time we turned right when we shouldn't have, following trail sign up a track (yep, the one the WH report tells you to ignore). But we were soon back on our way, along the very good track that lead up the head of Glen Feardar and to the bealach between our two hills. We decided late on to go for Culardoch first, as the cloud was down to about 2300ft and, hoping the weather would improve, we figured it would be the easier hill to do in cloud. Sure enough, after passing the site of the tree-growing experiment, we reached the sharp bend in the track that was our exit point. From there it was an easy tramp east up to Culardoch's summit trig point.

There was a bit of breezy rain to greet us, so we did a quick U-turn and headed back the way we came. On our descent, the cloud began to lift, the rain stopped and he wind picked up. But at least we could now see more of Carn Liath and Creag an Dail Bheag, our second hill. Looking back to Culardoch, now cloud-free

As we left the track to head W up the steepest slopes of the day, the cloud continued to rise and the wind got stronger. By the time we were on Carn Liath's jumbled summit plateau, we were right in the teeth of the gale. We staggered to the "old" summit cairn and turned NW towards the new summit just as the cloud cleared. I'm not sure I've experienced such a strong wind before, and I felt like Matti Nykanen ski-jumping as I had to lean forward 45º just to keep moving. Approaching the tops of Creag an Dail Bheag

Creag an Dail Bheag's summit plateau is just as tricky to identify the summit, as every lump seemed to look higher than the one you're on. We visited all the candidates, and having quickly admired the huge slopes of Ben Avon disappearing into the cloud above us, we turned S to drop down into the glen of Glas Allt Beag. As we descended, the wind thankfully dropped and the sun came out, with at one point a particularly spooky shaft of light over Braemar in the distance. Braemar, a long way away!

The glen was easy walking—short heather, then a bank alongside a ditch cut into the E slope, which led us to the stalker's path (really a grassy track that made for good walking). This took us back to the woodland, and down through the trees, to hit the main track just above Aldourie house. 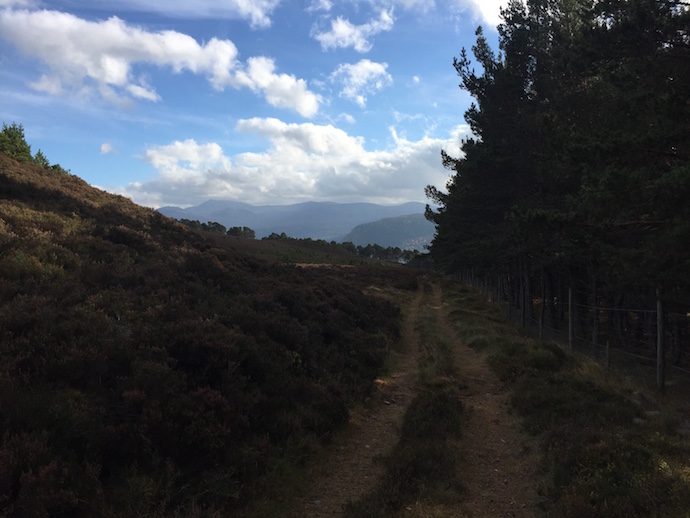 Sun's out on Lochnagar

From here, it was an easy walk along the estate road back to the car, and a well-earned refreshment at The Bothy in Braemar. 2 Corbetts, 15 miles…it was good to be back!