The perils of sticking to a pre-arranging date for our joint ultimate Donald had been predictable for some days. Though the sun was shining at 8am as I drove south from near Edinburgh, the Met Office's promise of low cloud turning to rain with strong winds was being fulfilled by the time Teviothead was reached. A few miles later as I took the single track road to our start point for Cauldcleuch Head I worried at the lack of few passing places, but thankfully there was zero oncoming traffic. We had all arranged to meet at 10am in the large parking area by the one area of forestry shown on the OS maps. In fine weather the plan was to head up Tudhope Hill for a high level traverse to Cauldcleuch Head and then on to Stob Fell admiring the wonderful vistas as we went. Since the weather was not fine, plan B was to walk up the valley with a 'quick' dash for the summit then retrace our steps. As I approched our rendezvous, Jaywizz and husband simultaneously arrived from the other direction. While we awaited the fourth (and fifth) members of our party Jaywizz told me that they had found enough parking apace for all our vehicles just past the bridge over the Billhope Burn. Once our party was complete we all moved to park there, pulled on our boots and started up the track past Billhope Cottage. Parking just east of the bridge

The first part of the walk along a good track revealed how out of date both the OS maps and Google and Bing's aerial views are. There is much more forest than shown there, and a native woodland recreation scheme - Gorrenberry Jubilee Wood - is busy planting native trees and also creating paths. Information board beside the track

The map on the information board beside the track is worth studying. Doing so might have helped us choose a better downhill route from the summit - or it might not. The information board map

The harder uphill work began after a couple of kilometres where a track led uphill. This swung round to the south into the wind. So when a left turn beside a fence presented itself we took it. The uphill track after turning left

When it levelled out we started up the hillside instead. Earlier we'd seen a fox crossing the track in front of us. Up here the grassy slope was perforated with small burrows indicating a healthy population of voles thereabouts. Just one was seen running for cover. As altitude was gained we ascended into the clouds and the wind strengthened. On the ridge we found an ATV track heading our way with a series of widely spaced blue topped posts alongside it. 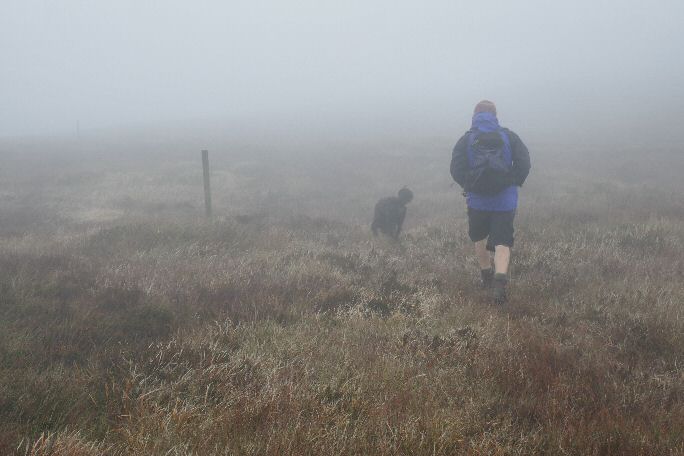 One of the blue topped posts

This took us all the way to the summit over quite good ground though those not recently acclimatised to Galloway tussocks and bogs might disagree. With posts, fence and ATV track to follow you just can't go wrong.

We stopped for a few minutes for obligatory summit photos and for Jaywizz to struggle her way into a giant purple Quality Street to share out her favourite sweets. (See https://www.walkhighlands.co.uk/Forum/viewtopic.php?f=9&t=52115 for an earlier indulgent occasion) A summit group shot of all five of us - with the Big Purple One!

Wanting to get out of the wind we decided to lose altitude by heading north and find some shelter in the valley to enjoy a snack or two. We certainly lost altitude, but the wind was funneling up that valley and it appeared shelter was not to be had. Luckily we found erosion had scooped out a hollow at the valley bottom so we were able to sit quite well protected from the blast. It had been almost dry up till then, but the Met Office had scheduled rain for the afternoon and it started to arrive. So it was on with waterproofs before we continued down.

This wasn't the best of routes. We started by following the stream, but that ran in a narrow steep-sided channel that was difficult and slow to follow. After 100m of that we headed uphill slightly to traverse twenty or thirty meters above the stream on steep wet grassy slopes that needed some care. 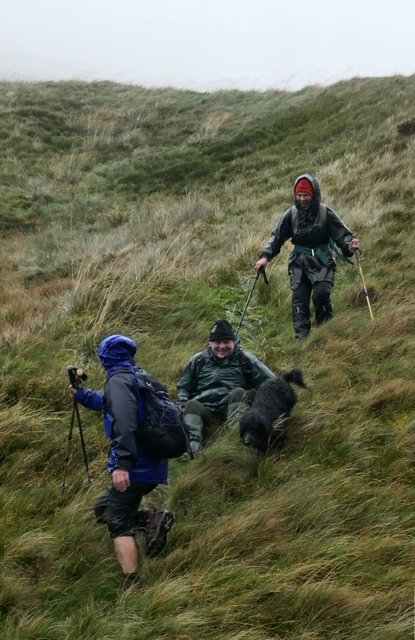 Eventually the bottom of the valley broadened and it was possible to walk along beside the stream down to a footbridge over the Black Grain. 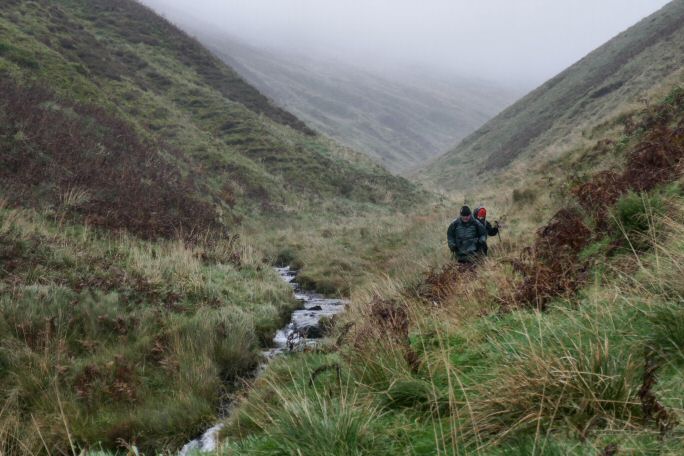 The footbridge over Black Grain.

The information board map shows a path heading for the summit up the south side of North Mid Hill from there. I assume it too is marked by posts, though we hadn't noticed it when we were up top - excusable given the poor visibility. From there it was a simple, and much speedier, stroll back to the cars with the rain now stopped. Walking down the main track

Back at the car my Garmin with its barometric altimeter informed me that the day's climbing had totalled 1026m. Not a believable total for a 619m high hill. Is Cauldcleuch Head really a Munro?

The explanation is that once again the strong gusts of wind during the day had caused pressure fluctuations interpreted by my Garmin as altitude changes and religiously added up to give a much inflated total.

Why I seemed to have climbed so high. My Garmin's altitude record around the summit.

Either counting contours or smoothing out the altitude profile gives the actual height gained as about 420m. (For a previous report of this phenomenon see https://www.walkhighlands.co.uk/Forum/viewtopic.php?f=9&t=67649 )

Despite the weather Jaywizz was delighted with the day and I too was happy that we'd successfully compleated the Donalds. Just like the seven summits of my previous two walks visibility had been about 50m at best and I can see me returning to many of them in better weather.

Thus ends my round of the Donalds after fifty one years. I didn't take copious notes at the time, but my first was probably in August 1966 in the Moorfoots though it may have been later that year. The walks I recorded on my 1" maps show early walks concentrating on routes through the hills rather than over them. Later I switched my hillwalking attention to the Munros, so by November 2014 my Donald total was only 23. That is when I joined Jaywizz in her ambition to compleat, though as we often said to each other over the last three years 'hiilwalking isn't competitive'.

Returning to the Southern Uplands after half a century I was amazed at the changes. The amount of forestry that has appeared and is now disappearing, and the crop of wind turbines visible from almost every summit. Some things don't change. That August 1966 walk only merited a brief mention in my diary, but it started 'Moorfoots, rain and mist'. That sounds familiar! It continued '13 miles, lost for first three hours, 7hrs 10mins'. I have no memories of that walk and I don't remember being lost, though we may not have known precisely where we were. Not the same thing at all.

Congratulations on the compleation - you'll need to get Dave Hewitt involved and see how your length fares! I was lucky enough to get Cauldcleuch out the way a few weeks ago in decent weather, although it's not the most appealing of hills. Very interesting to hear about your early notes - I'm afraid I'm far too young to have seen a change in many hills at all!

Well done to you both on completing the Donalds- a good- if rather wet - circuit. I note you had typical completion weather

I personally think this hill gets a bad rap. I did it in less than ideal conditions a while back, along with the nearby(ish) sub 2000, on a drive back north from visiting my kids in East Sussex. Quite enjoyed it, as I recall

Many congrats from me.
Having compleated the Donalds earlier I appreciate the challenges involved, personally I loved them. However, your compleation hill was near the bottom of my favourites if not right at the bottom, boggy summits aren't that appealing. I did enjoy the walk in up the Glen though!

Thanks to all for their congrats. This round was quite a bit different from my rounds of the Munros since all could have been done on a day trip from home, and I didn't need to camp out once. They do cover a fine variety of terrain and offer some challenging circuits. There are many that I will need to visit again in better weather and this last summit is one.

Fife Flyer wrote:Many congrats from me.
Having compleated the Donalds earlier I appreciate the challenges involved, personally I loved them. However, your compleation hill was near the bottom of my favourites if not right at the bottom, boggy summits aren't that appealing. I did enjoy the walk in up the Glen though!

I think you are being unfair to Cauldcleuch Head. Compared to some of the Donalds further west the ground was solid. I didn't sink in even to my ankles let alone above my knees.

I shall, however, wait for much better weather before I return to climb Greatmoor Hill and then perhaps enjoy Cauldcleuch a second time.

Congrats on the rounds - and 51 years is an excellent span - I'm all for slow rounds rather than fast ones. Re the question of has there been a longer span, I know of three (and of course there could well have been more as records of this sort are never complete). Willie Shand of Crook of Devon took around 58 years, starting with the Law on his beloved Ochils in 1933 and ending on Knee of Cairnsmore 20/7/91; Tom McArthur of Lockerbie took around 59 years, also starting in the Ochils (not sure where) around 1939 and completing on Tinto on 17/11/98; but the longest round was probably that by John Wallace who took 60 years (possibly slightly under) from a 1928 start on Auchope Cairn to a finish on Broad Law on 2/10/88 - this was also his Corbett completion and he'd started those in 1932.

If you drop me a line I'll include you both in the list of known Donaldists - all I need to know is real names, first hill and date (ie Moorfoots August 1966 in McMole's case) and where you're based town/city-wise.