Bit of a late start for this walk due to feeling rather lazy in the morning (most Friday evenings these days involve a long train journey back from Sunderland, so it takes quite a bit of incentive to get me out of bed early on Saturdays). I had set off from the house with a number of possibilities in the west in mind, but ended up parked near Ling Hut at around 1:30pm.


Map.gpx Open full screen  NB: Walkhighlands is not responsible for the accuracy of gpx files in users posts
Sadly I had probably missed the best of the weather due to my late start, but it still wasn't too bad. I started out on the path to Ling Hut, leaving it shortly before Lochan an Iasgair and heading straight up the side of Sgurr Dubh. 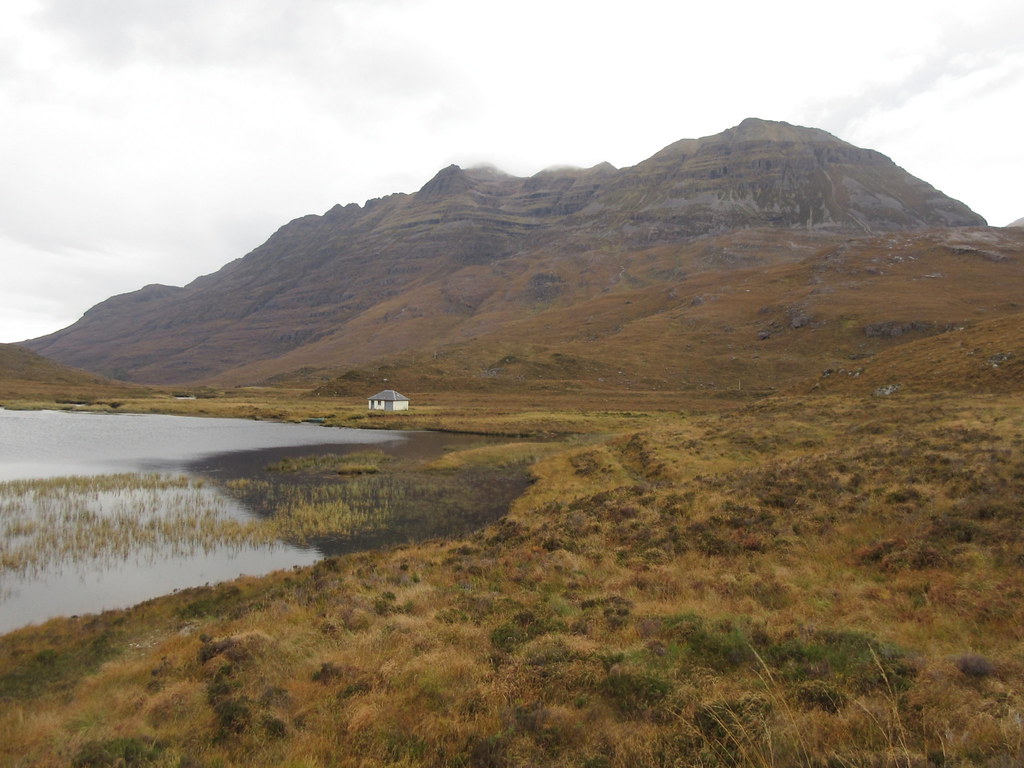 Liathach from Lochan an Iasgair

Due to the amount of rain in recent weeks, everything was really slippy. Higher up, I found a route through a band of slithery crumbling quartzite, quite glad when I was back on gentler territory again. 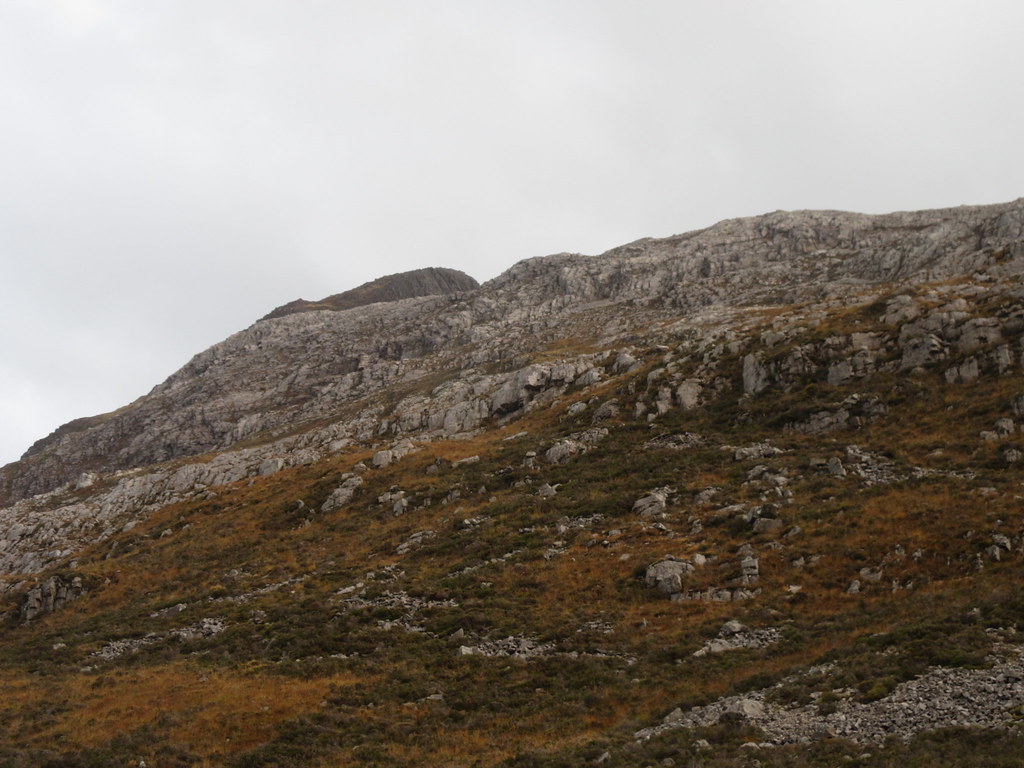 The way up Sgurr Dubh 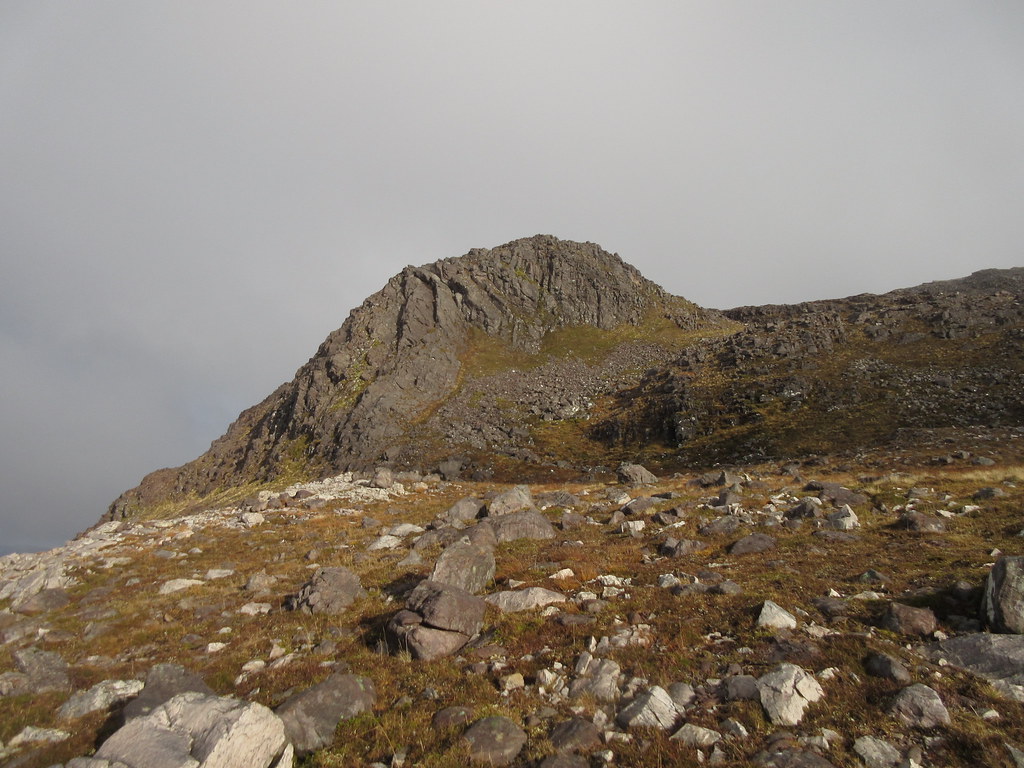 Not quite the summit of Sgurr Dubh

There is a sandstone outcrop which looks like the summit from here, but the highest point is actually away to the right a little, on quartz. Although the cloud was down initially, it soon cleared away to show me that the Fannaichs had plenty of sunshine. I had fancied something a little rockier and more scenic though, so I didn't mind too much. 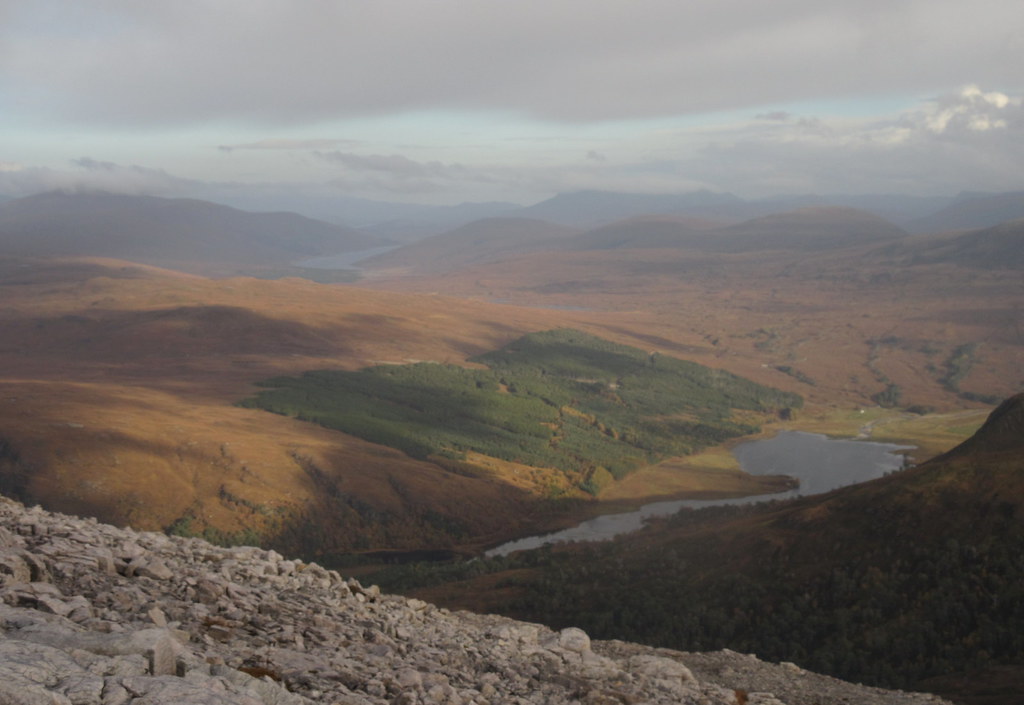 Loch Coulin and Loch a' Chroisg from Sgurr Dubh 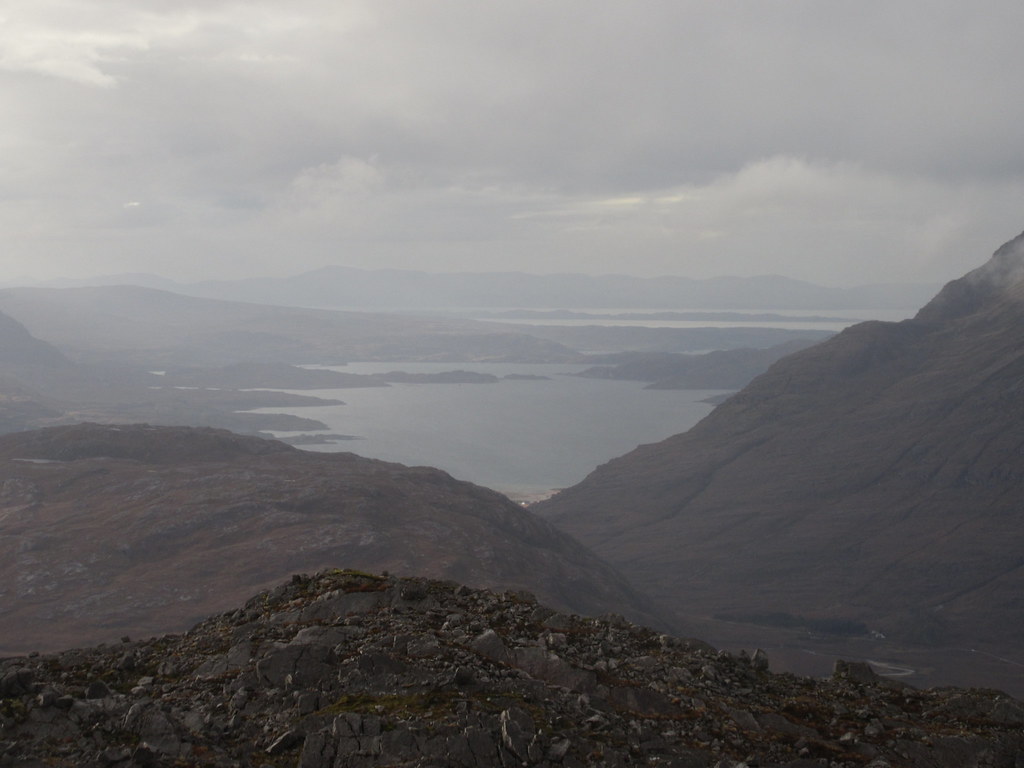 Loch Torridon and the Trotternish peninsula of Skye 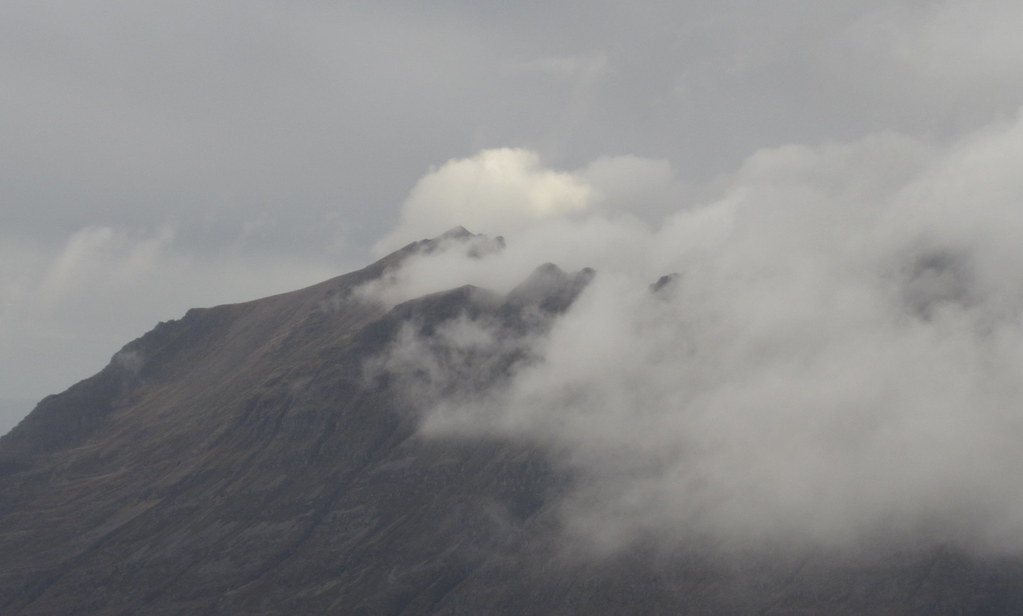 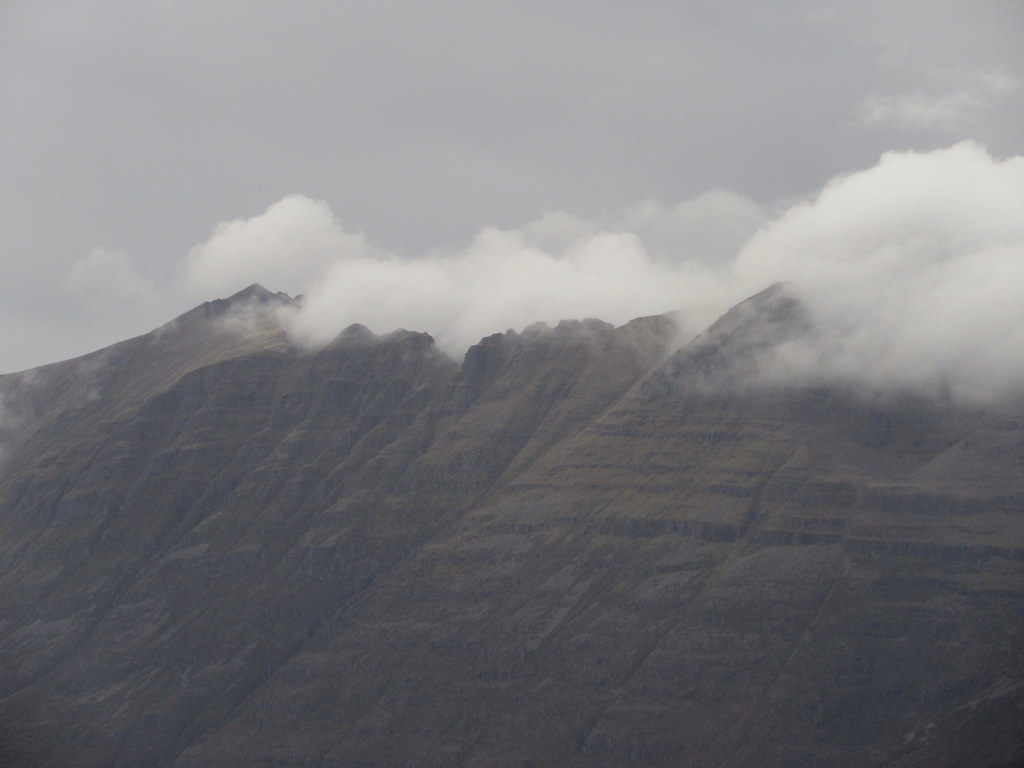 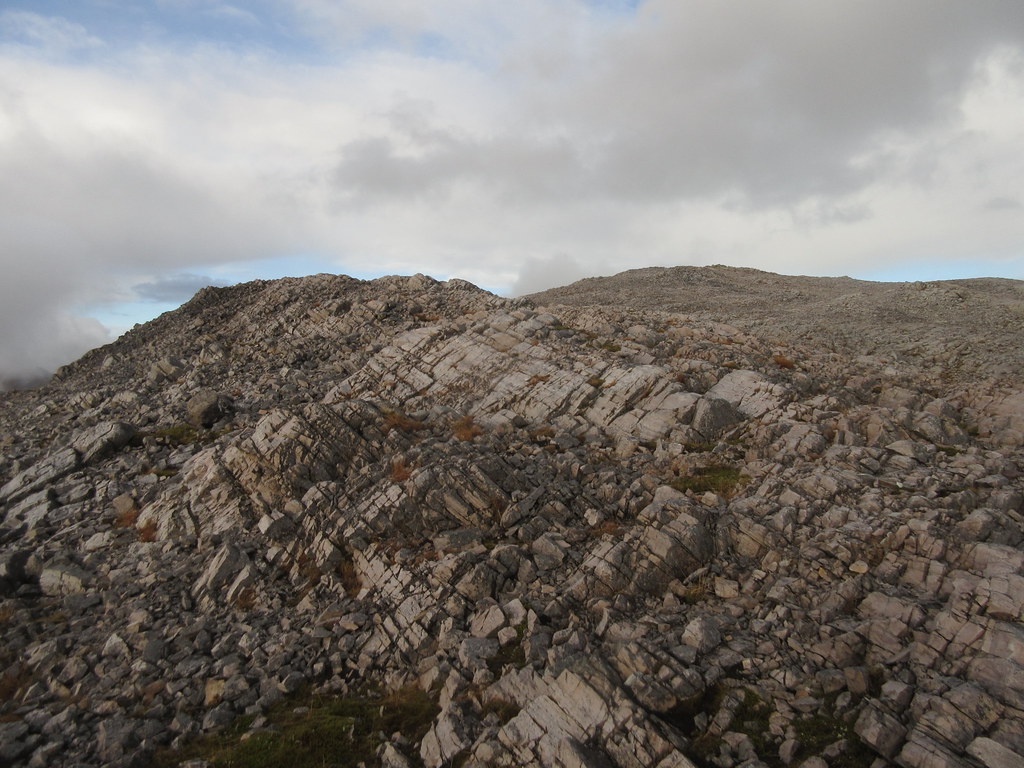 Descending towards Sgorr an Lochan Uaine was interesting, weaving about between outcrops, scrambling down over rocks and passing lochans hidden away at different levels. 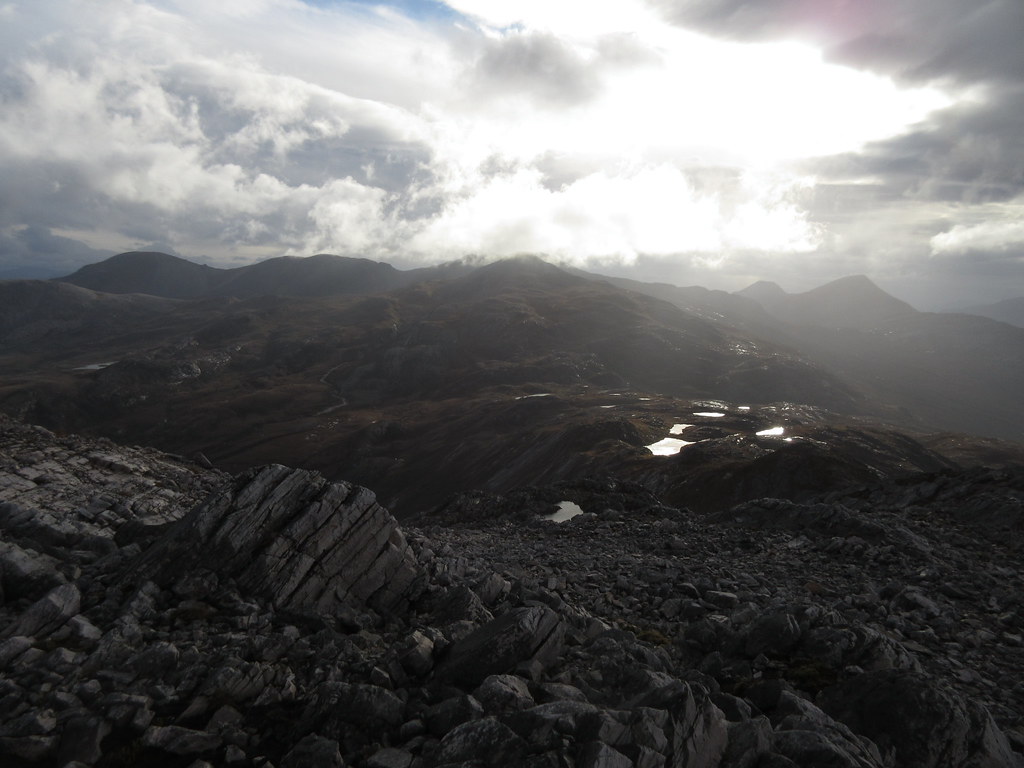 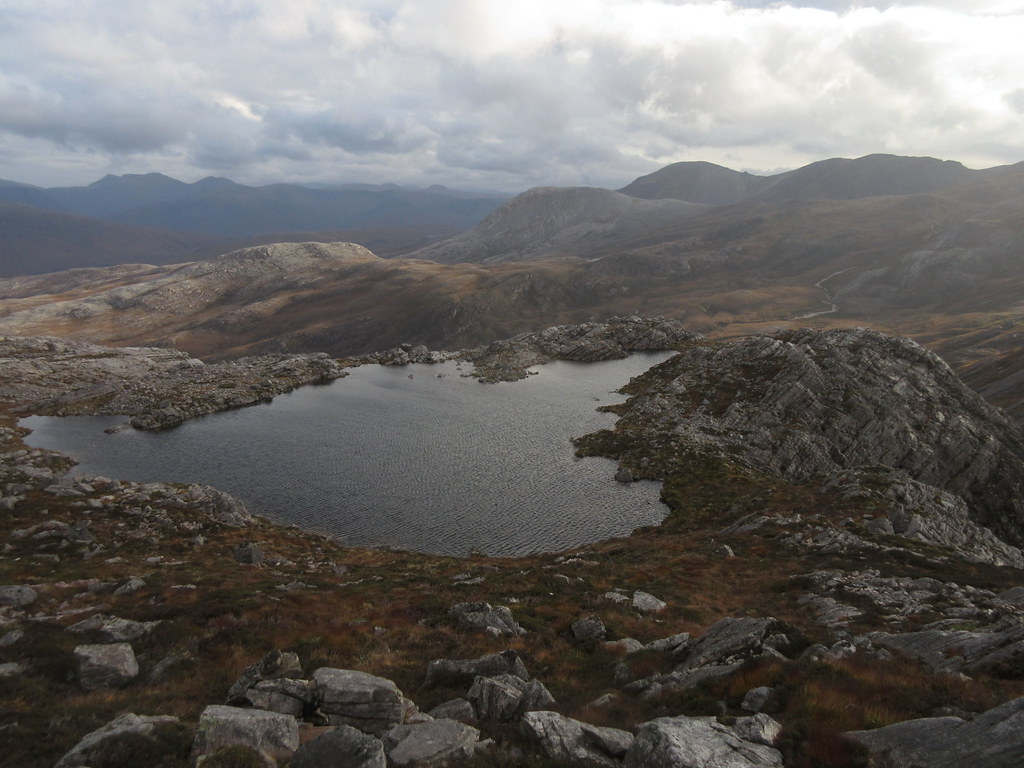 I was surprised to pass a stag particularly close by - they usually scarper long before I get to them. Perhaps this one was feeling a little cocky about still being alive on the last day of the shooting season 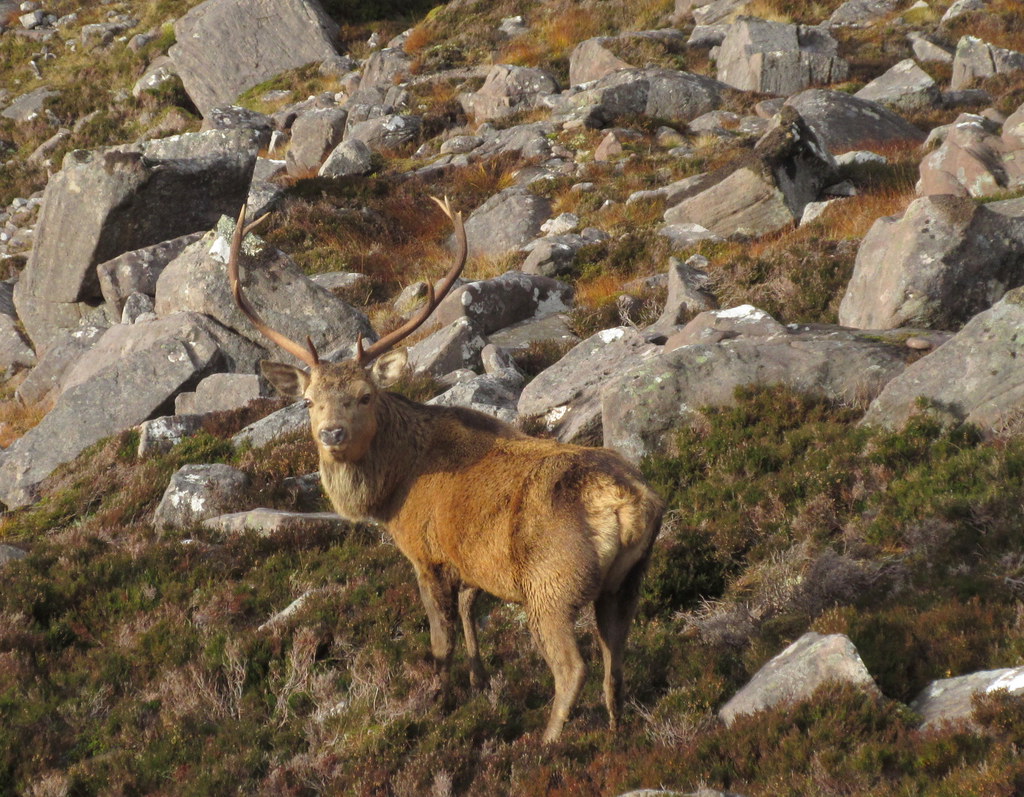 Someone didn't get the memo about shooting season 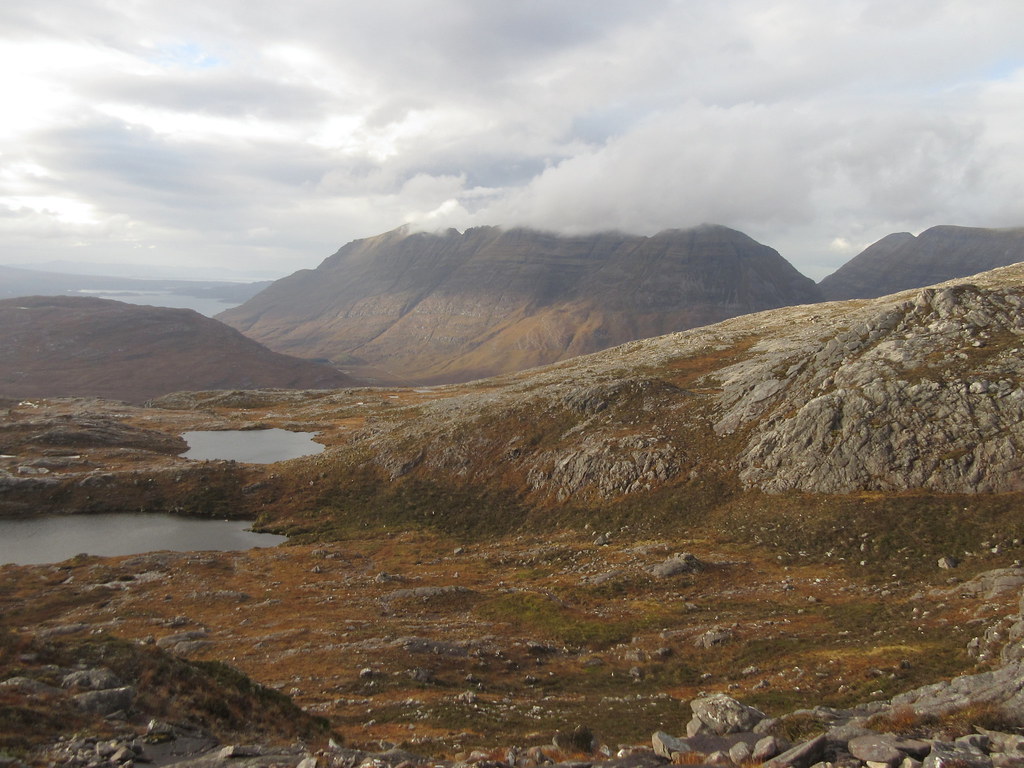 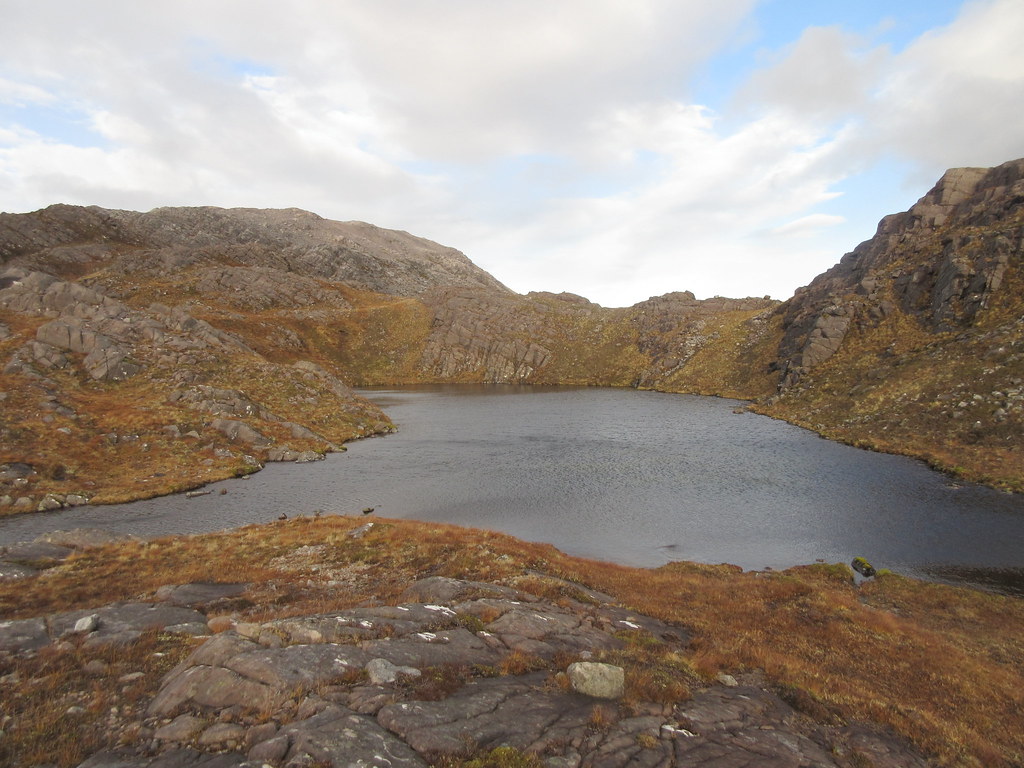 The ascent of Sgorr nan Lochan Uaine is more straightforward, first along the edges of some sandstone ribs, then onto quartz scree again. Lower down, a large flock of birds took off - I wasn't sure what they were but suspected waxwings. Not sure if you'd typically see them up here though, even if it is the right time of year for them. 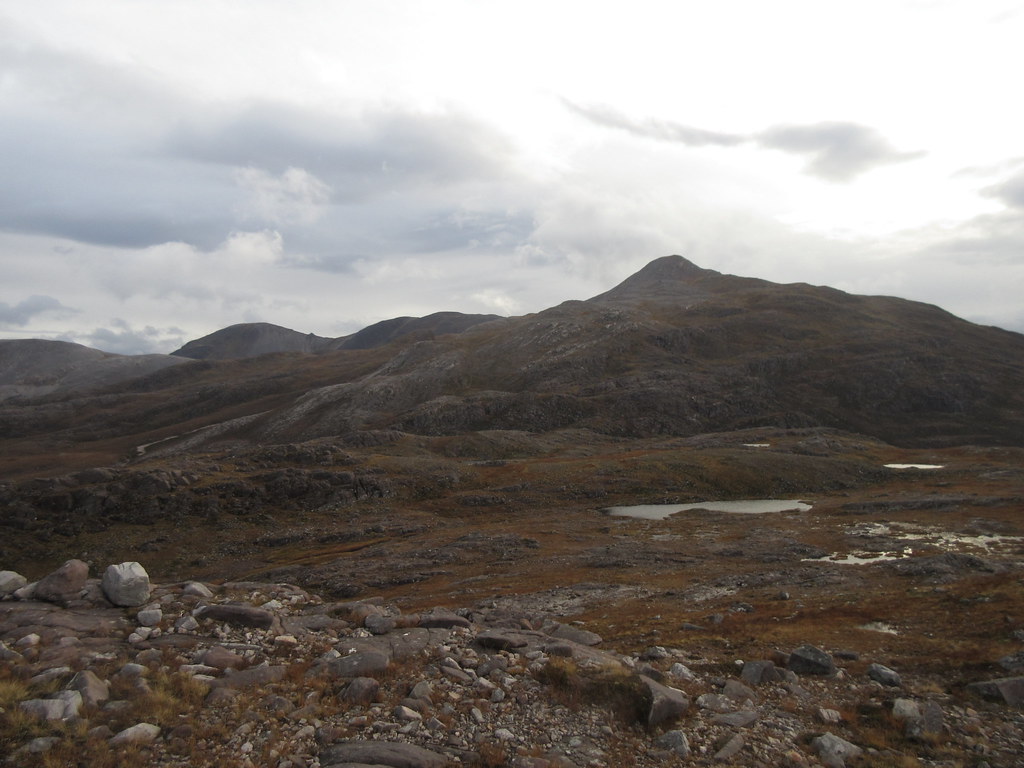 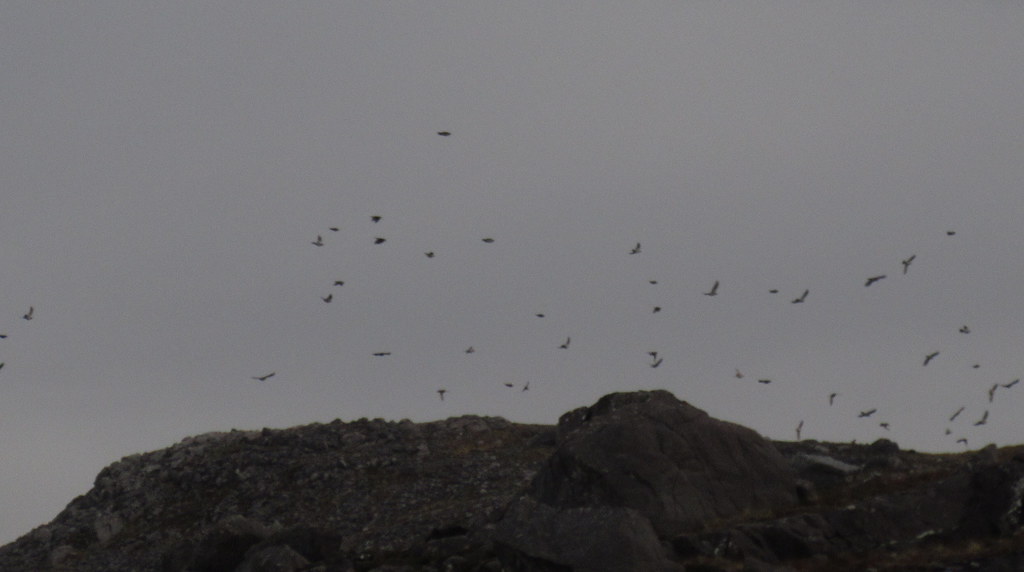 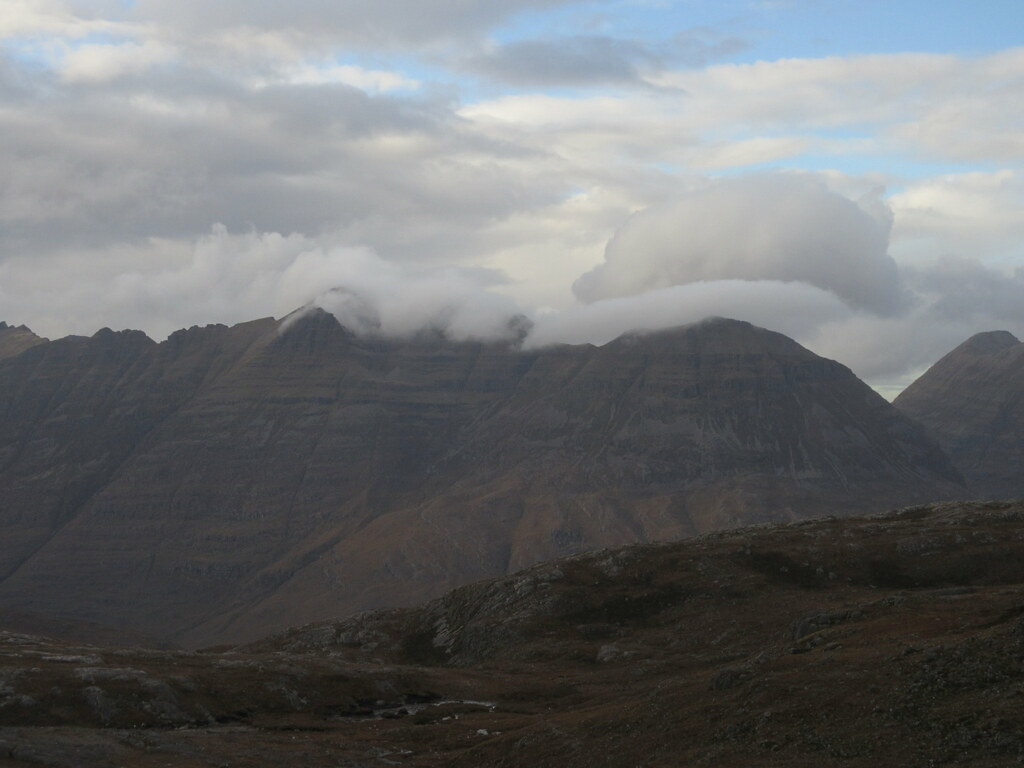 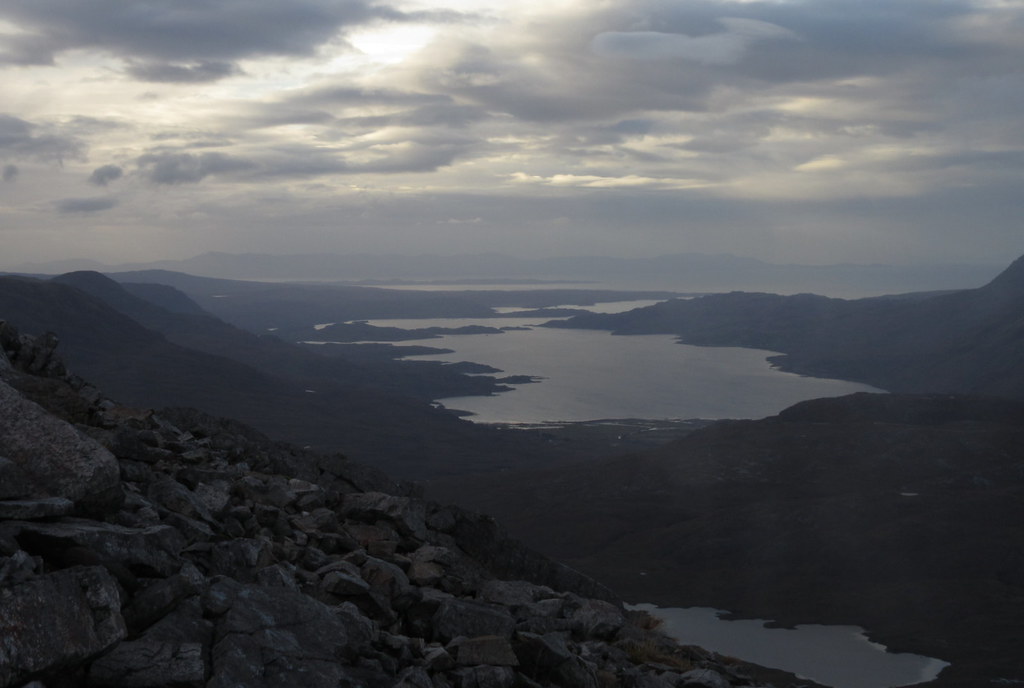 The summit was in and out of the cloud, but I could see one of my main objectives for the day - the rib of rock that separates the two lochans collectively known as Lochan Uaine. Really they should have separate names as they don't even join up (the outflows go in opposite directions). I remember traversing over to Sgorr an Lochan Uaine from Beinn Liath Mhor about 10 years ago and thinking that the twin lochans were definitely somewhere worth coming back to. 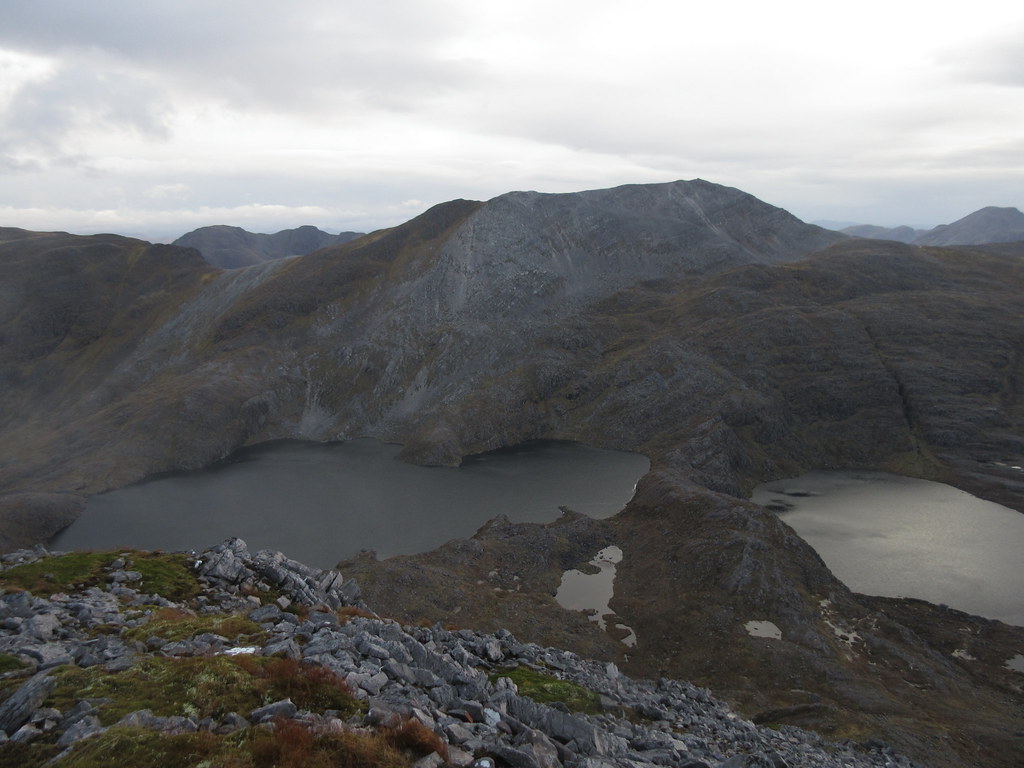 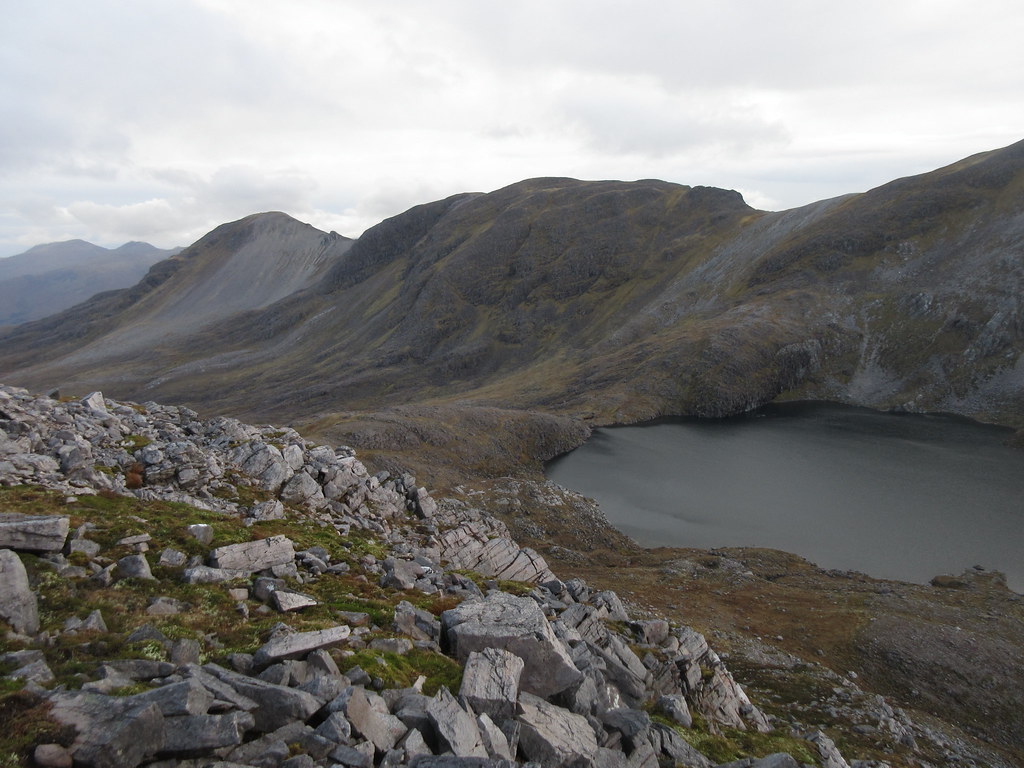 I descended the SE ridge for a short way before cutting back across the face of Sgorr an Lochan Uaine - mostly easy with one short section of very loose scree - to reach the rocky rib. It was well worth wandering out along it to stop for a break. 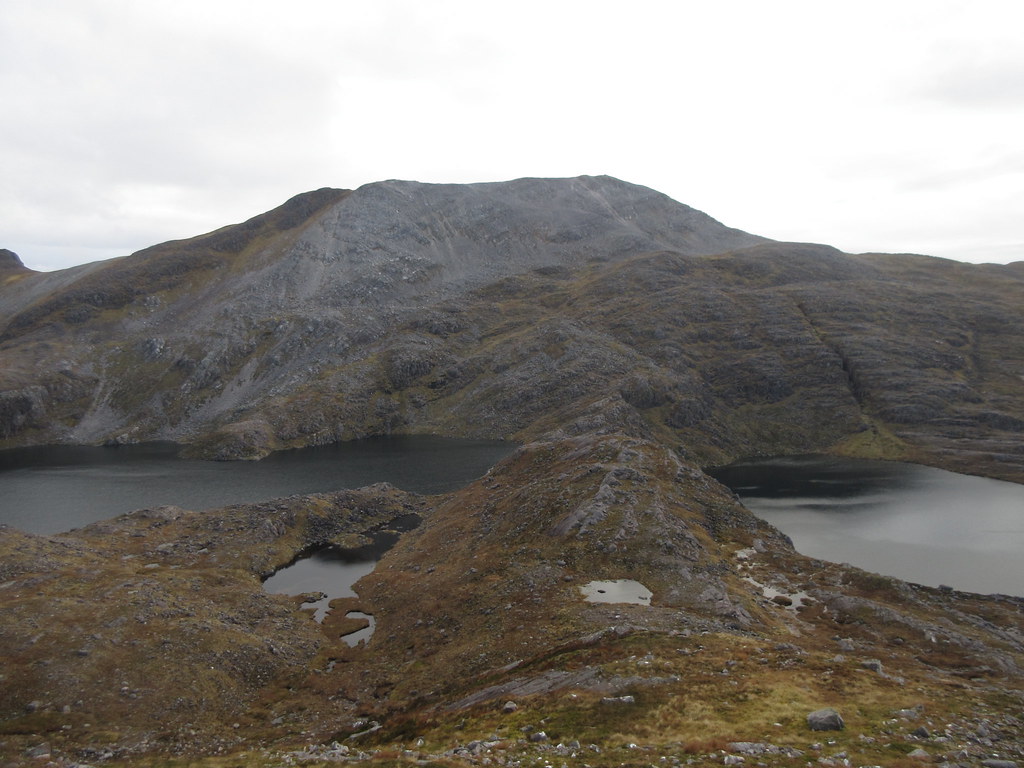 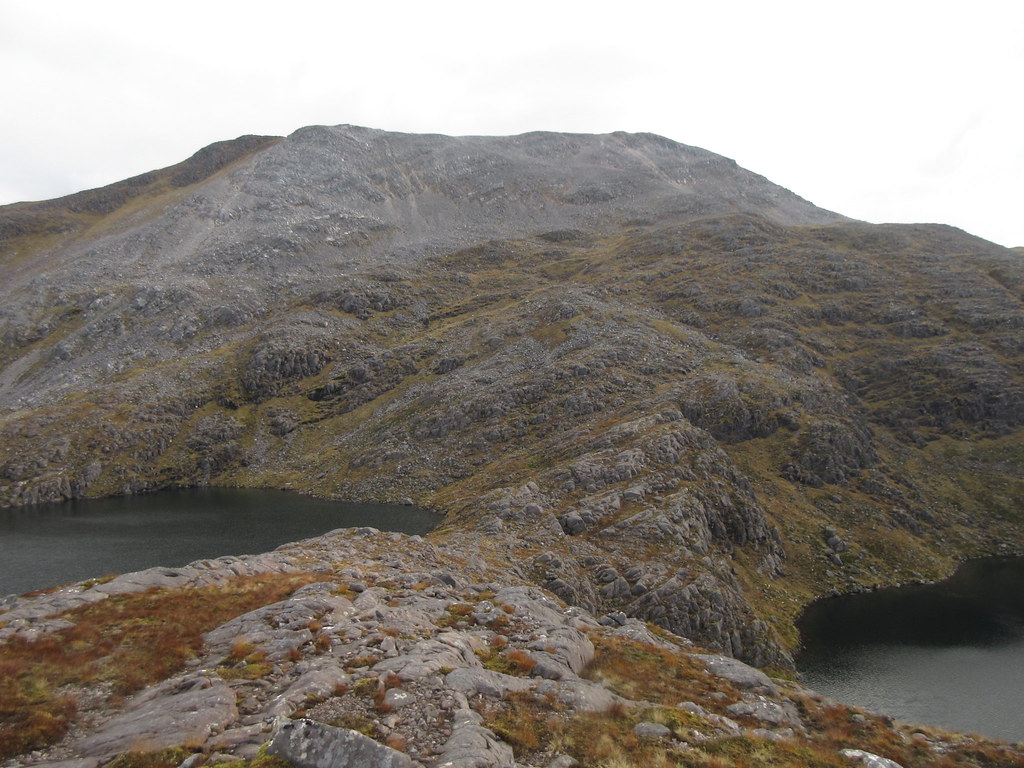 Lochs are at quite different levels 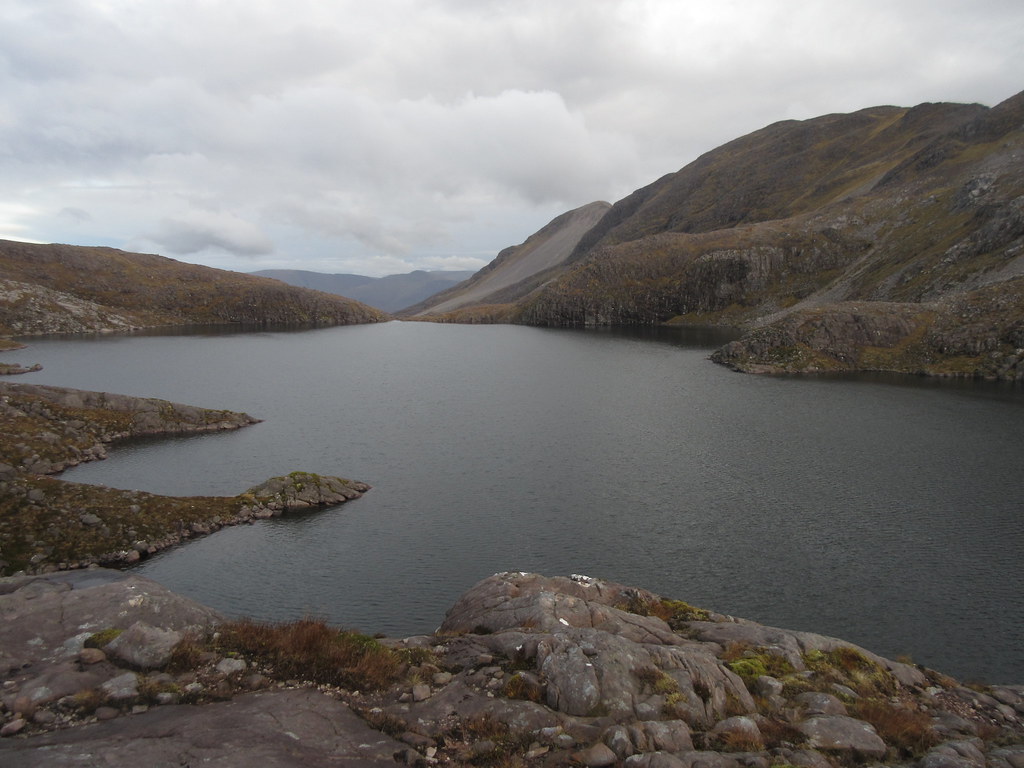 After a stop, I retraced my steps to reach the northern shore of the western lochan, and worked my way back to the Ling Hut stalker's path from here. 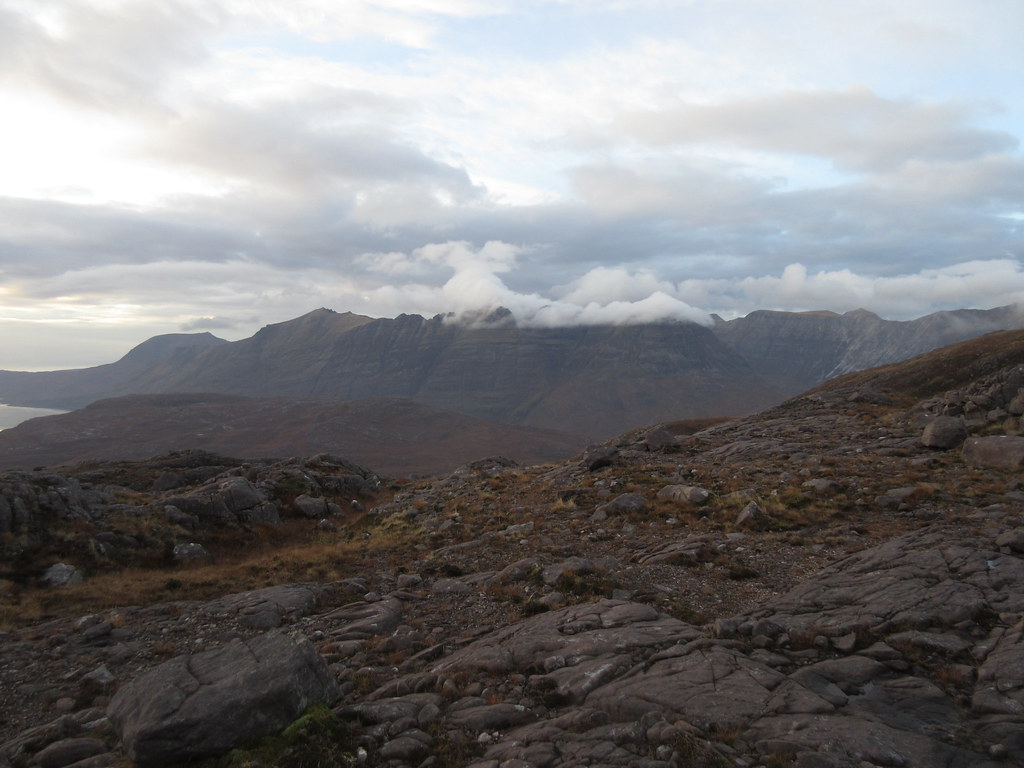 Liathach from the Lochan Uaine walk-out

On the way were some swans and a lovely sandstone slab with the outflow of the lochan running down a fault at the edge. There was a bit of bog and heather to cross to reach the path, which is in pretty good nick for the most part. 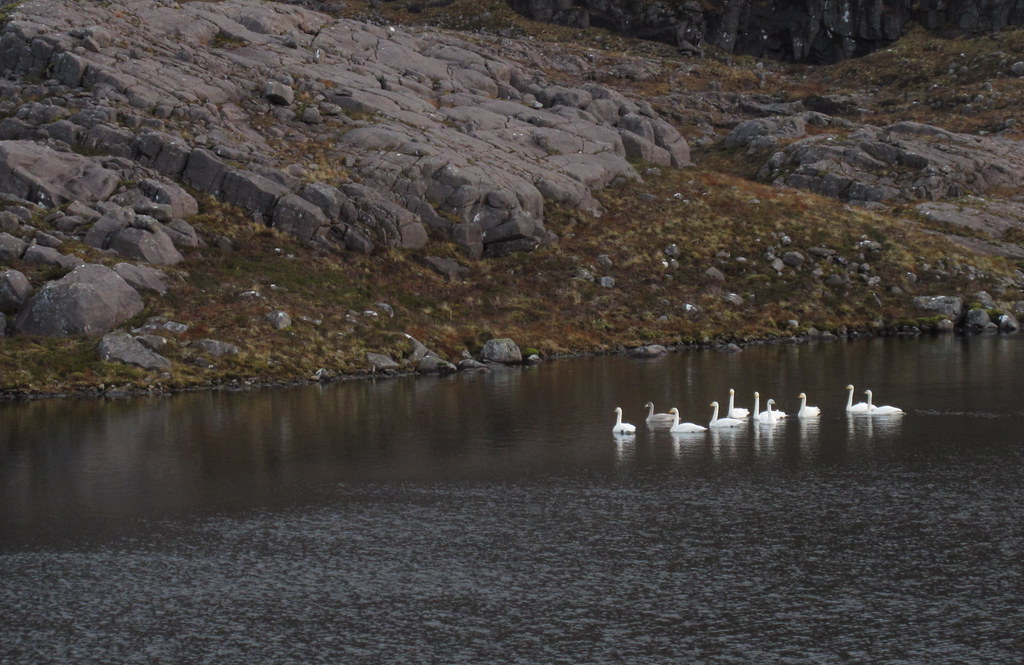 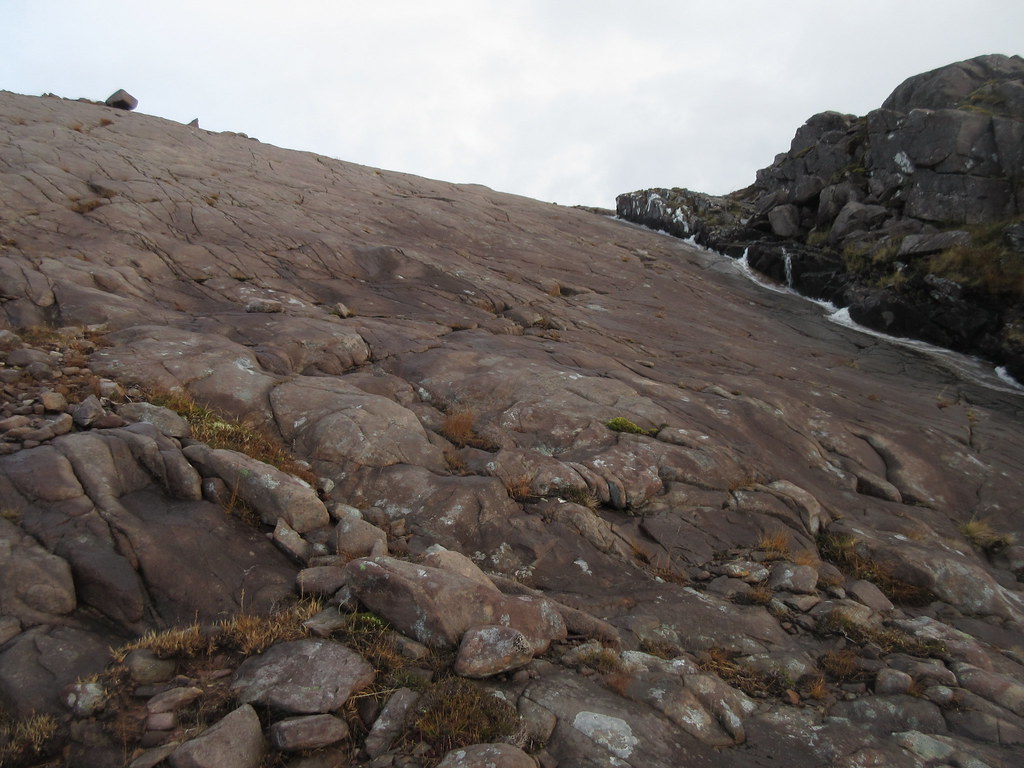 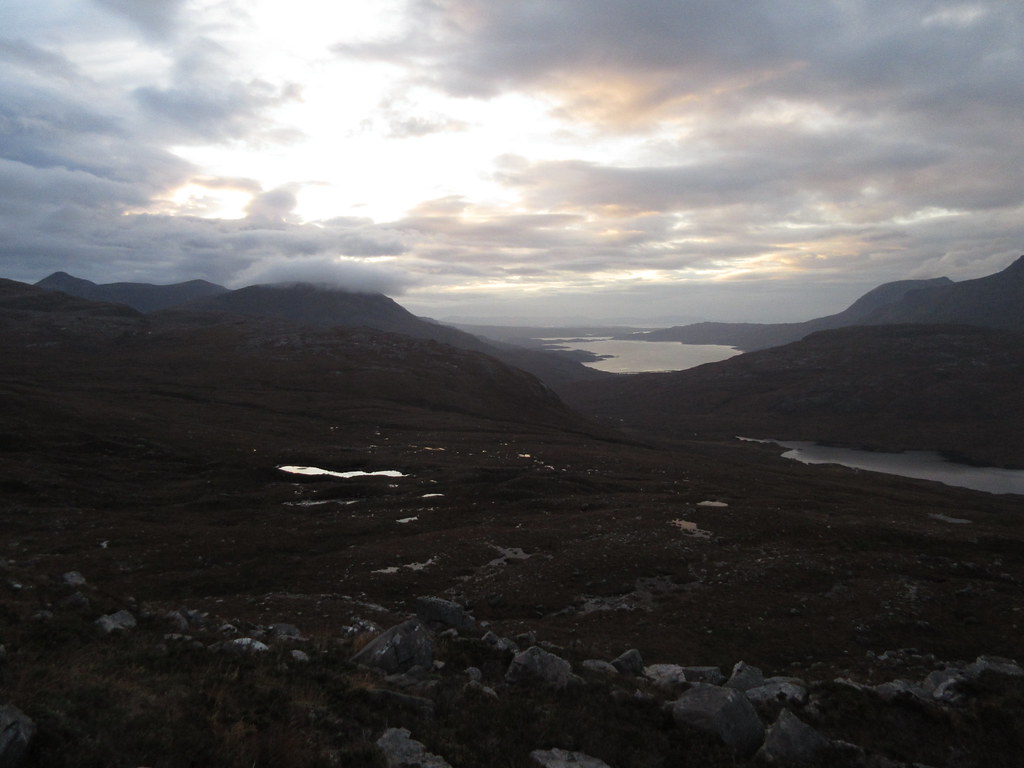 As remembered from previous expeditions back down this path, it seems to take way longer to reach the road than you think it will. It was almost dark by the time I got back to Ling Hut, although I had fully expected this due to my late start. The carpark was half-full with motorhomes. 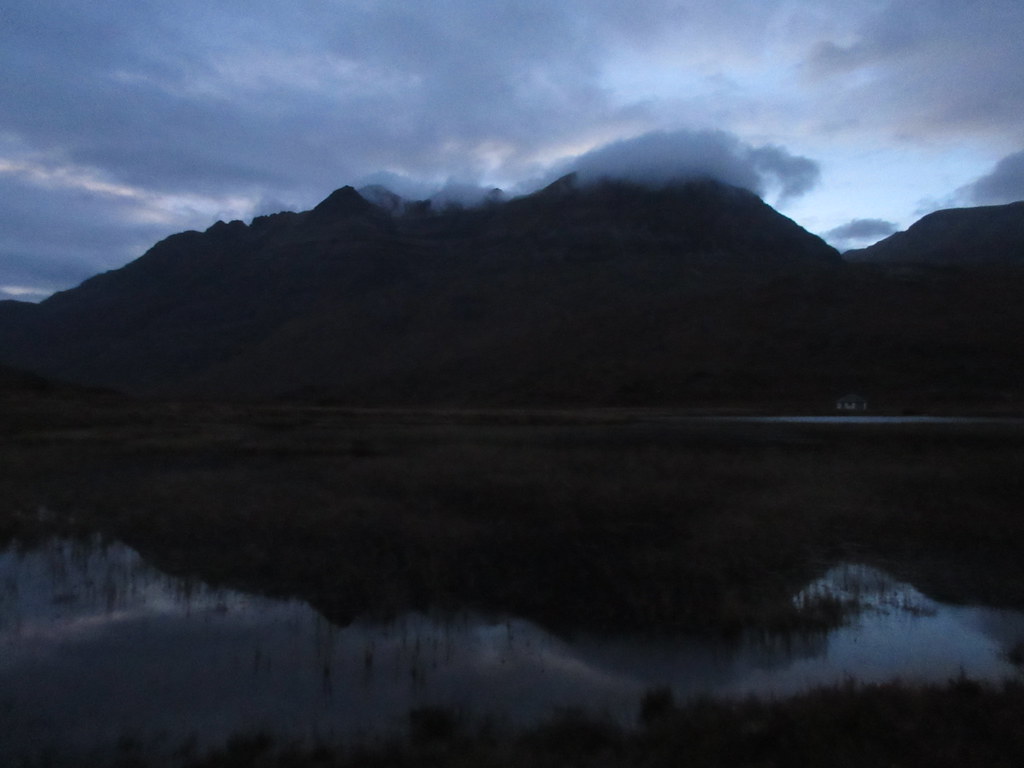 Not something that will go down as one of the most memorable days out this year, but a nice shift of the cobwebs in one of my favourite areas of the highlands.

Some great atmospheric pics of Liathach there, Malky.

And a good prompt for me to walk these two. The environment - solid geology, lochan Uaines, etc - looks fabulous.

I remember thinking the lochans in this area were fantastic spots. The whole area is wonderful, almost a moonscape at times, the way the rock pokes through like the bones of the earth.