Without getting into the "boring hills" debate again, I had set the three of the Monadhliath munros aside as the perfect option to transform the long day walk into an easy overnighter - well that was the plan

The benefit of doing it this way meant I would get to sleep longer than my normal work alarm! So we, Andrew and myself, set of from Aberdeen aiming for a 13:00 start.

All week the weather had been changeable but by Friday, Saturday appeared to be the bright spark on an otherwise overcast weekend. 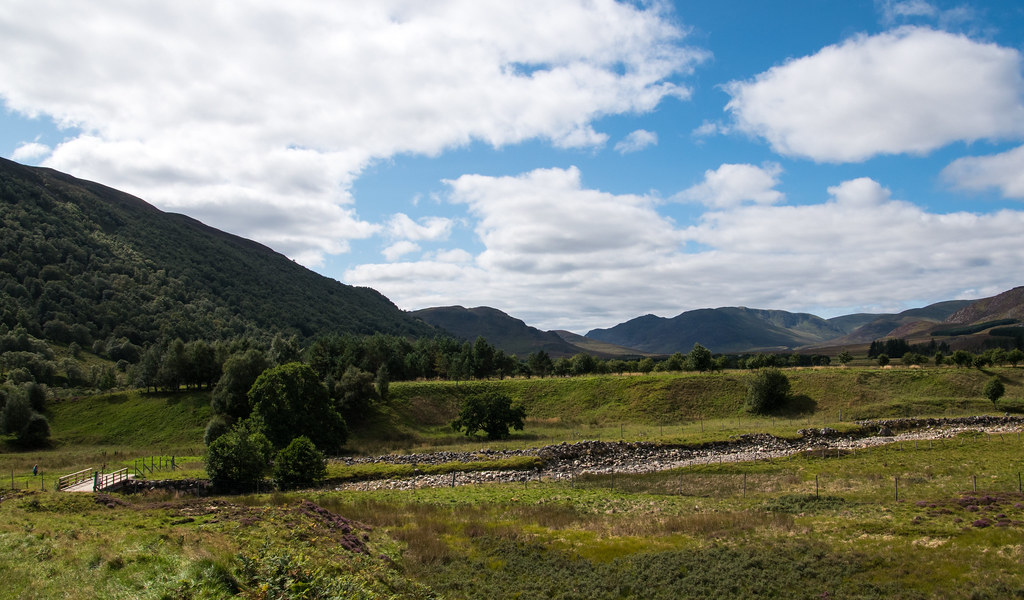 The brilliant thing about this circuit of three is there is so many potential camping spots... Assuming the weather plays ball!

As always we set off at our normal lighting pace, full of beans and enthusiasm. Other than what appeared to be a DoE expedition in the distance there was close to no one about.

Looking back along the track. 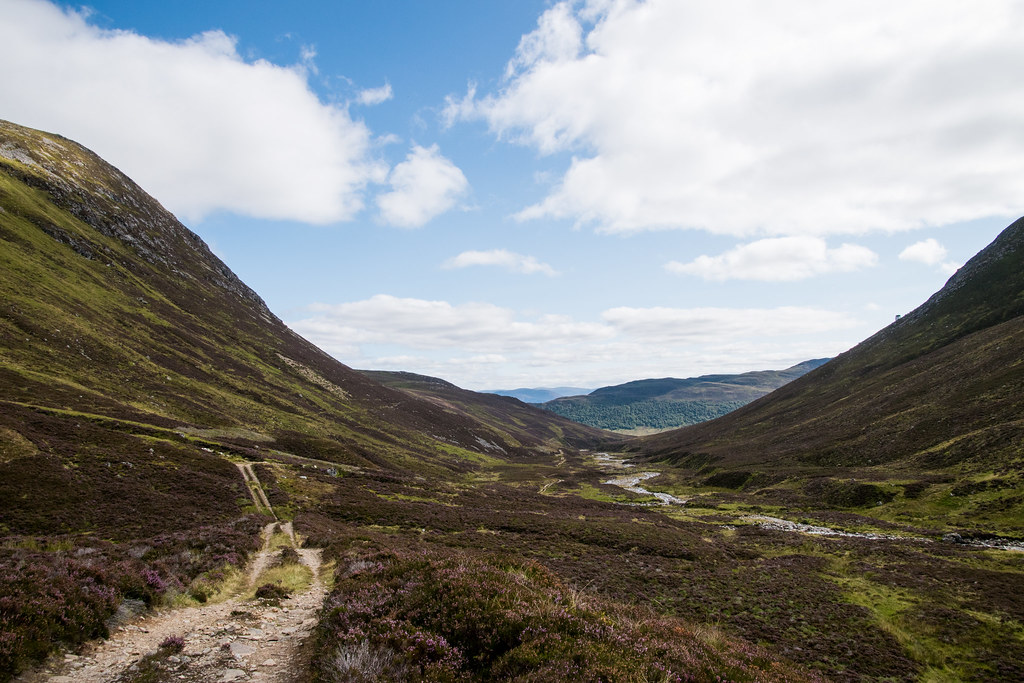 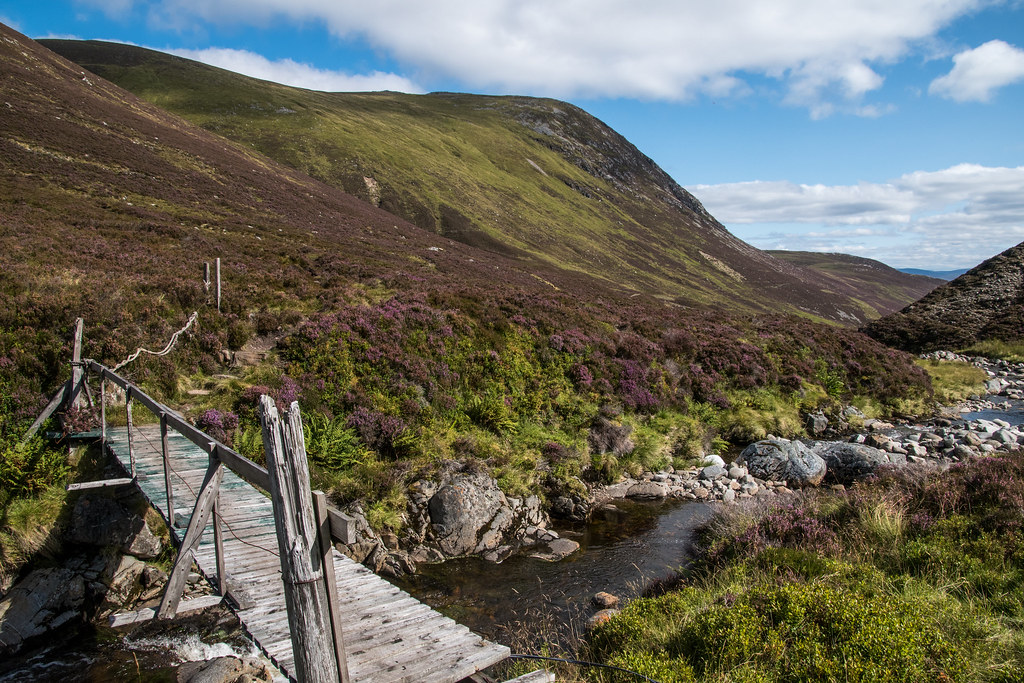 As the above photos suggests the first section most definitely lends itself to a quick start. Once across the burn the path quickly fizzles out and it becomes one of the infamous Cairngorms notorious bog mazes! I don't know if they are infamous, but they should be!

Carn Dearg is the first munro in sight and due to the "ramp" it looks attainable within no time... 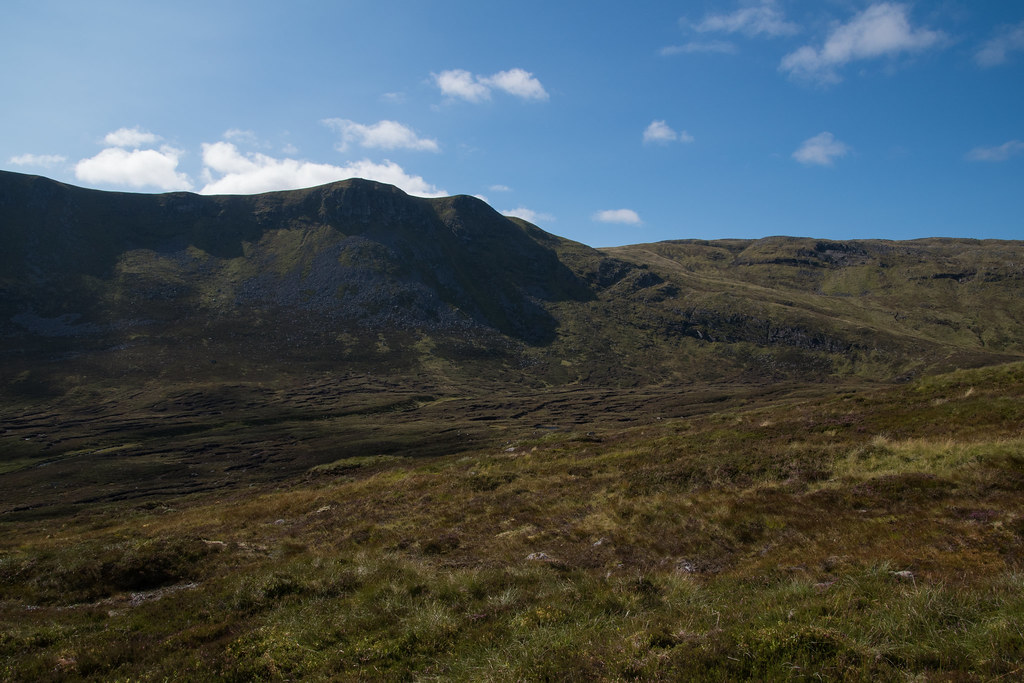 Closer to the ramp 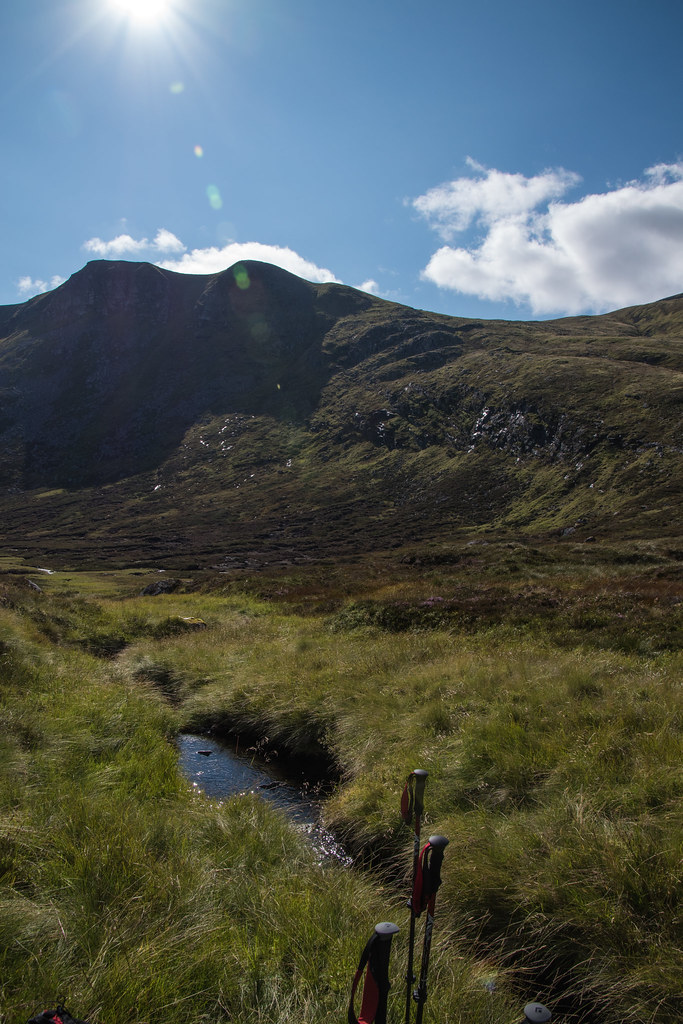 From other reviews it becomes obvious that if you are all about an 'impressive' summit then this is probably going to be your only hope for the day!

No I didn't ask Andrew to head first for scale, thankfully there was already someone have a food break on the summit 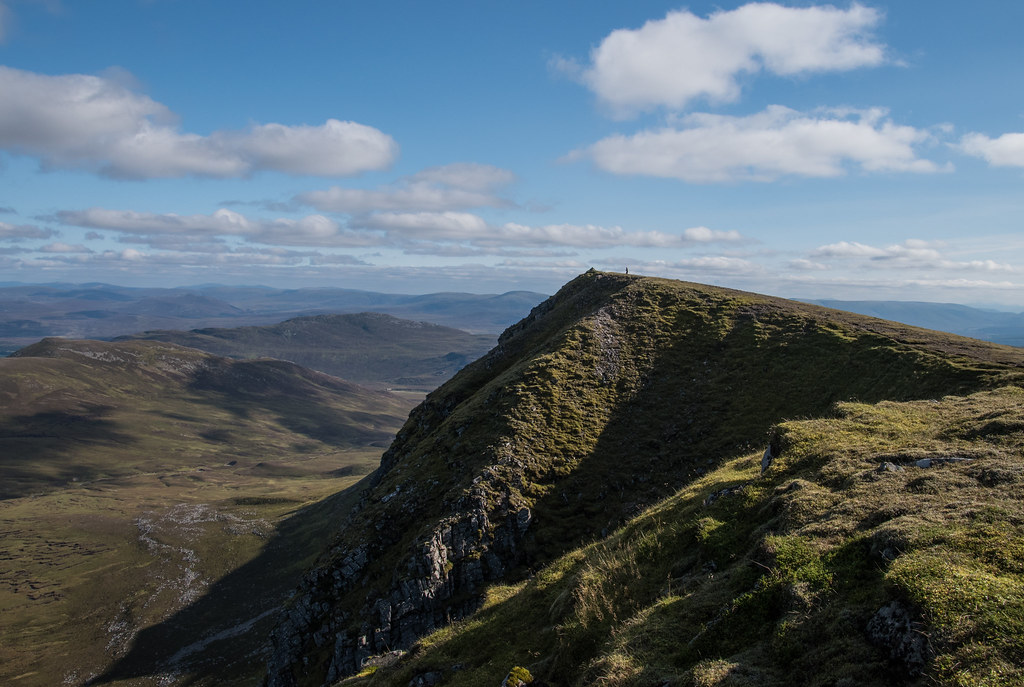 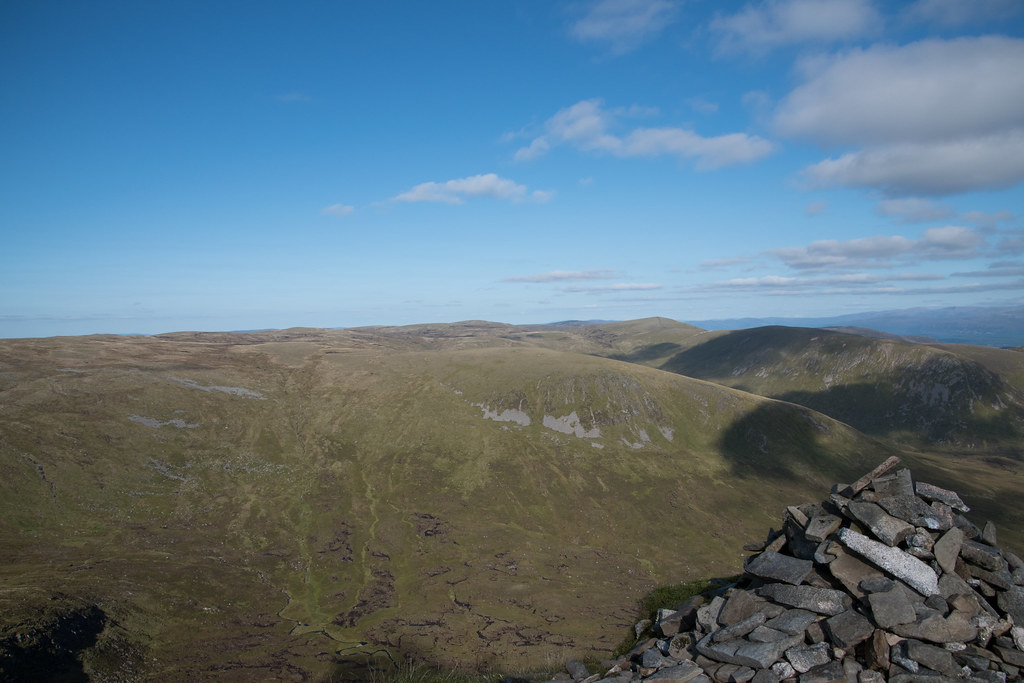 I struggle to accurately remember how long it took us to reach the top, but I remember thinking it was slightly ahead of schedule so we stopped, took in a bite to eat and enjoyed the surrounding vastness of nothing.

Fortunately for us within the vastness of nothing, there was another two munros hiding. I say hiding, they weren't really they were as clear as day just away, away in the distance.

The benefit was that we had done 90% of the days climbing so it was set to be an easy stroll and find a good place to pitch the tents.

. Hoping this was simply because we were so exposed we hoped to find some shelter before the minor incline up Carn Sgulain.

Carn Dearg away in the distance. 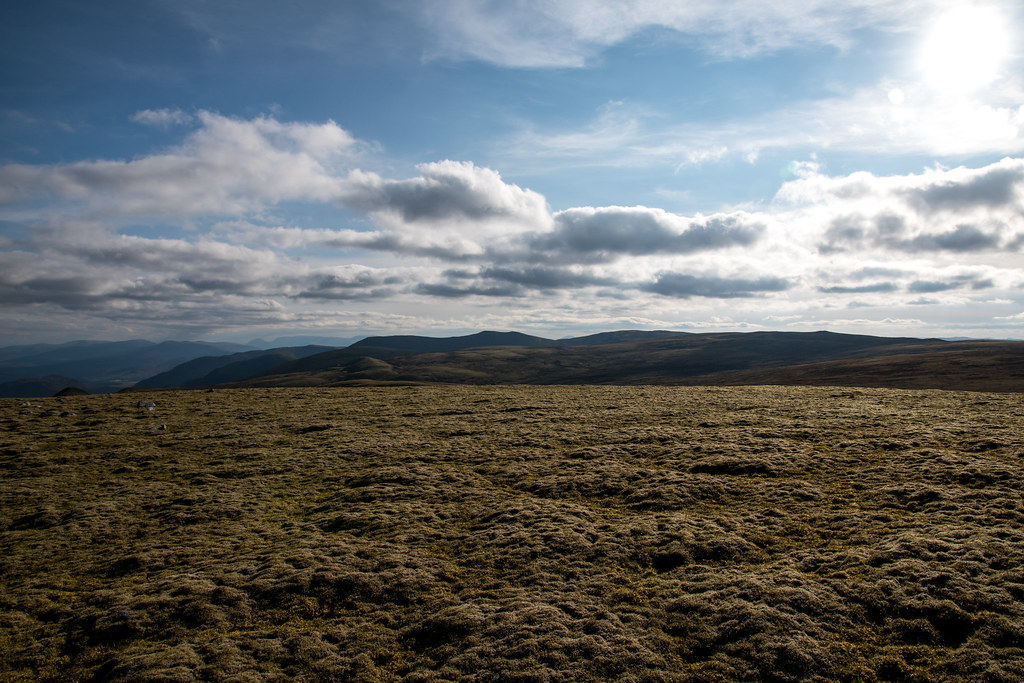 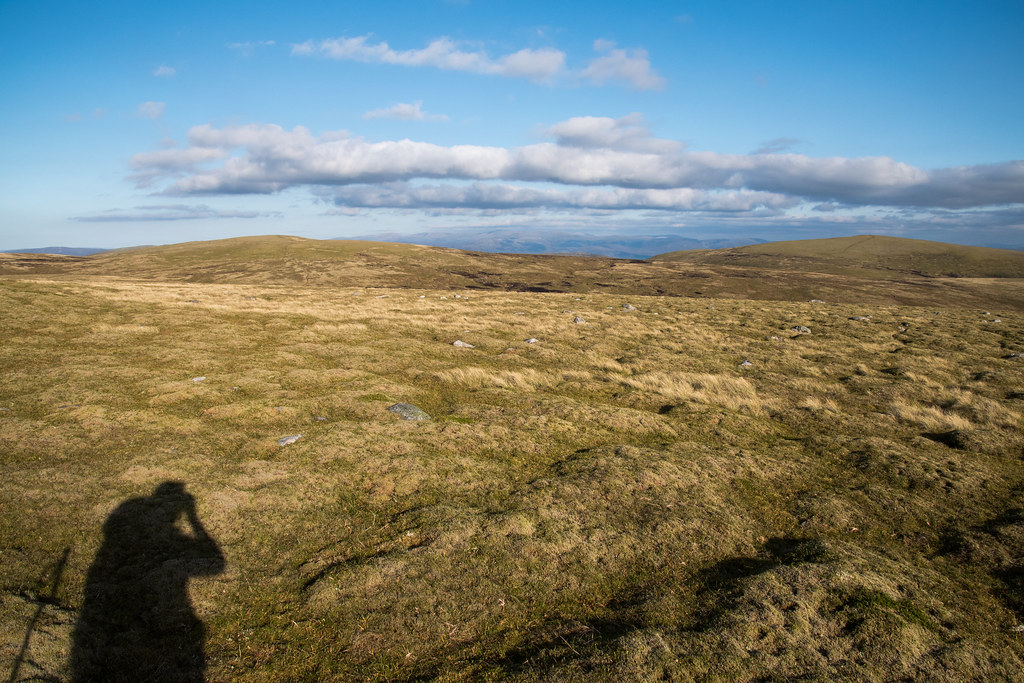 I think it was about this point in the day when Andrew mentioned how good a fish supper would be...

The thought lingered in our minds and when we had reached Carn Sgulain we made way towards A'Chailleach and hopefully to find a bit of shelter for the night.

The third and final, easily within reach. 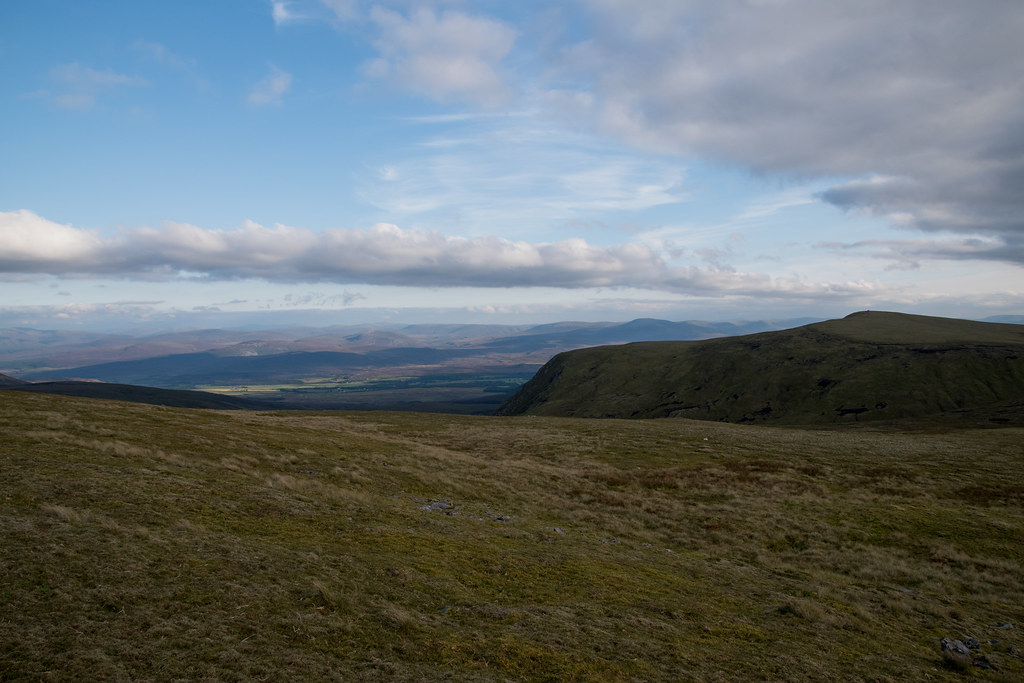 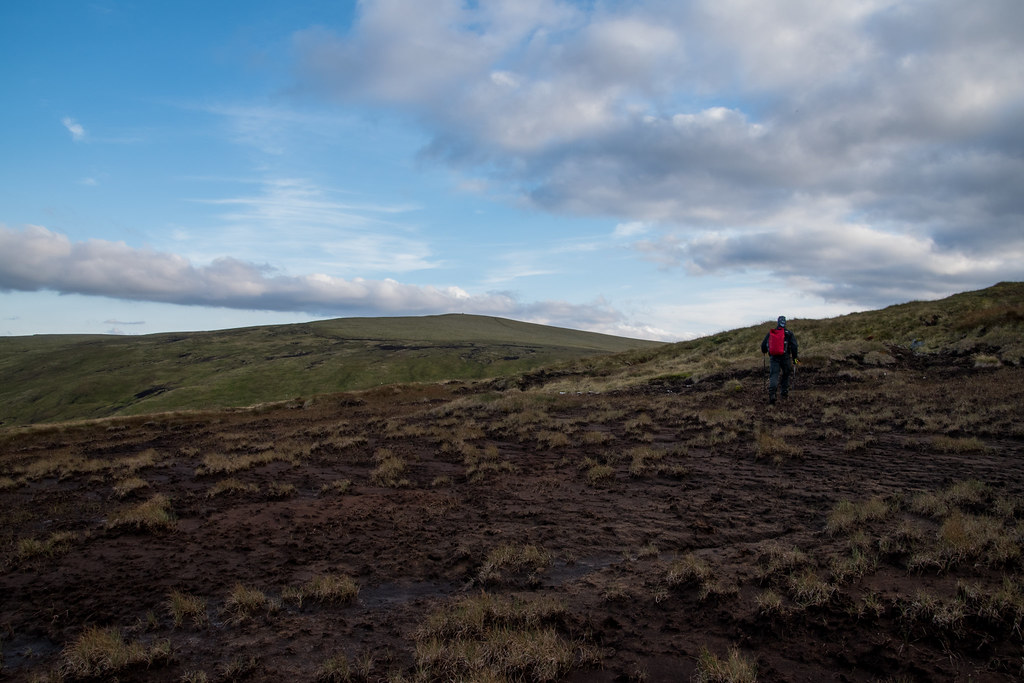 We made it down to Allt Cuil na Caillich, which offered the only potential shelter. It now became the decision, to set up tents or batter(or breaded) on.

To be honest I never thought we would have the luxury of that option by the time we reached here. The Walkhighlands time estimates are nearly always spot on, and I normally hit the long end of the scale.

Because we had only found shelter hidden away the overnight views and ability to watch the sunset would be limited - plus it was a guaranteed miserable Sunday.

Truth be told by now I was sold on the idea of reaching the illustrious fish and chips! It is amazing how this thought can inspire a quicker pace.

Summited A' Chailleach just as it was beginning to get darker. 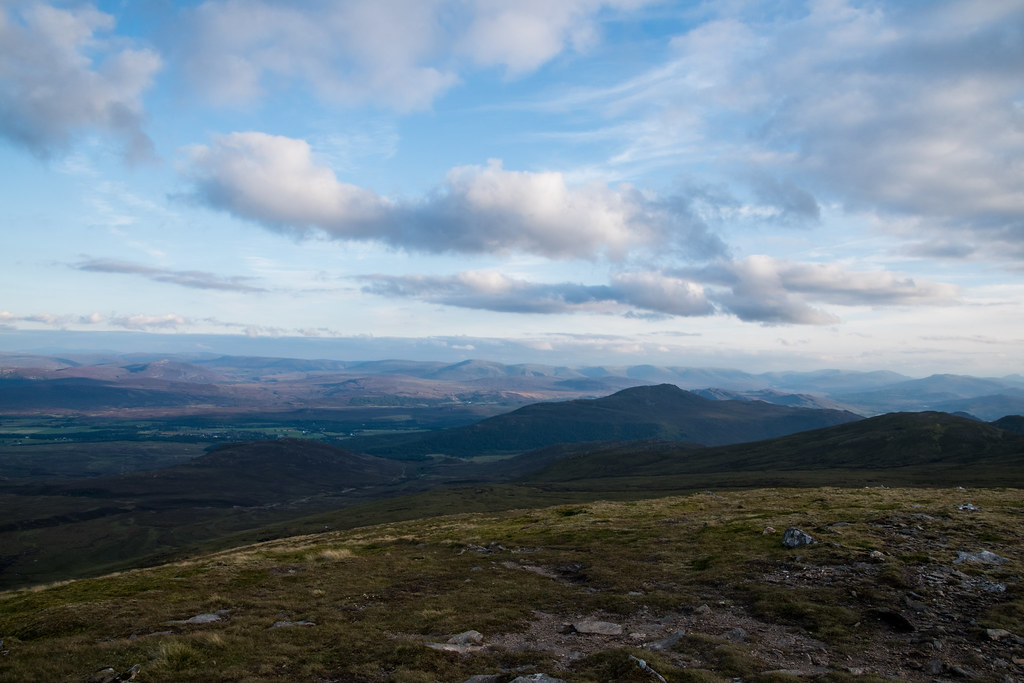 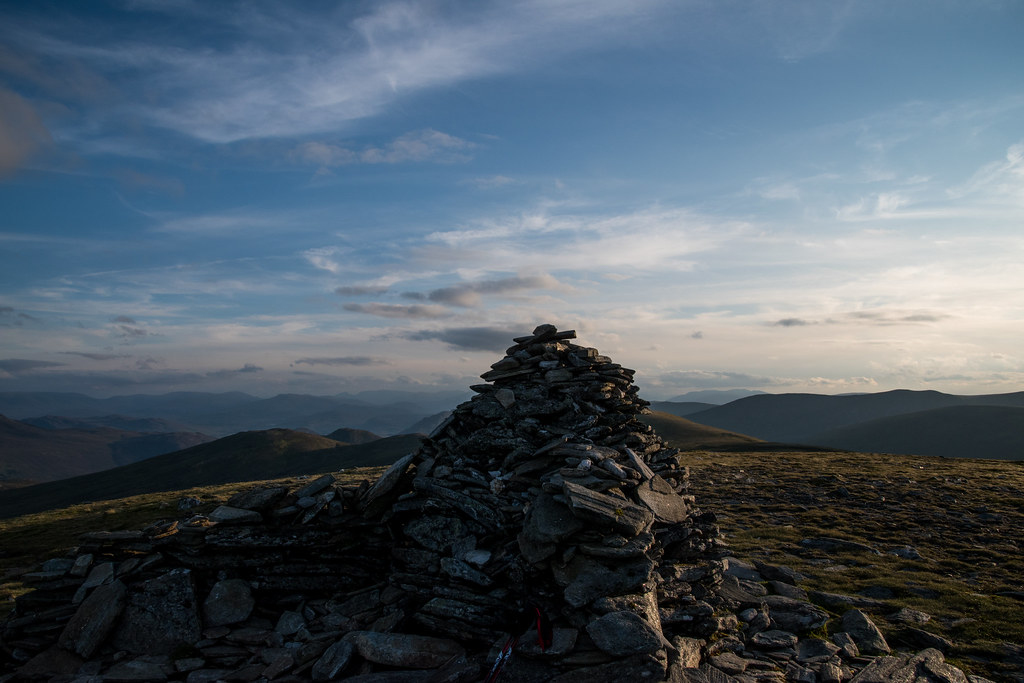 Obviously planning for the overnighter we had the head torches so the goal was to make it back to the landrover track before darkness and then it would be relatively plain sailing back to the car.

Is there anything better than being on the mountains at sunset? 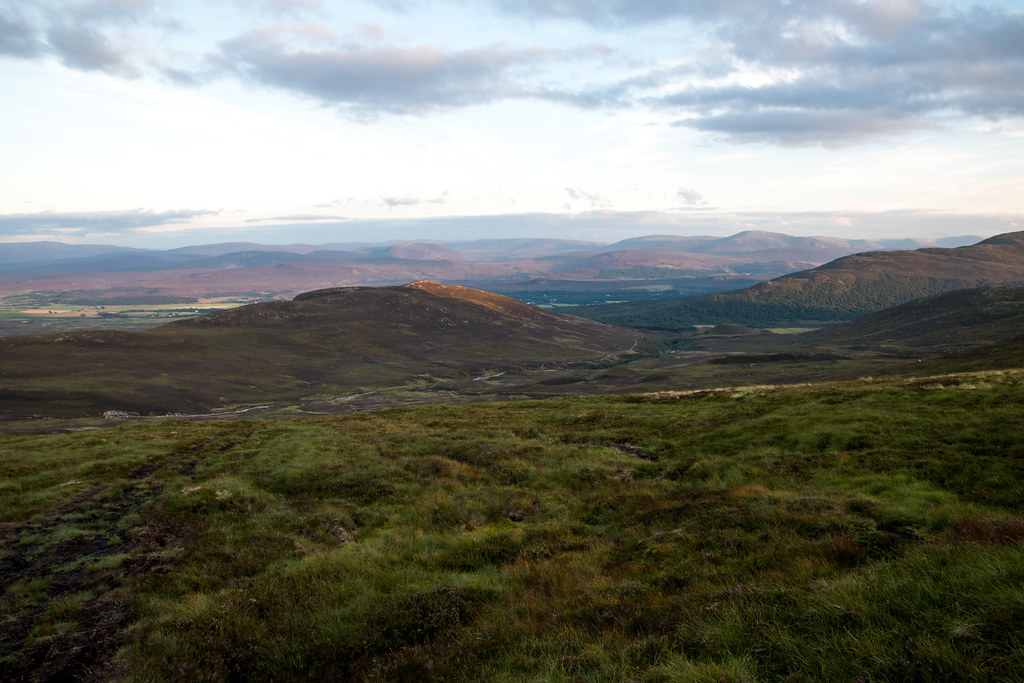 Managed off the hills with plenty of light to spare. 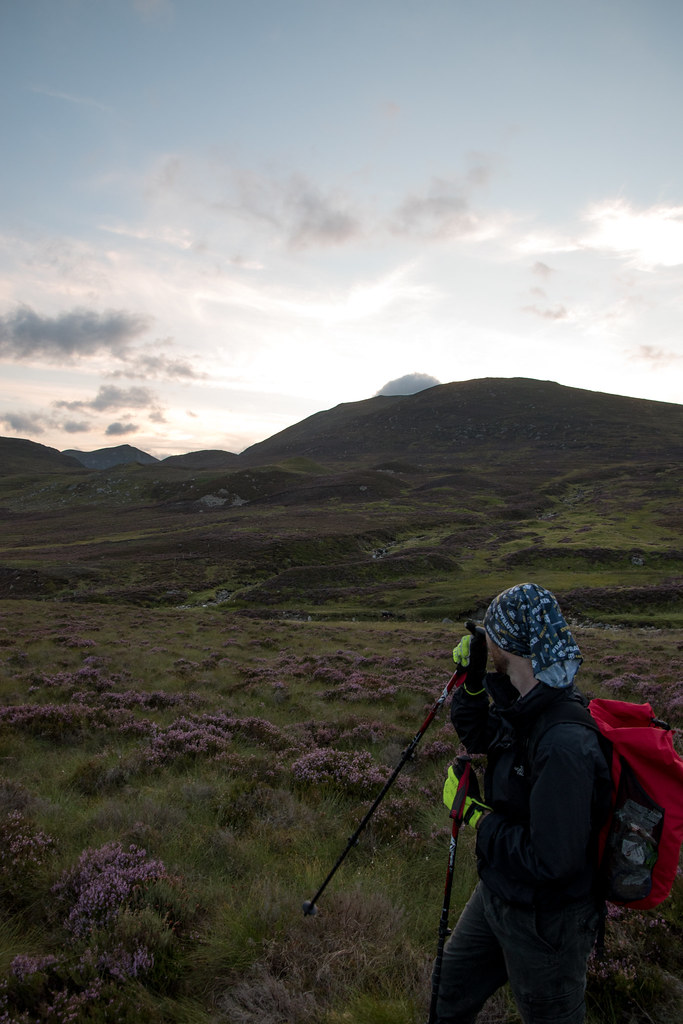 Similar to the start of the day, once on the track it was a swift trek towards the car. Maybe motivated by the idea of fried food might have played a factor on the way home.

Now I admit, we could have easily and (very, touch wood) safely camped, but I am 100% sure our call to abandon was the right decision. It would have been a windy, miserable and likely sleepless night - although not too cold it would have meant taking down the tents in the rain.

Although slightly annoying that we had carried all the kit for an overnight it made sense just to head back and try make it to Aberdeen before 1am. You could even argue carrying the heavier than normal packs was perfect winter practice.

It took us just short of 7 hours - very few stops and significant motivation not to hang about! 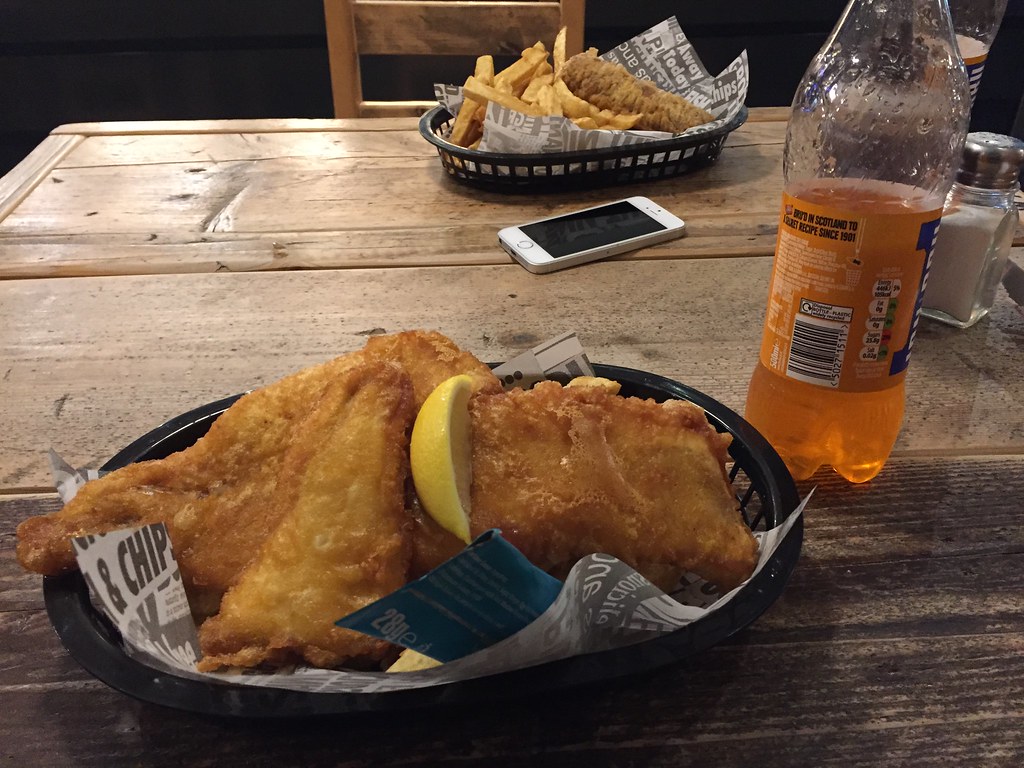 Massive shoutout to Joe's The Chippy on The Corner in Kingussie! We arrived at 20:59, unbeknown to us closing time was 21:00. Normal service in Aberdeen would be a snide remark at what time it is, thankfully it was the polar opposite - fresh fish cooked as they cleaned up the shop. Humongous portions and brilliant staff - would highly recommend for anyone out walking in the Aviemore region!

Full of fish, it became the challenge of staying wide awake enough to make it back to Aberdeen! Thankfully there was an abundance of energy drinks in the car and after an unexpected intoxicated taxi request I made it home by 0300.

Although not the hardest or most challenging undertaking, thanks for reading!

Re: Monadhliath 3 - Abandoning the Camp

Agree Joe's chippy very good. Was a bit worried about your abandoned camp - was having visions of blown away tents and misery !