I must admit this hurts a bit, writing a walk report a week and a half of "back to work" after a beautifal short week in Wales. Normally it makes me enjoy the afterglow, this time it just makes me ache and long back.

As we spent the day before Ophelia on Crib Lem and the day itself at South Stack, we decided to climb Tryfan and maybe some more summits the day after. The mrs really enjoyed the scrambling on Crib Lem, so I knew Tryfan was going to be good fun. I wasn't too sure though about Bristly Ridge, where I planned to go up Sinister or Main Gully. (It's not that I was doubting between the two, it's just that I don't know which one I've climbed in the past).

It seemed we might be the first to make an ascent that morning, as the parking place near Gwern Gof Uchaf was deserted.

The ascent went well. Some stones where slippery, the wind was still hard but not too cold and the mountain was quiet. We heard some voices here and there but we didn't see anyone till a bit higher up. The scrambling was all the fun I had promised the mrs 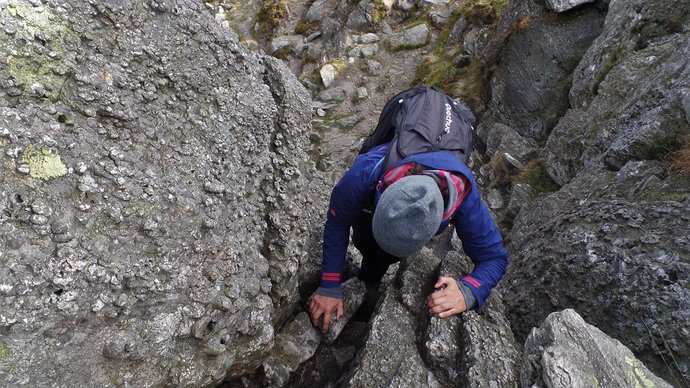 The sun by now coloured the views on the Carneddau, we were on the wrong side of Tryfan

All the more reason to steadily keep on scrambling. However much fun Tryfan is, and despite it's moderate ascent, there's still a lot of huffing and puffing. Every now and then there's need for a short pause. Adam and Eve offer some protection from the wind, so the summit is the perfect place for a slightly longer pause and a zip and a bite. What a magnificent little mountain it is I hope I'm not insulting anyone, but I can't hear the difference between Welsh and various Scandinavian languages. Either way, a very gentle man who spoke either one of the above to his children offered us a lovely romantic look at us being happy near the summit photo. 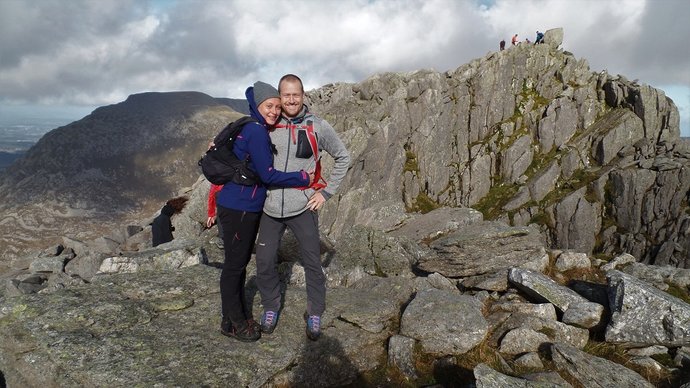 The mrs and I agreed on descending the south side of Tryfan and deciding there wether we would go for another summit. View from the south: And we did decide on going for Glyder Fach, via Brisly Ridge. Again, I don't know wether we took Sinister or Main Gully, but fun we had. This is the mrs making her way towards the gully And this is her, photo taken from inside the gully: 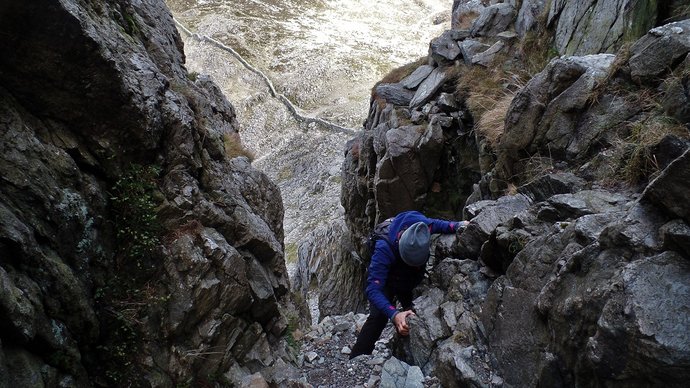 At a certain moment we diverted towards the right side of the ridge. This photo is taken from there, looking backwards at Tryfan The scrambling there is less technical, but no less fun: While having another bite on the summit of Glyder Fach, a coastguard helicopter hovered in the valley below. Apparantly a rescue of two climbers, that according to the mountain rescue website lasted around 75 minutes. The mrs didn't seem to keen on visiting Glyder Fawr and Y Garn as well, so we descended down the, might I say terribly eroded, scree path east of Bristly Ridge. Nice views on Tryfan though: You make it all look so easy. Had you carried on to Glyder Fawr by lunch, you would have met us.

You make it all look so easy

Haha, that's not the reputation I have at my local indoor climbing wall, where I'm known for making the easiest of movements look like a battle with the devil himself

Had you carried on to Glyder Fawr by lunch, you would have met us.

Now that's a real pity, would have loved to meet some fellow WH'ers. Never happened, but every time I've visited the UK, I've been hoping for it.

Enjoyed that. As did you, by the looks of it!


This remains one of my favourite days out in the British hills. Easily accessible, but truly dramatic and the amount of scrambling you can squeeze into a short walk is remarkable.

You can't imagine the fun we had. And I couldn't agree with you more, Tryfan is a fantastic mountain, full of interest.
Although Snowdonia lacks the grandeur of Scotland, the Norwegian highlands or the Alps, it is such a special place with a very distinct atmosphere to it. We visited the more southern parts as well this time and I simply love Snowdonia, even more now than after my first three visits, when I saw no more than the Carneddau, Glyders and Snowdon area.

This is such a good area for scrambling, isn't it? And so compact.

How come you didn't publish the pic of you jumping between Adam and Eve...???

Alteknacker wrote:How come you didn't publish the pic of you jumping between Adam and Eve...???

Because I jump faster than light