Durisdeer Kirk c1699
Today’s walk was with the folk from ARC with Scawd Law the objective, a Donald category at 663m This walk starts at picturesque Durisdeer village, via some very narrow single track roads, take care, some parking beside the beautiful church. The church is from 1699 and contains the original pews, need to look in next time if open. Its grandness is in tow with nearby Drumlanrig Castle. Like much of rural Scotland this area is steeped in history. Opening track Turn & Well hills on left
We then followed the slowly ascending farm track through some beautiful rolling border hillsides There are great views of Black, Turn & Well hills on the left. This track runs slightly higher than the old Roman road to Clydesdale, which can be easily seen below, also passing the old fortlet, dated to the Flavian period from metals found, whose grassy mounds also stands out clearly, today protected by a herd of coos, signs warning of the bull. Fortlet in the middle of snap
This area is a grouse moor and early on we sprung quite a few of them bursting out of the heather.
Above Well hill there were an unusually high number of birds circling including: ravens; red kites; buzzards, all scavengers, very odd but later we probably found out why. Durisdeer hill
After a short refreshment break, we tackled the steep ascent onto Durisdeer Hill. We followed the fence for a while then opted to follow a quad bike trail up the slippery, muddy slopes, but I have had a lot worse terrain recently.
The weather was very good considering the forecast with excellent all round views. Nearing the top of Durisdeer
From there we follow the fence line across the open moorland ridge heading to Little Scaw’d Law and then Scaw’d Law itself, today’s highest point. You could take a more direct line across the moor but really unless you need to save time just follow the fence, particularly if the weather closes in. At the top no trig, nor cairn so GPS reference taken to confirm highest point. Looking back to Well Hill
Again time taken to take in and appreciate the views. To the south the Solway & Criffel. To the west the Galloway ranges. Just to the north Sanquhar and eastwards the Moffat range, quite spectacular. Estate track to Wedder Law
More red kites can be seen along with a few hares, coats already turning whiter.
Next we drop down to cross a track and make the short climb onto Glenleith Fell. 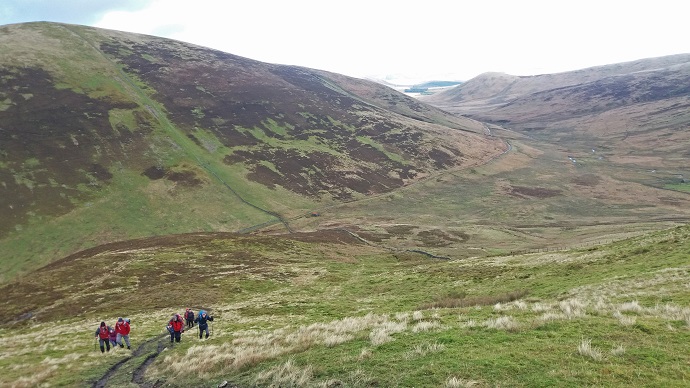 Typical landscape, Well hill and the pass to Clydesdale
The moorland walking is awkward enough but the amount of old wire left behind by the fence builders, to trip you up is disgraceful, shoddy workmanship.
This is followed by a steep grassy descent to the shooter’s bothy near Blackhill Moss, where we had our lunch break. A scenic spot particularly in this weather, otherwise indoors. Death valley
Just as we finished eating two land rovers drew up and out popped a gang of guys with flags, beaters for a shooting party. Despite us contacting the estate beforehand and being told no shooting today, there obviously was and they would not let us walk down the track until the shooting was over. We could have forced the issue but why take the aggro, we are here to enjoy ourselves. The weather had changed for a thankfully just a brief spell: very windy; very cold and some rain, not the time you wanted to be hanging about and I had forgot my gloves so cold hands.
We walked slowly behind some beaters, it turned out to be a partridge shoot. There were plenty of beaters and plenty of dead birds. Considering how low the birds fly the shooters can hardly miss them, firing a spreading buckshot into the sky. Slaughter not sport. The number of carrion birds were again evident looking for the missed carcasses. Would the many Labradors and spaniels criss crossing the ground leave them any? Autumn sun and rolling hills
I suspect that they had been shooting earlier nearer the beginning of our walk hence the large number of carrion eating birds spotted.
Slowly we descended the Glenaggart track (valley of death for the partridges) until the shoot was over and then back to Durisdeer. Blue skies once again. Durisdeer village
Looking at the graveyard some of these stones are ancient, circa the original construction? A few interesting stories on these stones, another reason to spend some time here.
Overall a really good walk in a beautiful part of the country and as always good company and chat to pass the time.