All alone on Wedder Law

All alone on Wedder Law


Wedder Law Hill of the Lamb
Donald 672m
I was intending to go on a group walk today but I had a horrendous sleep, unusual for me, and got up feeling rather washed out. Rather than potentially hinder the group I decided on a solo trip to Durisdeer and go up the Donald, Wedder Hill.
I knew when I started that this was going to be hard going and it was, biorhythms or what but my body was not really up for this walk. The Kirk is creepy enough
BUT, in saying that, I really enjoyed the trip, despite the sweat and aching calves.
I parked at the Kirk, walked back down the road until the last house then turned left and followed the track heading to Glenaggart until you cross a burn. 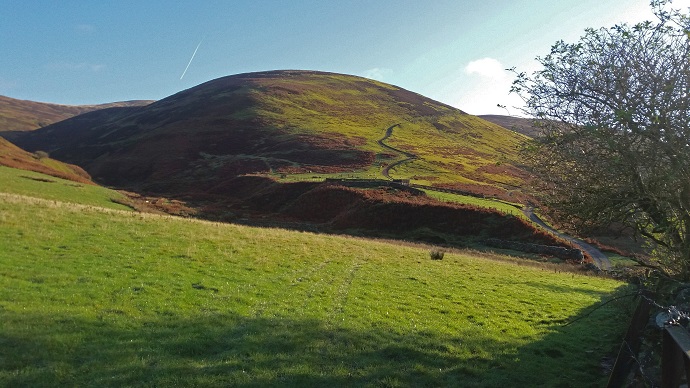 Scarred hillside
There is an obvious estate track scarring the hill which I doubt got local planning consent. However, I knew that I was following this all the way to Wedder hill so should not complain too much.
The track twists and winds its way upwards, constantly and unrelentingly climbing for just over an hour. I was feeling it and took frequent advantage of the views to give myself an excuse to take small breathers. Zoomed Drumlanrig Castle
The skies were blue and the surrounding hills just majestic in this light. Down in the lowlands fog patches had not yet cleared, Drumlanrig castle can be seen partially hidden in the gloom.
To my left the top of Black Hill appears and further behind the Lowther hills with the radar ball standing out against a blue sky instead of last weeks grey. Golf ball on Lowther Hill
Talking of last week I was surprised at how many partridges survived last weeks shoot, they were popping up everywhere today, particularly on the lower slopes. The scavengers were also flying; ravens, red kites & buzzards but not in the numbers of last week. Straightforward track to follow
The track winds past some great named hills: Whiteside shoulder; Farthing Rig; Crookedside Hass; Blackgrain shoulder; Smuring hags; Brown Dodd, there must be great stories about these names.
It has taken me just over the hour and I am flanking Scawd Law with the track to Wedder hill straight ahead. Wedder Hill view before descent
However the hard work is not over, there is a descent of around 300ft with a further 500ft of ascent to reach the fenceline on top of Wedder Hill. The top is on the left of the fence, just an open plateau, no cairn, a few iron posts, so 10 minutes tramping about through the moss covered all of these to ensure top covered.

Wind turbines en masse in Clydesdale
The huge wind farm down in Clydesdale is just another example of politicians destroying our landscape. Still, try your best to ignore it and take in the beautiful unspoilt areas. Weather front coming my way
The weather had changed, now a bitter northerly wind, with winter wind fronts blowing through but luckily none descended on me.
Too cold to have lunch here so now a leisurely stroll back the same track taking in the views, map out to check future walks. Not one soul to talk to but I did think I spotted someone on top of Ballencleugh Law. Patchwork grouse moor hills
Out of the wind I had my roll in a stunning spot looking up Glenaggart to the bothy at Kettleton Byre. Across the way the huge gully between Nether hill and Rottencraig head rather prominent along with the many partridge breeding pens and feeding areas, really tame birds bred for the slaughter. Partridge feeding pods all around
A final stroll back down to the car where I was happy making solo trip that was just enough today. After changing I popped into the Kirk and visited the Queensberry marbles. Queensberry Marbles
I wonder how many walkers have visited Durisdeer and never popped in, missing out big time. What a stunning place and what history the small area has.
Ascent: 2270ft (692m)
Time: 3.33
Distance: 7.27m (11.7km)