"Did you see that Thing on the t-Seallaidh?"

"Did you see that Thing on the t-Seallaidh?"


After a stressful week at work of getting various documents ready for a forthcoming inspection (about as much fun as it sounds, really

), I had taken an Annual Leave day on Wednesday 25th October with hopes of getting a walk in if the weather was halfways decent. As luck would have it, my old pals Pam & Gary were just back from a fortnight of heavy-duty windsurfing in Tiree and were also keen to get a wee walk in on the Wednesday, and their friend Alix who currently doesn't work Wednesdays thought that she might tag along too. Now, the three of them are all scarily fit, whereas I'm very definitely not in that category, so I suspected (correctly, in retrospect) that I'd be in for a bit of a showing-up

. All the same, I reckoned that the inevitable humiliation would be well worth it for the company, and after some Email negotiations we decided on that rather fine pair of Corbetts up at Lochearnhead, Creag MacRanaich and Meall an t-Seallaidh. By all accounts MacRanaich should be an impressively craggy wee hill, while the more rounded Meall an t-Seallaidh (rather improbably pronounced something like "Melon Telly" according to Ron Turnbull's "Loch Lomond and the Trossachs" Cicerone guide

) should by all accounts boast fine views down Loch Earn. Anyway, they were new hills for all of us, and we were keen to give them a go.

our_route.gpx Open full screen  NB: Walkhighlands is not responsible for the accuracy of gpx files in users posts
The forecast was a bit mixed, with some blustery showers in the morning set to develop into more persistent rain by mid-afternoon, but we decided to go for it anyway. At least it wasn't too long a drive, and in no time we were setting off from the big car park beside the public toilets at Lochearnhead. The walk proper starts off up the lane beside the rather picturesque Episcopal church, then through a gate to join a well-engineered cycle path that zigzags up the hill - National Cycle Route 7, I believe - to eventually join the higher of two disused railway lines, where we turned left along another good track.
Gary pausing for a map check at the first gate: 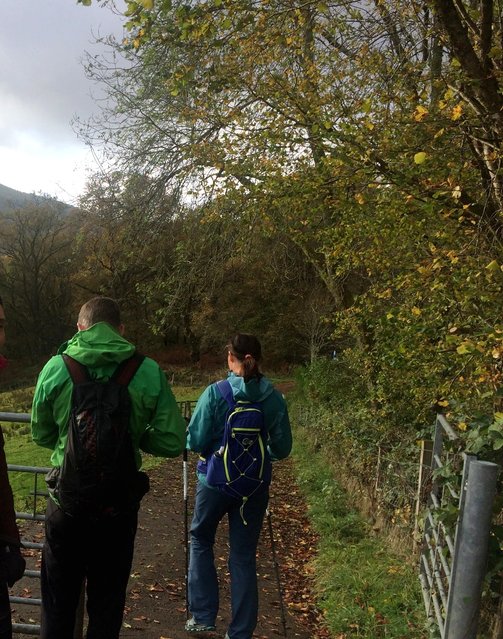 As the track along the higher disused railway line heads westwards, it passes under an old railway bridge. At this point, we branched off left (somewhat counterintuitively) on a side track that crossed OVER the bridge to head up Glen Kendrum.
Now, do you think I should get myself a pair of lycra breeks like those ones that Alix is sporting here? (Only kidding - please don't have nightmares 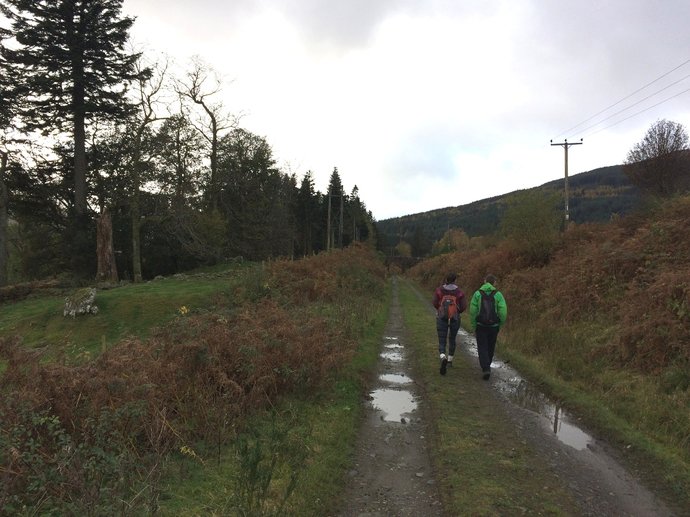 The other three now set off at a blistering pace up Glen Kendrum, and I was already struggling to keep up. (All that lycra no doubt cuts down on air resistance, I suppose

.) However, the track up the glen is in very good nick all the way up to the bealach between the two Corbetts, and it made for rapid progress at least. 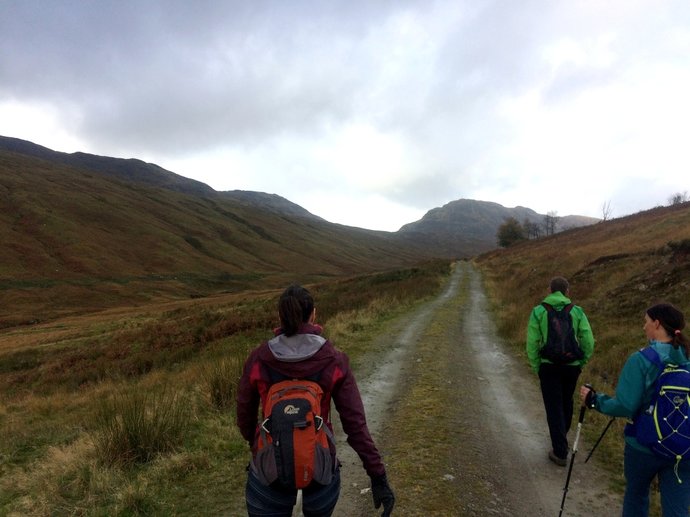 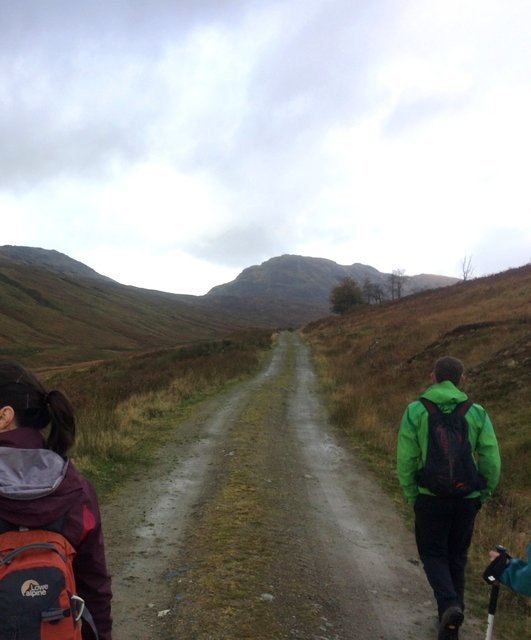 As we got further up the glen, there were interesting views back southeast towards Ben Vorlich and Stuc a'Chroin: 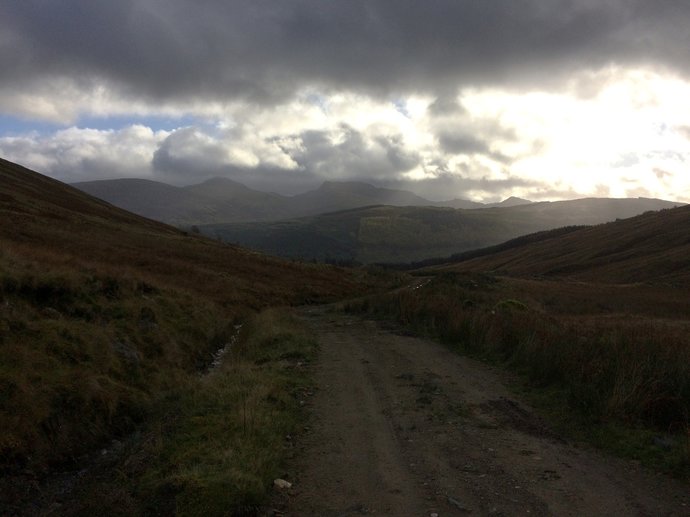 Getting close to the bealach now, and MacRanaich really starting to look quite impressive: 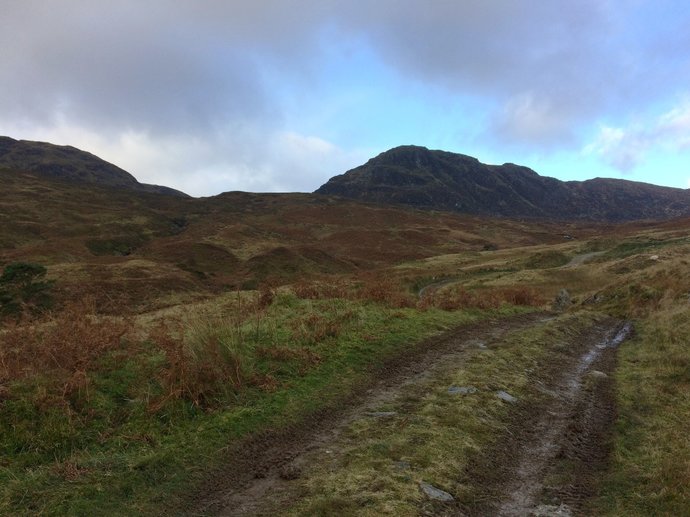 In his Cicerone guide, Ron Turnbull suggests a long horseshoe route taking in MacRanaich's long and lumpy southeastern ridge as far as its craggy sub-top, Meall Reamhar, and that certainly looks interesting from this viewpoint. However, we were planning on the more usual smash-and-grab approach of bagging MacRanaich by a round trip from the bealach, followed by (in theory

!) a more leisurely traverse over Meall an t-Seallaidh and back down its southeast ridge, as per the website's route description. 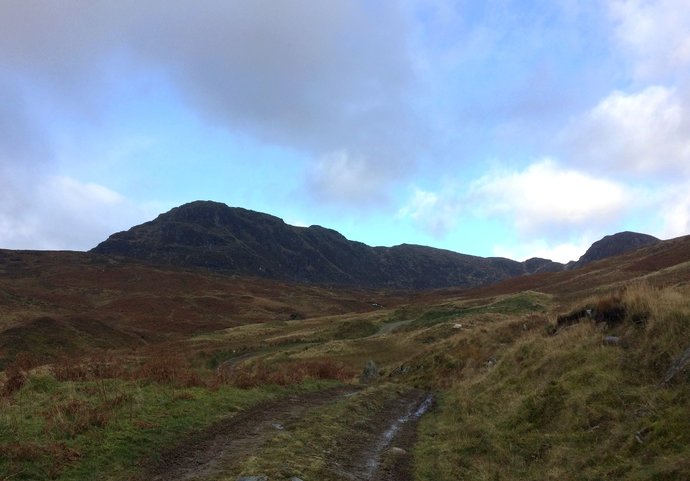 Up at the bealach now, and Creag MacRanaich not really looking any less steep, but at least it was now easier to see how to pick out an ascent route on steep grassy ramps up through the crags. 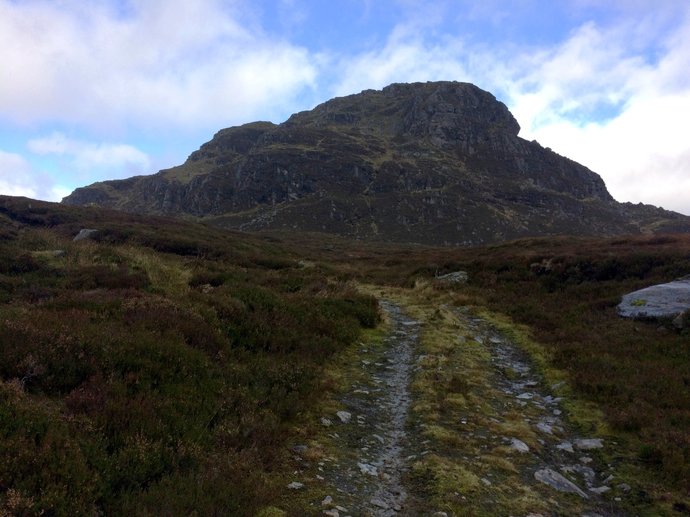 Off we set, and of course ere long I was trailing the other three, despite my best efforts. I just kept at it though, and the rest of the party hadn't receded TOO far into the distance before I finally managed to haul myself up onto MacRanaich's southern top and then over a shallow bealach to the marginally higher main summit to the north. There was a nice hazy view back down to Loch Earn from the summit cairn. But where were the other three 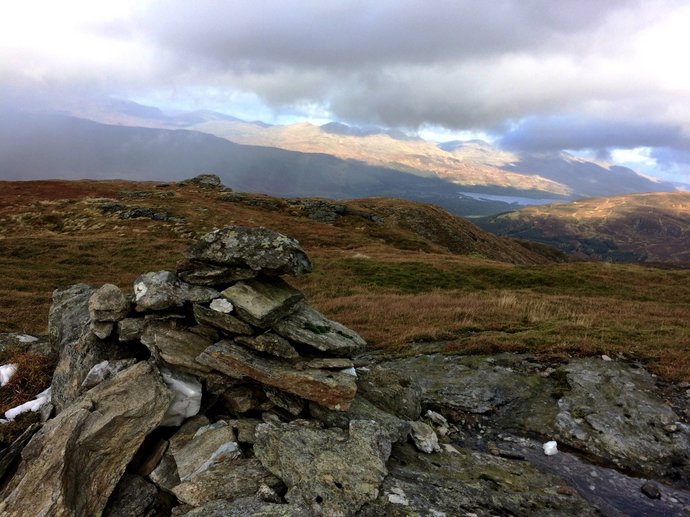 Aha! By the looks of it, they'd had plenty time to find a somewhat more sheltered spot for a lunch break 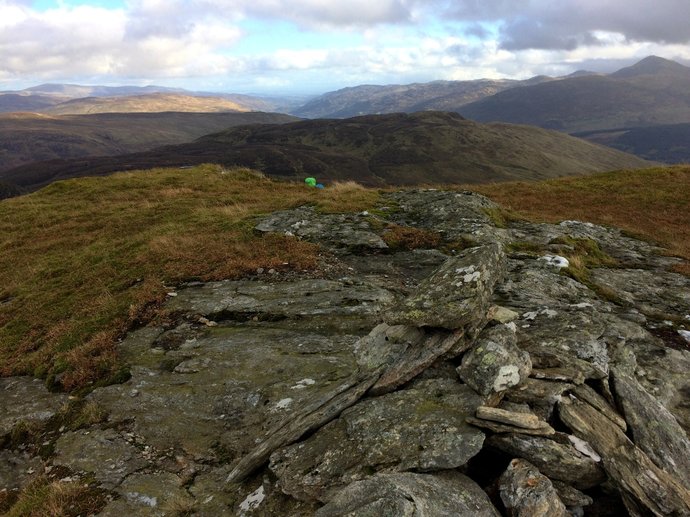 We all stopped to munch our assorted sandwiches, enjoying a fine view back down the glen towards Ben Vorlich and Stuc a'Chroin. 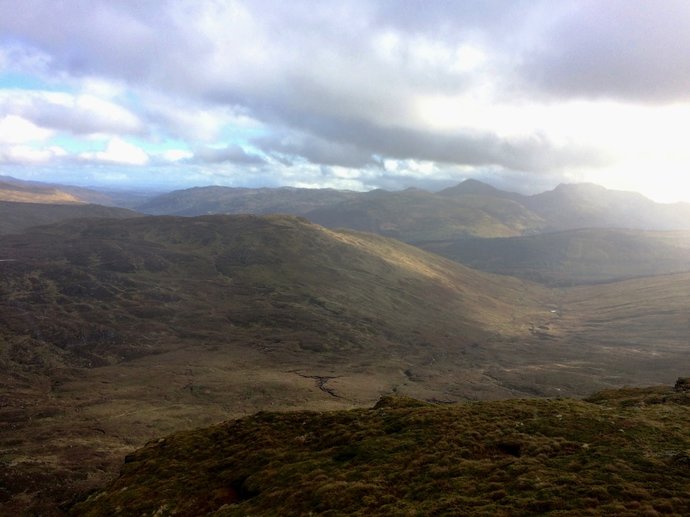 There was an interesting view to the east, too, along MacRanaich's lumpy ridgeline towards Meall Raeamhar. 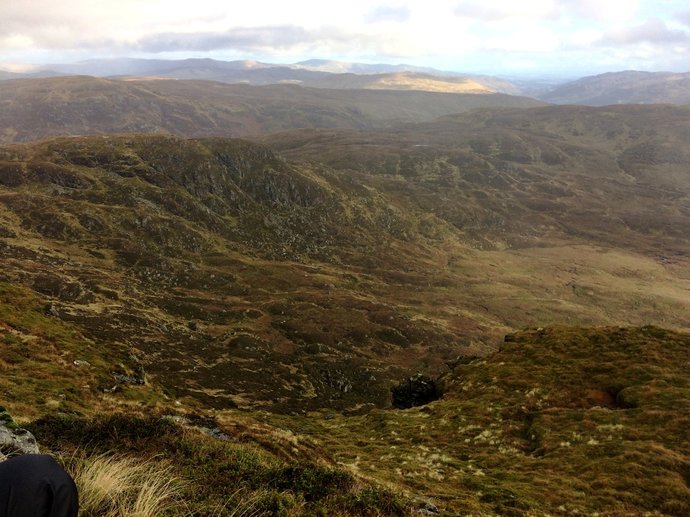 With lunch eaten, we set off again on the descent back to the bealach. It was no less steep than it had been on the way up, and I gave myself even more work by descending a bit too quickly southwards from MacRanaich's southern top, thinking that I could traverse round, but then realising (after a polite hint from Alix above me) that there were crags in the way, so that I had to climb back up and over. Eventually, however, we all made it back to the bealach, more or less in once piece. There was the usual inevitable peat-haggery at the boggy bealach (why do those two words "boggy" and "bealach" seem to belong so naturally together

?), which we all eyed with some trepidation. 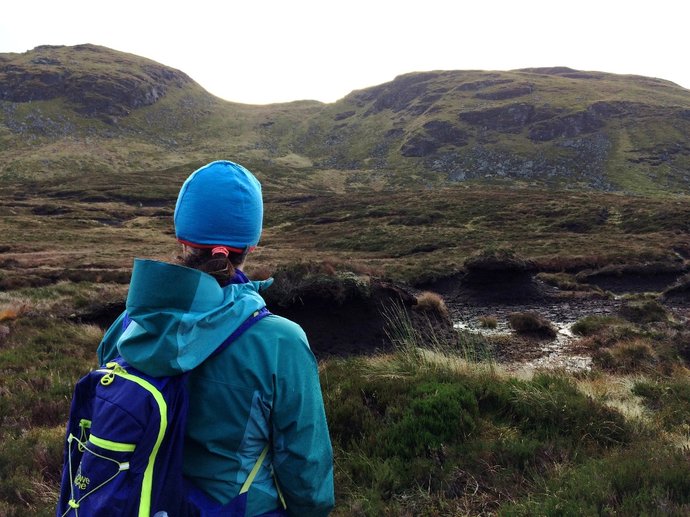 Fortunately this wasn't quite as bad as it initially appeared, however, and we were soon making our way up to the fairly high bealach between two of Meall an t-Seallaidh's northern tops, Cam Chreag and Meall and Fhiodhain. It wasn't nearly as steep as Creag MacRanaich had been, but I was frankly knackered by now, and I made heavy weather of it. At least there were some good views back the way, however. Here's a hazy shot back to Creag MacRanaich with a nice wee bit of rainbow: 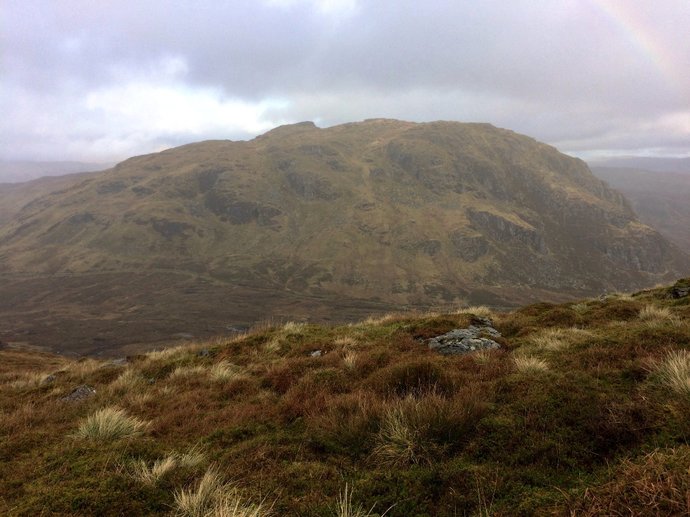 And a clearer shot a couple of minutes later, with MacRanaich showing off its crags well from this angle: 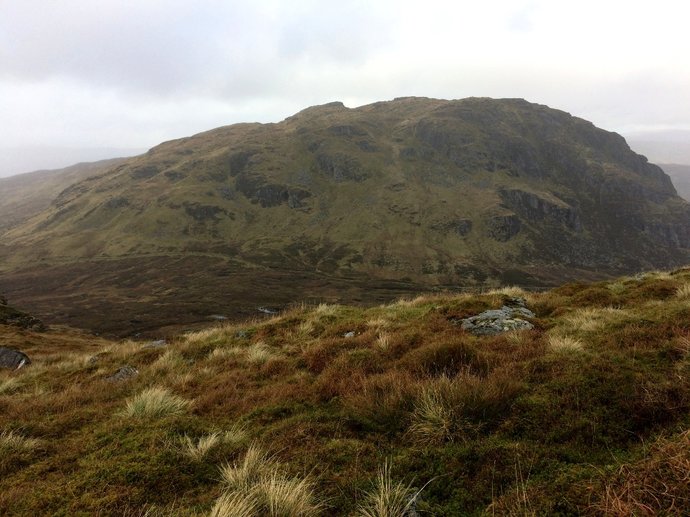 After a brief levelling at the bealach, we started up the steeper final section onto Cam Chreag. I was really struggling by now, and to make matters worse, one of my trekking poles chose this moment to buckle and snap, landing me on my backside

. After assorted curses, I got back on my feet and - eventually - made it to the top of Cam Chreag. From here on, things fortunately got more pleasant, with traces of path and a line of old fenceposts eventually leading onwards along the undulating ridgeline to Meall an t-Seallaidh's summit trig point.
As promised, the view back down Loch Earn certainly didn't disappoint 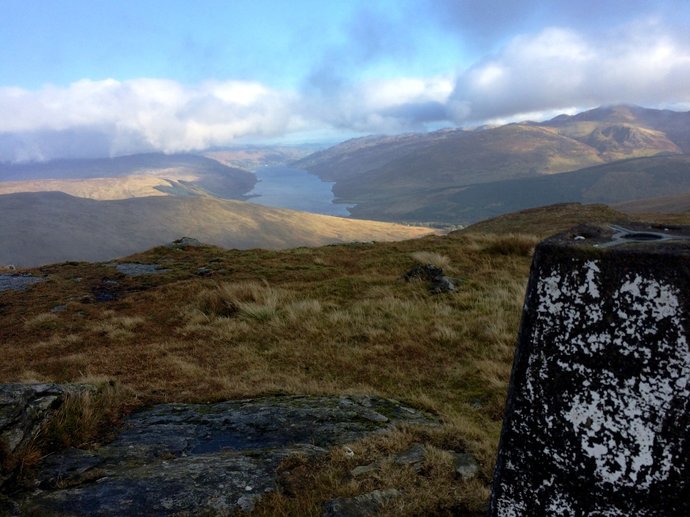 But once again, where were my three partners in crime? 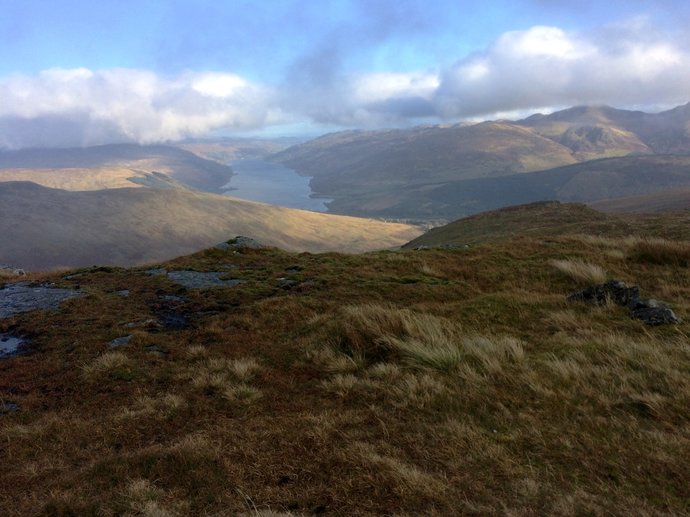 After a minute or two, I again spied them in a nice sheltered nook just over to the south-east (predictably enough, they'd had plenty of time to find a good spot

!) and I headed over to join them for a very welcome cup of tea and a biscuit.
As we drank our tea, a band of rain swept in, but at least this created a lovely double rainbow over Seallidh's summit trig point: 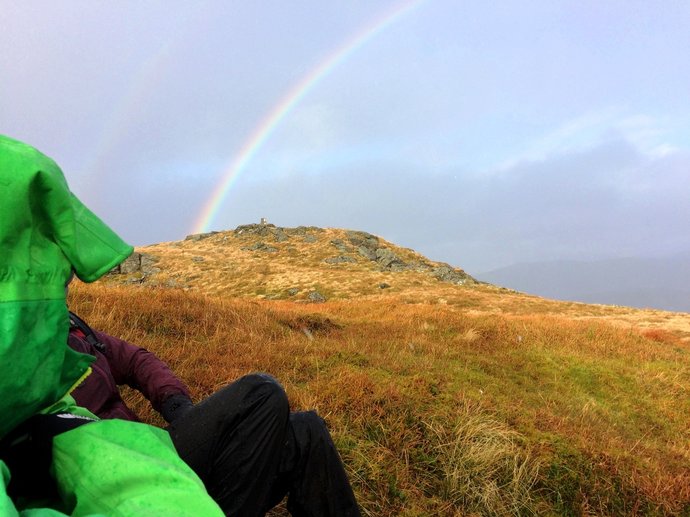 And another nice rainbow on leaving Seallaidh's summit environs, just before the rain really set in for earnest: 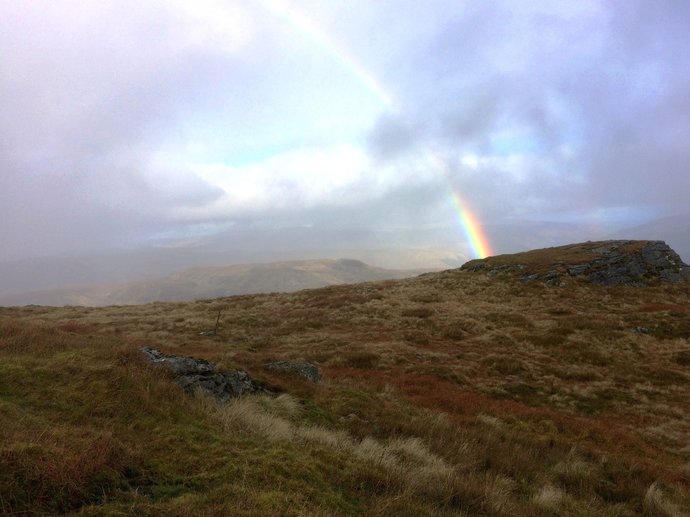 From here on in, however, we got a bit of a drenching as we headed off southeast down the continuing ridge. A shame, really, because this would have been a great ridge walk in good weather, and it was still surprisingly enjoyable even in the driving sleet

. I was really pretty wabbit by now, however, and although I was still enjoying myself, there was no way that I was able to keep up with the other three. They did their best to hang back so that they could at least see that I was managing to get down OK and not wandering off-route, but I was aware of them gradually receding into the distance ... By this stage it was a straightforward enough descent, however, down a second line of old fence posts heading more directly down eastwards into Glen Kendrum, and then skirting the northern edge of a big patch of forestry lower down. This looked as though it would have been hard work in the summer, with a lot of unavoidable patches of bracken, but at this time of year it was straightforward enough despite my knackeredness. More fine vistas over Loch Earn, too 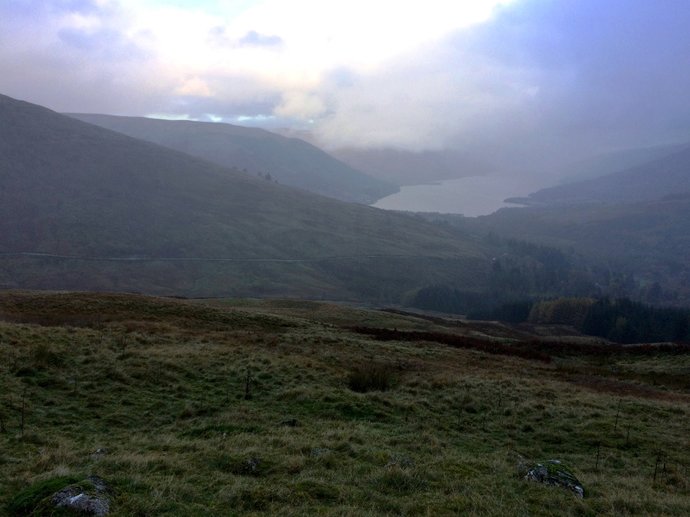 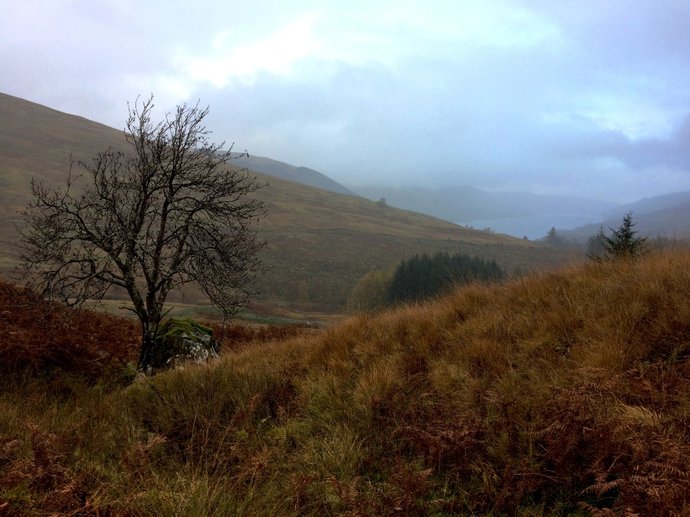 I met the rest of the party towards the bottom of the patch of forestry, where they had found the start of a promising-looking forest track. We duly headed down this, taking a left turn at a track crossroads as we came out of the forestry, to eventually pass Edinchip Farm and re-join the top of the lane leading back down to the Episcopal church in Lochearnhead. We were all fairly drookit by now, and it was something of a relief to get back to the car and change into what dry clothing we could muster before heading down the road for a very fine dinner at 'Mhor 84'.
I'd have to admit that I found these two hills more challenging than I'd expected (the more Corbetts I do, the more I'm coming to realise that they're often harder than the Munros

!). However, they did undoubtedly make a very fine round, even in 'iffy' weather

Re: "Did you see that Thing on the t-Seallaidh?"

Remember saying to myself in the mist . " this ain't the summit - there's another cairn somewhere a wee bit higher".
It is imposing as you're walking along that good track.
Good report Kenny cheers

Re: "Did you see that Thing on the t-Seallaidh?"

Great report Kenny, just shame no pics with you ! We' ll rectify that another time hopefully if you can bear the Lycra lady joining in again