The advance party for the Autumn WH meet (Martin G, George D, Parminder, Debs A and myself) had stayed in the Great Glen hostel the night before, and Gill C raced up from the city to join us at Kilfinnan at first gloom on Friday 10th November. A dirty half-dozen indeed, hell bent on ripping up the rule book and nearly following the WH route up the Loch Lochy pair.

Route finding really couldn't be simpler, take a right, then take another right etc, get the idea? Soon enough it seemed, we were on the path ascending through a great little bit of forest.
The gathered clan: 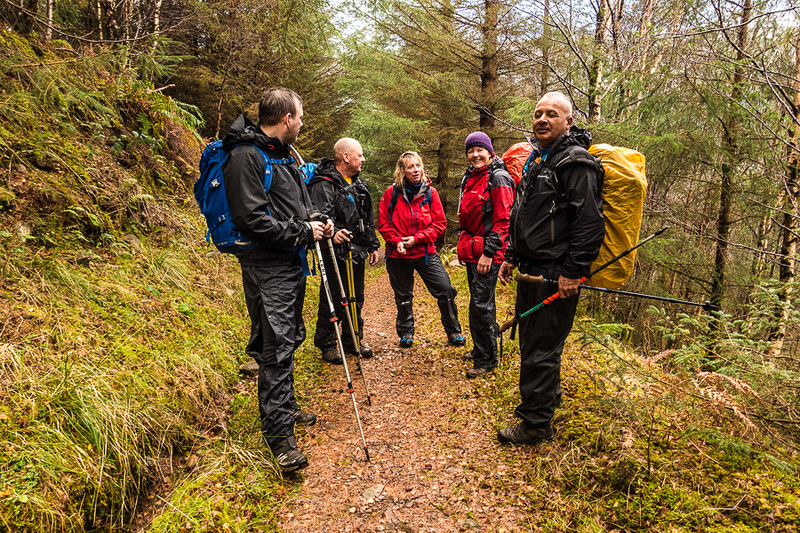 The forest seemed to be over before it had started, and we were on the coffin track up to the bealach, which kind of stared at us for a long time, as we ascended up to around the 600m mark. 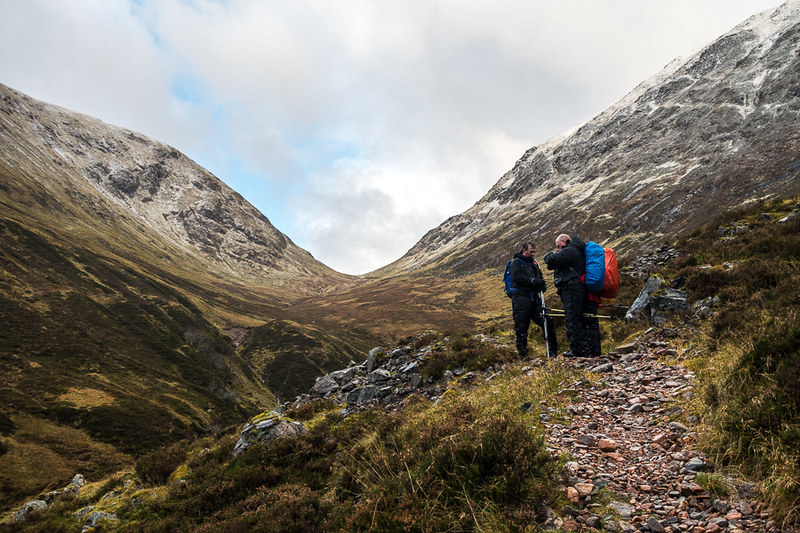 Looking back down to Loch Lochy: 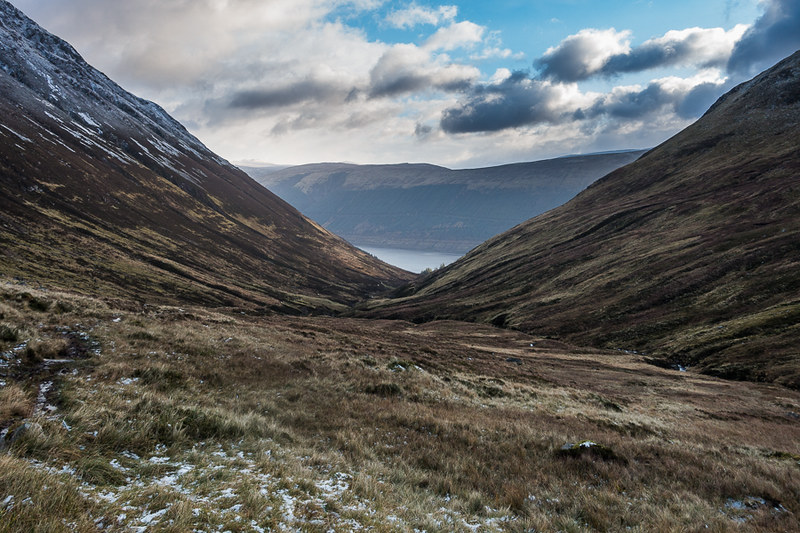 Snow showers came and went, and in between there were patches of blue sky, playing amidst the autumn browns and greys. We were lulled into a false sense of snugness by the shelter provided by the glen, and when hitting the bealach we felt the full force of the wind... 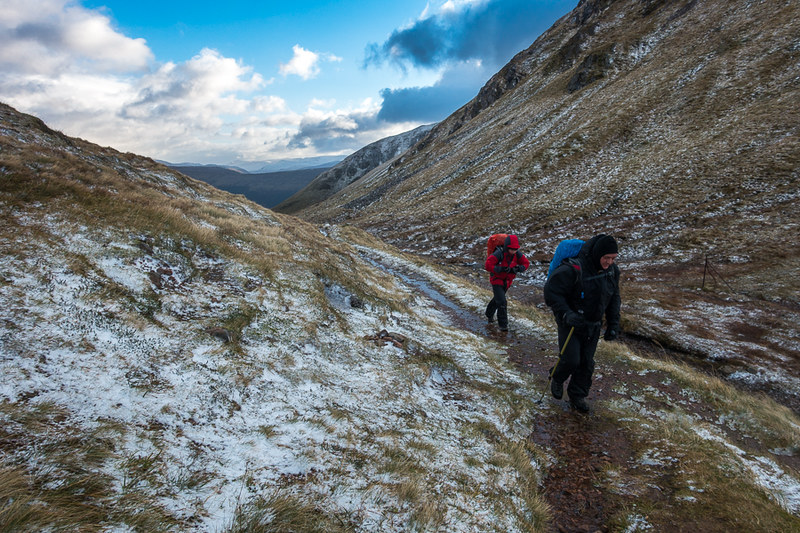 ... but equally breathtaking were the new views to the west: 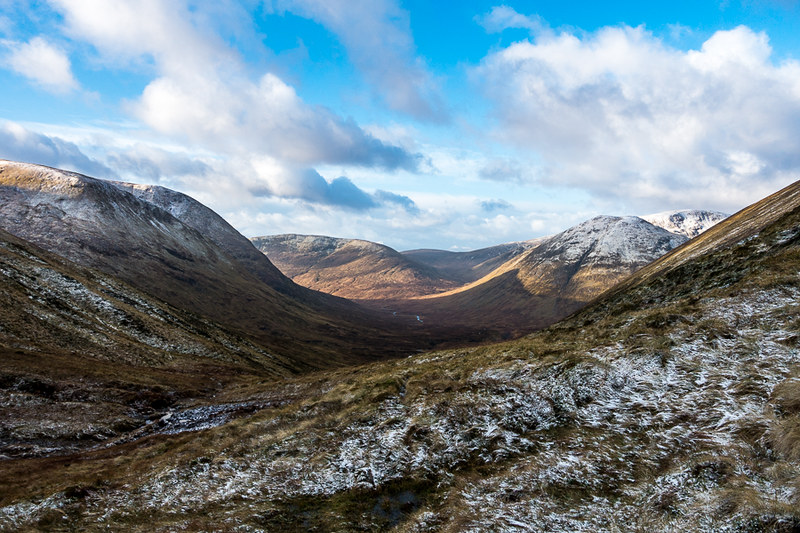 And to Meall na Teanga to the south west: 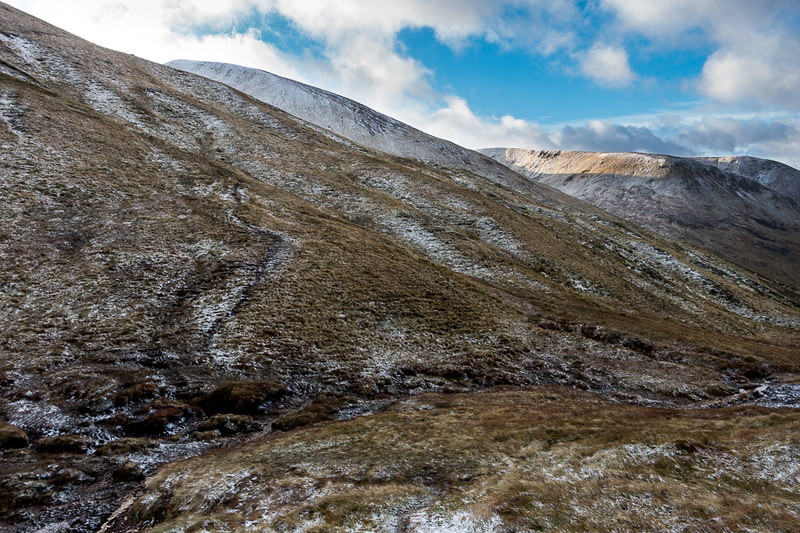 And it was at this point that the people rose up to shake off the iron yoke of Generalissimo Webster, and revolution ensued by deciding to do Meall na Teanga first, in direct contravention to the WH guide ... (Essentially I think it was we could pronounce it better, and it would give us breathing space to work out how to say "Sron a'Choire Ghairbh").

After a tricky peat hag crossing at the bealach we took off up the muddy path traversing across the back of Meall Dubh, and headed for the obvious path up to the summit ridge of Meall na Teanga. At this point a mysterious figure loomed out of the murk, 'twas none other than the Darren H himself, motoring up the hill like a man possessed. He walked with us to the summit and back to the bealach before racing ahead to complete the walk and rescue his missis from the fleshpots of FW.
Traversing Meall Dubh: 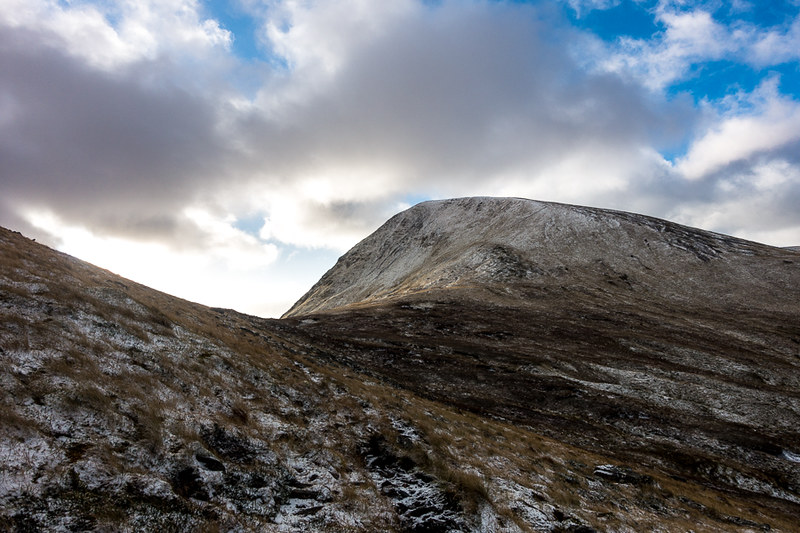 Looking back to Sron a'Choire Ghairbh, and the obvious zig-zag stalkers path that I would come to love so much: 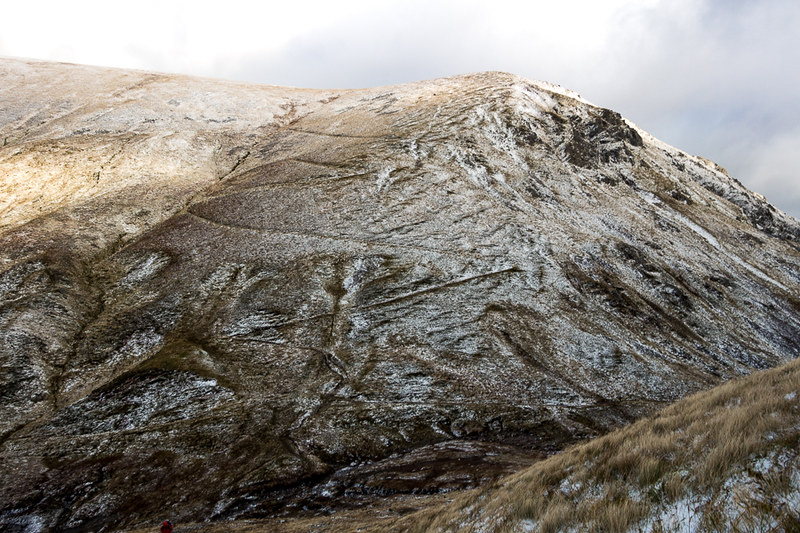 The path up Meall na Teanga clearly visible to the right, got a little icy in places ... 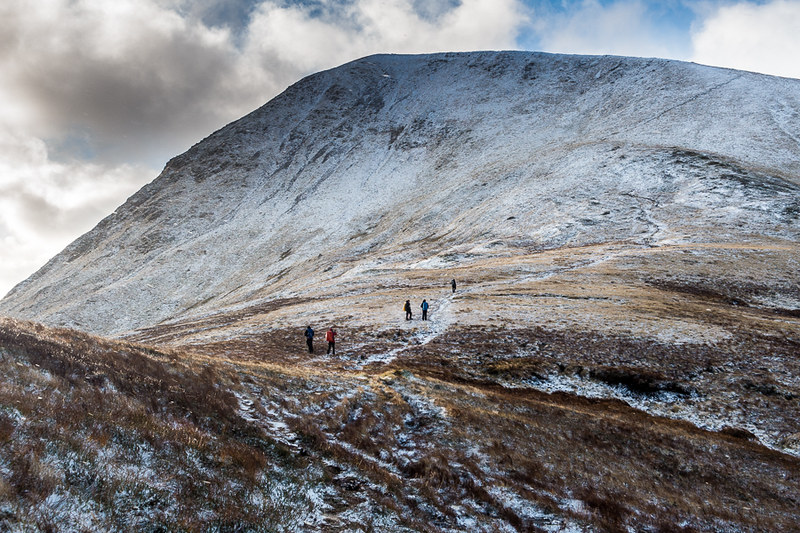 The final walk to the summit was along an almost flat and wide ridge to the cairn at the far end. We were blessed with excellent views, but the wind was biting, and it wasn't a place to hang around for too long. By the time we were leaving my fingers had frozen, but we got some half-decent snaps.
Summit ridge/plateau: 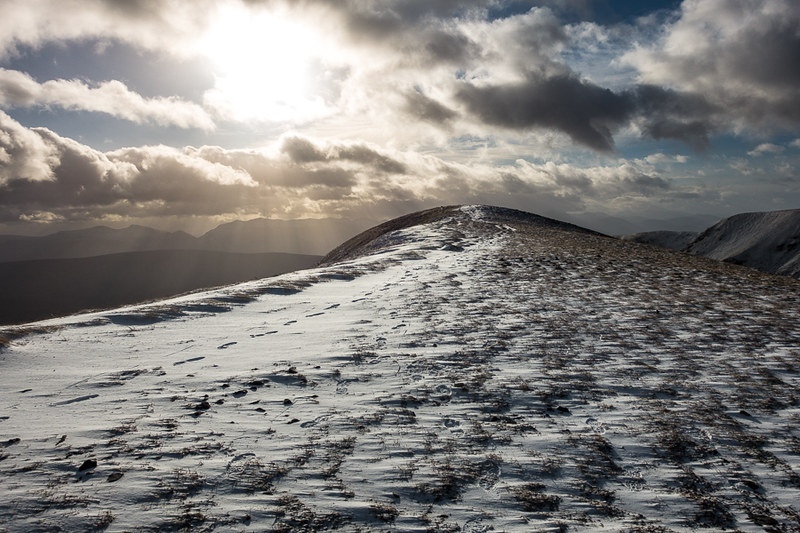 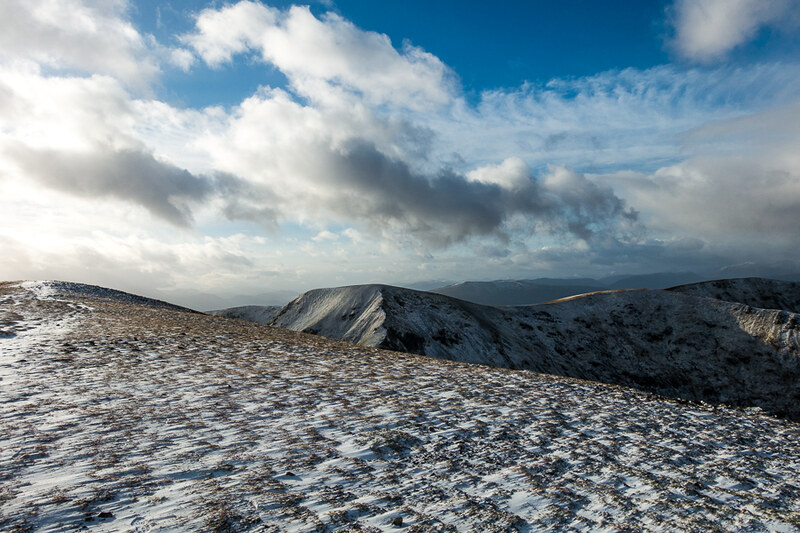 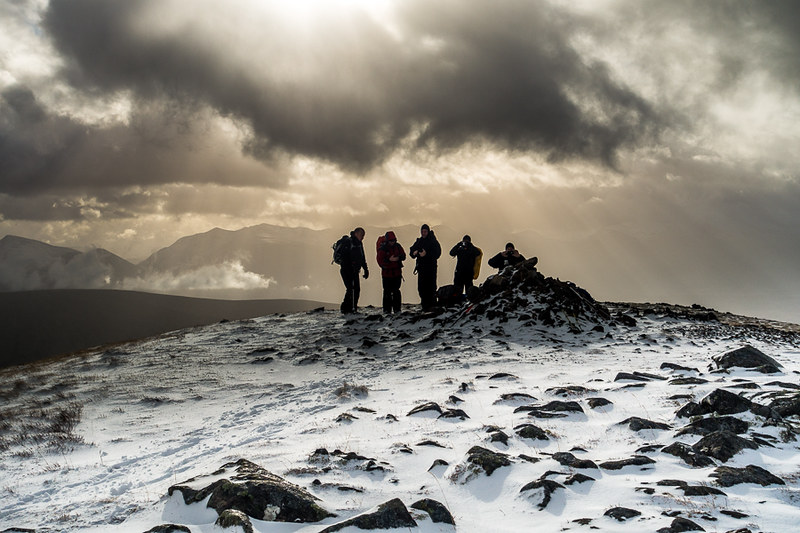 Deborah arriving at summit, barely able to conceal her elation: 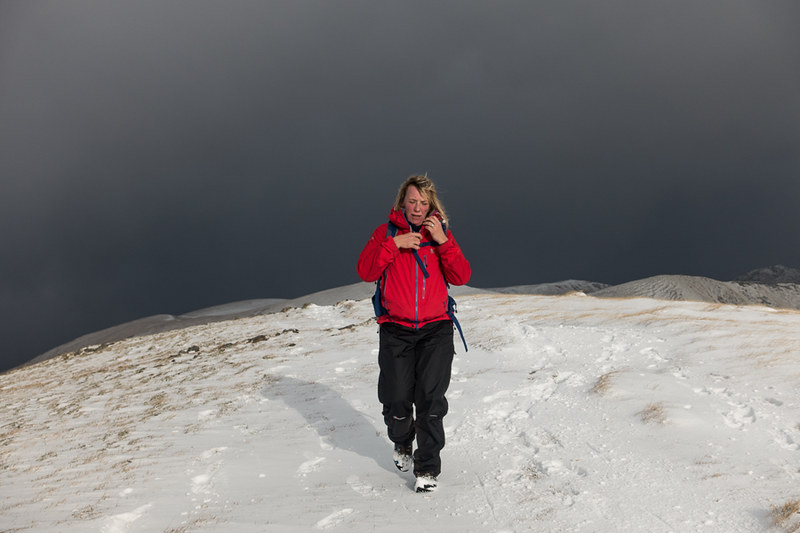 And so it was back to the bealach to tackle Sron a'Choire Ghairbh: 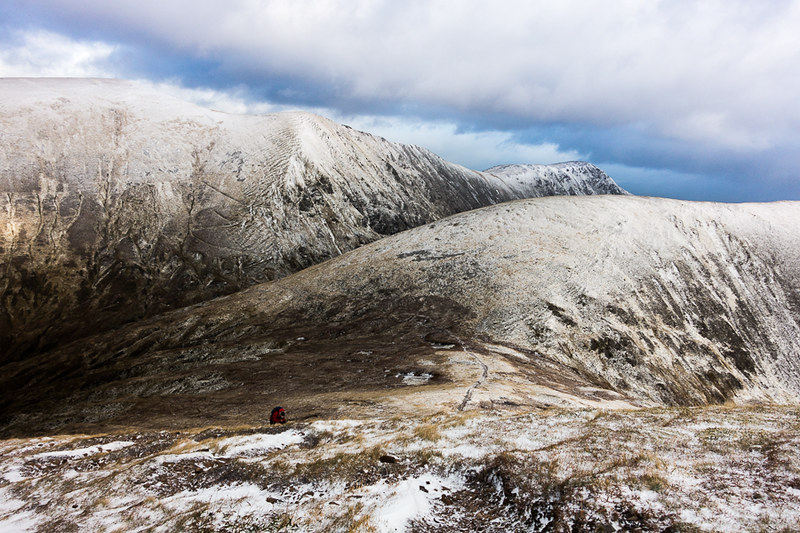 At the bealach George and Gill decided to call it a day. In fairness they'd both done these hills before, and it was starting to blow a hoolie with horizontal snow. The rest of us continued up the stalkers zig-zags. At this point, for me at least, fatigue set in. Maybe the effect of no hills for months, yesterday's Corbett, and several decades of beer around my waist, whatever, I felt pretty knackered and it was a grinding plod until the wide summit ridge was gained when the mojo reappeared, and the the snow stopped.
Meall na Tangea from summit slopes of Sron a'Choire Ghairbh:

The wind kicked up some spindrift, making us feel like proper mountain types. 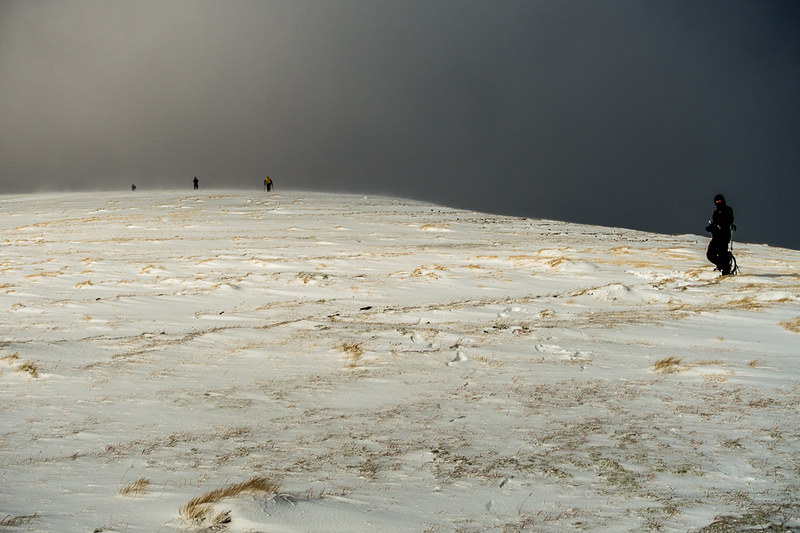 Hutch reappeared, as did Alteknacker, on one of his human dynamo-style jaunts.
Summit slopes: 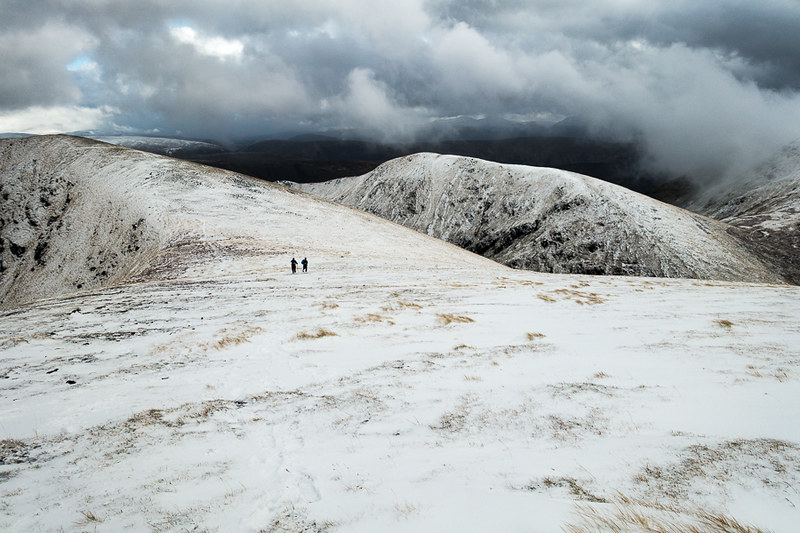 Martin and Parminder at the summit: 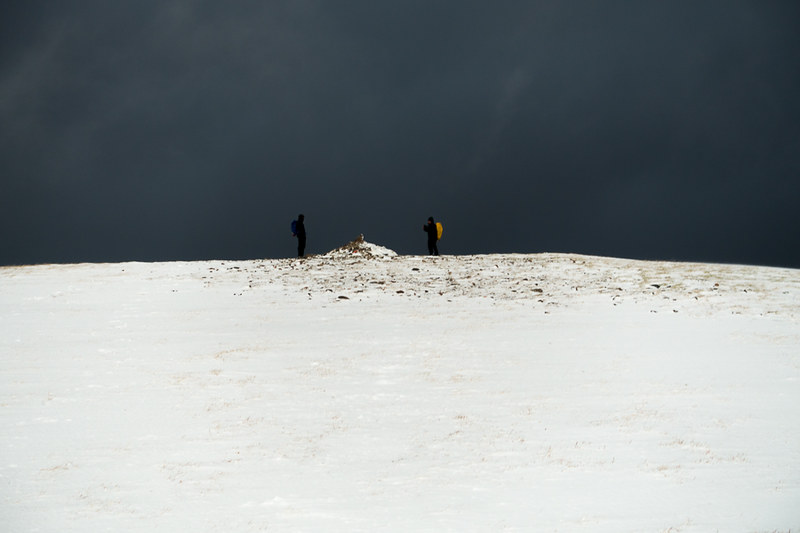 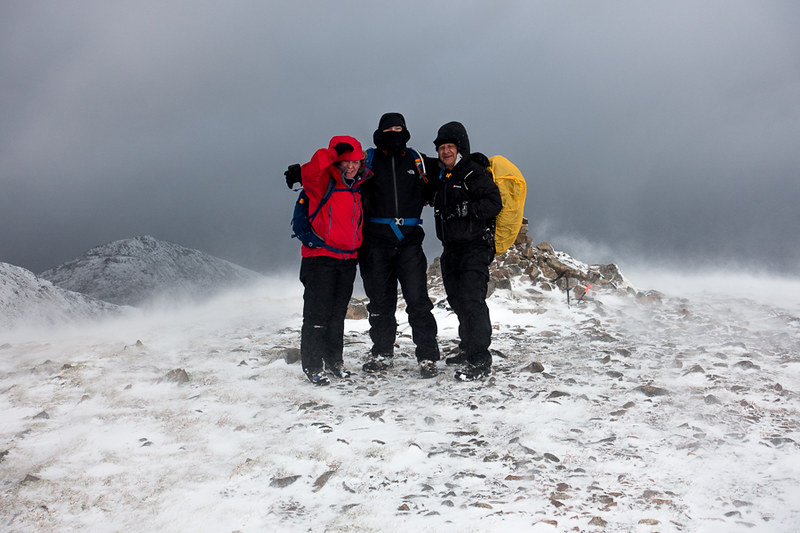 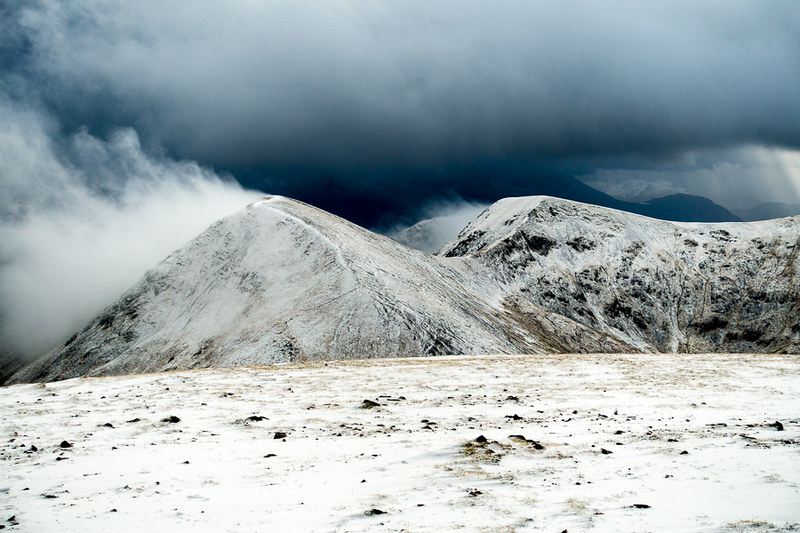 Other directions from summit: 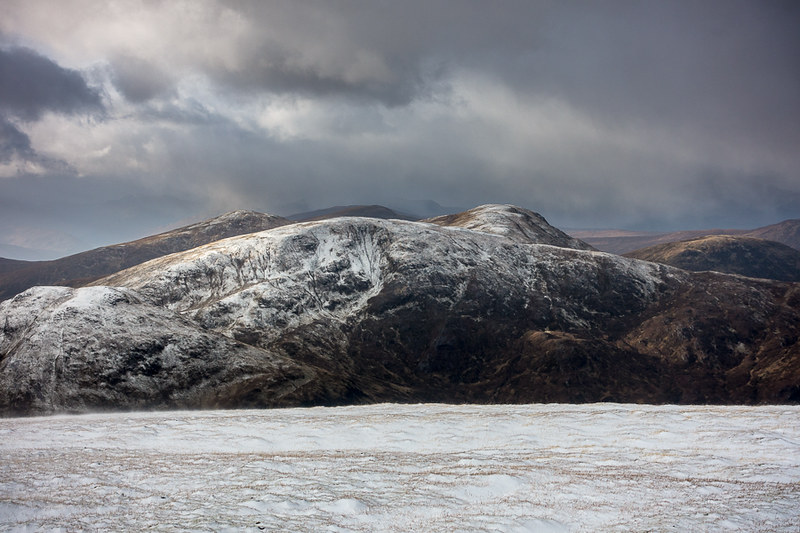 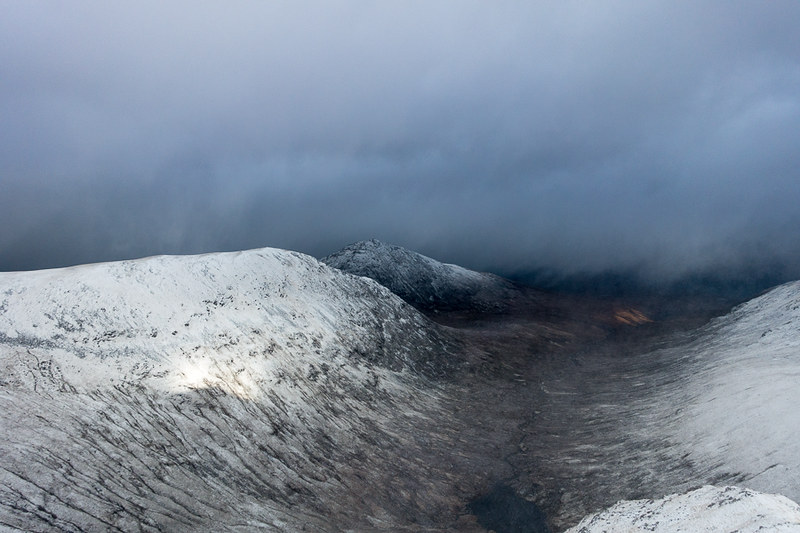 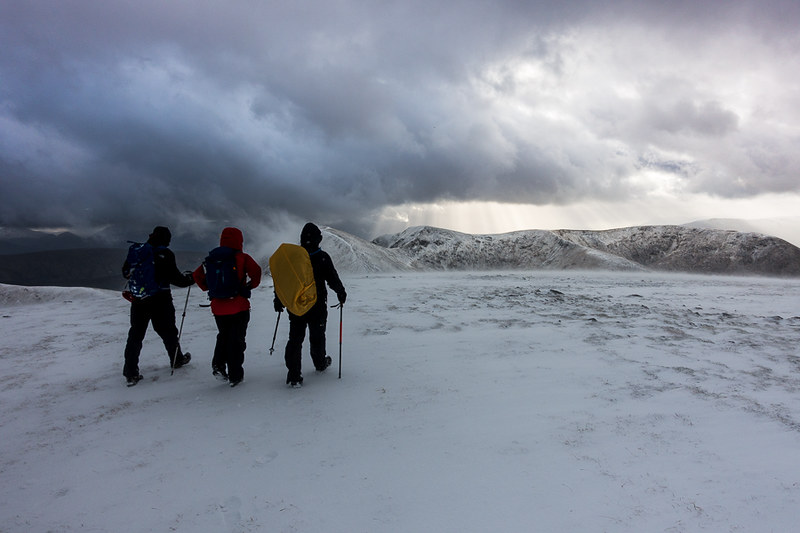 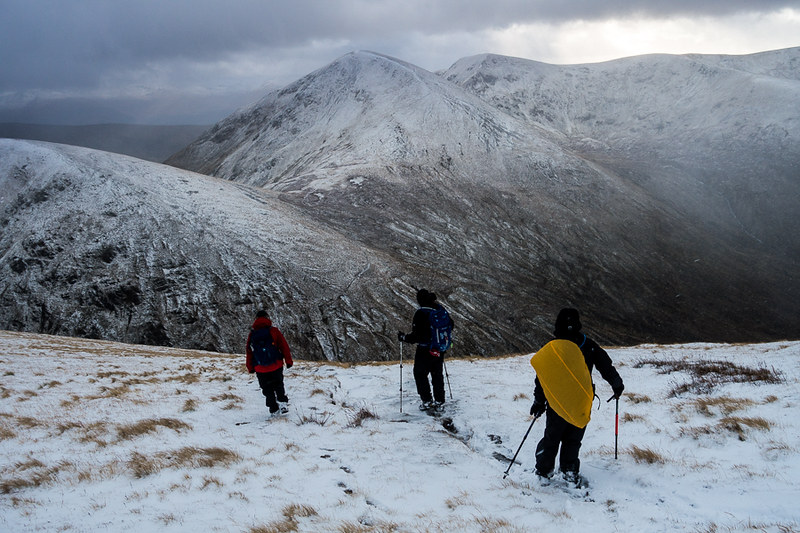 But not without a cheeky snow angel first: 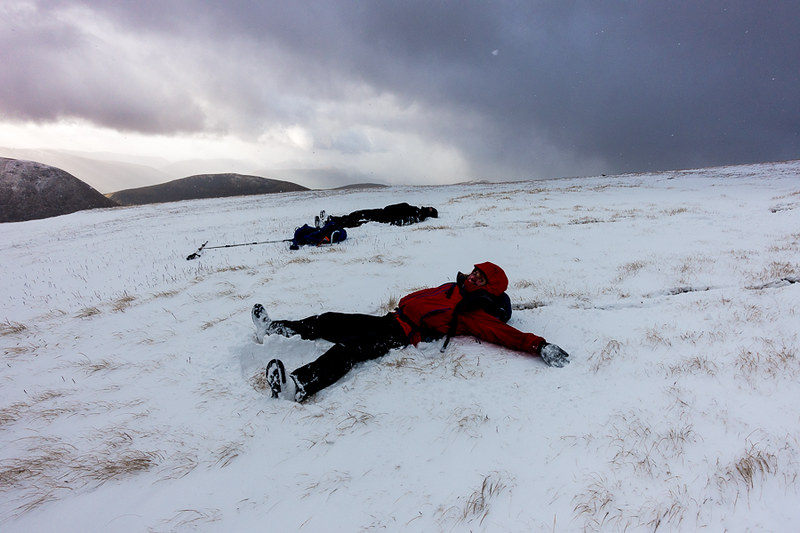 On the way down fatigue took its toll and both Parminder and myself were struck down by leg cramps, certainly slowed us down a bit.

Last views from just above the bealach: 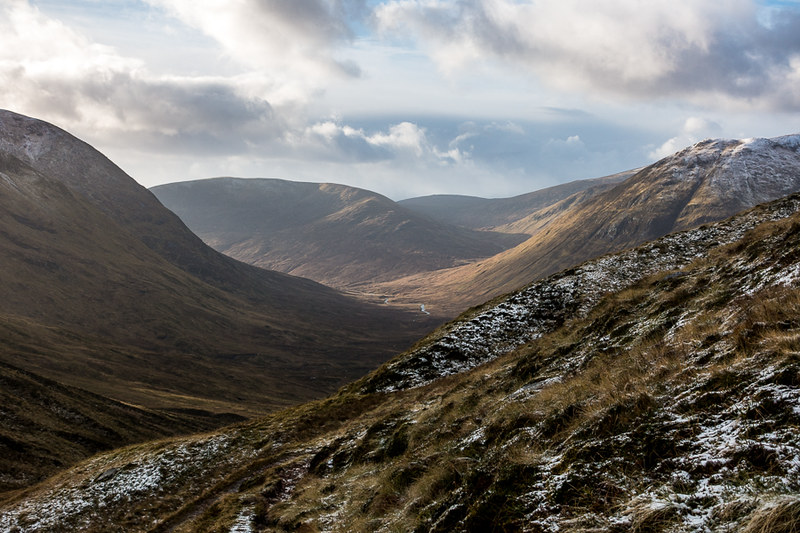 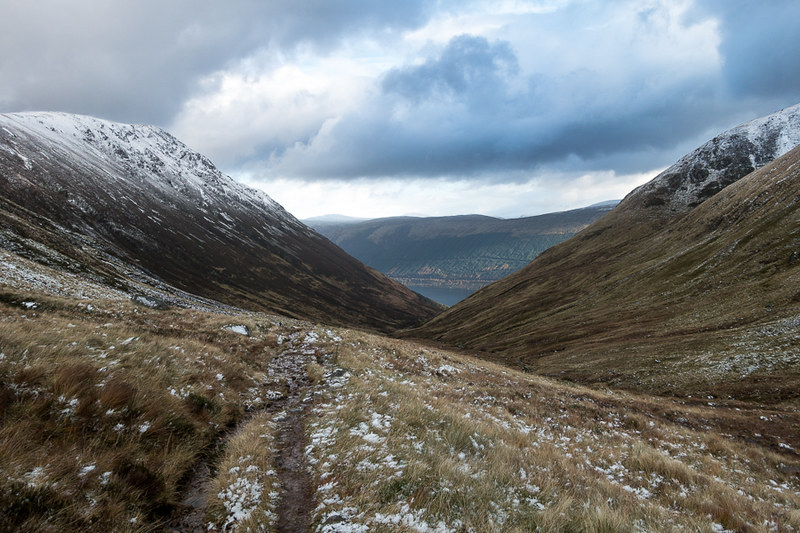 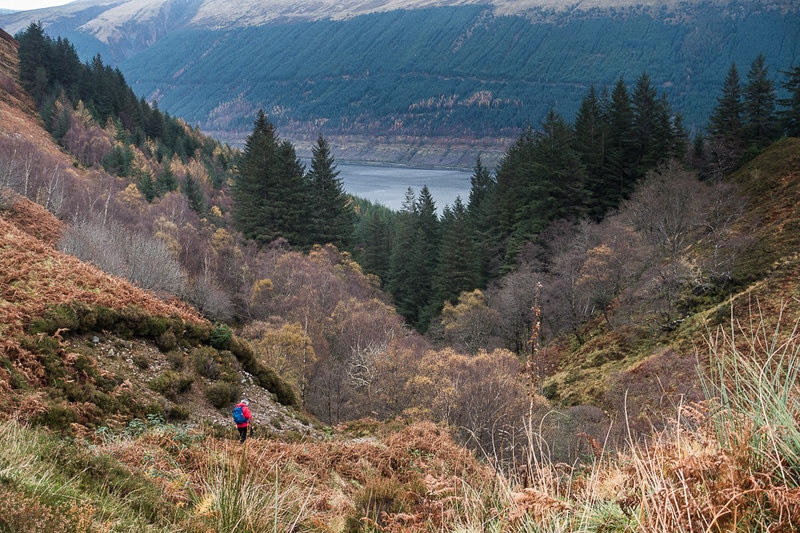 So, a good time was had by all (apart from the tired and crampy bits), and a fine walk it is indeed.
Meall na Ka-Tangea and pal.

Great account of the day Jonathan and I missed the snow angel opportunity, I didnt know that, I may have changed my mind and done the 2nd hill.

Fab report as ever....I would add that George and I stopped several times as we left you at the beallach, convincing ourselves to follow you up. ..buy the draw of a warm cuppa would win the argument lol. Fab day in fab company

I like the sound of Generalissimo Webster. It has a certain ring to it. I think it could well stick!

Decent views off these two, much better than some we got from adjacent corbetts at a similar time. Life's cruel eh?
Good to see you again and as ever a quality report

Looks like a good day out! We were waving at you from the Arkaig Corbetts but you were probably concentrating on not blowing away

Good effort on the snow angels

Nice report and photos. The only thing I can remember about these hills is that Wonderful stalkers path

Some wonderful, atmospheric, photos there. Lovely. Sounds, and looks, like a great day.

Some really excellent pics there, especially the shot of the party on the summit of Meall na Teanga.

That surely was a nippy and windy day! Not sure how you missed the snow shower I wandered about in for about an hour before getting to the summit of Sron a'Choire Ghairbh ...

Hi there, excellent report which I really enjoyed reading.

You guys certainly seem to know what you are doing, I wonder if I could trouble you for some advice/guidance?

I am planning on walking GGW in April and I aim to tackle these 2 munros. I have recently bought OS Explorer 400 map, reprinted with new cover September 2015, so not sure if this is the latest version or not?

I am marking my route out on the map and I can clearly see Cam Bhealach marked all the way to zig zag approach to Sron a Choire Ghairbh. However this then just appears to end and there doesn't seem to be any approach clearly marked (that I can see anyway) to Meall na Teanga, thereafter.

My question is this, once you get to that point are the approaches up both munros clearly visible? I have read a number of reports and it does appear straight forward enough. Perhaps I am just being over cautious.

Any advice/guidance/pointers would be much appreciated. Once again well done on an excellent report. You guys certainly seemed to enjoy yourselves.