Ladies and gentlemen, time for a hot cuppa on a mountain summit! And where would it taste better than on the top of Ben Tee?

We had done this Corbett before, but it was close to the autumn WH Meet venue so we hoped, arriving at the hostel on Saturday morning, that we would find fellow souls to accompany us up the tea hill. We were pleasantly surprised to find out that there was already a group of six walkers planning this route, so we jumped in

Hopefully, the meowing one didn't scare anybody!

The idea was to follow the classic route for the Corbett, from Loch Lochy up the eastern side of the hill, quite steep to start with, later boggy - oh, yes, a nice quagmire

But I was excited to see loads of snow higher up - hopefully we'd get a cloud-free summit which we didn't the previous time.

Track_BEN TEE 11-11-17.gpx Open full screen  NB: Walkhighlands is not responsible for the accuracy of gpx files in users posts
It was raining when our group prepared to set off but forecast was for sunshine and showers, so maybe we'd get some sunshine later on!
The Tee Team ready to go (minus Kevin who was taking the photo): There is a faint path from the beginning and despite the wet conditions we were marching up at a steady pace: 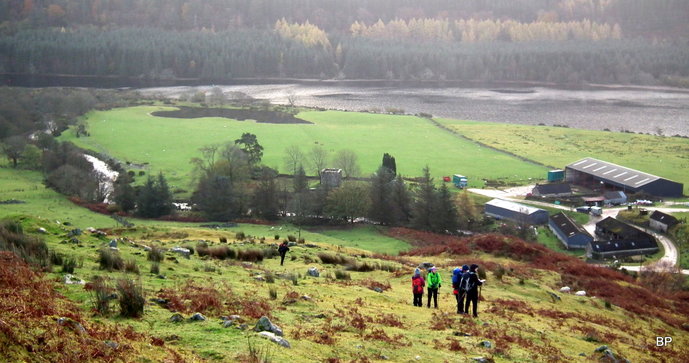 The rain stopped and we could even see patches of blue sky appearing on the horizon so hopes were high...
Up we go: 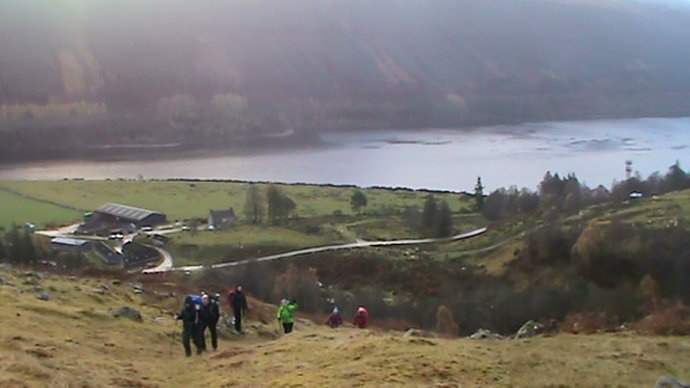 Tee! Tee! It was cloud-free at the moment and very white! 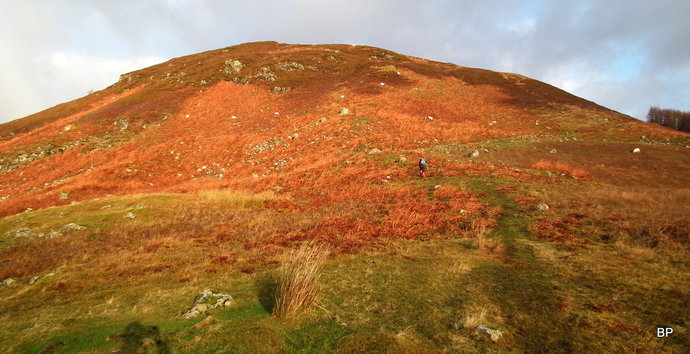 I remembered from our previous visit there was a reasonable stalkers path zig-zagging up the slopes, I marched on, the group followed. At the moment I felt like a guide The sun came out and suddenly the world around us was transformed to nice autumn wonderland... At least for the time being! 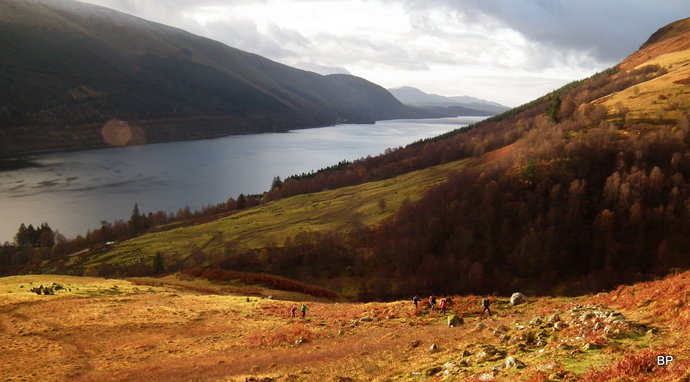 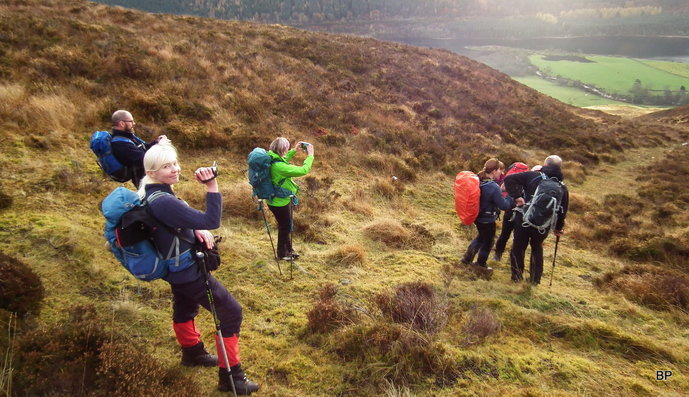 ...because we spotted the familiar shape of Ben Nevis:

The atmosphere was great, we had a good laugh about bladder-sucking (not mentioning who sucked whose bladder as it would be considered inappropriate to share such intimate details

) until suddenly, another shower arrived and we had to stop to wrap up in waterproofs. Thankfully the rain didn't last long and as it passed, we were delighted to see "our" hill and the neighbouring Munros basking in sunshine:

We continued on the path (wet and slippery) to the deer fence, where Kevin half-dismantled the old wooden gate so we didn't need to climb over the wonky stile...
At some point I stepped into a hole in the ground, of course it was full of water and it poured into my boot! Arghhhhhhhhh!

I swore in Polish and kept moving up. A wet sock won't stop me from reaching the summit!
It didn't go so well for David who took a nasty fall on the slippery path and was struggling a bit to keep up, so he and Dibs decided to turn back at this point, while the rest of us pushed on. We lost the path at some point but entered the snow zone - now we're talking hillwalking! Rummaging in rucksacks for a quick snack:

The higher we climbed, the whiter the world around us At some point I located the path once again - now it was a straightforward march to the top! A nasty-looking cloud passed just to the north of us, but we were lucky. It never reached us: BP's final push to the summit: Ciste Dhubh, one of my fav Munros: The nasty cloud just missing us to the left: Not far now! The last 100m was in quite deep snow: ...but with such fantastic views around, who would complain about some white stuff? Summit in sight, Gill and Darren in a hurry to be there before another shower spoils the party On the top with wee Lucy (her 56th Corbett): At least this time we had good views, must be second time lucky... Ben Tee is an amazing viewpoint and despite the Lochy Munros so close, it offers great panoramas to the north and west. Here are a few snaps from Kevin's camera.
Loch Lochy Munros:

The wild world of Knoydart: 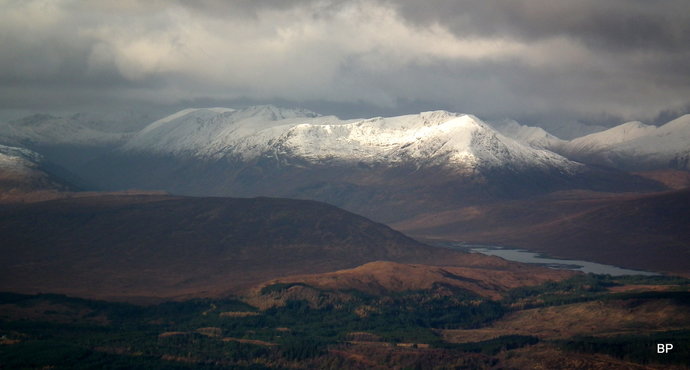 Sgurr na Ciche so prominent on the western horizon:

Glenfinnian hills in the distance: 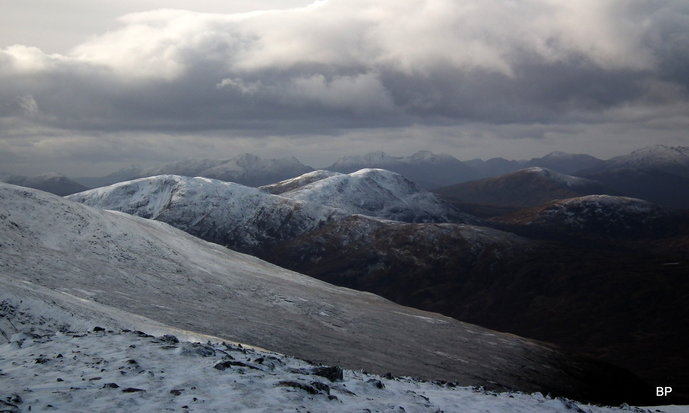 After a lengthy break on the top, we returned the way we came (well, mostly), jumping over wet puddles and performing some strictly come mud-dancing maneuvers, weather broke at some point and we walked through a snow shower, so glad we caught the right moment for the clear summit!
On the way down:

For the last part of the descent, weather improved again and yeas, i had a reason to smile (and meow!)...
Wild Panther on the loose!!! Despite the showers and bog, it was a great day, we had been due a visit to this Corbett for a while

Many thanks to Gill, Darren, Anne, Jules, George and David for company (hope I didn't misspell your names!).
The evening was of course dominated by the evening quiz and the Omniscient Quizmaster

We had a superb time, even slept well in the tent despite the cold and rain outside - bring on more meets like that! It was great to see some old friends and meet new ones, apologies if I didn't chat to everybody, too much Tyskie beer I think Some folks went on to climb hills on Sunday since weather looked very nice and bright in the morning. We were under no pressure, especially that I had to prepare a b'day parcel for my sister to send the next day, so we decided to take it easy and went straight home. We couldn't resist stopping in Fort Augustus though, for a short stroll along the Caledonian Canal. There was no wind whatsoever and we admired superb reflections in the canal water... A few samples: 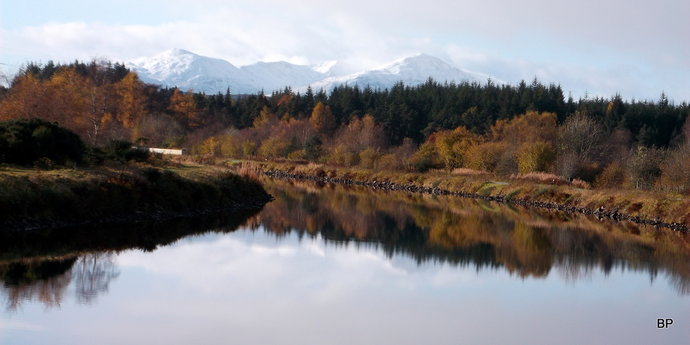 Sadly, the white cover has melted since last weekend but weather is looking promising for the coming one so hopefully we'll visit the hills again - more meowing to come for sure!

Good to meet you and Kevin again

. Looks like an enjoyable day out - would've been tempted along for a slightly later start if I hadn't chatted to Alteknacker first

. Ciste Dubh looks great from there.

That looks like great fun, great conditions and plenty of banter no doubt!

I love your big pano pics - isn't it just a fanastic part of the world? The Met Office were excessively pessimistic, I think.

Really good to meet you and Kevin; and I think we had a kind of psychological victory in the quiz...

Another successful meet, even if only one hill for us. The forecast was way off, but I noticed that Met Office tend to be pessimistic. We had a good day on the hills yesterday and some nice views, despite forecast for overcast cloud all day

The quiz was fun! I realized I had hidden knowledge I never knew existed, and at the same time lacked basic info in some areas