Bhac to the Future!

Bhac to the Future!

. Plan A had been to tackle a couple of hills at the east end of Glen Shiel (a'Chralaig and Mullach Fraoch-Choire) with Tom, but the truly dismal West Coast forecast really didn't entice, and that ended up getting called off - sensibly enough, I suspect. However, my Munros tally for 2017 was definitely looking a bit meagre, and I was really keen to get one more in before the clocks went back and the winter snows descended. After some perusing of the www.mwis.org.uk mountain forecasts and the Munros books, I decided to tackle Carn Bhac as a singleton from Inverey, using an ingenious circular route as described in Ralph Storer's "Ultimate Guide" (this is Route 134b from his Volume 4). Yes, it was time to fire up the DeLorean, dig out the flux capacitor and set off Bhac to the Future! Appropriately enough I was even wearing my Calvin Klein pants, as it happens, if that's not TMI

our_route.gpx Open full screen  NB: Walkhighlands is not responsible for the accuracy of gpx files in users posts
I got a quick run up the road to Braemar and on to the car park at Inverey. As forecast, it was a bit breezy as I set off - perhaps not surprising, given that the unholy remnants of Hurricane Ophelia were at this point howling northwards towards the British Isles from their watery mid-Atlantic grave

- but it was at least dry, and there was a handy big signpost pointing out the track up Glen Ey, lest there be any doubt. 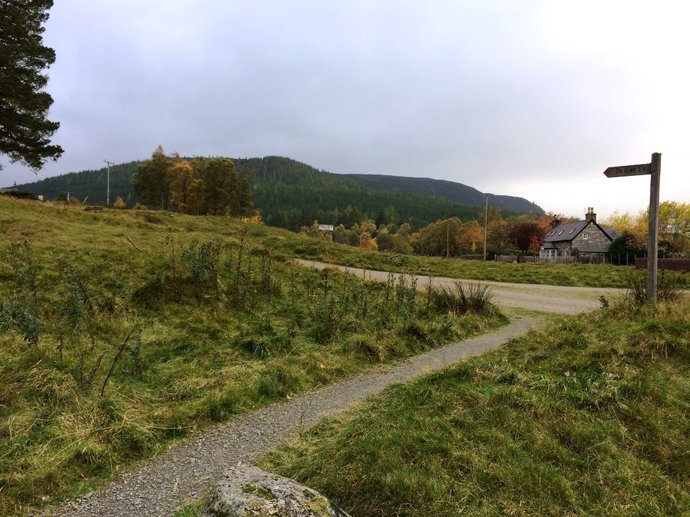 There was a pleasingly rustic-looking hut just at the outset. As Disney's Gaston would say, "I use antlers in all of my decorating..." 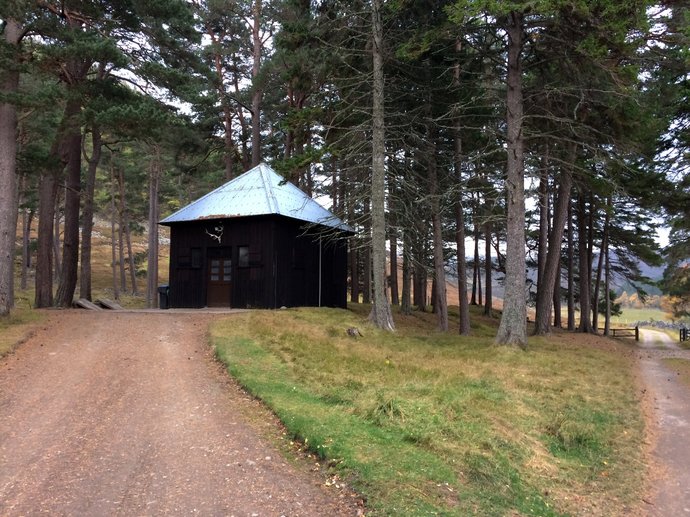 A bit further up the track, I came to the Bridge over the River Ey. There was some lovely broadleaf woodland right along the river, with beautiful autumn colours (before any zombie hurricanes had a chance to strip the trees of their leaves, I suppose). 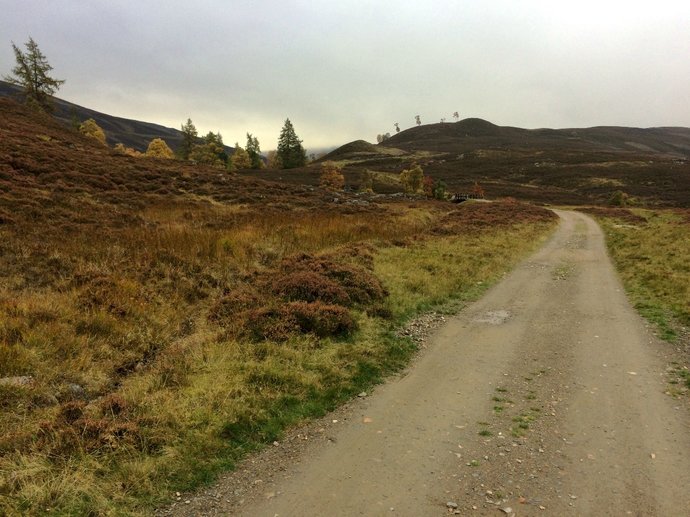 It was a very pleasant ongoing walk up Glen Ey, with more pleasing autumn foliage to admire. 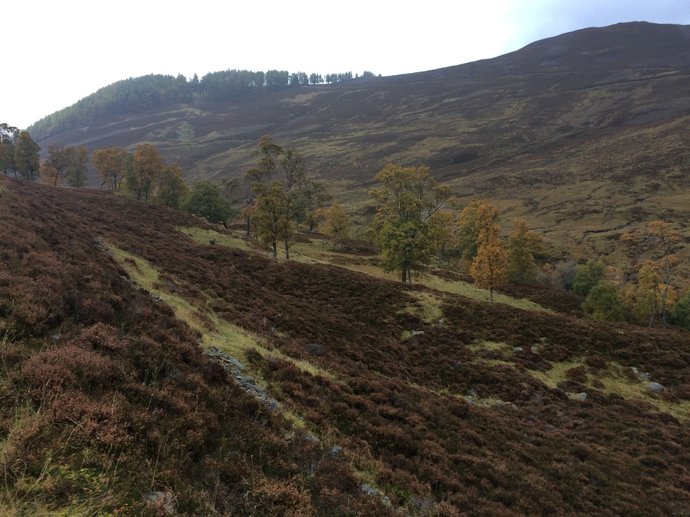 Most people seem to tackle Carn Bhac from Inverey along with Beinn Iutharn Mhor, which would have been a much more appreciable outing for this late in the year. However, I'd already done Beinn Iutharn Mhor as a (surprisingly straightforward) add-on to the standard Dalmunzie House Hotel approach to Glas Tulaichean and Carn an Righ, which just left me Carn Bhac to do as a singleton. This meant that I only had to walk down the main Glen Ey track as far as the ruined steadings at Auchelie, and then turn right up a grassy track leading onto the north-east ridge of Carn Creagach, a minor top just to the east of Carn Bhac, and thence on to the summit.
That should hopefully make this a fairly short outing, and leave me time for an interesting diversion. Yes, it was time to fire up that Flux Capacitor, set the coordinates for 1689, shortly after the Battle of Killiecrankie, and visit the Colonel's Bed. There was even a signpost pointing the way... 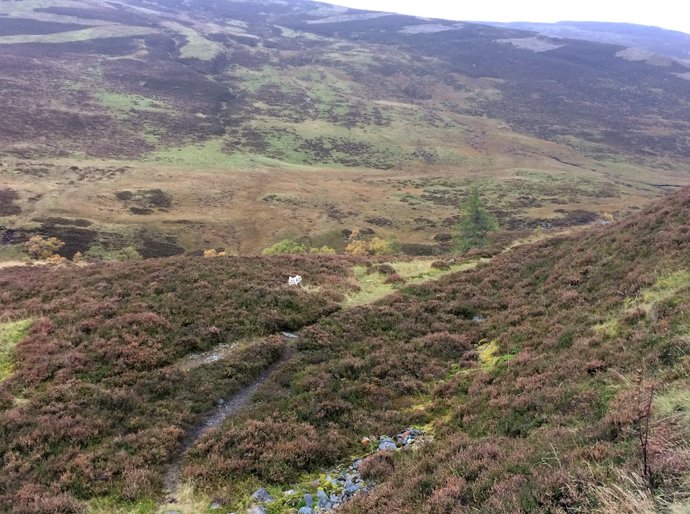 The Colonel in question was Colonel John Farquharson of Inverey, also known as the 'Black Colonel' for somewhat obscure reasons. After defeat by the English redcoats at the Battle of Killiecrankie, he apparently hid out for several years in a scenic gorge on the River Ey, being brought food and other supplies by sympathetic locals.
The Colonel himself sadly didn't seem to be in evidence today - maybe he was off harrying some redcoats, or something - but his Bed was certainly a scenic spot, right enough. 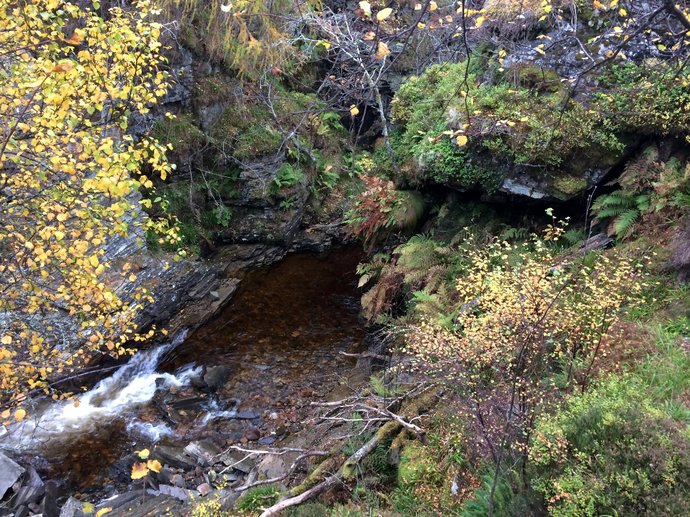 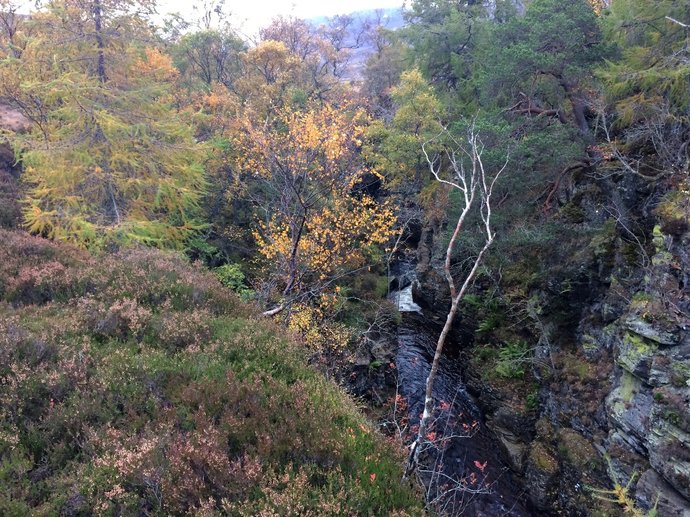 Anyway, I still had a Munro to climb, so it was probably best to get the flux capacitor going again, set coordinates for 2017 and get on with the main walk. It wasn't too much further to the ruins at Auchelie, where the grassy track off right came into view. (Actually, it would be fairly easy to miss this - the start is quite faint, although it gets much more established just 50 metres or so higher up.) 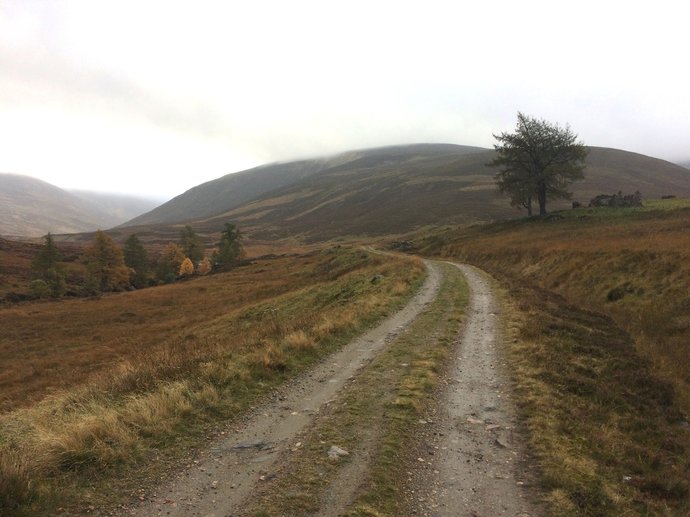 Somewhat worryingly, Carn Bhac means "Cairn of the Peat Hags", and there would indeed be plenty of those higher up by all accounts, but the track made very easy work of the initial 75 per cent or so of the ascent route, as it undulated lazily up Carn Creagach. The breeze was starting to pick up now, with some spots of rain, and by the looks of it I was about to ascend into the Clag

. However, the forecast was for the cloud base to lift around lunchtime, so I was still hopeful of maybe getting some views. 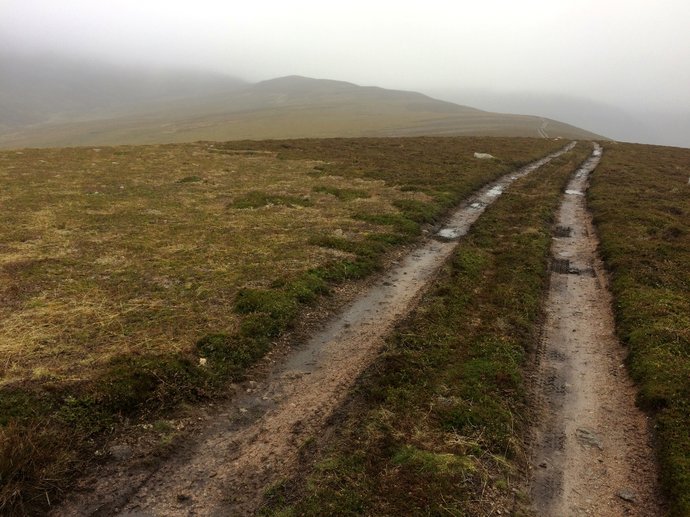 All good things must come to an end, sadly, and before long I was approaching the end of the track. At least it didn't look too much further to the high bealach between Carn Creagach and Carn Bhac... 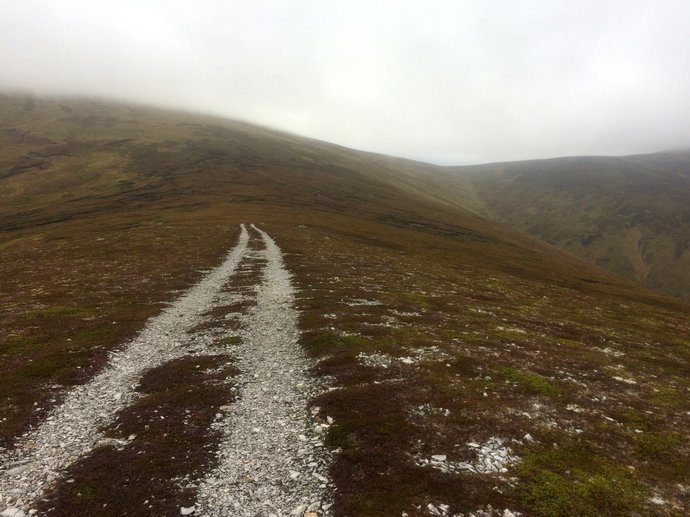 Oh, go on then, Carn Bhac, show us yer peat-hags! 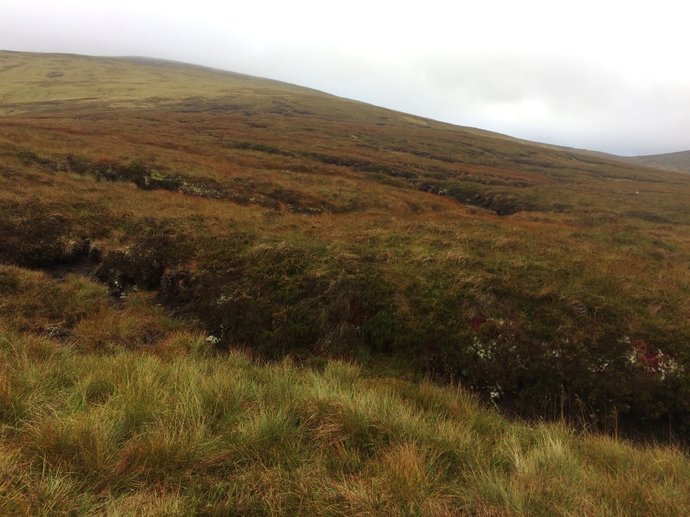 There were lots more to enjoy! In fact, the entertaining peat-haggery continued all the way up to the boggy bealach

. However, as I approached the bealach, the cloud base did appear to be slowly lifting as promised, and there were glimpses of the Beinn Iutharn Mhor massif further to the south. 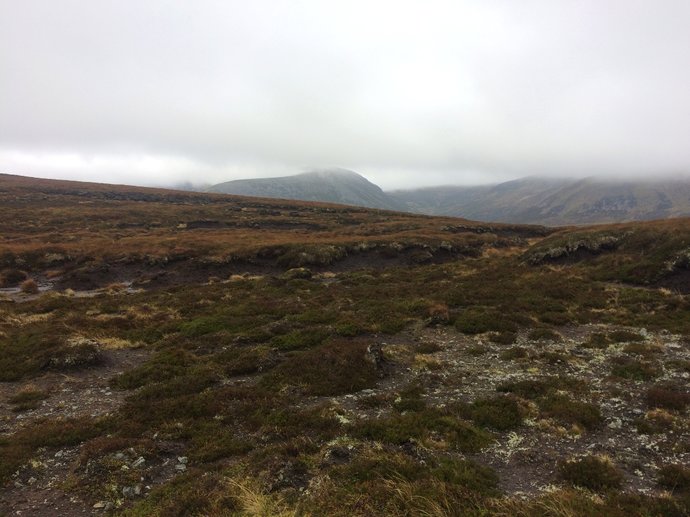 On the bealach itself, the peat hags were particularly impressive, and I had to stop for a bit to admire them before setting off westwards for the bouldery summit dome of Carn Bhac itself. 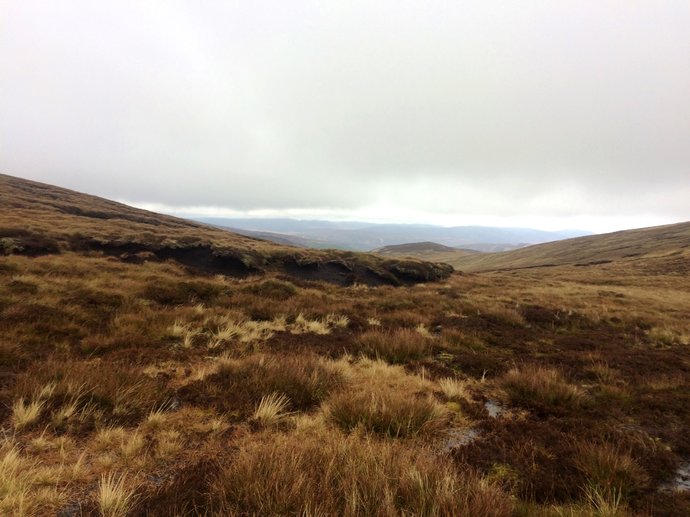 The terrain improved massively on the way up, and before long I was up at Carn Bhac's nifty windshelter cairn and eating my sandwiches in the Clag. However, just as I was about to start Sandwich #2, a wee breeze suddenly cleared the Clag completely, giving me some summit views after all!
The inevitable Summit Selfie: definitely more Dr Emmett Brown than Marty McFly... 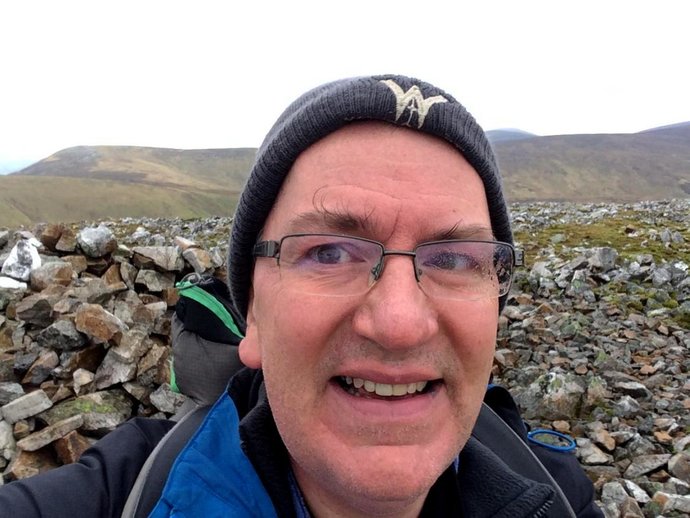 And some summit views in various directions: 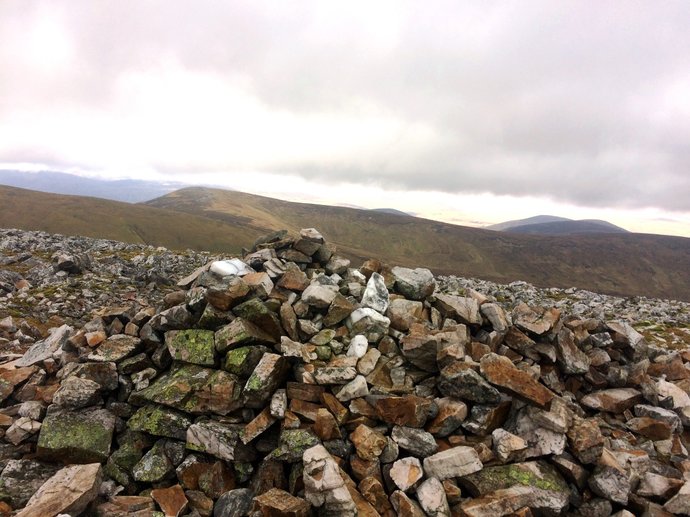 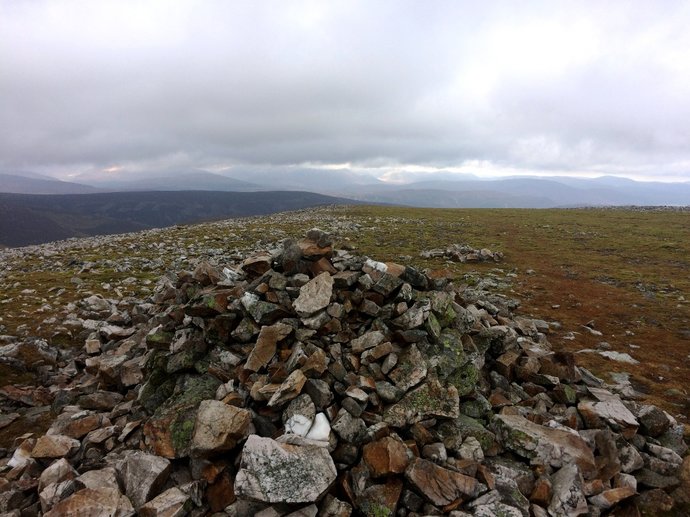 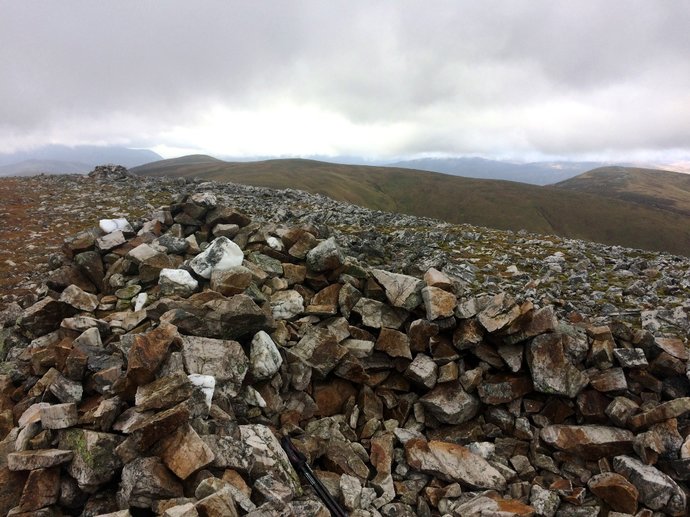 Now, for an easy life (and further Peat Hag Appreciation), it would be possible just to go back down the same way ... however, as suggested by Ralph Storer's route description, there is an interesting alternative of heading back down via a steep north-eastern spur of Carn Bhac to cross the Allt Coire Bhearnaist just before its confluence with the Allt Connie, then heading right back down to Inverey via the glen of the Allt Connie (which eventually flows into the River Ey just south of Inverey)
I therefore just headed off north-eastwards from the summit cairn, crossing a couple of bits of boulderfield and then heading down the north-eastern spur itself. It gave a grand view down to the meandering Allt Connie far below: Lower down, there were yet more beautiful peat hags to admire at a brief levelling

. I kept towards the right-hand edge, however, and it wasn't actually as bad as it looked from above! I got across the Allt Coire Bhearnaist easily enough using boulders as stepping stones, and picked up a faint path on the other side heading eastwards down the glen of the Allt Connie. A bit further down this developed into a proper track (albeit a muddy and intermittently wet one), and this gave much quicker going. The prominent and attractively dappled hill on the right of the glen as it bends leftwards lower down is known as Carn Bhithir, or "Bh[e]ithir's Cairn". This is the same Bheithir, Celtic goddess of snakes, thunderbolts and other sudden catastrophic and unpredictable events, who gives her name to Beinn a' Bheithir at Ballachulish. She is a fascinating character, sharing some interesting characteristics with various other terrifying female deities such as Kali from the Hindu pantheon, Fortuna ("Lady Luck") from the Roman one, et cetera. Thinking of destructive female electricity also put me in mind of a fine novel I'd recently read called "The Power" by Naomi Alderman - some of the most interesting writing about gender I've ever encountered. But I digress

.
Anyway, I thankfully made it down the glen of the Allt Connie without encountering either snakes or thunderbolts. The sun even started to come out as I got lower down! And at the very end of the route, just before the confluence of the Allt Connie with the River Ey, there was a final treat in the form of a rather dramatic waterfall on the Allt Connie: Carn Bhac itself may be something of a rounded lump, but it sits a good way back from the road in the midst of some extremely scenic countryside, and all in all this was another Grand Day Oot

An excellent, entertaining and informative report, thank you. And definitely best title pun of the month; do we need a sponsor for a prize for this too?

Mal Grey wrote:An excellent, entertaining and informative report, thank you. And definitely best title pun of the month; do we need a sponsor for a prize for this too?

Thanks for these kind words, and sorry for the rather belated reply.
Yes, painful puns in WR titles do seem to have become a real Walkhighlands tradition

! I've done my humble best to make a few contributions to the genre...

Thanks for the book tip, so difficult to choose the next good read