It was actually two quiet sides to Scafell Pike today, in fact three if you count the summit itself - because I got there just after 1030 it was almost deserted and the whole massif was eerily quiet. The other two quiet bits were the way up, via Brown Band onto Great End and the way down, into the hanging valley of Greta Gill to the northwest of Broad Crag. Both were completely deserted. Not bad for a crystal-clear mid-November morning. Parking spot at Seathwaite. I was there early enough (about 7:30) to get poll position, closest to the farm. Looks darker than I remember it. I decided to take the route up to Styhead via Taylorgill Force - it's a more interesting route than the Stockley Bridge route, involving a bit of easy scrambling. The start of the route is through these farm buildings - and the signs can be easily missed on your first visit. Taylorgill Force, always worth the detour in my opinion and the scramble up keeps your mind off the hard work. Styhead tarn with Great End (L), Broad Crag (Mid) and Scafell Pike (R) in the background. My ascent route is straight up the broad ridge of the Brown Band in the centre, but it was still a bit too early to make it out very well, with the sun coming up behind it. Sprinkling Tarn comes into view from the lower part of the Brown Band. Serene in the (fairly) early morning.

Panorama from Styhead to Sprinkling tarns. After crossing a shallow cut (the upper reaches of Skew Gill) at about 750 m, there is a short section that involves some easy to moderate scrambling, which is the only section on the Brown Band that can't be avoided. Easy on a pleasant dry day like today. This and the next two photos show the superb panorama looking west to east near the summit. This shows Wasdale with Lingmell on the left and Yewbarrow in the centre and Red Pike and Pillar to the right. More of Wasdale with Kirk Fell and Great Gable on the right. Looking northeast with Seathwaite Fell on the centre, Styhead and Sprinkling tarn to left and right and Derwent Water showing in the distance. The shelter on the northwestern summit of Great End (which is only 3 m shorter than the true summit, 150 m to the ESE). Looking towards Ill Crag on the left and my destination Scafell Pike on the right, behind Broad Crag. It was completely still and because no-one else had made it up yet at about 9:50, completely silent - not my usual experience of Great End summit, From the proper summit - a spectacular view over towards the Langdale Pikes and Bowfell. From the main path looking towards Broad Crag, I had a chance to check out my planned descent route, down the boulder slope to the right, which looked like it could be negotiated with a bit of care. Beautiful view of Great Gable from the final summit slope - normally so imposing from Wasdale, but looking a bit less daunting from this angle. Summit plaque of Scafell Pike with a timely reminder to be sincerely grateful for the silence. 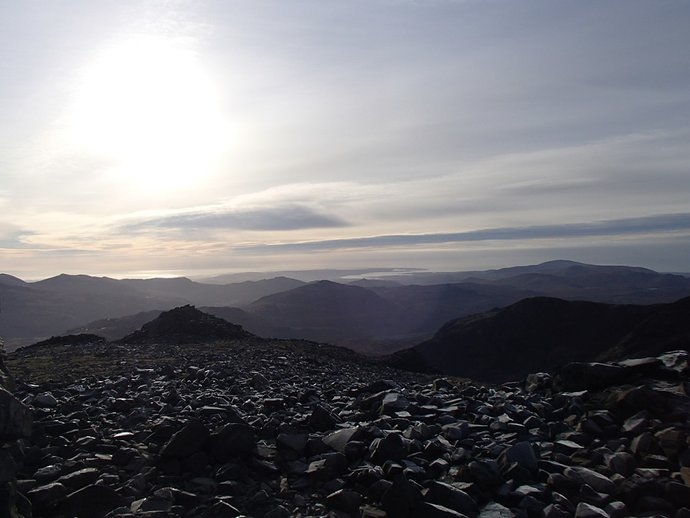 Outstanding views south towards Barrow in Furness and the sparkling Irish Sea. After back-tracking over the slopes of Broad Crag, another moment to contemplate the planned descent into the valley, which still looked good from this angle. In fact after a fairly short scramble over the icy boulders near the top, it was possible to make a straightforward descent over the frozen turf and moss avoiding any short rock sections one side or the other. Lambfoot Dub - not the biggest lake in the District, but it makes up for it with the spectacular position and views. Again it was completely deserted and quiet - an excellent lunch stop. 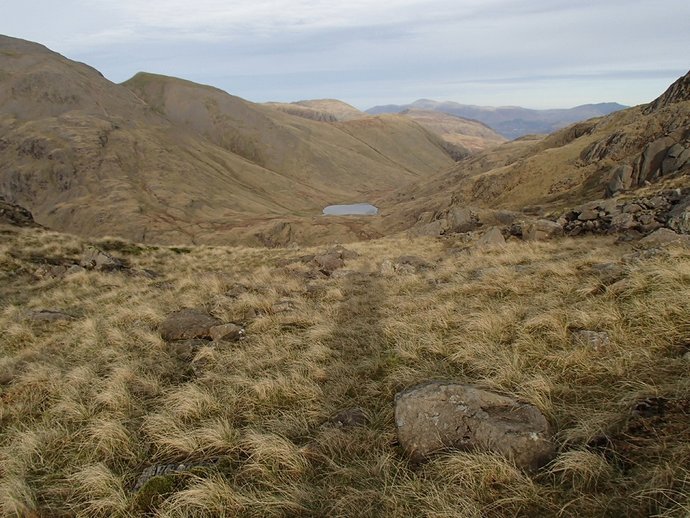 Looking down the steep but easily negotiated slopes below Lambfoot Dub, to join the Corridor Route not far from my starting point up Brown Band. After crossing back over to the main path at Styhead, looking back up the ascent route of the Brown Band. Probably a good idea to avoid going too far over towards those cliffs on the right.. Styhead tarn and the descent route back down Styhead Gill Back to the valley and beautiful Autumn colours. I chose the 'normal' route down rather than by Taylorgill Force to get another look at the iconic Stockley Bridge and its outstanding cascade of falls. A classic day out in the unusually quiet Lakeland Fells.