Harris in October and the sun was shining, it was warm and no wind...I still can't believe it.

With only 3 full days on the Island an agreement was reached with Mrs Dmack that saw me get a hill pass for one day, I suppose I could have gone to arbitration - but I thoroughly enjoyed a day at the beach and the last day spent with some of my extended family. In between was the best days walking I have had.

My chosen walk was a blast from the past, at least for the first part. I have climbed Uiseval many times in my childhood and although not by any means a hard climb it gives fantastic views. With the assistance of an old OS map I planned a route that would take me ultimately to Rhenigadale.

I got underway by 8am and soon reached the fence that marks the start of common grazing land, even at this modest height I was enjoying the views. The attachment IMG_2381.JPG is no longer available Stopping for a drink, I packed away my fleece (never to re-appear on this walk) before heading on for the summit. I was pleasently suprised to find that it was still before 9am, I must be getting fitter. The light was fantastic and perhaps if I had any skill with a camera I could have captured it, but I am very much a point and click photographer. It was round about this time that I began to eye up Toddun. I had climbed it once before around 30years ago and although I have a notoriously bad memory, I recall it being well worth the effort. From the TP I headed off North West accross Beinn a' Chaolais with my first goal being to meet the well used path that runs from the lochs at Urgha to Rhenigadale. The going was excellent with only very slight detours required for bogs, I also noticed how much grip there was on Harris rock. Last week I climbed Am Caisteal and Beinn a'Choin and avoided stepping on the rocks where possible after 2 or 3 slips. In Harris the rocks have a rough texture which gives excellent grip even when wet - my young nephew informs me that the rock is Lewisian Gneiss (or something like that anyway).

As I approached Rhenigadale path I saw 2 walkers - the first and only all day - and made my way to meet them. They were holidaying in the Islands and had come to Harris from North Uist. I was really pleased that the weather was so good as they had hardly been able to stand upright with the gales there. We compared notes on how many deer we had seen, 20-30, before they asked where I was headed. Without thinking I pointed to Toddun. That was it decided then. The last section was pretty steep as I decided not to head round to the slightly easier North West side, but it is relatively short and with the good grip on the rocks not a problem. I stayed on the summit for nearly an hour and would have stayed longer if I didn't have to be at Rhenigadale for my lift. I felt completely at peace and could possibly have dozed off if it wasn't for the 2 jets that roared past between Toddun and the Clisham. I could still hear the roar of their engines long after they were lost from sight. No photo's of the jets because although they were very close, like with the deer, I am a bit slow on the draw with my camera. 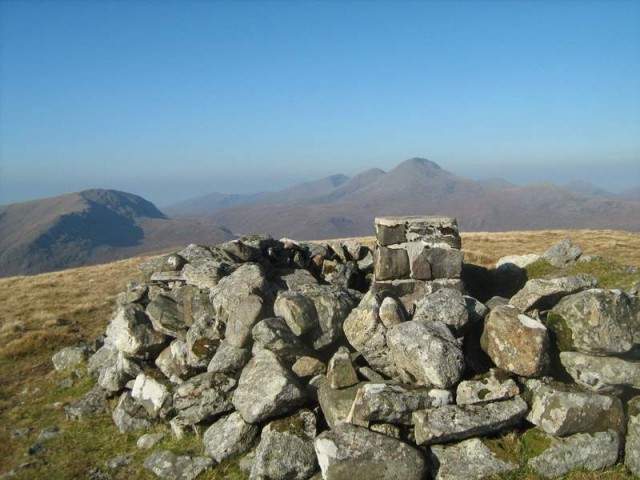 After a straightforward descent from the summit I hit the Rhenigadale road and finished my walk with a couple of miles on the road.

My favourite days walking - so far. This was my first decent length of walk without the comfort of a path, and although I admit that I had great weather conditions, visibilty and some local knowledge to help me- I really enjoyed the fact that I was making decisions all the time around my route.

Dmack wrote:Harris in October and the sun was shining, it was warm and no wind...I still can't believe it.

not at all jealous

no really, not at all

Hope you get the pictures sorted out soon, can't wait to see them.

I've not tried to post a photo to this site so can't offer much help but it looks like your photos are just stored on your computer. There is a post here about loading photos to a post - maybe it will help.

Fixed it but lost captions.

In the middle of September myself and a friend travelled the whole of the Outer Hebrides over 9 days. We stayed in Leverburgh in Harris, which i found to be quite an unfriendly place. Although the hostel we were staying in Am Bothan, was absolutely amazing, and definitely recommended.

My friend wasn't very well, so we stayed indoors most of the time during our 2 night stay, but we did see Rodel Church which was beautiful. Driving up to Lewis i realised Harris was the most stunning island out of them all. It was such a shame we got to see so little, but i will definitely, definitely be back. Your photos have made me more determined!
Plus, our trip to St. Kilda was cancelled due to the strong winds which was very disappointing. Even more of a reason to go back!

Lovely - Todun has always stood out on the map for me, so good to see a report on it. Although I've very briefly visited this area, I still haven't done any walking in the Western Isles. Something for the 'to do' list next year I think!

I've wanted to do Toddun for years ever since I saw it looking as it does below! What a spectacular hill! I even walked past it once on a walk from Tarbert to Rhenigidale via The Scriob (what a steep path that is!) and was going to go back via Toddun and then Laxadale (Lacasdale) lochs but the hill went into thick cloud so I thought I'd leave it till another time... that time never came

All my friends there will forget me soon

Lovely pictures - well worth waiting for - thanks for sharing.

Users browsing this forum: Alan B, GordonMcKiernan, Lifeonloop and 78 guests