Been a while since we did this one. Will try and remember some details, though doesn't seem that important just now, having recently lost Thomas, our son in-law. An amazing, beautiful, husband and dad, friend and inspiration to so many. viewtopic.php?f=9&t=54379

Forecasts had been looking windy, but it looked like our day would be dry and have good visibility. N.B. "Looked!" It was an early start to a long day, specially for taxi driver, Big Jasper. Arrived at the car park and struggled to raise the hefty £4 between us, for parking. It was certainly breezy as we left the place of refuge, (Spittal) and was to get considerably worse, as we followed the route, pretty much as per WH's. Meikle Pap, on the way in. Looking back to Mount Keen.

Enjoyed a brief chuckle as two fellow walkers struggled to cross the Allt na Guibhsaich. I think one would have strongly disagreed with the WH's route description

I guess it just depends where one tries to cross. We were treated to a lovely rainbow, much of our march towards the bealach between Lochnagar and Meikle Pap, while a glance over our shoulders revealed Mount Keen, to the east. Less enjoyable were the intermittent showers, howling wind and mist covered crags, however managed a few photo's, on our way round to the summit. Met a couple who had turned back at the bealach and strongly suggested we might wish to do likewise, then were passed by a couple of lads there from up Aberdeen way. They were moving much quicker and heading down by 'the' waterfall, so soon left us behind. It was barely possible to stand on the rocky outcrop, which forms the summit of Lochnagar. Took us about two and a half hours to there. A couple of times we were near knocked off our feet, as we sought shelter to grab some grub and give some thought to our next move. Despite the predicted increase in wind speeds later, we felt safe to carry on, while visibilty and precipitation were expected to remain satisfactory. Over to The Stuic and second summit, Carn a'Choire Bhoidheach, barely distinguishable, off to the left. We got an occasional glimpse of the crags of The Stuic, mostly cause we had our heads firmly fixed, looking downwards as we made for Carn a'Choire Bhoidheach, a true non-event of a Munro. Fortunately for us today was not the day of doom, despite the lack of snow

Was a bit more of a climb up to the third top, Carn an t-Sagairt Mor, especially as the wind was driving in another squally, shower. Strolled around a bit looking for plane wreckage. None of that nonsense for Big Jasper A view down to Dubh Loch. Remains of the English Electric Canberra B.2, which crashed almost exactly 61 years before, on Carn an t-Sagairt Mor. Jaf, Cairn Bannoch summit. Very near blown off his feet at this point.

Took a bit more care and attention to navigation here, as suggested and soon found Munro four, Cairn Bannoch. If I remember rightly, it was Jaf's turn to be nearly knocked sideways, off his feet, as he stepped onto the summit. Wild

From here, Broad Cairn doesn't look far off ... and it isn't

It had taken us about five and quarter hours to make it onto the last summit, however I don't think either of us was much looking forward to the 6 miles plus, walk back to the car. The wind takes it's toll on fitness, as well as the hike. Myself, wisely choosing to keep to leeside, Cairn Bannoch. Loch Muick after the last top. Looking back up to crags of Creag an Dubh Loch and Allt a'Choire Bhoidheach. Began to enjoy the views of Loch Muick and looking back to the fine crags of Creag an Dubh Loch. Finally managed another much needed, refuelling stop, on the lee side of a shed, below Broad Cairn. The walk out was pretty much uneventful, aside from the occasional deer, good views and spying other walkers here and there. Finally, back to the car in 7.4 hours. It was a good circuit, but I think we were both feeling a little short changed, having not seem Lochnagar at its best, while the other summits aren't the most spectacular either, as far as we could see Look back up to Broad Cairn and Creag an Dubh Loch, from lower down. 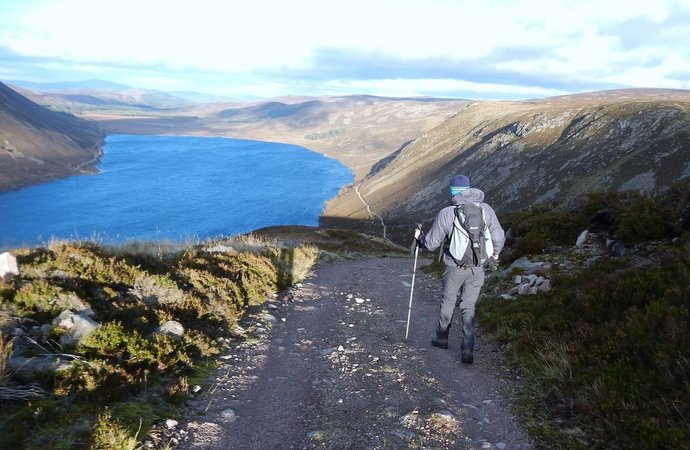 Jaf, heads for home ... well, the motor, about 6 miles away. Home is only a further 4 hour drive! Last look back up Broad Cairn, Creag an Dubh Loch and The Stulan.

Talking of feeling short changed, we were both a bit stunned at the hefty price of our fish, chips pints, in MacKay's Restaurant, in Pitlochry, tasty though it was The (ugly) Old Man, of Lochnagar!