A 2 day trip that nearly didn't get off the ground. The intended day of travel Thurs 30/11 was a bad day in the NE of England. Heavy snow blanketed the coastal regions causing traffic problems and the weather gradually worked inland to where we were. I had been packed and ready to go and set off in worsening conditions around 1pm expecting to take a couple of hours to get up to Selkirk. The first port of call was the Hexham area which gives access to the A68 which normally takes 15 minutes but in the condition took 50 minutes. Knowing that the west was clear I gave the A68 a miss and headed off to Carlisle up the M74 up to Moffatt only to find that the road to Selkirk was closed!. The diversion was to go via Peebles and Innerliethen, quite a distance so I tried the road over Talla and Meggett reservoir's only to find it frozen over so the full diversion it was cutting over from Innerleithen to the Gordon arms and down into Ettrick, still driving at 17.30hrs. The things we do for a trip away!
Got parked up easy at the head of the bothy and took the pre packed backpack ,rucksack for the next day and fire starter logs for 2 days and began the walk up Over Phawhope bothy which is only 20 minutes up the forest tracks. Got to the bothy quickly and found it surprisingly warm at 7C even without the stove on. As the bothy was empty I selected the bottom bedroom figuring that the door was better at keeping the mice out than the top bedroom door. Unpacked I realised that I had left my "water of life" bottle in the car safely packed so it was a pleasant moonlit walk back to the car and return to the bothy. Now in for the night the stove was lit and the temp raised to 12C, quite pleasant considering it was frozen outside.


our_route.gpx Open full screen  NB: Walkhighlands is not responsible for the accuracy of gpx files in users posts
Over Phawhope Bothy

The days route was the Ettrick horseshoe, or one version of it. The route goes straight from the bothy door and ascends via a marked track up through the forest fire gap. I ascended quickly and I think I was on the top of Ettrick pen in about 1hr 10mins. From there it was a simple case of following the fenceposts over frozen ground to Hopetoun craig and then onto Wind Fell, the gradient never harsh. I wandered over to a cairn just shy of the top of Wind fell. I don't know the reason for it, or its positioning but it makes for a superb viewpoint 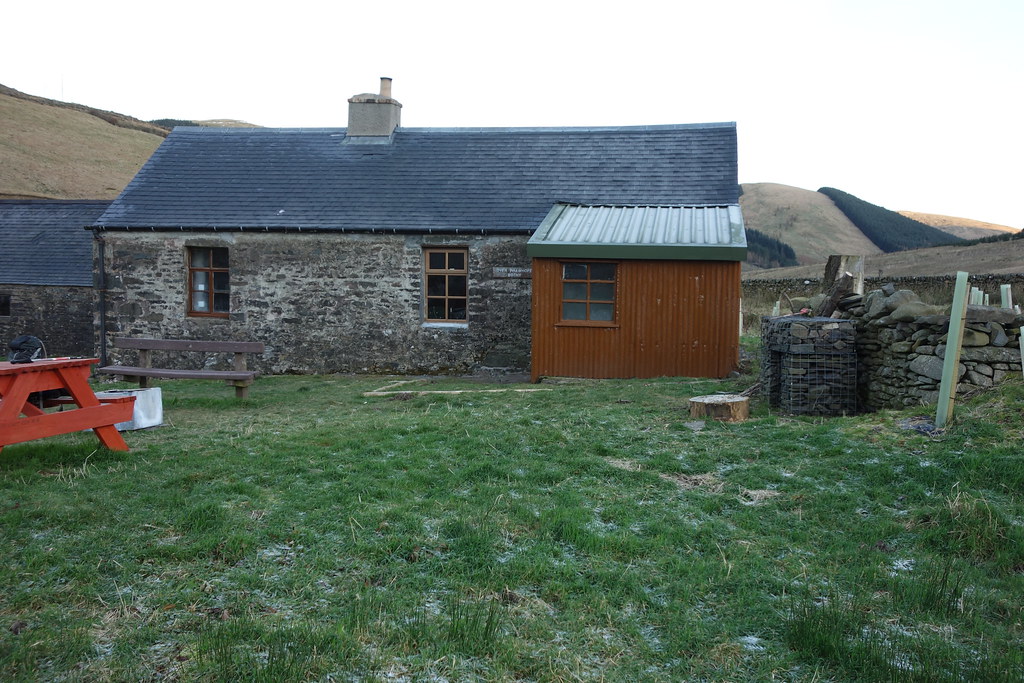 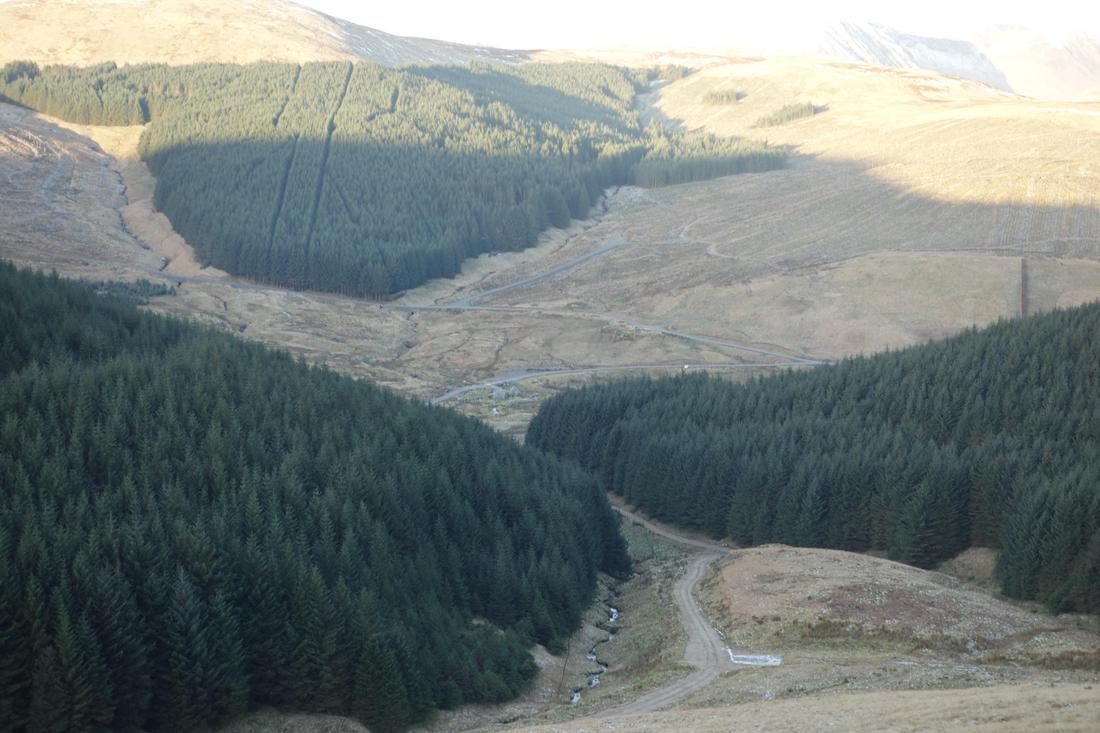 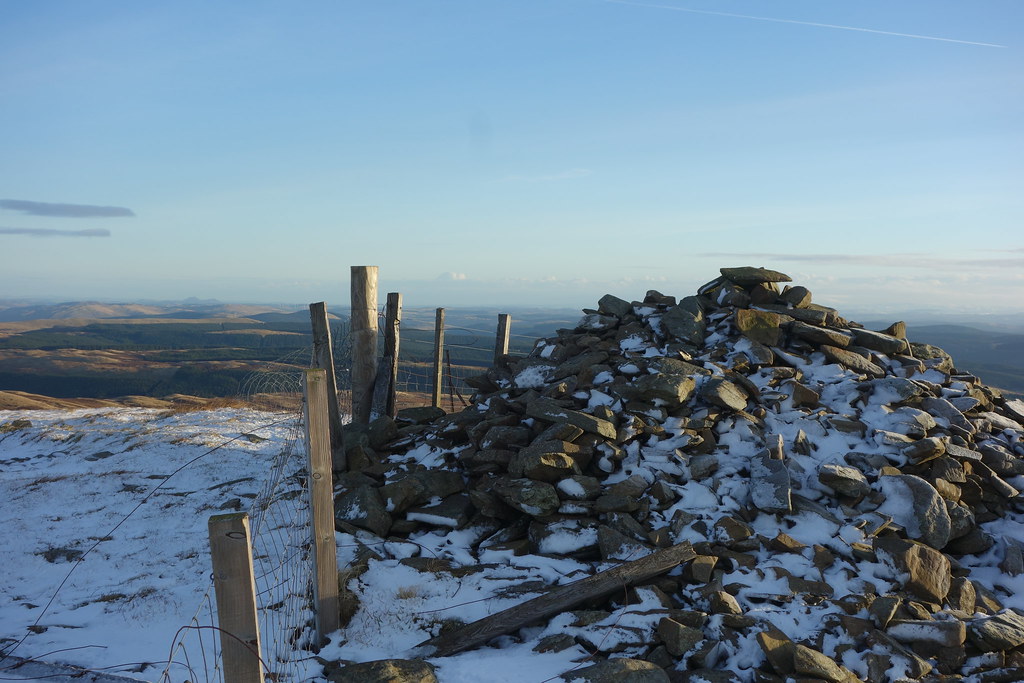 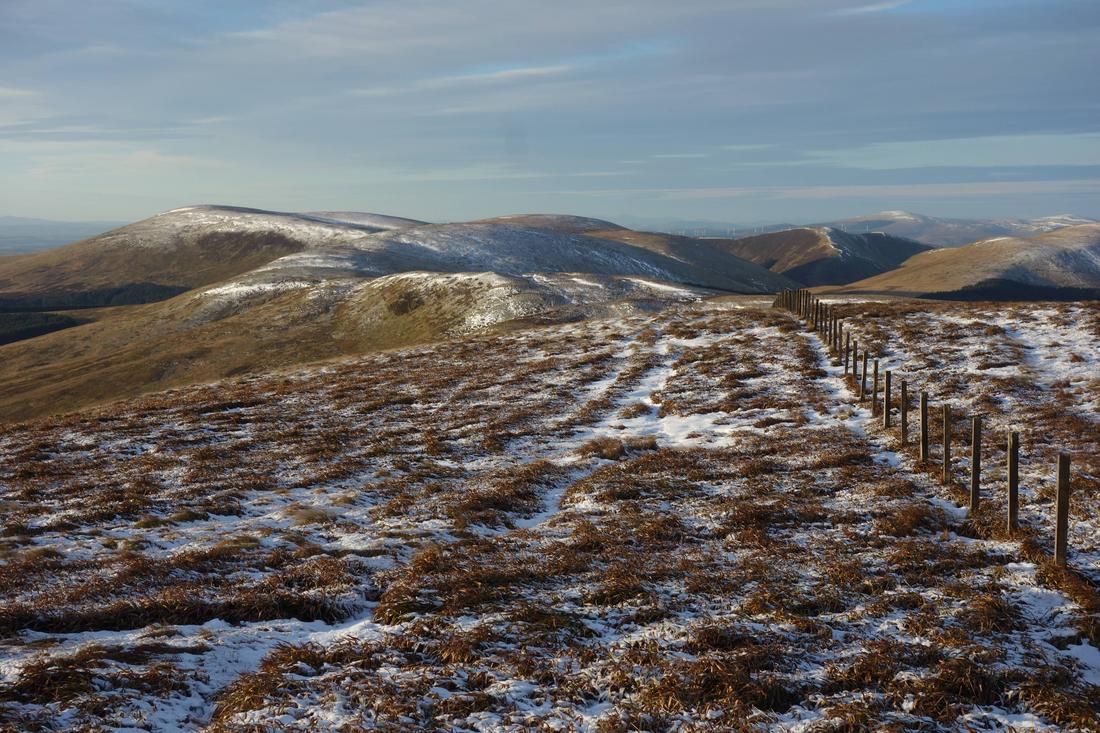 Looking back towards Ettrick pen 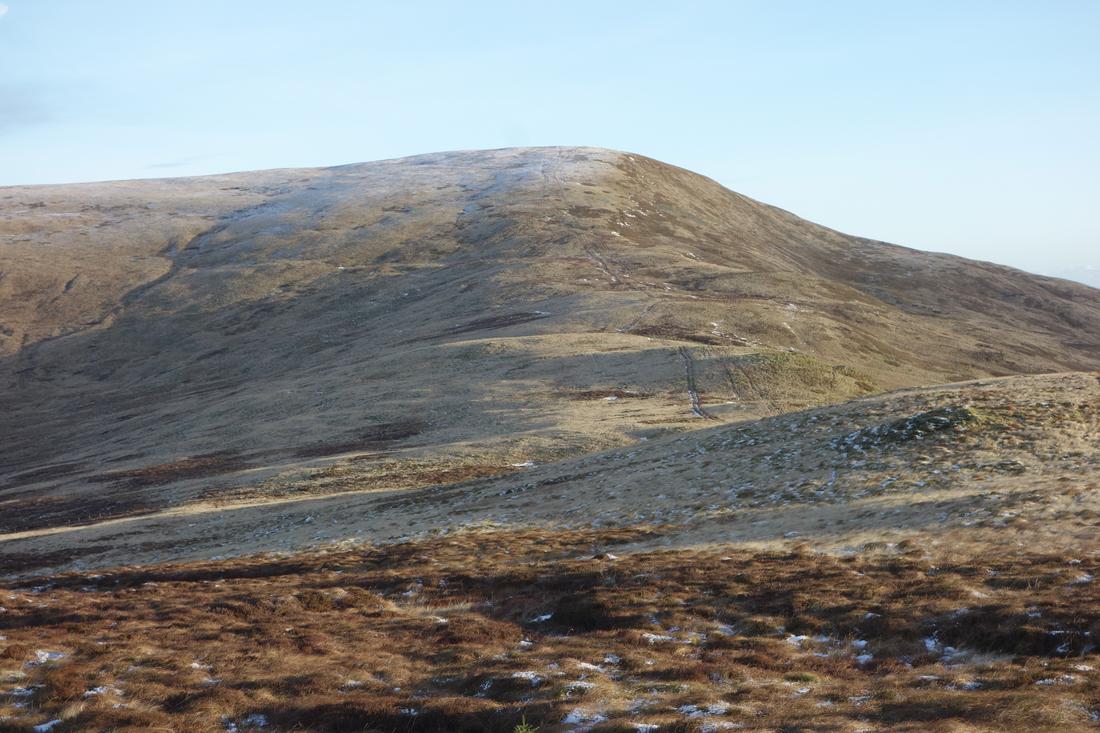 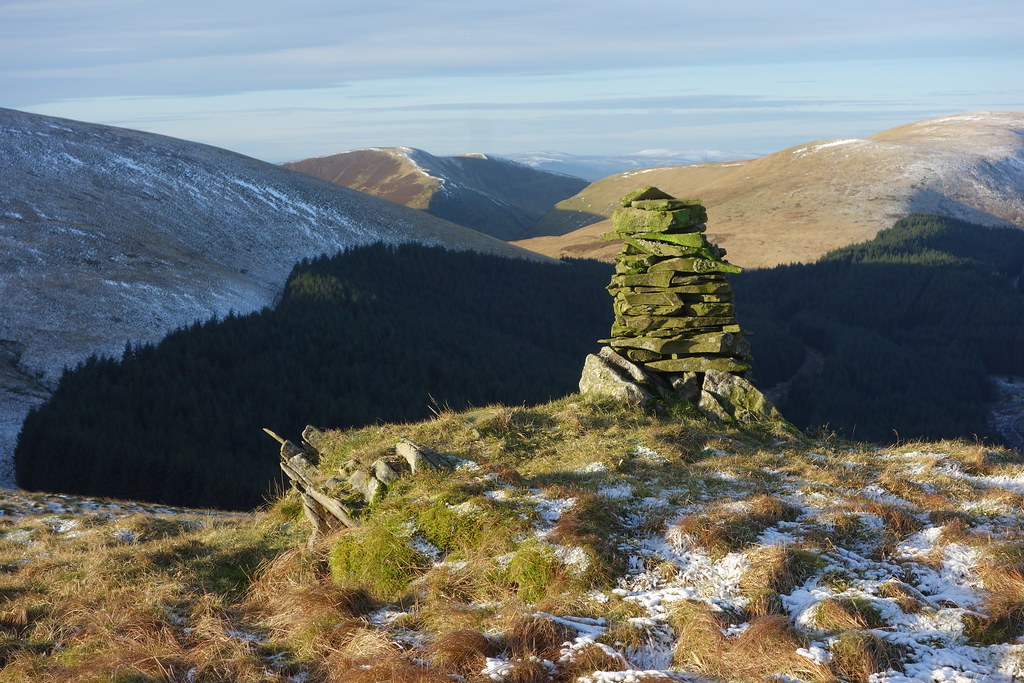 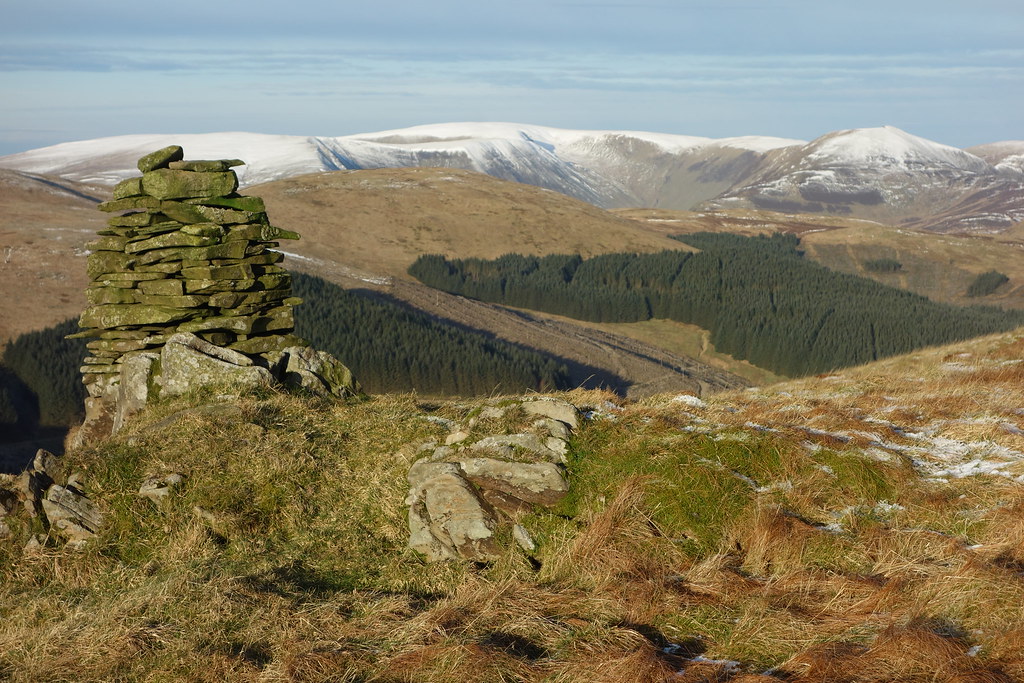 DSC01817
From Wind Fell there is quite a drop down to the col before the gradual ascent of Loch fell where I met the only other Hillwalker of the day. The Donalds are a great secret, they are like the Cheviots, so accessible yet you rarely see anybody. From the top of Wind Fell I went over to the NW top and then the savage descent by the forest edge heading for the sheep shelter in the col before the steep ascent of Croft Head and return to the same point
Loch fell 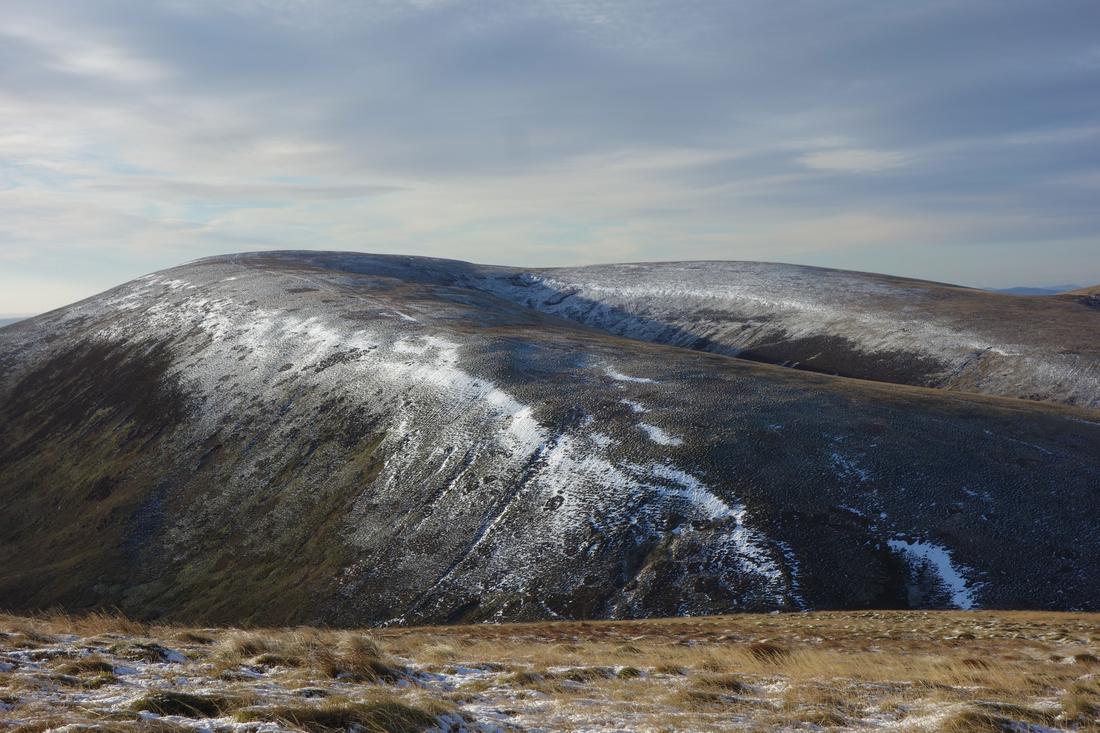 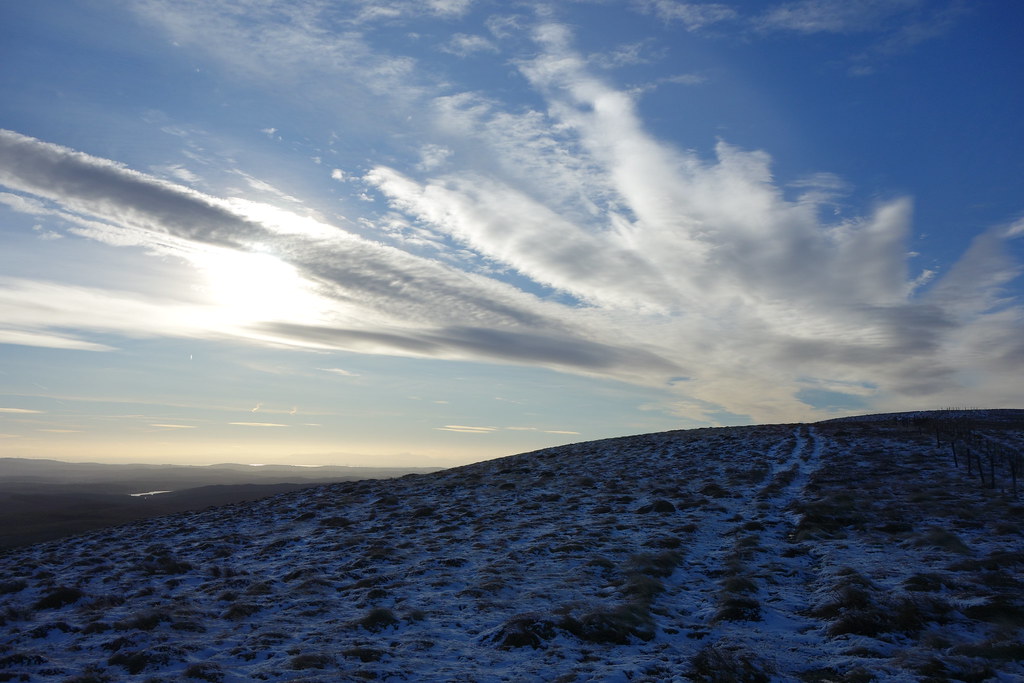 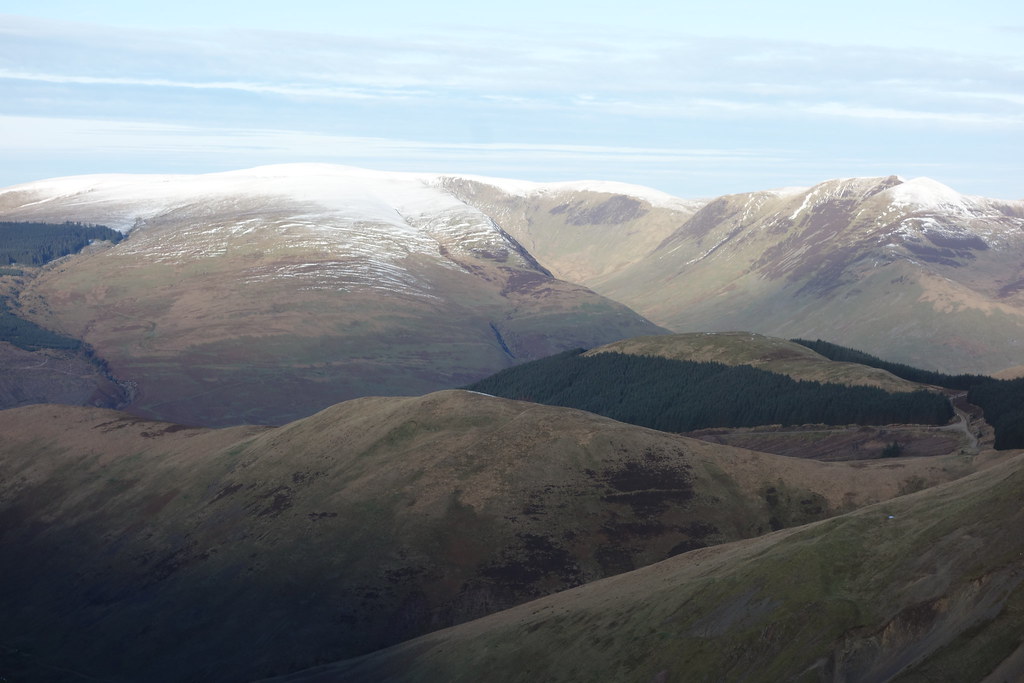 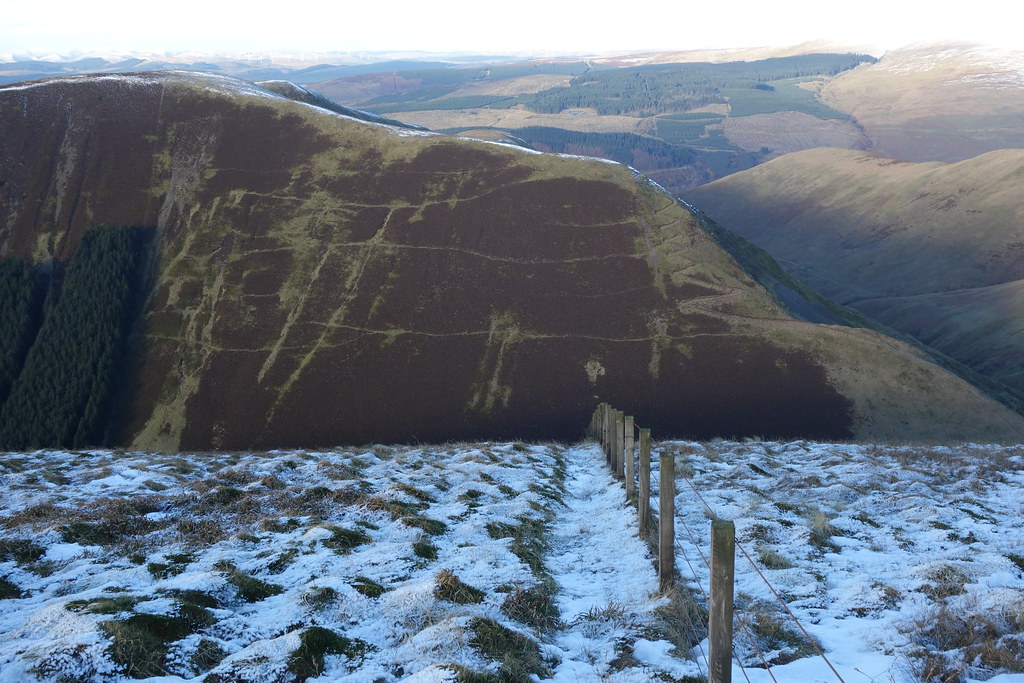 DSC01823
From there the SUW is followed up to Ettrick Head and the grassy gradual ascent of Capel Fell is made. I could have continued on, onto the NE ridge and down to the bothy but I backtracked and went back to the SUW as I'm sure ill have a crack at it quite soon. Easy tracks made for a casual walk back to the bothy where I found Jim, his son Stuart and grandson Harvey in residence and with the fire on at 3pm. Loads of wood had been gathered and cut and they had brought coal. Unfortunately around 7 they decided to go home so I had the bothy to myself again but with all that wood and coal. Such hardship!

View back to Croft fell from Ettrick head 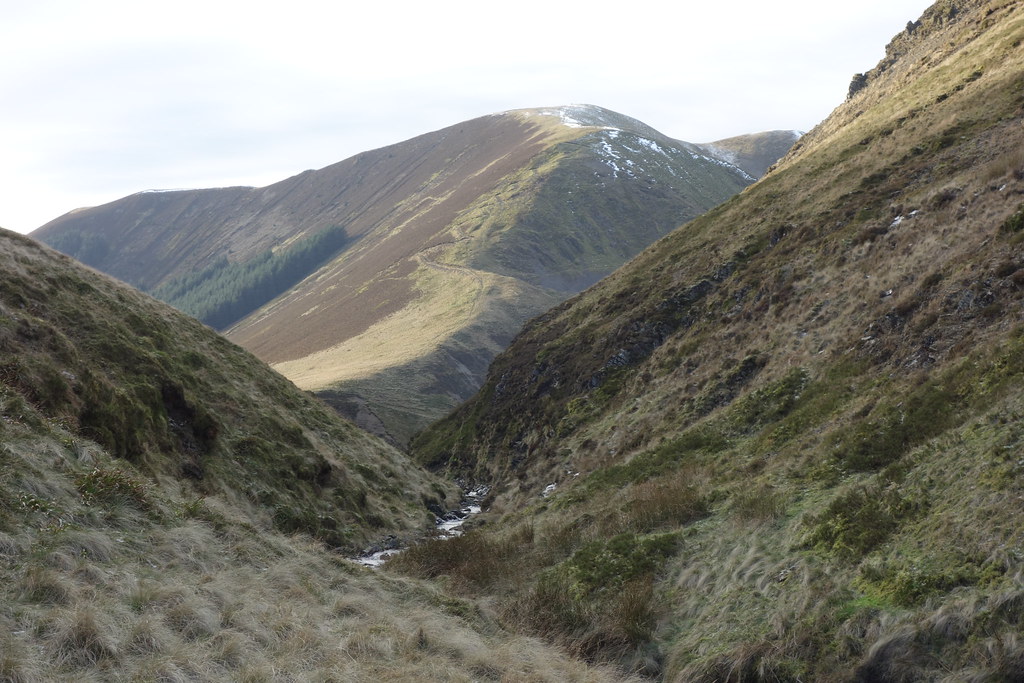 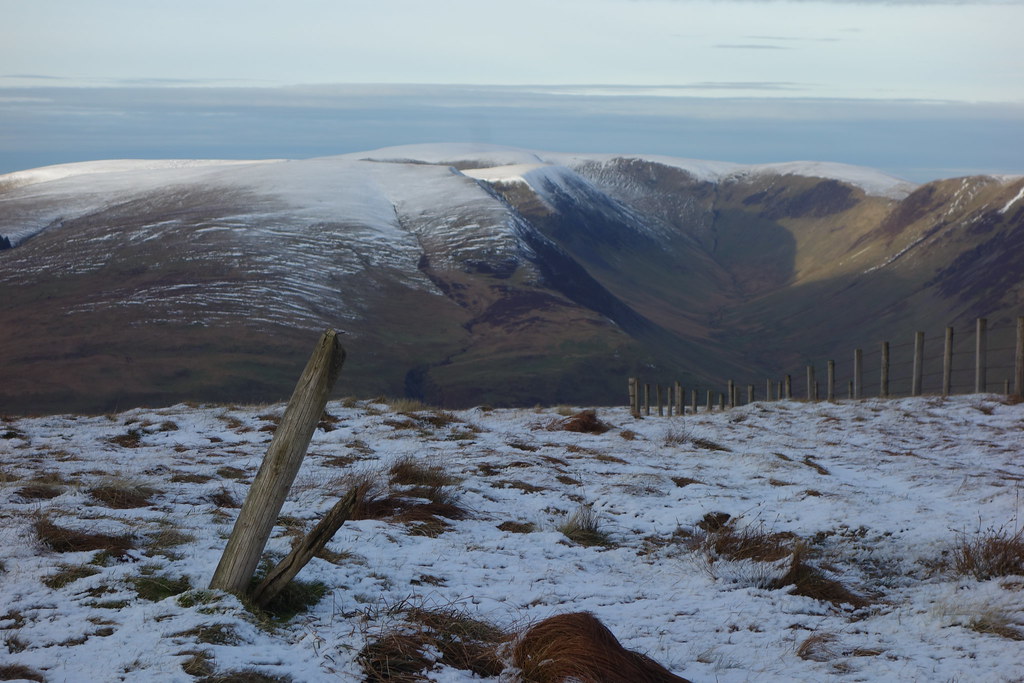 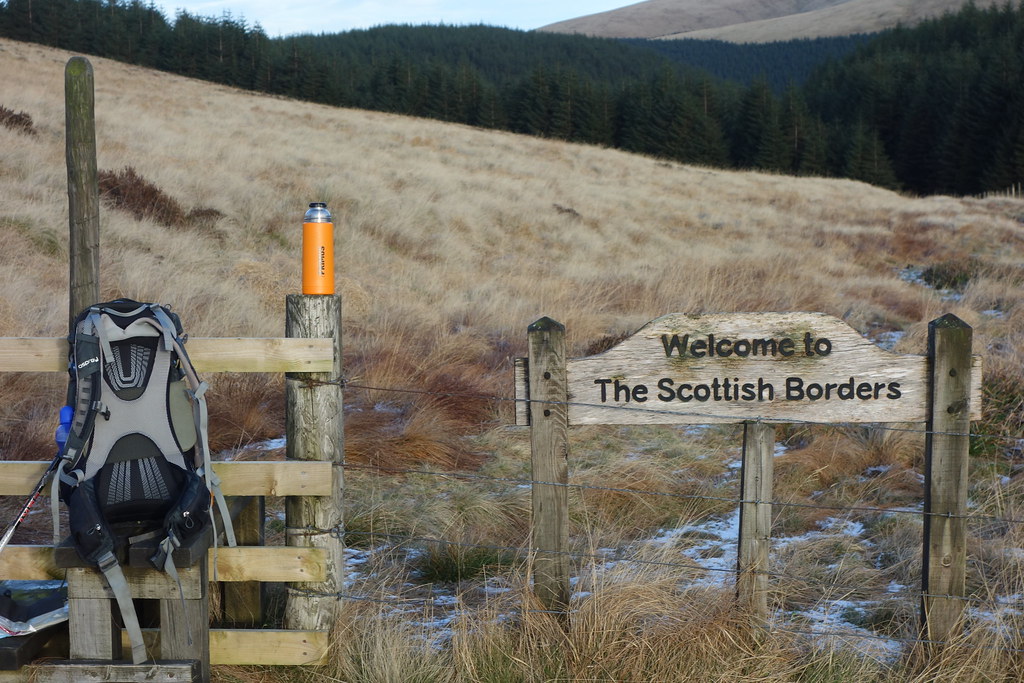 DSC01830
Saturday morning was not so great with lowish cloud and the threat of rain in the air. Walked back to the car with all my gear and drove around to the Grey Mares tail car park. The wind was strong in the glen as I started off up the steep slopes west of the waterfall onto SE slopes of White Coomb walking into the clouds at Rough Craigs. The weather didn't change on top. It started raining and the rain was driven by strong winds blowing from the north. Anybody who has been on these hills will know there is no shelter so you just get on with it. I had put an extra top on , on the top of White Coomb and such was the weather it didn't come off until the car park. I continued on onto Firthybrig head and made a detour to top Molls Cleuch Dod another Donald, before returning and ascending Lochcraig head before descending via the NE shoulder and then S to Loch Skeen following the fence meeting Weaselmaster Al and Alison ascending who had camped at Loch Meggatt the night before, hardy folk indeed!
This was about the 6th walking trip I've had up to the Donalds and I've now done roughly a third. More trips are planned and more involving bothies.
Ascending the shoulder of White Coomb at Rough Craigs 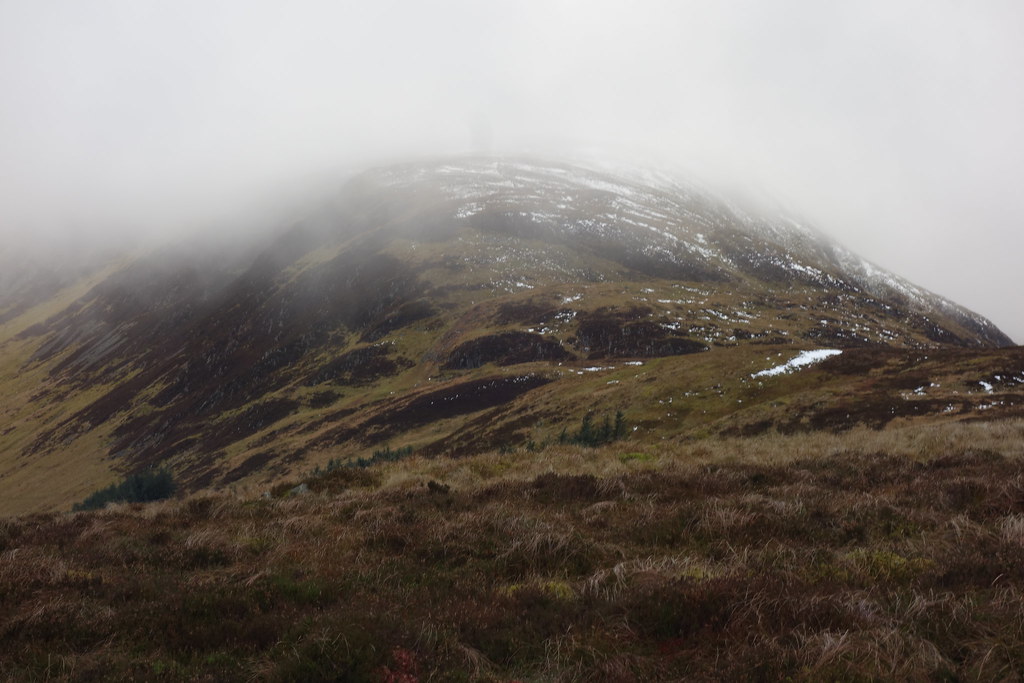 DSC01832
Loch Skeen from the descent of Lochcraig head 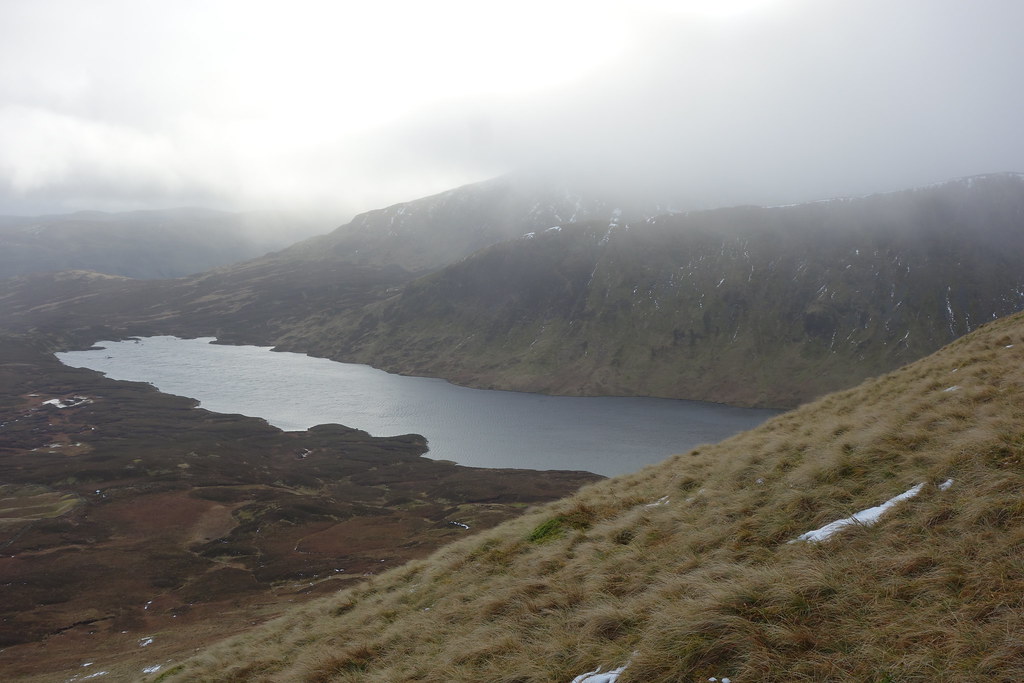 Looks a useful bothy for the Ettrick hills as well as the Bodesbeck Law chain, I never thought to use it. I did them all from the Moffat Water side, which seems a bit daft in retrospect. I enjoyed the Ettrick group in particular and was impressed by the descent from Croft Head by those zig-zags. Like you, I couldn't resist taking a pic of the wooden border sign 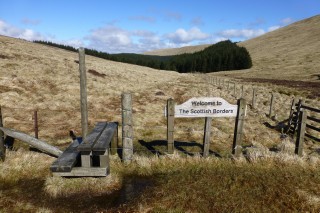 Snap! (minus rucksack and flask)

Nice report & pics GM - the Donalds are great aren't they?

Been scoping out the SUW the more Donalds I do, will do it one day.

dav2930 wrote:Looks a useful bothy for the Ettrick hills as well as the Bodesbeck Law chain, I never thought to use it. I did them all from the Moffat Water side, which seems a bit daft in retrospect. I enjoyed the Ettrick group in particular and was impressed by the descent from Croft Head by those zig-zags. Like you, I couldn't resist taking a pic of the wooden border sign

Cheers Dav, they are great, looking forward to Galloway.

. I can sympathise with the weather on the Thursday - a great day for me to start commuting to work by bike down here

Some of the best and the worst of the Borders hills in this area. Croft Head and Craigminchen Scar are great (although I could barely see my nose when I was round there), and Hopetoun Craig was a spot where I told myself that I'd never bother with all of the Donalds if they were like that! Of course, having a southern perspective on them now, that may change....

Nice bothy too, and has been done up even more since I stuck my head in the door, I think.