A mad plan for me after finding out I had a free weekend and rather than the usual day walk around the South Pennines, I thought why not pack my bag and drive up to the lakes straight from work in Manchester and wild camping to get an early start early and already high on the fells.

First stage was scuppered when I overslept and didnt get my bag packed to take to work, Then work overran and I only got away at 5.30pm than the expected 4.30pm, a jaunt back over the pennines to home in Huddersfield, throw my kit together and was on the M62 by 6.30 pm,


our_route.gpx Open full screen  NB: Walkhighlands is not responsible for the accuracy of gpx files in users posts
My chosen camping spot was one i'd seen in the daylight a year or so ago, so i was confident i could navigate to it from memory along the excellent paths up to Angle tarn below Angletarn Pikes.

With the late start I parked up in Patterdale outside the White Lion at 9pm and was on my way with head torch on over the river and along the lane to find the bottom of the diagonal path up to Boredale Hause.

The night was still and dry as I slogged up the hill and then a pair of eyes ahead, then another above and another and there were at least 6 or 7 deer watching me and moving further up through the braken above me. No-one else seen apart from the occasional car hurtling along the A592 in the valley bottom.

Bordale Hause was reached surprisingly quickly i thought it was higher, but knew i was tehre as the slope widened out and i saw a couple of valve covers in the grass. The breeze also increased to being quite strong as I crested the rise.
This point was where I knew i could go wrong in the dark and end up on the wrong path heading over to Martindale, but my memory was good and i crossed the beck and climbed upwards on a familiar path.
Rounding the corner the wind steadily increased until I was contouring along below the Angletarn pikes looking down in to Patterdale and being blown by the gusts, the worst bit was rounding the small crag at Dubhow Brow but after that i was in the lea of the hill and the wind dropped, this bode well for a good nights sleep.

descended to near teh tarn and found a flat short grassed area right on the path that i had rememebred, and set up camp, Tent up and inside by 10.30pm, an hour an ahalf since parking up, 2 miles and 1000ft higher.

No photos of the night climb but it was fun and ill remember it for a long time,

But heres the next morning 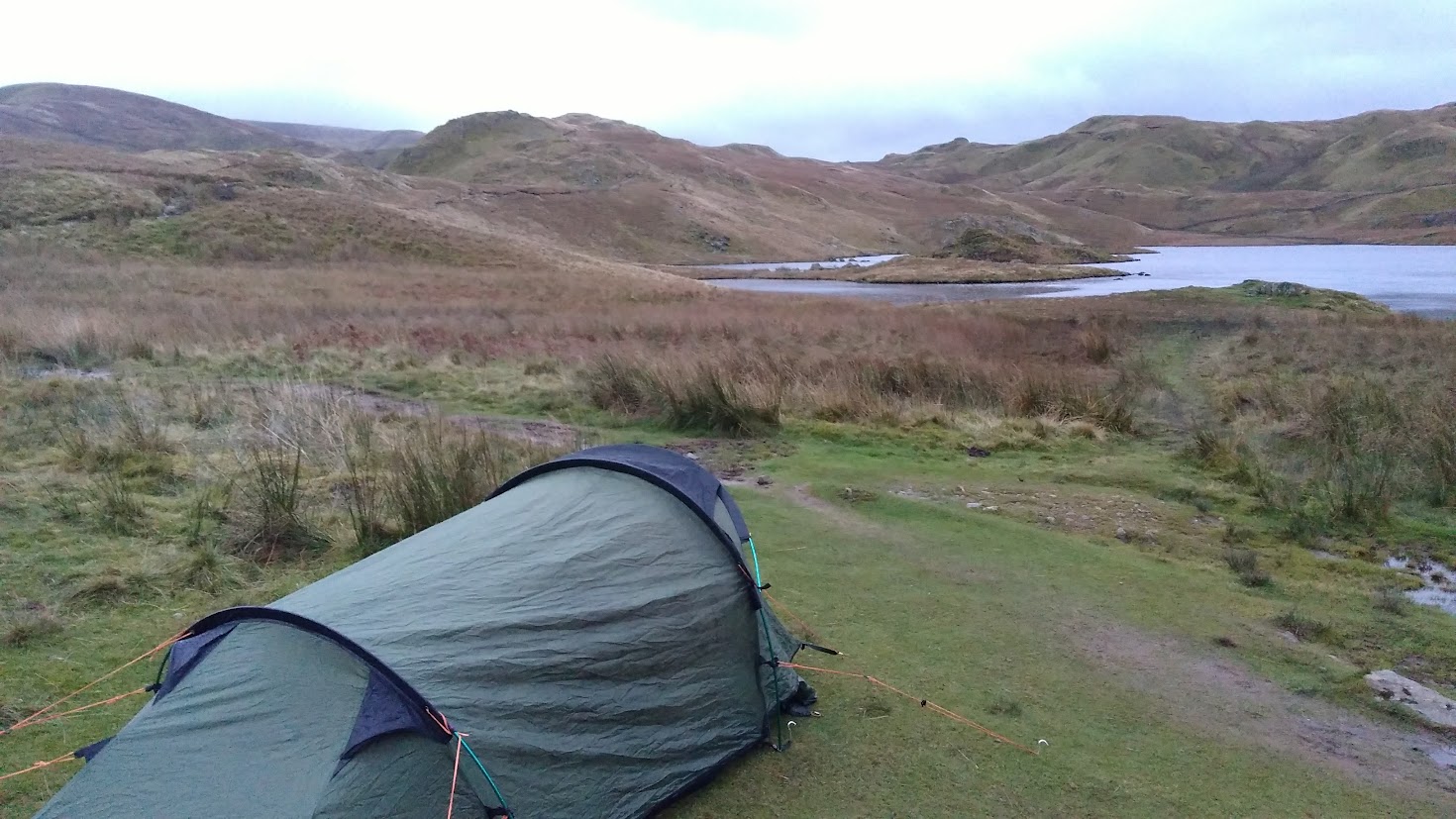 As I emerged from my slumber with a cold nose and crawled out of the tent there were two deer on the hillside behind me grazing but their heads shot up and they headed out of sight, I brewed up and had y can of beans and sausages and lay in the tent door enjoying the quiet and read my book, relaxing, but that ate away at the early start I had been aiming for so it was 9am before i was packed up and headed round Angle tarn heading for the first Wainwright of the day at Brock Crag. 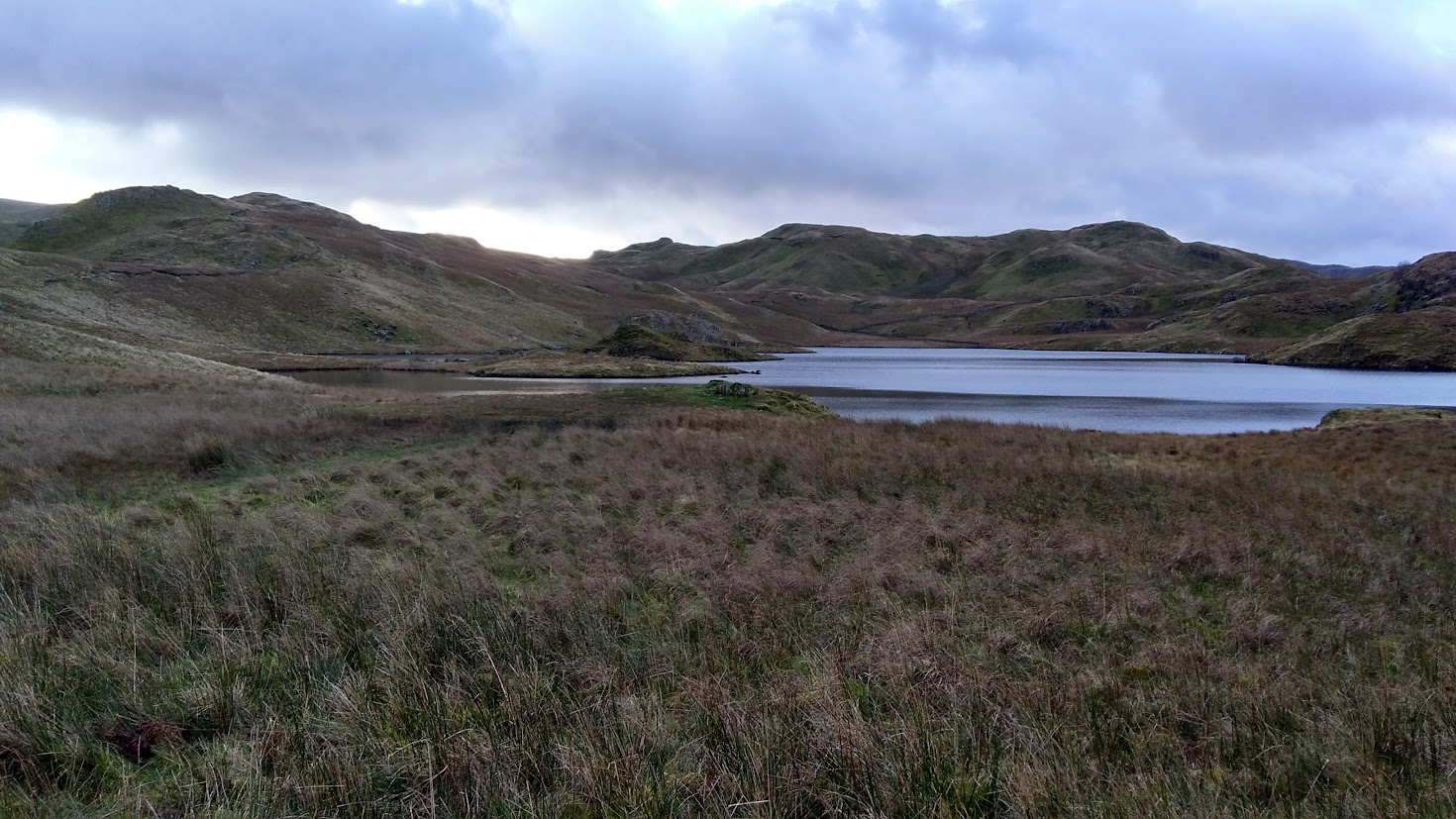 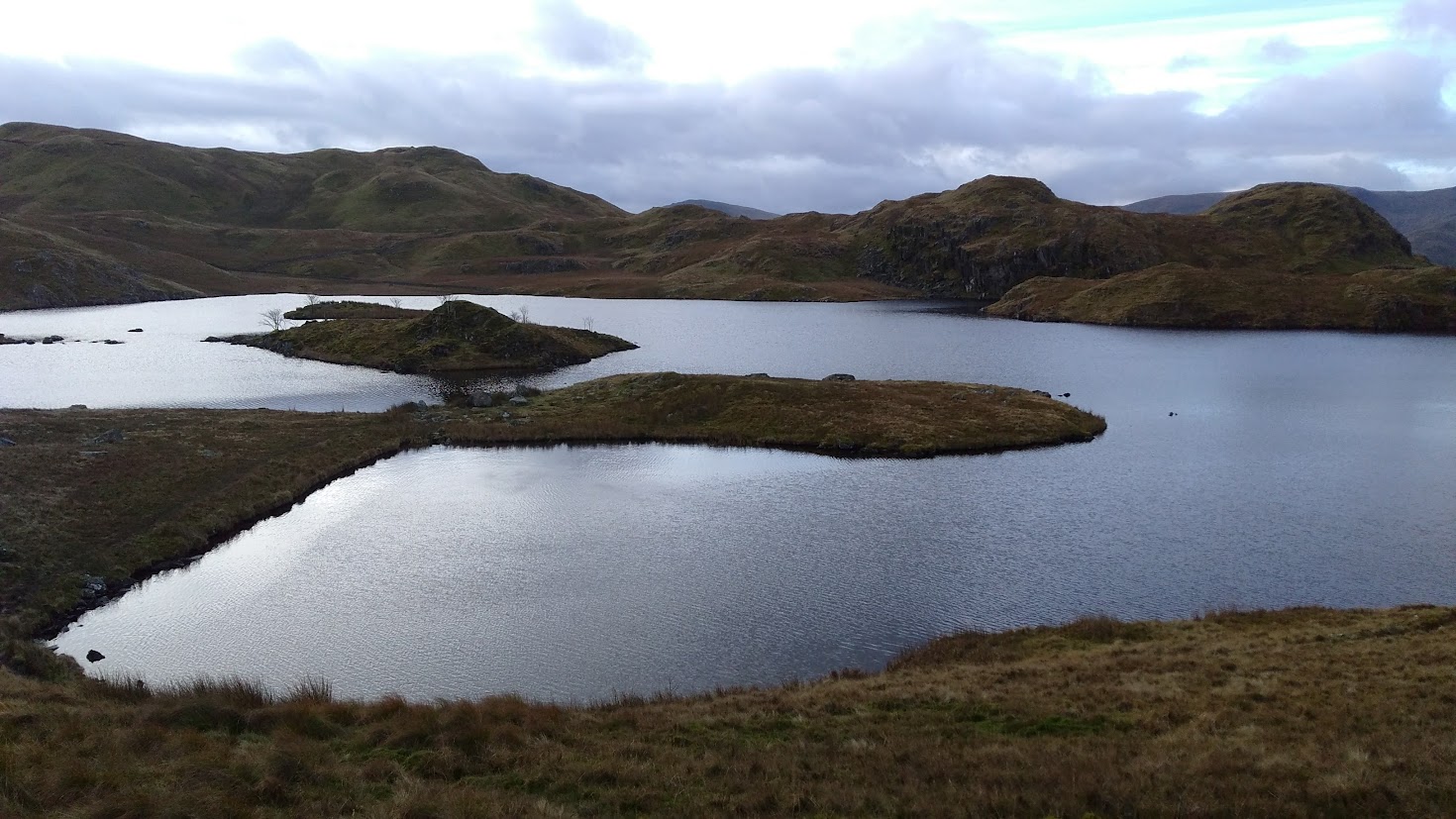 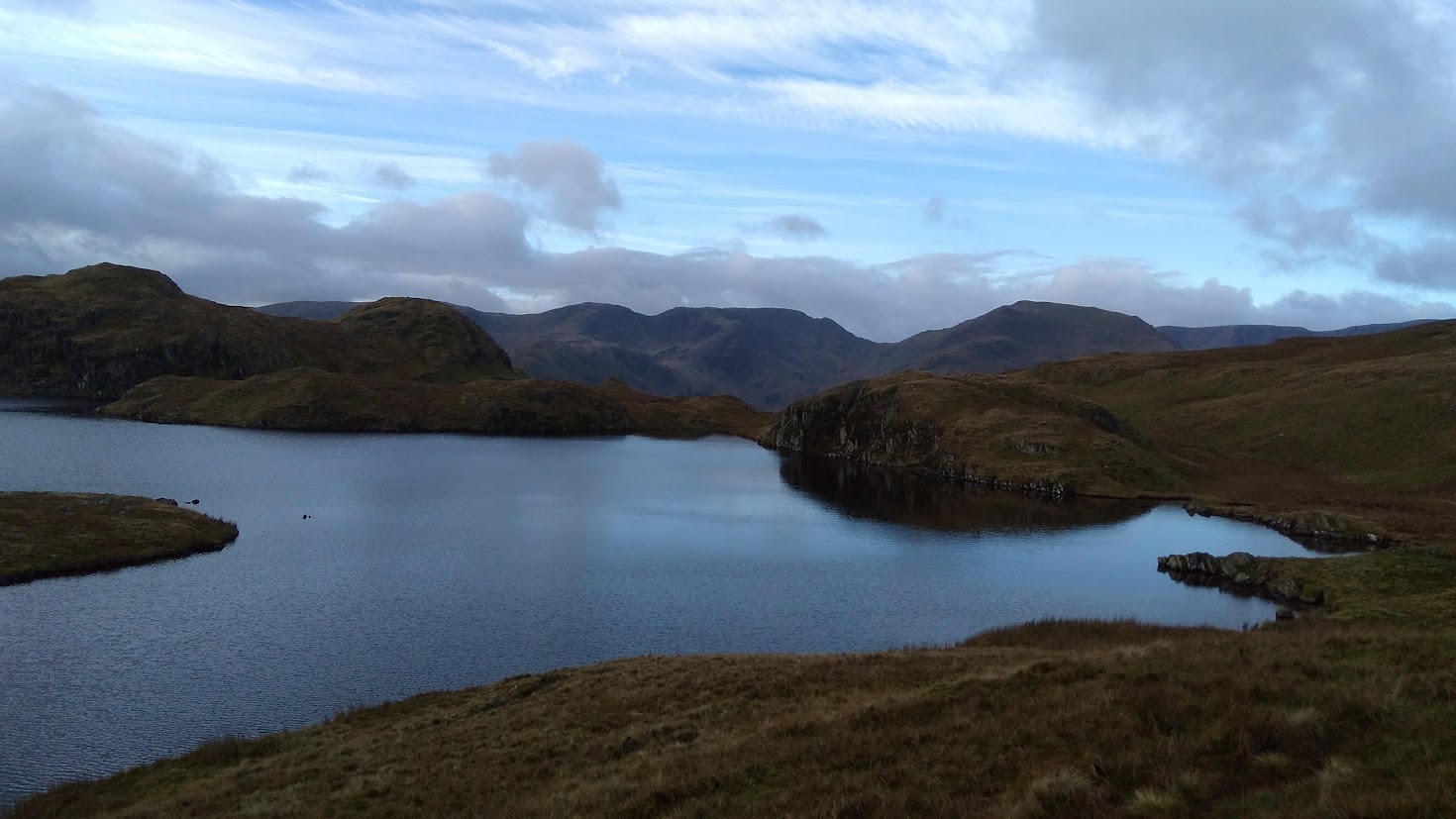 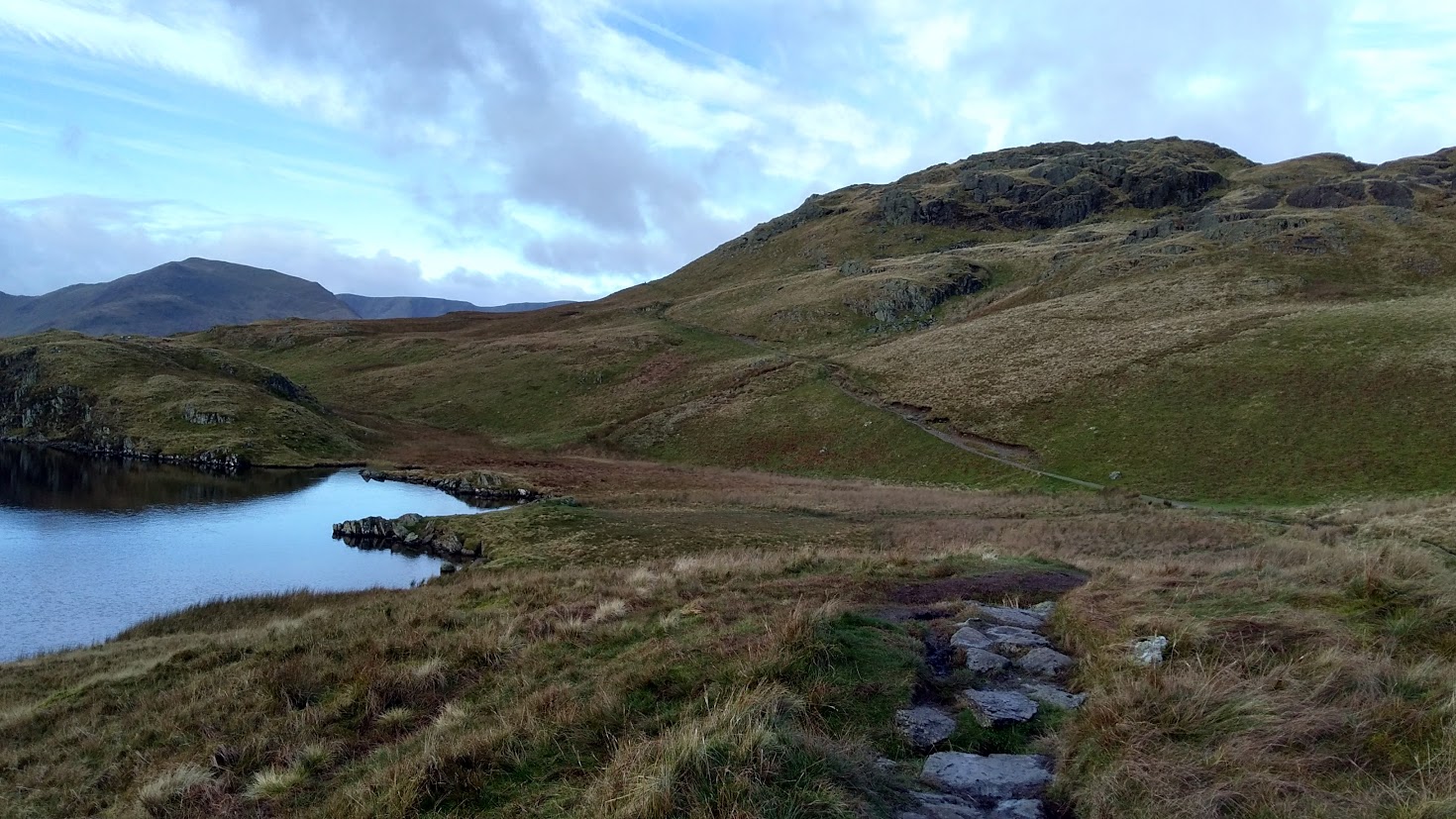 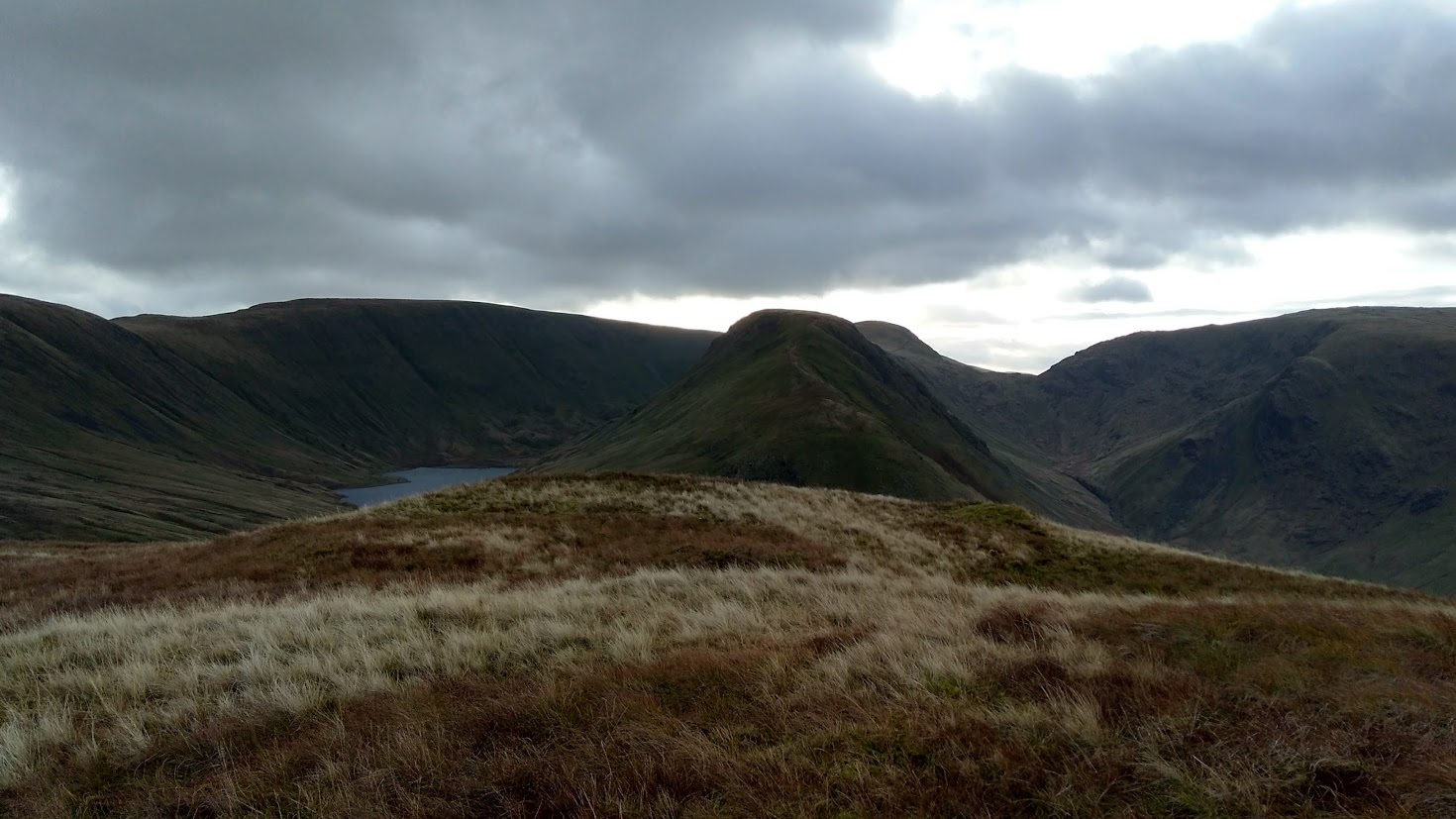 I dumped my bag by the wall to walk over to Brock crag without the weight and had this great view of Grey Crag and Hayeswater nose on. 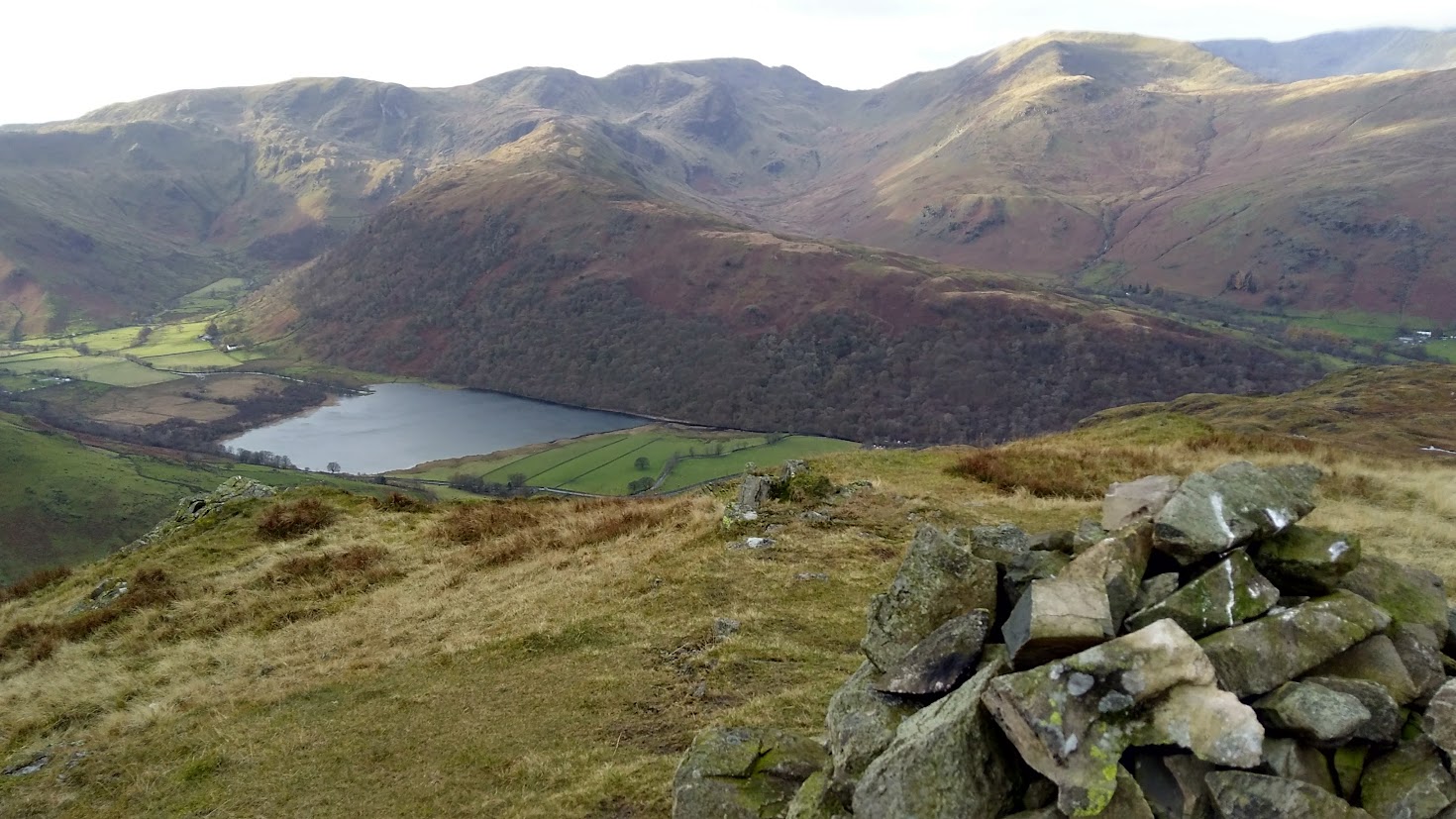 Top of Brock crags with Brothers water below 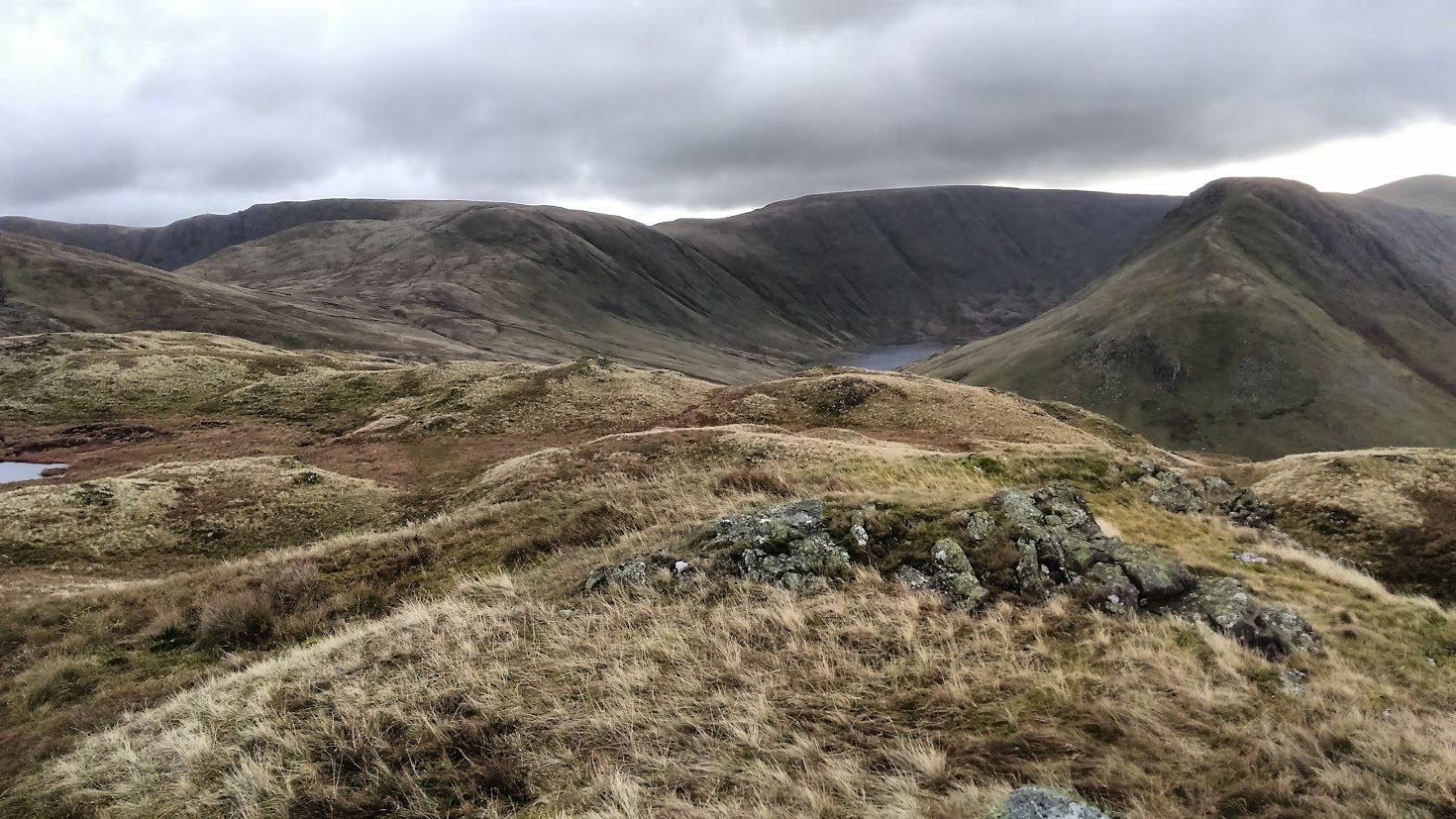 the view of some of the way ahead with the knott, and High street above Hayeswater 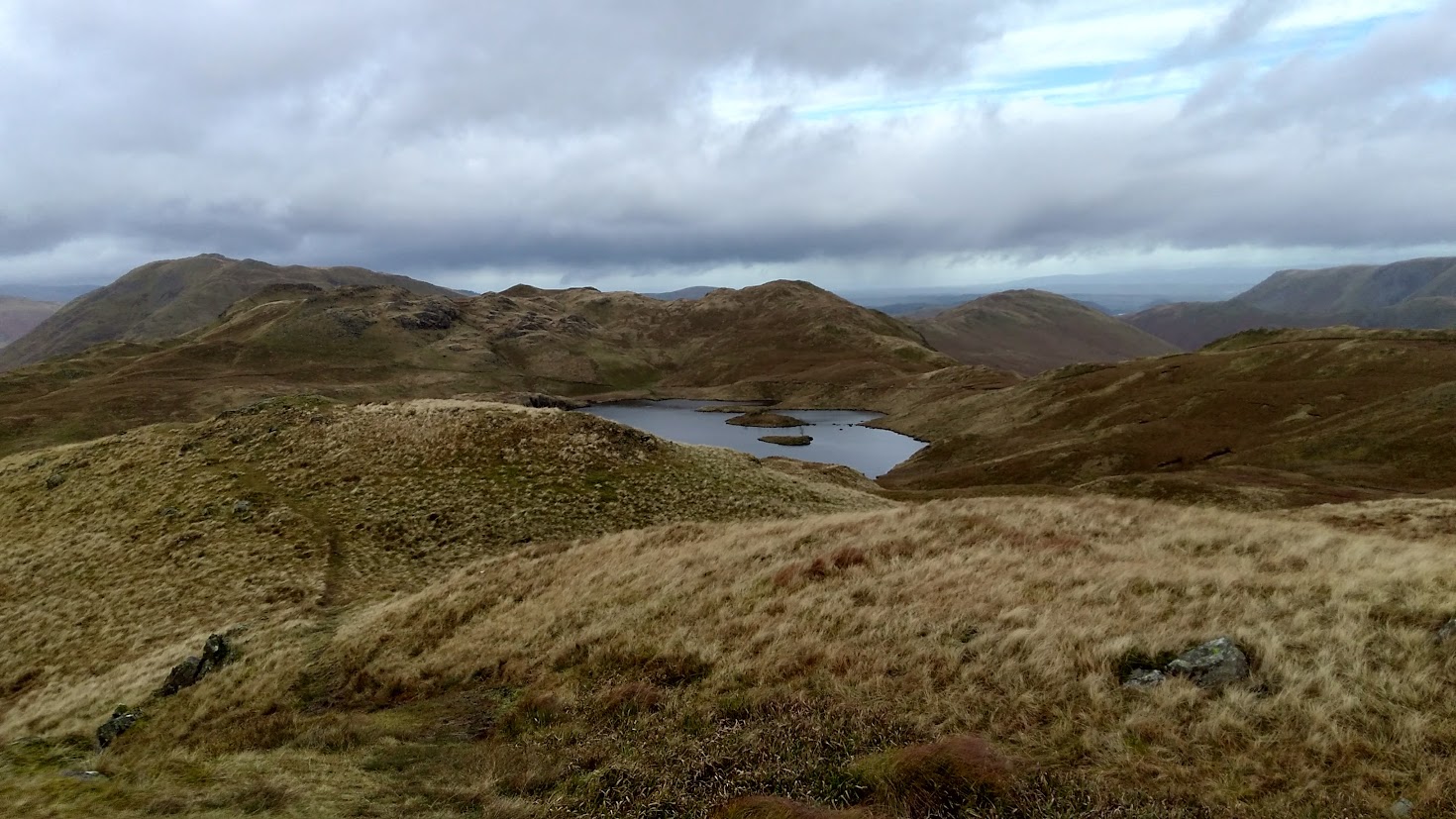 I returned to my bag and heaved it onto my back and set off along Satura crag and then up the slopes of Rest Dodd. i considered the detour along the ridge to the Nab but decided to leave that for another trip up here and continued up to the top of my second Wainwright of the day, Rest Dodd, thats it climbed and from now on will use the detour path round its base. 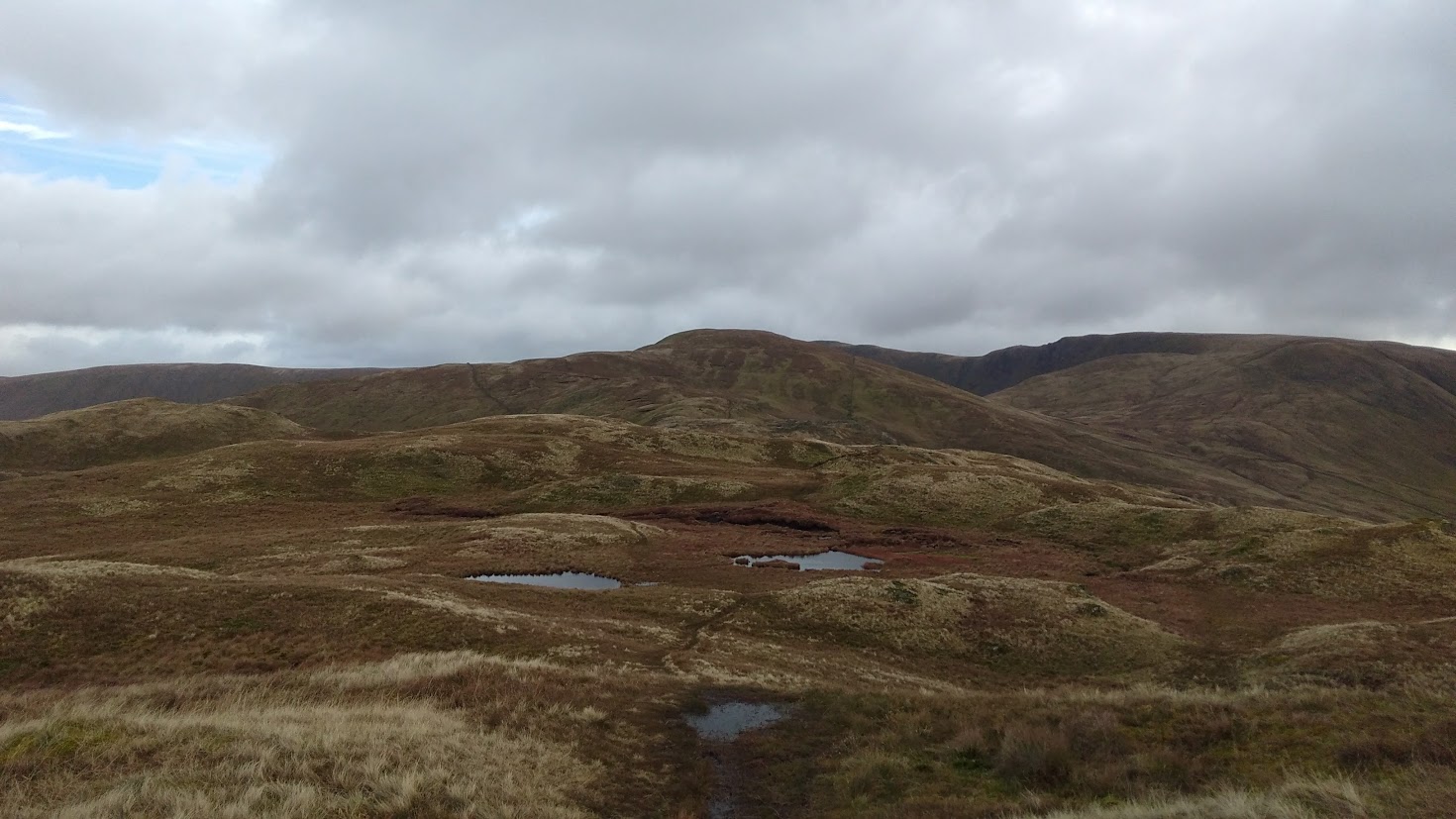 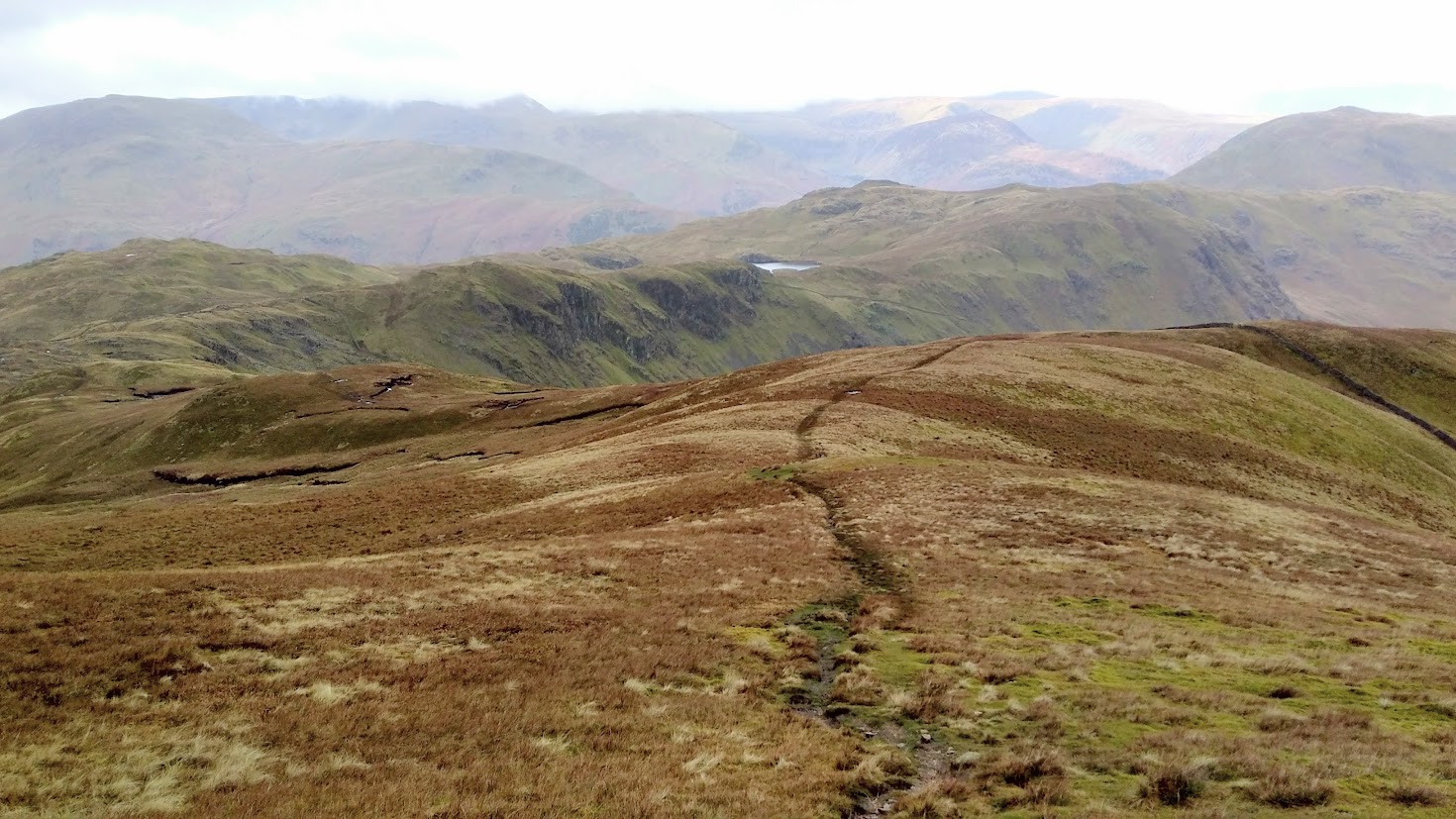 from the slope of Rest Dodd, from left to right; Brock Crag, Satura Crag, Angletarn with Angletarn pikes behind and on the right Place Fell 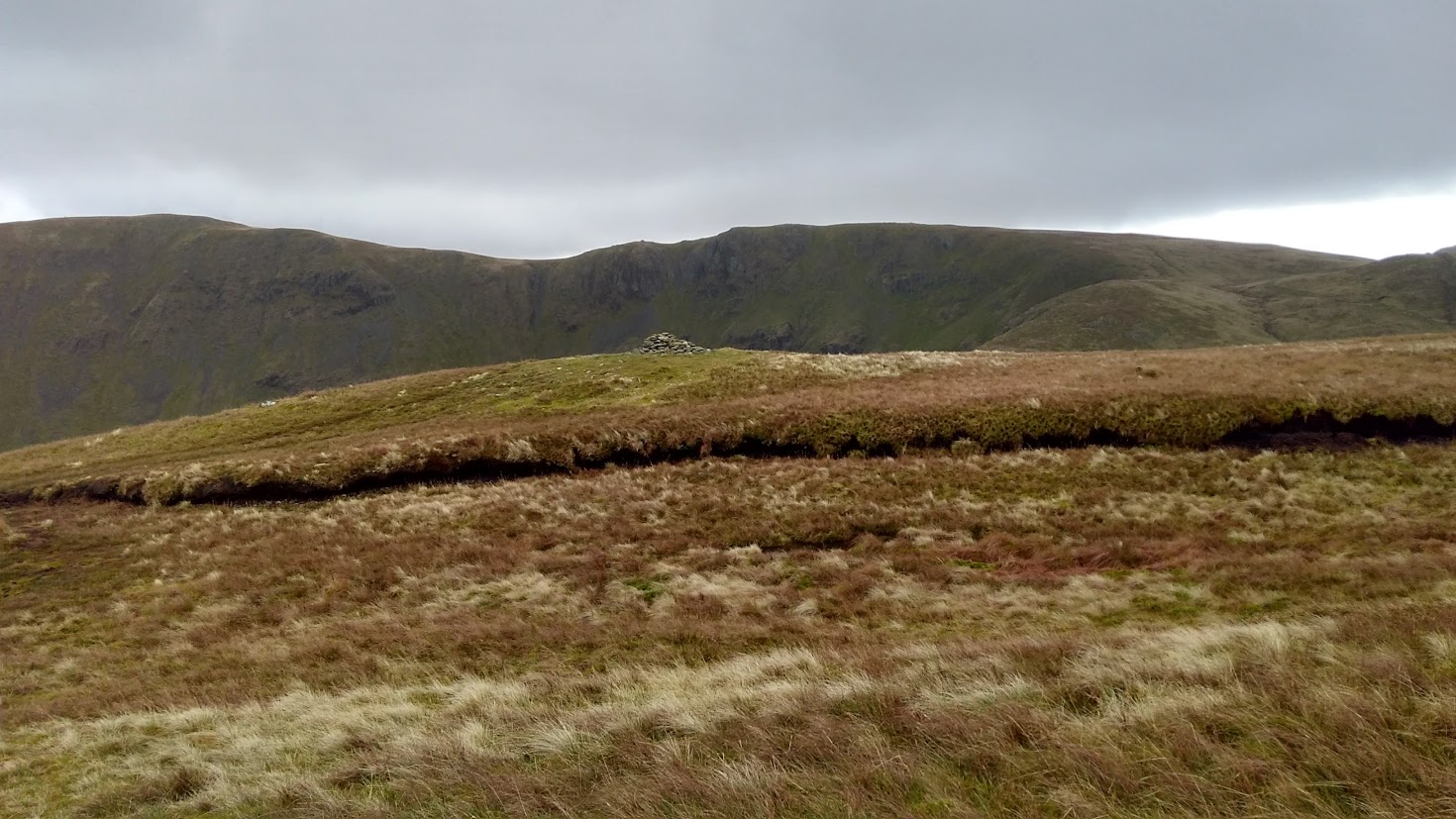 Summit cairn of Rest Dodd with High Raise behind 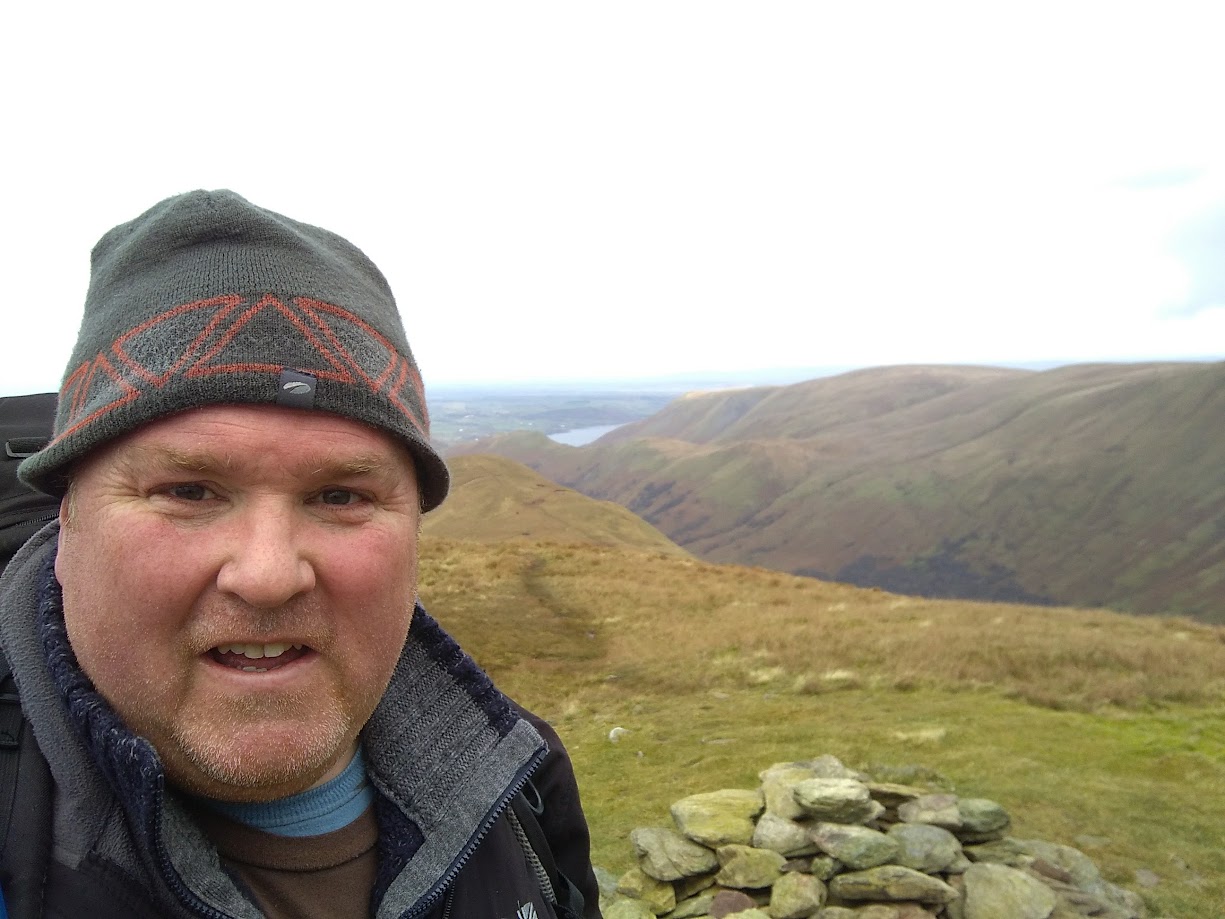 Bargee gasping for air on the top of Rest Dodd, (My best Hill Face) 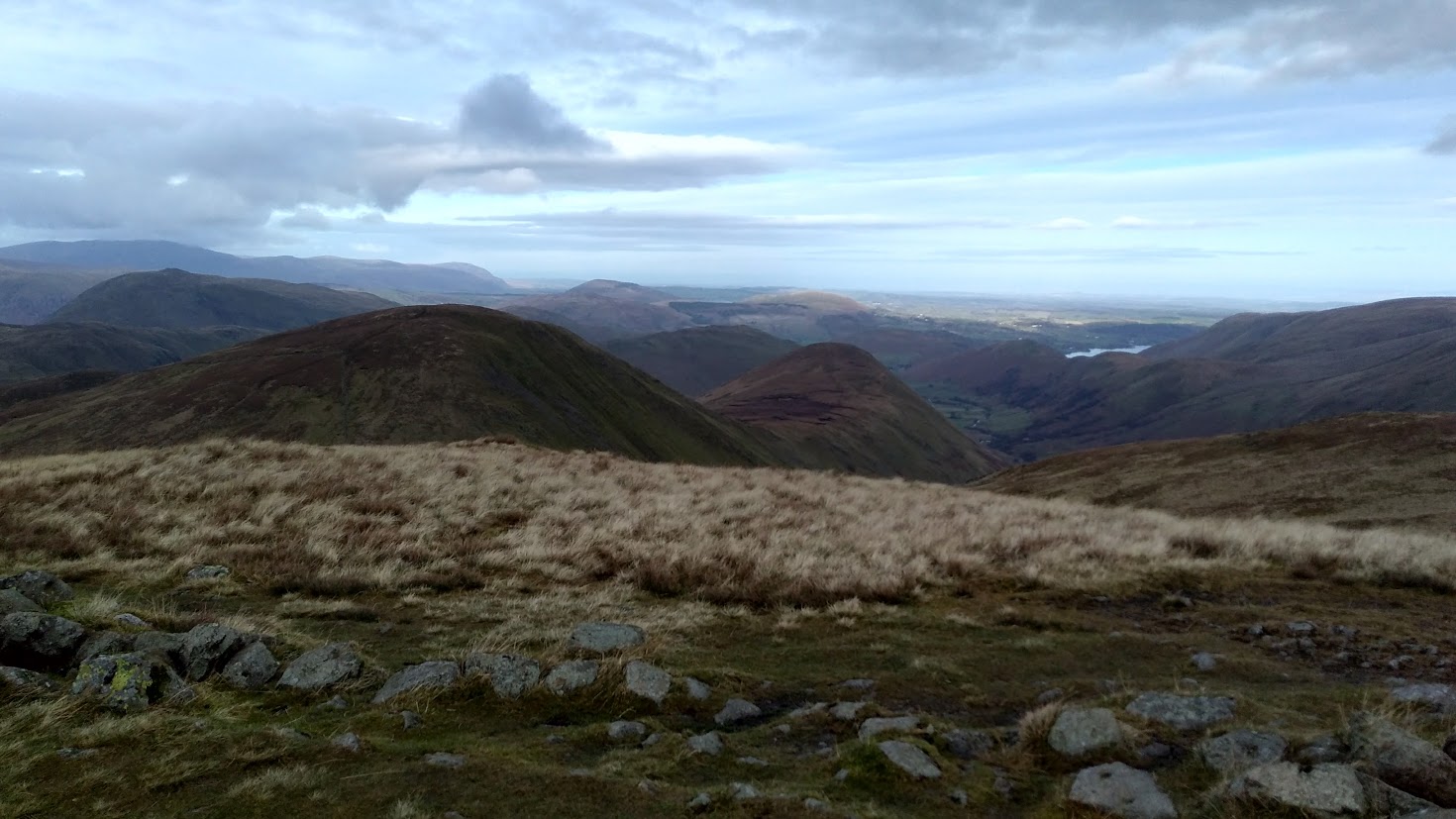 Looking back at Rest Dodd from the top of the Knott.

From the Knott its an easy walk along the ridge to High street and then Thornthwaite crag. On the ridge there were several blokes on quad Bikes and they were yelling, then it became apparent there was a Hound trail race on as a pack of hounds came up the side of the crag and ran past me, I would see them on and off throughout the rest of the day running up and down the steep sides of grey crag and high street, I hope they got home eventually but they weren't phased by the perilously steep slopes. 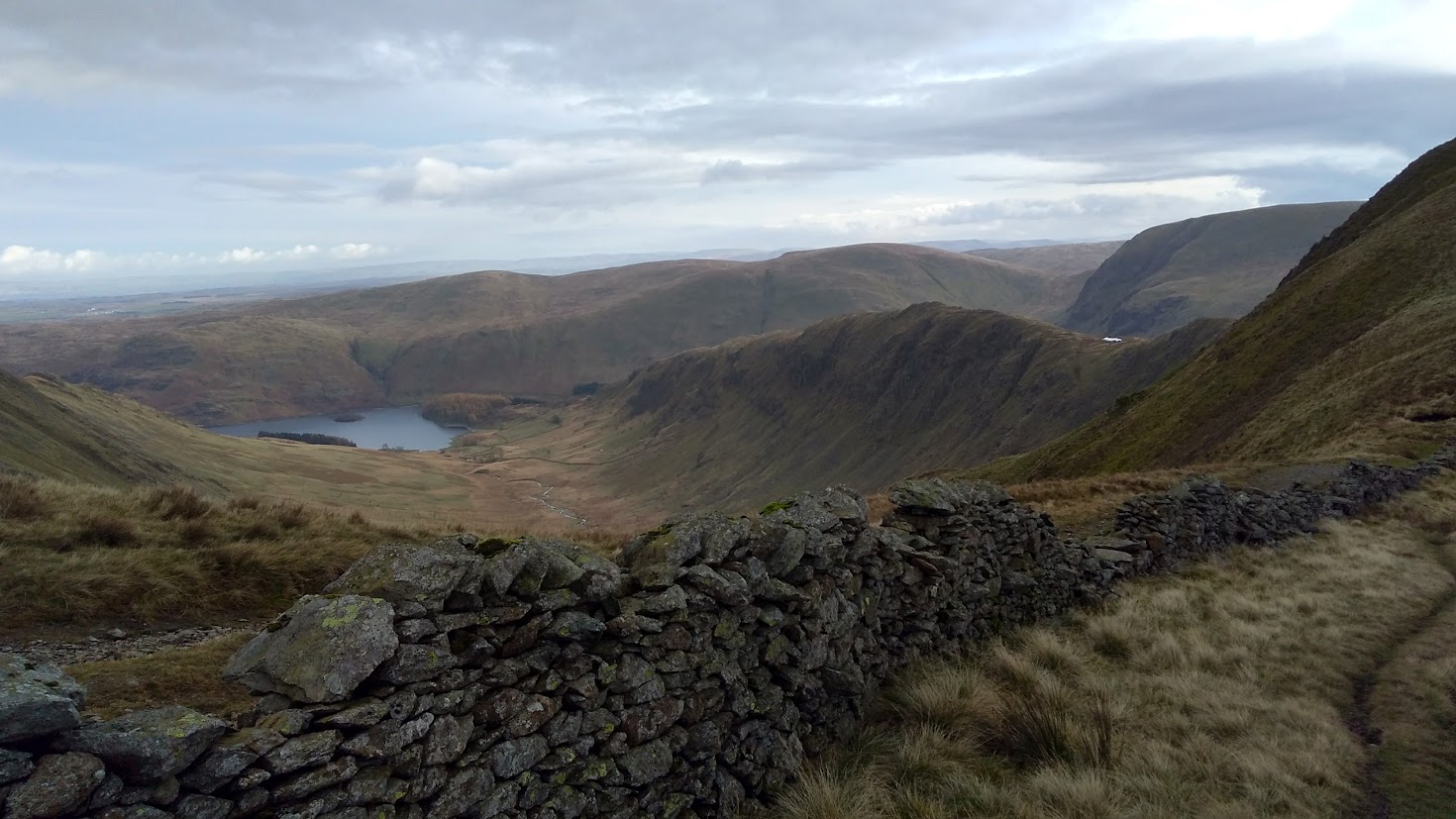 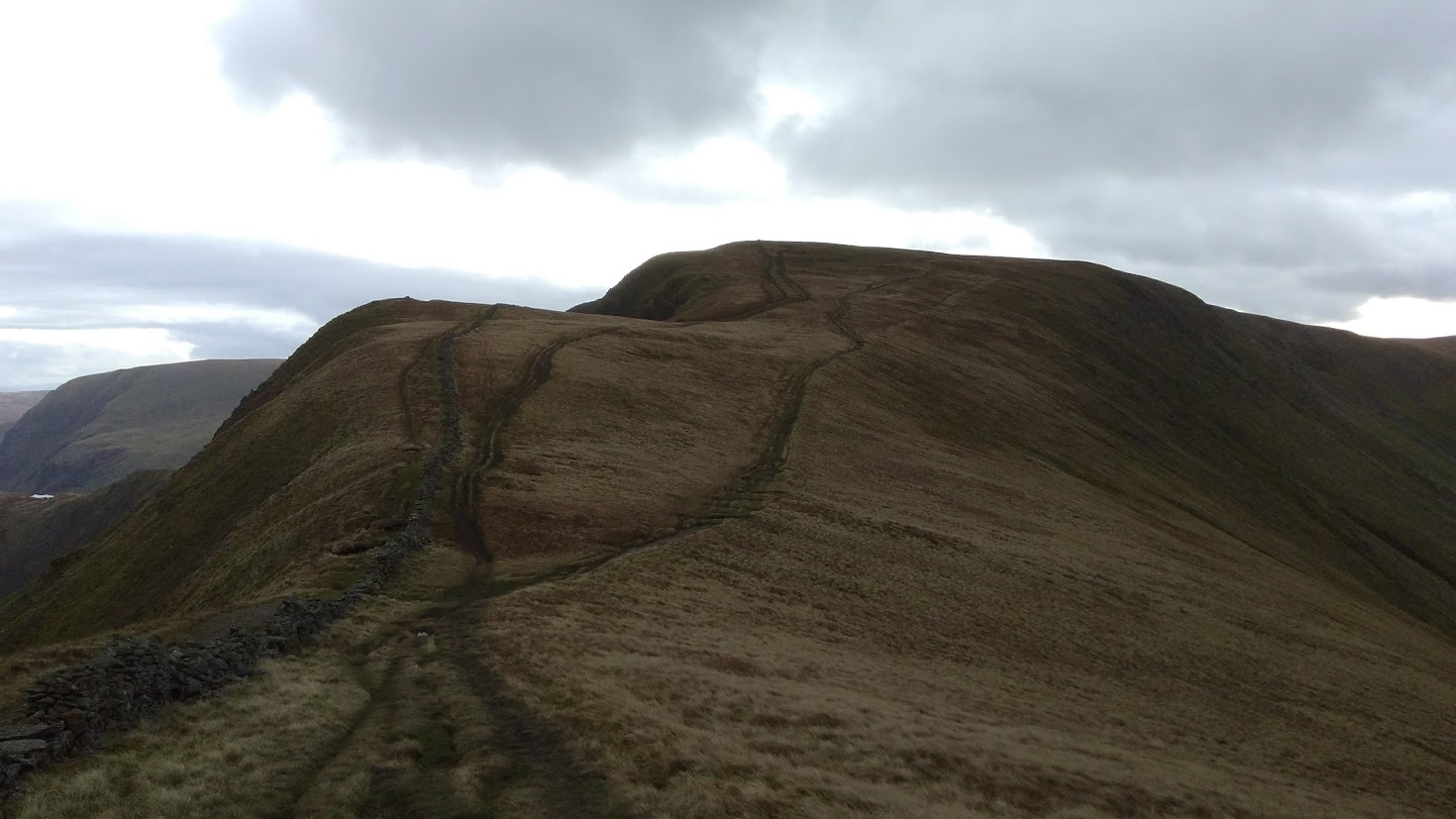 the roman road up high street 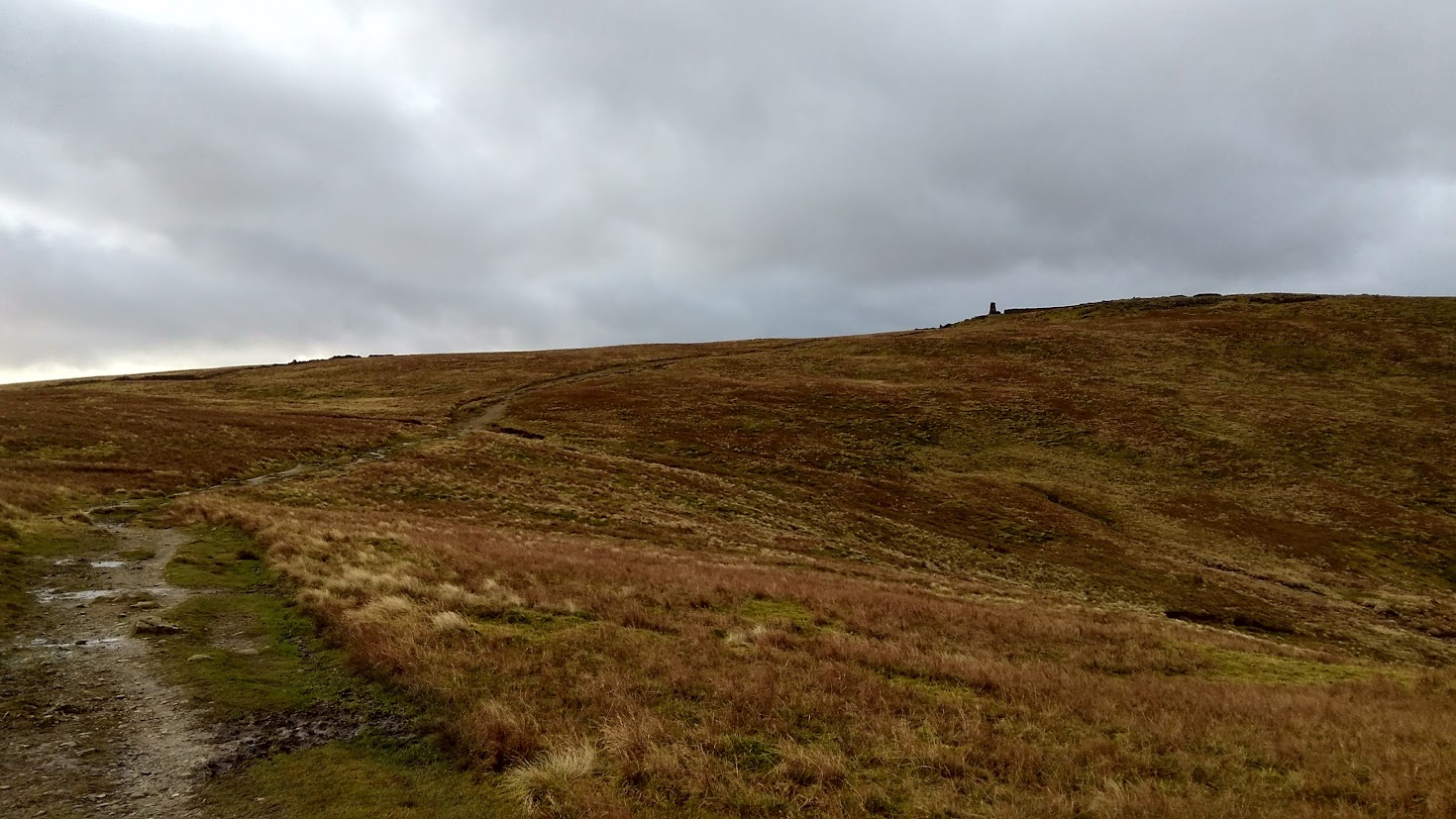 Thornthwaite crag is just another top of High street but a cracking viewpoint looking southwards. 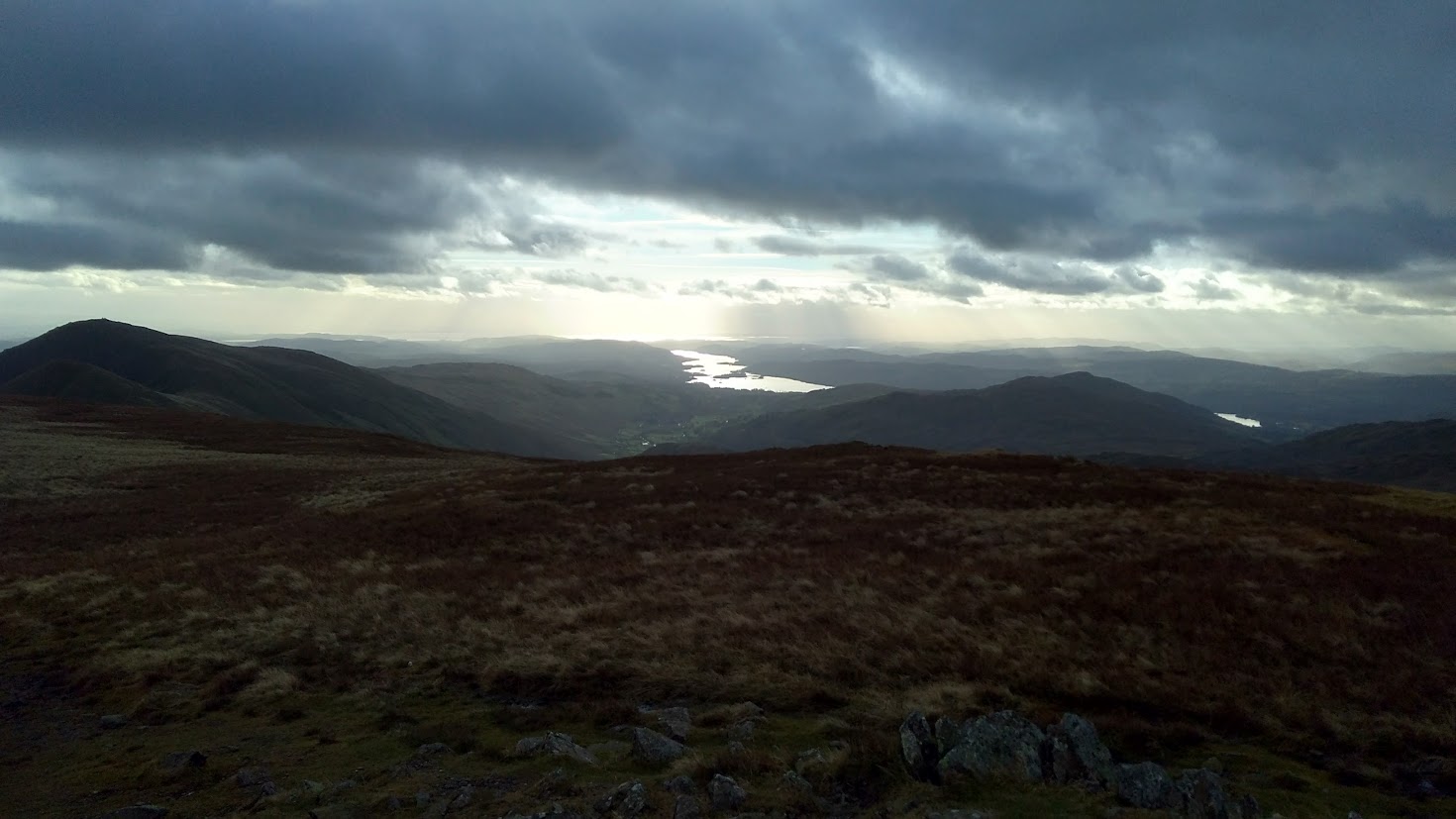 The view of Windermere from Thornthwaite crag

I joined several people having a break at the tower cairn and enjoyed the view. then off downhill, very very steeply, not an enjoyable descent to Threshthwaite Hause then down into the valley heading to Hartsop, again taken carefully as my legs were tired and with the full rucsac, Not hill fit. Glad to be down and on flat paths, and ease the aching legs. 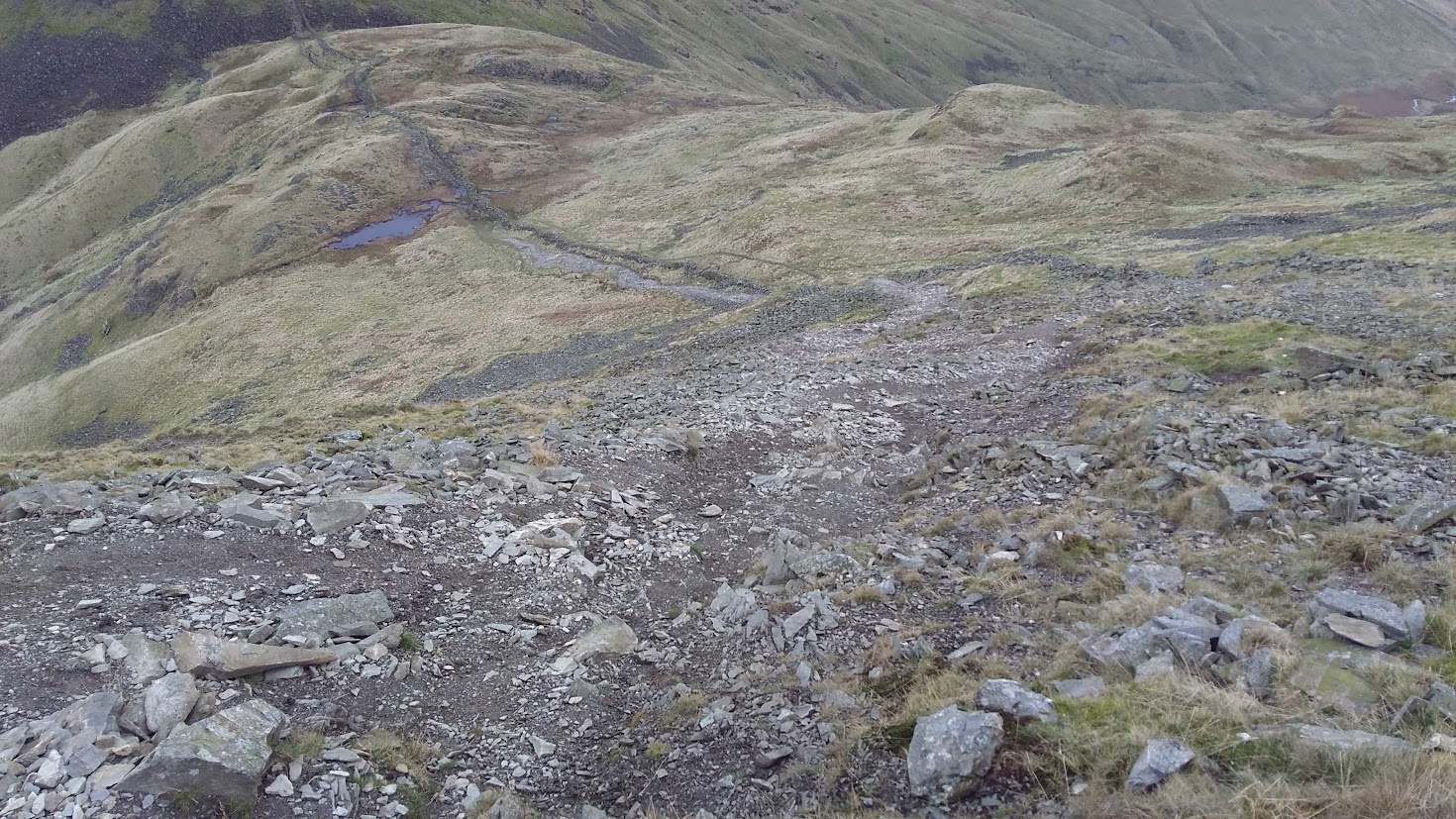 the steep descent off Thornthwaite crag down a scree slope 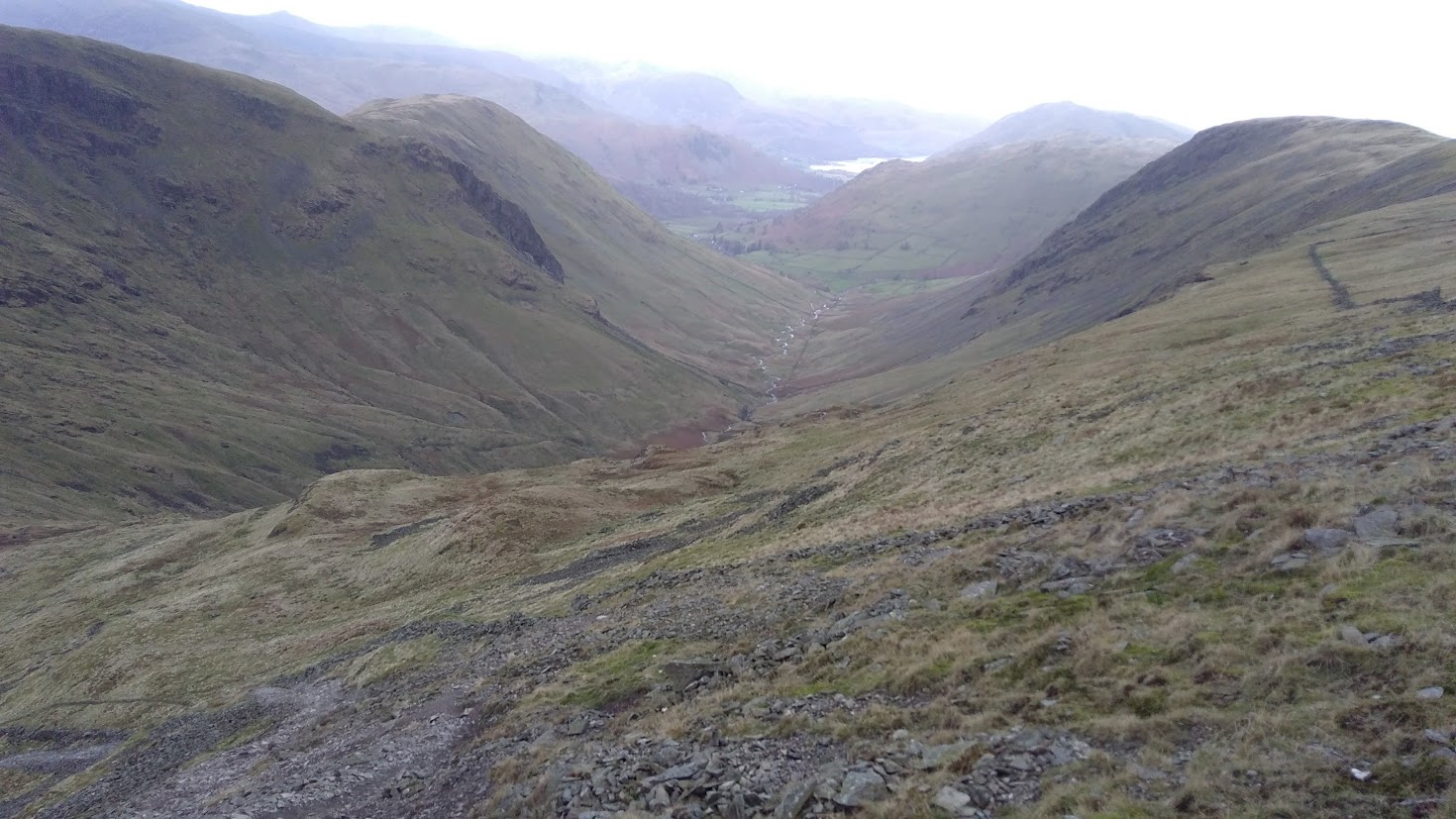 The Pature Beck looking towards Hartsop and Ullswater beyond where my car is, still a way to go 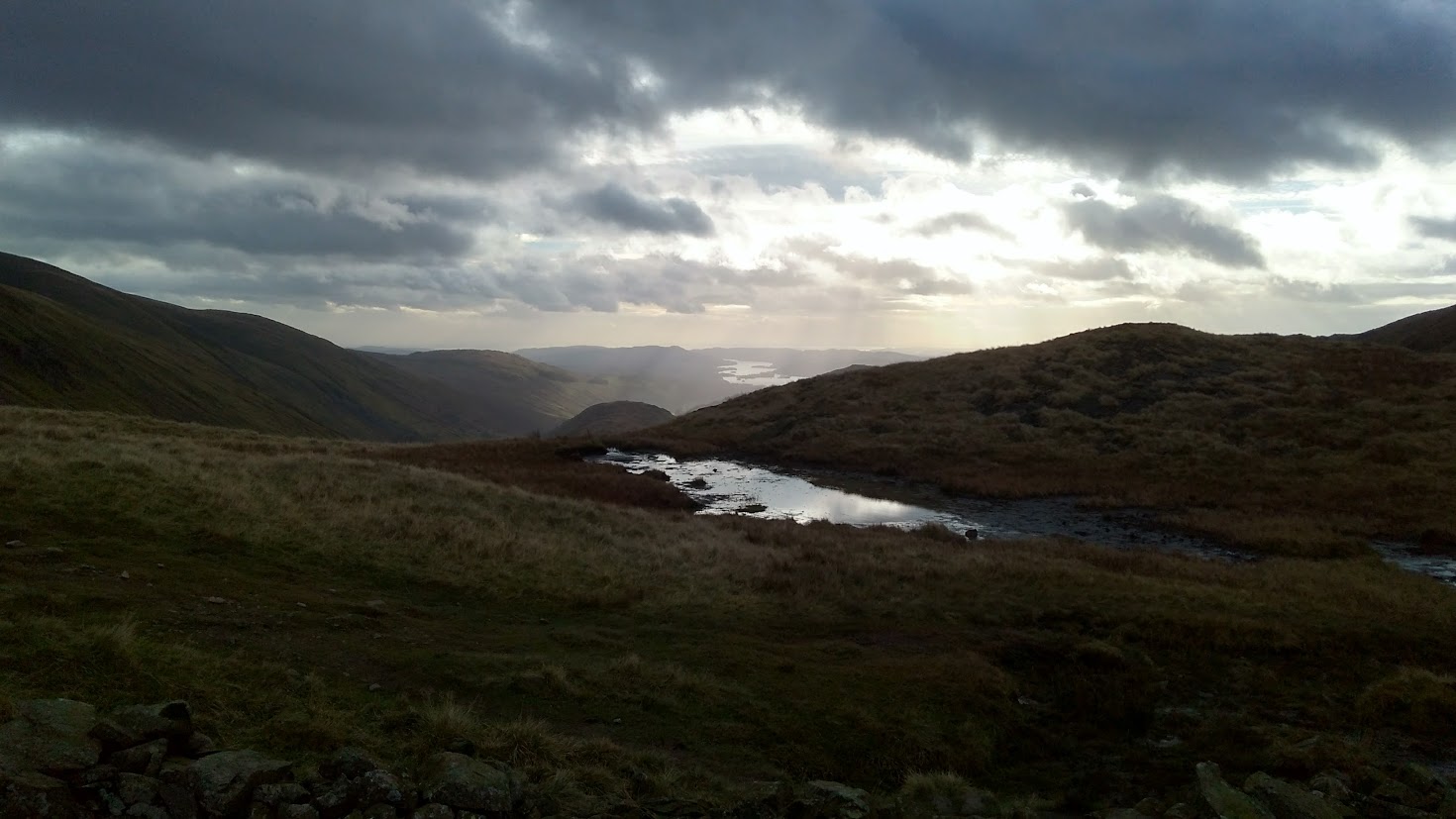 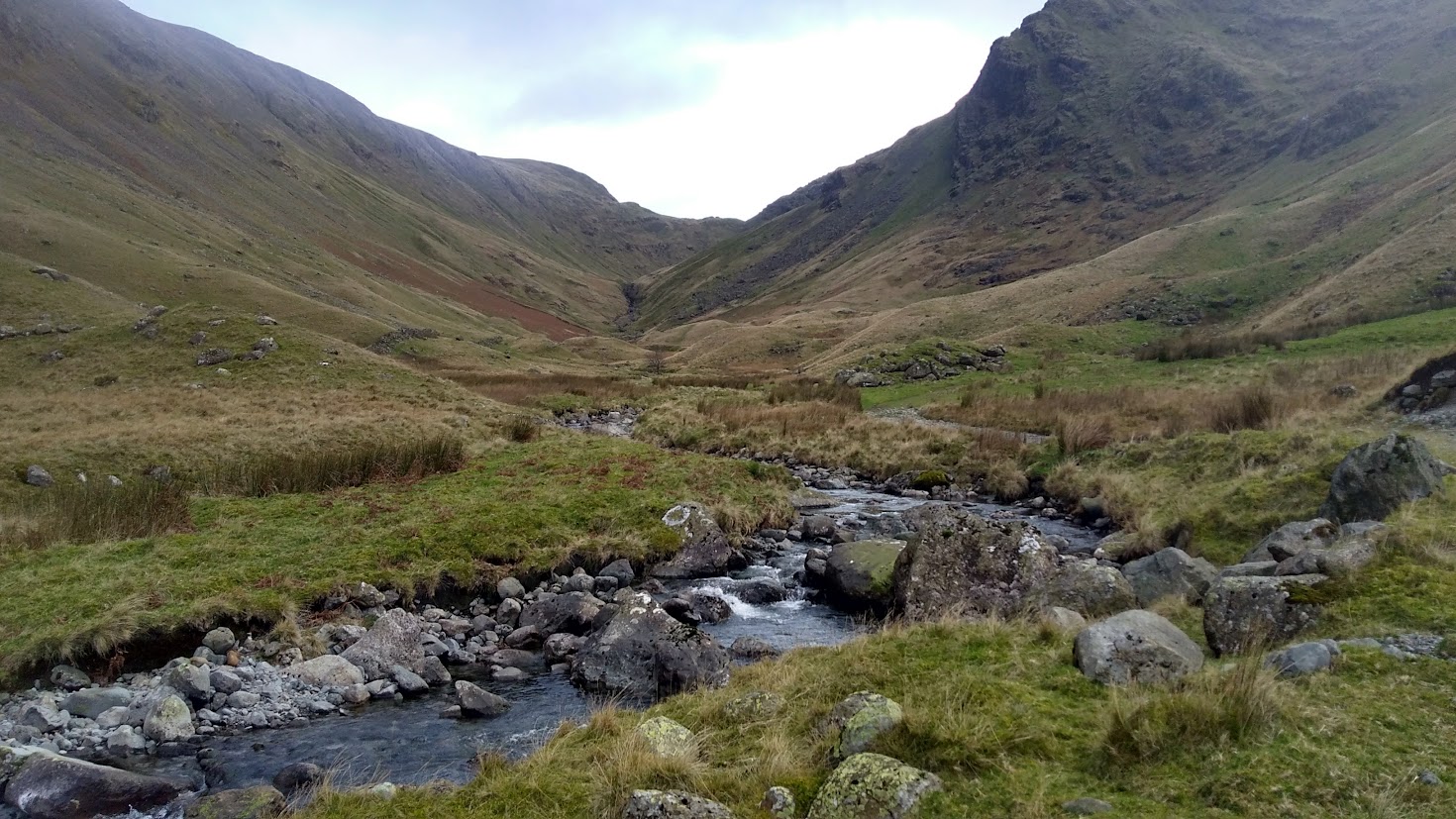 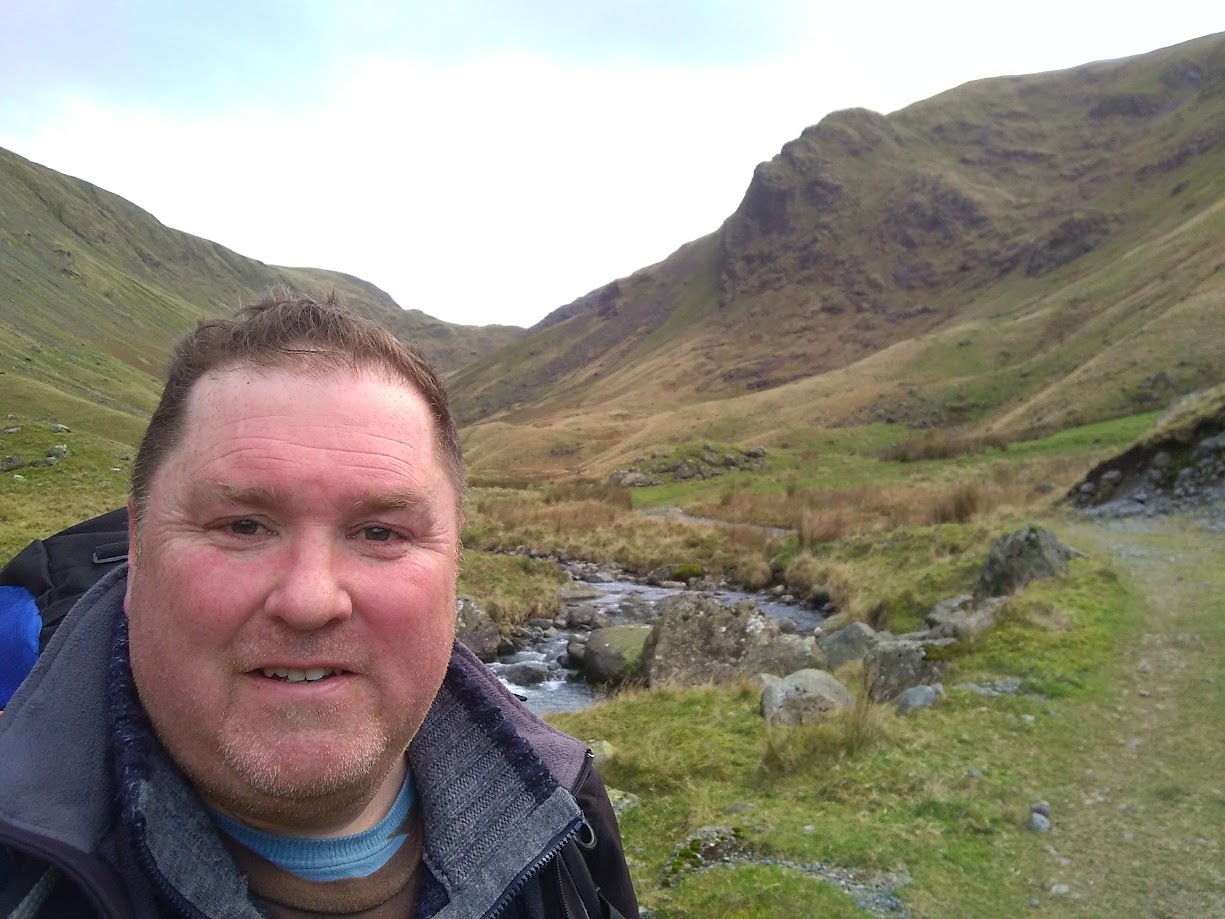 Made it down and having a break before the walk back through Hartsop village and walk back along the main road to Patterdale.

Good circuit and enjoyable night out under canvas. and 4 new Wainwrights for me.

I reckon I'll try this (there might be a club for wild camping at every single angle tarn in the LD....)!

Some great pics - I especially like the one of Windemere from Threshthwaite Mouth.

Nice one, a great place to be night or day

Great walk, report and pics after a peaceful night on the fell.

I reckon I'll try this (there might be a club for wild camping at every single angle tarn in the LD....)!

Some great pics - I especially like the one of Windemere from Threshthwaite Mouth.

There is at least 33 tarns according to Google

, probably more.......interesting proposal.... thinking about Red tarn between Pike o blisco and Crinkle crags this friday, if the snow lets us get into Little Langdale.

trailmasher wrote:Nice one, a great place to be night or day

Great walk, report and pics after a peaceful night on the fell.

Thanks Trailmasher, I saw more deer on Kidsty pike,they were running over the rise to avoid the hound trailing.
Ive seen Deer before up around Angle tarn, once you get onto the different tops of Angle tarn pikes away from the main path you can normally spot a few, plus saw some more high up on grey crag as I walked down alongside Pasture Beck back to Hartsop.