g18.gpx Open full screen  NB: Walkhighlands is not responsible for the accuracy of gpx files in users posts
A grand drive along the south shore of Loch Earn and I parked up near Ardvorlich house as detailed in the Walkhighlands route guide. 2 other cars there, I said hello to the couple just setting out and the other walker I would see later, but not meet. The forecast was for fine weather all day and there were already blue skies and sun, not something I’ve seen much of in Scotland. This would be the best day of the week so the forecast said and I wanted to make the most of it. On the wall there were a pair of boots, some poor sod had made a drastic error – or were they left there by design due to blisters perhaps?

Ben Vorlich could be seen from the parking spot, completely clothed in snow – just what we want! This is a hill you can see all the way up the approach route, as I walked up the track I was soon into snow on this north-facing slope. The Stuc can’t be seen from here though, that joy has to wait until you’re atop the Ben. 2km in and the track turns to a path, but after a while the path wasn’t obvious given the amount of snow. Make your own route then, I just aimed for the trig point that was nicely visible, no compass work required today. The ridge top had been wind blasted but there were still decent snow patches about along with a fair amount of ice. At the first large patch of hard snow I put the crampons on; I had been looking forward to this! It was a joy, decent hard packed snow and easy going over the ice. Here I met the couple descending; he was doing a great job with boots only whilst his wife had the crampons. There is a nice steep section just before the top, very enjoyable in the winter conditions. 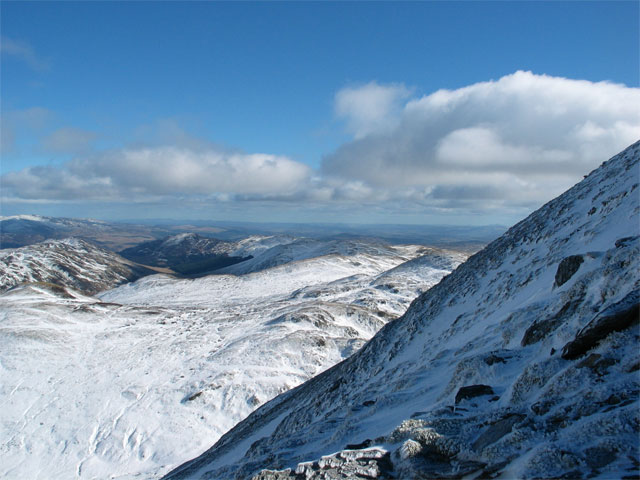 Over the brow to the summit and trig point and a look at the superb panorama, but first your eyes are drawn to Stuc a’ Chroin of course. The buttress looked magnificent and challenging and the route to it looked interesting too. Snow covered mountains, blue sky and complementing cloud stretched out forever in a scene that made every effort in this hill-climbing game worthwhile. first view of the stuc There was a bit of an annoying wind so I headed along the ridge and found shelter at the eastern end behind some boulders, fuel time. Mulligatawny soup to go with the cheese and ham sandwiches today, and Cornish pasty, yum. I spent nearly an hour here overall, eating, taking photos, working out the route ahead and just enjoying where I was. Planning ahead, the return by way of contouring around Stuc a’ Chroin and Ben Vorlich looked dodgy because of lee slope snow and large cornices so I needed a plan B to avoid reversing my route down the buttress, the only other reasonable option seemed to be a descent to Glen Ample and a road walk. Then I saw a walker on Stuc a’ Chroin, heading down from the high point, I thought this must have been the owner of the car parked at Ardvorlich. I saw him head down the ridge toward Glen Ample. Time was getting on what with my long break but I decided to continue, I could always do the road walk by torchlight if needed. I headed down the southwest ridge toward the bealach and picked up a line of fresh footprints, so it was the car owner as I’d thought. I followed the footsteps to reduce the time spent route finding through the boulders, however the walker wasn’t wearing crampons so I picked out what snow patches I could, it wasn’t worth taking the crampons off since I’d soon need them. 40 minutes later I was at the base of the buttress looking at the route in more detail. the stuc from the ridge down to the bealach

It being breezy again, I spent a few minutes in the shelter of a boulder to make final preparations and have a drink, then set out. I took unashamed advantage of my walker friend again; his route looked good and logical over the initial snow slopes. The snow was broken by protruding rocks, into sections that gave a good safety margin. It was huge fun, and very fast, kicking steps up the snow between the rock islands. Before I knew it I was at the base of the steeper, rockier slope. I mostly followed my mystery walker’s route, again finding hard snow and ice where he’d avoided it; he had no crampons on but did have ice axes, he obviously climbed well. The climb was hitting the buttress head on and was brilliant. Rock, ledges, crampon work and whacking the pick into good frozen turf. There was just the one difficult patch where there were a few metres of very steep snow that was softer than I’d have liked, this required extra care. Then, suddenly, the slope was easing and I was at the top, 40 minutes it had taken from the base but it felt like just 10 because I had been so absorbed. I got to the first cairn and the memorial and took a few photos, the weather was getting even better with the cloud slowly melting away. 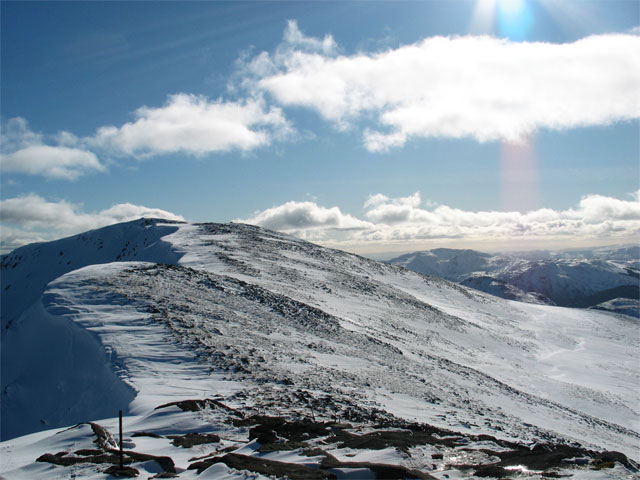 cornice on the stuc ridge

I attached the sack to a fence post whilst I zoomed along the corniced ridge to the highest point, I reached the cairn to find another one a few yards away, don’t know which the true summit is. This could catch you out in mist though; you could end up thinking you’d got to the summit but in fact you hadn’t! I bombed back to the sack and had the last of my drink; I was still thirsty though what with all this sun and wind. ridge from the cairn

I headed on down the east ridge, stopping to look more closely at a possible descent to the north but it was just too dangerous. So on down the ridge as fast as I could, easy going for the most part and all the way I could see the forestry track that I was aiming for. A steeper section ends the descent; there is a deer fence with a convenient stile. Round the plantation, through some birch trees and onto the track. Here it was very warm and spring-like in the sheltered valley, a contrast to the peaks above. Really parched now, a little way along I filled my water bottle from a stream and drank until my back teeth were floating, it was delicious. heading to the forestry track on the track looking back up the ridge

The walk along Glen Ample was a fine way to end the outing but the road walk I’d rather forget, except for the great view to Lochearnhead in the dusk with woodsmoke hanging in the now-still air, the distant lights of cars driving down Glen Ogle, owls hooting and the moon that rose in front of me in the cloudless sky to light my way just as the sun’s light faded completely. 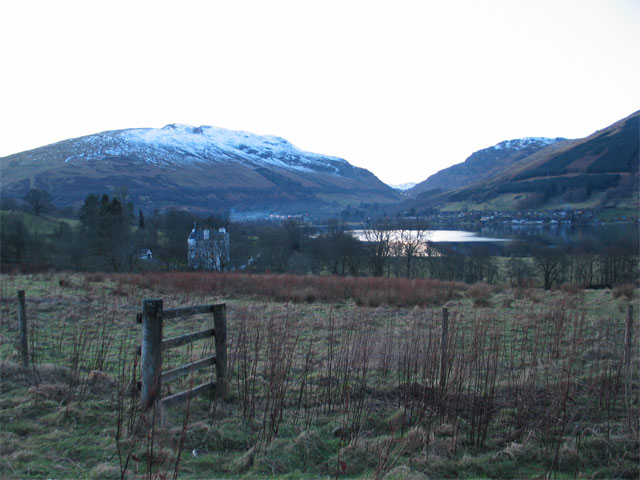 The good thing about this site is you get to see what it is like in a good day! I have done these hills twice and was lucky if I could see a few metres in front

The 2 shots on the approach to the Vorlich summit brought back good memeories. I did this in very similar conditions in Dec 2006. First time I'd been on the slippy stuff. Saw sod all from SAC when I did that one - didn't even know it had a ridge

Good report! Some bits reminded me of my walk there. Didn't really like being able to see the top from the start of the walk. For the first few hours it didn't seem to get any closer! After some navigational problems after Ben Vorlich we decided to take a path we'd heard about to avoid the 'rock wall' up to Stuc a'Chroin. But in the mist we ended up going up it anyway! Very very steep scramble. But I remember near the top my friend telling me to turn round, and there was a clearing back over to Ben Vorlich, suddenly drenched in sun. Fantastic view. We found the easier route on the descent, which was significantly easier and faster!

Yes the approach did seem to take a while but the snow scene made up for it!

SAC is a serious scramble, so must have been exhilarating under snow and ice. Great photos