Fab day on the Lowther Donalds.

Fab day on the Lowther Donalds.

our_route.gpx Open full screen  NB: Walkhighlands is not responsible for the accuracy of gpx files in users posts
The latest instalment on the winter assault on The Donalds. Sunday 10/12 proved to be a fabulous winters days in the Scottish hills. Judging from the amount of photos on FB a lot of other people took the opportunity to get out as well. Getting the stage now in The Donalds, where apart from the Peebles area and a few outliers around Moffatt area, that I need longer days for the extra drive and longer walking. A check of walk reports on WH showed me that with an early start the Donalds around the Elvanfooot area would be a starter.
Come Sunday morning I was off out of the house at 7am. Surprisingly even though the car clock read -2 there wasn't any frost on the car so it was straight off and onto the A69 and M74. The car outside temp stayed the same up to the Lockerbie area where the partial cloud cover ended and as I drove up towards Beattock the outside temp plummeted to -10. I drove slowly into Elvanfoot as everything was coated in ice and I abandoned plans to drive up to Wanlockhead to do these hills as I reckoned the approach to the hills would have been shorter and instead drove along the A702 to reach the parking area short of Overfingland. Out of the car the air was dead still and it didn't feel like -10. At home last week the wind had been blasting and had felt far colder than this. Suited and booted it was over the fields onto the SUW over Comb Head and Cold Moss. I tried to cut the distance ascending on the SUW up onto Lowther hill and ended up walking through rough ground for longer than I wanted to in order to reach the area just above the col that takes you to East Mount Lowther. Its a surprising distance into East Mount Lowther, 2hrs 20 mins I was on getting to the top and its odd trig point! Anybody know why it has a casing? its the first I've seen like that. 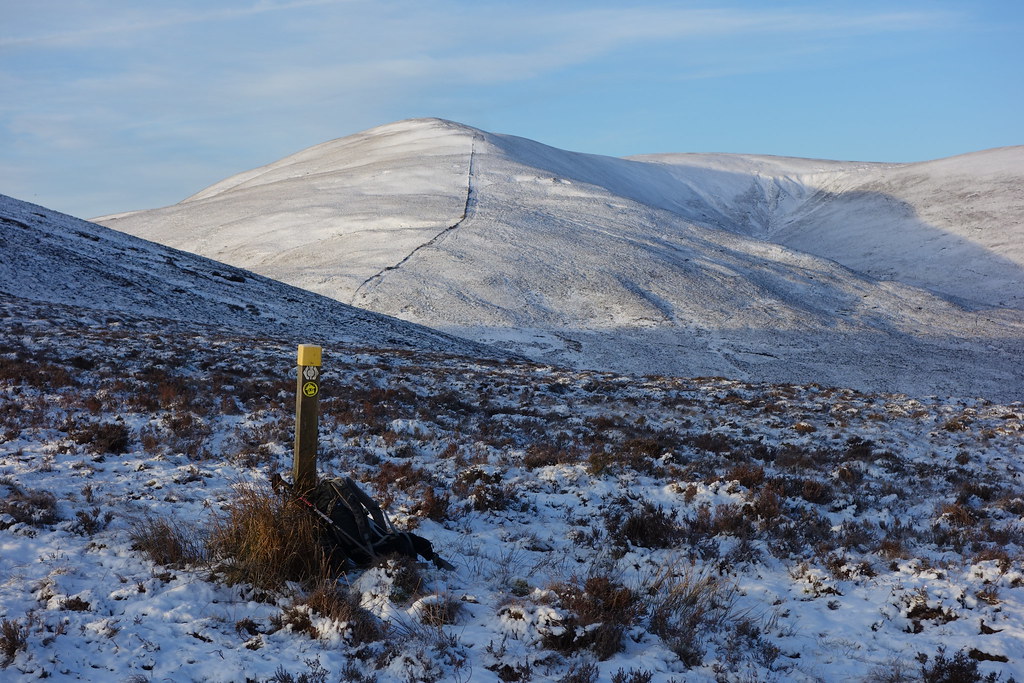 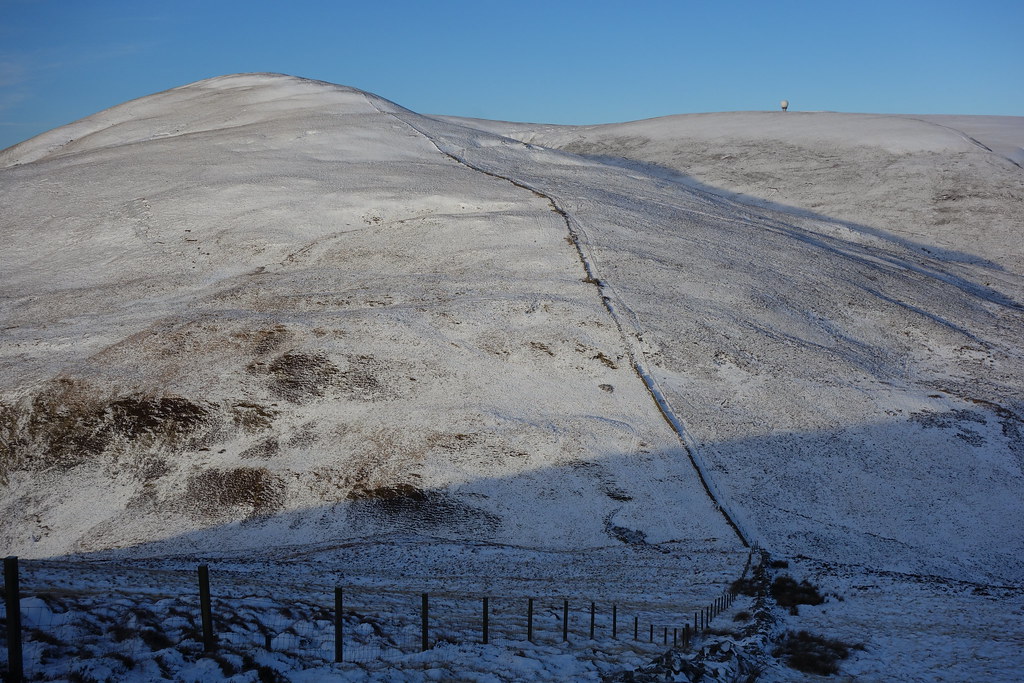 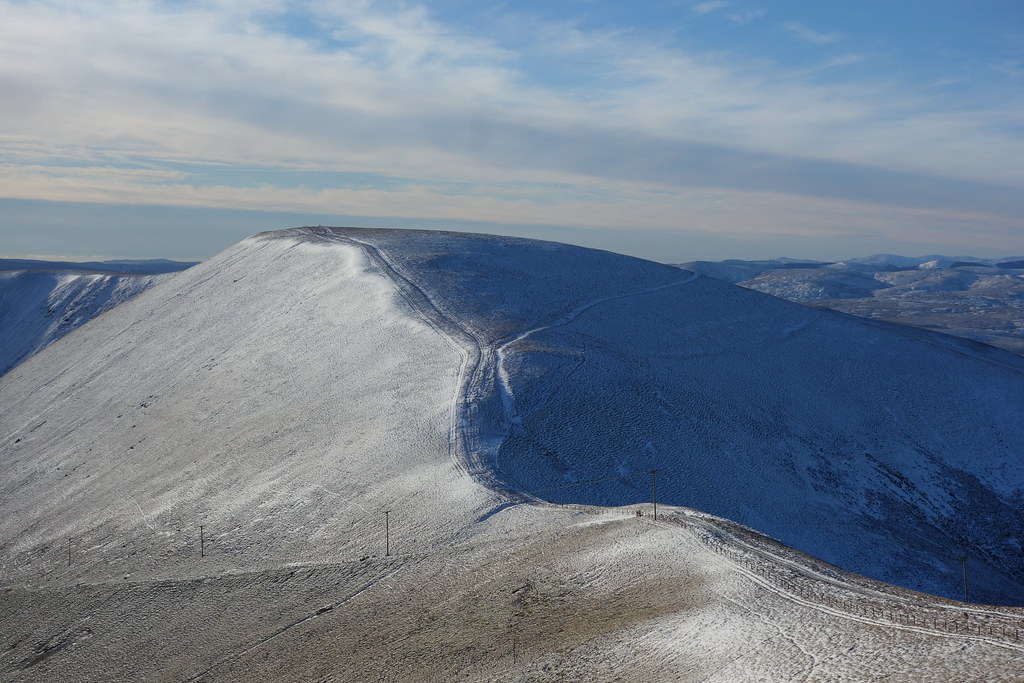 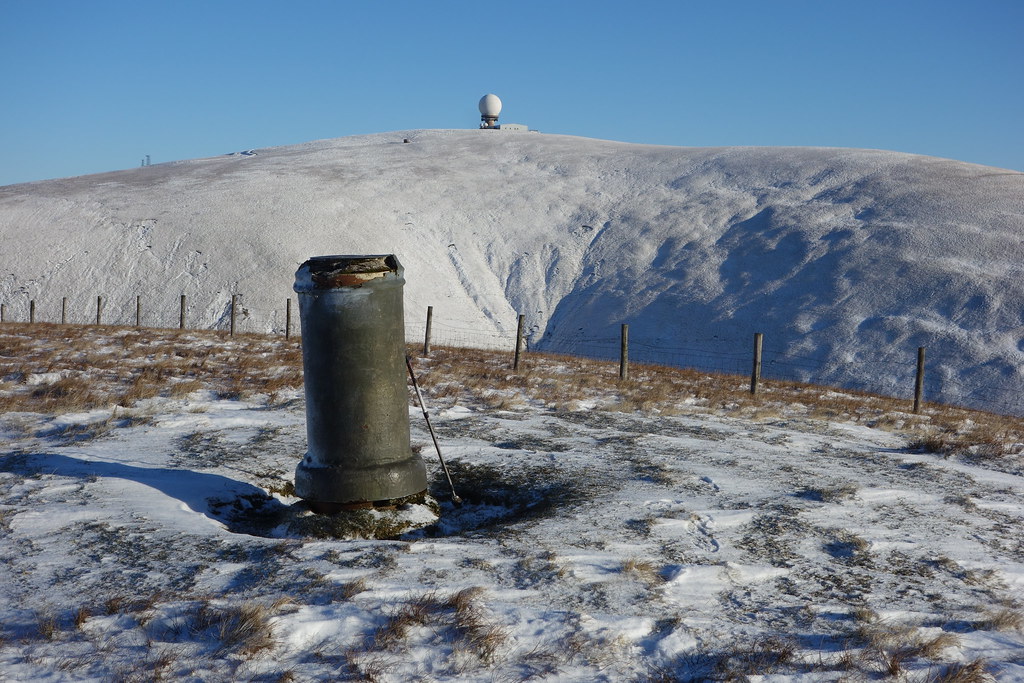 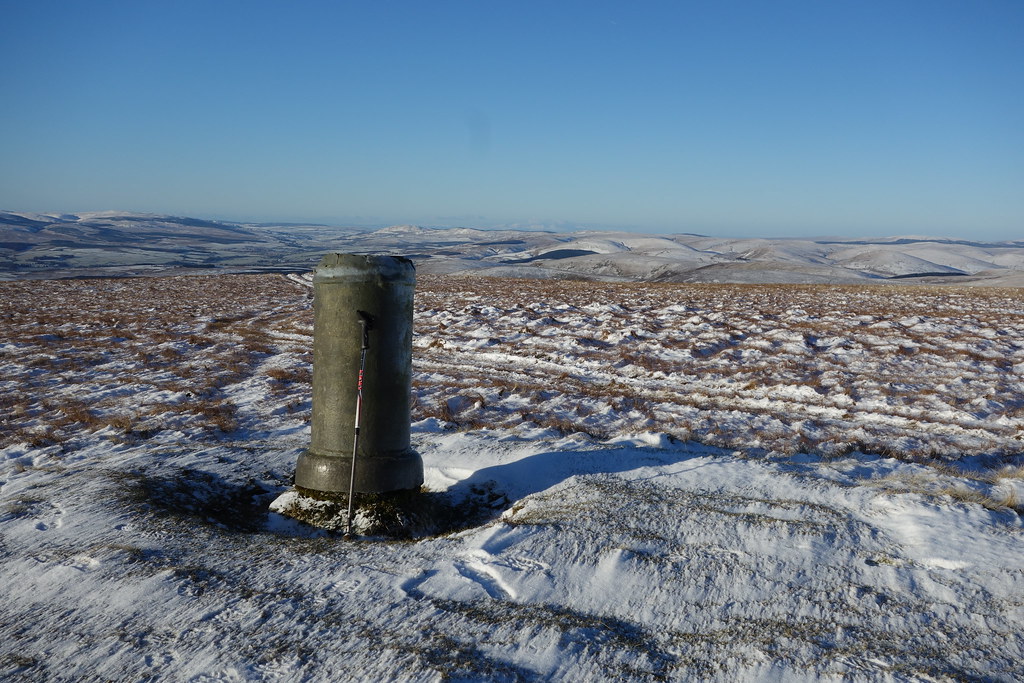 DSC01852
From East Mount Lowther I returned via the col and then ascended to the road that takes you to the top of Mount Lowther. It now being about midday I went round to the front of the radar station and sat in the shelter of the wind in the sun. The view was all the way down to the Solway and over to Galloway but a bit hazy to see the Northern Lakes. Time to join the road section to Green Lowther. The road had a thin layer of snow on it but made for fast progress. The wind had picked up on top and it was on with a balaclava, with a hat on top, and my favourite harsh winter jacket, the Montane Flux. 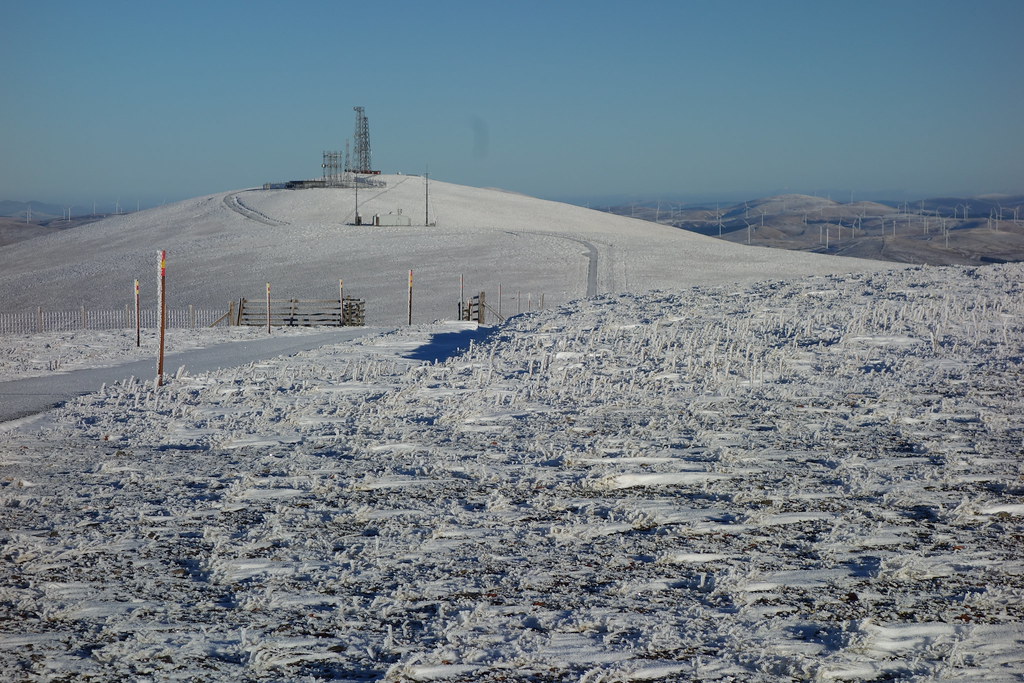 DSC01854
From the end of the road section you follow the fence line. Its the great thing I've found about the Donalds so far, navigation like the Cheviots is usually by fence line. Made an error here, not in navigation but in looking ahead thought what I could see was the end of the ridge at Lousie Wood Law but was in fact Dun Law. You only see LL Law until you get to Dun Law. Quickly made up the ground thinking it was LL Law and thinking I would get this over quickly and get back to Moffat for a coffee. Got to Dun Law and by seeing I was more or less level with the reservoir at Peden saw that LL law was in fact some way off yet. 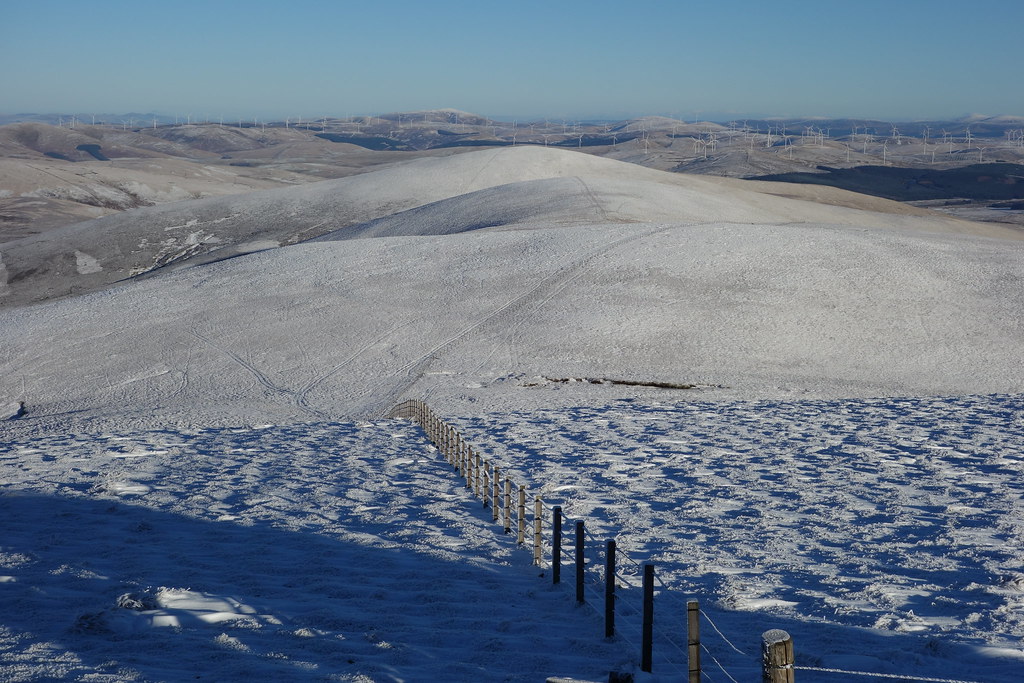 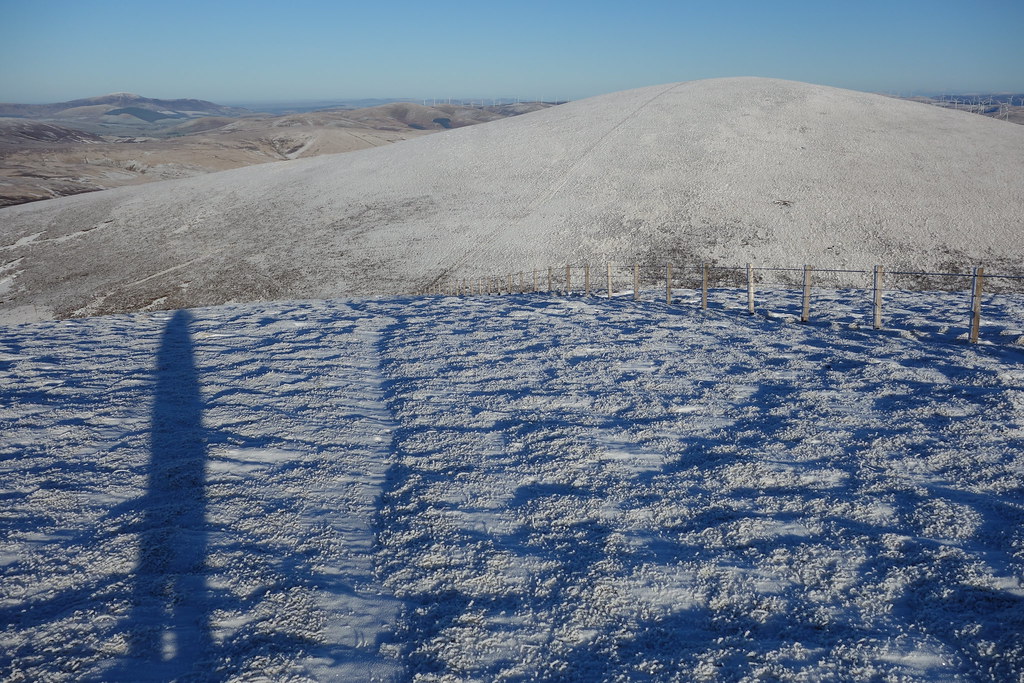 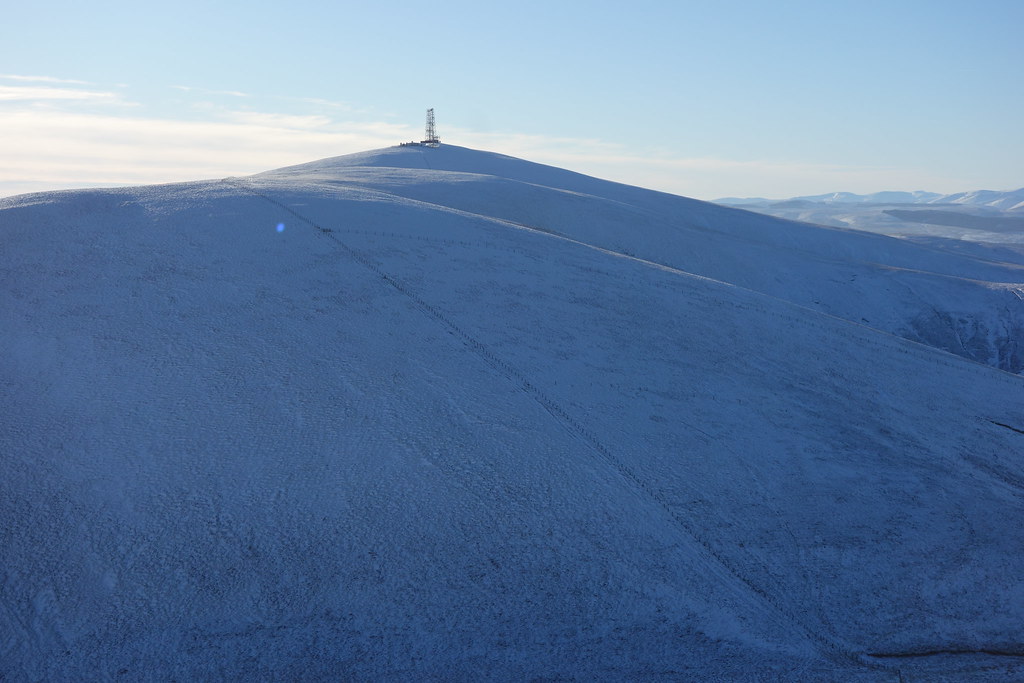 DSC01858
Having got to Dun Law the way forward was clear all the way to LL Law, about 1 1/4 mile away. As per normal with the Donalds there is a large descent and re-ascent between White Law and LL Law. I didn't do LL Law directly more heading off NE from the col and trying an easier line and cutting back to the top of LL Law which gave great views of Tinto. I sat there for a short while taking in the views and placing hills that I had done previously. From there it was a descent straight down to Coupland Gair. I had seen reports previously of descents to the Peden Burn and Peden via the Reservoir but it was 2.30pm on the top of LL Law and with a road return to the car so I opted for a direct descent to the Glenochar burn and onto to the road at Glenochar. 45 minutes road walking followed and it was about 4pm when I got back to the car. Passed the house on the way back which shows the French mastiff dog on duty. The "dog" was being in the field opposite when I passed, that is some animal, more the size of a small pony!
The car clock temp showed -7 at that time. A cold night must have followed. 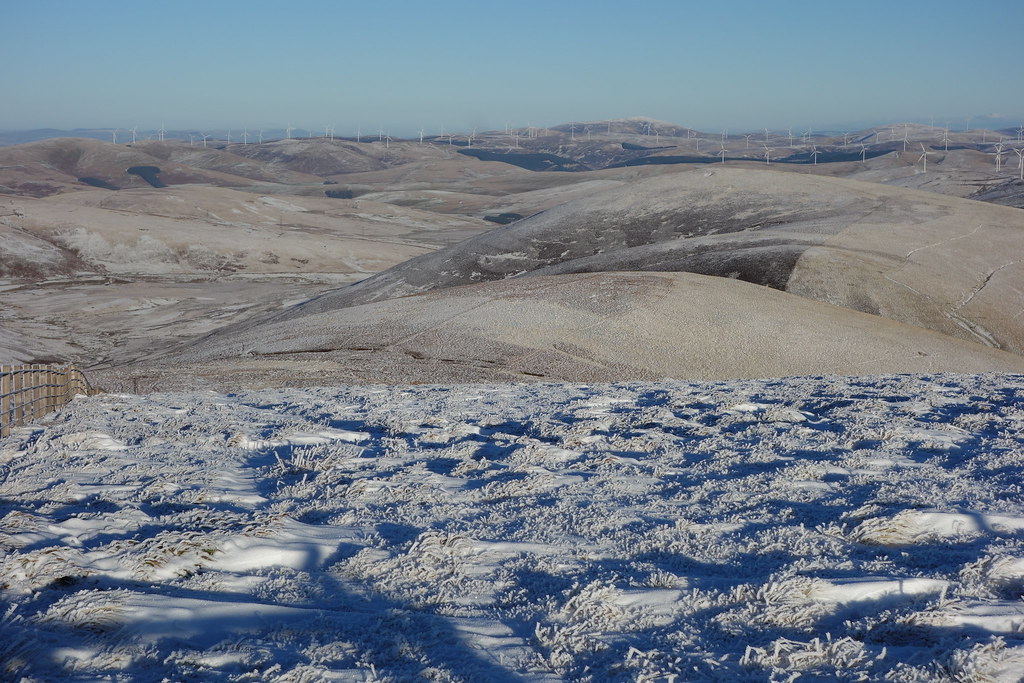 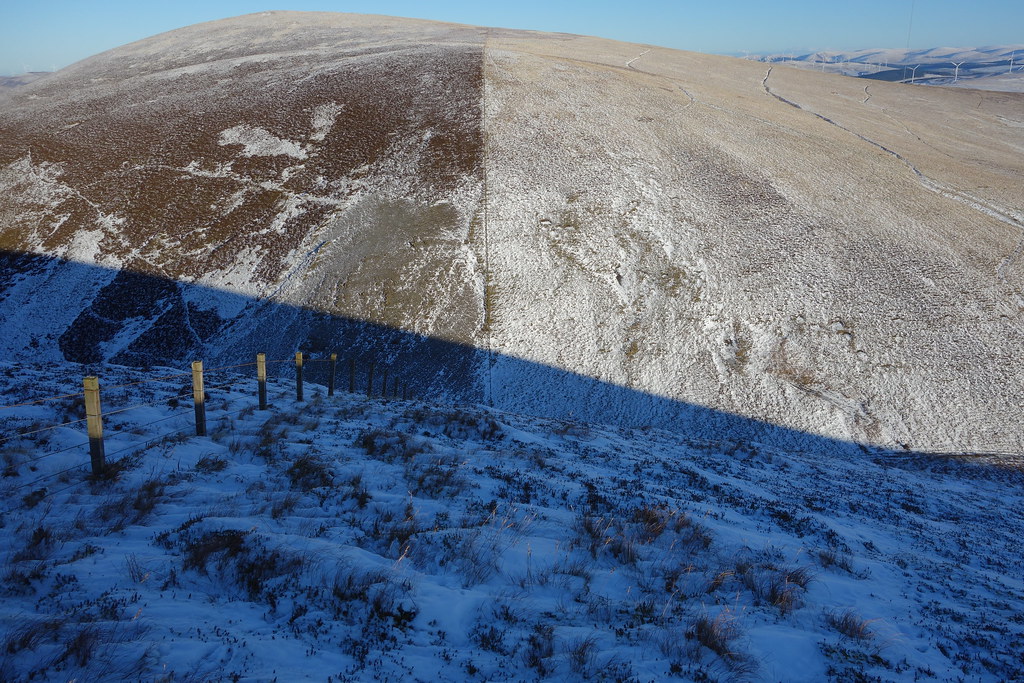 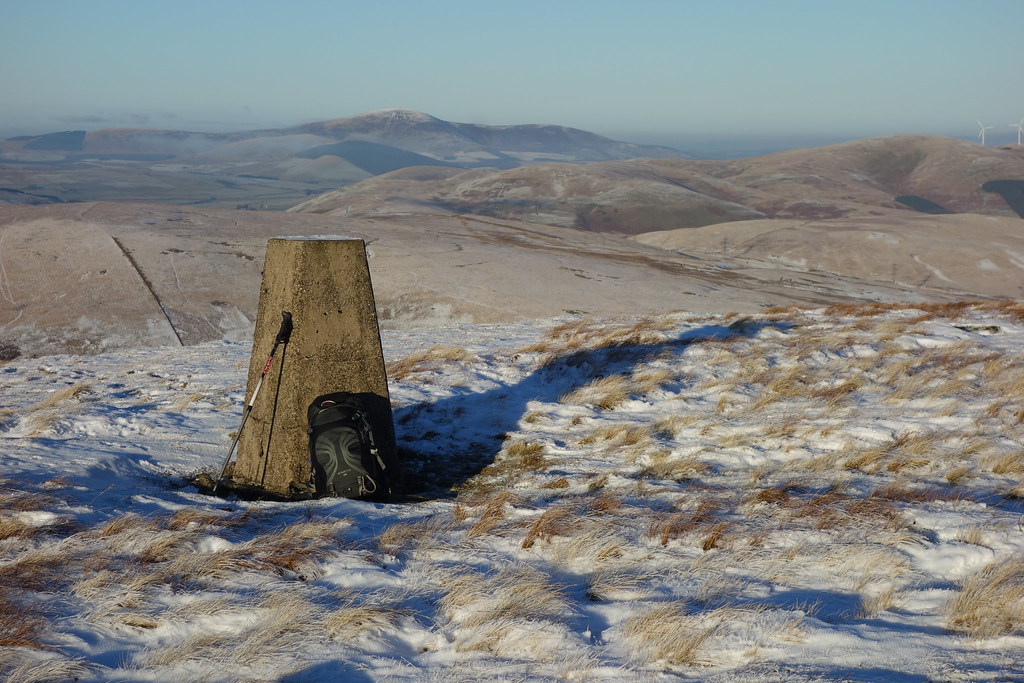