Second Taste of Winter - Give Me More!!

Second Taste of Winter - Give Me More!!


Tasting the white stuff the previous week on Beinn an Lochain ignited a thirst for more, Ben More that would be

And with such a good forecast predicted for Sunday its neighbour Stob Binnien would also be included. This pair are a great winter outing, one I've done many times.

An early rise meant I was parked up just after 8am, the temperature showing -9

Parking minutes after me were June and then Sandy. June is from Easterhouse (like me), Sandy from Dingwall but living in Glasow the last 3 months. June is a friend, so we set off together. Sandy 5 minutes afterwards.

Ben More is pretty relentless from the off, becoming very steep near its summit. Ascending its North Face meant the forecasted sunshine wouldn't be experienced until reaching the summit, a nice pay off for all the hard work. Walking past 30 sheep we started the ascent, an orange glow bouncing of the hills North with the views opening up nicely 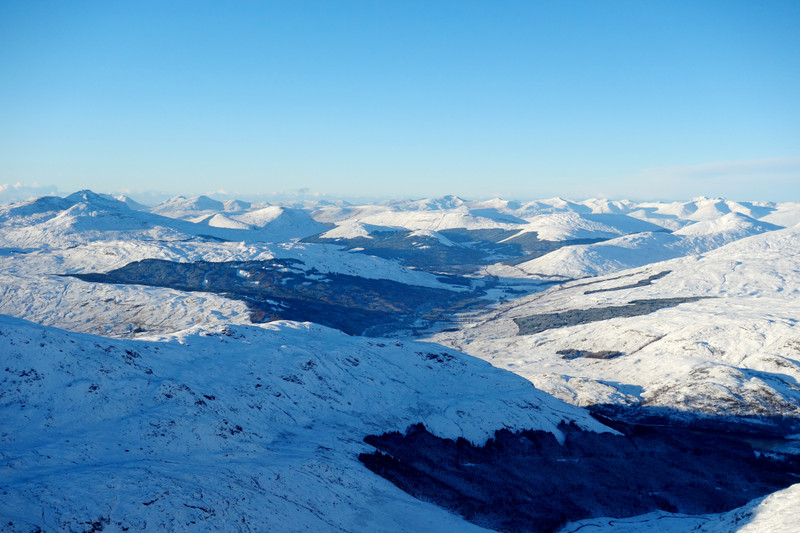 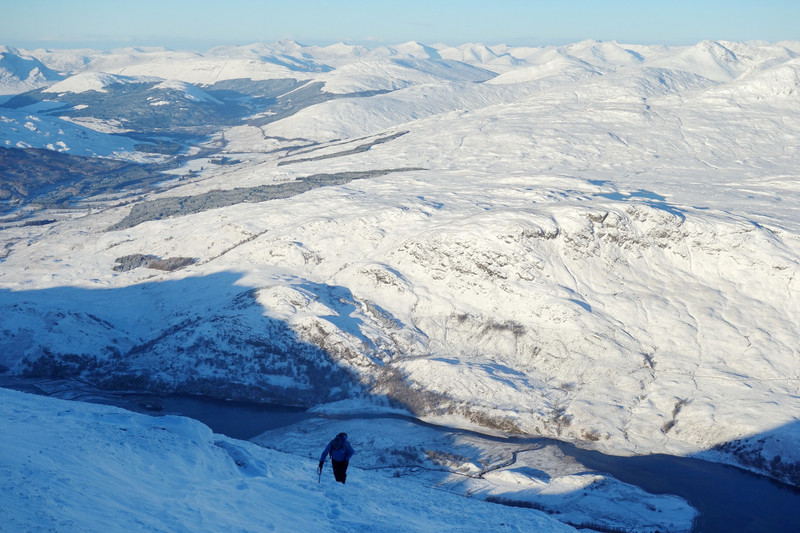 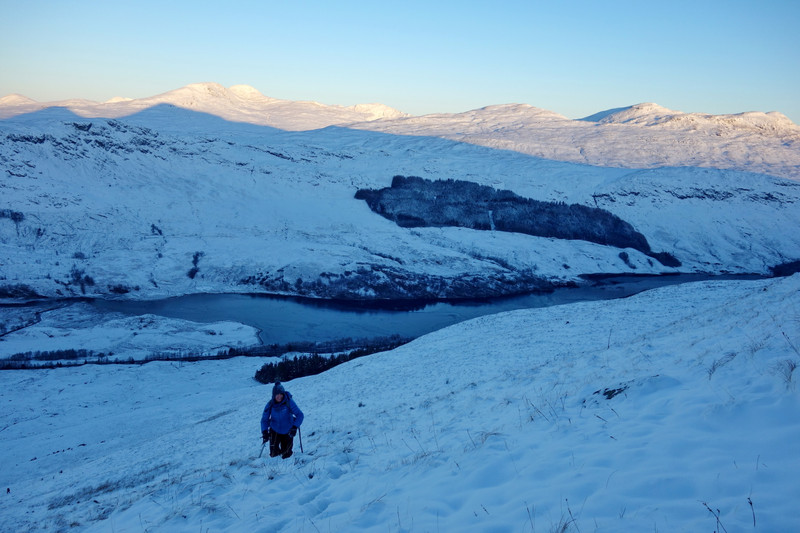 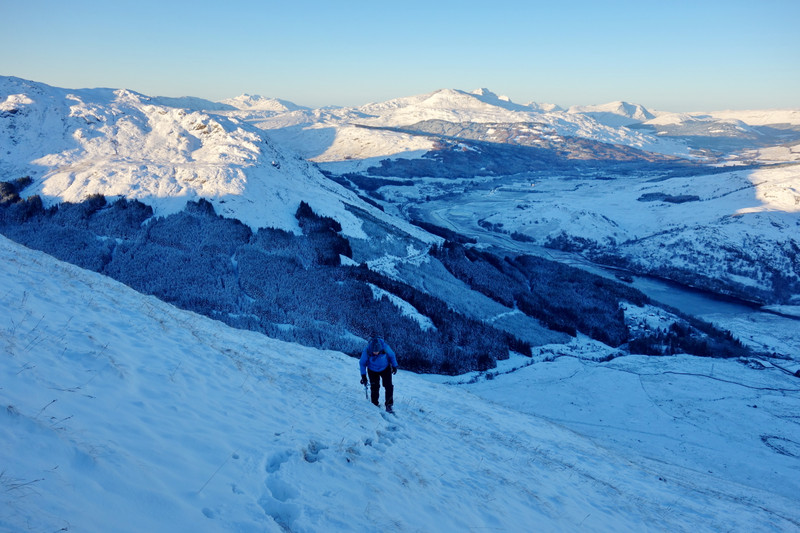 We took a steady pace, Sandy catching us with 300m to the summit. We had a quick chat and he moved ahead. Coming to the crags he took a left, I took a right when reaching them. The path was covered in snow which made some of the moves through the steep rocky face difficult, as was solidly planting the ice axe.

It took over 2 hours to reach the summit, rewarded with the sun firmly planted over Stob Binnien 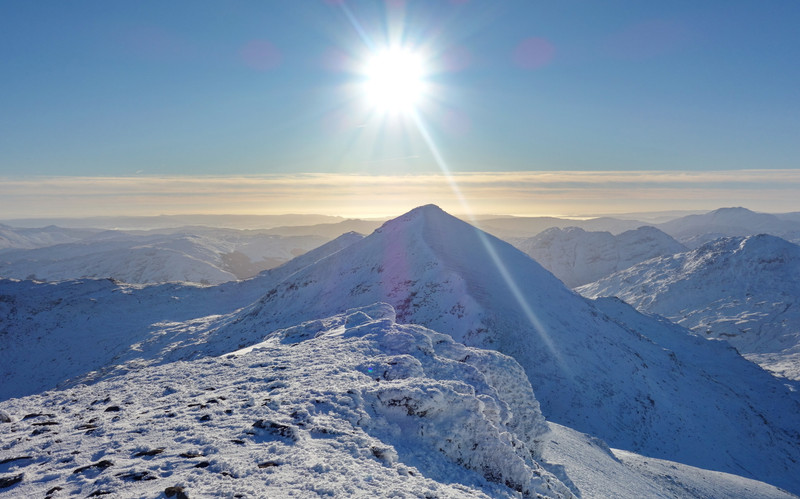 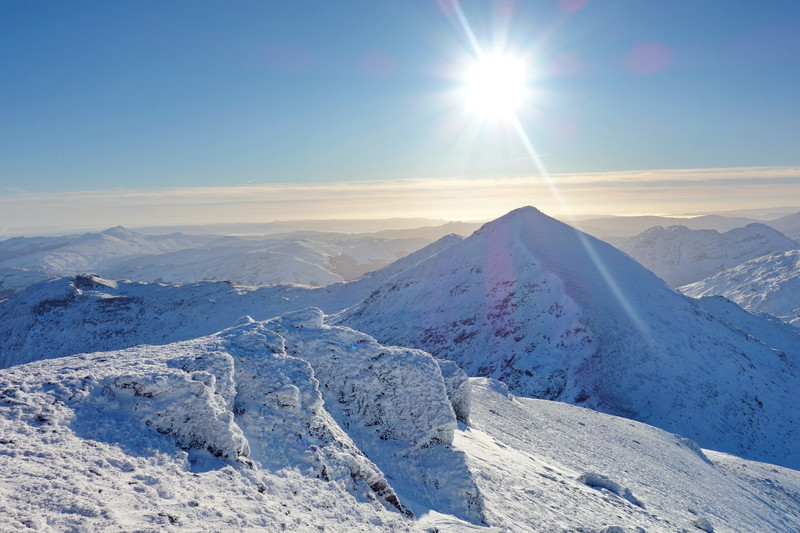 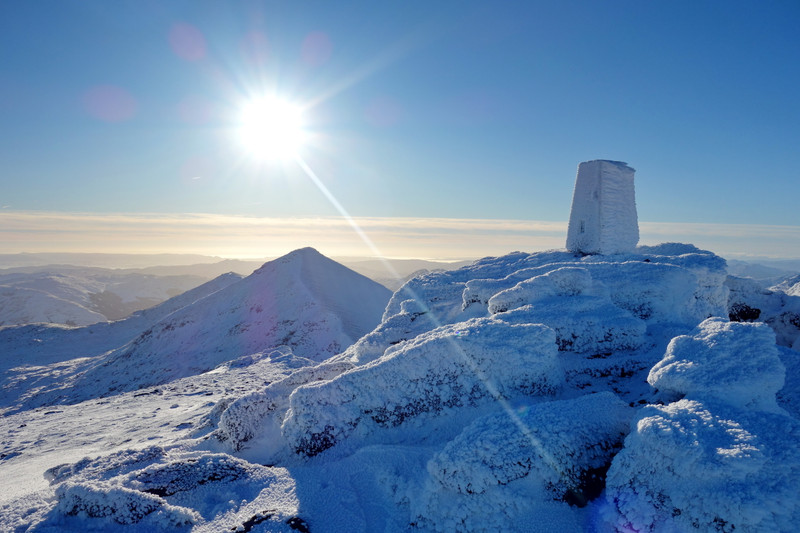 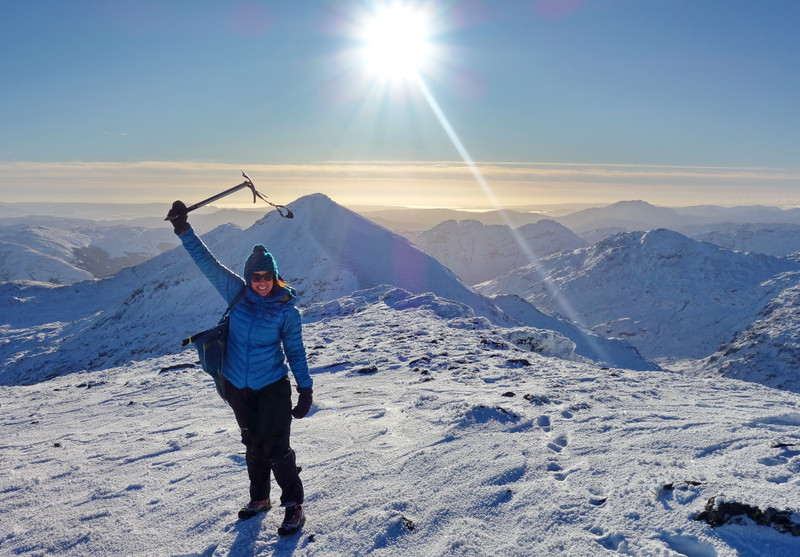 Sandy was having lunch in a nice sheltered spot, so we joined him. Good chat was had, especially his story of hitching a lift in Yosemite with Alex Honnold

. Sandy had initially planned only doing Ben More however seing we were doing SB he joined us

So the 3 amigos headed down the Southern slopes of Ben More, the sun shining brightly and providing some heat from the bitter cold. Views ahead simply stunning 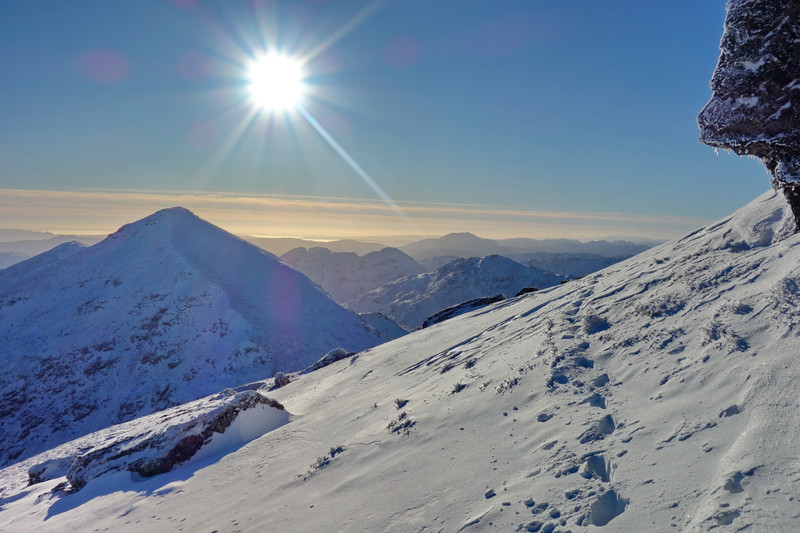 The descent to the bealach was great fun in the knee deep snow. Sandy and I started the ascent of SB and never stopped till reaching its summit, a good wee physical workout. June kept to her own pace and soon was standing on the summit with us. We dropped down its West face out of the biting wind for some sunshine & Irn Bru 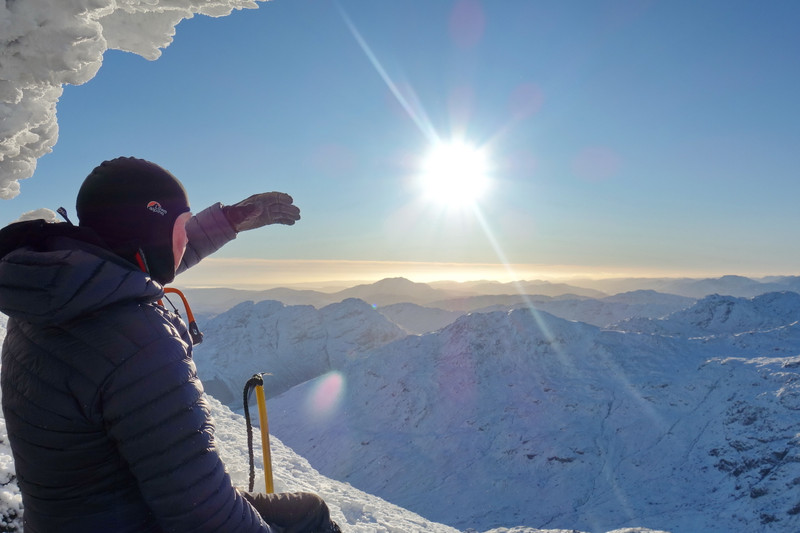 Before making our descent we posed for some photos 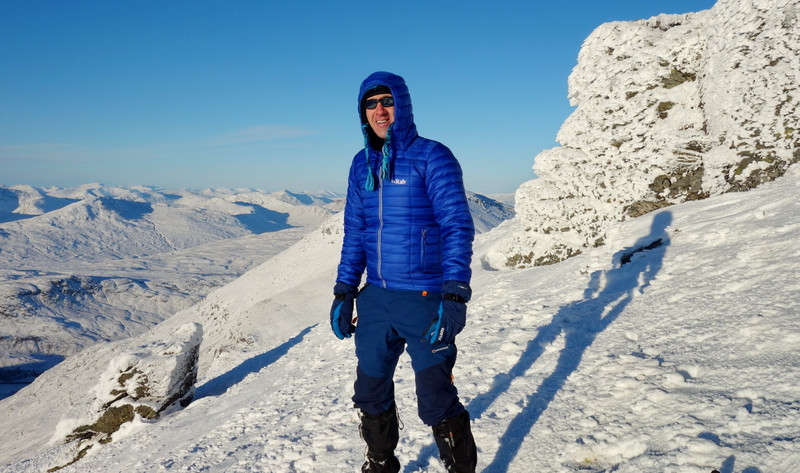 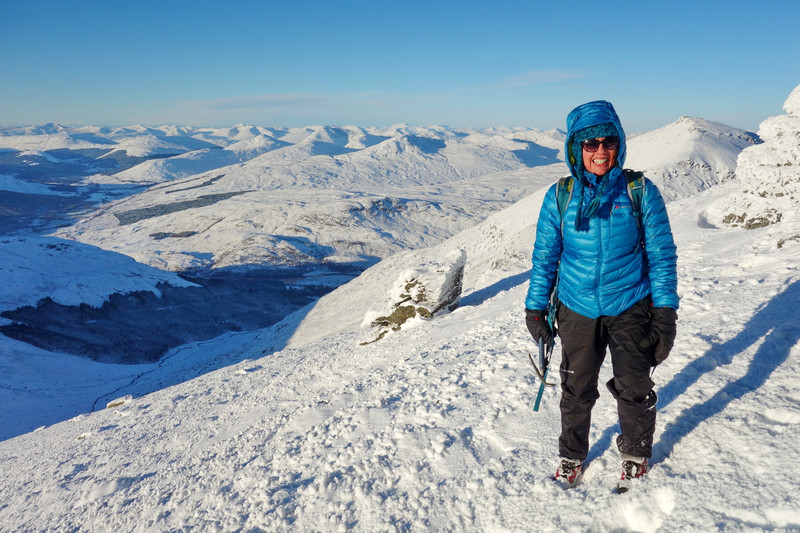 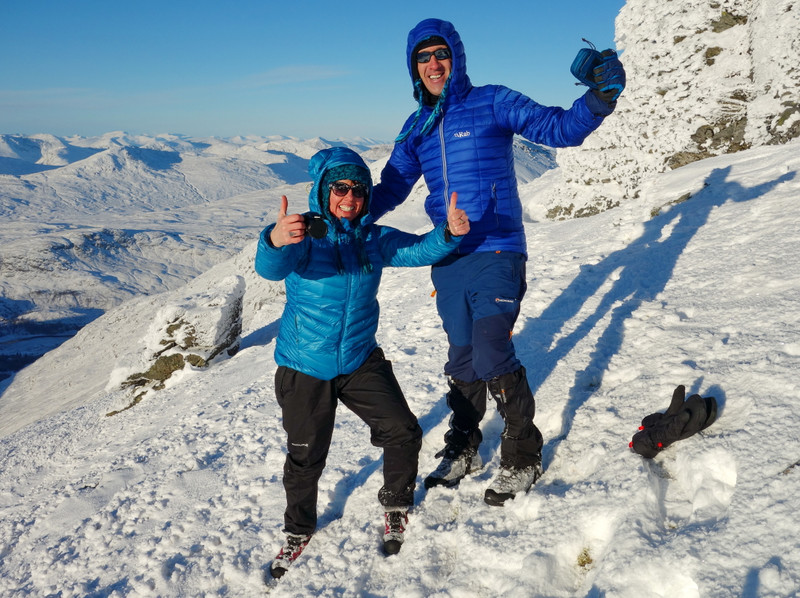 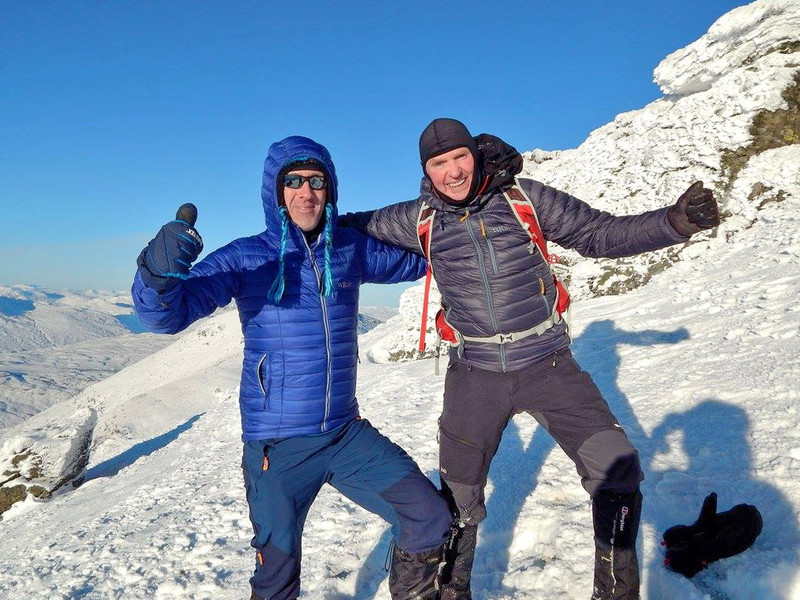 The descent was also good fun as the snow was pretty deep. On lower ground we followed a landrover track back to the start. The sun was setting, providing a nice backdrop for the end of our walk 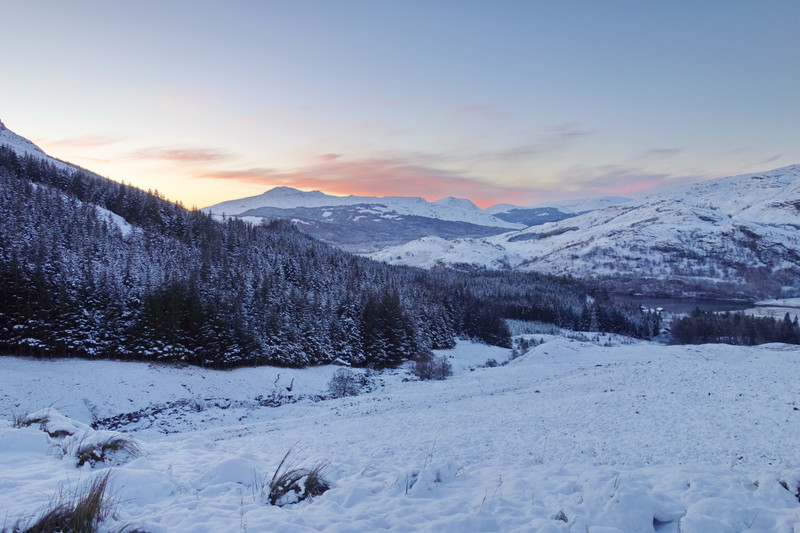 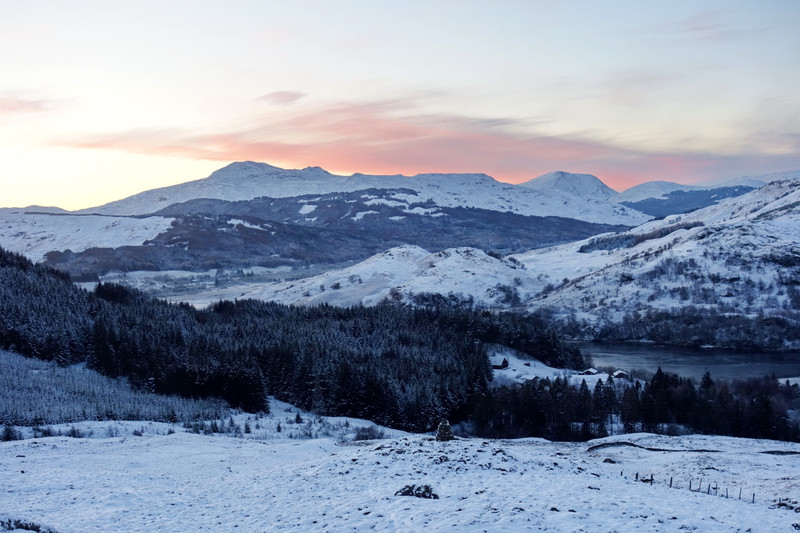 We got back to our cars just as darkness fell. What a great day out the 3 of us had

Sandy was very experienced and provided great stories and knowledge. June was a newcomer to winter walking/walking mountains however she aquitted herself well

A great start to winter with two cracking walks done already, long may it continue

When I climbed these two in October, the wind on SB was so strong I was very nearly blown clean off the mountain

. In contrast, there was no wind at all on Ben More.

That does look like the best of winter wonderland

Glad you got out to enjoy it

Still to do this duo... Too far south for us

They look fantastic in white, maybe I'll get tempted

Another lovely report in superb conditions.

I particularly like the summit views across to SB from Ben More. Fantastic. It's a great feeling being out in that kind of weather.

I did these on a hot day many years ago (I know - a hot day - who'd have thought!

) so it was a real slog going up most of Ben More, but the clag was down nearer the top and Stob Binnein was a bit of a disappointment as it was pretty much invisible. Must go back and do it from the other side some time.

Summit in 2 hours!?! That's going some. There are some fit folk around....