. Not to worry - it wasn't that bad yet. Gill was working down in Kingussie high school today so I went with her and carried on to the Spey Dam. My original plan of Carn Dearg and Creag Liath seemed a bit long for having a cold, and the cloud was down on the high hills anyway, so I'd come up with a 2-part lower level day out instead, starting with Creag Ruadh and a traverse around to the pictish hillfort of Dun-da-lamh, and potentially following up with Creag Dubh later on if I still felt up to it.

It was also a change not to be working or travelling down to the in-laws on my birthday, and the weather wasn't too bad either


Map.gpx Open full screen  NB: Walkhighlands is not responsible for the accuracy of gpx files in users posts
I parked a short distance past the holiday cottage at Sherrabeg and headed up to the edge of the woods. The way up this hill doesn't look too promising from here, the obvious ridge being covered in conifers, but there is a reasonable (if a little boggy in places) route squeezing up next to the deer fence. 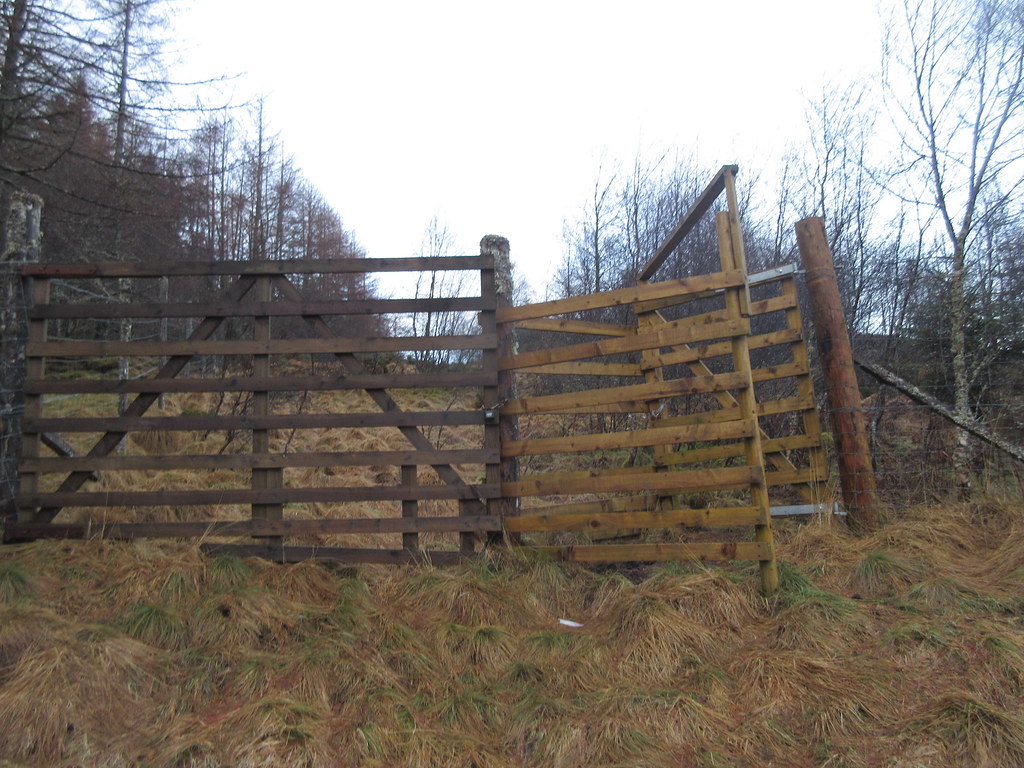 The kissing gates are a new addition since my last time up here - the result of someone on the Scottish Hills facebook page a couple of years ago noting that the locked gates were awkward to climb over, and deterred access. I have to admit I was a little dismissive at first, as I tend to think climbing gates and dragging yourself through a hedge backwards are par for the course on the lower hills. However, she didn't agree and wrote to the access officer at the council. Before long, the estate had agreed to put kissing gates up at the top and bottom exits to the woods. Good effort, Eileen Stark 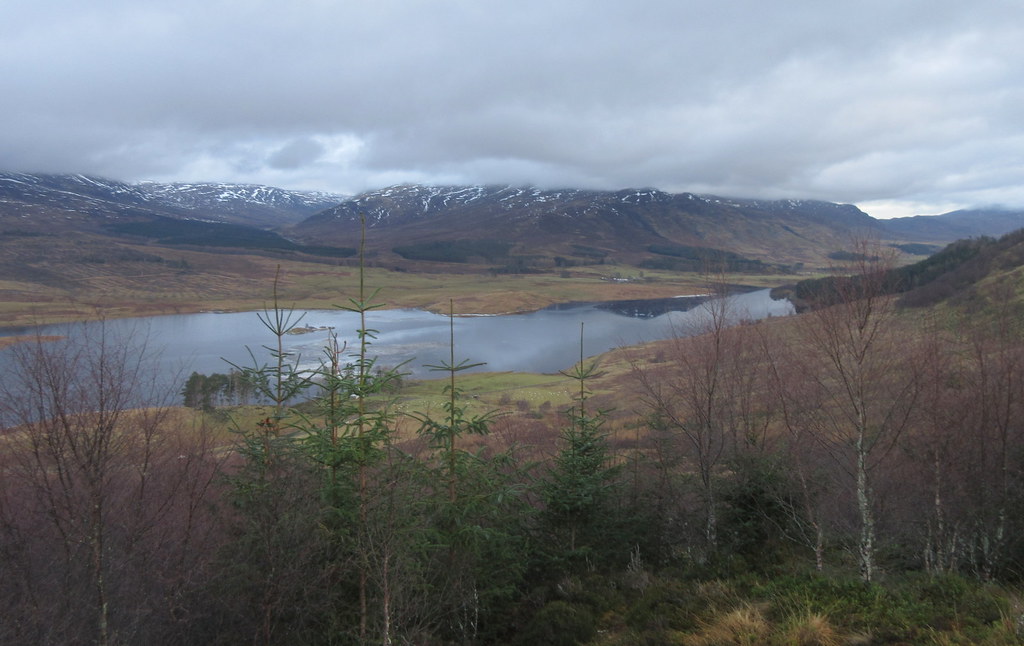 Across the Spey Dam reservoir to Beinn a' Chrasgain

Above the forest, things get a little more heathery, then I was into the cloud. This wasn't part of the plan! On the summit, I had a good 20 minute break while the mist swirled about, almost breaking at times. 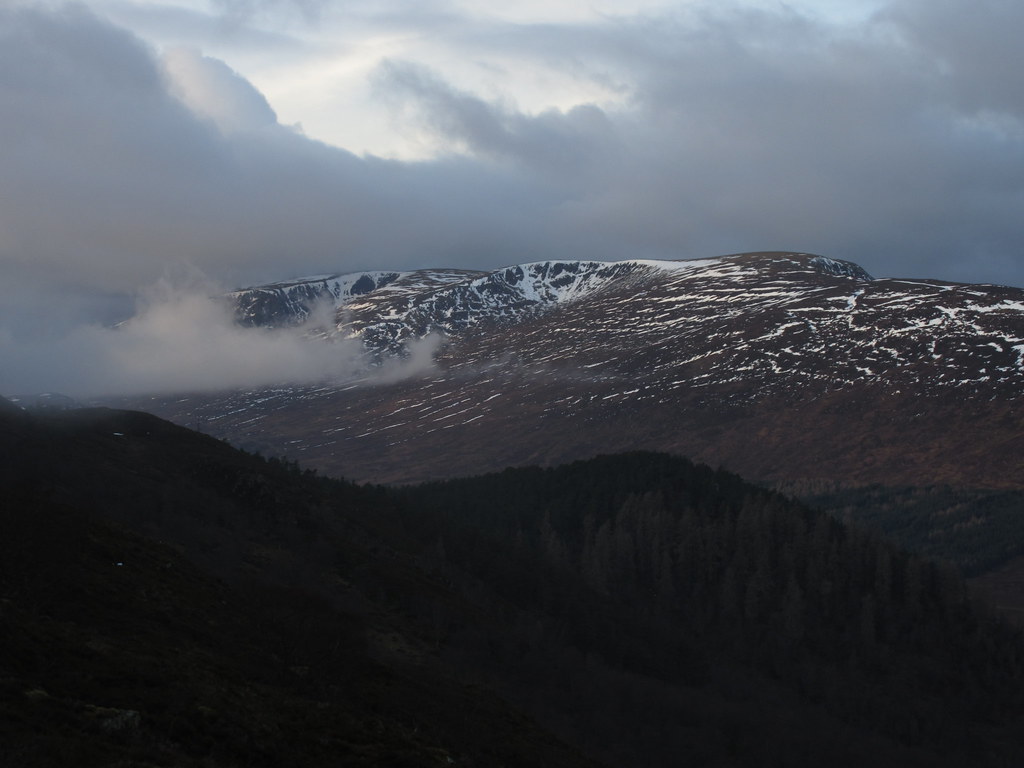 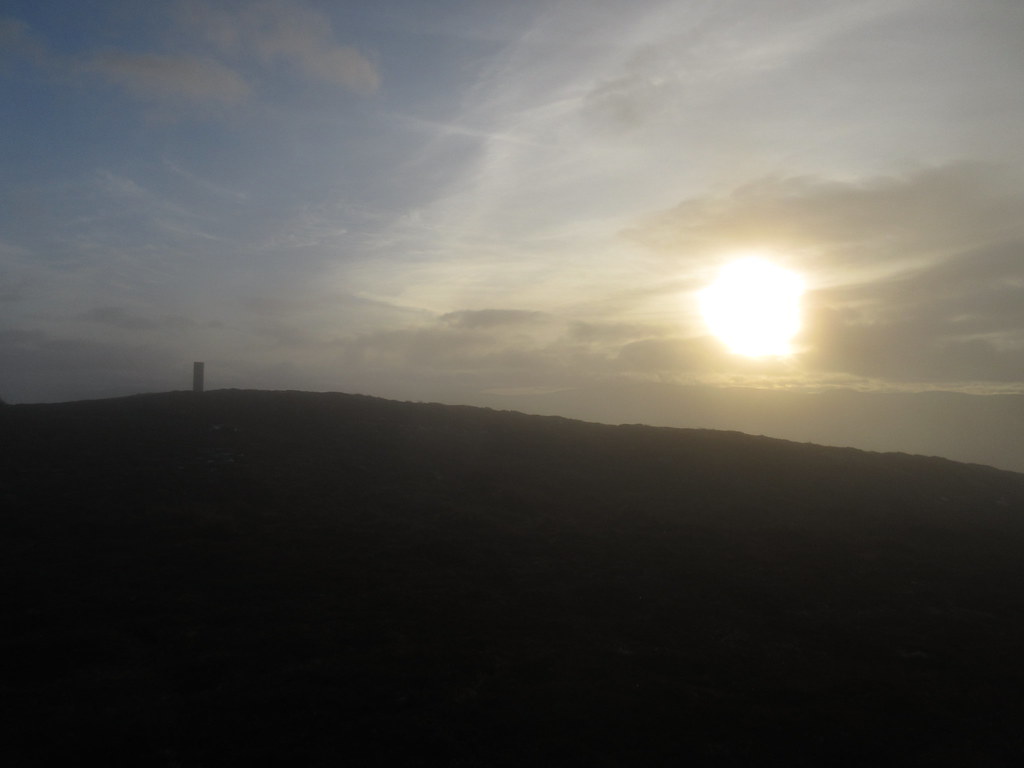 Almost clear at the summit... 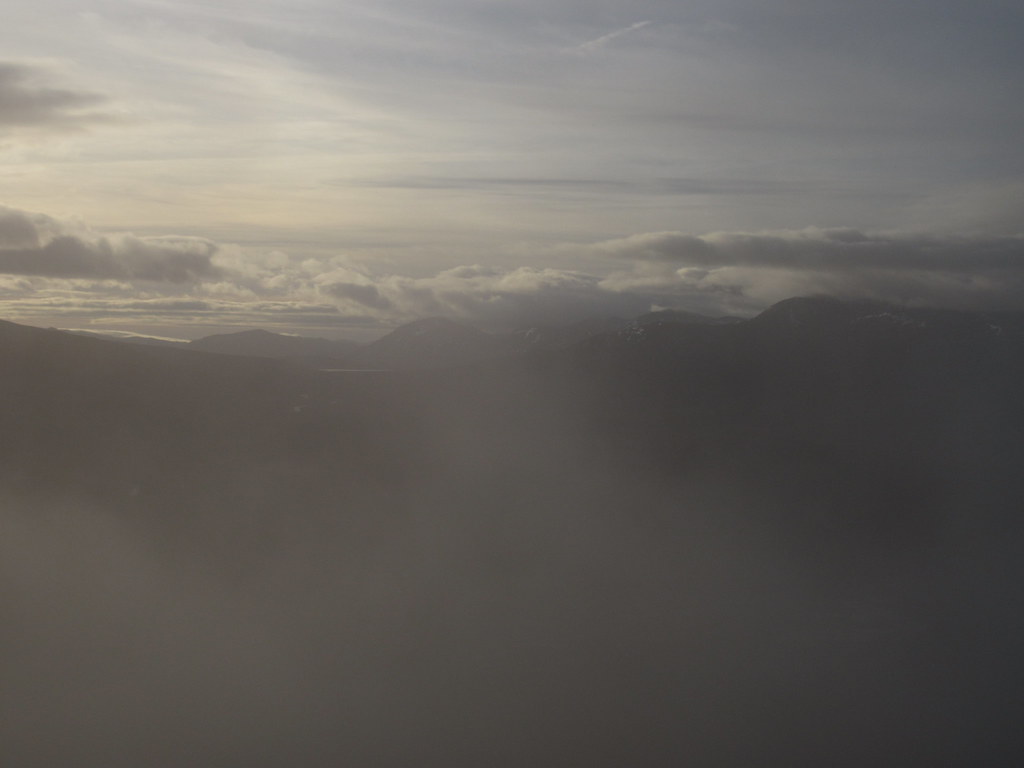 ...but not quite clear enough

In the end I opted to drop a short distance towards Loch Laggan, hoping to get below the cloud, before contouring back to the main body of the hill. This turned out to be a good move, as the curtains were drawn and this hill's main asset was revealed...perfect 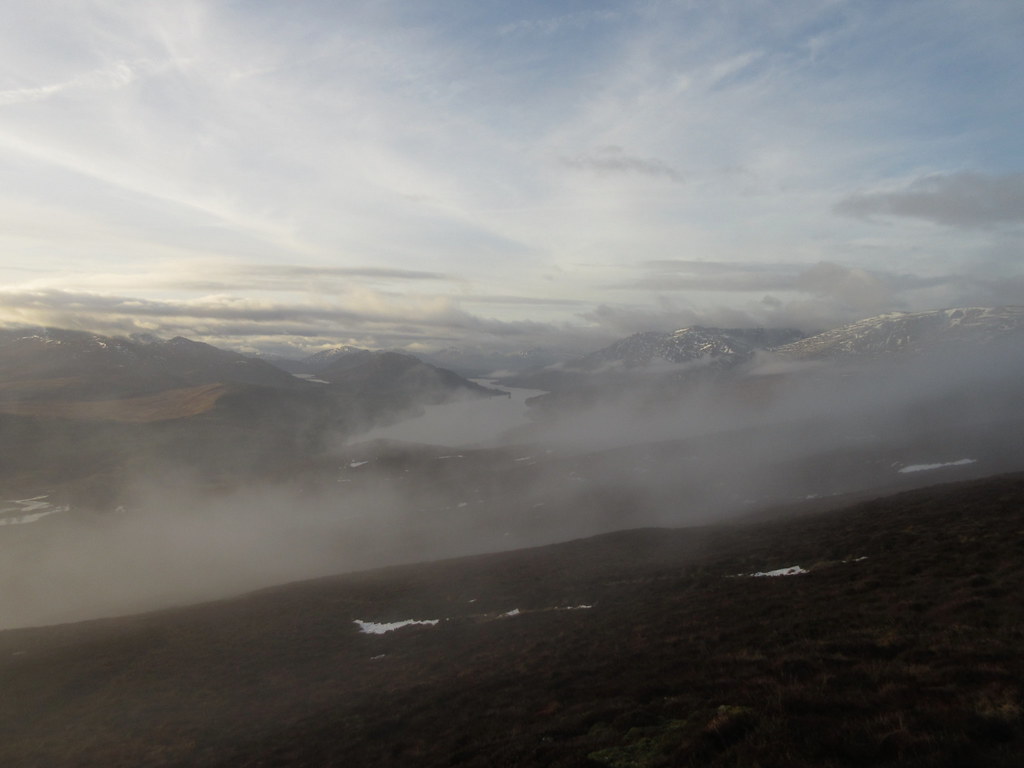 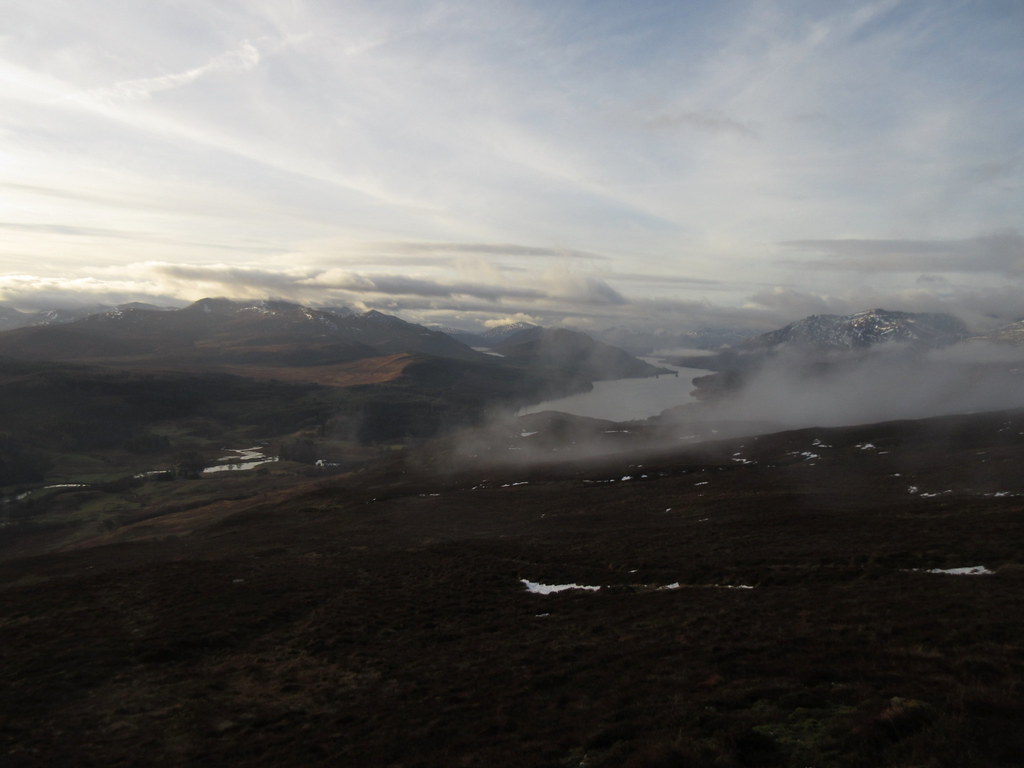 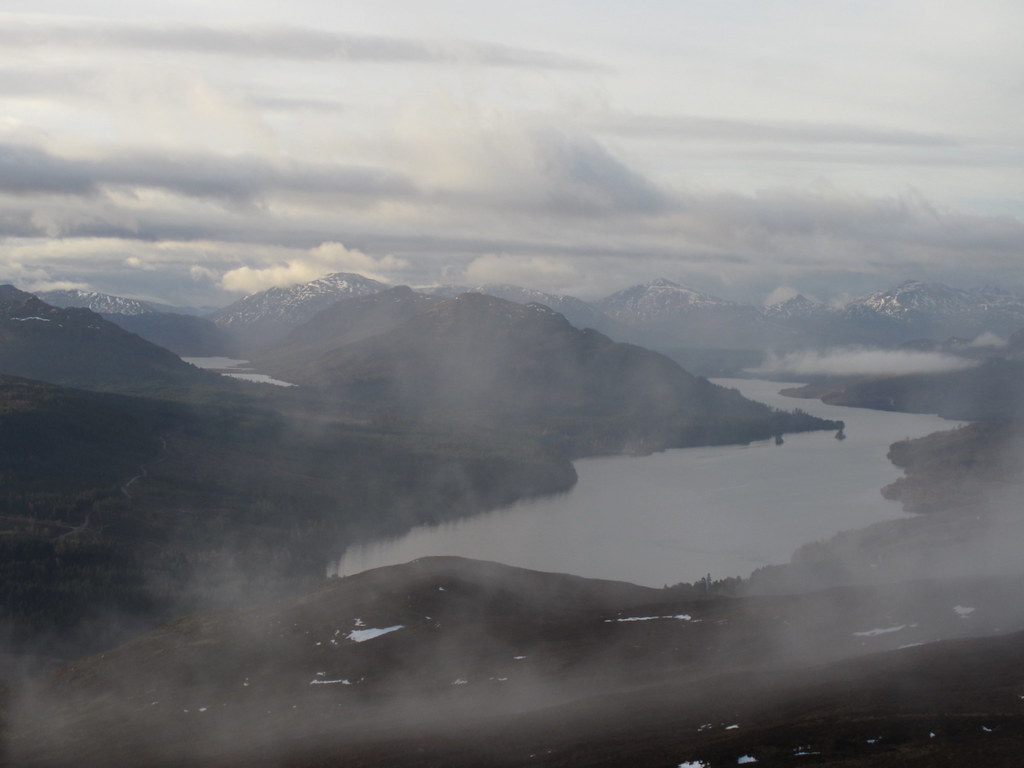 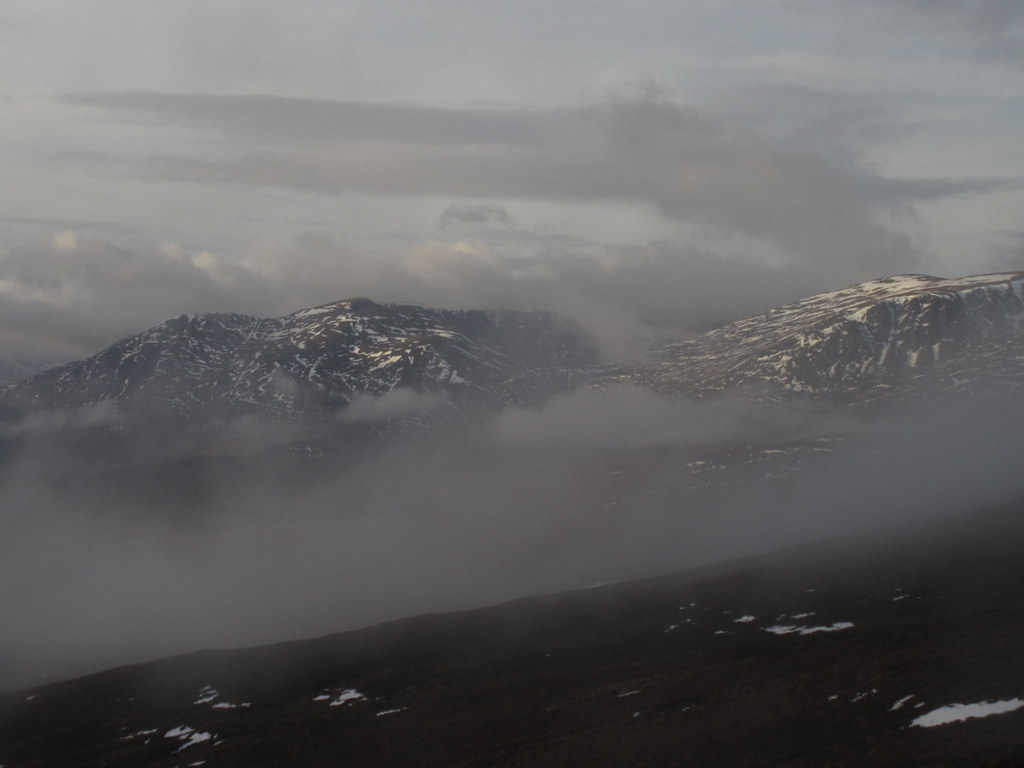 Creag Meagaidh somewhere over there 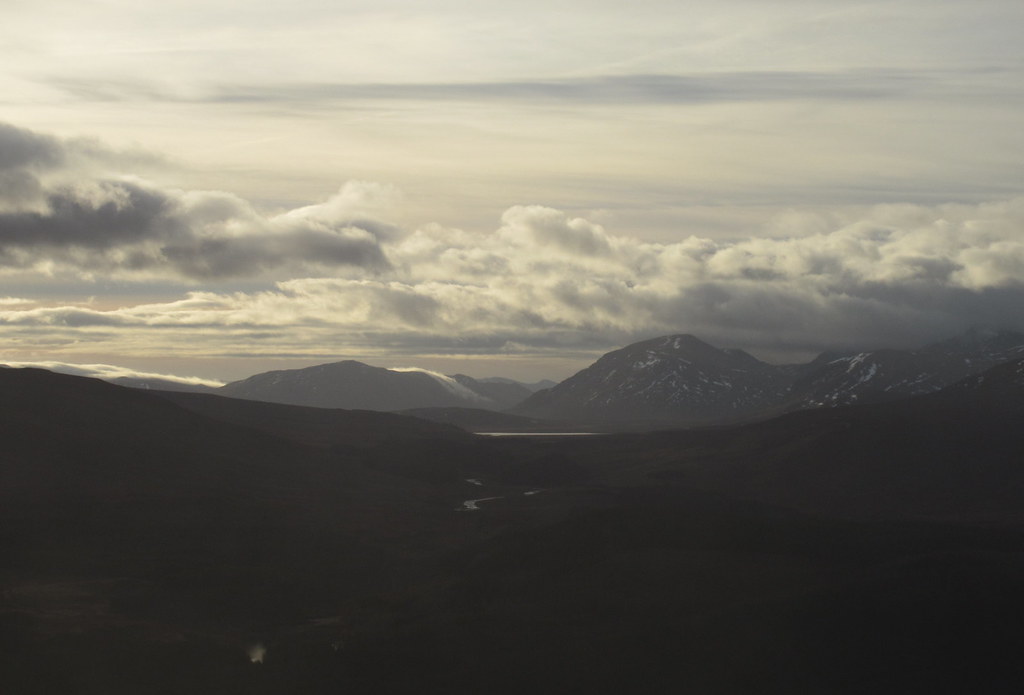 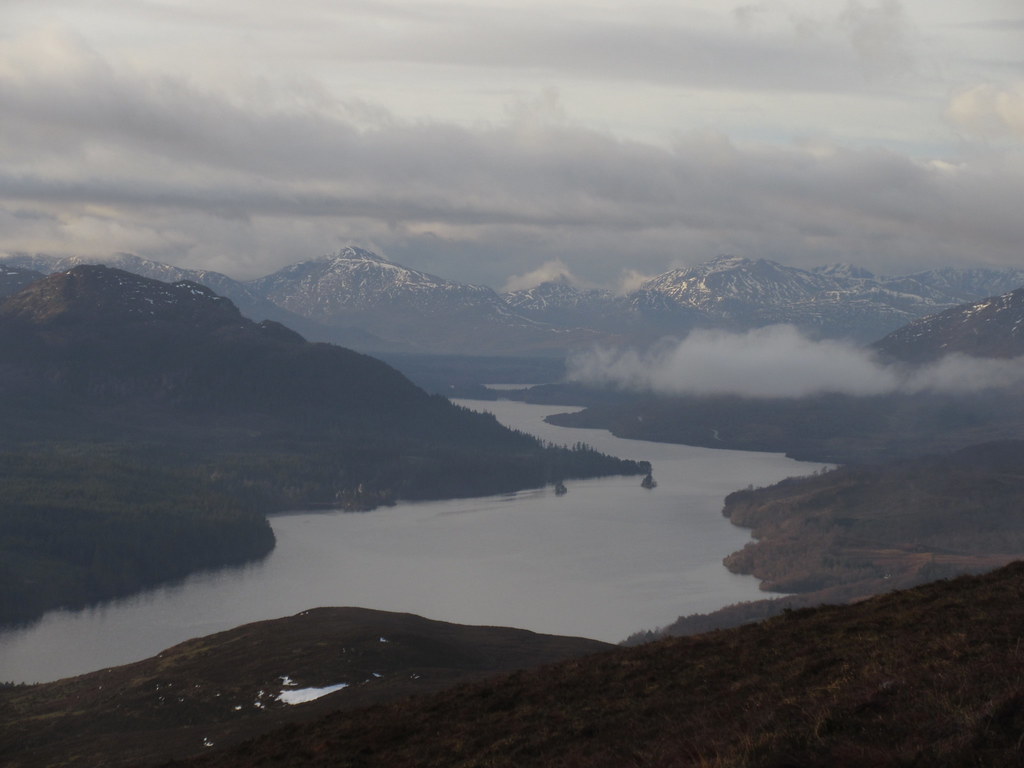 That's more like it! Loch Laggan and the Easain hills/Grey Corries 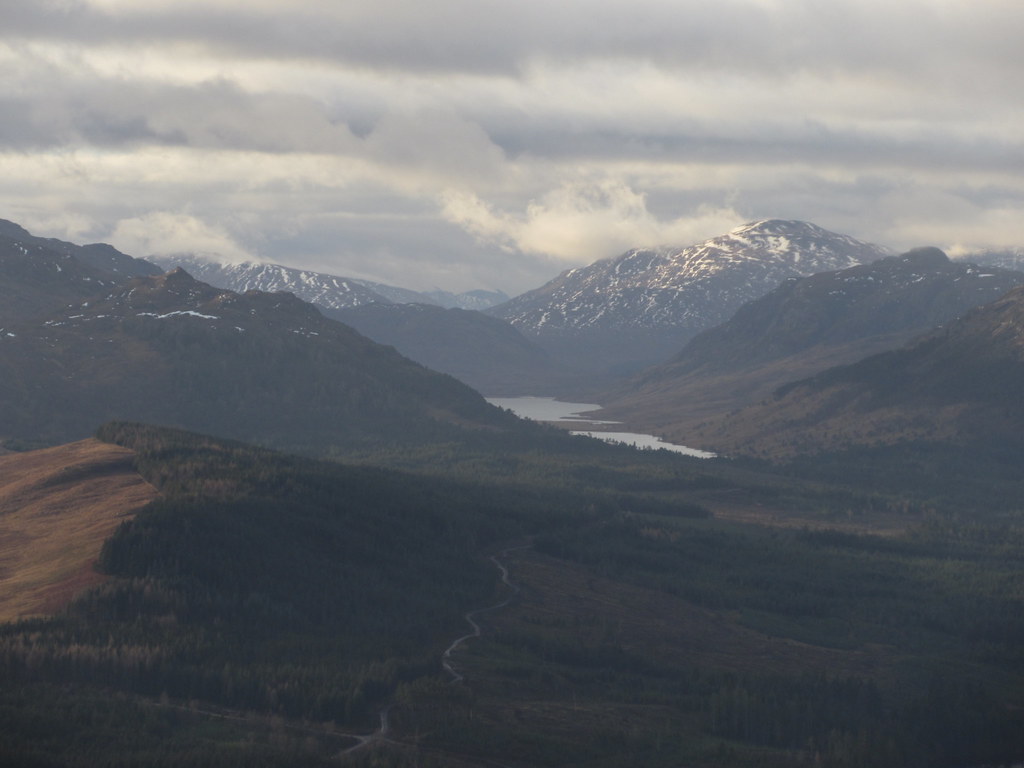 An easy contour back east took me towards the 560m summit then onwards into the woods again. On my previous visit, I had dismissed the eastern part of the hill, deciding that it looked too conifer infested, despite the obvious horseshoe ridgeline that could be followed. However, having looked with interest at the hillfort at the eastern end over the years, I decided it would be worth a visit. 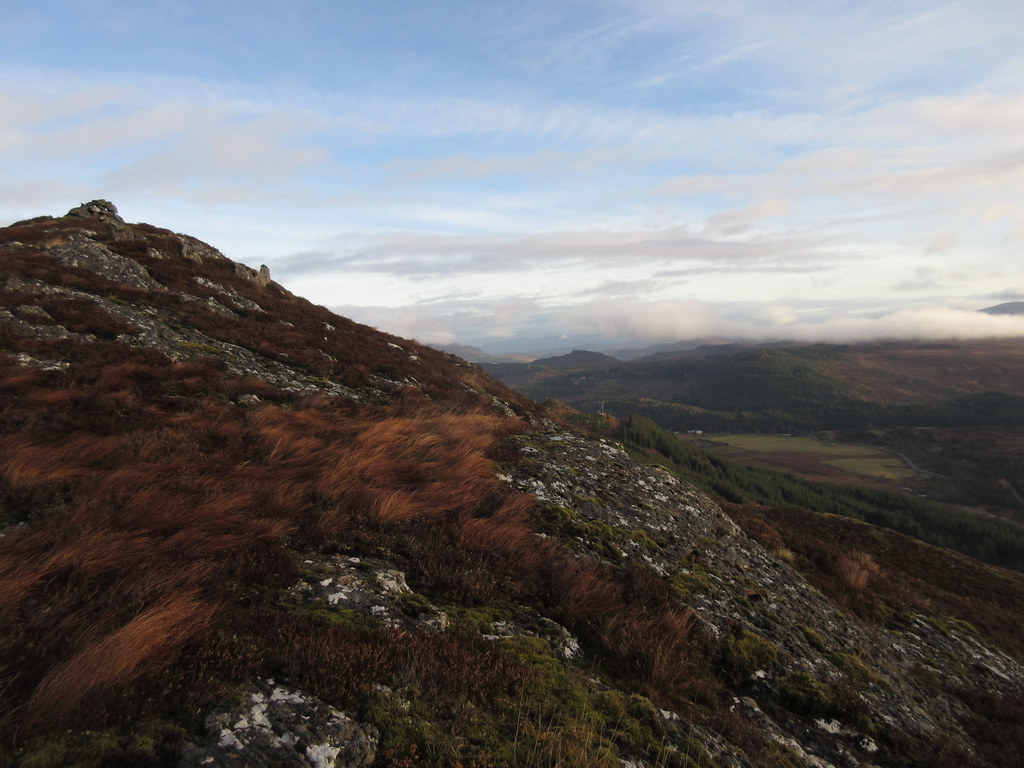 East from the 560m summit of Creag Ruadh 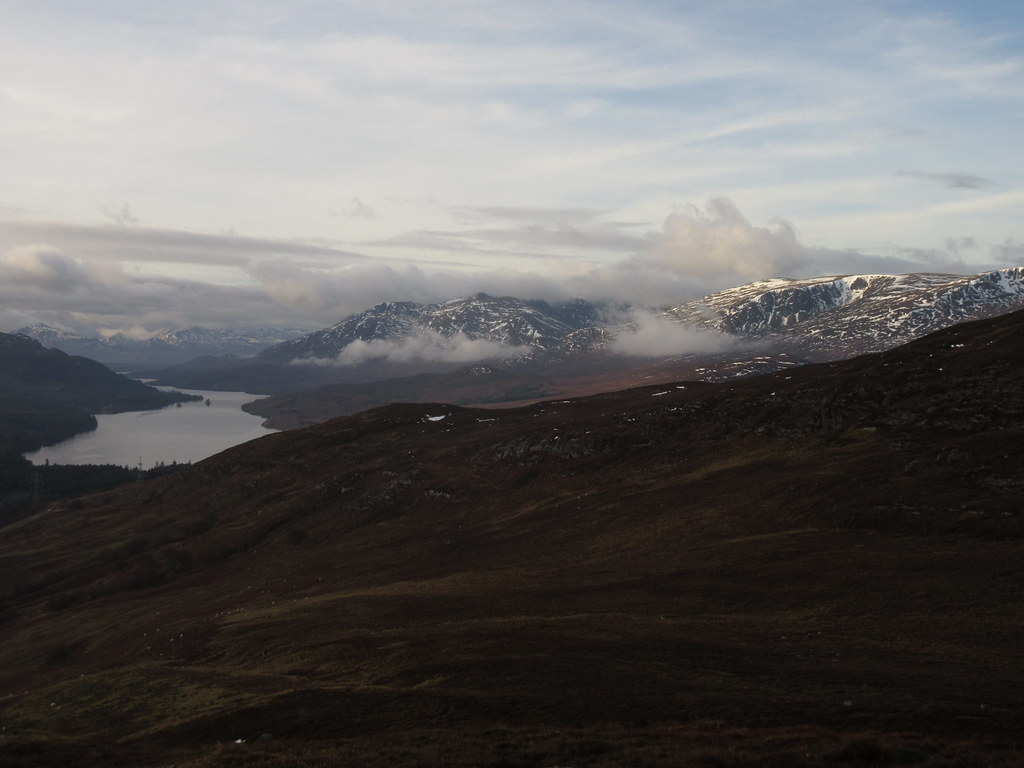 Last look back to Loch Laggan

On the ridge, the trees turned out to be well spaced and there were traces of a path. There were a couple of small boggy sections but I soon met a signposted walk which led me steeply down through the trees towards the fort. I was glad I had done this as it was a nice walk. 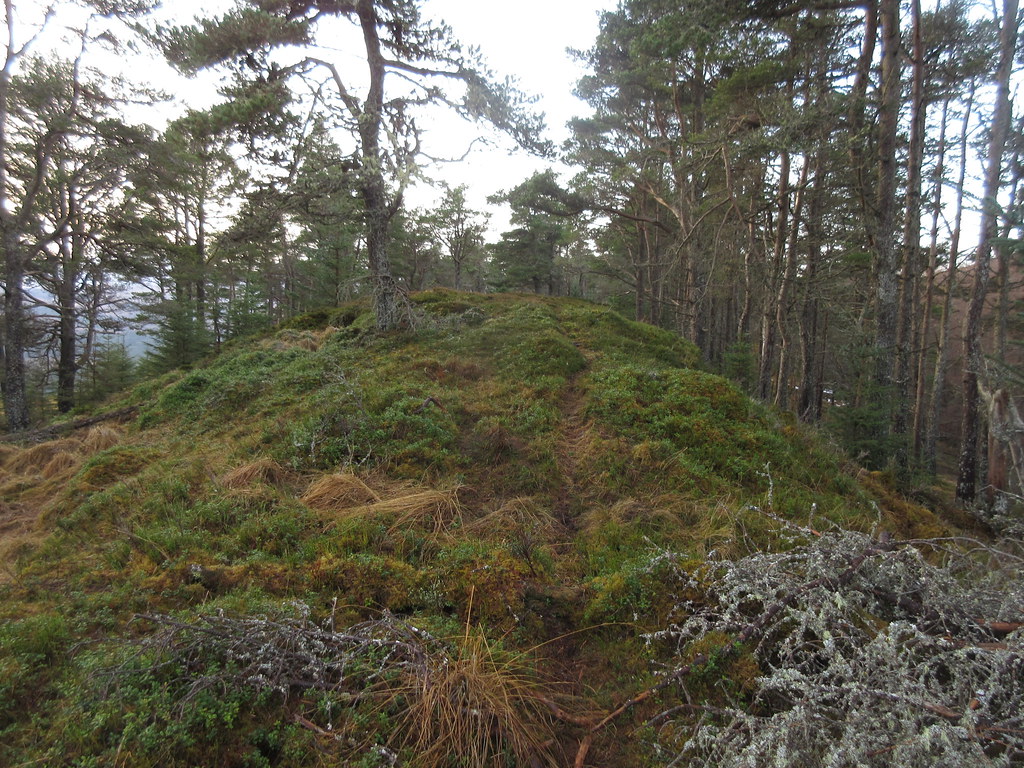 Following the ridge through the trees 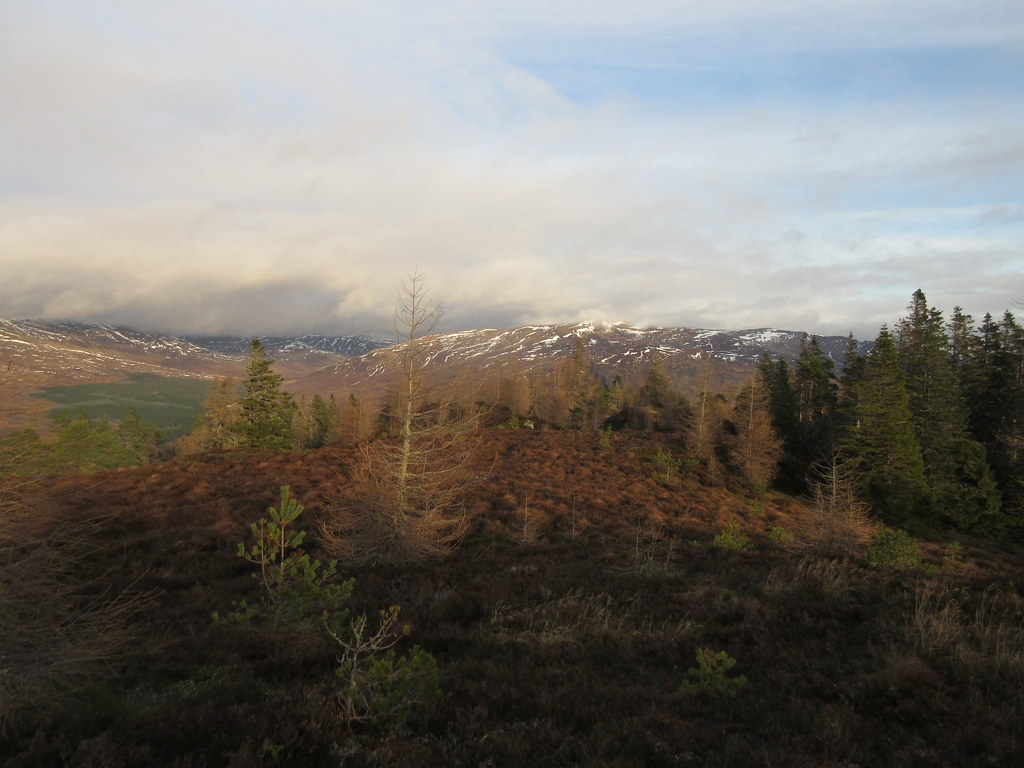 Across Black Craig to Beinn a' Chrasgain

The hillfort was quite obvious - some of these are barely visible, but this one had the remains of some quite prominent walls, quite reminiscent of the one on Bennachie. Great views from here too. 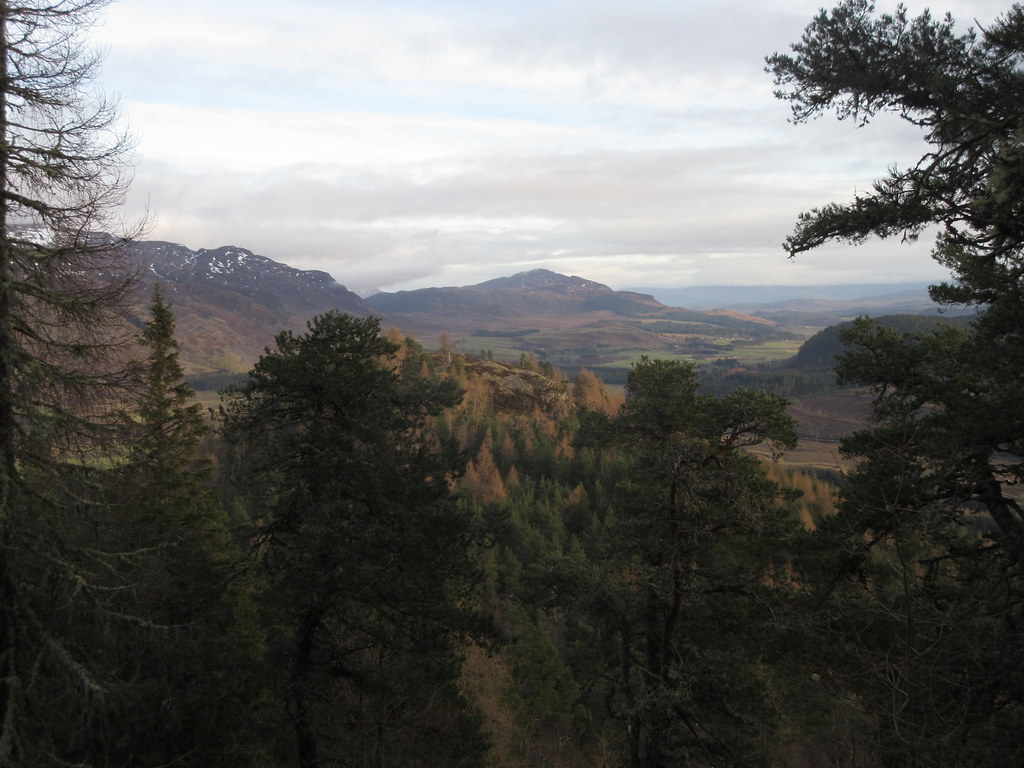 I was about to head back to the car when I got a text from Gill saying she needed to be at a meeting at the other school she works in, back in Inverness. I had already wondered whether I had enough time to go up Creag Dubh, and now it was most definitely off the menu. 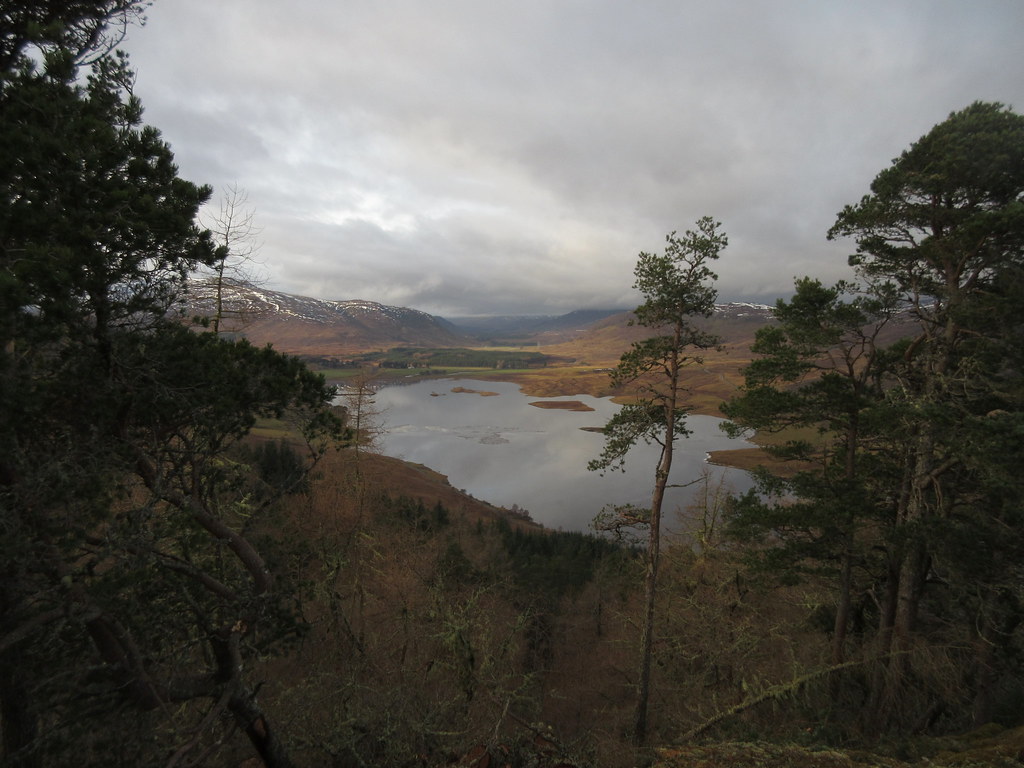 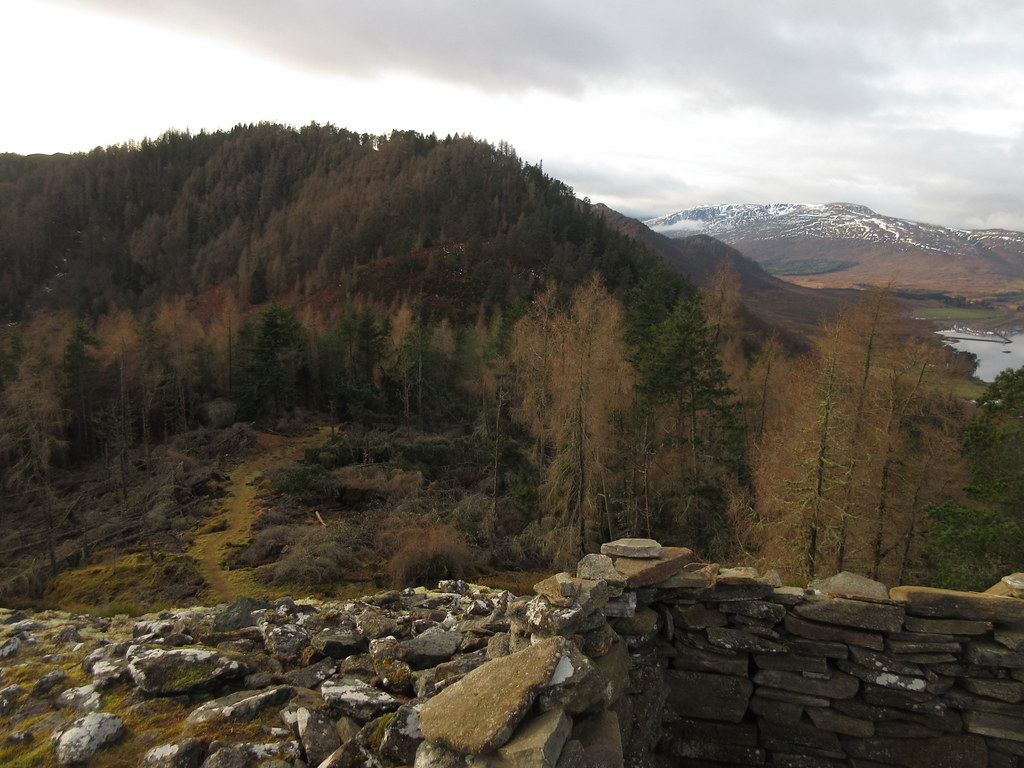 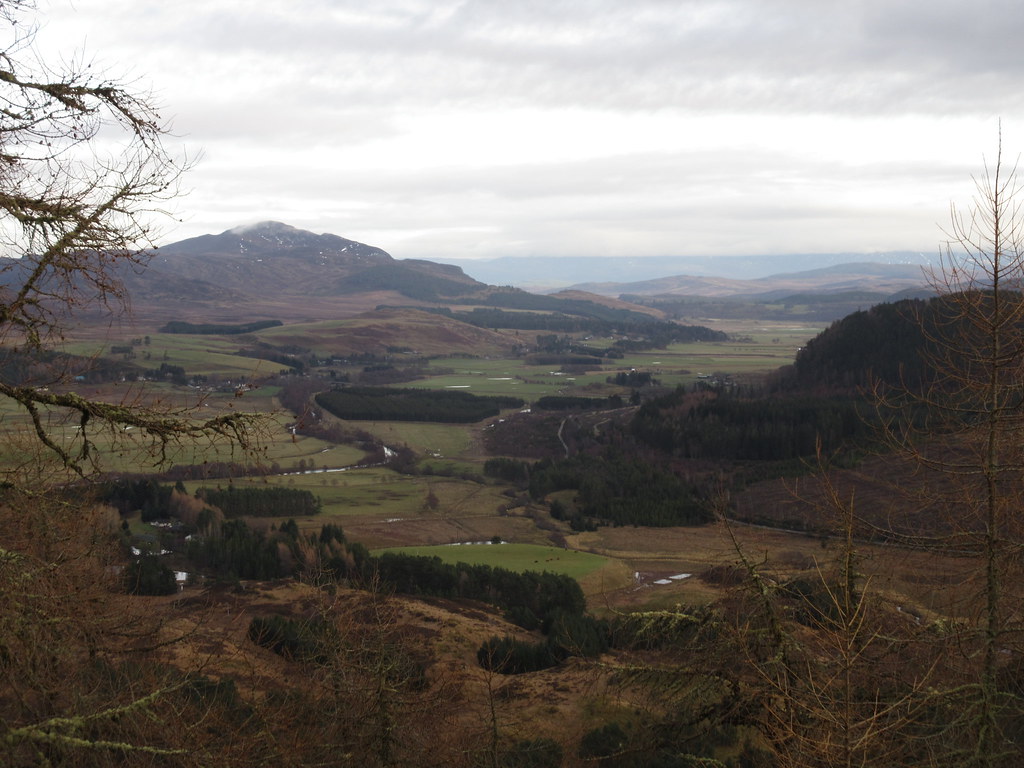 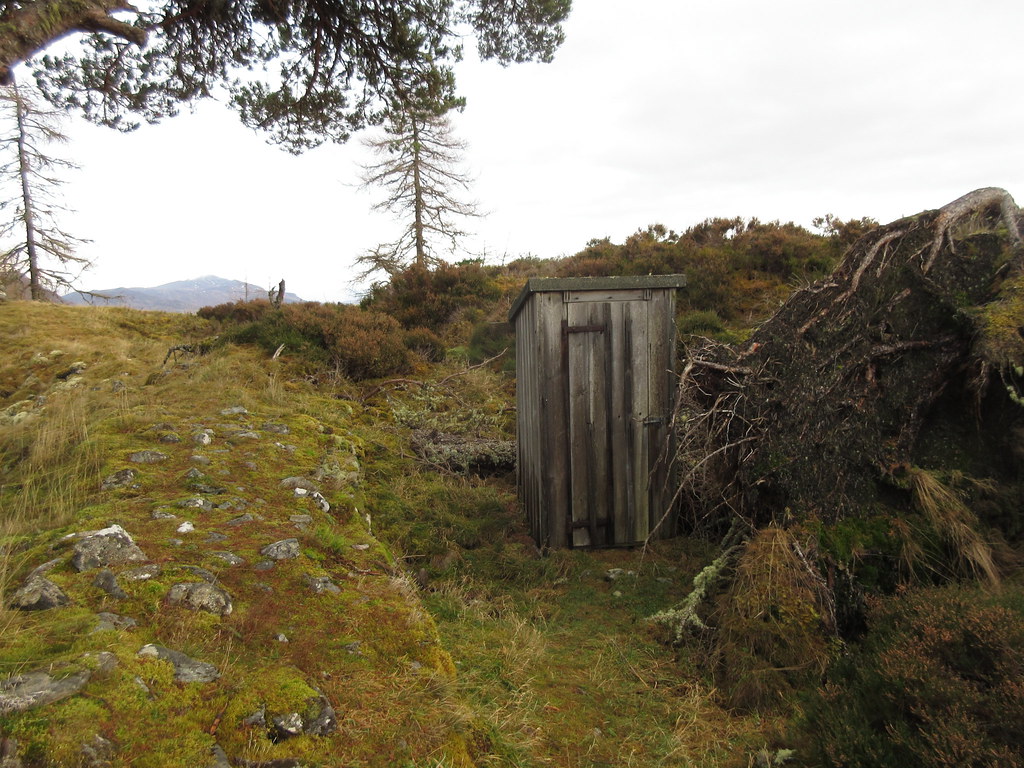 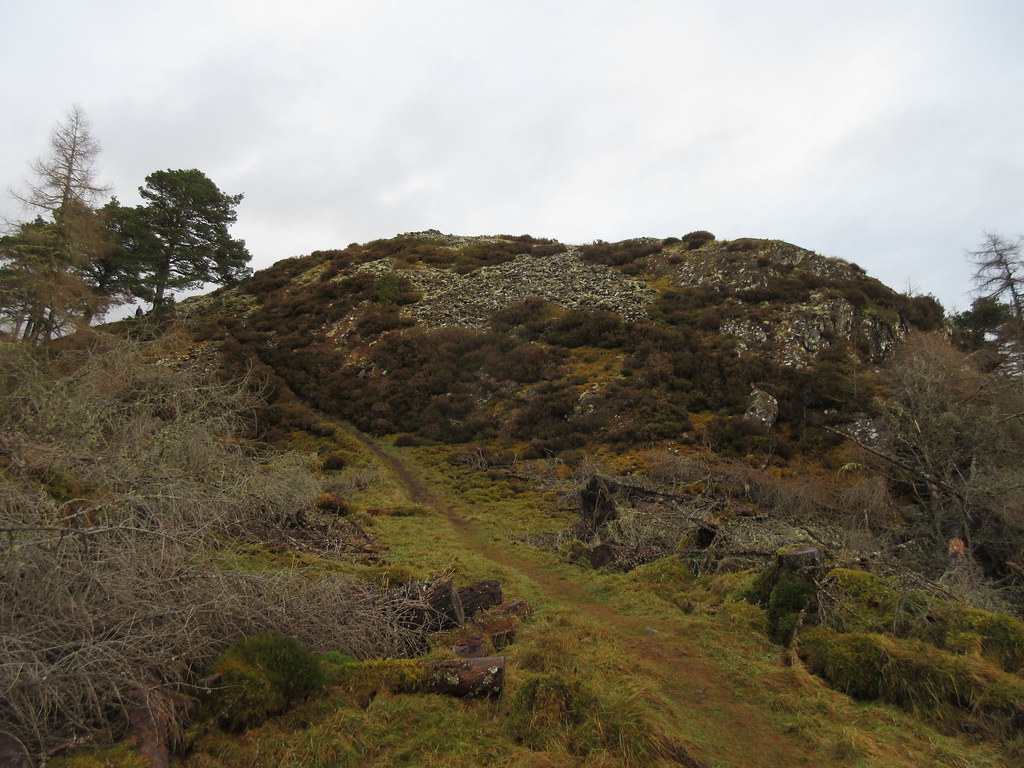 The only minor problem here is that the waymarked paths all descend to the south, and the north is quite thickly forested. There was a short struggle through some conifers followed by a climb of a couple of deer fences and a crash through a newly planted area before reaching the road, followed by an easy 5 minute stroll back to the car. I was able to get back to Kingussie in a reasonable time, and shortly after Gill dropped me off at the house, it started raining. Not bad timing, and a nice easy morning out 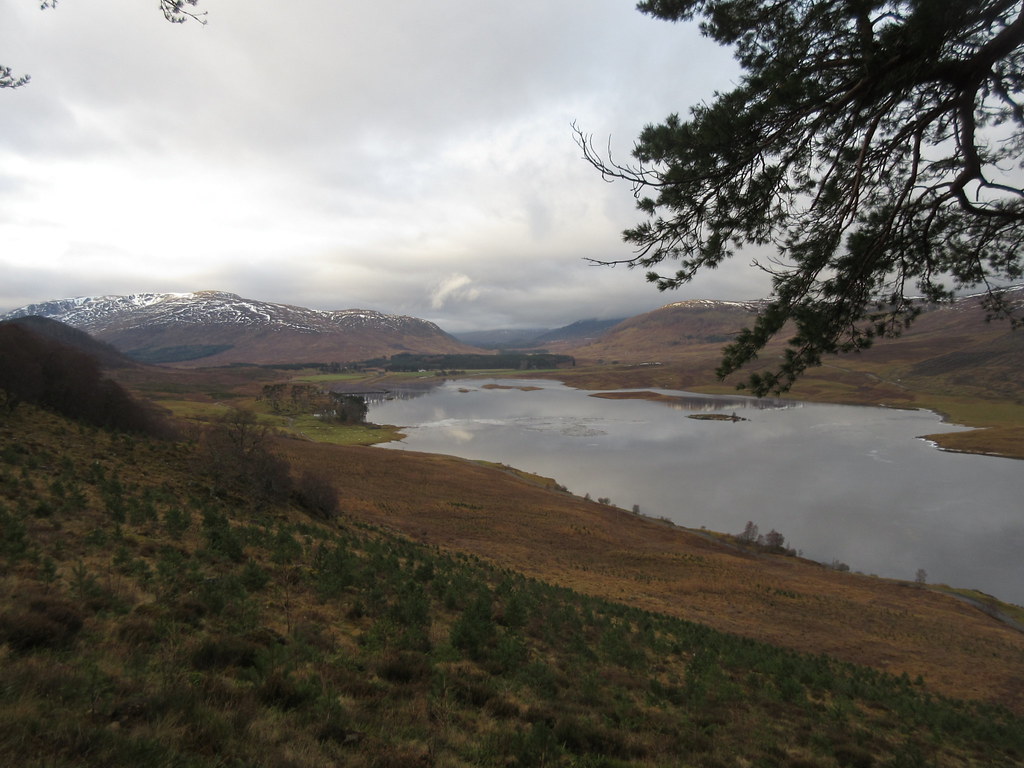 Descending to the reservoir

A belated happy birthday! Always interesting to see somewhere a bit different though no chance of me vaulting deer fences and the like. But the hint of sign posted paths to a Bennachie-esque hillfort duly noted for future consideration and spousal mollification.

Happy b'day from us, too!

Creag Ruadh is on our shortlist for this winter, so we shall follow your footsteps soon. Hoping for some snow on the summit! The fort looks interesting and definitely worth the detour. Though maybe we will skip the forest trashing and take a longer walk on the official path

The paths to the fort are a little vague on the map, hence why I'd never spotted them before, but this description gives you the deer-fence free route. You could probably make up a route taking in Creag Ruadh from the south as well.
https://www.walkhighlands.co.uk/cairngorms/dundalamh.shtml