Munros included on this walk: An Gearanach, Stob Coire a' Chàirn


26th. July, 2005
My fifteen year old son Tommy, his mate Chris and I had spent the last couple of days climbing Aonach Beag, Aonach Mor, Ben Nevis and Carn Mor Dearg from Glen Nevis and had camped in an idyllic spot on the previous afternoon by the Water of Nevis; as we had even managed a small fire, morale was high. 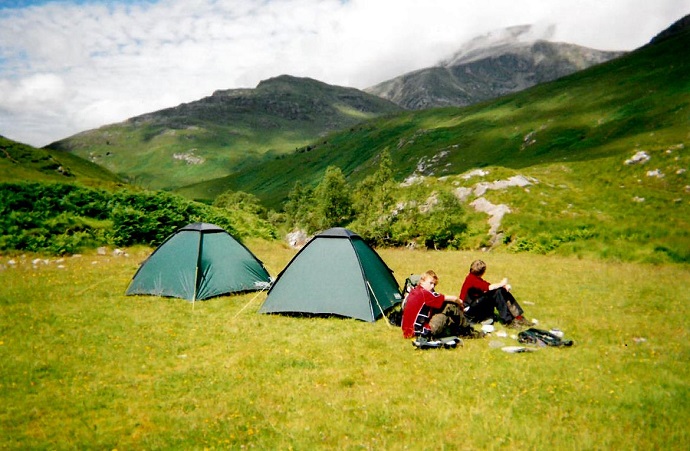 Tommy and Chris camped by the Water of Nevis on the evening of the 25th. July, 2005

A warm morning, however, saw our little group's sense of purpose flagging a little on the approaches to the steep north east ridge of An Gearanach; what had been billed as a quick round of a couple of the Mamores before the trip home seemed to be taking more out of the boys than expected. Everyone dug in, however, and the summit was soon underfoot.

our_route.gpx Open full screen  NB: Walkhighlands is not responsible for the accuracy of gpx files in users posts
From there, things became easier and the narrow ridge south to the Bealach a'Chadha Riadhaich was brilliant, leading easily to the short climb onto Stob Coire a'Chairn. We descended to the east from this second summit and picked up the intricate little descent path into the corrie below before heading out along the western bank of the Allt Choire na Gabhalach. The descent was notable for large herds of deer traversing the hillsides above us into the col between Binnein Beag and Binnein Mor and for the lads discovering a couple of spent cartridges, clearly left behind by some stalking party in the last twelve months or so.
At length, we crossed the Water of Nevis, regained the tents and, after a brief rest, packed up and headed back to our Fiat Panda, parked at the Head of Glen Nevis. Three days of good weather had ensured as good an introduction to the Scottish hills for the lads as anyone could have hoped for and, as we drove south in more sunshine, we were all keen to see more of the hills.
Next Report: https://www.walkhighlands.co.uk/Forum/viewtopic.php?f=9&t=77484.