our_route.gpx Open full screen  NB: Walkhighlands is not responsible for the accuracy of gpx files in users posts
Final Xmas visitors left yesterday and the forecast for Friday & Saturday is poor so today was a must do. Another short hill required from my winter list so I decided to clear my last wind farm hill from the list, Common Hill at Douglas.
The car was frozen solid as were the minor roads on my journey and I was pondering the state of the Common Hill track with the recent snow and freezing conditions. Only one way to find out.
Arrived safely at Douglas but my front wheel drive powered system does not like these conditions, a slip and slide trip.
This is a short hill so I decided to park in Douglas itself and extend the walk, lovely day and nothing else to do but enjoy the great outdoors. Car temperature showing -1.5deg, cool. If you are in a rush you could drive up and park at the wind farm entrance which would take off circa 2.5m from my trip distance. Icy Station Rd
Along the main street, past the primary school, turn right and head up the only road ( Station Rd, I presume there was a railway station at some point), towards the lower farms and then the turbines behind. Approaching where station would have been
As expected this stretch had not been gritted so walked the grassy stuff at the side. I had been given a pair of Yaktrax Pro which were still in the box. Will I, won’t I try them, not yet. Windfarm notice
I arrived safely at the wind farm entrance cattle grid but was surprised by the name of the hill farm (Hagshaw Hill), was I at the wrong wind farm, where is Common Hill? I hadn’t thought a map would be necessary but checked my GPS and yes it did go to Common Hill. Track to Common Hill
There isn’t a lot to say about the route, follow the icy track up, keeping the trees close to your right but do not follow any of the tracks into the trees. There was a strong icy breeze and most of the turbines were rotating. Hello, a white van is coming down towards me, there are other people around. Turned out to be quite a few workies on site but I never got the chance to speak to any. 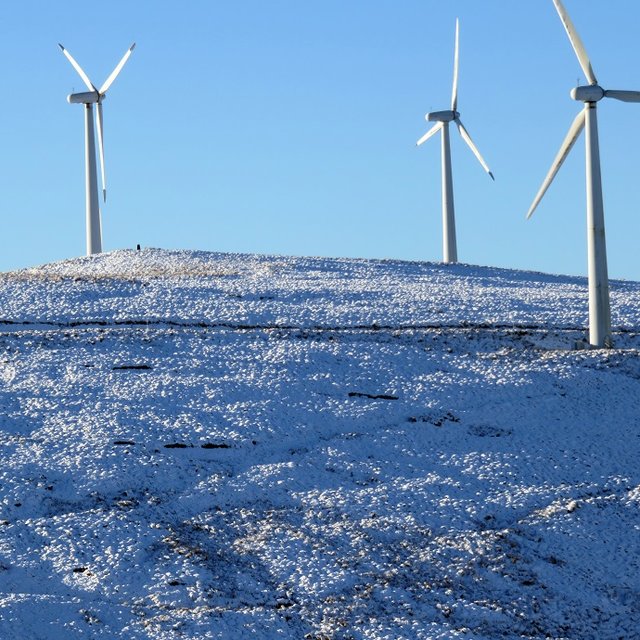 Trig just visible to right of left turbine
After a few false tops you are well and truly amongst the turbines and then at the next group of turbines a trig point can be seen. Follow the track below the hill then back around to another turbine leaving a short hop through the snowy tussocks to the trig. Snowy crossing to trig
Once again if you can ignore the turbines the visibility is excellent on this clear, crisp, blue sky day. Not far away is Tinto but it had a reasonable head of cloud covering its higher reaches and this had remained there all of my walk, disappointing if you put in the effort to see the views from there. Tinto in cloud
All the hills, as far as the eye could see, were covered in snow, a lovely winters day. Behind me Cairn Table and its summit cairns clearly seen. Cairn Table
Sadly, if you wanted to count the all of the turbines in the 360 degree view you would be well into 3 figures. I know the green energy argument but at some point tourists will not return. Common Hill trig
There were fresh footprints around the trig so another body has been here recently.
Simply followed my route back, nice views of Douglas below. Many impressive dwelling properties and another area rich in Covenanter history. Douglas in the valley below
I did not use the Yaktrax so will experiment with them on another day. Although this walk is close to traffic today (traffic on m74 easily seen) it was nevertheless a silent walk, bar the sounds of the turbines blades turning and the noise from the occasional descending jet. Plenty of contemplation time. Wildlife sightings zero apart from a tup standing his ground on the track.
Got the kids for a couple of days so possibly my last outing of 2017. This hill was at the back of the queue but because of the weather it turned out to be not so bad after all. No such thing as a bad hill!!

Re: A blue sky winter walk on Common Hill

Looked a lovely day down there, a bit cloudy up here in Morayshire