Munros included on this walk: A' Mhaighdean, Ruadh Stac Mòr

28 people think this report is great. Register or Login free to be able to rate and comment on reports (as well as access 1:25000 mapping).


We've had these last 2 Munros left to finish off our second round for a couple of months now, but were holding out for a good day for it. Having had our family Christmas time already, we decided to just go for it

WFisherfield 25Dec17.gpx Open full screen  NB: Walkhighlands is not responsible for the accuracy of gpx files in users posts

we set off on our bikes wearing lightweight boots, with the winter boots in tow. After 6km, we left the bikes at the start of the forest just after Kernsary farm. The long walk in had a few obstacles - almost immediately in to a boot-sinking dung field

then soon after the track was flooded so we instead went for a crawl under a fallen tree and swinging around another, hanging on to slimy branches

But once we were out of the forest it was a simple task of following the track, which we were grateful for in torch light. Water levels were very high, so we also went for the extra half km up Strathan Buidhe to cross the footbridge then back down again

Day light was beginning to appear as we reached the path that would take us along to the causeway. Stopping to switch boots with much relief, it had taken us 4hrs to get to this point... so I was still confident we were on track for the 15hr day we had planned 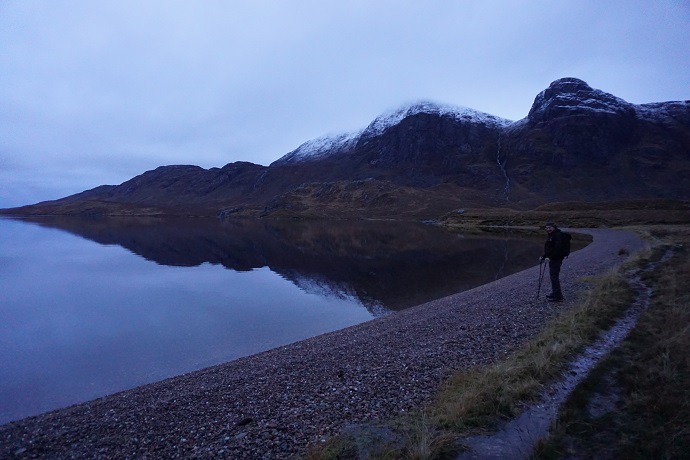 First light as we skirt the end of Fionn Loch 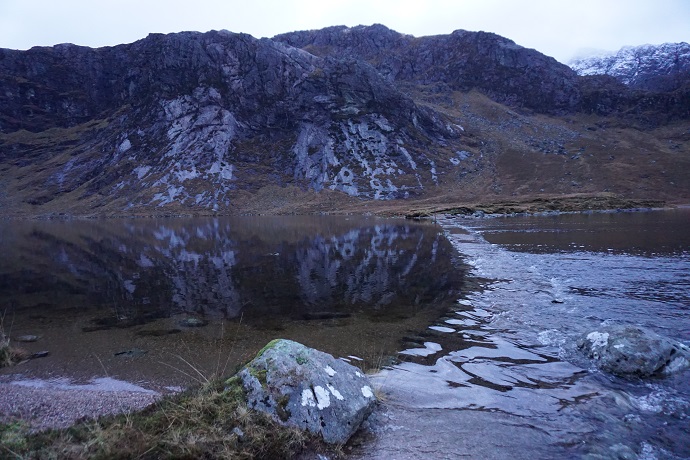 Just crossed the causeway, using the edge as stepping stones! 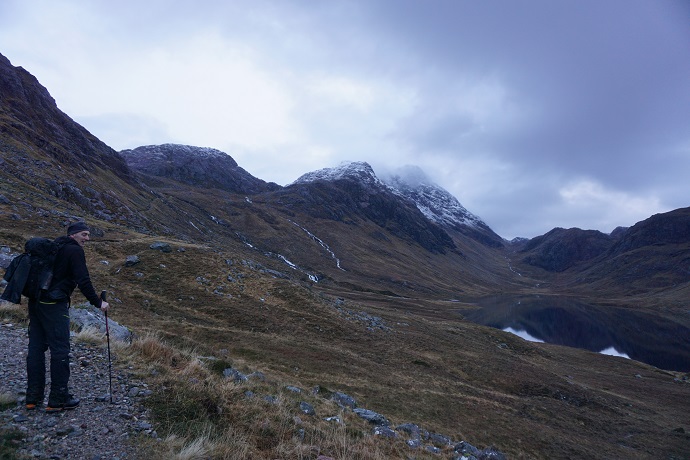 Our route ahead: up to the left then looped back around to come out on the right of this view

Having crossed the almost flooded causeway, we were now unsure of what to expect of the burn crossing up ahead of us. It was in spate, but we managed across without any big issues - feet stayed dry anyway

So we carried on up the path between the 2 hills, pausing to check the glass-like water (no breeze at all today) and the stone circle (matching the one on Beinn a'Chaisgein Mor behind us). The path soon disappeared in the snow so we took a more direct line up to the shoulder of RSM. 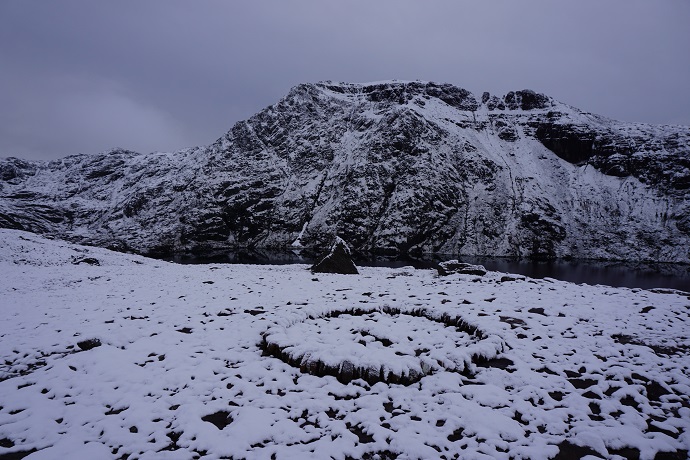 Stone circle looking on to A'Mhaighdean 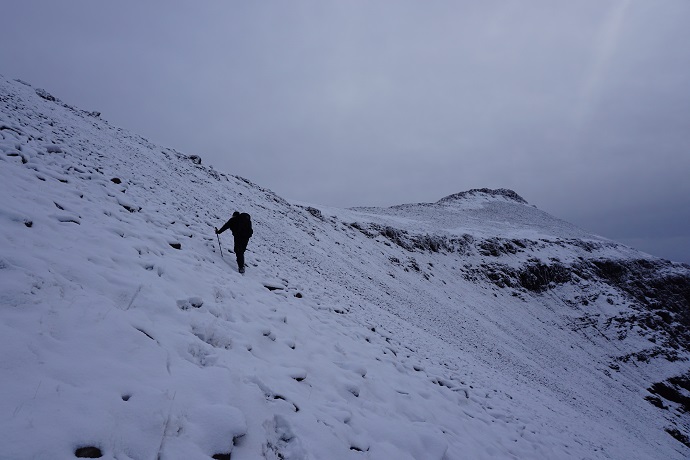 Steep line up to the more gentle shoulder of RSM 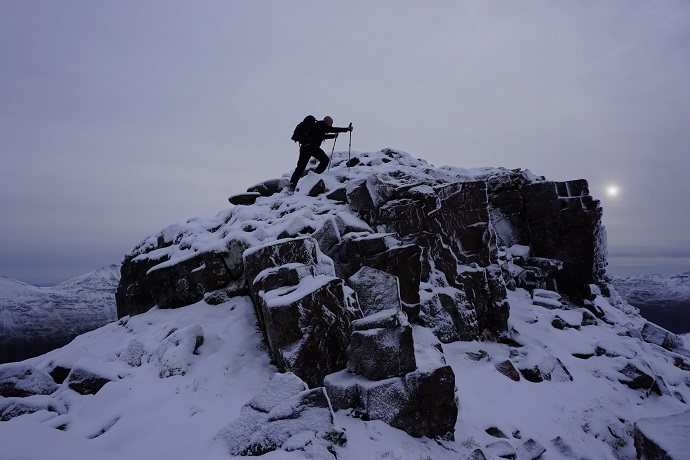 Coming down RSM was a bit more slow and careful due to slippery, snow-covered boulders. We stopped for a quick bite at the bealach then slowly plodded onwards and upwards

By the time we reached our final summit we'd already decided not to return the same way, but to make a loop off the hill and back to the other end of the causeway... just in case it was the water crossings slowing us down 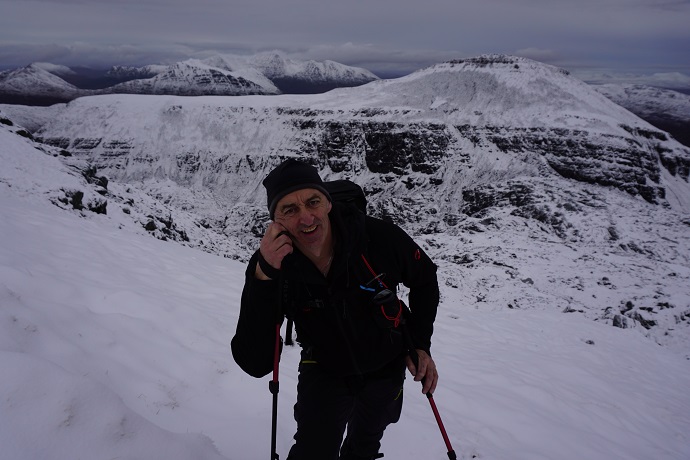 Feeling the burn! Final climb with RSM in the background 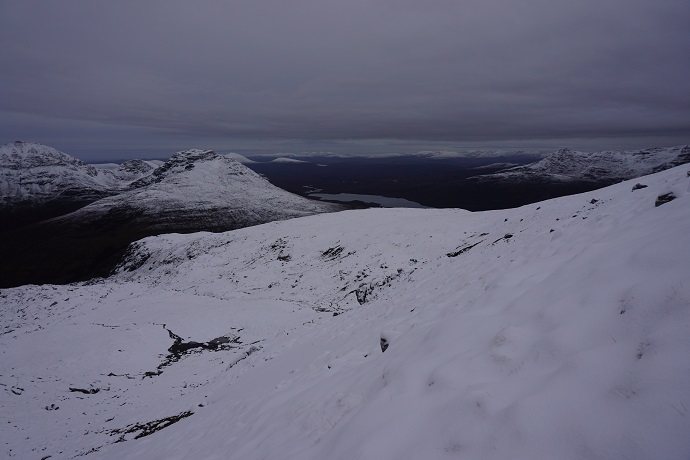 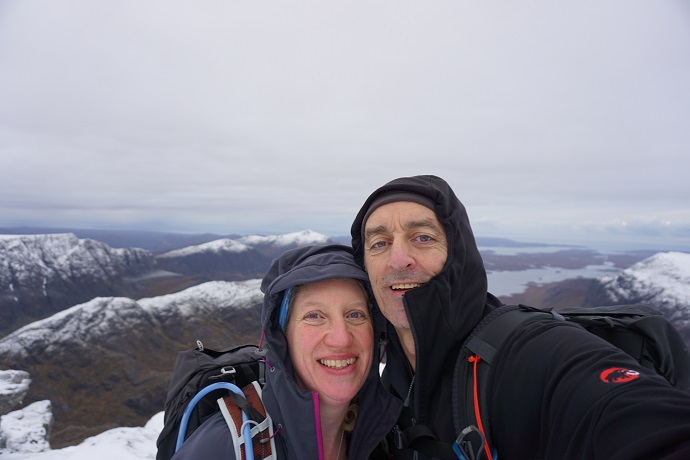 Topped out! Munro round 2 compleated on A'Mhaighdean :) 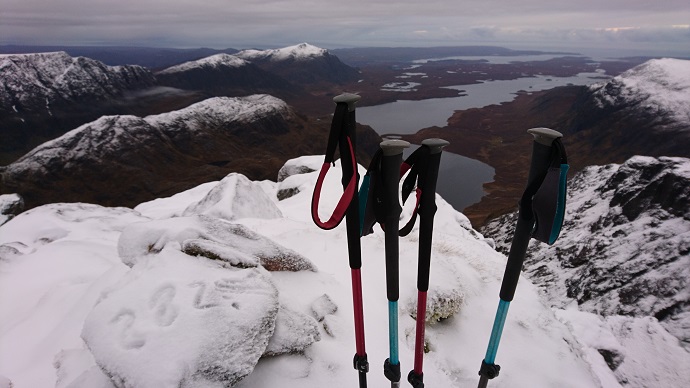 Woohoo! Quick photo stop then time to get going again

We were keen to get back to the track in daylight, which we just managed

Didn't bother to change boots again for the long walk out, happier to just trudge through the obstacles

This time we crossed the burn at Strathan Buidhe, which was surprisingly low by now. Delighted when we reached the bikes again, but even more buzzing when we arrived back at the van at 9pm 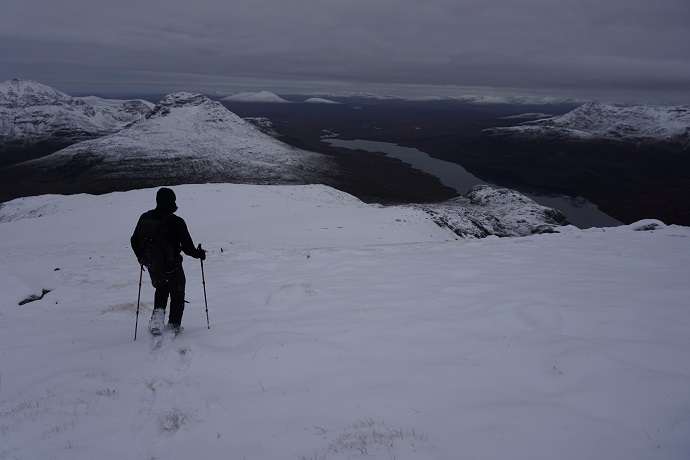 Heading down A'Mhaighdean avoiding the crags 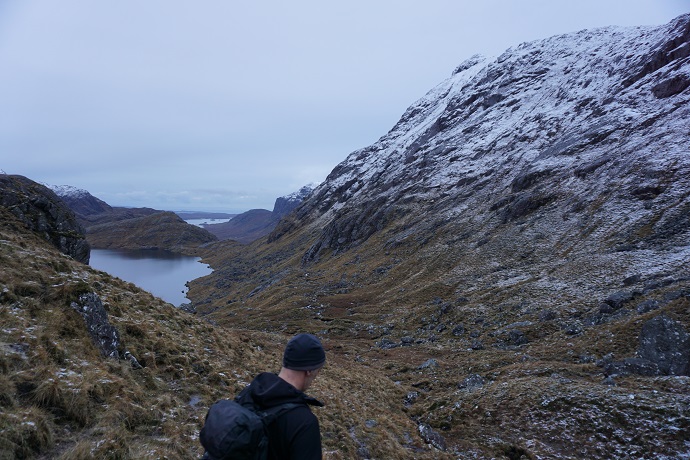 Gorm Loch Mor first, then down to Dubh Loch

As with our first round, this isn't the end of the road for us... we'll still be out hill walking somewhere more weeks than not, since this is one of our favourite hobbies/obsession

Congratulations to you both

Can't believe that I've missed another one of your compleations- mibbe manage along to your 3rd.

Hopefully my wee tips on the cycle/walk in helped??

Your photo's make it look like the water level submerged the causeway? surely not ?

How many pairs of boots is that

Nice! You did it then. Congratulations.

pollyh33 wrote:...Can't believe that I've missed another one of your compleations- mibbe manage along to your 3rd.

Determination won out over exhaustion

Yep, fingers crossed for the next one - we'll give you plenty of warning

Dunblane Bagger wrote:...Hopefully my wee tips on the cycle/walk in helped??

Your photo's make it look like the water level submerged the causeway? surely not ?

Scoob's video shows the causeway crossing better; we used the stones on the side to cross where it was past ankle-deep

How many pairs of boots is that

Thanks! Lost count, but this was the first trip we'd carried an extra pair

Thanks Gill! This one really pushed us; could have done with building up the bigger walks again leading up to this trip

That's what people will be saying to us soon Gammy!

Many congratulations to both of you

- that was some walk with which to finish your second round ! - cheers

That's what people will be saying to us soon Gammy!

. And you probably got the best Christmas Day weather anywhere in the UK as well! Quite some effort to do this (4:30 am start

) but looked well worth it. Congratulations on your second round

Brilliant! What a Christmas Day! Congratulations.

Enjoyed the video - Paradise indeed , its Gods own country up there

Congratulations on compleating round 2 - what a way to finish and on an excellent choice of hills!

Top
28 people think this report is great. Register or Login free to be able to rate and comment on reports (as well as access 1:25000 mapping).