Well, had made a failed attempt at this ridge in October, with the family. Likely just as well as my wife and daughter would not have enjoyed all the little ups and downs etc.
Weather window favourable and glad did not leave it a day later as unlikely we would have got such a great day.

Plenty of walk reports on this hill but, noting that the only other folks on the hill - two chaps walking together and a group of four younger folks - also took the ascent the same way as us, much better to consider this than the WH route.

First, if you drive up the hill, there is a small parking lot behind a bus stop just after the turn off for the school. That cuts a bit off the start (although if you do the circuit including the forestry, you'll have to slog up the hill at the end).
Second, after chatting to a guy in the ice climbing centre in October, he advised that the second shoulder is much better than the field behind the school - although he did mention a wee bit of scrambling (more on that later).
Third, we planned and out and back to avoid the long walk back along the road with the two dogs, figured it would be much shorter than 15.75km (as you can see from the route map and details, it is a good 3.5km or more shorter) and accept a bit more ascent (hence the 1662m ascent total from the GPS).

So, off we went, started at 10am, had been pretty cold so expected little bog and packed crampons in case icy higher up. In the end only one of our group of 3 used hers and even then only for about 30mins, after the first summit. The scrambling was manageable without crampons although they would def be needed if icier.
This shoulder looks quite imposing and indeed the scrambling is pretty decent in places. The smaller dog was totally unimpressed and had to be lifted up a few times. First decision was that we could not retrace our steps on the descent, would also have been tricky for humans in the conditions (as advised by our experienced winter climber). Always knew we had the other bale out option to bring us back into the school field and that's what we ended up doing.
So, follow the track past the farm, through a double gate then, after a few hundred metres, just on the other side of another gate (which was open), there is a small cairn on the RHS of the farm track. Turn right and basically follow a little path that takes you onto the shoulder.
It's fairly hard work pretty quickly, which is great for gaining ascent. The scrambling only really kicks in after 500m or so and there are three or four sections requiring a little care. Not much in the way of opt out paths at this time of year.
The first point of the ascent after the scramble gets you to about 850m. There is then an ascent to a top at about 925m before a bit of up and down to Meall Dearg. Worth noting that the WH ascent bring you onto the main ridge between the 850m point and the 925m top - that's where we came back off. Path off is pretty straightforward, keeping you on the LHS ( west side) of the rock outcrops - downwards that is. You follow that and a few cairns to the end of the shoulder before a path cuts back around to the east and above the school (see gpx file).
Wee bit of down and up to get to Meall Dearg, lovely hill, great views !

So, the bealach between Meall Dearg and the second munro is a drop of about 250m and that bealach is where you head down to the forestry section as per the WH walk. If you do the out and back that's where most of the extra ascent comes in.
We left our rucksacks at the bealach and zoomed up the to the second prize of the day, cracking views again, a bit rocky near the top and a couple of wee bits where care required but nothing to bother the dogs by now after the earlier hard work !

Back we went (was about 5.6km or so to the top of the second Munro which means the return trip was 0.6km longer) with still almost no wind and lovely views.
Ballachulish remains a bastion of Scottish hospitality. The chippie up the hill only opens at 4.30pm and the cafe in the Tourist Centre closes at 4pm but the stop serving at 3.30pm. Perfect when you get off the hill at 3.45pm. Thankfully the Arts/Crafts cafe just before Glencoe Village was open for a bowl of soup and caffeine hit before the drive back to Edinburgh.
The half (or 5/8) moon on the way back into Glencoe was worth stopping for ! reflections of hills on far side of loch 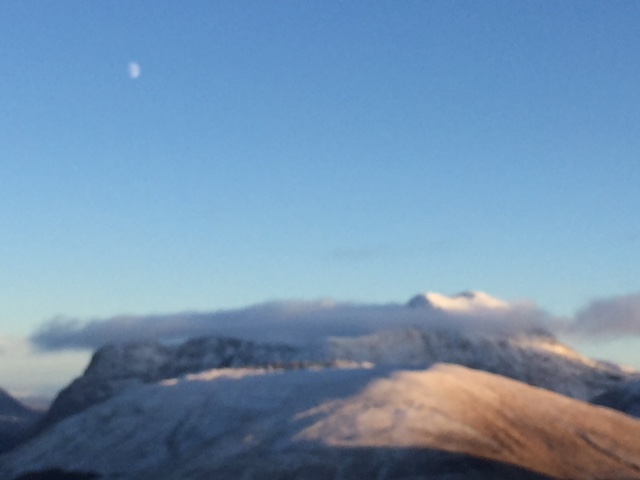 awesome view across to moon over tops above cloud this is the shoulder to head up, you can almost see where the scrambles are on our way up Move_2017_12_28_09_58_55_Trekking.gpx Open full screen  NB: Walkhighlands is not responsible for the accuracy of gpx files in users posts

Nice one, David. You certainly picked a very fine day for your walk.

I did these at the end of November, and chose a rather obtuse route that involved hacking through forestry...

Your route certainly looks better, and the scrambling will have livened things up, no doubt

. Good set of instructions for other to follow, too

Alteknacker wrote:Nice one, David. You certainly picked a very fine day for your walk.

I did these at the end of November, and chose a rather obtuse route that involved hacking through forestry...

Your route certainly looks better, and the scrambling will have livened things up, no doubt

. Good set of instructions for other to follow, too

Thanks AK, good to see you are still getting up here, not sure why about the photos but I now see that as well

When full, apparently that moon is known as the "Wolf Moon" and is the largest looking we will get all 2018.

Good stuff, even harder when the ridge is on its side

Schoolhouse ridge is a fantastic way up a mountain, well within most winter walkers capabilities, with the gear, great to see you, and the youngsters, getting up there. Not surprised the wee dog struggled, might have been easier to fire him up the steep bits with a catapult!

We saw bugger all from the top. Not even the ridge we were walking on!!!! My second proper white out...