We’re in Aberfeldy for the school holiday week and I've been "given permission" for 4 days of walking in the hills provided I'm back by mid/late afternoon each day. This is day 1 and I set off walking somewhat later than usual. The forecast was for dry weather but low cloud which ended up dominating much of the day. Given the stalking season restrictions, I had to walk this group of hills on a Sunday when they take a break from hunting the stags.

GPX of my track is below which I've truncated because of the number of waypoints.

CMhor_CMairg_MeallG_CarnG_activelog 10oct2010 trunc.gpx Open full screen  NB: Walkhighlands is not responsible for the accuracy of gpx files in users posts

Parked the car just below the telephone box at Invervar where there’s space for several cars, crossed the road and started the walk up through the woods on a good track. Not long after exiting the trees, I left the main track and headed ENE towards Beinn na Creige and then on to Creag Mhor (Meall na Aighean on the map). I had decided to walk in an anti clockwise direction as the wind was getting up, likely to be strong higher up and I thought it would be slightly better with it more behind/to my side than head on.

The walk up Creag Mhor was fairly straightforward although I kept losing and regaining the track. There seemed to be lots of wee tracks and it was fairly easy to start on one only to find that I needed to change direction to keep on my line to Creag Mhor.

There are some nice views west along Glen Lyon but by now the mist and low cloud were getting worse and I couldn’t see the views clearly. Looking northward to Meall a Bharr (between Carn Mairg and Meall Garbh) I could see even more mist coming down (had to stop to put on more clothes as it was also getting noticeably colder as the wind rose). The last part of the approach to Creag Mhor was not difficult except for the fact that by this time I couldn’t see much around me. Suddenly looming out of the mist was the rocky top of the hill which is almost like a crown of rocks topped off with a cairn. Stopped for a short time to take the obligatory photos (of the mist) and recharge the batteries before going on to Carn Mairg. By now I could hardly see anything at all - I think I’d still be wandering the hills if it wasn’t for my gps/map/compass. I followed various tracks to maintain my line before finding an old dry stone wall which I followed up over some very rocky ground to the second summit of the day. The rocks can be slippy in misty wet weather. It was still misty, cold and very windy so I didn’t stop long before heading off for Meall a Bharr en route to Meall Garbh. There’s a broken line of old rusty fence posts which were more or less along the same line I had planned and these helped greatly in the misty conditions. Once or twice the mist cleared a wee bit and I could see slightly more - I even saw a bit of blue sky and very hazy sun but they disappeared very quickly. The fence posts are rather ugly but do form some strange, eerie shapes in the mist. It would normally have been easy going to Meall Garbh but the low mist and cloud and the very strong winds made the going a bit harder - at times I was walking at an angle and almost not able to keep moving because of the wind. Instead of the usual cairn at the top of Meall Garbh there’s a cone shaped pile of rusty fence posts which looks almost like something out of a horror film as it looms out of the mist. However, it does give some shelter and I stopped for lunch on the westerly side of the “cairn”. Then it was on, via An Sgorr, to Carn Gorm , the fourth and last hill of the day. Still I couldn’t see anything and the wind was whipping across my face making breathing harder, freezing my nose and watering my eyes - on the plus side, the rain had stayed off. It was fairly easy going to the summit of Carn Gorm which oddly enough had a small ring of rocks inside which was the trig point on its side. From here the going is straightforward ESE towards the trees. At long last, I was able to see some of the hills as I came down below the cloud line. On reaching the trees, you can see the main track and the remains of some sheilings on the other side of the Invervar Burn. There’s an old bridge over the burn at this point with views down the glen. 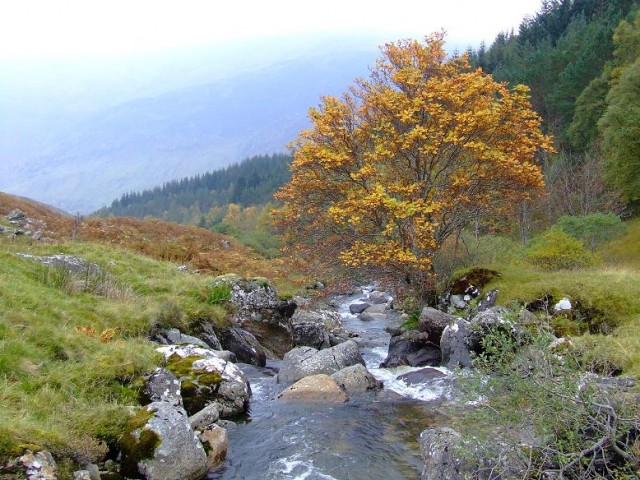 It’s then a straightforward walk back down the main track to the car park.

Yeah I'm not sure I'd like to navigate that round on map and compass - and as I forgot the map the day me and Richard did it, it's a good job we got a clear day for a change! What on earth's happened to that trig point? It was stood up when we saw it last year!

Done this walk yesterday Rockhopper with perfect conditions .It;s a pity about the weather you faced because this walk does offer some great views on a clear day

Totally agree pigeon - unfortunately we were leaving Aberfeldy on Saturday to go home and I couldn't believe the weather in the morning as it was probably the best it had been all week at that time. Still we managed to walk round the Birks of Aberfeldy in the sunshine before finally leaving for home

Did this walk a couple of days ago, clockwise direction. apart from strong winds and a wee blizzard that blew past just around the 3rd peak, weather was great, clear, smashing views. The strange left over old fence posts seem so out of place but can see in other peoples pics of the snow,,how they would help in navigation.

This site shows the ascent as just over 1300 mtrs,, bit of a slog at times but great nipping across between the peaks, FAB!