Sunday, 1st. April, 1984:
My good friend Jon and I had brought a group of students up from the south of England on the previous day for a week of winter skills instruction and an early start saw us heading up into Coire na Tulaich in brilliant weather. A north east facing slope towards the top end of the corrie provided a good location to teach the basics of step cutting, self arrest techniques, different types of snow belay and digging avalanche pits before we moved on to the head of the corrie and then the summit later in the afternoon. It was my first trip to Glencoe in the winter and the views were above average! 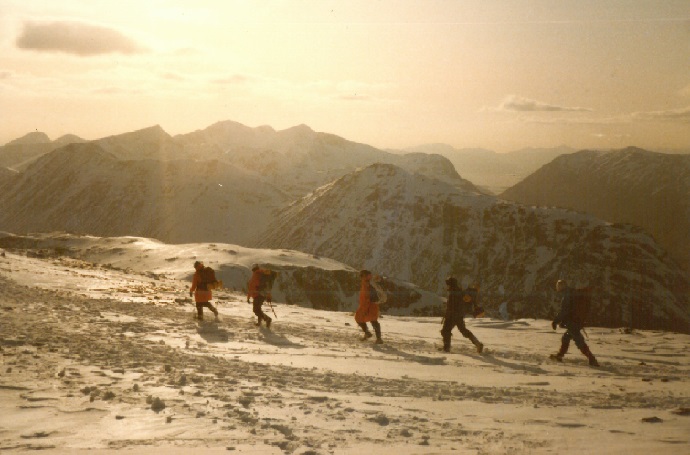 
our_route.gpx Open full screen  NB: Walkhighlands is not responsible for the accuracy of gpx files in users posts
Postscript: An extra Munro (08.01.1985.) Jon and I were back in Glencoe running a similar course less than a year later - in January, 1985 - and, after a similar introductory day elsewhere, we climbed Stob Dearg again with a bunch of students and decided to take in the rest of the ridge which, at that time, consisted of a relatively unfrequented series of Munro tops. Jon himself didn't come with us as he'd been over-dosed on laxatives by mischievous students on the previous evening so, while he headed for the valley, I took the rest of the group along the ridge for a grand day out, inadvertently earning myself the additional tick of Stob na Broige which gained full Munro status in 1997. Users browsing this forum: past my sell by date and 61 guests