Schiehallion from the North

Schiehallion from the North

g21.gpx Open full screen  NB: Walkhighlands is not responsible for the accuracy of gpx files in users posts
I thought I’d like to tackle Schiehallion by a different route than the usual tourist track on this popular hill and try to find some snow sport to boot, so hit upon an ascent from the north. The map contours are closely spaced and show boulder strewn slopes, an accurate representation but as it turned out it didn’t feel as steep as the map suggested. So I drove past the Braes of Foss car park and found verge side parking about 3 km further on opposite the 2 obvious streams and the gate to a convenient old track that headed in the right direction. There were still some good looking snowfields so I was feeling hopeful. 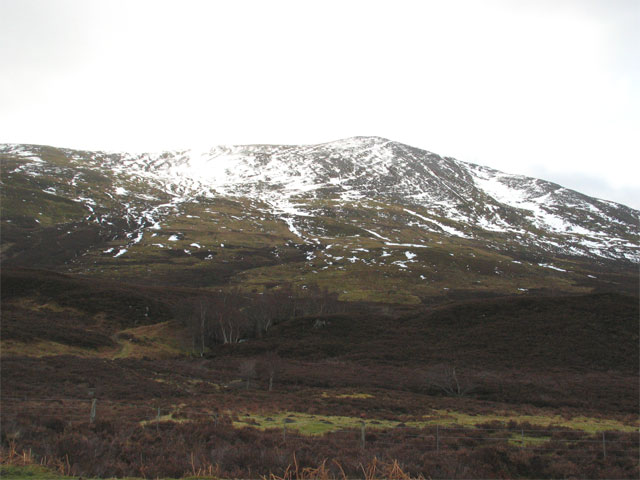 The track leads alongside a stream, past what would be a lovely summer picnic spot where there is a small waterfall and a few birches that have managed to find a foothold out of reach of the sheep. The track peters out before long but the sheep come to the rescue for once and provide useful paths through the heather on these lower slopes. I headed between the 2 streams, the going was fairly good with just a few boggy patches. There is a solitary tree, a Scots Pine I think, that has somehow survived here and with the earlier birches are the only trees close by. 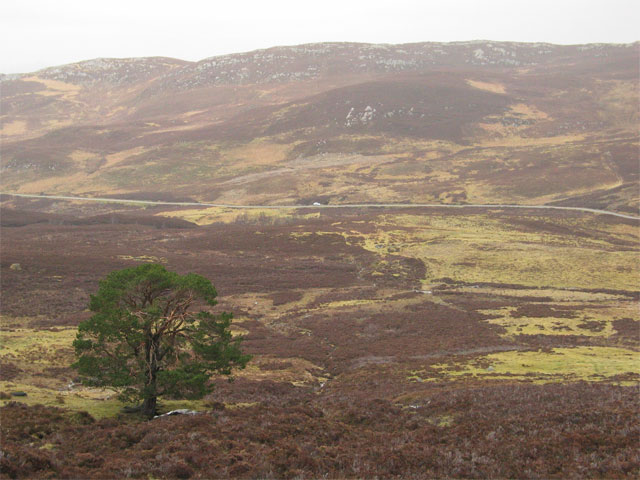 trail of the lonesome pine?

There was no wind and there was a bit of sun so I had to strip off to keep cool. As I got closer to the steeper slopes I planned my route through the snow fields, looking for a line that would join the patches and keep me safe. I chose a route that would bring me a little to the east of the summit and aimed for the snow at the start of the route. Once there, as expected I found the snow to be soft so crampons weren’t required, I stopped to get the ice axe out and to have some food. Sorry, no soup today! Views not bad but a bit hazy today. 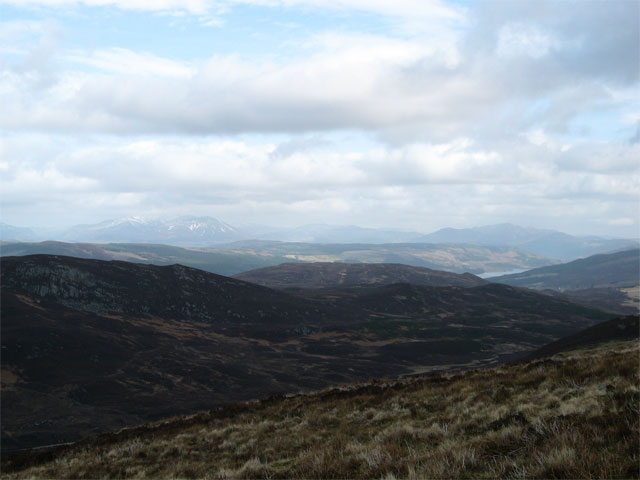 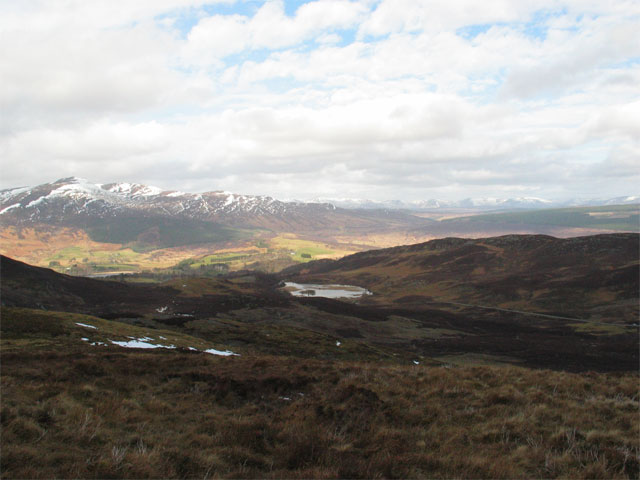 Warm gear back on and I set off. The going was mostly good, step kicking in the snow and not going in too deep. I varied this by sometimes going over turf and rock sections and using the pick of the axe at every opportunity, the turf still being quite firm. I soon found that the rocks are loose so that added to the challenge and this whole section of the ascent was very entertaining. 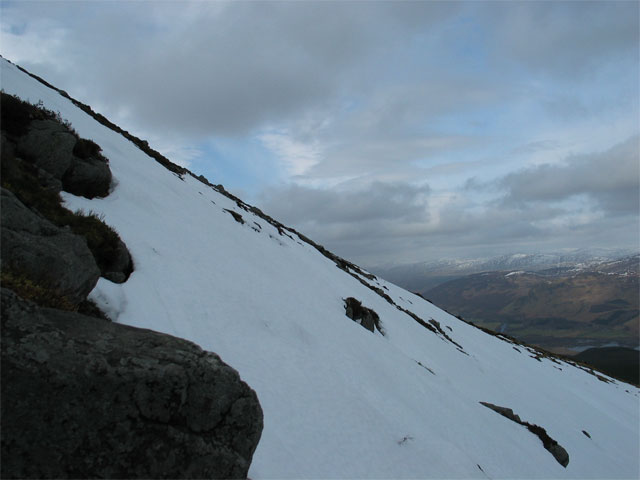 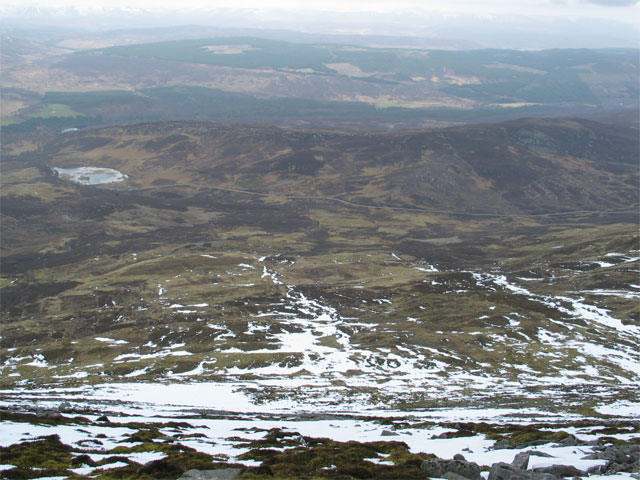 The summit ridge is over the brow of the hill unseen of course, by now cloud had lowered to just below the summit so I couldn’t see how far I had still to go. As the slope eased the snow became deeper and softer. There was an element of crust that wouldn’t quite take my weight and coupled with deeper patches between boulders gave a frustrating flounder on the final section. I reached the ridge top, which surprisingly still had a good covering of snow, and made my way west to the summit. No views though, cloud lowering all the time and some light snow started. I met another walker, we had a chat and admired the little snowman that someone had placed on top of a boulder, the poor thing had been blown over though. 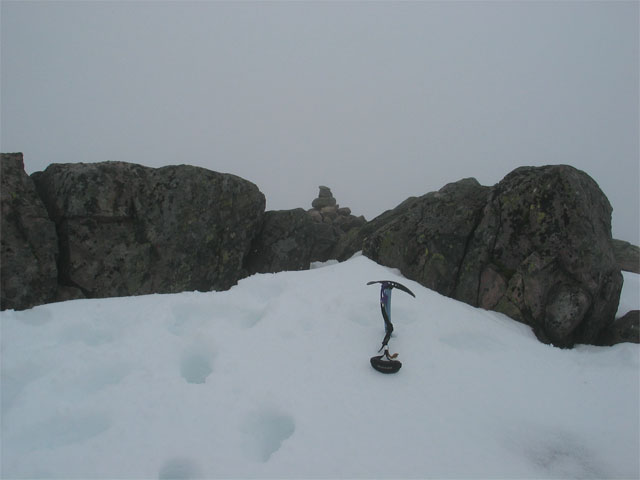 He set off down, after a chocolate bar I followed, this time going a bit further to the east before turning down the slope. Apart from a few unstable boulder patches I was able to plunge the heels into snow for a good distance and came out of the cloud. I saw a lone deer and disturbed a couple of ptarmigan. The poor legs were feeling a bit weak so I had a long stop for more food and drink, that did the trick and I was able to enjoy running for a short while on the easier grassy slope. The onward route was visible all the way down with the car a magnet that I could reach to drive back to base for that beer. Today was just 5km distance and 700m of ascent, a grand quiet spot to be in and a great day out. Oh, and the 6km that this road travels to the east is a driver’s paradise, who needs Top Gear’s road in the Alps?

Re: Schiehallion from the North