On a very windy but dry day we parked at the entrance to a wide track that heads down the north side of Castramount Burn. We followed this down to just before a culvert to the East of a chopped down plantation. If you cross a cattle grid you've gone too far, as we initially did! Up a small slope from the track we found a new gate that lifts and slides open, and climbed over a second wooden fence that doesn't open.

We followed the East bank of the stream that comes down from the North. Much easier than tackling the stumps in the plantation. Just before the col we crossed the barbed wire fence at a point where the barbs had been covered, though this was largely worn away. It may be easier to cross the fence 200m earlier where the top wire is hanging loose. Having crossed the fence it was a short pull up to the summit of White Top of Culreoch marked by a small cairn near an uprooted tree. summit of White Top of Culreoch looking towards Cairnsmore of Fleet

From the summit we re-crossed the fence and followed sheep tracks and a quad bike track round to the summit of Craig of Grobdale. There was an obvious quad-bike track that took us back down to the fence and gate combo that we crossed earlier.

We returned up the wide track to the car. The intention had been to 'bag and go' and move the car a mile or so down the road and climb Bengray from near Lagreath. However the lumpy terrain between the two Marilyns looked interesting, so we climbed directly from the car on to the tump of Fell of Laghead. This gave an excellent view back to White Top of Culreoch. The climb was straightforward through mostly short grass and heather.

We then climbed another Tump, Craigtype, which provided an excellent onward view across Loch Winyeon to Bengray. The going remained good. 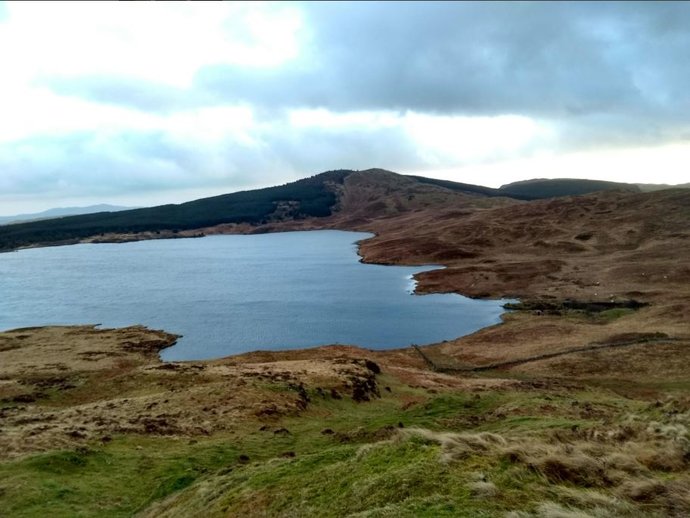 We then dropped down, initially steeply to the shore of Loch Winyeon. We climbed over a locked gate, rounded the sluice near an old fishing hut and then the going deteriorated rapidly. Tussocks of long grass and heather, boggy in places and a lack of paths, meant this section was a bit of a flog.

It was a relief to reach the bottom of Bengray near where the forest comes down to the Reservoir. We noted that there was a new barbed wire fence, an awkward 4 foot or so high, protecting the forest. There was also a new locked gate that was easy to climb over, not being topped with barbed wire. We decided to cross here, although the going was easier on the West side of the fence, as we did not know how easy it would be to cross the fence higher up.

We climbed steeply close to the fence. The lower part would be difficult when the bracken was up, but no problem on the final day of the year! As we got nearer the summit, we had to struggle through deep heather for a short period. Finally on to the summit of Bengray where the trig point is overtopped by a tussock 80m to the west. We took a deserved rest and late lunch to the lee of the wind, a little east of the trig point.

Not much fancying descending back down by the fence, we headed west across the summit of Bengray, and found the new, gateless fence. At one point rocks and old fence posts had been piled up to ease the clamber over. Even better, a couple of fence posts south, someone had cut the top wire. This made the climb over much simpler and safer. Why oh why can't they install a simple stile when putting up these new fences? It is obvious that people will want to cross at locations such as this and there is unfettered access both sides of the fence.

Now safely across the fence we visited the west top of Bengray, 4 metres lower than the summit, but an excellent viewpoint. From here is was a simple descent, often on quad bike tracks across the tump of Benfadyeon back to the road at Laghead. Note the footpath from Loch Winyeon is indistinct. It does however provide a stile to cross the wall 200m east of the road.

We now walked up the road until it is joined by a wall by a gate. Here we clambered over the wall, immediately crossed the boggy Drumcleugh Burn and made a direct ascent of Castramont Hill. It is unclear whether the OS spot height or the knoll 100m to the west is highest, so worth climbing both. Then we traversed the summit ridge of Castramont Hill on more quad bike tracks, which took us directly back to the car.

Mar_550_White_Top_of_Culreoch_Mar_551_Bengray.gpx Open full screen  NB: Walkhighlands is not responsible for the accuracy of gpx files in users posts