New Year on the wild side

New Year on the wild side

I had booked the first few days of 2018 off with the intention of going bothying somewhere. With the car available, I decided to leave on New Year's day, rather than wait for the train on the 2nd. This opened more options up, but I decided to stick with Strathcarron as my destination, with a couple of nights in either Bearnais, Bendronaig or both bothies


Map1.gpx Open full screen  NB: Walkhighlands is not responsible for the accuracy of gpx files in users posts
Although I like a few drinks on new year's eve, I rarely wake up with a hangover on new year's day these days, so I was raring to go on the 1st. If only I had packed all of my gear up the day before! In the end, I didn't arrive in Achintee until just before 1pm. The weather had been stunning on the drive over, and it was still sunny here....until about 5 minutes after I left the car! 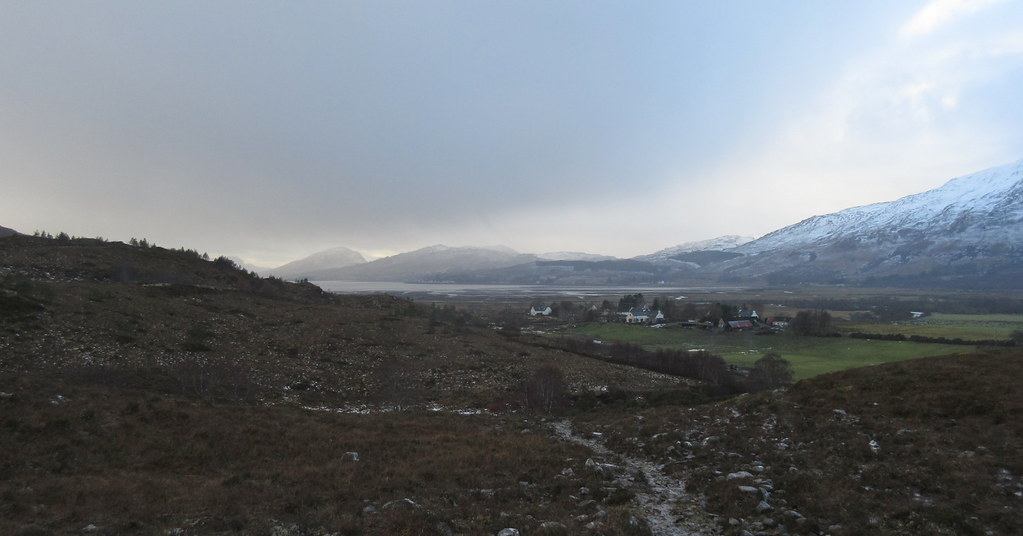 I soon realized that I had over-packed a bit; 10kg of coal, a bag of kindling, loads of food, extra clothes axe and crampons probably took things to over 20kg. I didn't worry too much initially - after all, I was only crossing a pass on a fairly decent path. 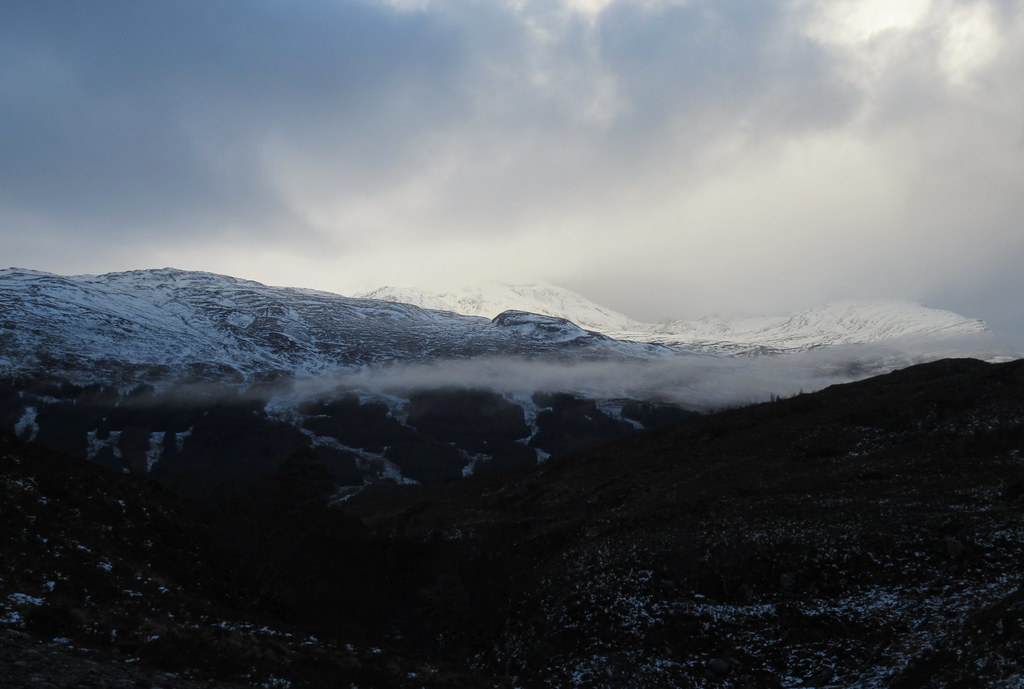 The few drops of rain soon turned into a reasonable shower, although it didn't last too long. The way ahead was eased briefly by a new hydro road. I'm not sure about this scheme - it is neither the best or worst example of how a hydro scheme can look, but the burn that it is on barely has any water in it! 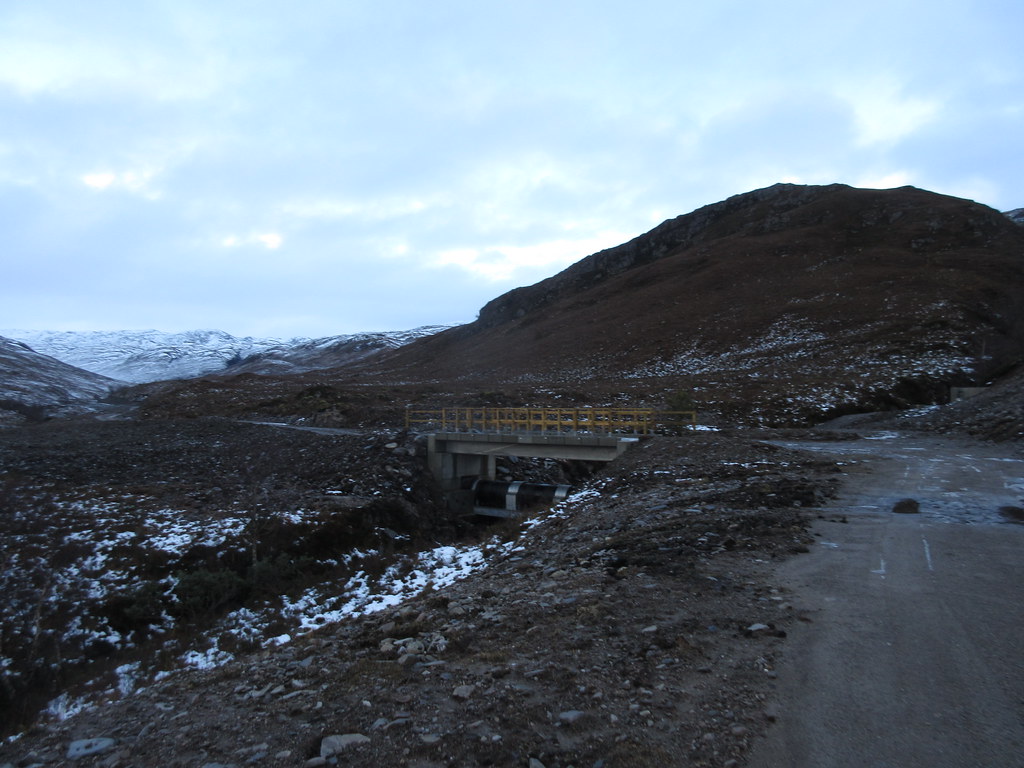 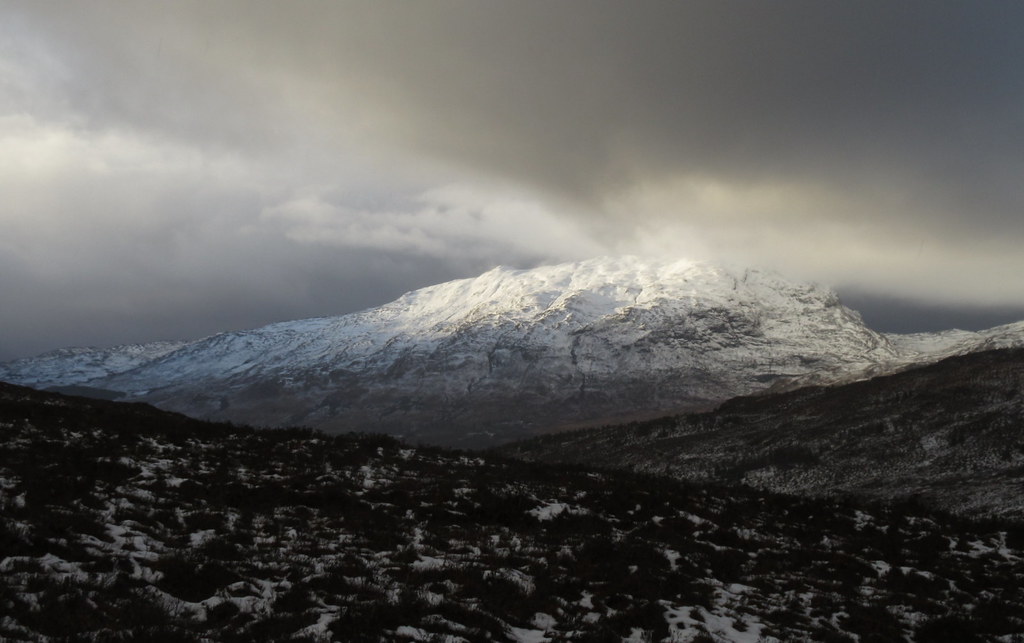 Back on the original path, the showers were sending a drip of sooty coal-juice all over my bag and jacket - not entirely appreciated

. Higher up, the snow was making the going harder, and I briefly wondered whether I would be bothered to make the diversion to Creag Dubh Mor. After stopping for a break, I decided to go for Creag Dubh Mor anyway - after dropping my bag, it felt more like floating up than walking, and a few steep sections of snowy heather put me on the summit in about 20 minutes. I spotted what I thought were a pair of eagles circling on my way up, but were they buzzards? 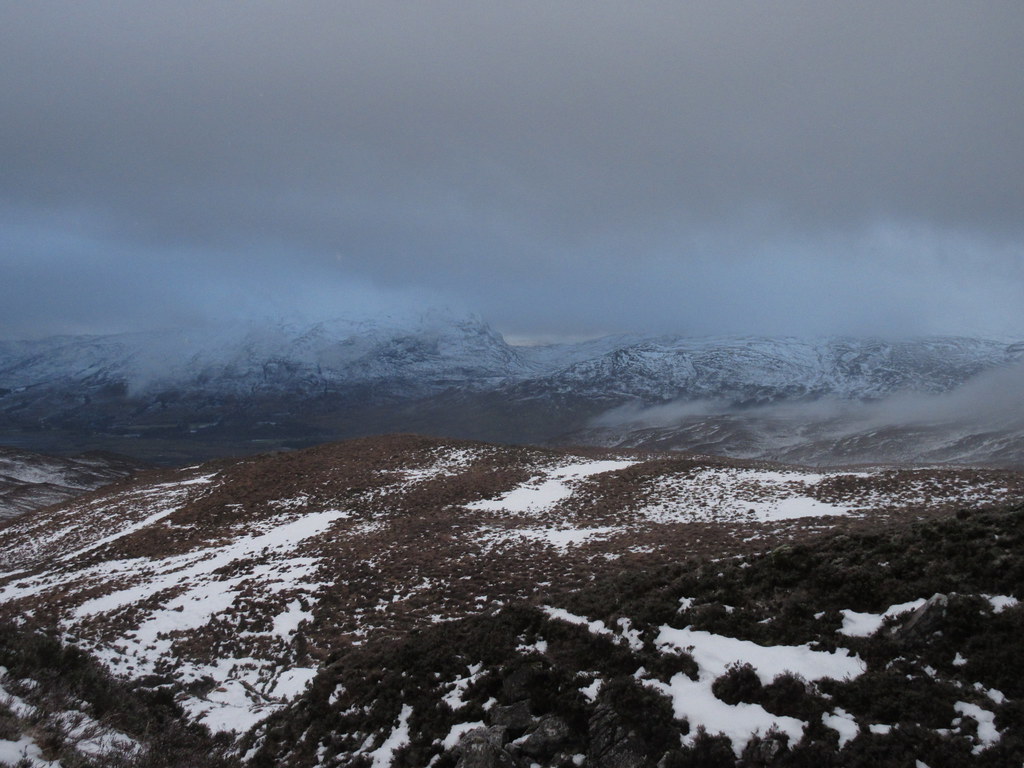 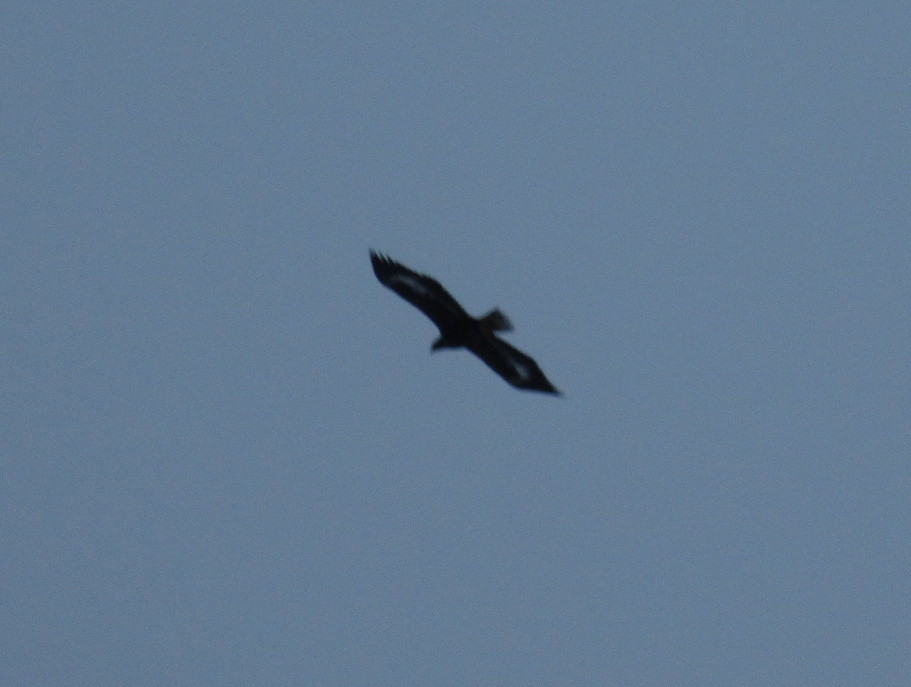 Eagle? It never is, but the white under-wing markings suggest it might be. 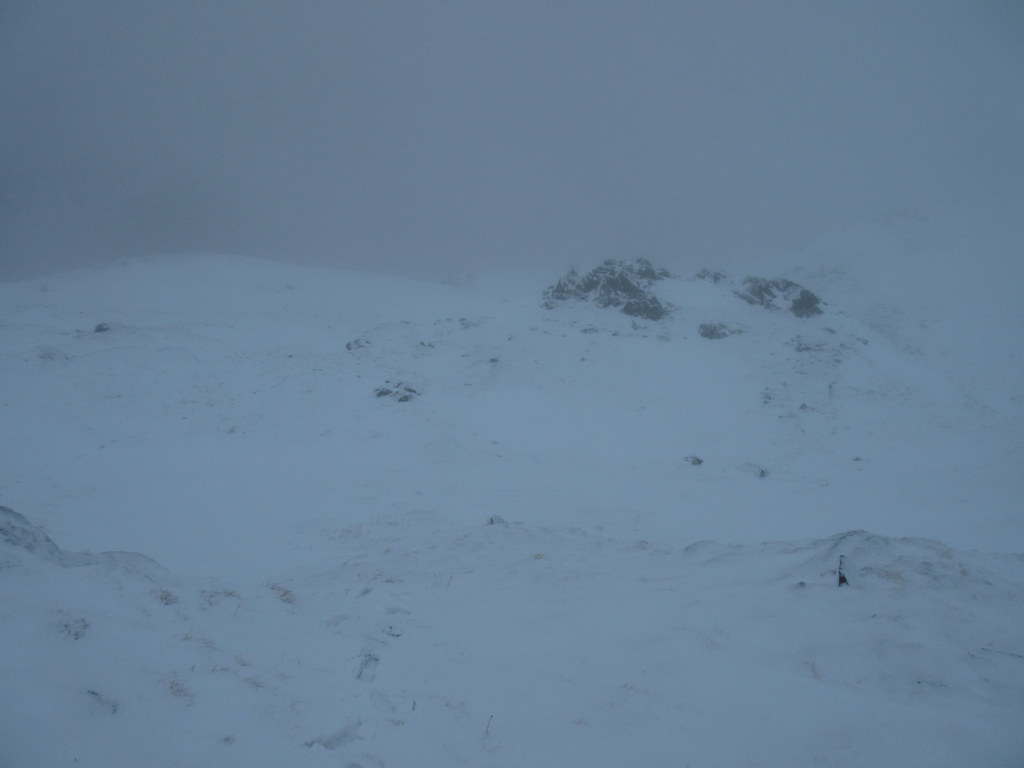 While it felt wintery on the summit, with no views at this particular moment, it was reasonably calm. Back down at my bag again, it was time to continue to Bearnais. With only 40 minutes of daylight left, I had a feeling I'd be arriving in the dark. 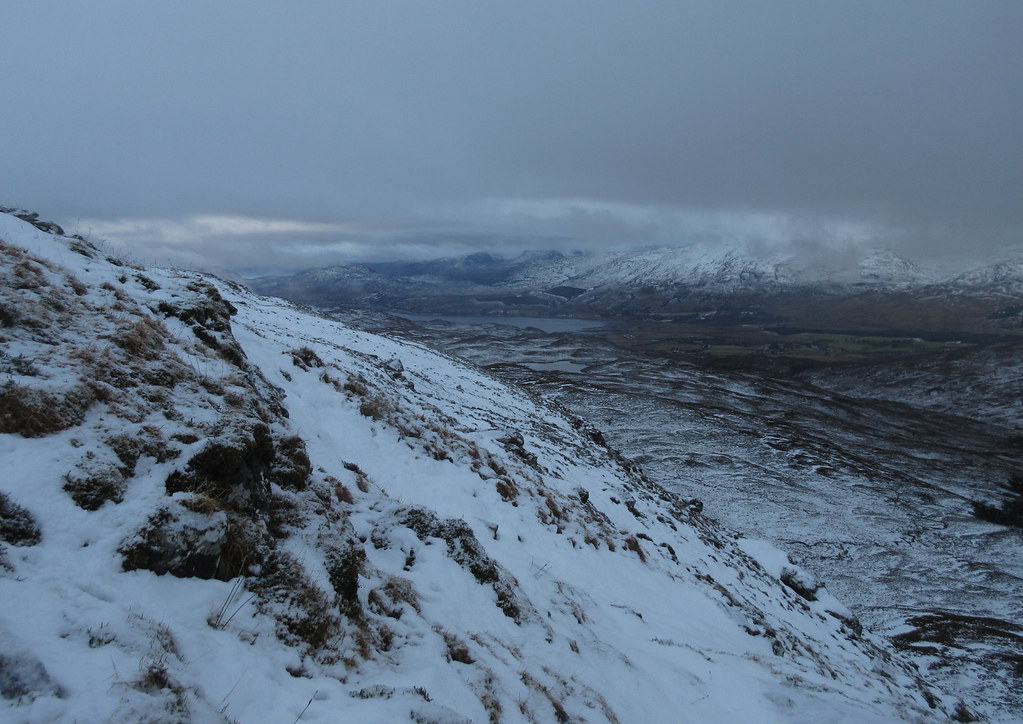 Lochcarron from the descent of Creag Dubh Mor 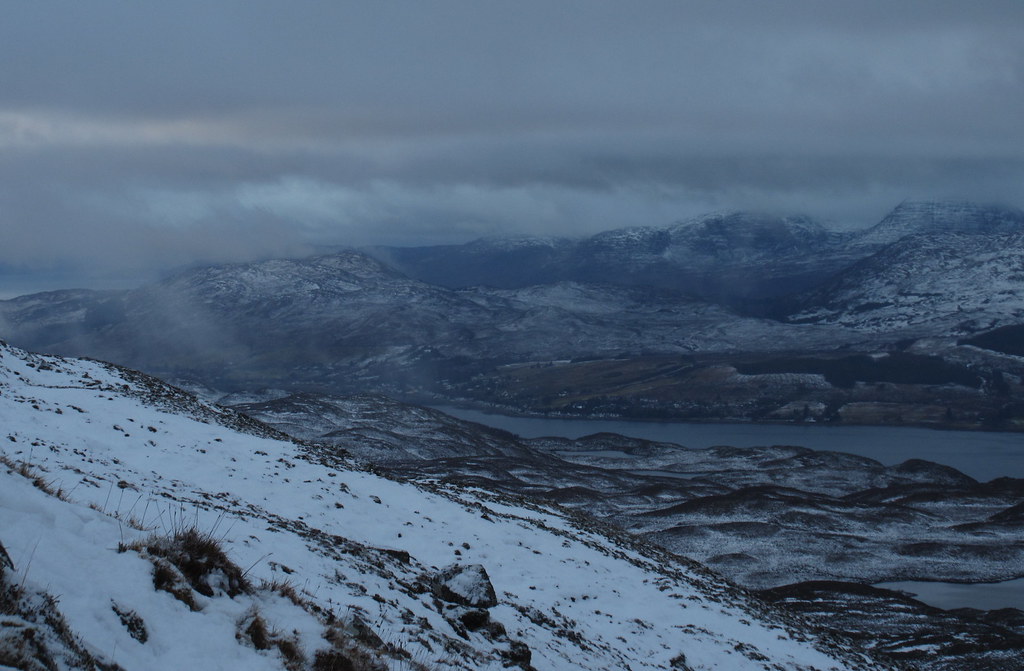 ...with a zoom to the Applecross hills 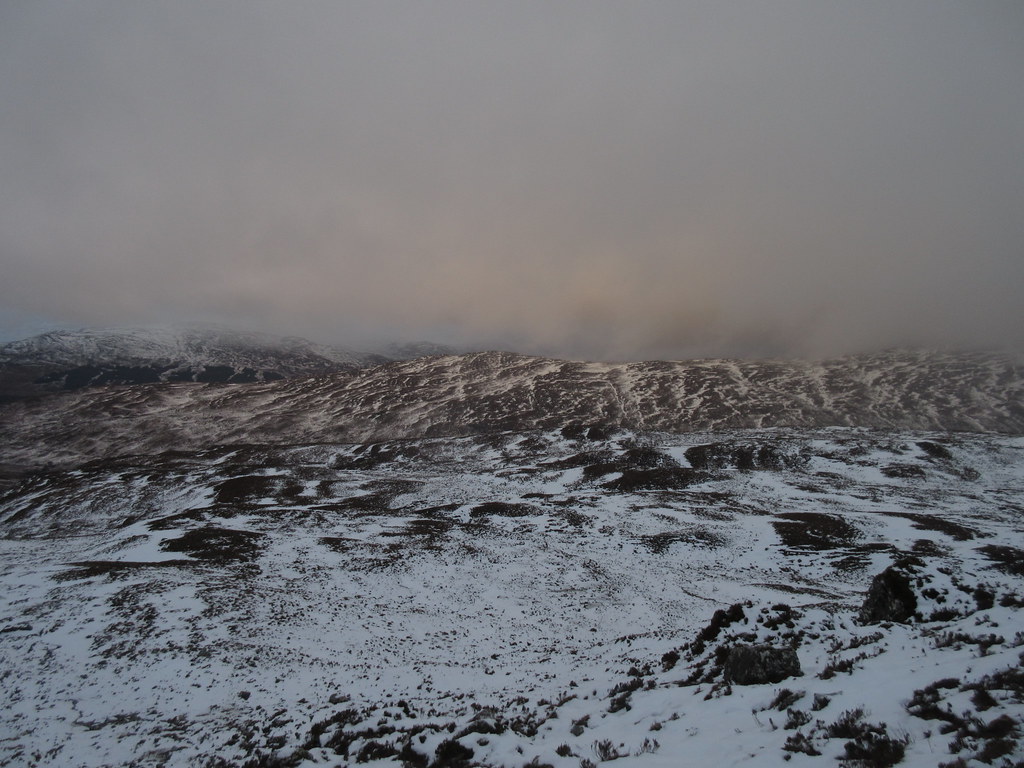 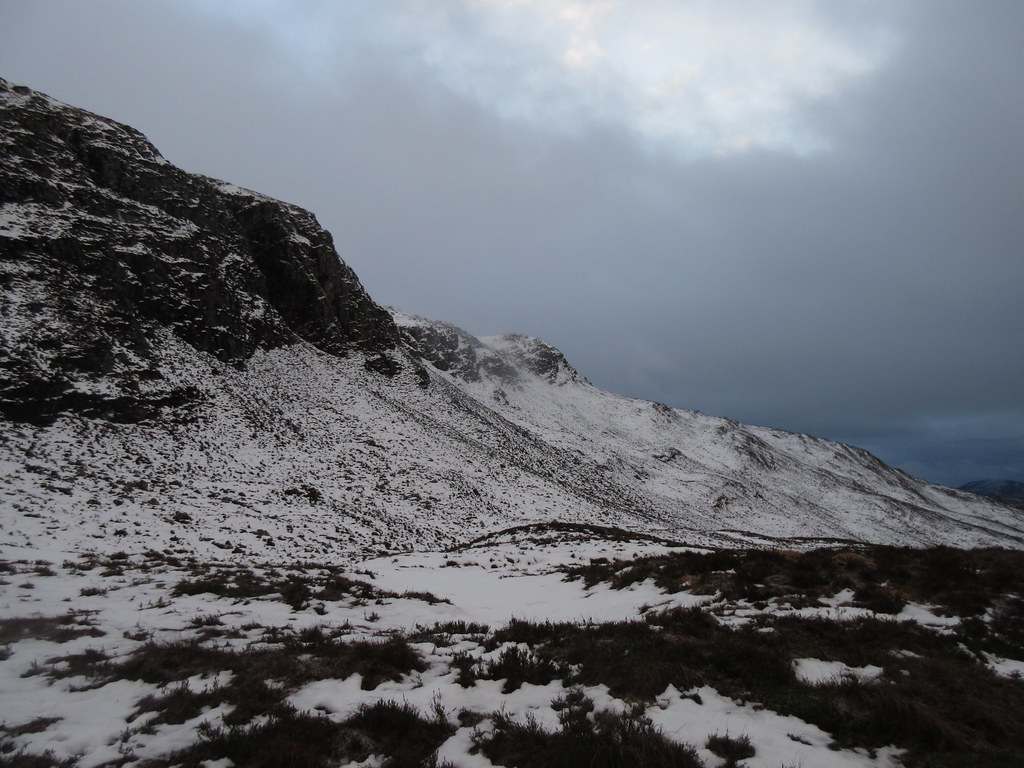 The snow mostly obliterated the path from here onwards, with lots of bog lurking beneath the crust. As I expected, there was a fairly wild area of highish plateau to cross after the high point of the path. I hadn't anticipated that it would be quite so haggy though, with many of the hags buried beneath drifting snow and little sign of the path. This was going to take some time to cross!

After half an hour or so of plunging up to my knees through bog and snow, the light was going but I could finally see Bearnais bothy in the glen below. Even then, it seemed to take an age to get to, mostly down to the tedious weight on my back. I finally rolled in just before 5pm, soaking wet and covered in coal dribble, although it wasn't overly dark with the amount of snow around. 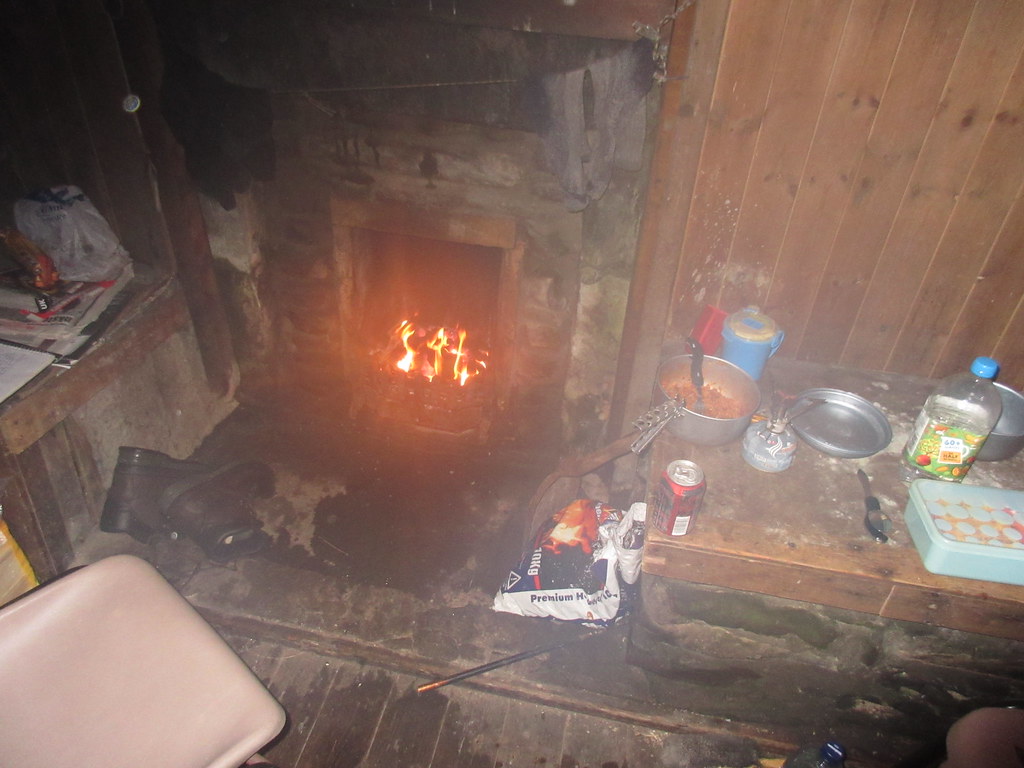 Finally getting warm at the bothy

I didn't have too much problem getting the fire going for a change, but it took a good 90 minutes to feel reasonably warm and dry - no instant gratification here! I had some ambitious plans for the following day, including Bidein a' Choire Sheasgaich, Lurg Mor and perhaps Beinn Dronaig. However I knew the weather probably wasn't good enough for that, and by 7:30pm my fire was dying out after I had already used up half of my coal. So I decided there and then to put some more coal on the fire and forgo the second night out. I wasn't too bothered - at least I'd got out here in the first place! 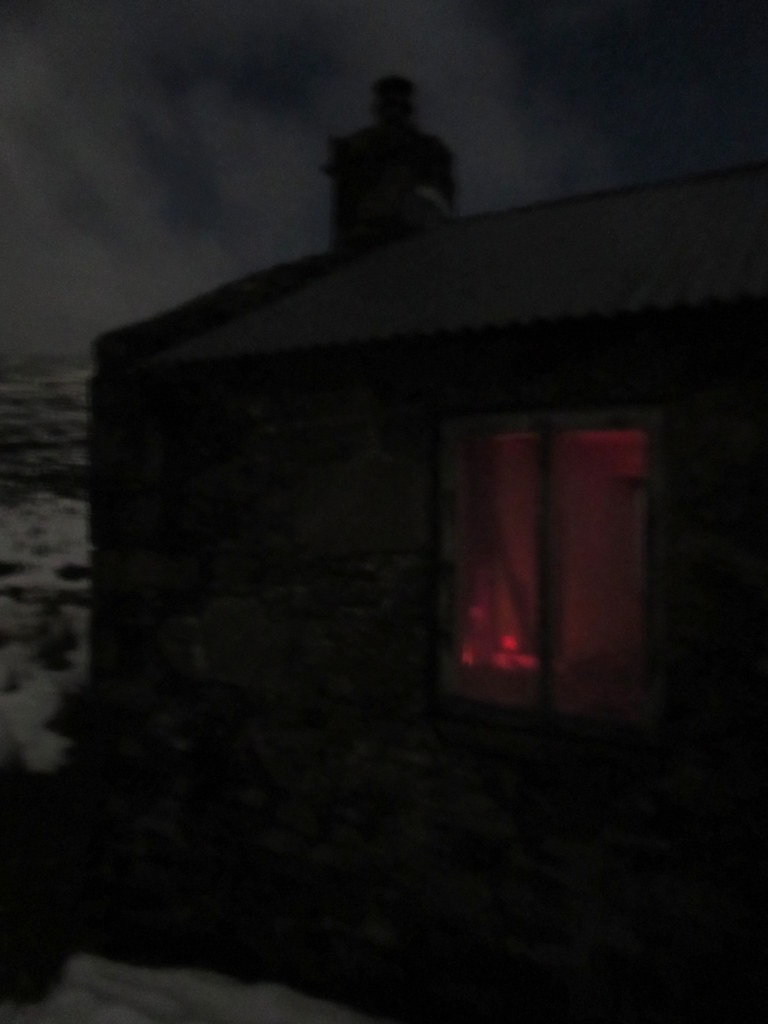 Outside it was still calm, and between showers the moon was almost as bright as daylight. It was worth it just for this

. With another shovel of coal on the fire and another beer, things began to feel cozy. No way I had enough fuel for two comfortable nights though, and I'm sure I do this for pleasure 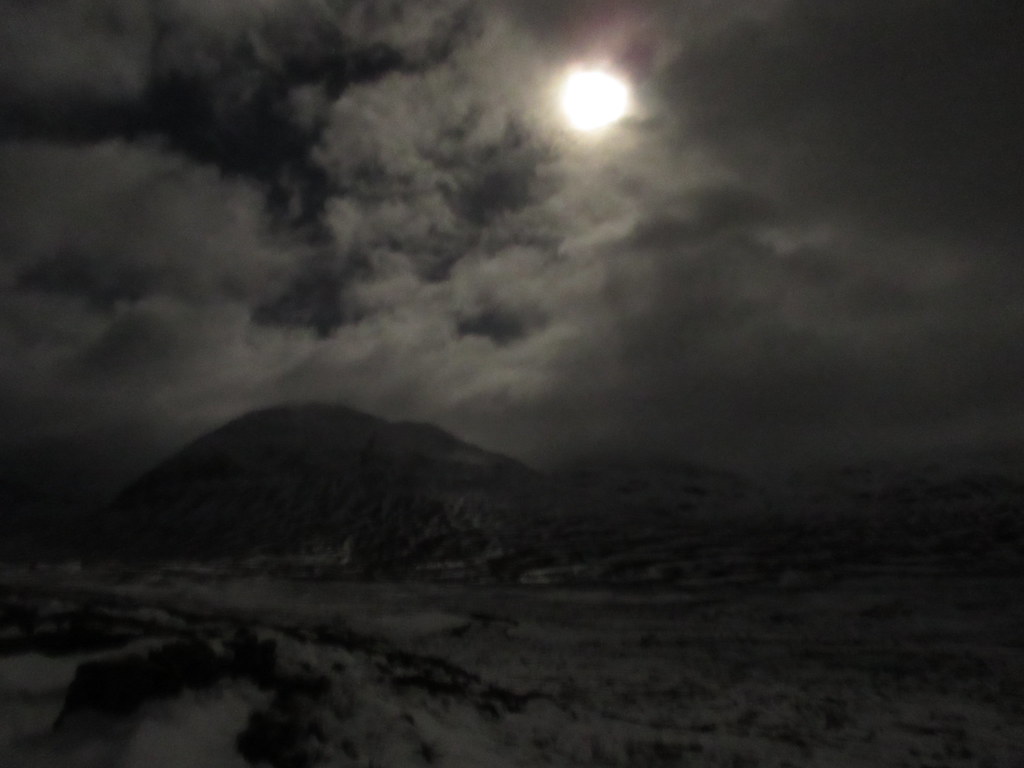 Next morning dawned greyer, but initially it was still quite calm. I always struggle to get out of my sleeping bag in bothies, but I quickly realized that it wasn't as cold as it first felt, and was packed up to go by 10:15am. By now the cloud had come down some more and the wind was getting up, so I decided to leave Beinn Tharsuinn out of my plan and head back to Strathcarron via Sgurr na Feartaig and Eagan.


Map2.gpx Open full screen  NB: Walkhighlands is not responsible for the accuracy of gpx files in users posts 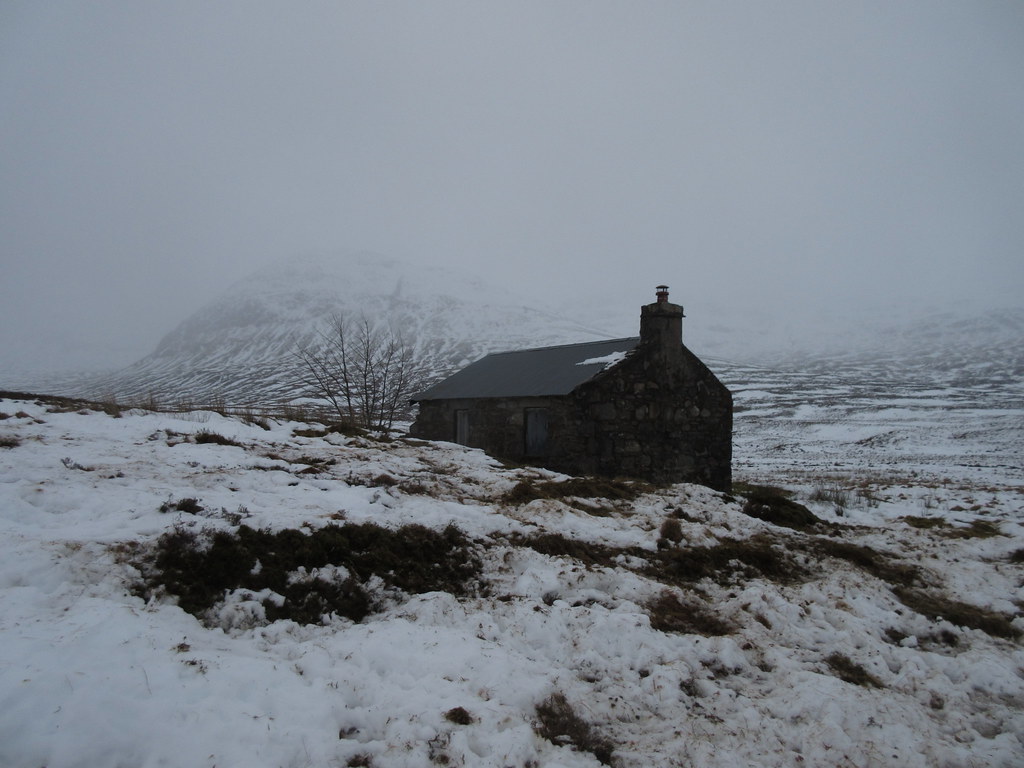 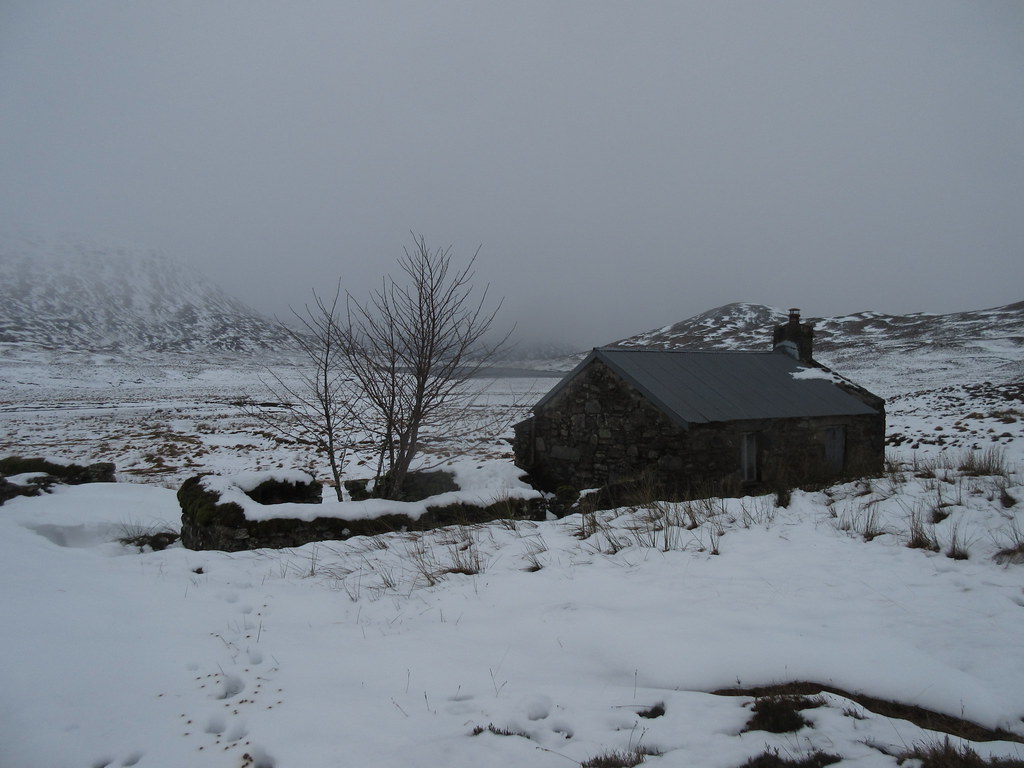 Although my load was a fair bit lighter than yesterday, it was heavy enough and there was still plenty of plunging into deep snow. The wind rose as I got higher, and I thought I'd be in a whiteout on the summit ridge. However, the clag blew away to some extent, and there were intermittent views and even a small amount of sun 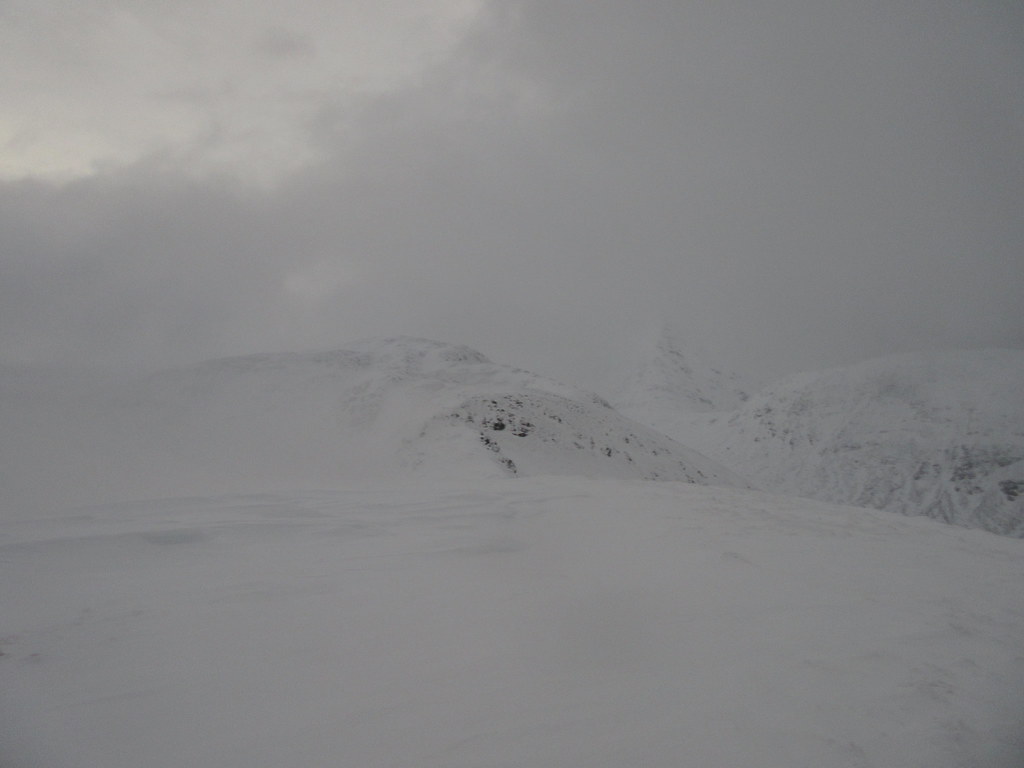 On the west summit of Sgurr na Feartaig

However, by the time I was approaching the 805m summit of Sgurr na Feartaig, the wind was becoming intolerable, and I could barely move in the direction I wanted to. I pushed on over the summit towards the main summit, until I managed to fall into a bog buried beneath a snowdrift on the next low point. Trying to get out of this with the wind blowing me over was quite difficult, and at that point I decided to turn back. To be honest, there had been a number of points where I had already considered turning round, so I wasn't overly disappointed not to make it to the main summit. 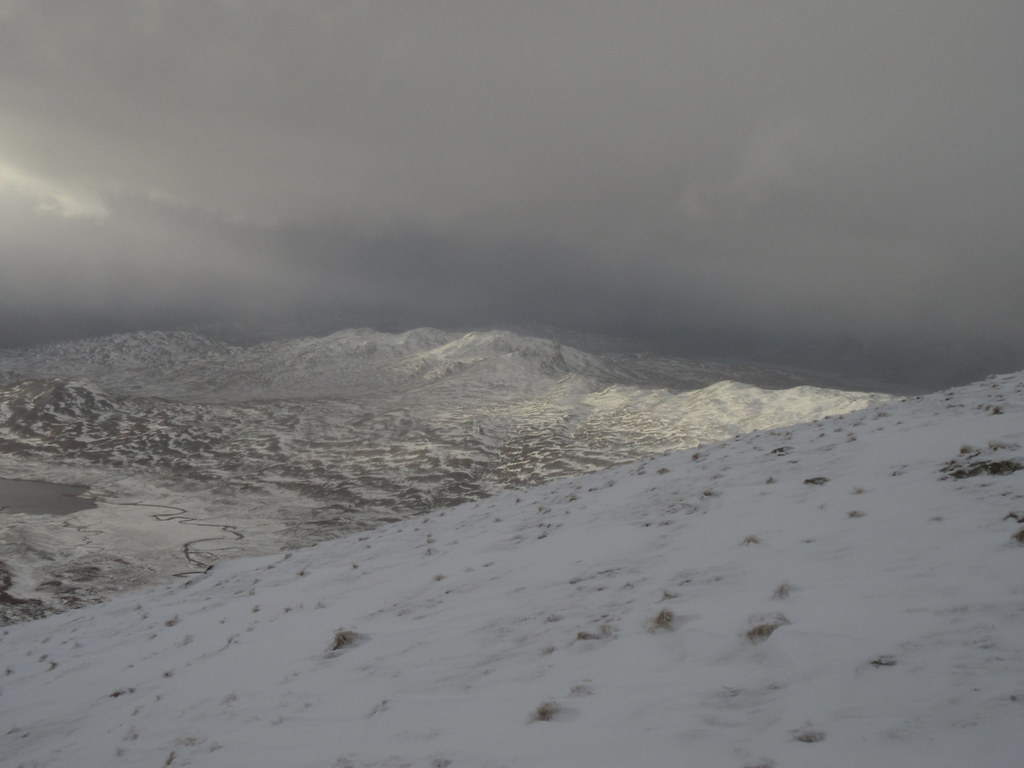 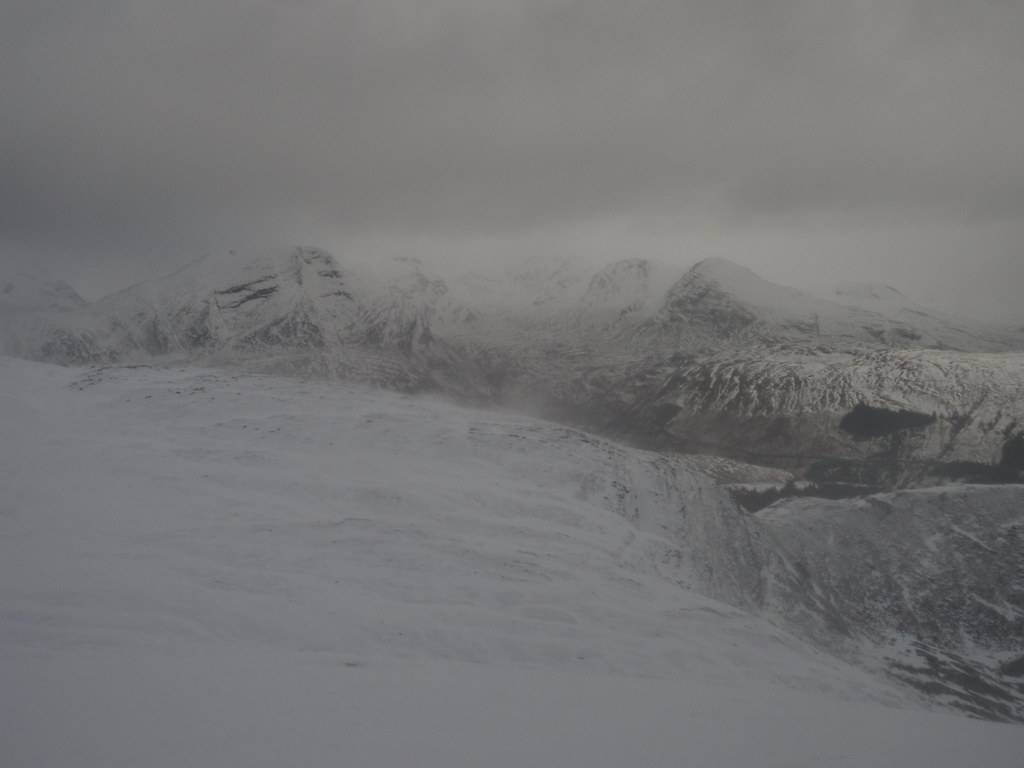 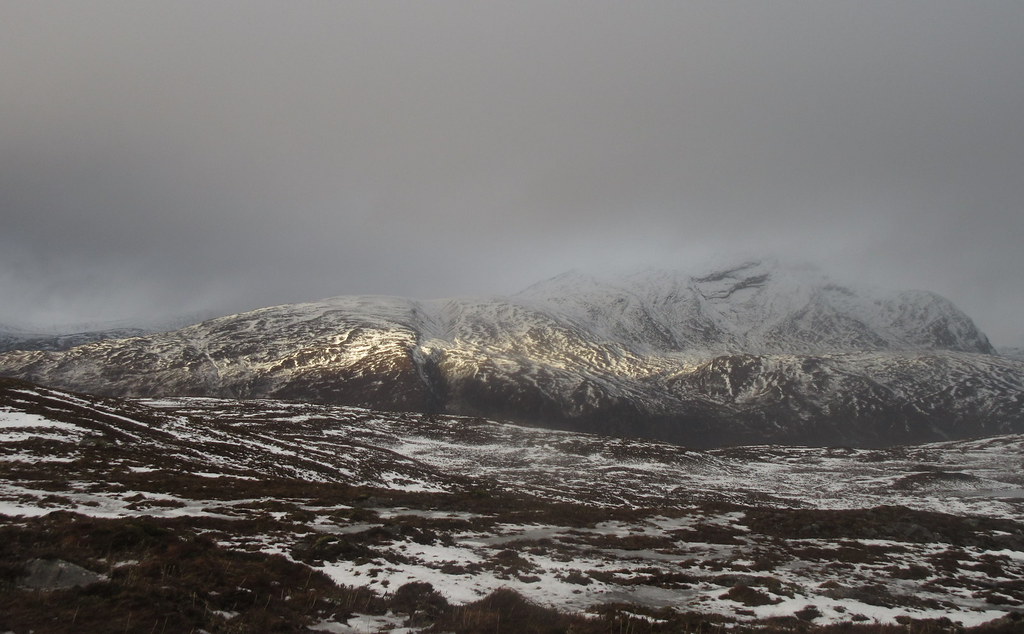 The wind was now hitting me on the other side, which took a minute or two to get used to, before finding my way down to Baobh-bhacan Dubha. Some steep snow of unknown depth and consistency got me there without too much bother, although it was hard to work out from above how safe it was. The stalkers path was almost completely buried in drifts so of no help at all. Getting up onto Eagan was less of a chore than expected, but the descent towards the stalkers path dropping back into Strathcarron was more of a chore, being on the lee side of the hill and full of big drifts which got softer as I got lower.

Finally there was just a short steep drop back to the floor of Strathcarron, although the marked path was invisible - completely the opposite to the well-built stalkers paths elsewhere around here. Instead it was a plough down through deep heather to reach the track and the easy walk back to Achintee. Not actually that bad, but it was a route I had considered as an alternative walk-in, and I'm glad I didn't try to lug a sack of coal over this way! 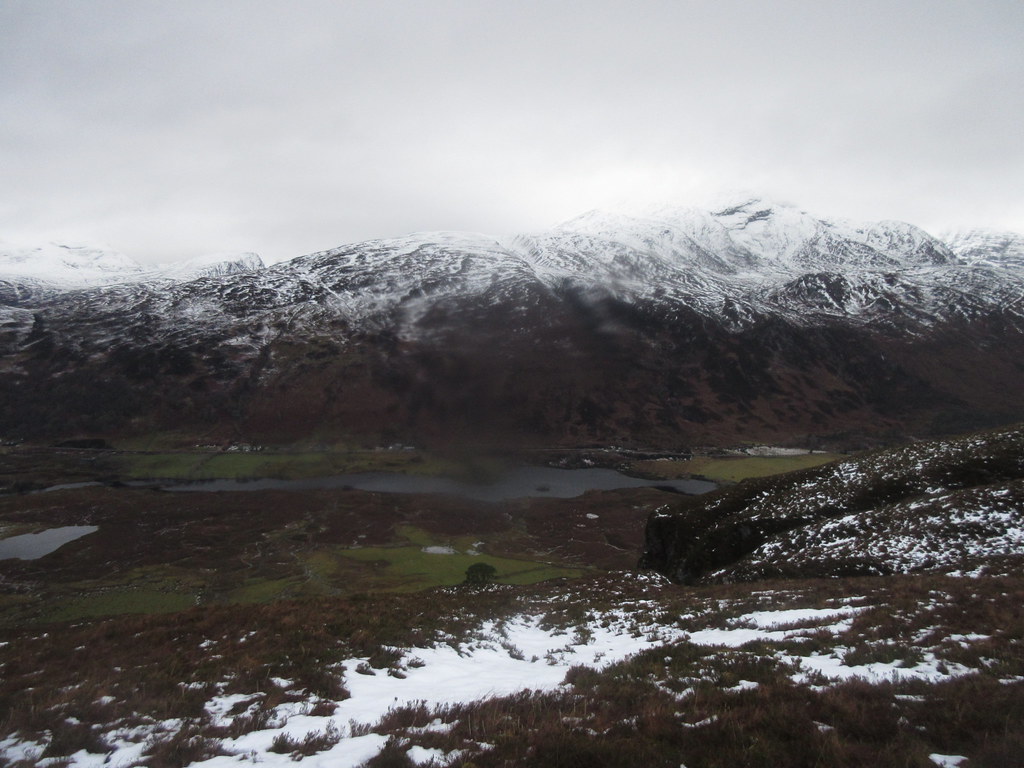 Bursts of heavy rain on the walk back along the road to Strathcarron station meant I probably managed the best of the day on the hill, and when I arrived back at the car at 3:30pm, I was cold and soaked again. Nothing for it but to jump in and drive off in my walking gear, getting the heating turned up to a ridiculous temperature.

In the end I didn't even quite manage two of the 6 potential hills in my plan, and only one bothy night (if I had stayed 2 nights, I think I would have stayed put at Bearnais rather than lug everything over to Bendronaig). But I felt it was a successful trip - my first new year's day hill in years, a decent night in a bothy and some challenging conditions on the hill. Much better than the sloth that usually overtakes me for the first couple of days of the year

Sounds like you were wanting to do some penance for the sins of the previous year!! And they must have been quite serious sins!!! On my recent trip to the Highlands, I shouldn't have been - but was- surprised at how exhausting it is plugging through deep snow, especially in high wind.

Bearnais is one of my favourites, small, in a wonderful locations, and with the "hordes" (one man and his dog probably) filtered out by being further from the road than Bendronaig!

I seem to remember thinking the coal went very quickly there myself, though we eked our out over two nights with half a fire log on each.

Fair play coming back over the top in poor conditions, its more of a slog than you'd think it might be.

We managed to lose the path returning from Bearnais to Achintee in the summer, so it must have been especially challenging in the snow with the light fading.

Phil the Hill wrote:We managed to lose the path returning from Bearnais to Achintee in the summer, so it must have been especially challenging in the snow with the light fading.

Yeah, its not the most obvious between the bealach and the bothy! Not so bad coming in to the bothy, as you can see it from a distance (if its not dark!), but going back you need to know where to aim for.