UP AND OVER SKIDDAW - 6 TOPS - NORTHERN FELLS

UP AND OVER SKIDDAW - 6 TOPS - NORTHERN FELLS


Yesterday had been fine in the south but the northern fells had been shrouded in cloud until midday, as we set off early in the mist we hoped today would turn out the same. We parked up at Gale Road where a local said it would be clear on Skiddaw, kitted up we set off into the mist at 7.30am.

skiddaw.gpx Open full screen  NB: Walkhighlands is not responsible for the accuracy of gpx files in users posts
Visibility was quite poor as we slogged up the pathway before cutting up Whit Beck, a slighter climb that led to the fence line which led to Lonscale Pike. We were soon on Lonscale Fell and the gentleman seemed correct as we could look across to Little Man in the clear. We retraced our steps to the top of the beck and then followed the fenceline, it was getting thicker We crossed Jenkin Hill and met the path at the gate that takes you to the summit and misses out the Little Man, it was so dense here we had a quick drink and cereal bar but all of a sudden it was clear again. Time to tackle Lesser Man, a quite steep path. halfway and the view up and the spectacular view down with the island of Blencathra Towards Lonscale, now in cloud Summit of Lesser Man at 815m Time to move on to Little Man,our second Wainwright and still in the clear View back to Little Man 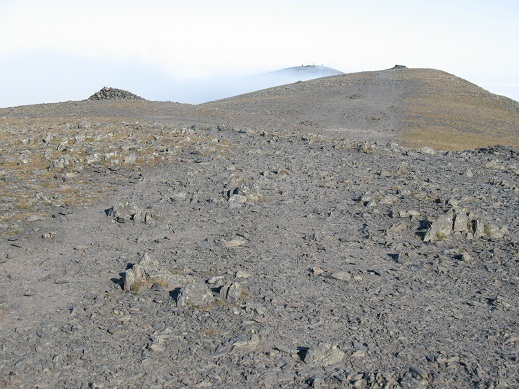 Towards the summit trig point We had a small break hoping the mist would lift but as it was quite cold we retraced our steps while making the final decision, I would go down the slate scree to Carlside and my husband would go back down to Gale Road for the car, he would then drive around to the Ravenstone Hotel. I set off in the pea souper and found it very steep down the scree with regular checks on the satmap, 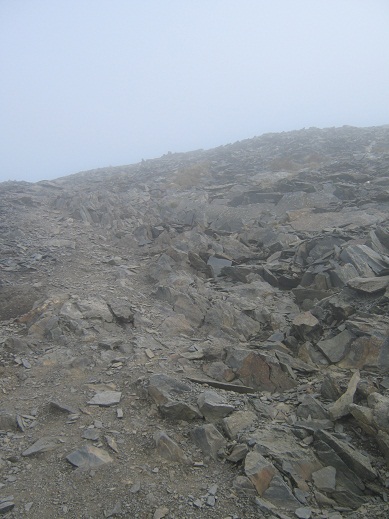 Scree to Carl Side

I found Carl Side and after retracing some yards I was on the ridge, NO VIEWS at all. It was quite easy to folow the ridge, a few people were coming the other way, not many photo opportunities but there was a Finland flag on Ullock This was a great walk, hubby was chuffed to get to the summit and I had flown solo in not too good conditions, a good day all round, oh and those inversions

, I've climbed Skiddaw 5 times this year and every time a thick mist has descended. Excellent pics

Must have been a good week for inversions had one on the High Street range earlier in the week.

Nice to see you leave the autobahn and strike for Lonscale Fell, I don't understand why more people don't go that way.

The Ullock Pike, Long Side, Carl Side route is the better ascent/descent route shame the mist spoilt your views, at least you have an excuse to do them again.

Looks like you had a good day. Despite the mixed weather a clear summit is always a good thing. Some good pics too. Are these new peaks to you? If so you are certainly getting your wainwrights ticked of (I'm going off what you have recorded on the site, assuming it's up to date.. I (and all H.W. members) will be expecting an invite to your Wainwrights compleation walk. About this time next year?? Crack on there.

I was wondering how on earth you got back round the fell from Ullock Pike foot to the carpark again!

Thanks for the comments, yes they were all new fells and my total is up to date, very kind to say I will be finished next year, think it will be the end of 2012 at best; only started walking two and a half years ago so happy with the progress. MC you must have read too fast,it says my hubby went back to Gale Road and drove around to pick me up, we aren't that keen, it's a good way back.

As for a final walk,my husband sorts the routes so he will probably leave a nice one for last, hope I'm not too old by then

Yeah, I saw where you said he went back to the carpark to pick you up - I was just meaning that I wondered how you would get back when I first saw your route when I started reading the post...

Apologies MC, it's someting we might do again, with one car it's the only way to do a different finishing point, worked great this time

Richard and I did a similar walk... we got the bus out of Keswick to Orthwaite road-end, went up via Ullock Pike and along the ridge and tops to Skiddaw. Then we did Little Man, Lonscale Fell and then dropped down and came back over Latrigg to Keswick. Worked pretty well if you get the bus on the way out so you don't have to wait around...