A few times a year, we have a a long weekend break usually staying in a cottage somewhere in the Scottish Highlands. Its a stress reliever and just good a way to repair our souls while having a cracking time, with our best pals Nic and Gordon.

Last October we rented a cottage in Strath Orchy near Dalmally. The cottage itself was on the minor B8077 road, set in quiet grounds away from neighbours and with beautiful views down Loch Awe, it was just what the doctor ordered.

Our first full day was wet with very low cloud, but wanting to get out and get some highland air in our lungs we decided to go for a walk to Loch Awe, and pay a visit to the Ben Cruachan Inn for lunch. A damp but enjoyable walk resulted in a few pints of the local Loch Fyne Ale and a hearty steak pie and chips. Not that healthy, but hey ho, that's what repairing your soul needs sometimes.

The walk back was more wet than damp, but all in all a very enjoyable few hours.

On the walk back the 4 Munro summits above Loch Awe were all covered in thick cloud, with no sign of any break in the weather. So after a fairly late night of good crack and few nips of Aberfeldy 12 year old, it was a fantastic sight to see blue sky's in the morning. After some discussion on plans we decided to tackle the two Munros of Beinn a'Chochuill & Beinn Eunaich. With Nic and Gordon heading down to Kilchurn Castle.

As we were late to rise, a quick breakfast was followed by rucksack checks, packing of snacks and water, and strapping on our boots. The morning was bright, clear and cold, perfect.

We decided to walk from the cottage back along the B8077, which we had walked the day before, to the start of the climb. The road walk was just over 1.5 miles to join the path just before the Alt Mhoille burn.

Once off the road, the path up the glen was on a dirt land-rover road, which started to climb after about half a mile, the gradient was fairly constant and the underfoot conditions good apart from the occasional Highland Cow parcels left for us. 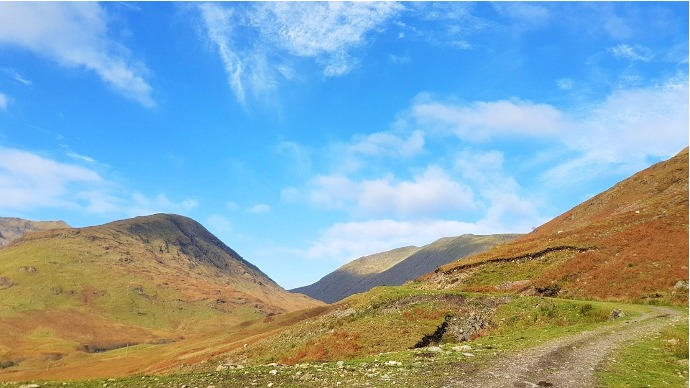 Following the track allowed us to keep up an even pace while gaining height, looking to the West side of the Glen we could see what looked like parts of the infrastructure associated with the Hydro-electric power station at Cruachan, little roads leading to what looked like tunnel entrances disappearing in to the mountain. I wonder if Dwarfs mine there? 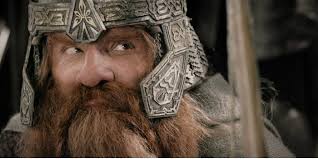 After gaining some good height the track then dipped down a little to cross over a bridge above a small burn, then climbing again, up towards a sharp right hairpin turn. After the turn the track becomes less well made, but still good underfoot.

After a short time, you look up to your left towards the first summit of Beinn a'Chochuill, although you cant actually see the summit at this point. Its a matter of picking your time to leave the track and just decide on a route up the fairly steep ascent. Some very obscure paths are visible, but its really just about getting your head down and heading up with some commitment. 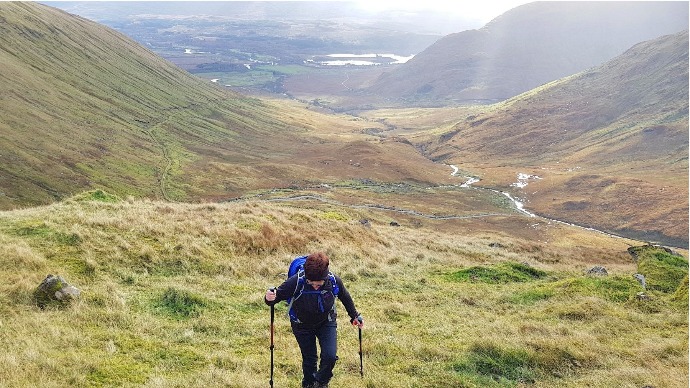 The rain from the day before made the underfoot conditions a bit muddy in places, but nothing really too challenging. It was about pacing the ascent, which meant taking regular breaks to admire the views, take some pictures and catch our breath.

On this part of the ascent we stopped off and had a drink and some nourishment, while sitting we watched another couple tackle the ascent, after some breathless exchanges they carried on the ascent as we packed up. 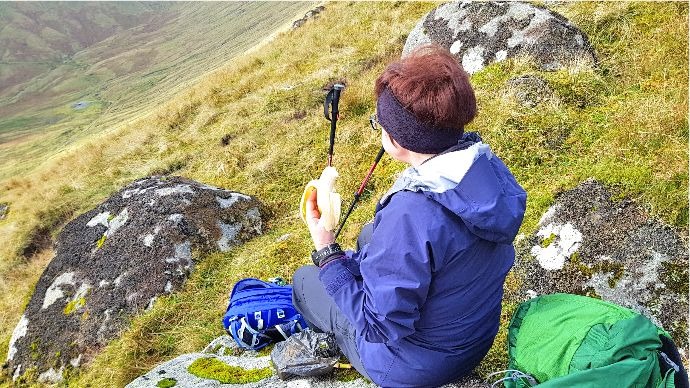 After a while the ascent starts to slacken off and you emerge on to the Bealach (or saddle) between the 2 summits. A path emerges and we followed this to the left towards Beinn a'Chochuill. The path takes you towards a rocky crag, which for some can look like the summit, but its not. The summit lies a bit further on. 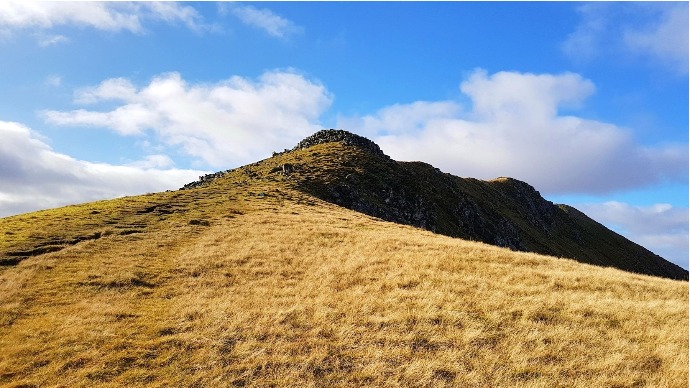 A small cairn marks the summit, after stopping briefly to take some pictures we decided to keep moving, the temperature on the summit had plummeted with a wind chill which was extremely cold. Not pleasant to hang around in despite the glorious sunshine and views. Loch Etive and Glen Kinglass were in perfect light and showed all their stunning glory before us. 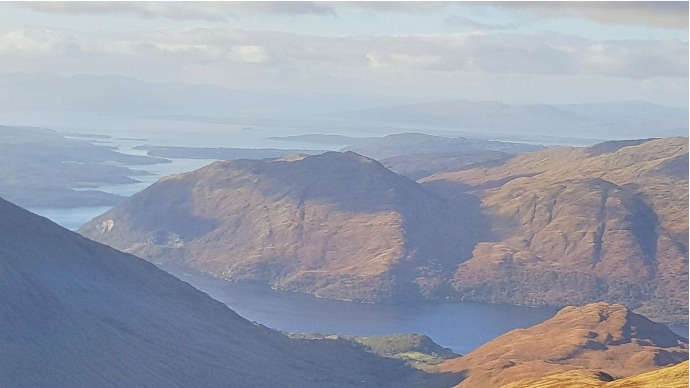 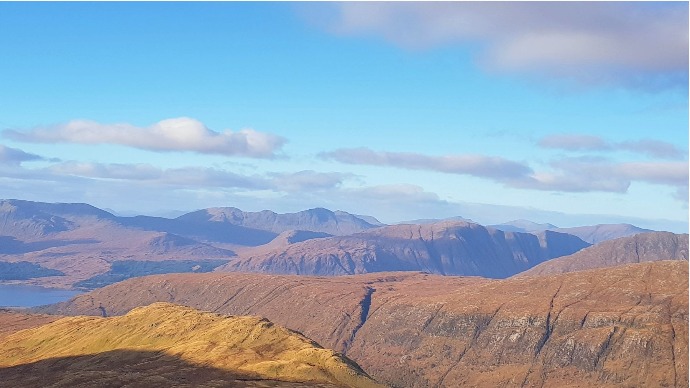 The summit of Beinn Eunaich, was clearly visible along with the straightforward path, which descended down past where we had joined the Bealach, before rising up towards a rocky ascent to Beinn Eunaich.

Once off the summit of Beinn a'Chochuil, the temperature rose and the jackets were off again as we enjoyed the gorgeous views and sunshine of the late October afternoon.

Once the descent was completed the final pull up Beinn Eunaich commenced, a path existed, which was steep in places, however as we approached the rocky part to the summit, it was a matter of just picking a line and treading carefully. 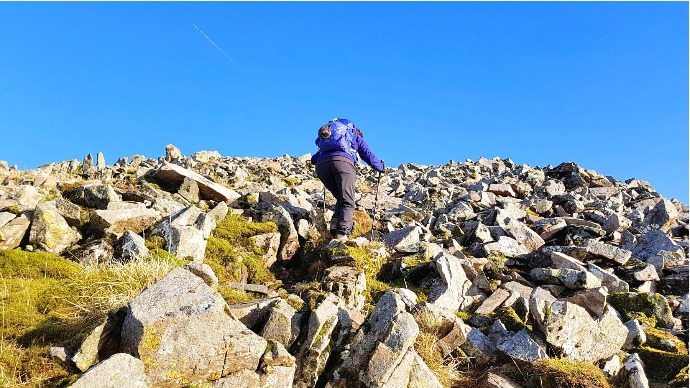 On the summit we enjoyed the stunning views down Glen Kinglass, Glen Strae and the surrounding mountain tops. To the East of the cairn was a vertical drop, which was a good reminder of height we had gained.

To be honest, we could have stayed in that moment for ever, so peaceful and tranquil, it was a perfect moment. Despite knowing we were now pushed to get down in daylight, it was a real struggle to leave. After a short rest and refreshment, we started heading down off the summit following the path. 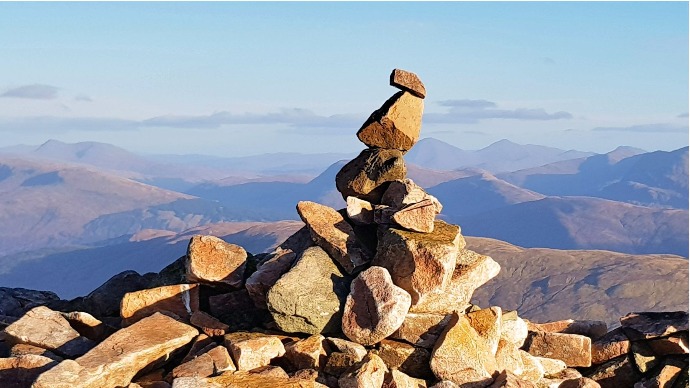 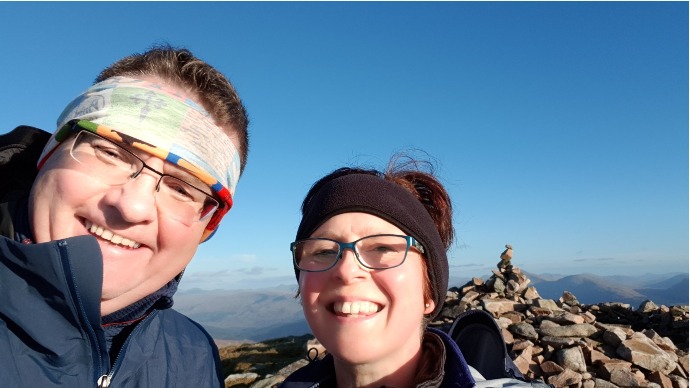 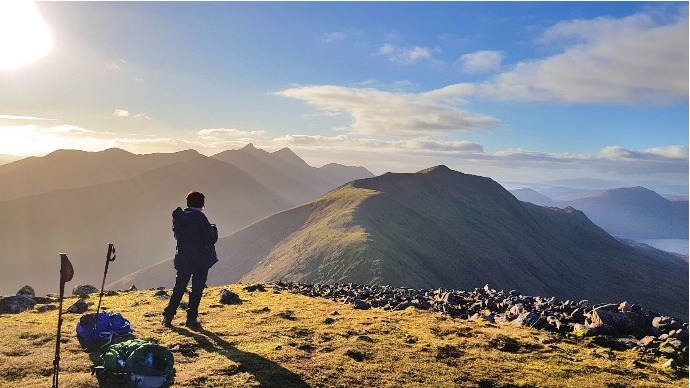 Its not possible to follow the path along the wide ridge all the way down, due to rocky crags at the Southern end. So after a while we had to take a right off the gentle descent and tackle a very steep section which joins the land-rover track we had walked up at the start of the day.

This steep descent was treacherous, the rain from the day before had socked the turf and weak peat below, causing the turf rip underfoot, which caused more than one tumble. No injuries, but very slow progress.

Once on the land-rover track again, the return was easy with tired legs and a huge smiles. Darkness swamped us as the sun set as we joined the B8077, which meant walking back along the road to the cottage in an eerie atmosphere. 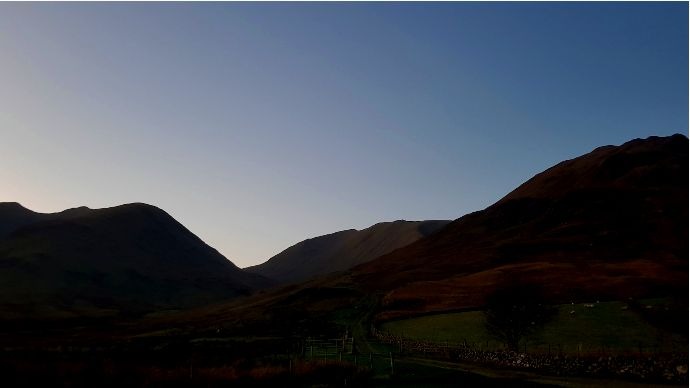 The moon and stars were out, and ghost stories were told between us as we headed back to the cottage and a well earned drink. 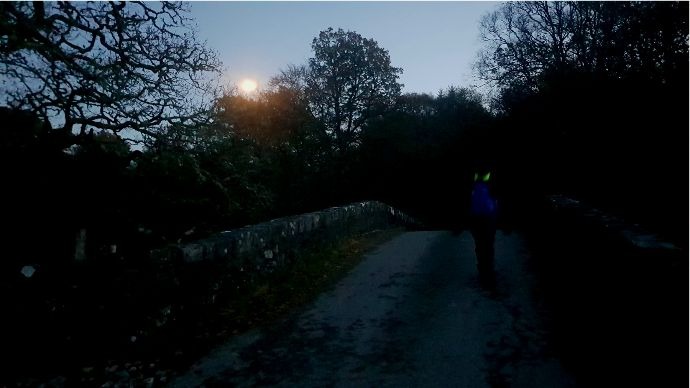 Wonderful day was had in a great part of the country.

Lucky you getting the hills when you could see something - I had clag all day, still great though! Looks like you enjoyed it very much.

Looks like a great day out, stunning views off Euanaich. Hoping to climbs these two on Saturday.