We stay not far from Biggar in deepest South Lanarkshire, more Border country than industrial Lanarkshire. Our trip to Beinn Ime, was planned as a drive, climb and drive back, so an early start was the order of the day.

Up early, but not to bright, we set off about 6am, with our plan to be starting the climb at around 8am.

We chose Butter Bridge as our starting point as we thought it would be less busy than the route up via Ben Narnairn from Arrochar, plus it provided a higher starting point so less ascent in the time we had available.

I always think that Butter Bridge sounds like it should be in the English Lake District or Cotswold’s, it just sounds out of place on the West of Scotland. There is some notion its called Butter Bridge because during the summer months, cattle would graze the high pastures, and a temporary dairy was set up adjacent to the old bridge crossing the river, where dairy maids would make butter from the cows milk.

The old bridge is still there, constructed in 1745 by General Caulfield to carry a military road, a turbulent time for the Highlands of Scotland without doubt with Bonnie prince Charlie landing at Glen Shiel to start the 1745 Jacobite uprising. Ample car parking is provided adjacent to the old bridge and just off the A83, not far beyond the Rest and be Thankful.

With car parked, boots on, and kitted up, we headed back along the A83 for a short distance before commencing the ascent next to an old abandoned building. Having checked the Mountain weather forecast the day before, we were a bit surprised to see thick cloud and no sign of Beinn Ime at all when we started out, however we trusted the weather hoping for things to clear up as predicted. Staying on the right hand side as we climbed we followed the Kinglass Water up the Glen towards where Beinn Ime should be. I always remember being told if you are lost on a hill, following water down in poor visibility is not a great idea, as the water will always take the steepest (quickest) way down. Following the Kinglass Water had the opposite effect, it was steep and very wet/muddy in places, making progress slow.

We followed the Kinglass Water, struggling through the mud, with the path very indistinct in places, but we just kept following the burn and climbing. As we climbed, the glen opened up a bit and the burn became less of the torrent it had been lower down, providing an opportunity to cross over on to the left bank. Once over we headed in the same general direction towards the Bealach a' Mhargaidh. 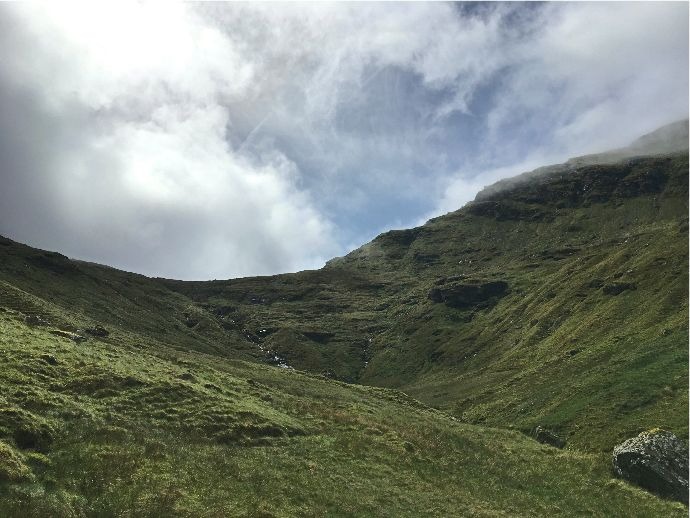 By this time the cloud was starting to lift very slowly and our hopes grew for a cloud free summit and some great views.

Once on the Bealach, we took a short break for nourishment and fluids, at this point we were right on the cloud base, with rolling gaps offering tantalising glimpses of the slopes up Beinn Ime. After packing up and keeping an eye on the weather , we circled round the Bealach a bit to the Southern to tackle the summit. Some reports had suggested a path would be visible, but with the cloud rolling in we managed to not find it. So we just pointed ourselves to the Summit and started the slog up the steep slopes. However as we approached the summit the cloud thickened considerably, causing some disorientation if I’m honest. After a struggle we finally made the summit, but with near zero visibility. So we just headed down quickly to get below the cloud, all very disappointing. To rub salt in, once we cleared the uppermost slopes, the cloud cleared as predicted by the forecast, all too late though. Heading back down we decided to try and stay on the left hand side and further away from the Kinglass water, the opposite way from the way up, however we recognised that our mapped route would take us close to some rocky crags on the North side of Beinn Luibhean. Later we would find out this would push us back towards the Kinglass water and a steep grassy descent down to the water.

Astonishingly, half way down the ascent the sun came out and we were treated to blue sky’s and soaring temperatures. Once we picked up the Kinglass Water again, we just retraced our steps back to the car park.

It was tougher day than expected, and a bit disappointing with the weather, but any day out in the hills is a good day really.

Re: Beinn Ime from Butter Bridge

Pity about the clag at the top - it's often way of it, clears up on the way down

Users browsing this forum: Ezra and Freya and 50 guests