Given the good weather earlier this week it seemed almost criminal for me not to try and take advantage of it, so on Tuesday I took the day off work and headed out into the hills. I decided on the Northen Carneddau, since it was relatively easy for me to get to and from inside a day, and it's not a part of Snowdonia I've had chance to walk before. The main goal I settled on was Foel-fras - the northernmost of the Welsh 3000ers (and most would probably also say the least distinguished of the Welsh 3000ers too; I think it's name means something approximating to Broad Hill, which gives you a good idea of what to expect), on the way taking a couple more Hewitts, Drum and Llwytmor.


Foel-fras.gpx Open full screen  NB: Walkhighlands is not responsible for the accuracy of gpx files in users posts

I got started about 10:30ish, warm, calm, bright and sunny, maybe a touch hazy but otherwise about as beautiful an October day as anyone has any right to expect, heading up from the back of Llanfairfechan along a broad, easy track towards Drum. Once you reach the summit of Drum the broad track runs out, but the route doesn't get any more difficult to follow, along a grassy path beside a fence and then a wall up the broad, sweeping flank of Foel-fras. The summit of Foel-fras gives good views south across the rest of the Carneddau. Leaving Foel-fras towards Llwytmor, the walk becomes pathless, down a slope of grass and boulders and across a broad saddle of peat groughs that I'd imagine could get quite wet and boggy if I hadn't been walking it after more than a week of dry, sunny weather. This section towards Llwytmor and on down was probably my favourite part of the whole day, feeling that much wilder and more remote than the previous well pathed sections, with no other people in sight for the entirety of it. As well as the more usual ravens you get on high ground pretty much anywhere in the country, there were also several (very noisy) choughs and a scattering of Carneddau mountain ponies. The one slightly tricky part of the whole route came towards the last third of the descent from Llywtmor, where you have to make your way down over the top of Aber Falls and across a fairly steep scree slope. There is meant to be a path across this section, and sure enough following along the easiest and most obvious looking descent line took me straight to the top of a very obvious looking path that seemed to be heading in exactly the right direction. I'll admit at this point that I did have a nagging little doubt that I was still slightly too high up - the river was still about fifty metres below me, and I thought the path I wanted was supposed to be a little further down towards that. However, this did look like such a good path, and the slope down to the riverside was steep, uneven, covered in bristly knee-high heather, and not not something I wanted to have to go down (and possibly then come back up again) if it could be avoided. So off I set. 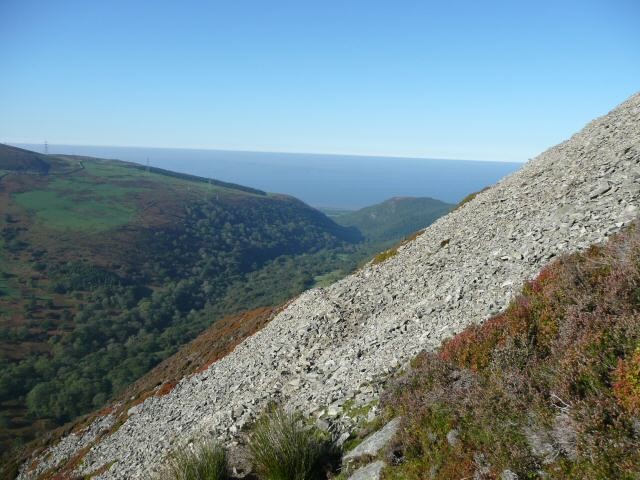 After a short time the path started to get narrower and steeper, but it still seemed fairly good, and was still headed in the right direction. Suddenly though, after a slight crest it simply vanished. Instead there was a narrow, precipitously steep gully full of scree that made me feel slightly ill just looking at it. For I while I looked to see if the path might continue up and around this drop off, but no. I couldn't see anything ahead I would even dream of attempting as a way forwards.

As I turned and headed back I felt a strange mix of ' hah, see I was right all along, that was the wrong path, you idiot' and 'if that's meant to be the way down I'd rather do the whole damn walk in reverse'.

There did turn out to be another path further down nearer the river, though if anything this was narrower and less distinct than the one further up. There was one somewhat uncomfortable section where a stream intersected with it, ran down it's length for five or six metres, before diverting again, where all the hand and footholds were very slippery and I was very aware of a rather steep drop off to my left. I don't think I'd have enjoyed that at all following heavy rain, and it made my heart beat a lot faster as it was - although its probably much less of an issue ascending. Eventually though I made it to the bottom with little actual drama outside my own fearty head. 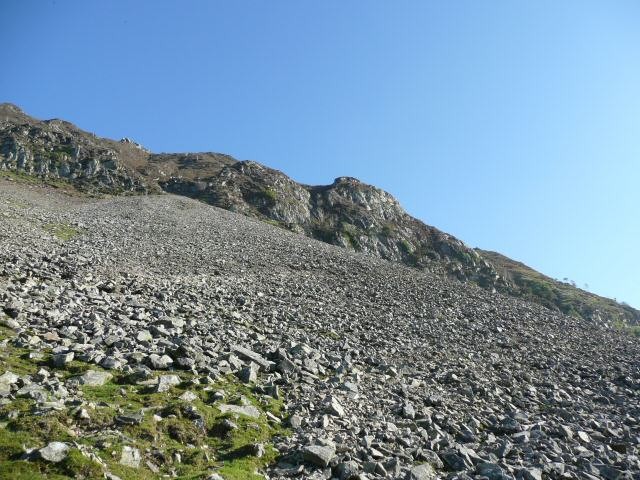 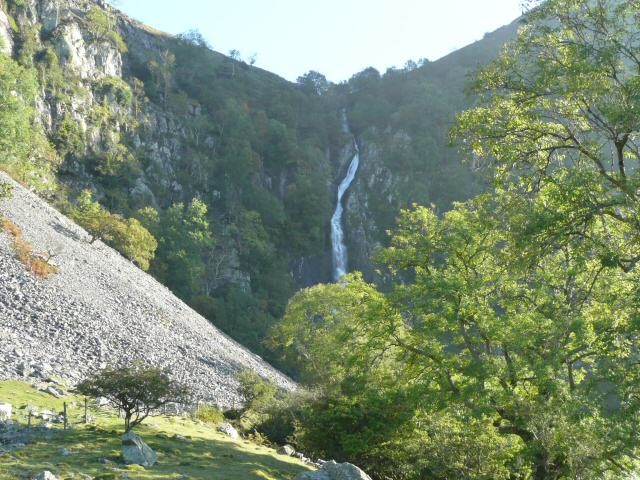 Following that, all that was left was a nice easy stroll along the North Wales Coast path back to my starting point in brilliant late afternoon sunshine. All in all a wonderful day out. Not seen many reports of this end of the Carneddau - good choice of circuit. These hills were visible to me from most of the classrooms in my high school, so sitting in some tedious French lesson while staring at them covered in snow used to be a bit trying

Damn! Malky beat me to the naming of the mountain! I always thought the ground above Aber Falls looked tricky and couldn't imagine where the route went - definitely one for going up that way rather than trying to come down that way unseen!

Many thanks for the Elidir Fawr ID

. That was my first guess, but since I didn't check the direction I was facing other than south-ish I'd convinced myself I was probably wrong about that.

And yep, I think doing the route in reverse, starting out at the bottom of Aber falls is probably a better way of doing it. No problems at all route finding that way round, and an easy enough ascent really.

I've stood at the bottom of the Aber Falls quite a few times and gazed up to the left but never really figured out where you were supposed to go. I was toying with the idea of going up further away to the right by the side of the other waterfall - looked grassier and easier, although still steep.

That first section of the path I used is probably quite faint and not visible from the bottom. If you're standing at the last gate on the main track up to the falls (where I took the photo of the falls from) there's a path that runs north-east up the slope to the left, away from the falls, heading towards a ladder-style that crosses over into the forest plantation. If you head up that, the ascent path diagonally down the scree intersects with it. It's not particularly steep to start with, and once you're past the scree becomes a bit more obvious and easier going. The only bit I didn't much like was where the stream intersects with it, like I mentioned.

Certainly, coming down I couldn't make out any alternative routes up that I in any way liked the look of - either left or right.

I do remember this path spooking me a bit as a little kid. Since then I've had no problems with it. As you say, you need to head away from the falls, making a rising traverse to the edge of the woods (you can also get to here by leaving the path much lower down the valley, near a cottage. There is a path which heads through the woods and crosses a stile to get you to this point). From here, the path goes diagonally across the screes towards the falls. Close up to the falls, it crosses a gully, and you have to do some streightforward scrambling over a rocky pavement (less straightforward in icy conditions), then you are just about into the upper valley.

How obvious the route is probably varies from year to year as the screes tend to shift. Generally though, my mum is happy enough to walk up here and she has absolutelty no head for heights or scrambling ability whatsoever. Admittedly trying to locate the route from above for the first time could be more difficult - helps to have gone up it from the falls first to identify the correct scree path.

Well I'll definitely be doing it on the way up if I do it...