Barely a few hours after welcoming in the new year, I was unloading the bike at Invercauld car park, a little precariously given the black ice underfoot. I'd not had the most energetic period between Xmas and Hogmanay, to put it kindly, and getting the boots on seemed a good way to start 2018. Thin cloud overhead gave the scenery a drab tinge, flushed of colour, but for an orange glow above Lochnagar that hinted at better to come. It was a watchful cycle along the tarred track past Invercauld House, my wheels crunching through ice and then snow, my back-wheel spinning to find traction as the gradient increased. Having twice to lug the bike over a 7 foot deer fence, I was relieved to come across the track heading northwards out of Gleann an t-Slugain, and the simplicity of walking. On the approach track through the woods

Snow began to fall so lightly it was barely perceptible. The track crossed a burn and soon emerged from the pines onto the colourless heather moor, as a herd of stags crested the ridge above. Fresh snow was a growing presence as the track wended leisurely uphill, before the frozen parallel ruts petered out at a ford. Mist was beginning to peel off the ridges above so I stopped for an early lunch, hoping conditions would continue to improve. Nothing sends the spirits soaring like sun on gleaming, fresh snow, and an otherwise pathless heathery trudge, was uplifted to an exhilarating walk towards an ever-deepening blue horizon line. I surprised a mountain hare, catching its gaze from a ditch no more than 6 feet beyond me, before it took flight. I took a line of tracks left by one of its cousins as a guide before I broke my own trail through satisfyingly-weight-bearing, windblown snow. Sun breaking up the mists This Corbett is potentially unmatched for the confusion of its summit topography, with numerous bumps and knobbly bits vying to claim the glory. This gave cause for the highest point to be relocated 1 km in 2013 and renamed Creag an Dail Bheag - the western-most top - from the previous title-holder Carn Liath, which overlooks neighbouring Culardoch. Taking no chances I made a tour of all of them, the true summit bearing the most modest cairn. The highest point - the western-most bump. 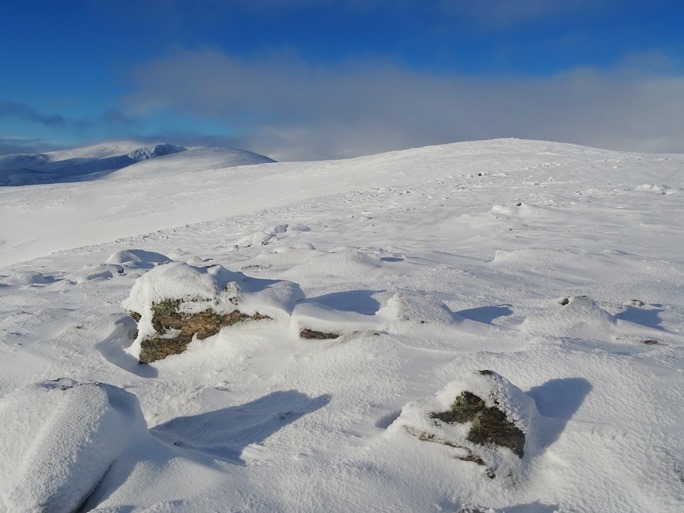 A wild, arctic expanse stretched out in shadow towards the misty Ben Avon, and a gathering wind threatened a deterioration in conditions. I took time though to enjoy the graceful, snow-runnelled flanks of an absurdly-located stone dyke. After the final marvel of a faint, shimmering snowbow overhead, I began my descent. The most substantial cairn, but not the true summit. The broad south ridge was enjoyed in sunshine, with ample chance to photograph the neighbouring Cairngorm giants in full winter garb. Dozens of deer crossed the ridge half a mile ahead, pausing to pose against a fine backdrop of snow, mist and mountain. I bounced through the heather off Meikle Elrick, the final bump along the ridge, before rejoining the approach track. The pine wood was an altogether more vibrant place from the morning, with light spilling between the branches and the scent of freshness devoured voraciously by well-exercised lungs. I relocated my bike for a swift 15 minute cycle along the 3 miles back to the car, before a drive home to enjoy a fine New Year's meal. Beautiful pics. I love the ghostly face, the one after and the last deer shot as well as the view over to Ben Vane and the snow-bow. Er, well, all of them basically!

EmmaKTunskeen wrote:Beautiful pics. I love the ghostly face, the one after and the last deer shot as well as the view over to Ben Vane and the snow-bow. Er, well, all of them basically!

Thanks Emma. I think there was a stormy weather in the central belt on New Years Day but finer conditions further north. You could see the cloud banks to the south but I was always hopeful it was clear up where I was and fortunately the sun came out and the camera could see some action!