Tuesday, 13th. July, 1976:
I had just turned sixteen and this was my second trip to Scotland. This year, the group from my school had decided to go to the Cairngorms and we had come up on the train from Manchester to Blair Atholl on the previous day before walking up Glen Tilt to camp by a bothy on the south side of the river. The wire and bosun's chair (pulled across the channel by ropes) which connected the bothy to the track on the north bank wasn't a very efficient way of getting more than twenty of us across channel. The bothy was known as Balaneasie and had, apparently, been saved from ruin by a group calling themselves the Glen Tilt Mountaineering Club in the early 1960s before it fell into disuse in the late 1970s. 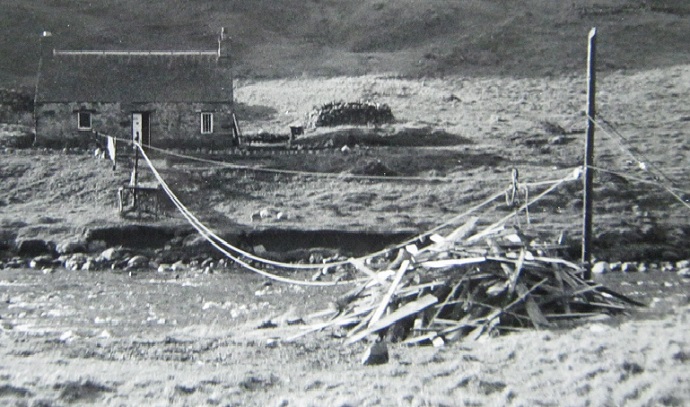 An old photo of Balaneasie taken in the early 1960s

At any rate, the next morning was fine and Ian Harris, John Hickey and I took down our tent (an old, blue Moac), re-crossed the Tilt with everyone else and set off into the wilderness, heading for Loch Morlich via some Munros. I remember that the river crossing did not go especially well as a large bag of porridge in Dave Shaw's rucksack ended up in the water as it was winched across on the bosun's chair; it was pretty clear that we were going to be hungry before the trip was out. That said, the trek up the valley to the col between An Sligearnach and Dun Mor felt good before we were obliged to put on our waterproofs and flog up the boggy floodplain of the Tarf to arrive at the Tarf Hotel; a sign declaring that the AA had awarded the bothy two stars and the presence of three sprung beds inside boosted morale a bit. 
our_route.gpx Open full screen  NB: Walkhighlands is not responsible for the accuracy of gpx files in users posts
After sorting things out, a group of seven of us set off to climb what my diary describes as an un-named Munro to the south. Ian and I left John to put up the tent and slogged over a peaty wilderness to the summit and back in cloud and persistent drizzle before returning to find a tent full of water. We slept in bivi bags inside the tent that night!
Next report: https://www.walkhighlands.co.uk/Forum/viewtopic.php?f=9&t=78359&p=367623#p367623.