Sgurr nan Conbhairean horseshoe is considered by Munro baggers as an easy route to add 3 M's to the tally. We have done them before (me once, Kevin twice) and for some time now we entertained repeating at least part of the route in winter conditions. It meant PROPER winter conditions, with snow and ice, crampons and axes

Now, at the very beginning of 2018, we got our chance.
I was actually considering climbing an easier local Graham (we have one unclimbed G' left for wintry conditions) but Kevin felt somehow it would be wriggling out of real adventure, so we settled for the more demanding route in the end.
Having experienced deep snow and hard going on Little Wyvis a few days before, we expected we would be slow in given conditions, so realistically, Sail Chaorainn (the one at the very back of the ridge) was out of question - not enough daylight. In summer conditions, we managed the whole route in 7 hours, and that including a picnic with 30min nap on the summit of Sail Chaorainn

but this was a whole different story. This was January and winter was full-on, so no picnic planned, though we packed hot tea and sugary snacks.

6am, still dark, time to wake up, cinnarizine pill, coffee, toast, rucksacks ready, get in the car... the usual routine. Kevin was in a "mallory" mood: we climb them because THEY ARE THERE!!! I was half asleep. Even as we arrived in Glen Shiel at half past eight, I was still a walking zombie. I was shaken awake by the cold conditions outside and the icy car park surface: axles and toe loops again! The sun was rising in the east and the whole world put on an orange-pink cloak for a short time:

Our plan minimum was to climb the standard route up to Carn Ghluasaid. If weather broke or walking was too harsh, we would retrace our steps from here, but conditions allowed, we hoped to traverse to Sgurr nan Conbhairean, which we did in the end. In summer time, we would obviously continue down to Drochaid an Tuill Easaich and descend its southern ridge, but that would mean breaking fresh trail all the way, so retracing our own footprints seemed the easier option.

Track_GLEN SHIEL 07-01-18.gpx Open full screen  NB: Walkhighlands is not responsible for the accuracy of gpx files in users posts
The track to the transmitter mast was very icy: 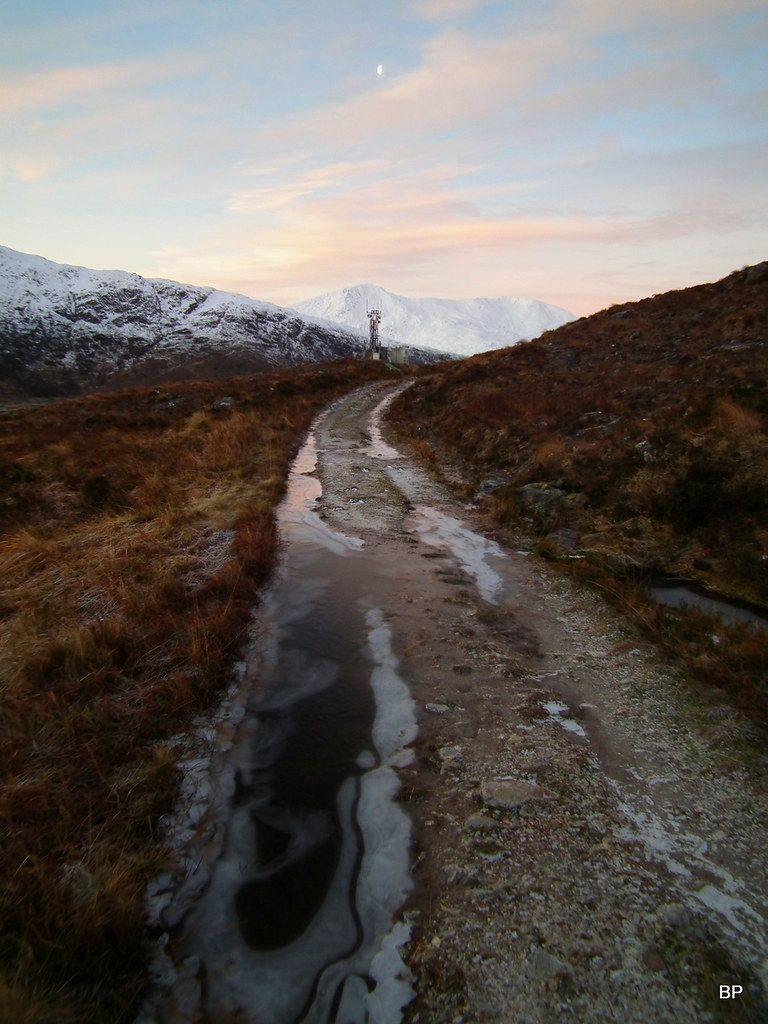 2018-01-07 glen shiel two 008 by Ewa Dalziel, on Flickr
...but we were distracted by the charms of the sunrise, the pink and orange colours in the sky above us, with the contrast to the white peaks around us, the landscape looked pretty amazing:

Past the mast, the track becomes a path and though obvious, it was more like a frozen stream, so we decided to walk alongside it on frozen vegetation, but even here, we encountered some balance problems: As the day woke up and the sun arrived, pink and orange turned to shiny, bright yellow:

Looking up, we saw the white slopes above us and got mentally ready to tackle the hard going in knee deep snow. Thankfully, there were footprints in the snow, suggesting people have been up this route in previous days. That would definitely help our cause.

On the frozen path, with the remnants of sunrise behind me: As we gained height, the snow was getting deeper... but views were getting better, as well: We walked out of the shadow and into the bright, snowy world... INTO WHITENESS. Breathtaking. Kevin kept stopping as the light for photos was excellent:

We reached the bottom of Coire nan Clach and here going got tough. Knee deep, very soft snow, but at least we had someone's trail to help:

I stopped to adjust my gear (bl***dy snow was getting into my gaiters again!) and lost sight of Kevin, who disappeared behind a large boulder. Then I heard his voice:
"Heeeeelp! I'm stuck!"
I found him up to his waist in a snow hole

and as I pulled him out, I couldn't stop giggling. Even with broken trail, there were still pitfalls in the snow, one step and oooops! You were drowning like a raisin in the cake mix.
Traps and pitfalls everywhere, but the landscape made me think of ice-cream dessert: He obviously wanted to rehabilitate himself after the raisin-in-the-cake experience! He rushed up the stepper section without any hesitation: I was a bit slower, checking the ground under the snow carefully. It was laborious work now: two steps up, one down: Kevin was waiting for me by another big boulder... 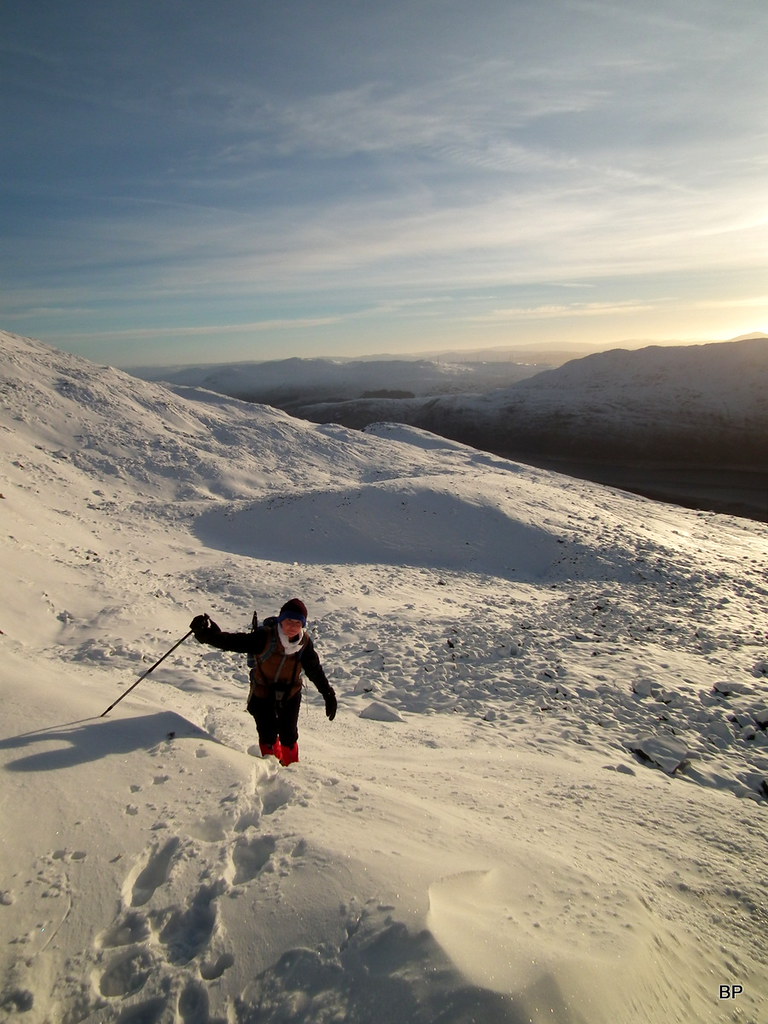 The final climb to the ridge now looked easier:

I took over the lead on the easier section but never let Kevin out of my sight again. I didn't want to lose him in another snow hole! As we emerged on the ridge (which is still uphill but much less acute angle), we were again gobsmacked by the views. We were up to our necks INTO WHITENESS!
Drochaid an Tuill Easaich ridge: We spotted two young lads heading for the summit as well (they must have taken a different line up the slope). The stopped to chat to Kevin for a moment (I was busy trying to blow my nose, apologies) and then headed for Carn Ghluasaid while we took the advantage of the last minutes of good light for some more photos of the stunning landscape.
Sgurr nan Conbhairean our final target:

The summit is there somewhere...

We arrived on the first Munro at ten past eleven - plenty of time to do the second Munro, but we knew we still had much tough going before us, so we only lingered for a few minutes for a snap or two. Sadly, high cloud was pushing in from the north and the fantastic light we had earlier was fading now. Still, views from the edge of the northern cliffs of Carn Ghluasaid, into the hidden Coire Sgreumh were second to none: 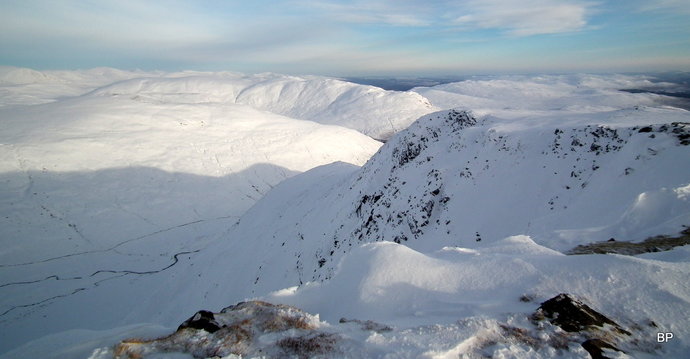 Zooms to hills on the northern horizon: Before we left, we admired Ben Nevis for a short while: On a windswept surface of the ridge, walking was easy to begin with: On the short ascent to Creag a'Chaorainn, I suddenly felt exhausted. It was like something (a mountain vampire?) sucked all energy out of me. All joy was gone. I was walking like a robot. And when we saw Sgurr nan Conbhairean again, it looked so far that I was suddenly convinced, I didn't have enough strength to continue.
Oh so tired:

I was suffering from low sugar levels in my blood. I was also very cold suddenly, shaking like a leaf, teeth chattering. Kevin spotted a cairn on the ridge of Creag a'Chaorainn and we headed there for a snack break. Initially, we intended to have lunch on Sgurr nan Conbhairean, but plans had to be adjusted. I forced in a ham sandwich, but it didn't help much. Kevin passed me a halva bar - 500 kcal of pure sugar and sesame oil. Very sweet, very sickly and (in any other circumstances) very unhealthy. My fingers were numb and I dropped the unwrapped bar on fresh snow, but it made no difference. I picked it up and stuffed it in my mouth together with snow. Tried to drink some water from my bottle, but surprise, surprise, it was frozen! Thankfully, we had warm tea in the flask!
The injection of pure sugar made miracles. I felt like life was returning to me. I put on my waterproof jacket, just to give my body an extra warm layer, and we rushed on towards Sgurr nan Conbhairean. Now, it didn't look big and unreachable anymore, and after a surprisingly short time we reached the summit cairn, almost buried under huge amount of fresh snow!
Halva-propelled up the mountain: The two lads we met earlier were already on the summit, so we asked kindly for a snap. So here we are, cold but smiling on the summit of Sgurr nan Conbhairean: 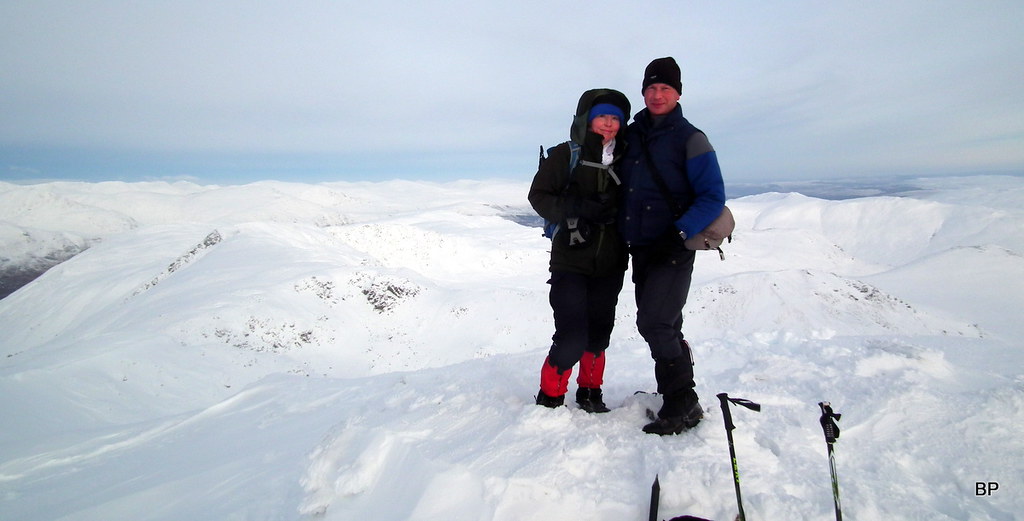 2018-01-07 glen shiel two 140 by Ewa Dalziel, on Flickr
and some panoramas of the white world around. Looking due north: We wanted to continue the circular, but there was no trail visible on the Drochaid an Tuill Easaich ridge, which meant breaking fresh snow all the way. After all the experiences of the day we decided it would be much easier to retrace our own footprints, skipping the summit of Carn Ghluasaid. Walking downhill was easier than up of course, but we were still drowning in knee-deep snow. At least, after the halva injection, I was feeling stronger now: We met another couple descending from Carn Ghluasaid, they had only done the one Munro and reasonably, decided to turn back.
Going was relatively easy until Kevin decided to take a detour on fresh snow. Initially, it was fun running down the pristine white surface...

...but later on we came across some very deep snow and experienced the raisin-in-the-cake feeling again! 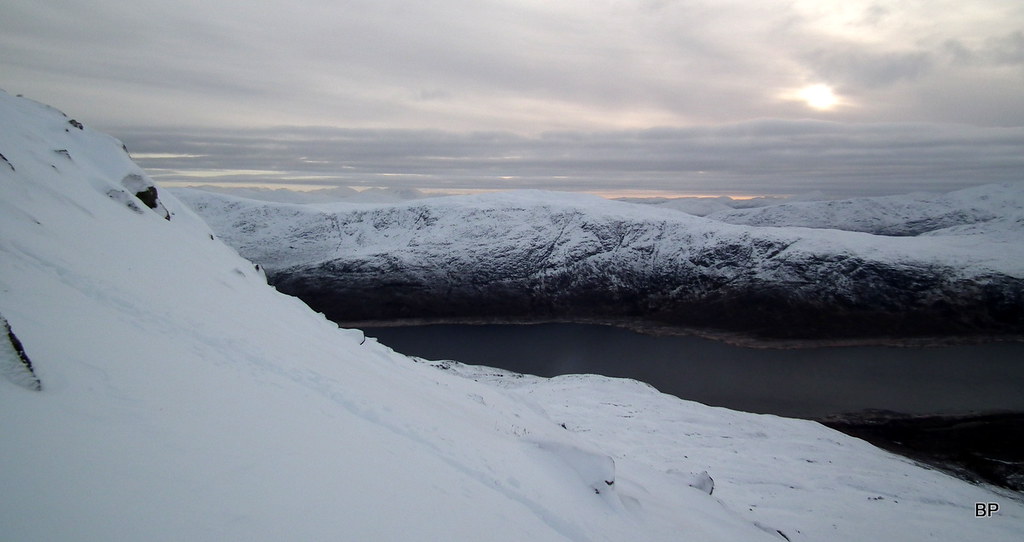 2018-01-07 glen shiel two 166 by Ewa Dalziel, on Flickr
Lower down we found somebody's footprints again and descended safely to the main path. We met a noisy ptarmigan (no photos as it disappeared into whiteness before we grabbed our cameras) and had a few near misses on the icy path below the snow line, but got down safely and in one piece. As we approached the car park, we came across a bunch of French-speaking tourists, one of them asked "Can we go for a walk up there?" which made me feel odd. We have just been through seven hours raisin-in-the cake ordeal and he is asking me if it's possible to walk up there?...

.............
All in all, a magnificent day, despite all the hard work. An adventure we've been waiting for after last year's dodgy winter. Fingers crossed, there is more to come and as days are getting longer, better chances for more difficult routes. May weather be with us this winter, it should be a great year.

Looks like some fabulous colours in the sky first thing Panther.
Ben Nevis is around 43 kilometres from the summit of Sgurr nan Conbhairean, so that's an impressive view considering the distance

Whiteness everywhere, even down your gaiters!

How wonderful to look across the hills and just see a sea of white.