our_route.gpx Open full screen  NB: Walkhighlands is not responsible for the accuracy of gpx files in users posts
Fitty Hill is less than three miles from my home (I see it from my front door every day) and I have climbed it several times. Although it's one of the lowest of the sub-2000s it's a grand hill that rewards you with spectacular views over the islands.

My daughter dropped me off at the parking area at Kirbest on her way to work and I set off past the farm buildings and across the front of the house onto the Westside cliff path that runs from Kirbest to the RSPB reserve at Noup Head.

After a short fenced off path there is a climb over a huge stile which brings you out onto open hillside/clifftop. With bonxies (great skuas) still around, I stuck to the clifftop path. There's a temptation to take the shortcut across Skea Hill, aiming directly for the summit of Fitty Hill, but the bonxies don't take well to being disturbed. Besides, the cliff path is a delight with views opening up to Noup Head Lighthouse to the north, the Broch of Birsay to the west and back over Rousay and Eday to the south and east. 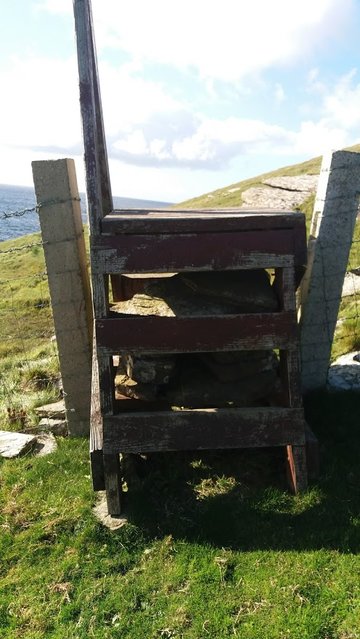 I climbed two more stiles before coming to a fence which leads to the top of Fitty Hill. Stick to the fence here - either side is as good or bad as the other. The ground away from the fence can be very rough, particularly to the north which is an area known as the Bloody Tuaks - part of the site of an old battle between Westray folk and raiders from the Western Isles in the 15th century, although in this case 'bloody' is thought to come from the Old Norse word 'blautr' which means wet. 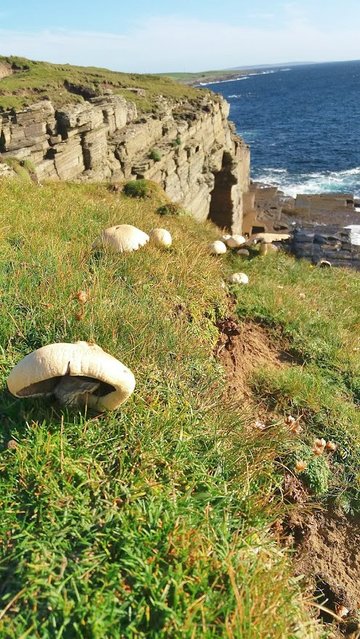 Mushrooms on the clifftop

Anyway, back to the walk. I kept to the left and headed straight uphill. There's a fence across the route a few yards short of the summit with a (small!) stile. I climbed this and then the uphill fence to reach the trig point where there are spectacular views over the whole of Orkney's North Isles. You'll want to hang around. 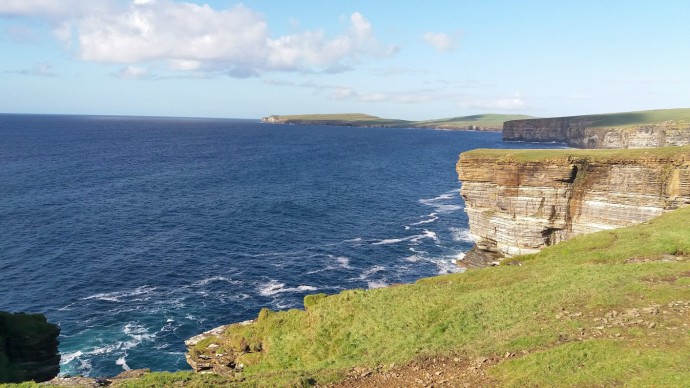 The south end of Westray from Fitty Hill.

From here you could retrace your steps to the cliff and continue the walk up to the lighthouse - highly recommended in May-June-July - but I was heading over two neighbouring hills to the village of Pierowall.

After coffee and a biscuit, I climbed back over the fence and headed roughly north aiming for Gallo Hill. There's a choice here; head to the left to pick up the fence line or drop down towards the farm at Lengiemire and avoid a lot of boggy ground. I did the first, meeting the fence near some rocks known as the Highlandman's Hamars - reputed to be where the final Lewisman made his last stand. The ground here is very boggy.

The fence meets a rough farm track which even in summer is waterlogged. I picked my way around this, followed the track for a short way to where there is some plastic pipe around the barbed wire and a couple of handily placed rocks so getting over the fence is easy. Once over the going became much better for the grassy walk up to the summit of Gallo Hill for more views and a pleasant look back to Fitty Hill and look ahead to the L-shaped Knucker Hill. Cairn at the top of Gallo Hill I followed the ridge around to the summit of Knucker Hill (views towards Noup and over Burness Loch to Noltland Castle and to the sea beyond). From there I dropped down and went to the right, turning away from the track and cattle grid, to meet a wall, climbing over the gate onto an overgrown track which eventually becomes clearer and after a few hundred yards meets the road. A short way along the road there's a track on the right which I took towards the waterworks, turning left where it meets another track to make my way down to the shore at Pierowall with the hotel and bus stop a few hundred yards along the road from there.

If you are coming out to Westray and don't want to bring a car, the island bus service will drop you off anywhere within reason. The bus meets all summer ferries and will meet ferries between September and May if you book ahead.

Now that's not a bad place to call your "local" walk!

Really enjoyed this walk when we did it, but would advise against it in the bonxie nesting season. They were fierce enough in August and can't imagine what they would be like in spring....well maybe you know.

Sgurr wrote:Really enjoyed this walk when we did it, but would advise against it in the bonxie nesting season. They were fierce enough in August and can't imagine what they would be like in spring....well maybe you know.

The bonxies and Arctic Skuas can be ferocious, but lately they have been nesting in ground around Skea Hill . Stick to the cliff path and you should stay out of most trouble and wear a hat just in case!