Queensberry rules - seconds out, round two!

Queensberry rules - seconds out, round two!

Donalds included on this walk: Queensberry


Yesterday had been a dreich affair on Hods Hill and plans to do Ballencleuch Law and Comb Law had been swiftly binned in favour of an early walk in to Brattleburn. The walk in was a fairly arduous affair, particularly the section over Craig Hill, due to the significant quantities of fuel and alcohol being carried. Craig and myself were feeling it rather more than Kev, him having been out quite a bit in December, while Craig is a much less regular visitor to the hills and I had been idle in that respect since early October.

We were joined briefly in the bothy during the evening by a family group from Beattock who said they were regular visitors but usually just popped in for a few hours to have their dinner and sit by the fire, before heading home again for the night. They knew all the forest tracks and how to get their vehicle fairly close to the bothy. They set about doing their thing in the other downstairs room, which generally involved a lot of shouting and feverish wood chopping activity! One of the guys was very keen to show off his new axe which his wife had given him for Christmas and which was so sharp that he had even been able to shave with it! Mmmmmmm!!!! Time for a sharp exit!

I declined the chance to spend the night sitting in an armchair by the fire as I had done on my previous visit and spent a cosy night sleeping soundly on the raised platform, oblivious to the activities of Kev and Craig who were up answering calls of nature and tending to the fire throughout the night. 
As is always the case with a bothy stay, the walk out in the morning was a pleasure in comparison to the walk in, with all that fuel and alcohol having been consumed. We made a cracking pace back to the cars near Middlegill and after a quick stop for some provisions in Moffat, were on our way up the farm road over Beattock Hill towards the parking area at Kinnelhead. 
And so for my second outing of the fledgling 2018. It was a glorious morning as we set out on the track towards Lochanhead and then up the tree line towards the Pot of Ae and onto Queensberry shoulder, in the shadow of the windfarm, a seemingly omnipresent feature of the Southern Upland hills. Kev and Craig on the track to Lochanhead Back to the Moffat hills across the M74 Start of the ascent proper Farmer on quad bike feeding his flock on the flanks of Peat Hill, snow covered Moffat hills in the background In the shadow of wind turbines Climbing above the Pot of Ae The good weather and views didn't quite see us to the summit, where we were enveloped in a bit of low cloud. We could just make out the faint shape and shoreline of Daer Reservoir off to the north and parts of the route into Burleywhag that Kev and I had taken a couple of years ago, but that was about that. Not enough strength in that January sun! 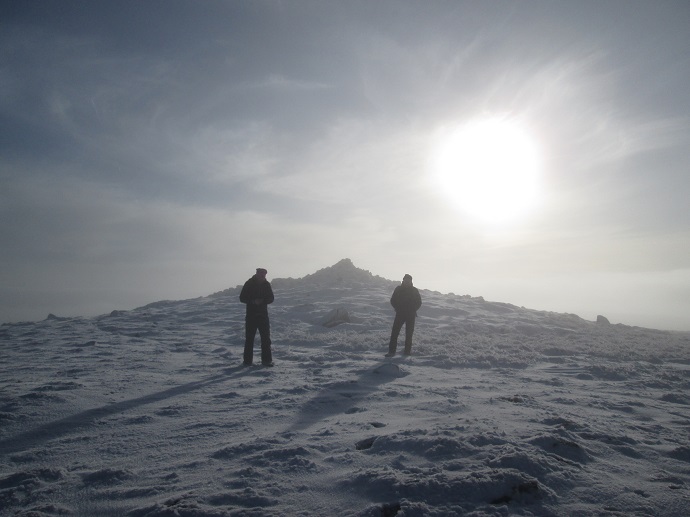 In the interests of a varied hill diet, we took an alternative descent route, heading on a more north easterly bearing to skirt Mount Glass before descending through the valley towards the little lochan of Brekeney Hole, where we picked up the track back to Kinnelhead. I can vouch for the bog on this route

You were lucky to be doing it with the ground a touch harder than when I did it. It's a good alternative route though from the larger circuit from Mitchellslacks.

Looked nicer than Hod's Hill, that

. I quite liked Queensberry, but was less impressed with the rest of the Daer hills. Probably my state of mind more than anything else. A visit to Brattleburn would certainly improve things though - sounds like a good weekend

Good result and an interestingly different way to approach it.

Won't forget the peat hags on the other side in a hurry as I needed strong anti inflammatories after badly straining my right leg clambering out of one.
Often think the southern hills down here don't get a lot of press but many do make for good walking with some rather varied terrain - cheers