What can I say about the title? Following a glut (okay three

) of my own trip reports with non catchy titles, I wanted to do something different. The first part of this one kind of rhymes. But doesn’t. As my High School reports used to say: ‘Semi bright lad – must try harder.’ Anyway, to business. The walking template waits for no man.

This is a walk I’ve done once a year for the past 6 years. I’ve yet to catch Broomy Law in good weather. I’ve picked the 2017 date for this report because this was the most recent example.

My start point was the A721. Turn east off the A702 south of Dolphinton and the first house on your left is Lochhead Cottage. This is home to ‘Animal Paw Prints’, boarding kennels. We sometimes use it for our dogs. It’s a pleasant enough place. 1k and a bit further on, the road bends sharply to the right and drops beside some forestry. To the left is Southhill Wood. It is accessed by one of two tracks. The first has an old single metal barrier across it. Invariably this is padlocked. The second –just a few yards further on- is guarded by a gate. Signage here suggests littering is a problem. Beyond that is a small lay-by suitable for one or two cars (GR099444) 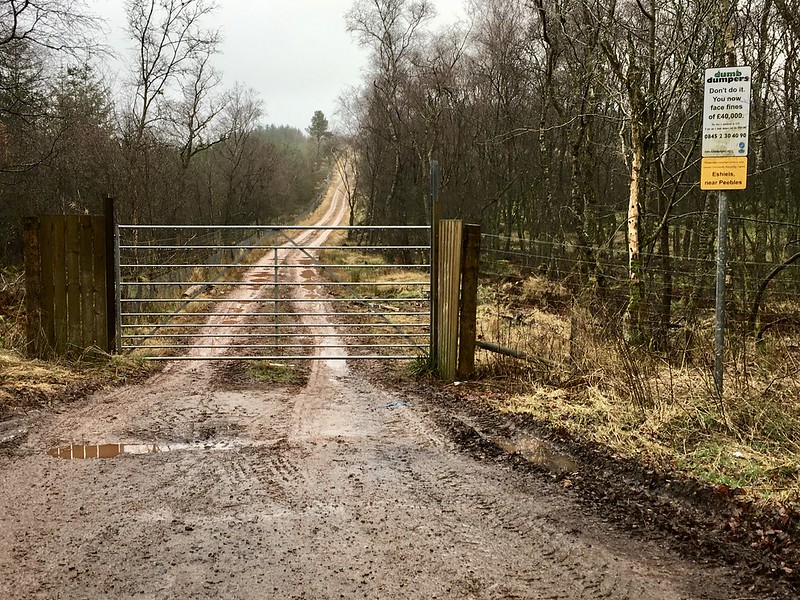 So why start here? I can think of three reasons.

First, I’ve never been taken with the trade route up Broomy Law from Candy Mill. There’s the road walk to begin with. The A702 north of Candy Mill is home to what must be Scotland’s oldest ‘temporary’ traffic lights. I can’t remember a time when they weren’t there. I also can’t remember a time when I’ve ever seen anybody working at them. Perhaps they’ve been forgotten from a job in the 1970’s?

Whatever the case, I drive this road often and it seems to me impatience causes cars to set off from them through Candy Mill at higher speed than they otherwise might. The A702 has reasonably high volume traffic anyway. There are few footpaths and the verges are narrow.

Second, the A721 start point makes for a steady, gentle ascent. If you have one, your GPS Unit will barely register it in 3 figures. It’s pleasant though and the walk gives good views north to Black Mount and south to Broughton Heights.

Third, it’s hard to go wrong. The entire walk follows the fence-line that divides South Lanarkshire and the Scottish Borders.

Which isn’t to say that this route is perfect or free from hazards either. There are two issues.

Here’s the first one. You need to cross the road, aiming for a track on the opposite side that cuts into a ribbon of forestry. Straight across and you’re walking on a blind bend. (Which is the only reason incidentally I’m recording this as a private report rather than a public one.) Your best option is to go either east or west to a position of better visibility, cross the road, and then retrace your steps to the track on the opposite side. Make sense? The good news is that 10 feet or so of tarmac is the only road safety consideration you’ll have.

The track on the south side of the road (sometimes used for parking by locals) quickly takes you to a metal gate. As gates go, this one’s seen better days. This is sheep country and its usually tied shut with rope.

Next gate - the one to the hillside 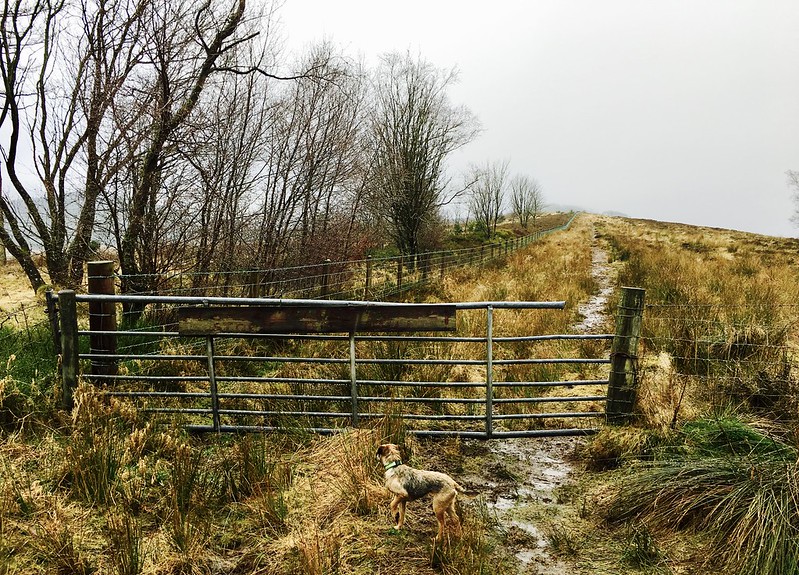 Over half of the walk is now visible in front of you. It’s just a case of following the right-hand side of the fence. And here’s the second of the two issues I mentioned. There are various paths, animal tracks and ATV markings for the first section of the walk. Which is fine. Except for the fact that the ground can be boggy. Very boggy. Heather and gorse soak up water. Tracks and paths scrubbed bare don’t. At least not here. The ground doesn’t drain well.

The fence eventually arrives at small hillock topped by old pines. The trees stand roughly in a small semi-circle. You might see similar at old country cottages when they were planted as windbreaks. Maybe there was a house here at one time? If so, it’s certainly not evident now. Interestingly (for me at least) the trees on the other side of the fence form part of a new plantation. Old trees in Lanarkshire; new ones in the Borders. All within the space of 15-20 feet. Was one of the Councils trying to make a statement?

On route to the tree-topped hillock 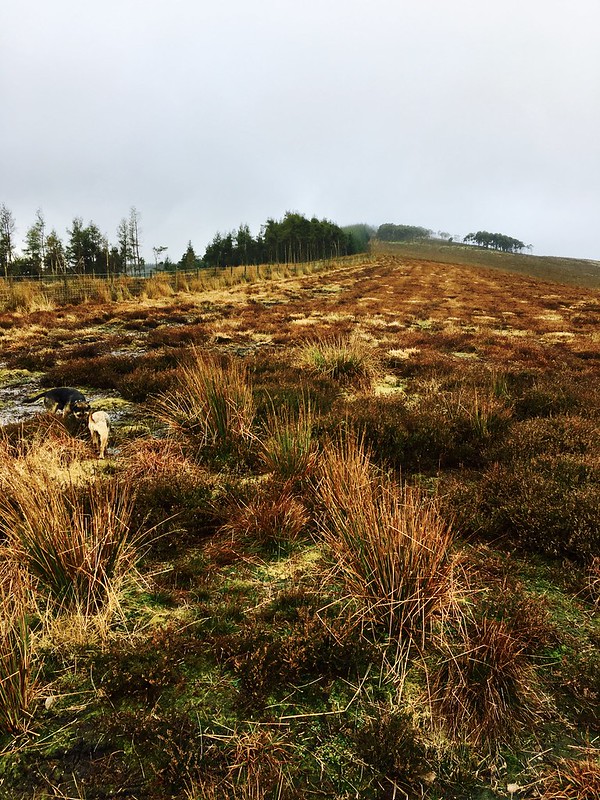 You’ll then come to 2 gates situated at a five way junction of fences. That sounds more complicated than it is. Let’s call it: Two Gates, Five Fences Junction. 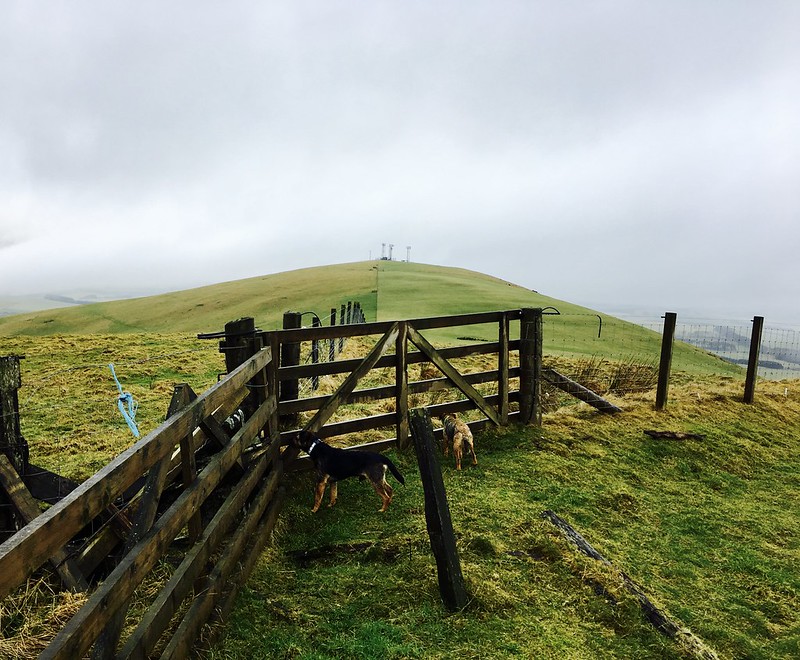 
The summit of Broomy Law, complete with its three masts, is now visible beyond. Press straight on, still to the right-hand side of the fence, go across a dip in sheep pasture, through another gate, a gentle ascent, and you’re there.

One cautionary note here is that the top strand of the fence on your left switches from barbed wire to electric fencing at Two Gates, Five Fences Junction. 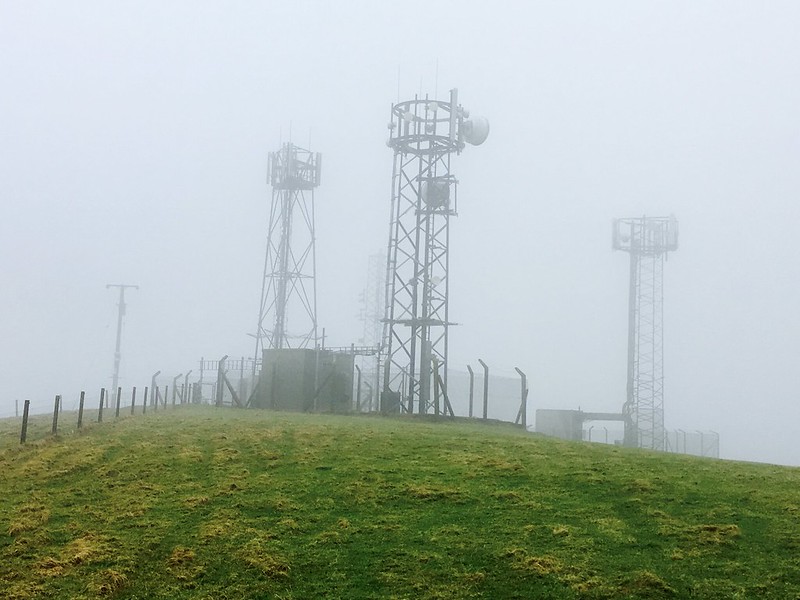 Normally the views from the top are decent. Broughton Heights looks bulky and impressive to the south. The nearest neighbour to the north is Black Mount at 516m. (As you’ll gauge from the last photo, the weather prohibited seeing them today.)

The local Council must have read my report. Happened to travel through Candy Mill the other week and the temporary traffic lights have gone. Vanished. No more. After all this time. No matter, it doesn't substantially alter my opinion about this choice of route.