Every so often (or once in a blue moon……..) I get a day which reminds me why I walk the hills. As I left Aberfeldy at just after 8am with a very grey looking low cloudy sky not dissimilar to the day before on Carn Gorm and its neighbours, I didn’t think this would be one of them. This was reinforced as I started up Meall Greigh, the mist rolled down off the hill and, as yesterday, it wasn’t long before I couldn’t see much around me………..how wrong was I about to be proven.

GPX of my track is truncated as there were too many trackpoints:

25 MGreigh_MGarbh_AStuc_activelog 11oct2010 trunc.gpx Open full screen  NB: Walkhighlands is not responsible for the accuracy of gpx files in users posts

I drove down to the Ben Lawers Hotel where walkers can park in the lower car park on the understanding that they buy something in the hotel later (the charge is £5 for non customers). I then walked back up the main road to the horn carver’s house where I started up the track to Machium Farm. I think normally at this point Meall Greigh can be seen but not today with the low cloud.

The track follows up past the farm with signs to keep walkers on the right path. Just past the farm there’s a wee bridge over the burn where I turned left and headed up the track which is clear and easy to follow. Further up just after I was out of the woods, I crossed the fence by a stile and was then in more open ground. There was still a track but I then left it to head more northwards towards Meall Greigh. There were myriads of vague tracks but essentially I was following the route I’d previously decided. I could see Sron Mhor to the NE but it rapidly disappeared in the mist and low cloud which was rolling in - that said, there was no rain and hardly any wind at all. The lack of features and the thick mist made navigation a little tricky. Further up I moved away from the Lawers Burn and headed northwards staying not far from the burn which flows down from north of Sron Mhor. The mist and cloud had closed in and I could hardly see ahead at all. The sun was trying to break through but without much success until suddenly I was clear of the cloud - clear blue sky and full sun – an amazing cloud inversion. I could clearly see the upper reaches of Ben Lawers above Lochan nan Cat, An Stuc and Meall Garbh emerging from a sea of white cloud.

Looking backwards I could see another two peaks which I think were Ben Vorlich and Stuc a Chroin. The weather had completely changed and I could see two deer further up Meall Greigh. I headed on north directly up the hill which was easy going under foot but steeper towards the top. 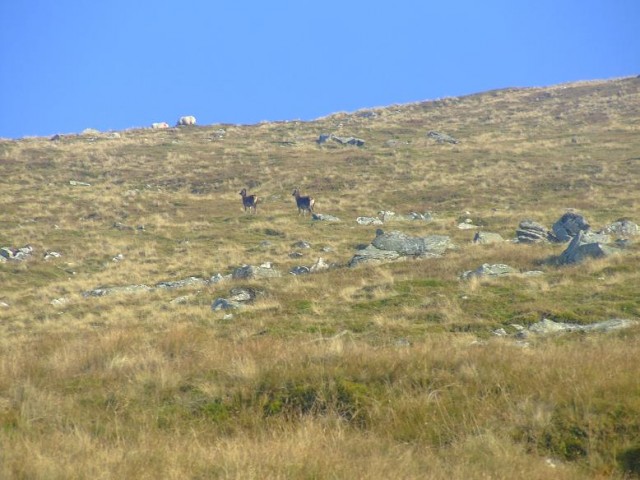 On reaching the top I couldn’t believe the sight - blue sky, full sun and a clear view all round of the hills as far as I could see all emerging from a sea of white cloud and mist. I don’t think I’ve ever had a view as clear as this before - and I couldn’t have dreamed it would be like this given the earlier weather conditions. I stopped for quite a while to take photos in case the weather turned again (but it stayed like this all day). The mist and cloud had started to recede a little and by now it was down to just below Lochan nan Cat. With a clear view of Meall Garbh, I headed off down the clear track westwards down the very wide ridge to the bhealach before climbing upwards along the side of a fence. The path gets boggy at the bottom and remains so for the early stages up Meall Garbh. At the top I reached a cairn and then walked along a very short ridge to get a clear view of Ben Lawers. I then walked back to the cairn and on along the track to a second cairn which I think may have been the true top as it was a few metres higher than the first cairn (according to the gps).

Looking back to Meall Greigh I could see the cloud still coming fairly high up the hill side. 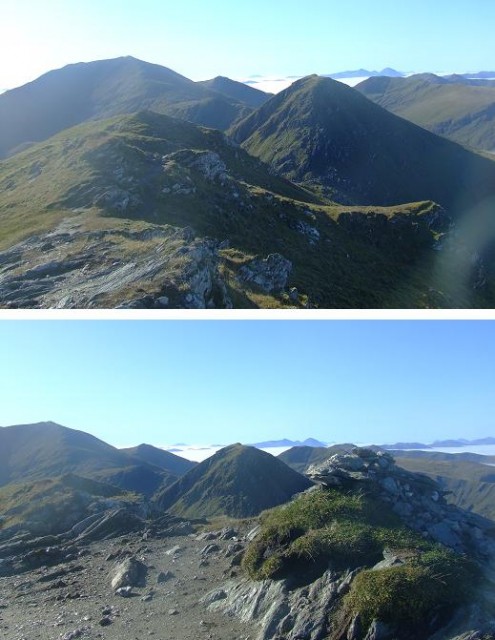 From the second cairn I had a clear view of the third hill of the day, An Stuc - which looked worryingly steep and craggy. I also has a good view of the surrounding hills including Meall Corranaich and Meall a Choire Leith and beyond to the west. Heading further along the track at the top of Meall Garbh I started to get an even better view of An Stuc which now looked even more daunting. I followed the good track SW down and round to the left to the start up An Stuc. At first the track wound its way up the side of the hill and, although steep, was not too difficult. However, further up I had to start scrambling before getting to a point where I opted to go to the right rather than left. Unfortunately it got steeper and steeper until I couldn’t really go any further; I went back down a few yards then round to the left where I picked up a scrambly, loose stoned path which took me to the top. The track is covered in stones which are loose in many places which means that I had to watch my step and pick which stones/rocks to rely on carefully but this didn’t really last long before getting to the top. Once again the views all round were fantastic and very clear. There was still a lot of cloud around although it had receded a little more. I stopped for more pictures, some lunch and to sit in the sun and soak in the views for a while. 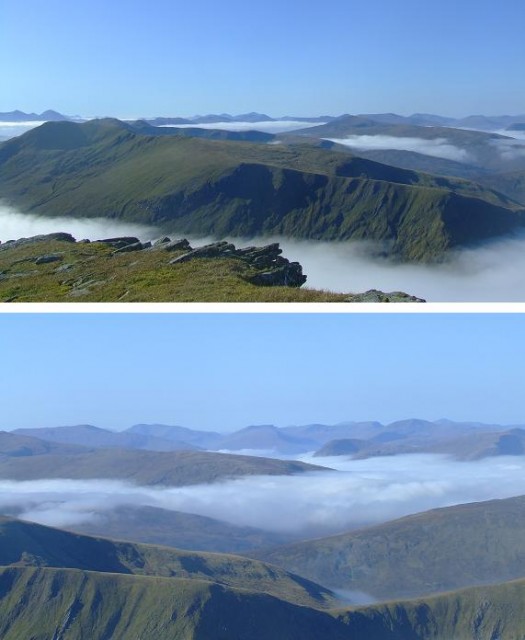 By this time my total stoppage time was just over 2 hours (about an hour longer than planned) and I had to start the descent as I was expected back by late afternoon.

Initially I followed the track down An Stuc to the foot of the climb up Ben Lawers (just before Creag an Fhithich) and then turned eastwards to follow the burn which runs down to Lochan nan Cat). There were faint tracks here and there but it was easy enough to follow the burn over soft moorland until I got closer to the side of the lochan. From there it was a straightforward walk just up from the side of the lochan over boggy, peaty ground until I got to a small dam in the upper reaches of the Lawers Burn. At this point I started to follow the landrover track which headed SE then SW but soon decided that I didn’t like the thought of a walk back to the car along the main road at the bottom and instead headed east to rejoin the Lawers Burn.

From here I followed the burn down SE until I rejoined my original starting track and the walk back to the car at the Ben Lawers Hotel. I was about an hour later than planned but this was due to longer stops for photos and enjoying the views. Boots off and into the hotel to make the necessary purchases, I then headed back to Aberfeldy after a day of which I could not have dreamt given the weather at the outset.

We had very dreish weather for Meall Greigh and Garbh so didn't really see any of that. Your day ended up really nice though - some lovely photos there

Lovely pictures,i have still to do these.Fingers crossed for a repeat of your weather.

Yes, the panoramas of the cloud inversions are fab. I too had to take two stabs at An Stuc - I guess this is where having walking partners really helps.

Thanks for the comments guys. My camera doesn't have a panorama setting so I'm experimenting with using a fairly straightforward "panorama plus" program from serif and then editing with MS paint - seems to do the job OK.

amazing pictures...i was on the grey corries on the same day looking south and could see the cloud in the valleys thinking that some lucky south will be climbing through the clouds....there was no cloud at all on the grey corries that day but inversions noth and south!!!!

if i could work out how to load pictures i would load one taken looking at the cloud in the valleys around lawers!!!

thanks guys - but looking at kinley's latest report, I think I need some lessons in photography