I had fancied a wander round the bonny woods of Perthshire for a while - I go there a lot for work, but never any time for exploring.. Easy paths too by the looks of it, and with ankle playing up the last couple of months, looked manageable. Left early-ish and got to the Garry Bridge car park before 11.


Pitlochry 11 1 18.gpx Open full screen  NB: Walkhighlands is not responsible for the accuracy of gpx files in users posts

Nice stroll round into Glen Tummel, the trees round there are stunning, and the couple of miles along the road were sublime - cold, crisp and sunny

Lots of sticks with jack frost's hair about - fascinating phenomenon. 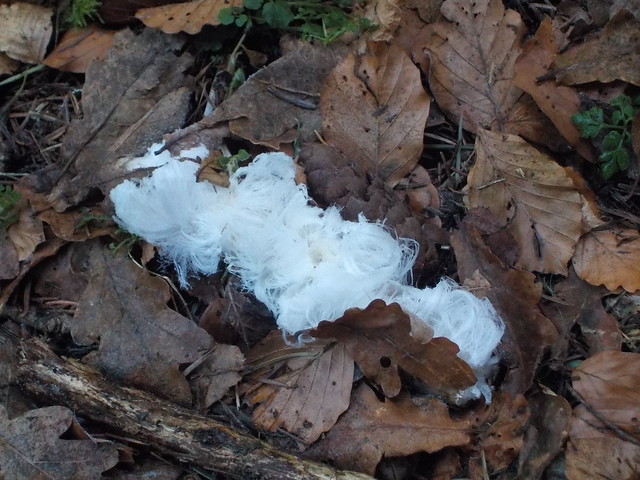 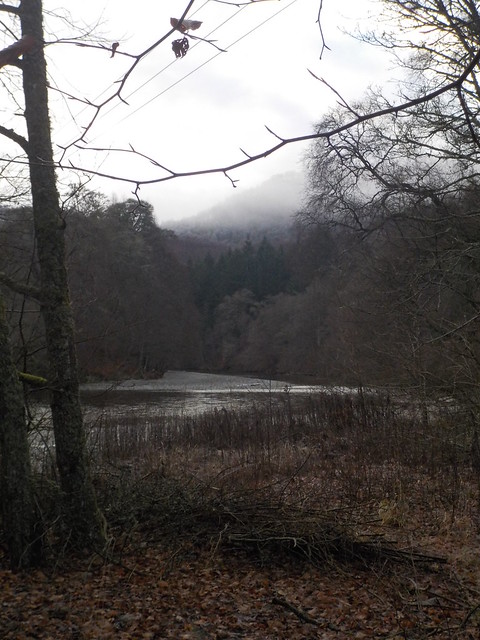 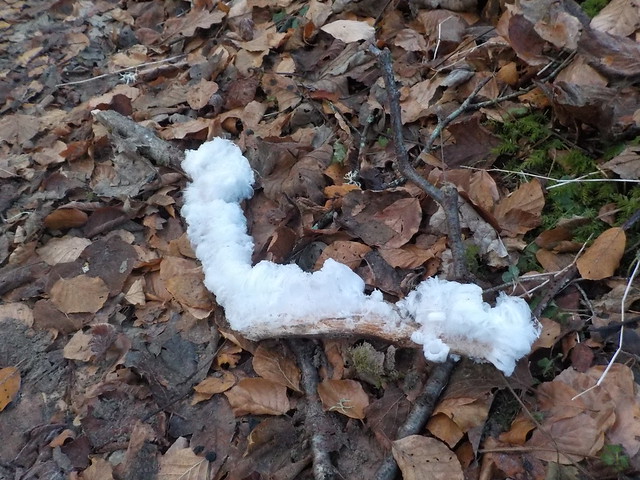 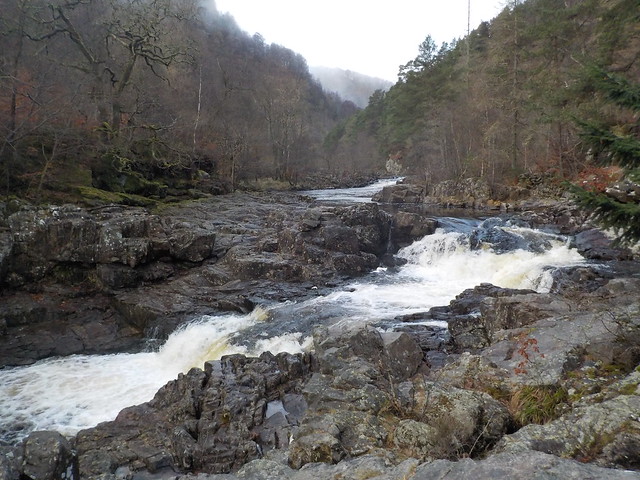 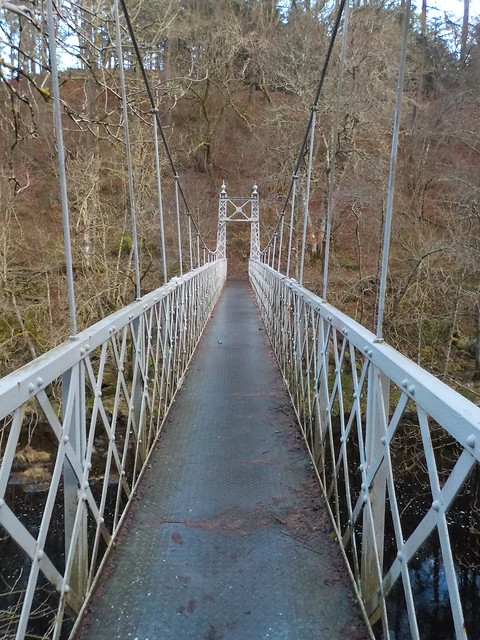 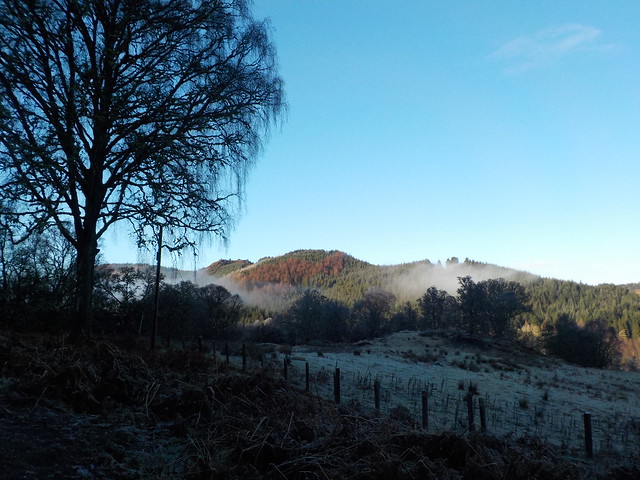 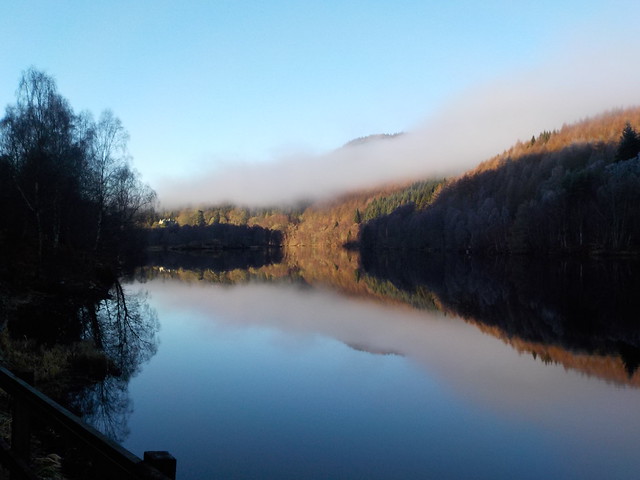 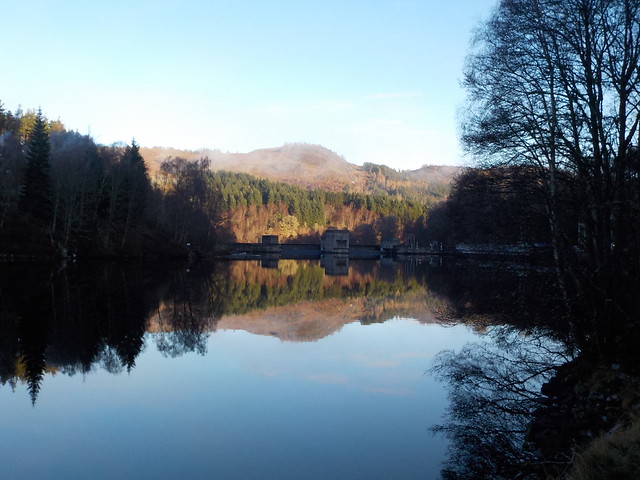 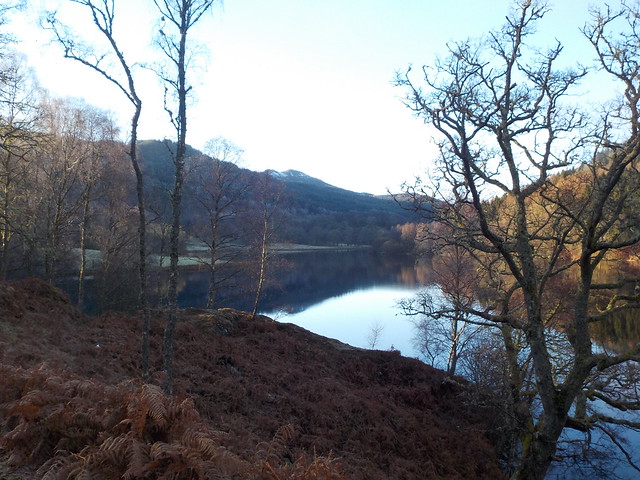 I turned up from the loch on a track which the map said would take me up to Farragon Hill which was my vague target for the trip. Once up above the woods it started getting snowy though. I was so intently following a set of footprints, I ended up on the wrong branch of the track - the turn off had not been obvious under the snow 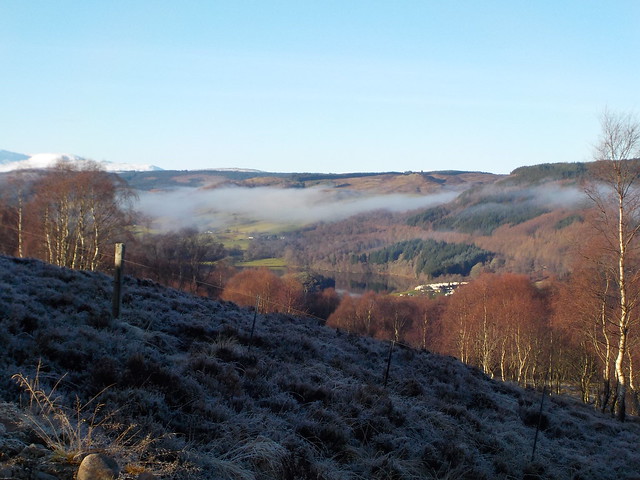 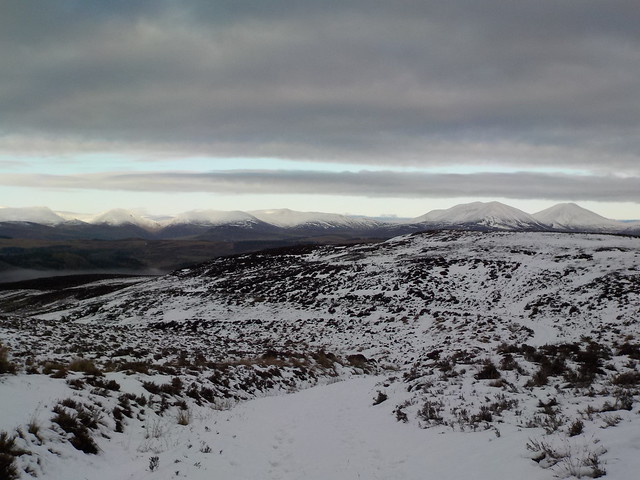 It was an easy mistake to put right - a couple of hndred yards cross conveniently burned heather. Not far up the track though, the snow started getting deep - mid shin, with drifts thigh deep

There had been footprints to follow, but the people involved turned back a bit further on and I was left to forge a path through the snow myself. Sometimes I left the track for a while, but knee deep heather with a few inches of snow, was just as wet, cold and energy sapping as knee deep snow as it turns out.. 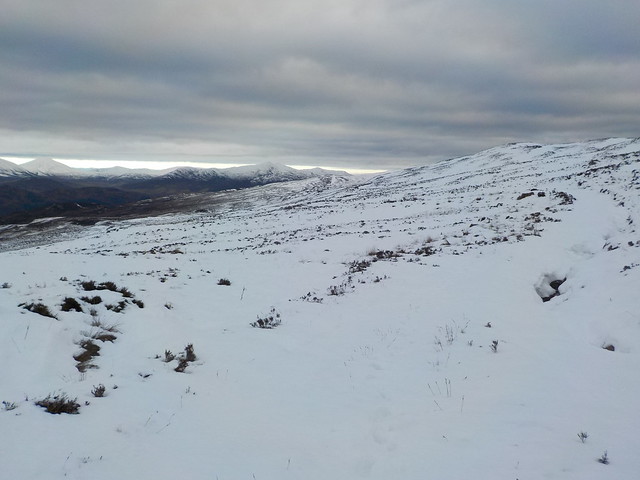 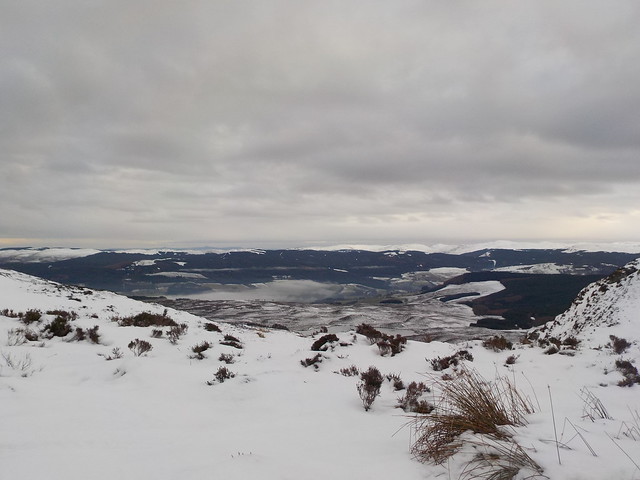 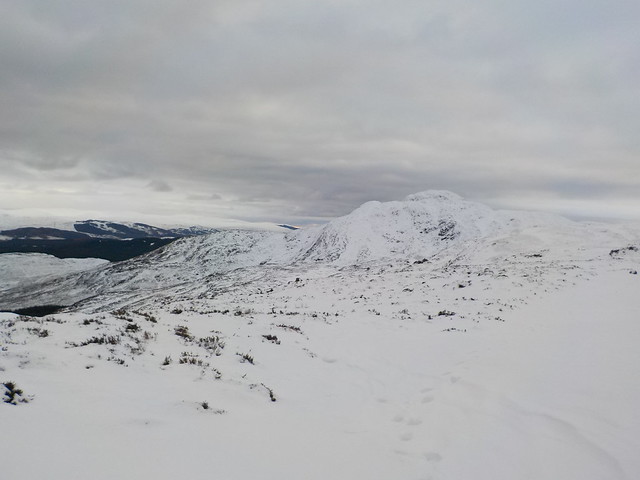 I could see the track climbing up further ahead, and I contemplated heading back. It was such slow, hard work - waist deep half the time now, but when I looked at the map and saw that I was only a mile from the top of the pass, I decided to go on. A couple of hundred metres up the road, I found the footprints of someone who had been over the pass

That was encouraging, that meant I could get over, and the trail was broken already

The time the snow had cost me, meant that farragon Hill was out of the question before dark, so I carried on down the track, meeting a herd of coos along the way - they thought I might be feeding them so tried to follow me - I quickly made my escape over a stile 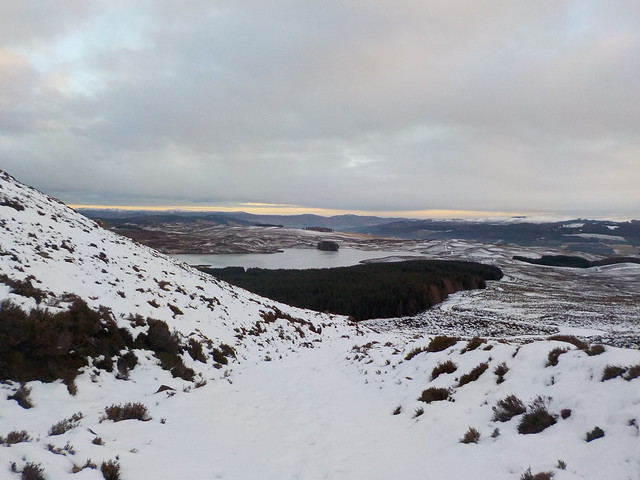 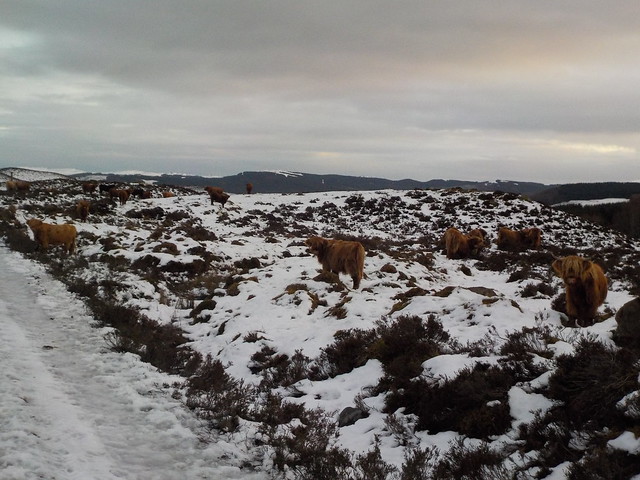 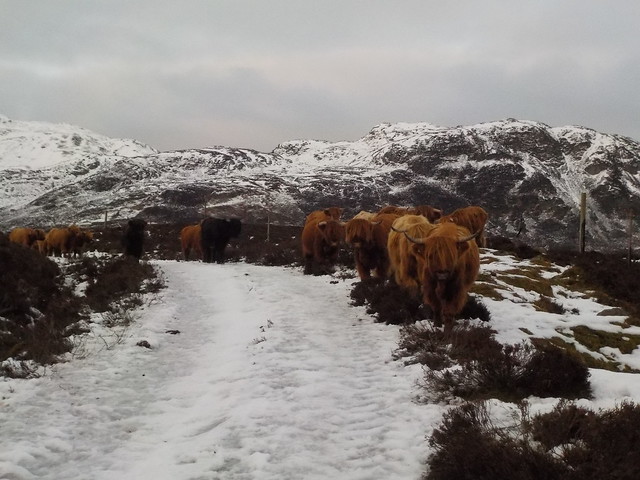 Just a short walk took me to Loch Derculich - the sun was setting and it looked unlikely I would find a non-snowy camp spot before dark, but what luck! An open fishermans bothy - Had a few planks missing and a rotten door, but someone had lined it with plastic sheeting and left the biggest supply of candles I had ever seen. Lots of mice'evidence' about, but would do me just nice. The only stream I could find, only had slush puppy consistency water, so every cup of tea took a loooonnng time..

The morning came after an epic sleep, and I found it to be claggy. I left about 9.30, heading eastward - there were lots of tracks up this hillside, but none of them really joined up, which meant short sections over the open hillside - was fun finding the way in the swirling mists. 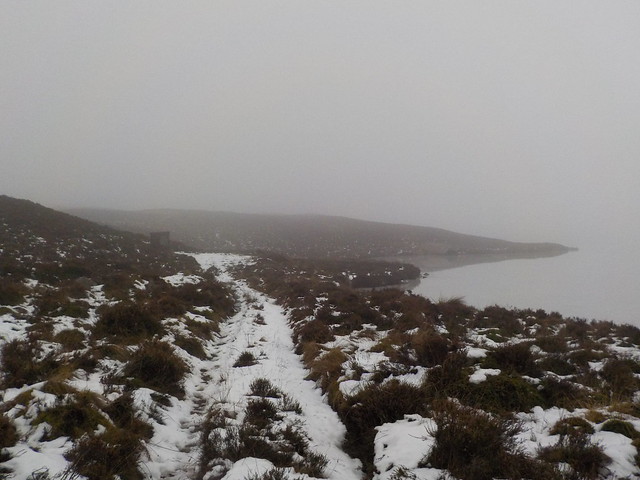 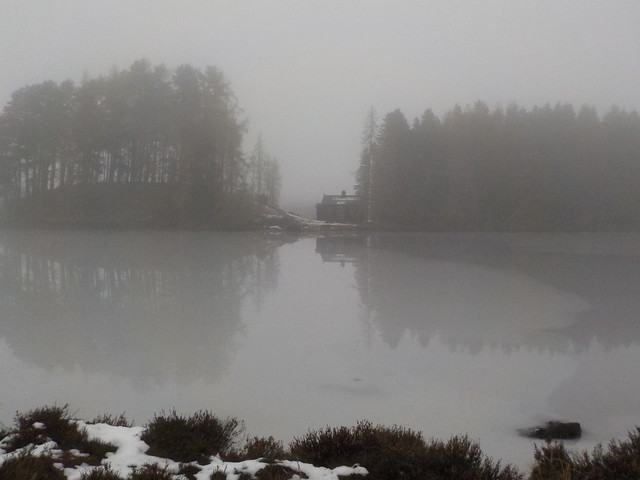 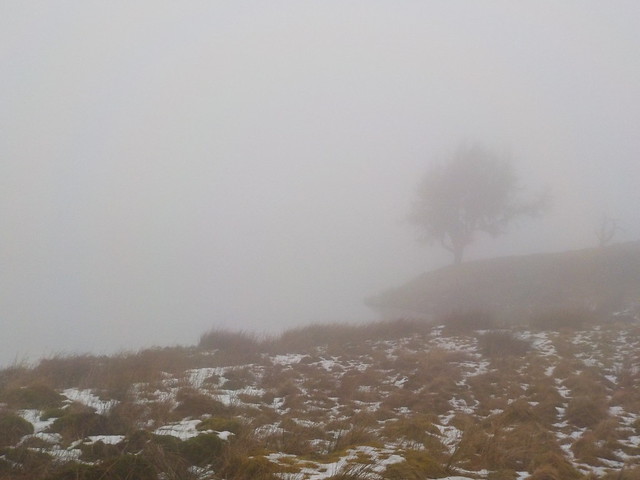 I got on the right track eventually, and down to Brae of Pitcastle - It looked easy to get on to the Rob Roy way from here, which would take me back over to Pitlochry, but it was a bit tricky. Eventually managed through fields and onto the right path. The day was far warmer, and things were thawing out a bit. Not good for the RRW path - boy is it muddy

Lots of sections through overgrown Gorse too, so felt like a pincushion a lot. 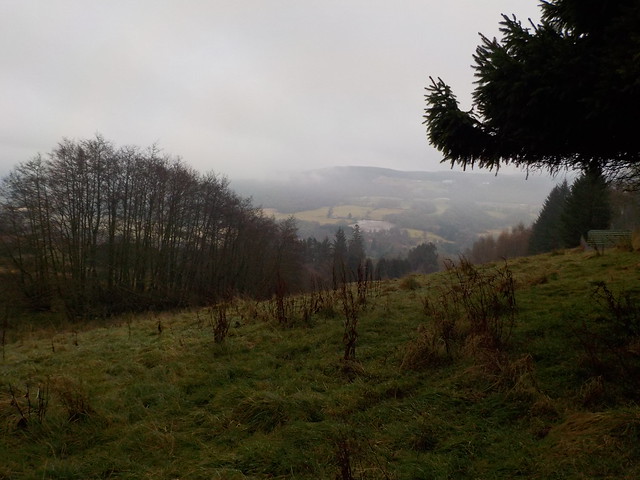 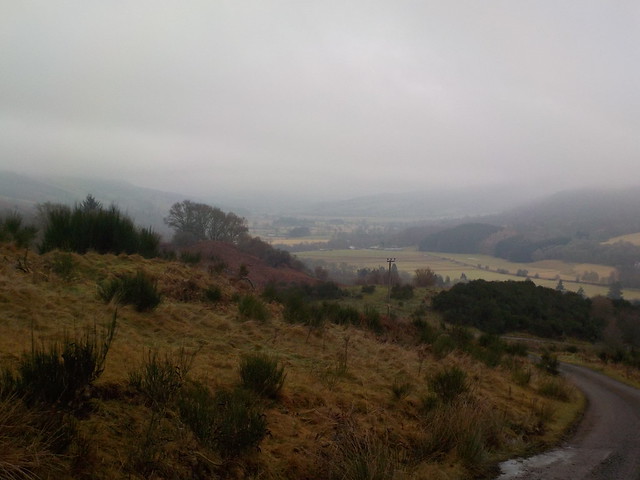 Eventually the path led into a forestry plantation, and down to Pitlochry. I crossed the Tummel at the Dam and walked down the far side of Loch faskally - Back on the beaten track 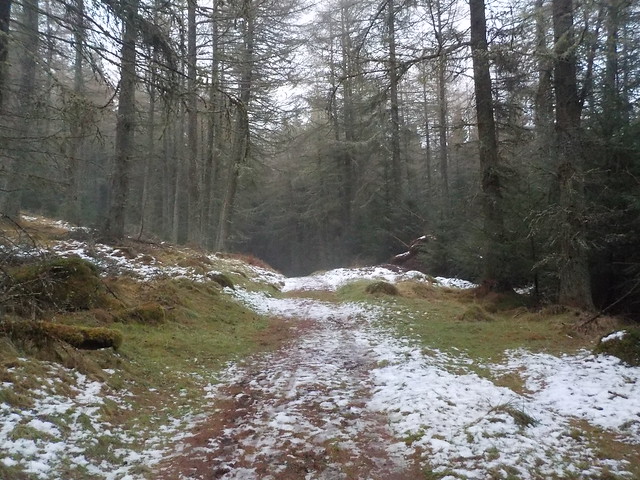 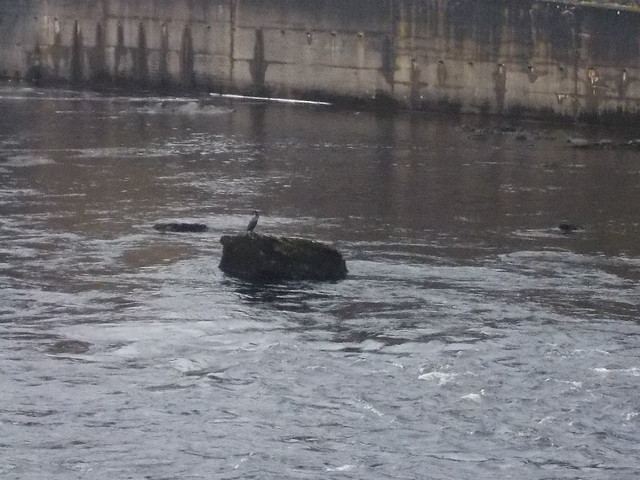 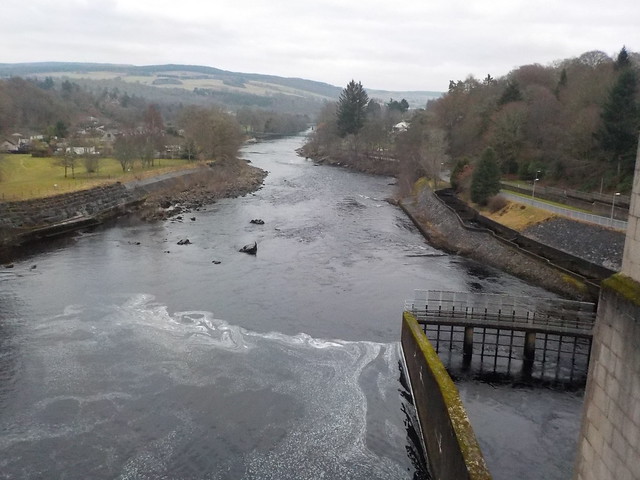 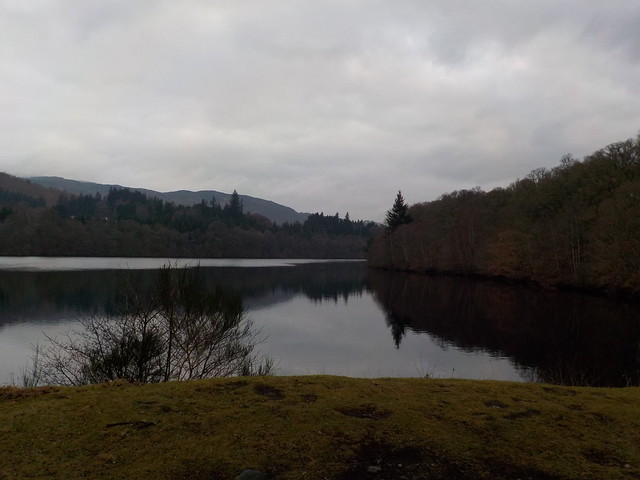 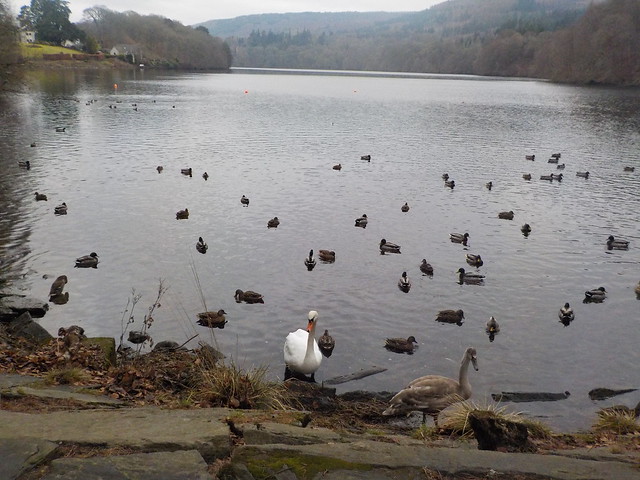 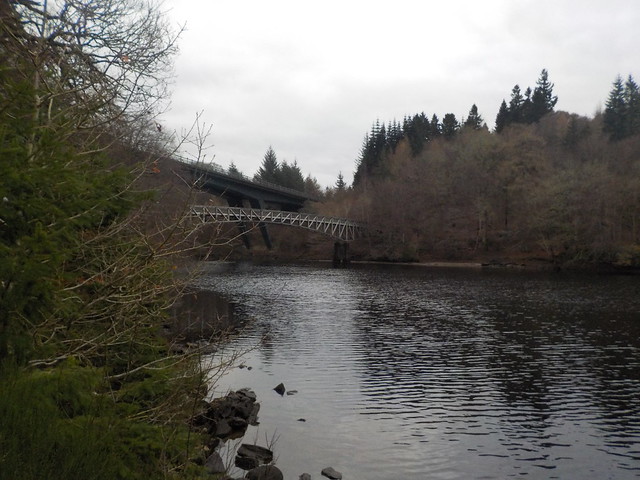 DSCN4085First bridge in Britain to be made out of Aluminium alloy

Was an easy walk along the river back to the car for about 3PM. It was a decent walk - had a bit of everything

A grand day oot as you would say BC

ancancha wrote:A grand day oot as you would say BC

Aye, scratched and dented but kiddycam still doin the business

That was lovely - and good to see a report from you as these days I've been missing some of the old names on here. A few years ago we had a holiday cottage at the foot of Farragon Hill and I kick myself now I never took the chance to climb it. Went half way up for a dog walk and saw an osprey's nest on the top of a pylon... quite a smart place to build it in terms of safety from the public!

that looked like a proper murky morning for navigation practice!