Three user reports and the map all mention the expanse of bog around the bases of Ben Griam Mor and Ben Griam Beg, so they may not be the best destination for the middle of winter. On the other hand I spent some years living in Scarfskerry, which is a pleasant crofting village built on land so waterlogged that Caithnesians happily sold most of it to the English back in the days when "English" was spelt with three Ss.

So bogs don't put me off like they used to.

Coming from the northeast meant that the most obvious approach involved the track to the house at Greamachary, which goes over a "private" level crossing a few miles south of Forsinard. Some digging around Network Rail's site revealed that the crossing was still open and in "frequent" use, but didn't mention the "authorised users only" sign whose brothers have been discussed enough already on this site. In any case, the actual walk starts from where I parked my bike near Greamachary, and there is more than one way to approach it regardless of how authorised you feel. For what it's worth the track is well maintained and well-used, and its two wheel ruts were largely filled with thick, smooth ice.

This trip was intended partly to check out the land and the route there - I wasn't sure how many peaks I'd be able to reach, especially after a slower than expected outward journey left me starting the walk around 12:30. I decided to play safe by starting with Meall a Bhuirich. There was a liberal scattering of thin ice and many small patches of snow but I was surprised how easy the going was. The ground beneath the ice was squelchy but firm, and this pattern held for the entire route. Maybe the ground had had time to drain, since it hadn't rained for a week or two and most of the snow had stayed on the hills. There was a steady 20mph wind blowing from the south, which was quite bracing on the hilltop. B. G. Beg behind Bhuirich cairn

After deciding there weren't any great lunch spots nearby, I set off towards Ben Griam Mor. On the way to Mor

I was amazed at how sheltered this valley was: All the way across, the wind was much lower than it felt for the rest of the day. There were a few deer ahead, skipping across the marsh and the burn as if a kilometre of bog was just a short garden path.

Allt Airigh-dhamh was more of a barrier to my less graceful legs. I followed it upstream for a few minutes and found a loop that was shallow enough to ford, with the bonus of a steep, north-facing sand bank on the other side. A perfect lunch spot, sheltered from what was left of the wind. After lunch it was heading towards 3pm so I faced a decision: Forge ahead or go back? I'd already had a fine outing and would be well prepared to come back to the Griams another week. I did not relish picking my way across bog, ice and burns in the dark, and if I turned back now I'd be back to the bike in daylight, making it easier to find, and then knocking maybe half an hour off the trip back to the road. I decided to do the sensible thing and headed on to Ben Griam Mor. Somewhere along the way I scared up a pair of grouse.

The shortest route to the peak went from a walk to a scramble over rocks and heather. I avoided some snow patches and went carefully across others - some of them hid deep holes. I'm normally OK with heights but the side wind made things interesting, especially where the vegetation was short. The scramble ended on a shoulder, with what turned out to be a second shoulder on top of it. Here I guessed the wind to be about 40mph, rising to around 60 at the summit.

Once at the top I was glad to reach the cairn. I remembered Rob Munbett's report commenting on the comfortable shelter, but unfortunately the wind was blowing straight into it and it was full of snow. Still the other side was a welcome break. At first I thought it would be best to avoid the wind by going down the north side. All I could see of that side was covered in snow, and it occurred to me that if it was smooth all the way down, that could be the longest slide of my life! Unfortunately I didn't know what that side was like, other than steep, and didn't want it to last for the rest of my life. I'd originally planned on the south side and knew what it looked like, so I faced the wind.

There was a fair bit of snow on this side too, so I got to slide down a few sections. Finally I understood the real reason people walk hills in the winter! 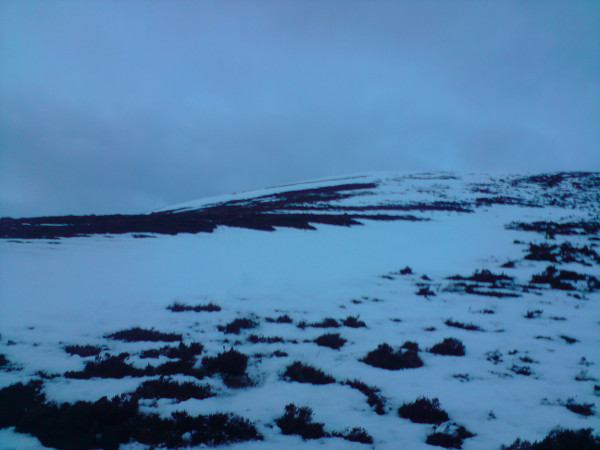 From the arm of Mor I turned back, using the same ford as before. The light was fading and Beg would have to wait. By the time I'd crossed the arm of Meall a Bhuirich it was getting hard to spot patches of ice. I could see two lights across the strath, one of which might have been a rail signal. After hitting the deck for the second time I turned on my torch, making a third. I wondered if one of the others was a house, and if someone was looking over and wondering what idiot was walking across a bog on a January night.

Finding my parking place wasn't too hard, but I was right about getting back to the road. It was a fair walk in the dark. The going was easier though, and I turned my lights off and enjoyed the isolation. I heard a distant bird call somewhere on my left which was answered from some reeds immediately to my right, then all was quiet again. Since the last ridge I'd seen one train and one or two cars in the distance - aside from them I was all alone, more or less, since the start of the walk.


ben_griam_mor.gpx Open full screen  NB: Walkhighlands is not responsible for the accuracy of gpx files in users posts