Climbing Ben Gulabin had been in my mind for years. From my earliest holidays in Scotland, I had fond memories of visiting the Spittal of Glenshee inn, above which the hill looms unmistakably. The 'Chieftains' Candlesticks' story above the fire place, the assault course in the garden outside - I'd even celebrated my 100th Munro (Glas Tulaichean) with a meal at the inn. Sadly, it was razed to the ground by fire in 2014. However my intention to climb the mountain remained and, after a New Year's Day ascent of near-by Creag an Dail Bheag, only a week later I was lured back out by another fine weather forecast. It was after midday by the time Emil and I set off from Banchory up Deeside. The hills were blanketed white as we headed south from Braemar, the ski area as busy as I'd seen it, but the lower glen beyond the pass looked disconcertingly snow-free. We parked beside the entrance to the Old Spittal Farm and set off with an appetite to get back above the snow line. The turf was frozen solid as we began across a grass field, through a gate and quickly onto the open hillside. After an initial steep section, and a brief descent to retrieve a misplaced trekking pole, the ridge broadened out and the gradient eased. A line of tracks gave away a large herd of deer before we saw them fleeing westwards out of sight. We crossed the snow line to observe half a dozen mountain hares, huge looking ones, skipping away over the horizon. The softening effect of the hazy winter sunshine clouding our sense of scale, perhaps. Or a new genetically-engineered super-breed. We'll probably never know. 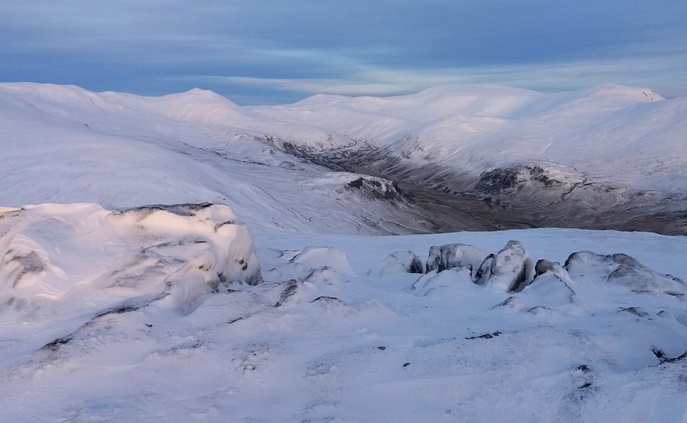 The expansive summit area isn’t perceptible from the classic postcard view of Ben Gulabin. However, in these conditions, the chance to linger amidst the crunching snow was relished, with time taken to soak in the views of ridge upon ridge of unblemished white. Hamish Brown's "Climbing the Corbetts" is the best reference book on the subject, and his description of how Glas Tulaichean "lorded it in the west, the big corrie towards us”, was apt for the day. The hills on the south side of the glen carried a prominence that defied their failure to make the Corbett grade, although as Hamish describes, Meall Uaine was once assigned that esteemed status, only to lose it when a re-survey found it shy of the 500 foot threshold. We reached the summit as a biting cold breeze picked up, -6 clocked on the thermometer, where a paltry cairn offers no real shelter. However I donned a fleece intent on dawdling in the dying rays of the sun, and we stoked our spirits by toasting the ascent with a bottle of ‘Ridge’ beer, a recent Christmas present that couldn't have been better savoured anywhere else. Over-filled chicken tikka sandwiches were a challenge to eat with half-frozen, gloved fingers, but it was all good fun. We set off back down the ridge with an orange glow behind the silhouettes of Ben Lawers, Ben Vrackie, Stob Binnein and Ben More. Twilight took over, draining the scene of colour but for the pink-flushed clouds, along with a stream of red lights from cars returning southwards along the A93. The descent was short and sharp, allowing headtorches to remain in our rucksacks, with trekking poles well utilised in the bid to stay upright. We returned to the car 3 hours after departing, satisfied with a fine afternoon of winter walking. Great photos and a reminder we must do this Corbett the next time we're in that area. Maybe not in the snow - though I'm sure that's when it looks its best!

Glenshee has the fattest mountain hares I have seen

ancancha wrote:Glenshee has the fattest mountain hares I have seen

Could've sworn the ones we saw were about the size of dogs. Given the pace they move at I wouldn't want to be in the road of one of them