Like most of the hillwalking fraternity I had been studying the weather reports for the upcoming weekend. Saturday seemed the only option, a seemingly "still" day amongst the winter storms. My first option would have been a 2 day raid on The Donalds as I'm keen to get into Glen Afton and maybe use Clennoch bothy but a study of reports and seeing locals FB entries regarding the amount of snow lying in southern Scotland it was a non starter, so a visit to The Lakes was arranged and maybe a chance to use the axe and crampons.
Pick up was made at a local station and it was en route across the A69. As usual no definite plans were made and it was a case of choosing en route. If the snow had been bad down low I would just have chosen something roadside. Getting to Penrith area I was surprised how good the roads were and it was straight down to Borrowdale. Quite surprised how many cars were parked up on the lane and surprised how many chose to bury their cars in the deep mud verges

I was with a mate, Steve who is unaware of how many Wainwrights he has done as they are spread over a lot of years so he has started them again. I had been on Scafell Pike on boxing day so didn't want to repeat it so opted for a different circuit perhaps not one people would immediately think of.
First off was the route along to Stockley bridge and then the ascent up towards Styhead tarn. When we got past the site of the former huge cairn that I was always told was the 1000ft marker we headed straight off up the rake that leads to Seathwaite Fell. I included this in his round as I had ignored it for years not knowing it was a Wainy.

Looking down Borrowdale from Seathwaite Fell 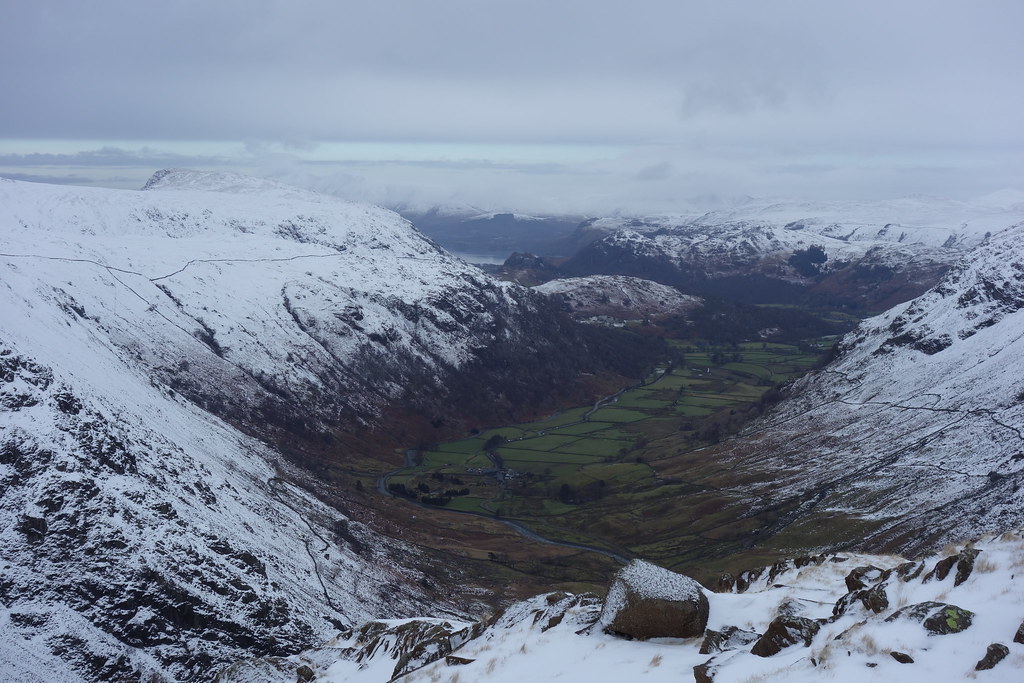 DSC01978
Having got onto Seathwaite Fell it was then a case of bagging the other cairns and then making our way over to Sprinkling tarn. En route over steve suffered the dreaded winter mishap, sinking straight through the snow and into a hidden bog thus ensuring a cold wet foot for the entire day. Getting over to the tarn and up towards Esk Hause was hard work, the snow being fairly deep and soft. As we walked the weather was changing to the north and began to clear. Southern Lakes remained under cloud however.
Sun trying to break through over Esk pike 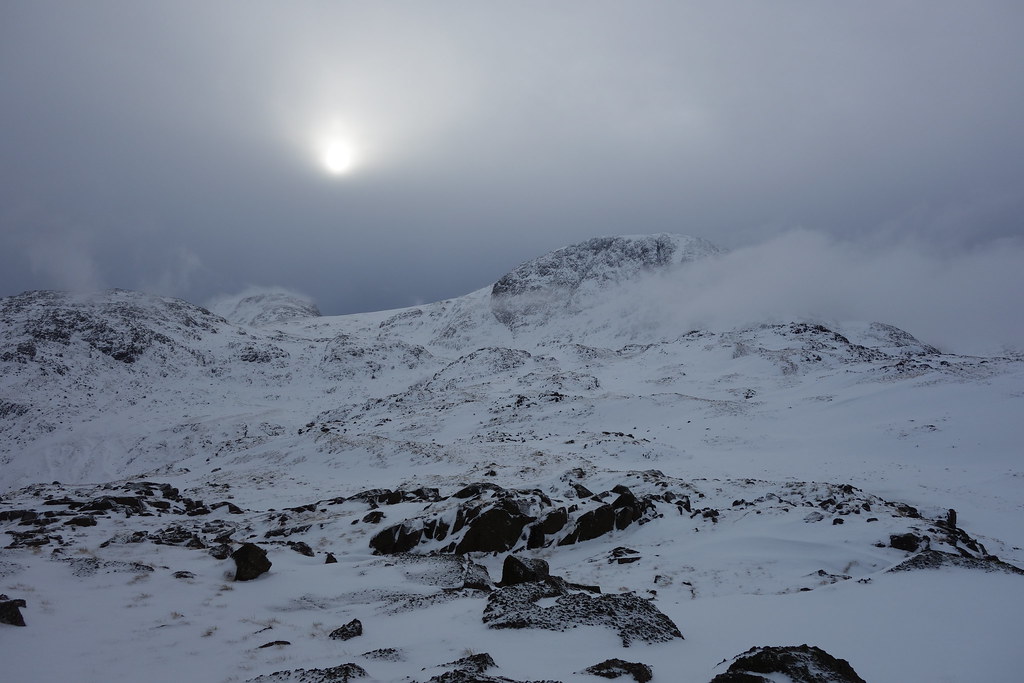 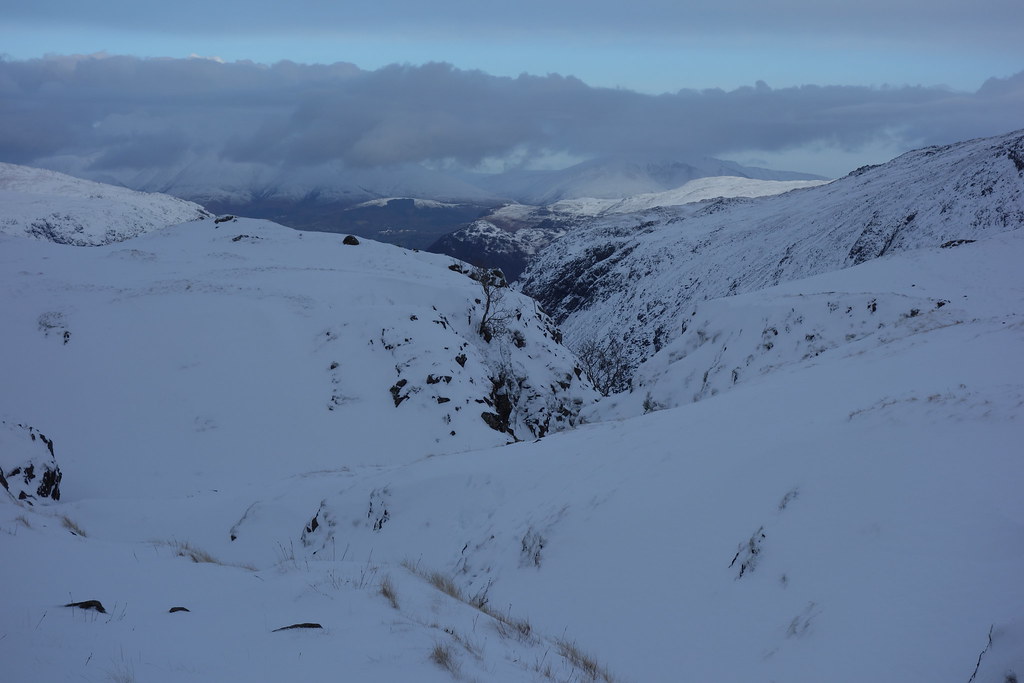 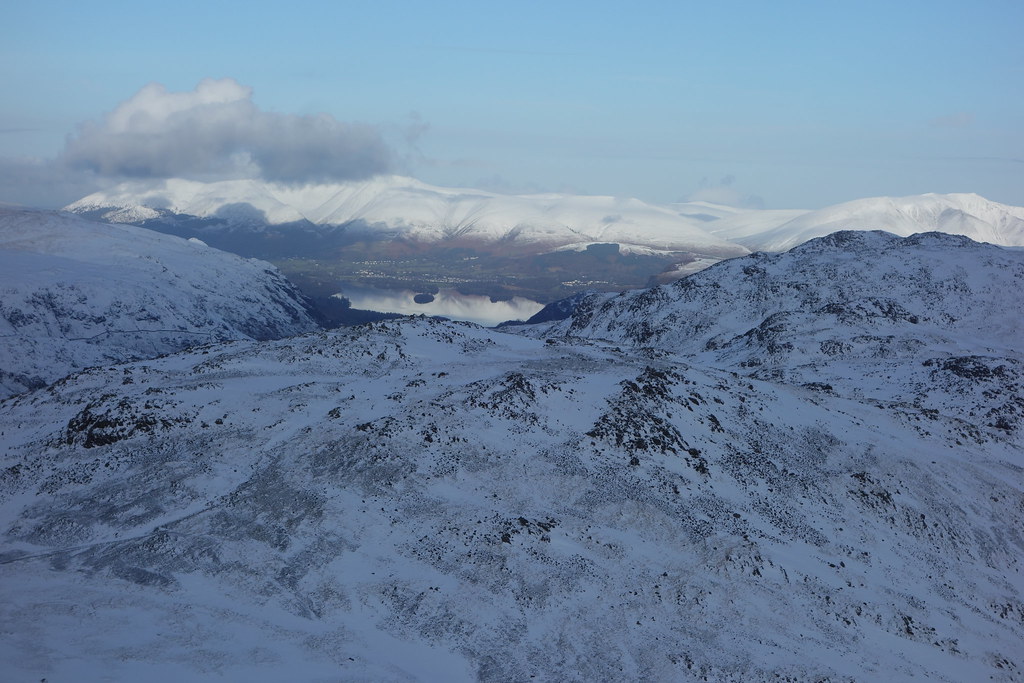 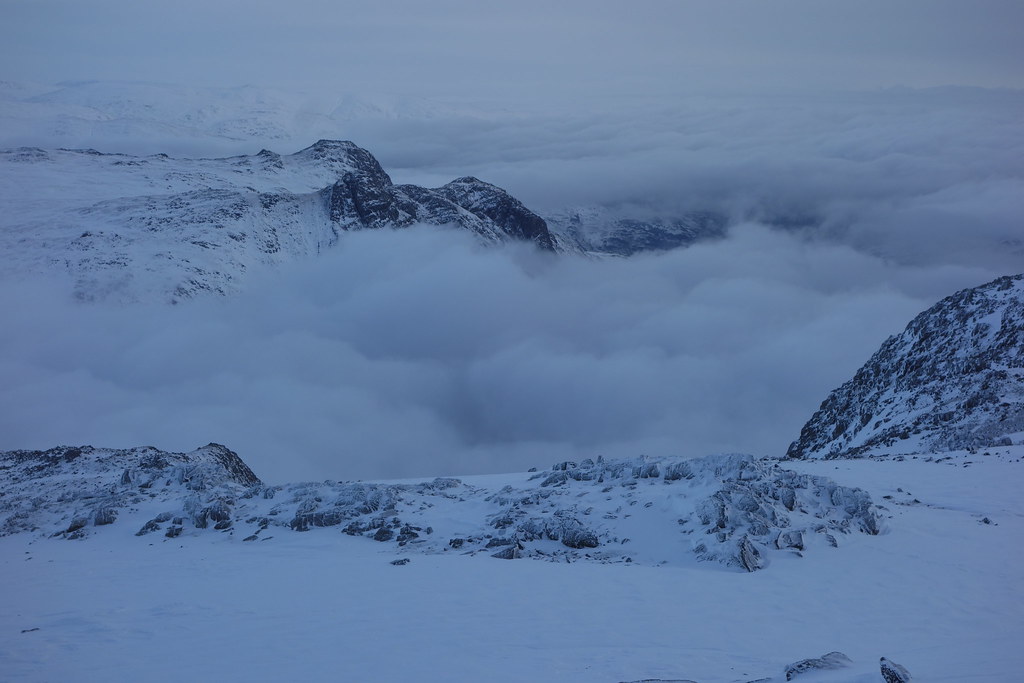 DSC01995
The path up onto Esk Pike was better, the wind having stripped the slopes of snow leaving ice which was walkable. The sun came out on Esk pike and the day became a perfect winter walking day. Esk Pike completed it was down to the col and the quick ascent of Bowfell before dropping back down to the col again and then dropping down towards Angle Tarn but before the path dropped too far cutting over snowy ground to join the path going up to Esk Hause. From there it was a quick ascent of Allen Crags as it only sits about 250ft above Esk Hause and was too close to miss. Spoke with 3 youngish lads who had been backpacking for a couple of nights and were camping again at Angle tarn, hardy folk considering the forecast for Sunday
Yours truly on Esk pike 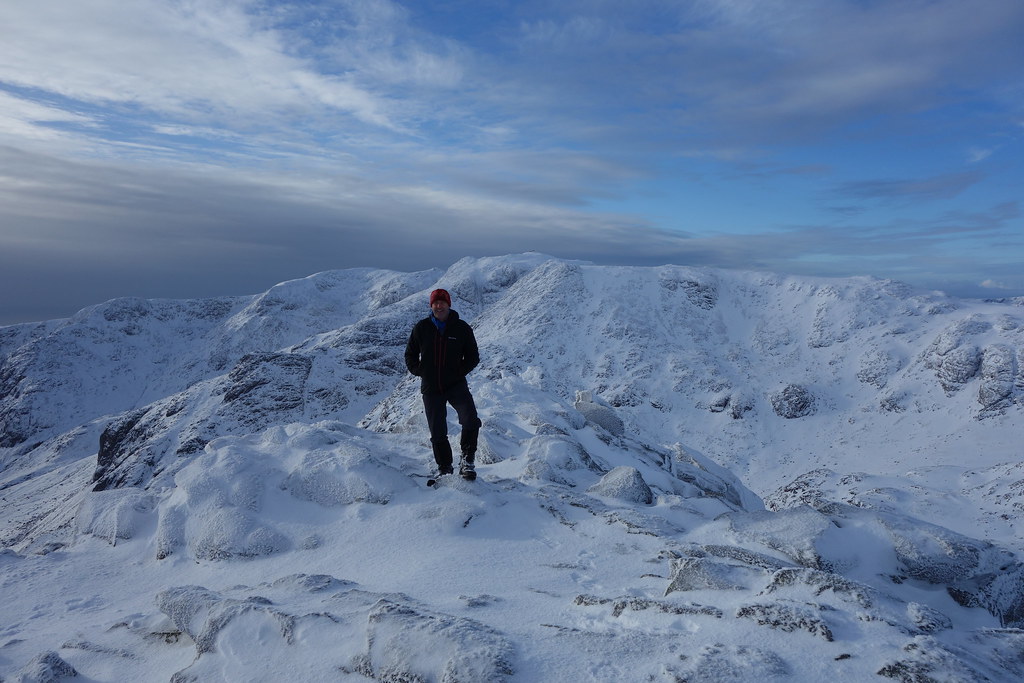 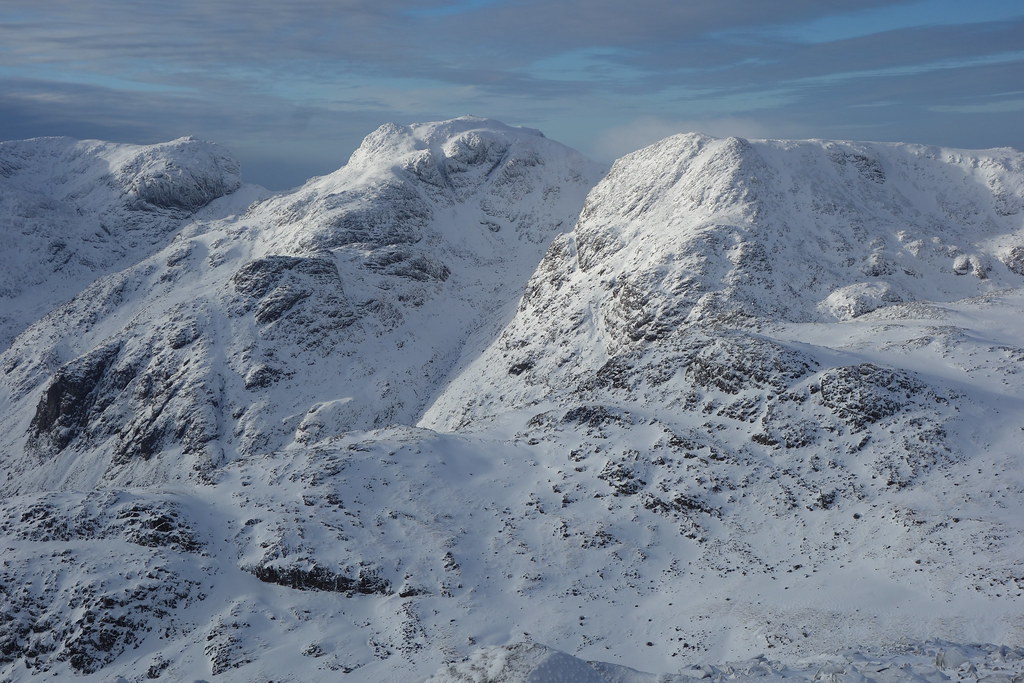 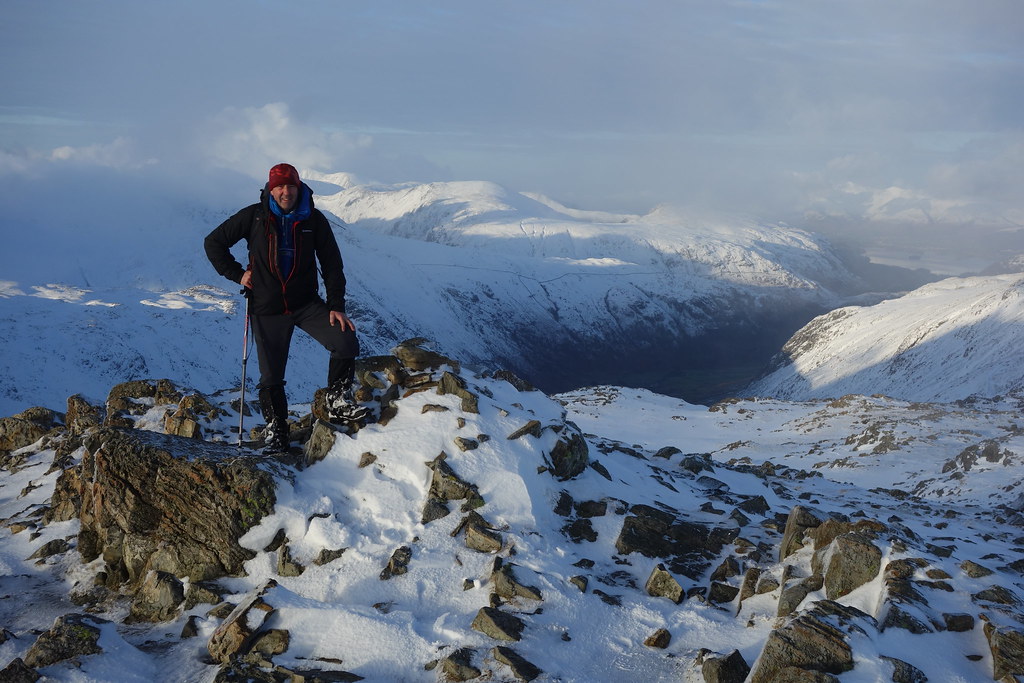 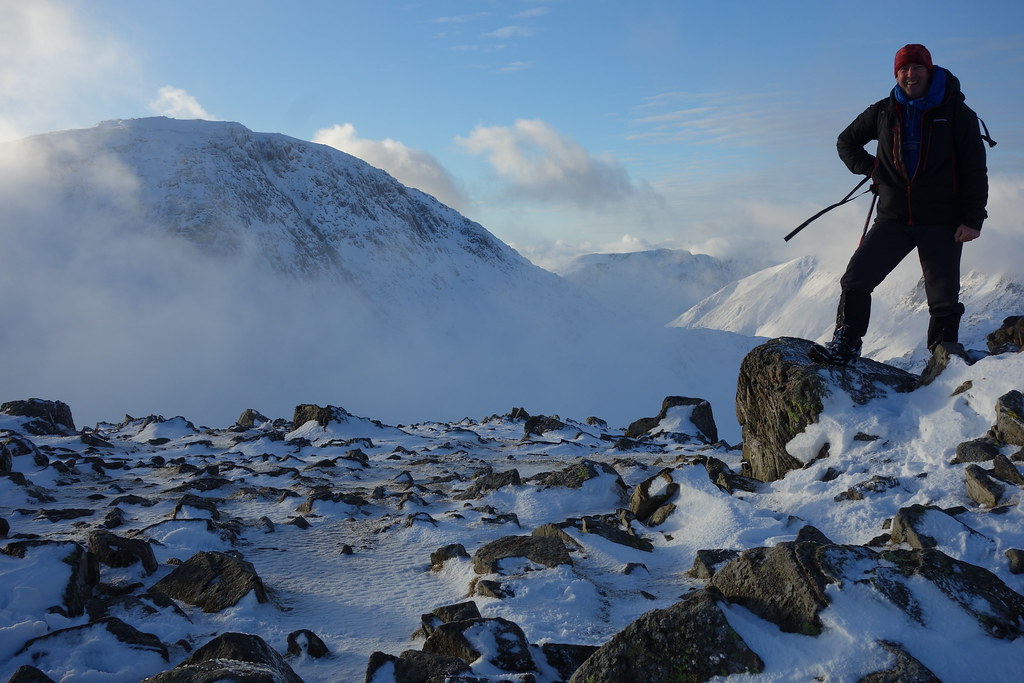 DSC02021
From Allen crags it was back down to Esk Hause and then down the slip slidy descent to Sprinkling and Styhead Tarns and then down the icy path to Stockley Bridge before the return to the car as darkness closed in.
Good round in hard conditions, just over 10 miles and 4 wainys.
Great Gable in the clouds.

Nice report GM, that's a fair old walk in the conditions (pretty hard going in the unconsolidated snow). Some great pics too - the one of the Scafells (presumably from Bowfell) is superb. It was a nice day to be on the fells wasn't it?

Some nice pics, a great walk and report

dav2930 wrote:Nice report GM, that's a fair old walk in the conditions (pretty hard going in the unconsolidated snow). Some great pics too - the one of the Scafells (presumably from Bowfell) is superb. It was a nice day to be on the fells wasn't it?

Cheers Dav ,It certainly was speshul...like,as they say around these parts!

Looked like a great day to be on the tops

. Wasn't a million miles away myself; shame we spent the best of the morning and early afternoon in Keswick

That looked a glorious day, conditions to dream about.