A wintery battle to some Lakeland bothies

A wintery battle to some Lakeland bothies


That time of year again - the Mountainstar birthday bothy weekend

. In fact I'd never managed to make it to one of these before as they are usually south of the Central Belt, but this year it would be an easy hop across the Pennines. I took Friday afternoon off work and caught a lift with Ben and Steven over to the Honister slate mine. We arrived in the last of the daylight, the concerns over the last couple of days that we wouldn't get anywhere into the Lake District without a snowplough put to rest.


Dubs.gpx Open full screen  NB: Walkhighlands is not responsible for the accuracy of gpx files in users posts
We set off up the mine track, which was fairly easy if a bit steep - the mine owners had been up and down it on the quad bike all day, so the snow was well compacted. A couple of other members of the party headed off up the incline, which started well, but soon they were floundering in waist-deep powder. 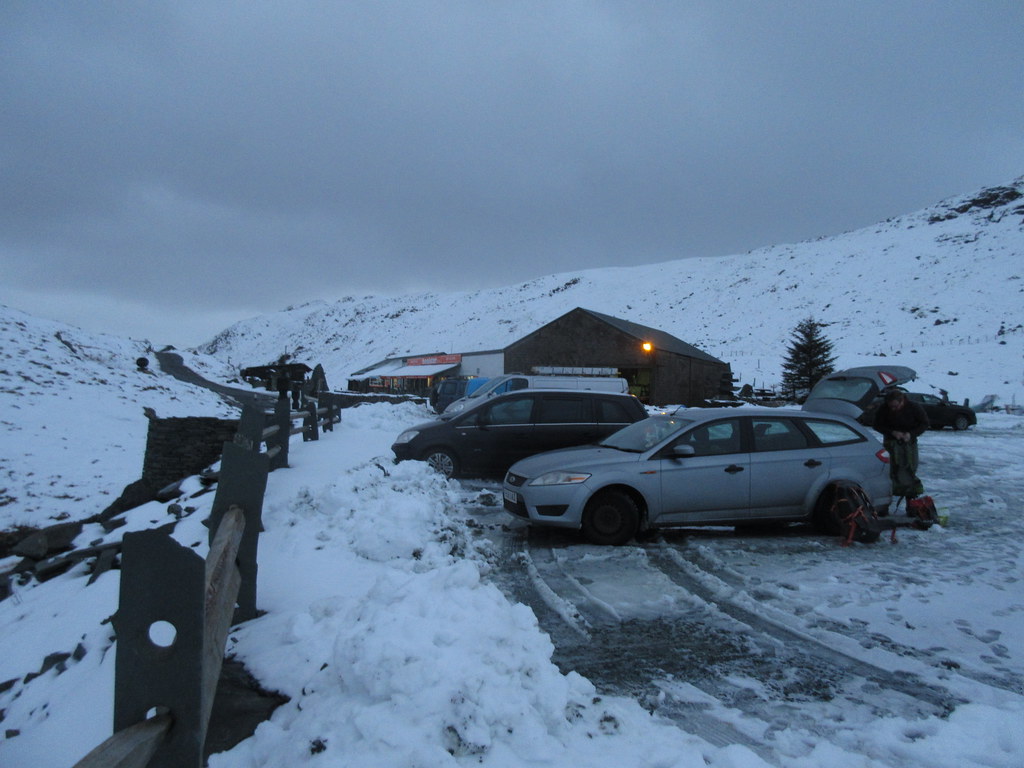 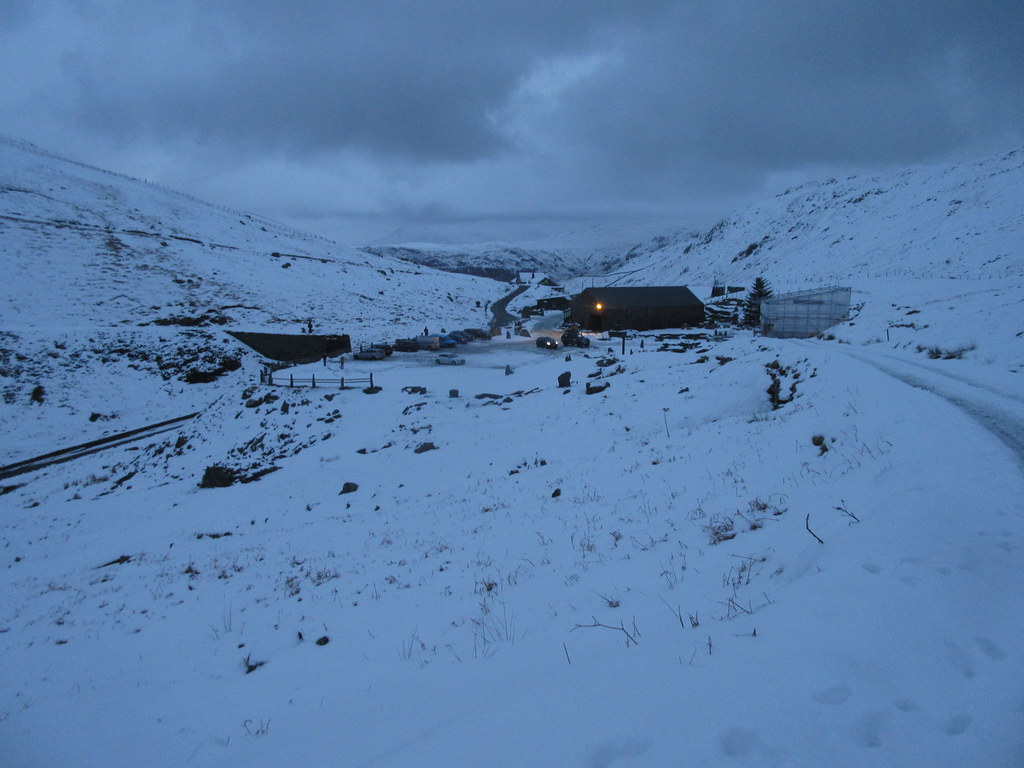 Looking back to the Honister slate mine 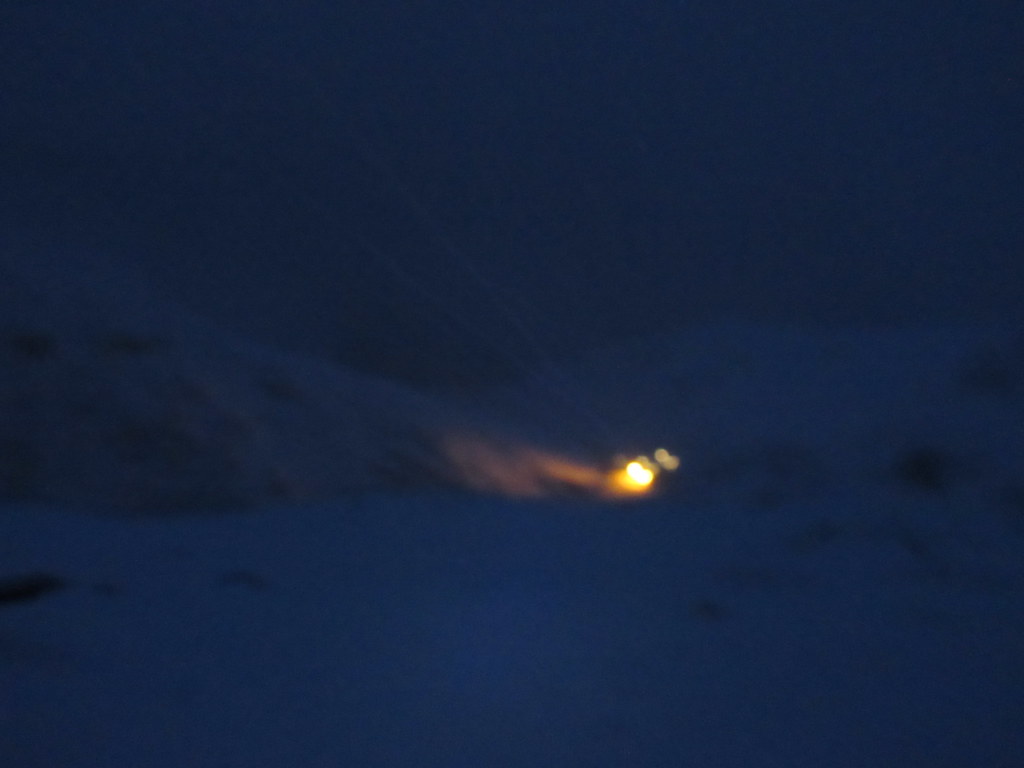 Dark before we reached the bothy 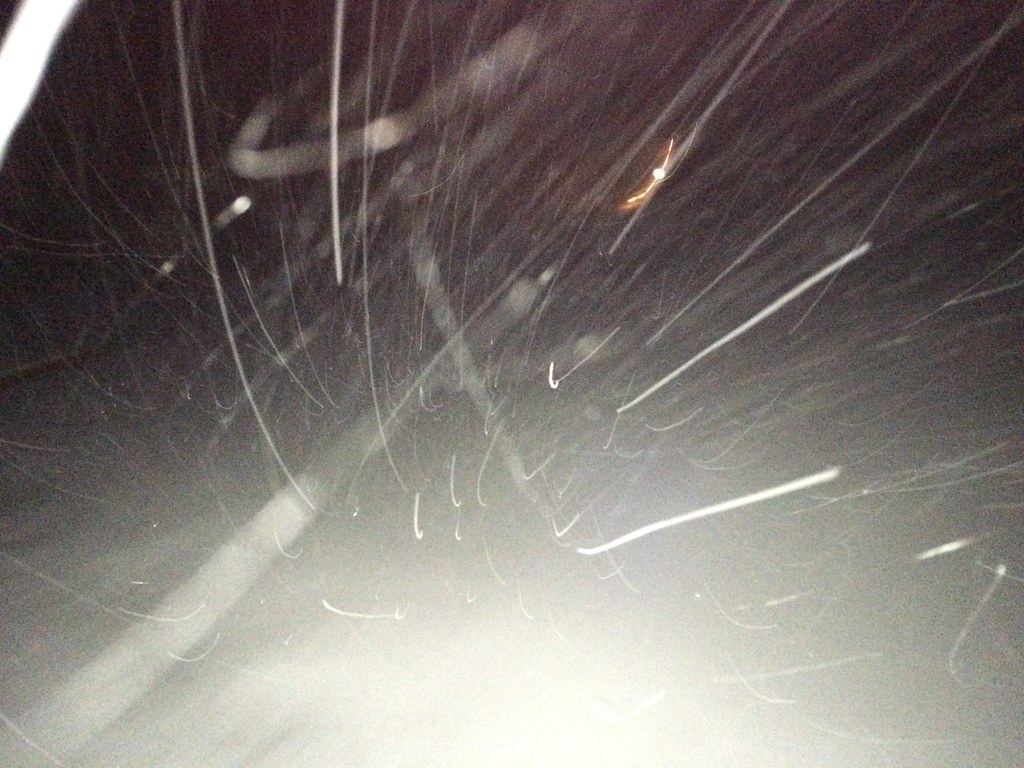 Weather was a bit wild at times 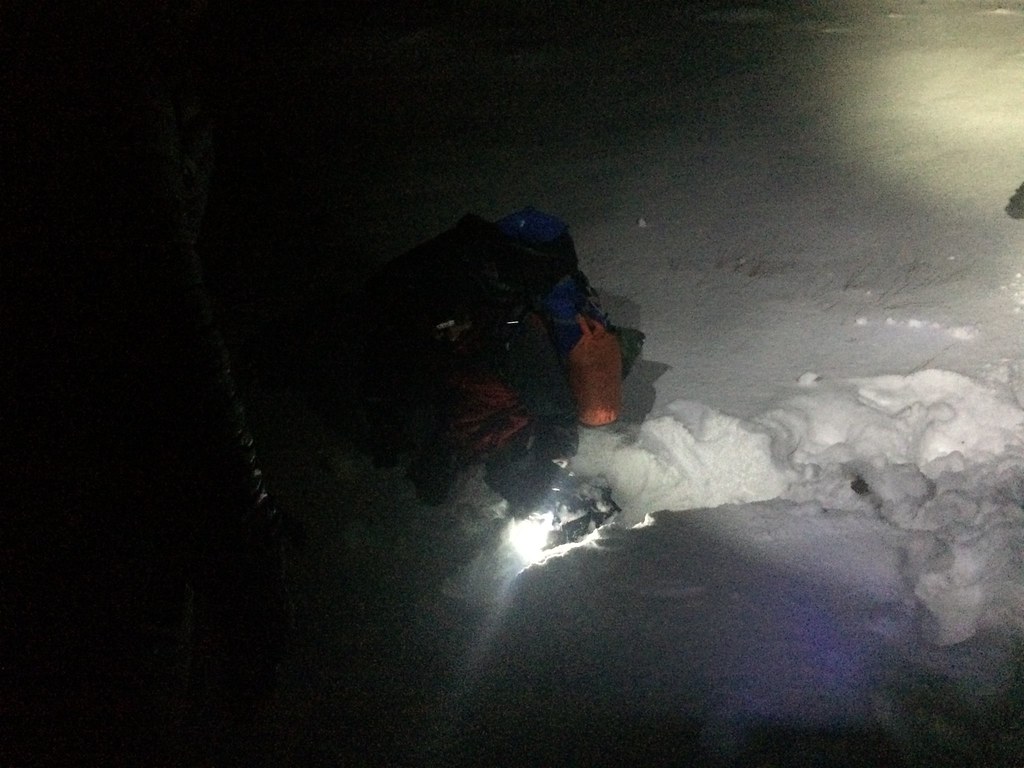 Deep snow away from the mine track

The weather got rather wild once darkness had set in, and having missed the path down from the mine to the bothy, this was a bit of a flounder through heather and deep snow, fortunately spotting Mountainstar's torch (he had walked in a bit earlier) before we had to think too hard about navigating. Not an especially long walk in, but it felt like a micro-epic 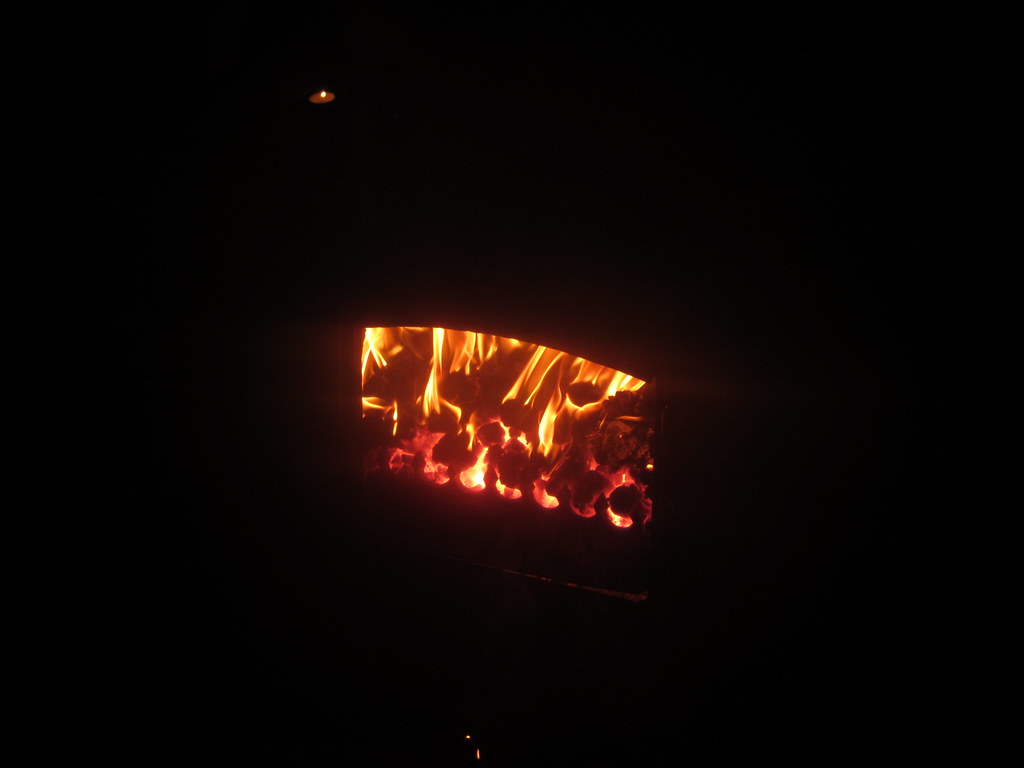 Once we were there, it was lovely and warm, and a couple of hours later, Monty burst through the door, complete with guitar. Despite my worries about potential overcrowding (it is quite a popular bothy after all), everyone fitted in nicely and a great evening was had 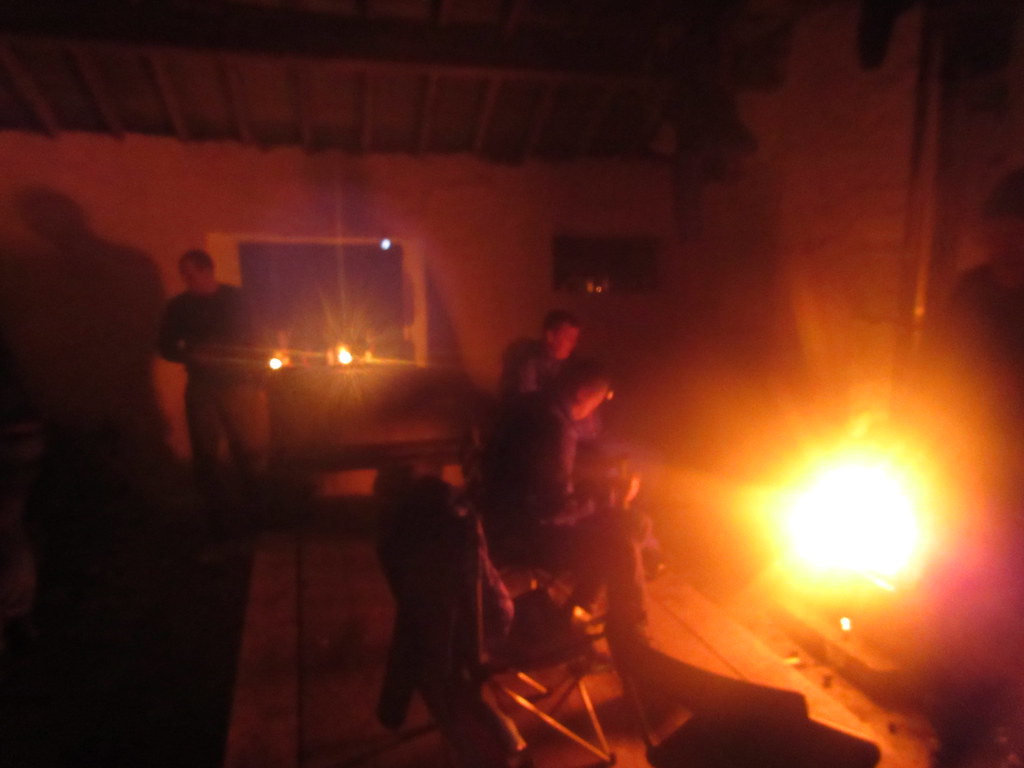 Next morning, some heads were sorer than others, and I decided to take advantage of the grey but clear weather to take a wander up Fleetwith Pike. It isn't exactly a long walk from the bothy (less than 200m of ascent), but no-one fancied joining me. On the way up, I passed a portable ski tow (a rope and pullies staked out in the ground, with a generator and winch). Who would have thought such a thing existed? The mine owners were certainly diversifying their income 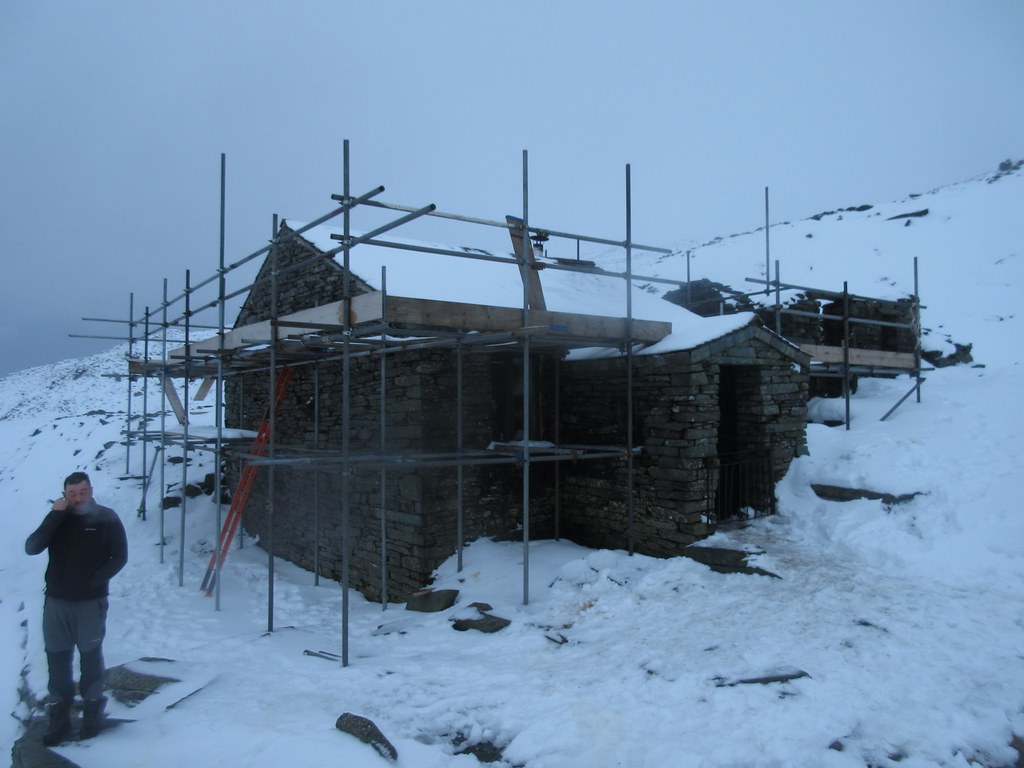 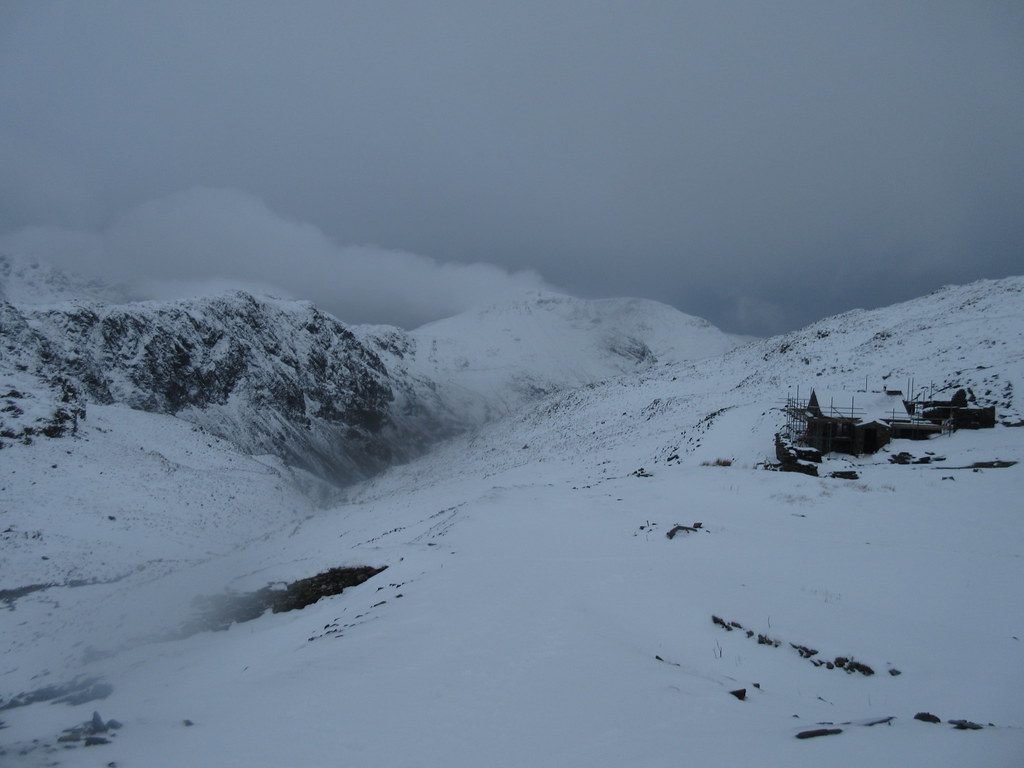 Deep snow made the going more difficult than normal, but it only took me 30 minutes or so to reach the summit. Although many other hills were in the cloud and the weather looked a bit ominous, the views down to Buttermere were as lovely as ever, and High Stile looked fairly impressive. Great Gable could also be seen poking out to the south. 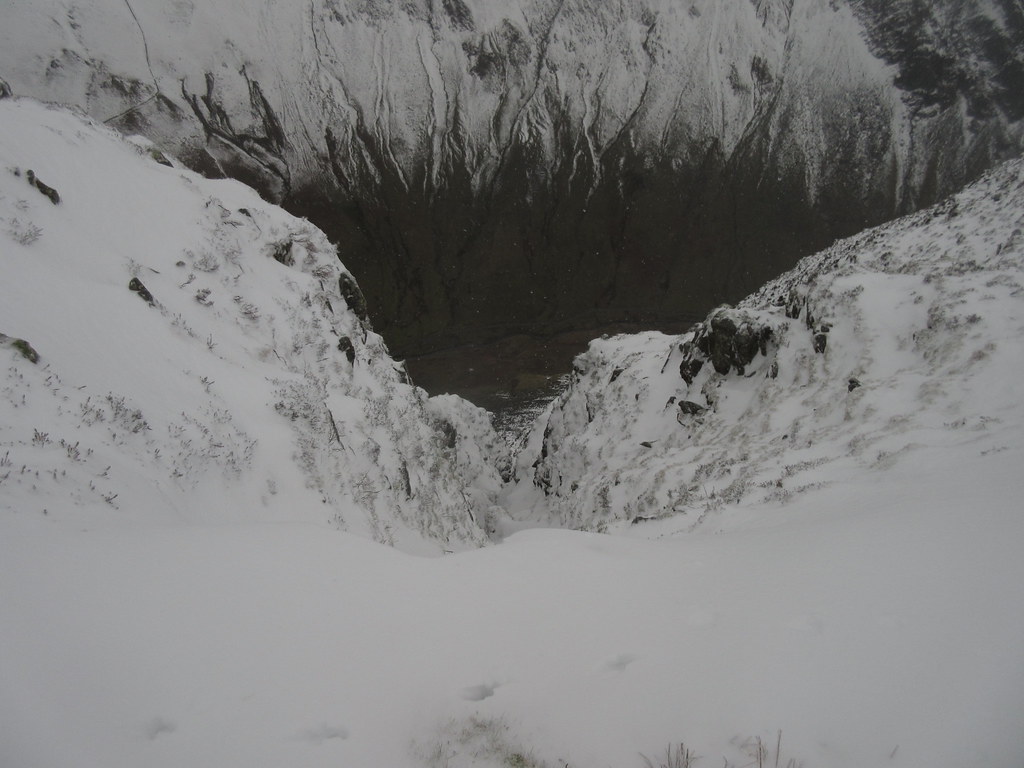 Looking down into the Honister Pass from Fleetwith Pike 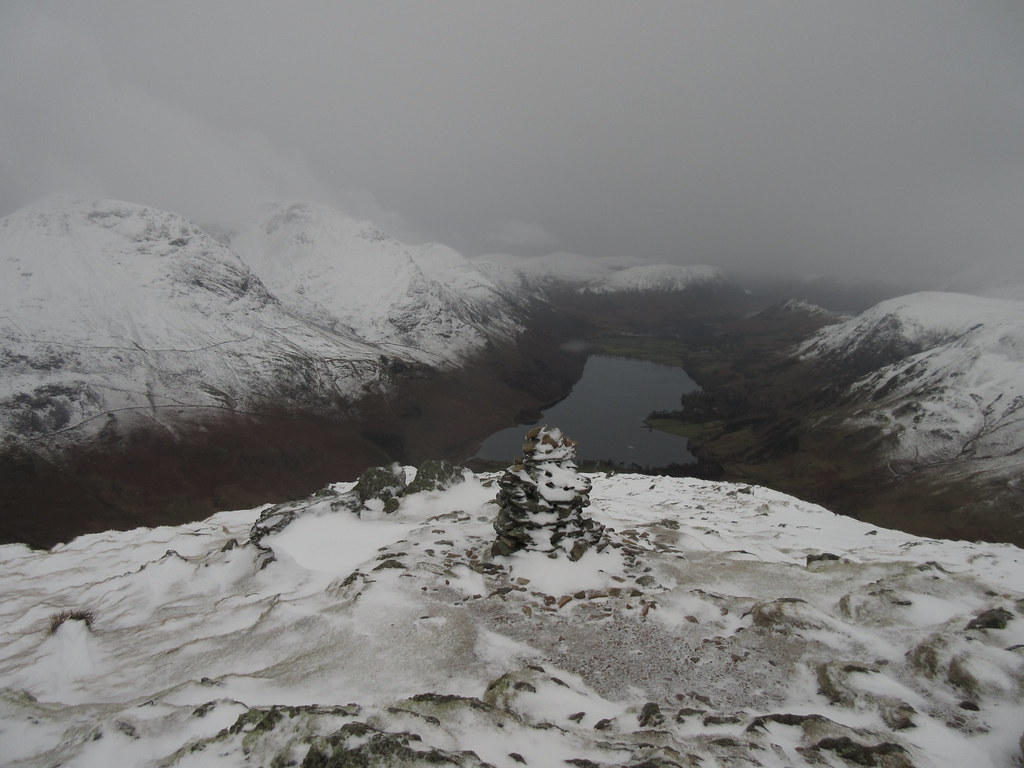 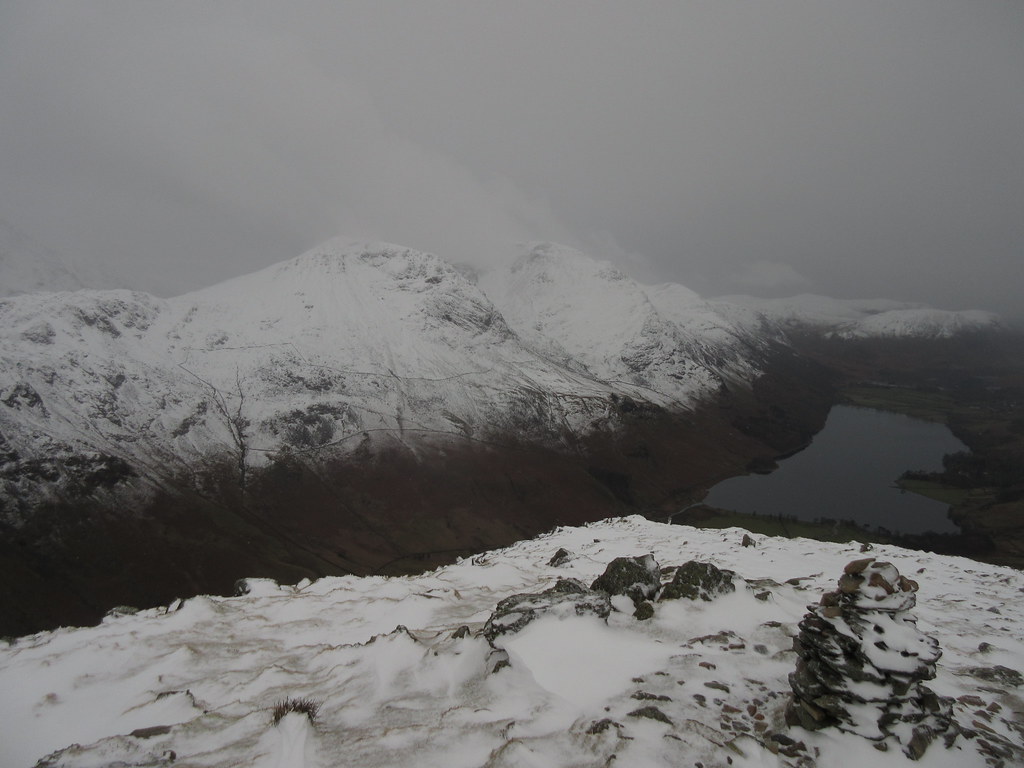 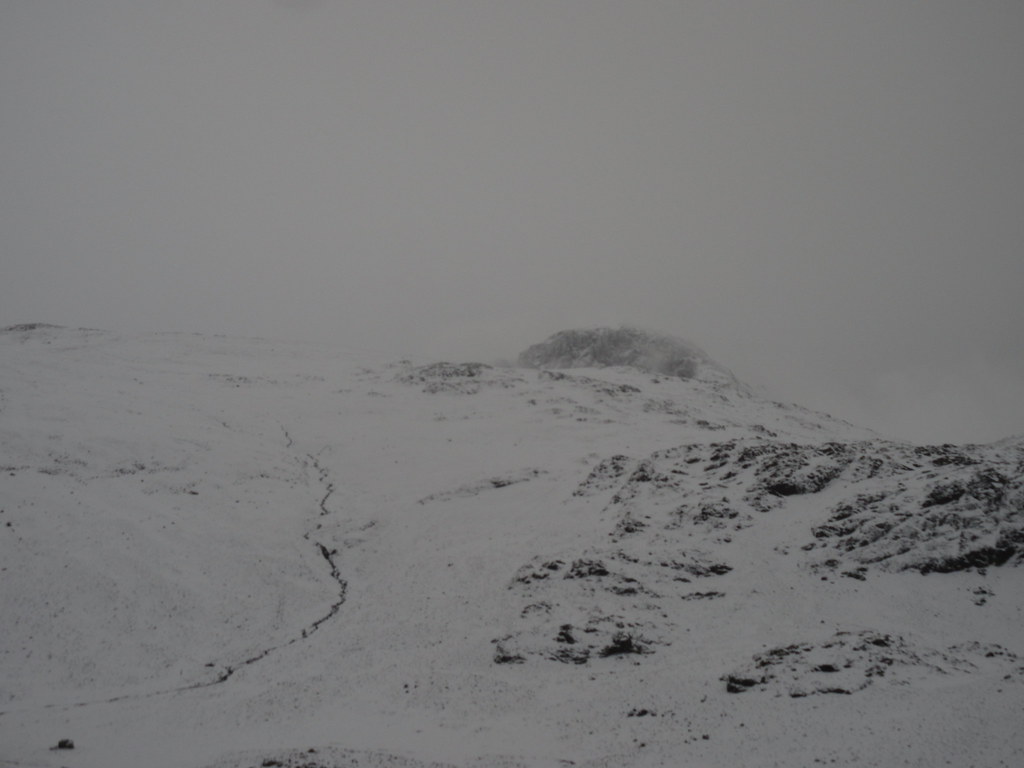 I took a more direct line back towards the bothy, but veered off just before I got there, planning to have a look at the nearby Warnscale Head bothy. However I noticed everyone else heading back to the cars, and after floundering around on deep powder for a short while, I decided Warnscale could wait for another time. 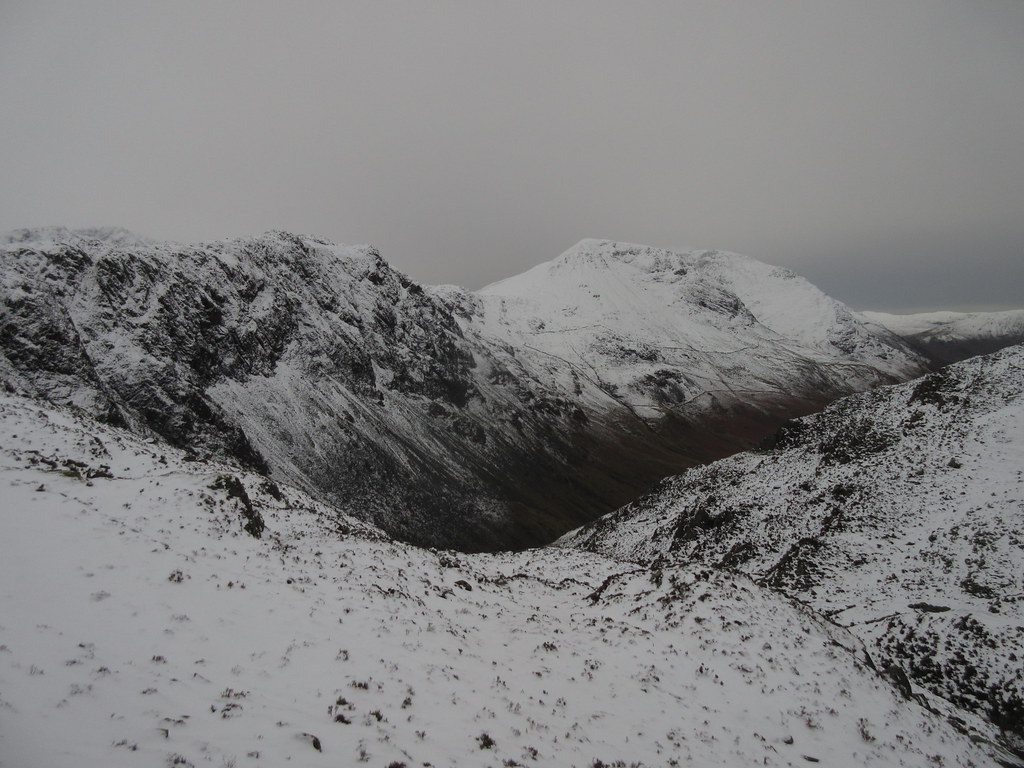 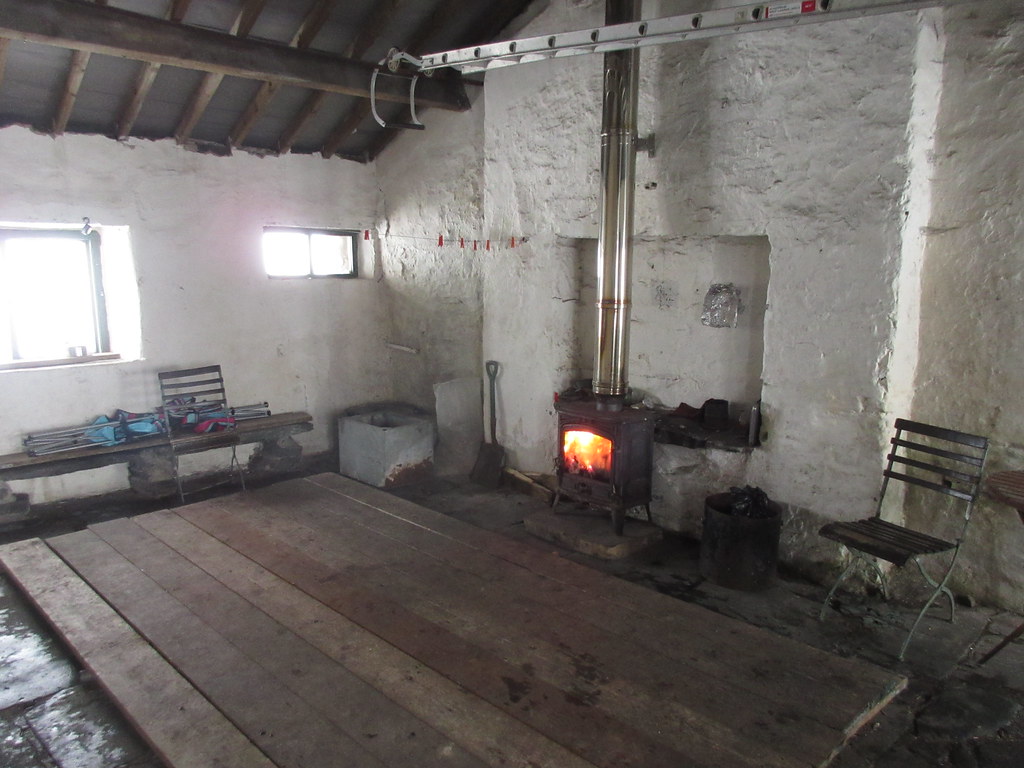 Back at the bothy, I picked up my stuff and caught up the rest of the group just as the sun appeared. We wandered around Keswick in the sun for a bit, stocking up and having lunch, before heading east and south for the second part of the weekend. 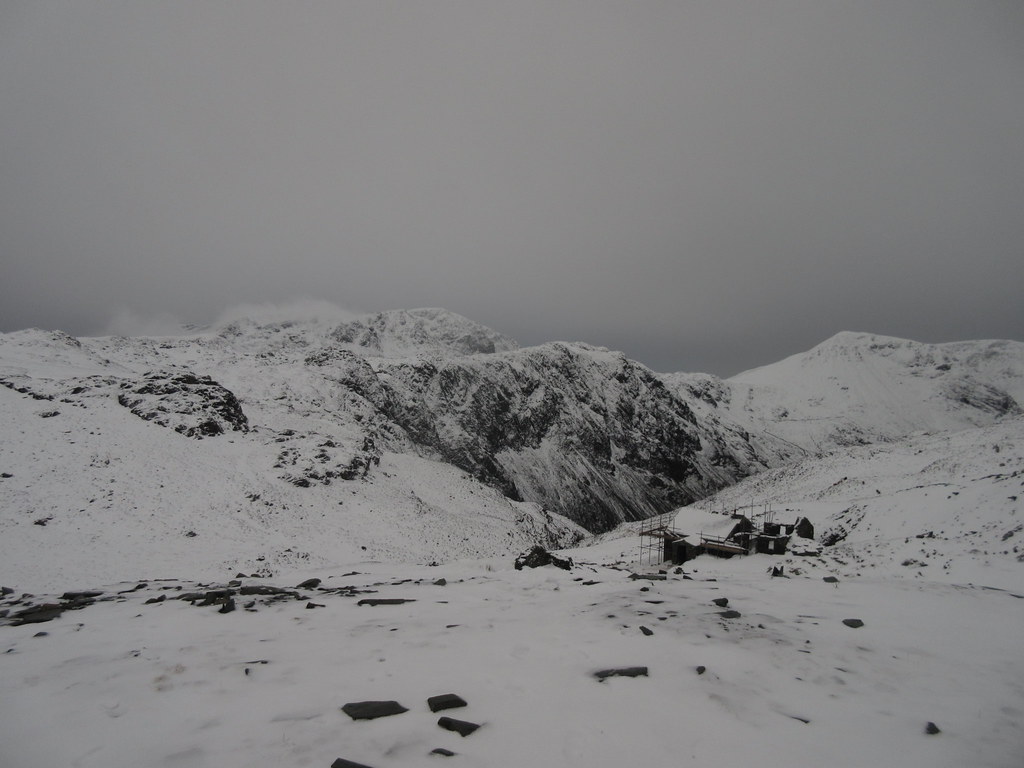 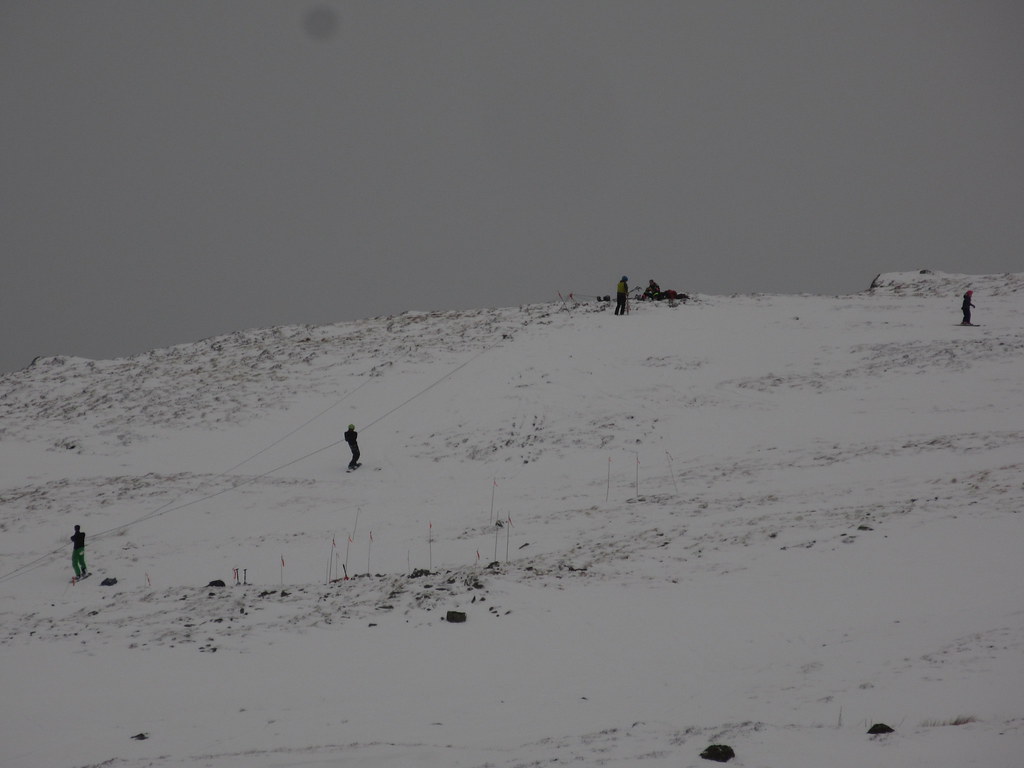 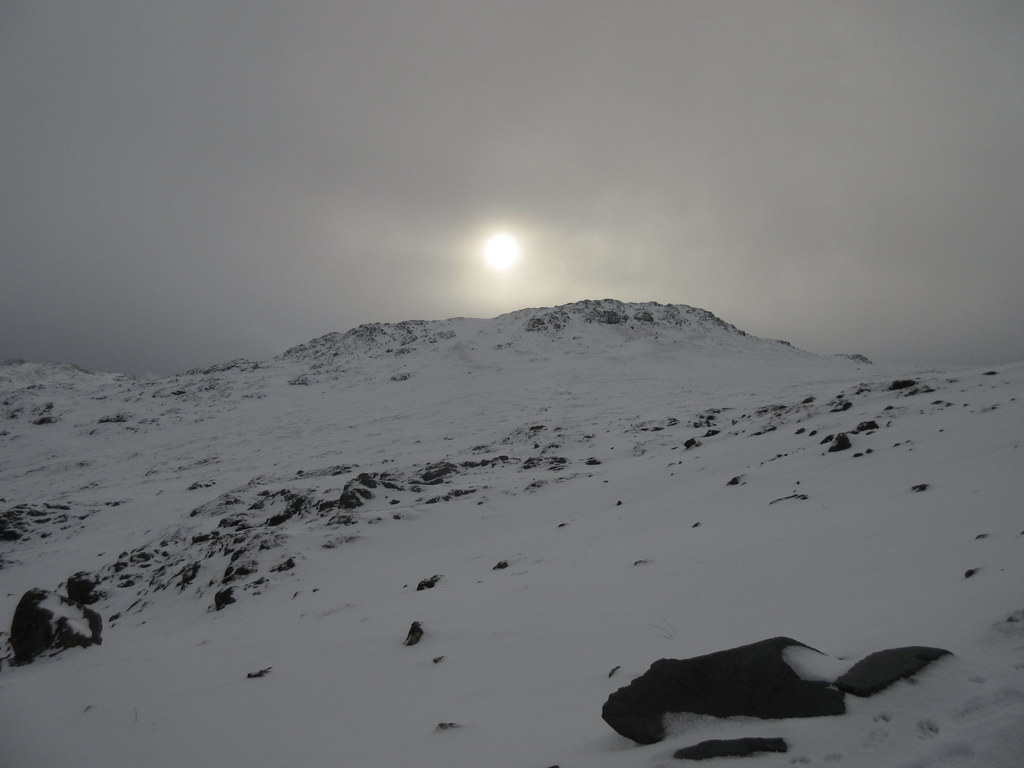 
Mosedale Cottage.gpx Open full screen  NB: Walkhighlands is not responsible for the accuracy of gpx files in users posts
The main discussion about Mosedale Cottage was where to start the walk-in from. Swindale was preferred for the shorter distance, but quite a long drive up narrow, icy lanes. In the end we opted to start at Wet Sleddale Reservoir, with the option of parking up on the A6 near Shap if this wasn't driveable.

The road wasn't too bad, and we were ready to start walking at 2:30pm. We would easily be at the bothy before dark I thought - perhaps with a spare half hour to nip up one of the hills behind. The afternoon was absolutely stunning, which put everyone in a good mood for the walk. 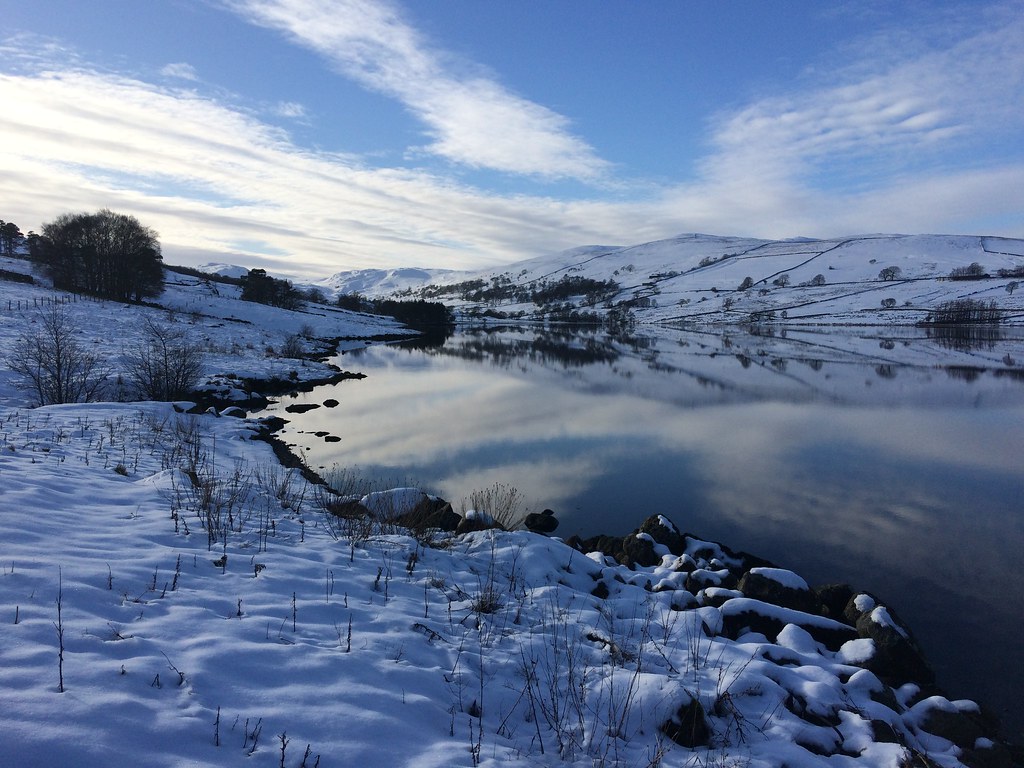 The going was OK at first, following trodden tracks along the shores of the reservoir. Bit by bit, the going got more difficult, and we mingled with another group also heading to the bothy. There were now a large number of people of very varied abilities and speeds, and mostly with heavy loads heading for Mosedale Cottage, strung out over around half a mile. 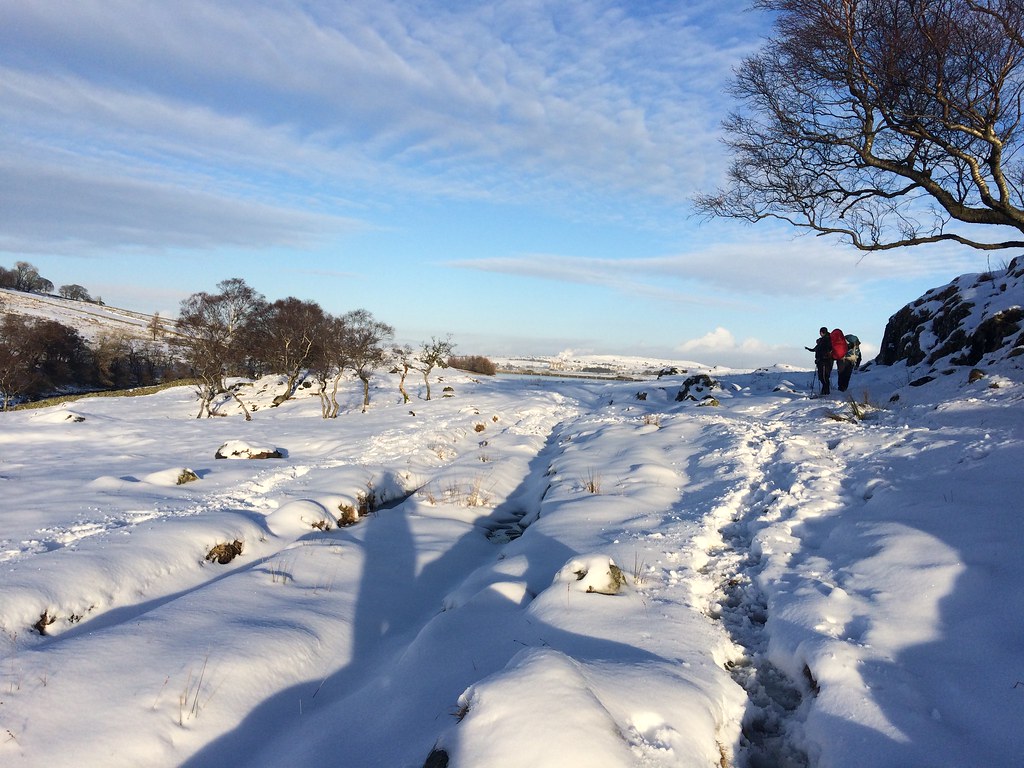 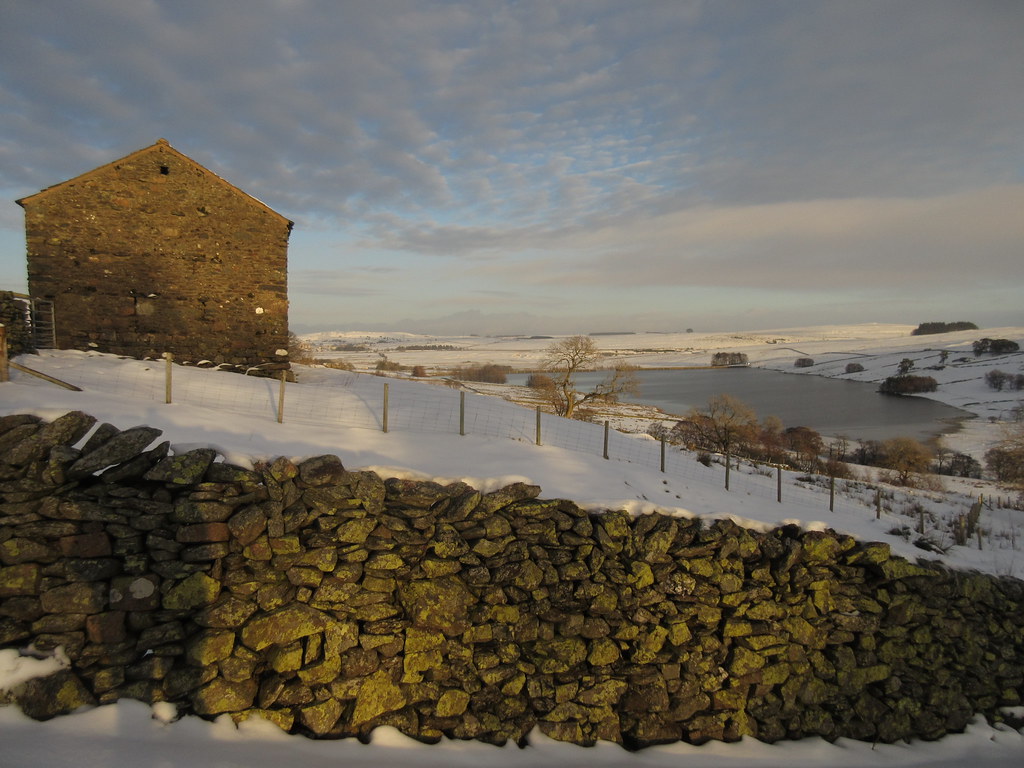 Past the buildings at Sleddale Hall, the snow became intermittently knee-deep, and we were post-holing in the deep footprints already made. It was pretty tough, and after my estimated 90 minutes to walk in, we weren't even halfway, with the toughest terrain still ahead. 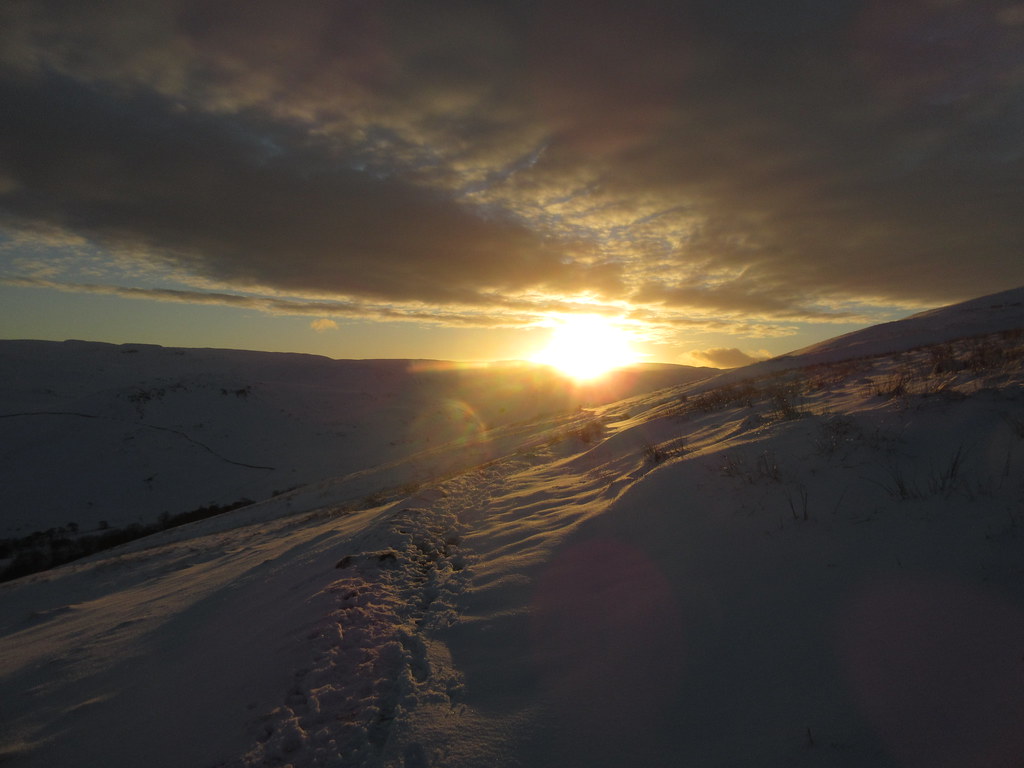 Thought we'd be there by now...

I dawdled a bit, keeping an eye on the stragglers, and as afternoon turned to night, the sunset and sky was beautiful. I even saw a shooting star at one point 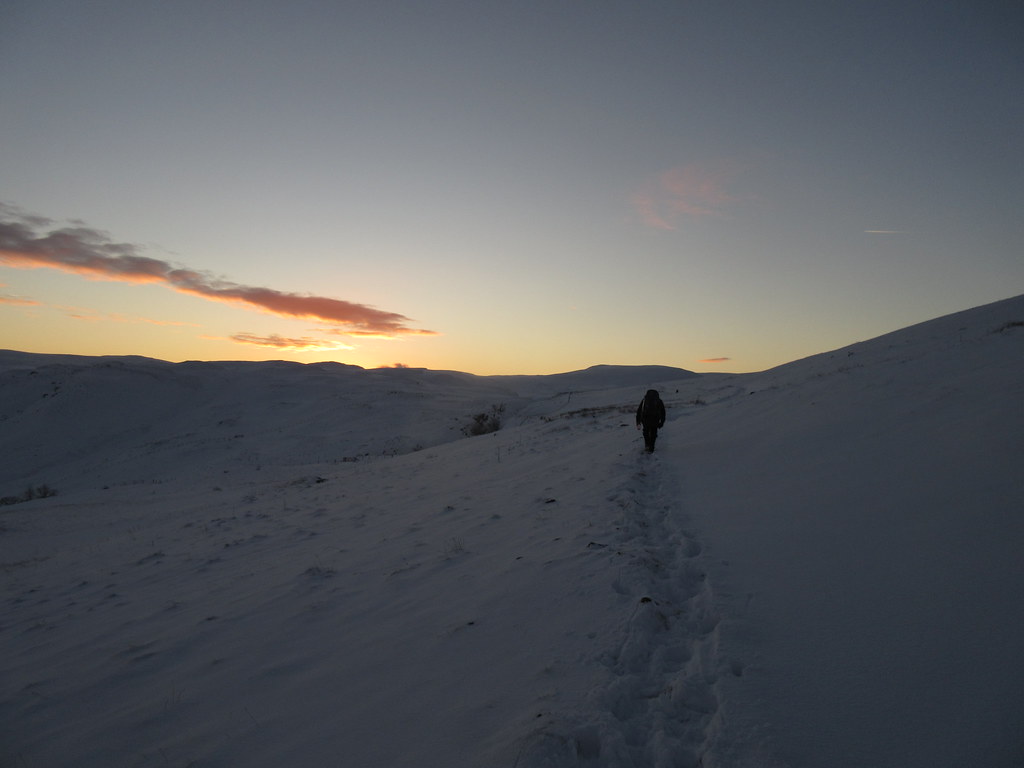 ...but there's plenty more walking to be done 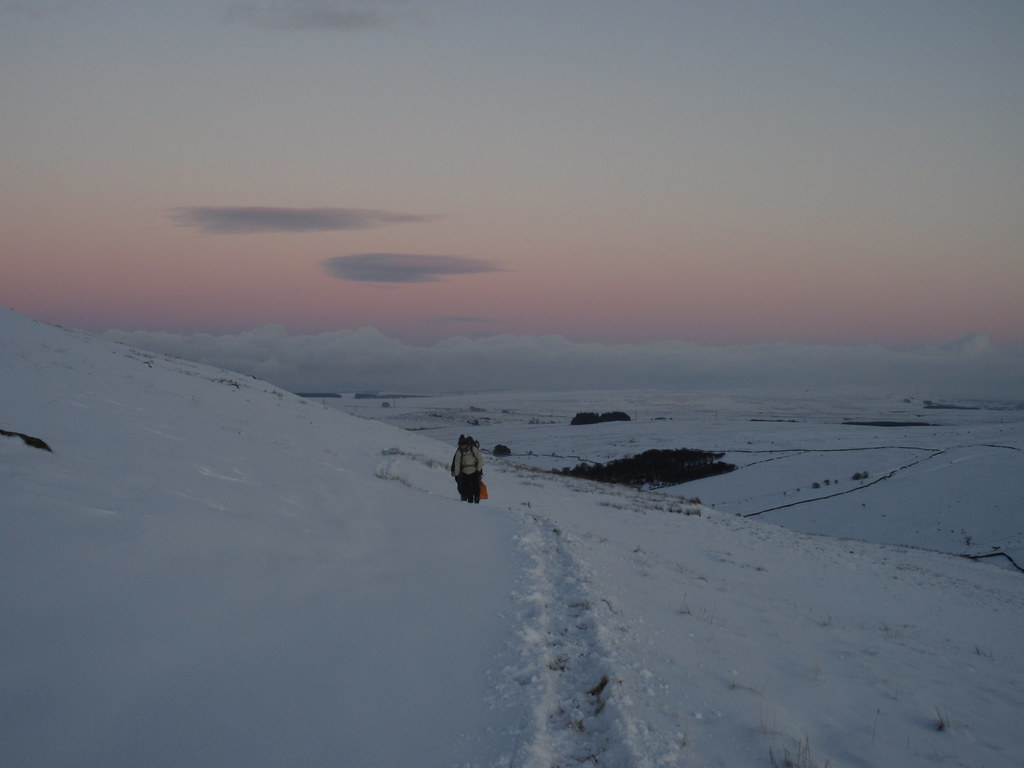 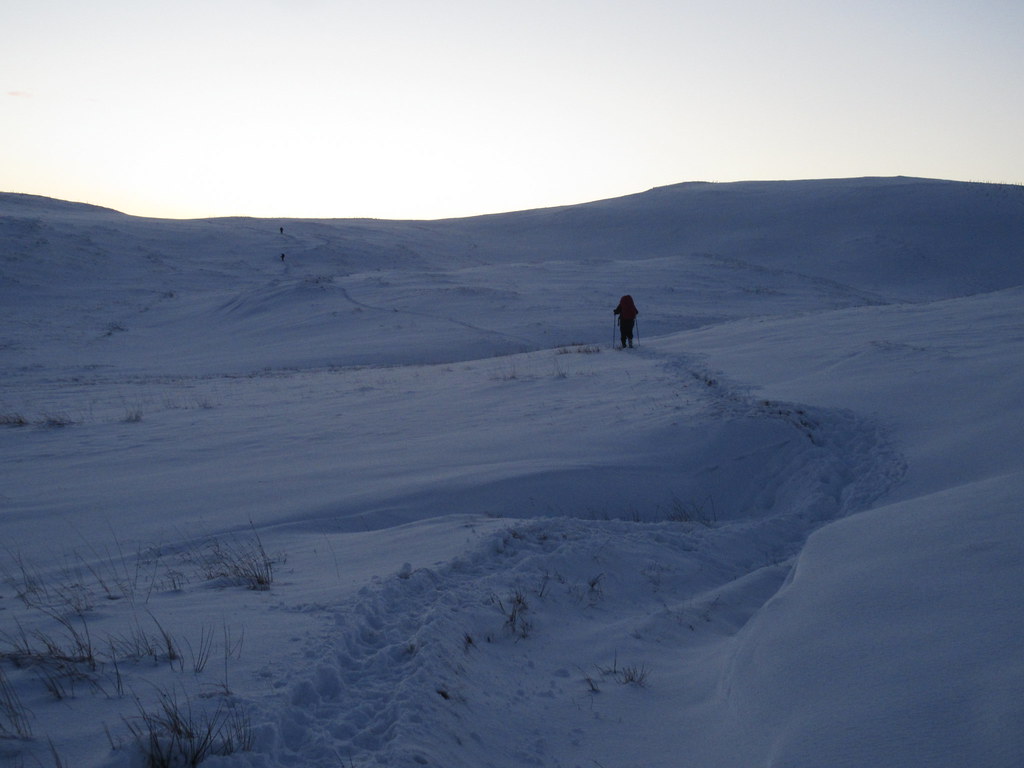 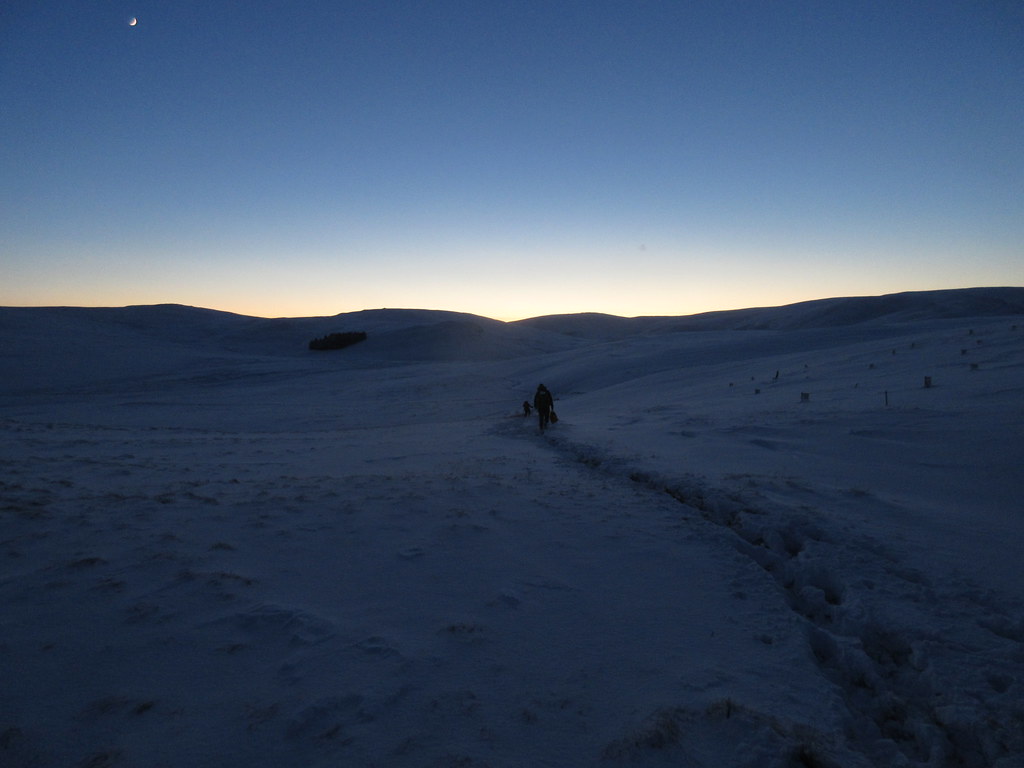 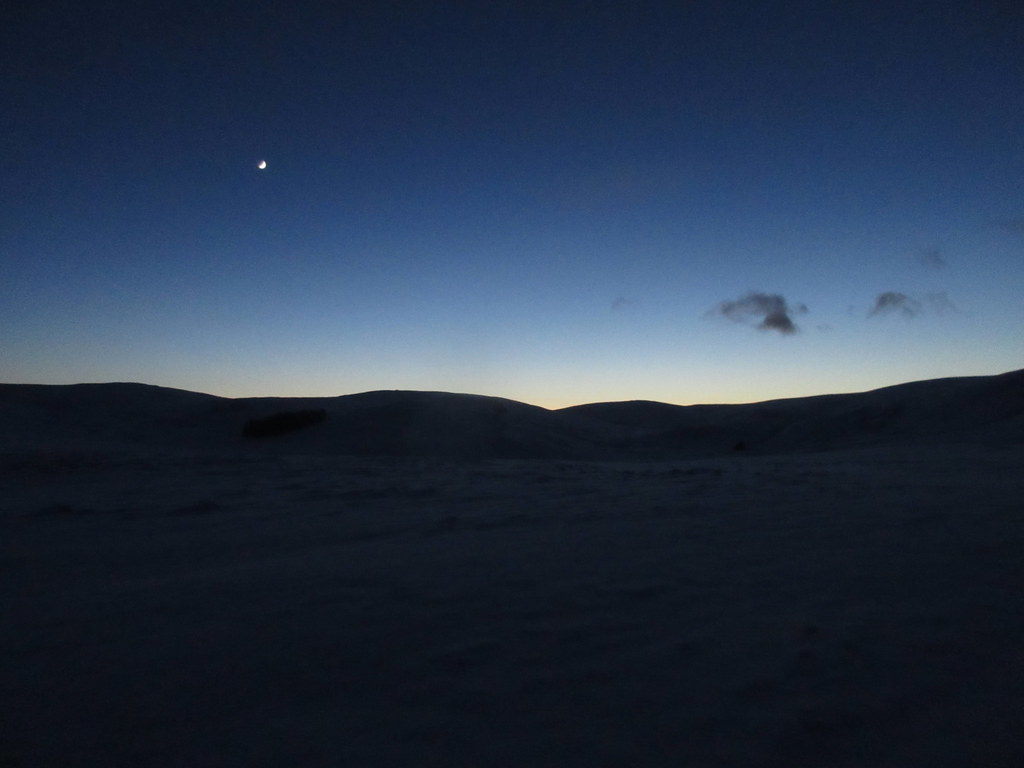 By this point most people weren't really in the mood to appreciate any of it, as it was a tough snow slog pretty much to the door. In fact I was getting pretty cheesed off with the (in the end completely unnecessary) 10kg of coal balanced on top of my rucksack. Finally, shortly before 7pm, everyone had arrived.......which also included at least 3 other groups and various individuals. It had been Dubs Hut where I'd worried about overcrowding, but with an eventual 36 people crammed into Mosedale Cottage, this is the one I should have worried about 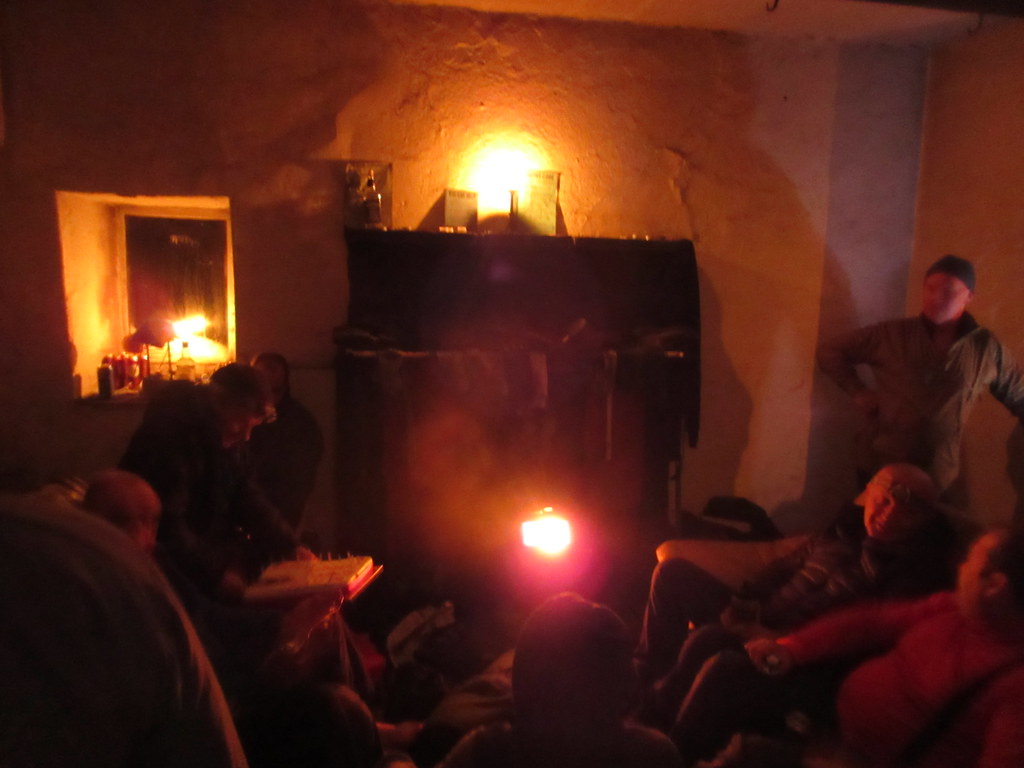 Mosedale Cottage - just a small fraction of the people there

Still, we all managed to get on and a good party was had for the second night running

. Jaxter and MKG were missed, having pulled out late on, but that probably ended up for the best given the amount of space available. I'm sure they would've fitted in behind a door somewhere though 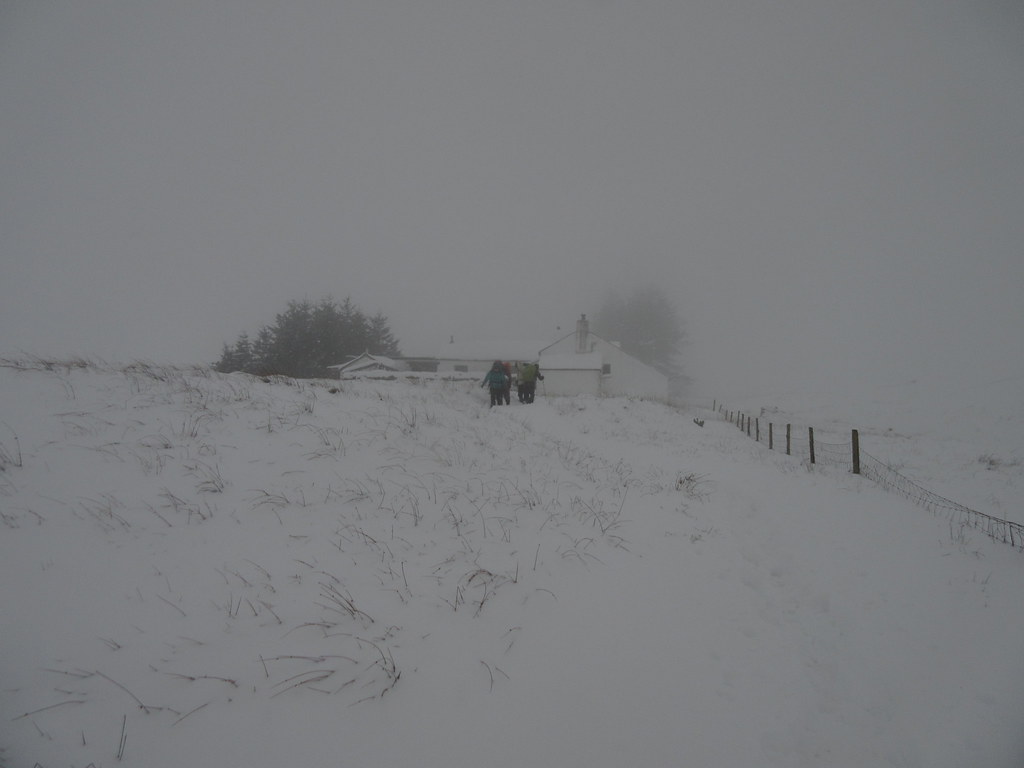 Any plans of a quick hill the next morning were soon put to rest after seeing fresh snow falling. With all-too-painful memories of the walk-in on most people's minds, there was no sense in waiting for it to be any more difficult on the way out. 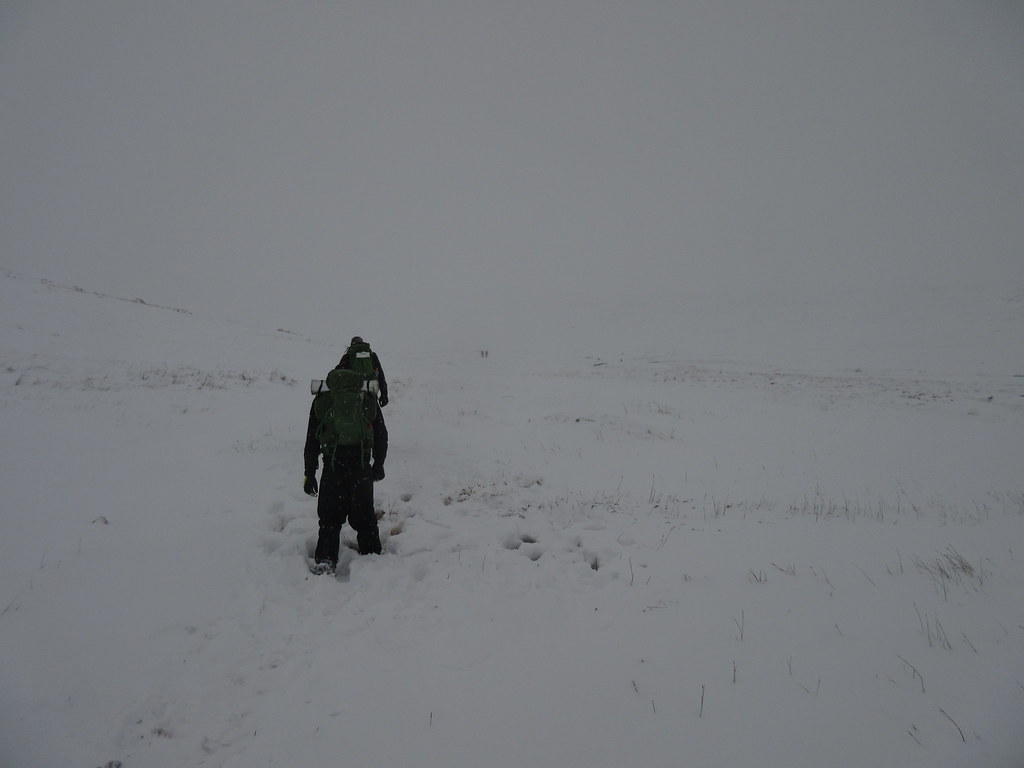 Higher up on the traverse back to Wet Sleddale, yesterday's footholes were already filled in and we had to break a new trail. Fortunately the wind was behind us, and despite the poor conditions, we were back at the car in much less time (perhaps 90 minutes less) than it had taken us to get in. The next worry was getting back to the main road and M6, as the road out from the reservoir was an icy mess with fresh snow on top. Ben did a great job of getting us out of there with no skidding or pushing involved (even if it was a bit nailbiting), and after a short section of poor conditions across the Shap summit on the M6, the rest of the drive back to Newcastle was pretty clear.

Back in Sunderland, it was pretty miserable, and despite my best intentions to do some shopping and clean up my weekend stuff, I spent most of the afternoon dozing. Despite the rather small amount of walking over the weekend (in distance at least), it was rather tough and I was knackered.

Cheers to Mountainstar and everyone else for another classic bothy weekend, albeit one with many 'interesting' aspects

Looks like a great weekend, and good packhorse training

Nice one, must have been a great weekend despite the slog to Mosedale Bothy

Great report of an 'interesting' weekend. That route you took on and around Fleetwith Pike looks crazy!

Are you sure you weren't drunk?

Impressive shot looking down that gully into Honister Pass though. As for Mosedale Cottage, I had no idea it was so popular!

Looks great fun if a little bit like hard work at times, don't blame you for having a short nip up Fleetwith Pike, one of the best views in the Lakes IMHO.