This started off as a determined 10k walk to Slaggan Beach. As usual, I couldn't find the start of the walk, and decided on the alternative, (and easier to locate!) Mellon Udrigle Beach Circuit.

God only knows what I was thinking, leaving Nairn at 5:30am!! Far too early really at this time of year. Still, I'll know the next time. As it turned out, I reached my destination in almost perfect time for such a walk. A few words first about the drive down to Dundonnell and etc:

In the pitch dark on the A382, I was aware of very little of the scenery. What I was suddenly aware of, were Red Deer!!

A stag jumping out in front of you in the pitch darkness is, without doubt, an unnerving experience! And it happened more than once, although I soon got used to spotting their reflective eyes in the headlights and managed to avoid any disasters! Beautiful animals, just beautiful. As I approached Dundonnell, and the head of Little Loch Broom, I rounded a bend to be confronted by a good sized flock of sheep, just sitting sleeping in the road!

They were completely uninterested in me and my car and sort of vaguely looked up as I wound my way around them in the now near-light. Imagine my amusement then, when I came across a warning sign farther down the road, which read: "Red Squirrel Crossing"

The sun was just rising as I parked at the car park above Dundonnell. The idea being to capture the sunrise on the loch. Due to my impatience and desire to get on, here's the best I could get: 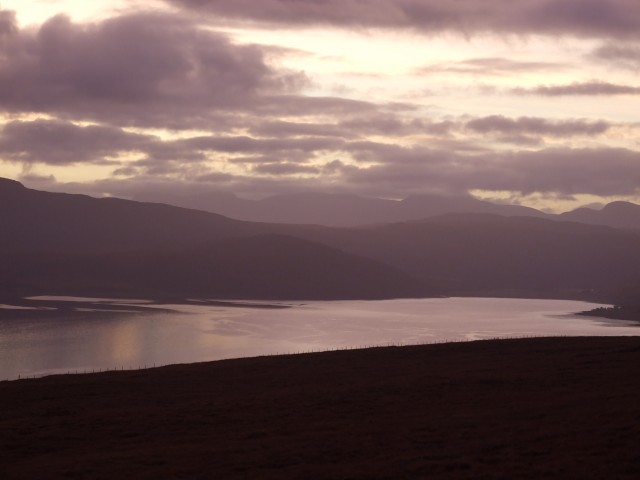 Onward then, to my goal. But something caught my eye on the way, and it was...... Little Gruinard Beach!! I parked the car,grabbed the camera and off I went down to the perfectly gorgeous beach. With the light just about perfect now, I couldn't contain myself and snap-happiness hit me again!! 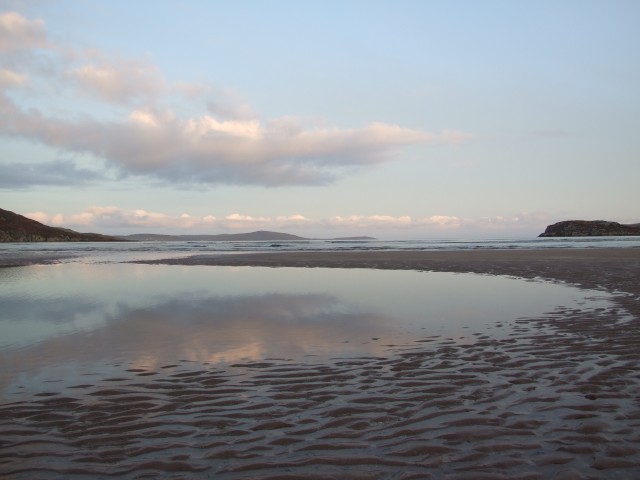 Aware that time was ticking ever on, I snapped as much as I could and left the beautiful Little Gruinard beach, only to come across the superb viewpoint further up the hill

More pictures ensued and I found it very hard to leave this astonishingly beautiful part of the coast. But, camera laden with Gruinard Beach and Bay photos, I left to find the Slaggan beach walk I had intended to complete as early as possible. Gruinard Bay from the Viewpoint

As I stated earlier, I simply couldn't find the start point of the walk. Truth be told, I didn't really try that hard. Well, I didn't want to look suspicious lurking around at this early hour although the locals here at Achgarve, I'm sure, are used to it! Anyway, I had the directions for The Mellon Udrigle walk with me as a possible additional walk or alternative for just such an occasion, and decided to press on to said beach. I have to say that the beach here was a little disappointing after Little Gruinard, but I didn't really take the time to explore as I wanted to get on. As usual I had spent too much time taking pictures along the way, and as I wanted to get back home a little earlier this week, I needed to complete the walk. So off I set along what I think should more properly be named the "Mellon Udrigle Beach,Coast,Hill and Bog Circuit"

I know it sounds sarcastic, but honestly that's it in a nutshell.

Following the faint path/vehicle track, I was anticipating an easy enough trek and I wasn't disappointed. The going was a little more strenuous than I had expected, but nothing at all really. Probably the ascent to the first of a series of cairns was the hardest part as I had been originally going to be on a grade one walk and this was of course, a grade two. The scenery was superb although the sky had become a little dull by now, and I can't say I wasn't disappointed at that. The views were as one would expect from this area, Gruinard Island and the Summer Isles, Coigach and Assynt and with Stac Pollaidh and Suilven also visible in the distance, gave a feeling of being shrouded in Scotland's finest mountain landscape! 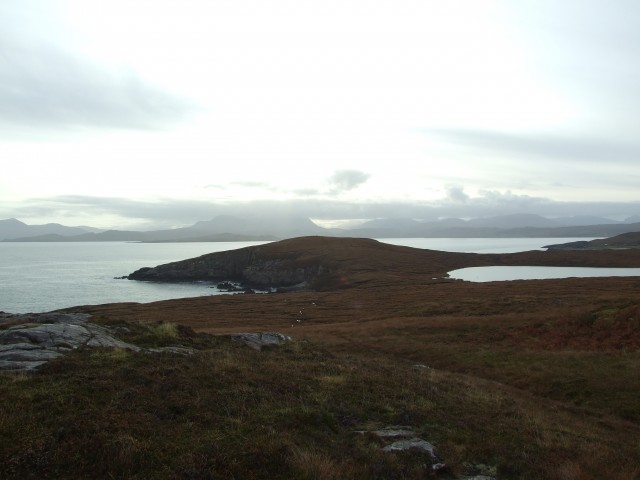 Impressive rocky outcrops are apparent as you look down toward the coastline, great slabs of craggy rocks! Under foot is not so solid though as I found out on several occasions when it was very easy to miss what was now a fairly indistinct path across the heather and peat bogs. Having said that, It was just as expected. No surprises either when the final descent landed me at the rocky beach at the Allt Loch a Choire, where I saw three grey seals basking on the rocks. I managed a few shots of them, but I was too far off, and when I ventured too near, they, of course, disappeared underwater. 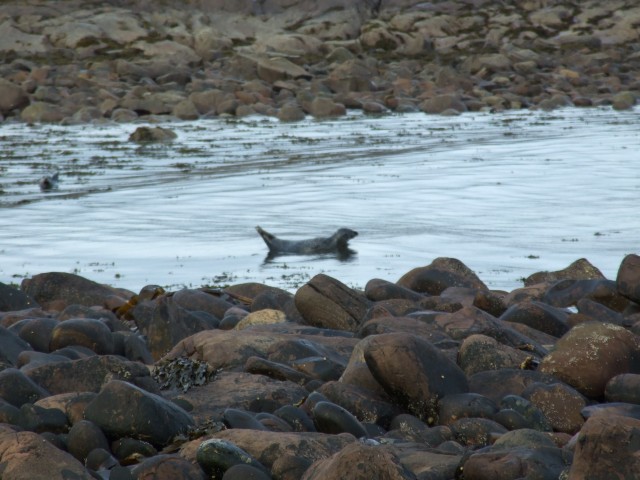 After a treacherous stumble back up the beach over seaweed strewn rocks, I came across the ruins mentioned in the guide. Nothing exciting here I thought, except more photographic opportunities of course.

Then it dawned on me that I had strayed way off the path, and the terrain was such that I couldn't really make out where that path was!! I had to, therefore, struggle across bogs to reach the well defined final approach path which took me back to Mellon Udrigle and the beach car park. It was on this final part of the path that I met the only other human beings out walking here. A middle-aged couple just setting out on the reverse to walk I'd just completed. We exchanged pleasantries and I bid them good luck as I trod back to the car, where I opened a welcome flask of tea. All in, the walk took me around an hour and a half to complete.

I feel it worth mentioning that despite the disappointment of not finding the original walk star, I thoroughly enjoyed my trudge over the Mellon Udrigle hills, and although the weather was dull during the walk, the effort was made well worth it by the sunshine and scenery I witnessed on my return journey via Little Loch Broom and Loch Glascarnoch. A couple of pictures of which are below 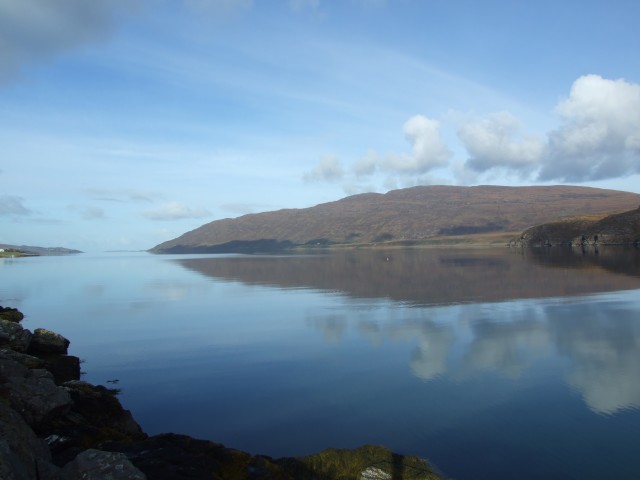 That last photo is amazing

Thanks Suzie! It's nowhere near the best of them though

You did well to get a good shot of Loch Glasgarnoch. I always find it a fairly bleak place, probably due to the low water level and the ugly dam

Yeah, fully agree there - a beaut of normally a very plain looking place!

Yeah, fully agree there - a beaut of normally a very plain looking place!

Cheers guys! I agree about the bleakness of Glascarnoch, but I got loads on the day. Here's another: Just to expand a little regarding the pleasant Rubha Mor peninsula. When it is grey and wet in the close by hills an escape is possible.

There are a least a couple of places for pleasant single pitch climbs on the coast.....and a potential developement opportunity at slaggan. 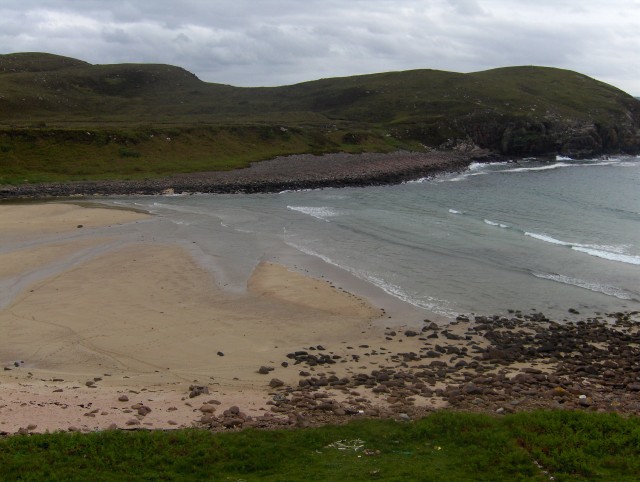 Looks as if it could be reached with fewer kls. from Mellon Charles...have not been in this way. 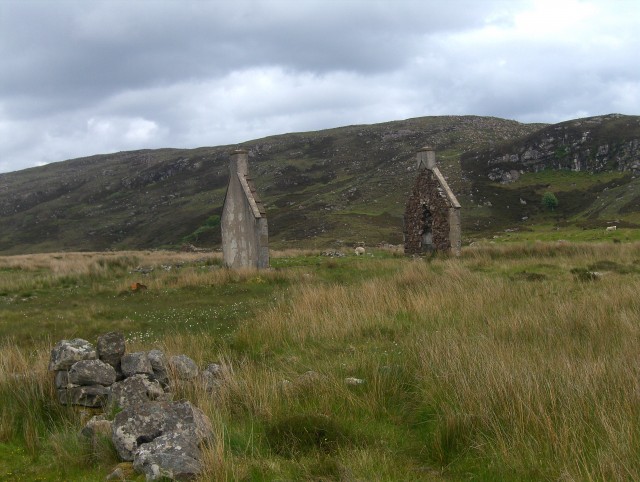 Situated above the beach area....I guess that it must have been constructed of wood between the stone gables?

All very interesting gaffr, but any particular reason why you decided to hijack my post to convey this information??

No highjack intended. Simply a way of conveying some extra information to a reader perhaps intending to go to the Rubha. I think that I also read that you were heading towards Slaggan and then decided not to....so it having been mentioned I provided a couple of images. Since this is a forum concerned with conveying informatiom to walkers etc. I can't really see this as being a problem.....I have been trying to give some information to the forum over the past few months in a completely open and honest way

.....I would never consider myself as being a highjacker....and from what I can remember, that after posting in the past, folks have added comments and images to my scribbles in an open way....it would appear to be the way that things work out around here. In fact I would definately welcome comments, criticism, derision or whatever. Maybe what I also trying to say that the Rubha Mor is perhaps deserving of a walking route that would link the two sides of the peninsula with a circular trail.

From what I can recall I don't think that there is a description of this on the forum?

Great set of pictures there, looks like a lovely place

Loch Glascarnoch would get my vote as the ugliest loch in Scotland but you have made it look beautiful here.