The Year of the Donald? A weekend at Over Phawhope

The Year of the Donald? A weekend at Over Phawhope

Much as I like a good public transport adventure, I couldn't be bothered this weekend so got hold of a car instead. As it was on hire and I'm a cheapskate, I didn't pick it up until Saturday morning, which made for a short day of walking. No matter, as the best weather forecast was for Sunday anyway, with snowpocalypse being forecast for Saturday in the Borders.

I headed over the Pennines and up the M6/M74 not knowing what to expect in terms of road conditions, but knowing I could walk into Over Phawhope bothy from the Moffat road if necessary. In fact I had changed my plans repeatedly while looking at the weather forecast over the last couple of days, and landed back at Plan A again

. The road conditions turned out to be far milder than expected, so I decided to drive right round to Glen Ettrick, making the carry into the bothy much easier. On the way past, I decided to stop off for a quick ascent of Herman Law, which I had missed previously.


Herman.gpx Open full screen  NB: Walkhighlands is not responsible for the accuracy of gpx files in users posts
Parking in a layby just south of Kerrcleuch, I took the shortest line to the summit. The snow was fresh and soft, and not particularly deep either, so I was up in no time. As expected, nothing much to see here, but a good stretch of the legs before the long drive round to Glen Ettrick. 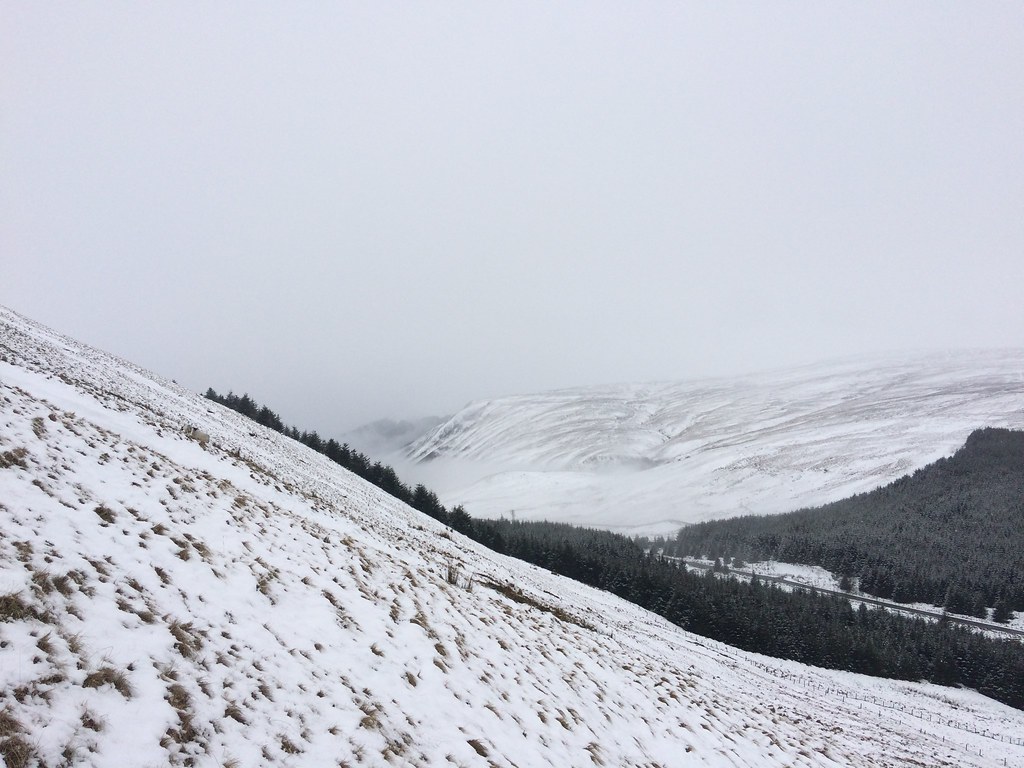 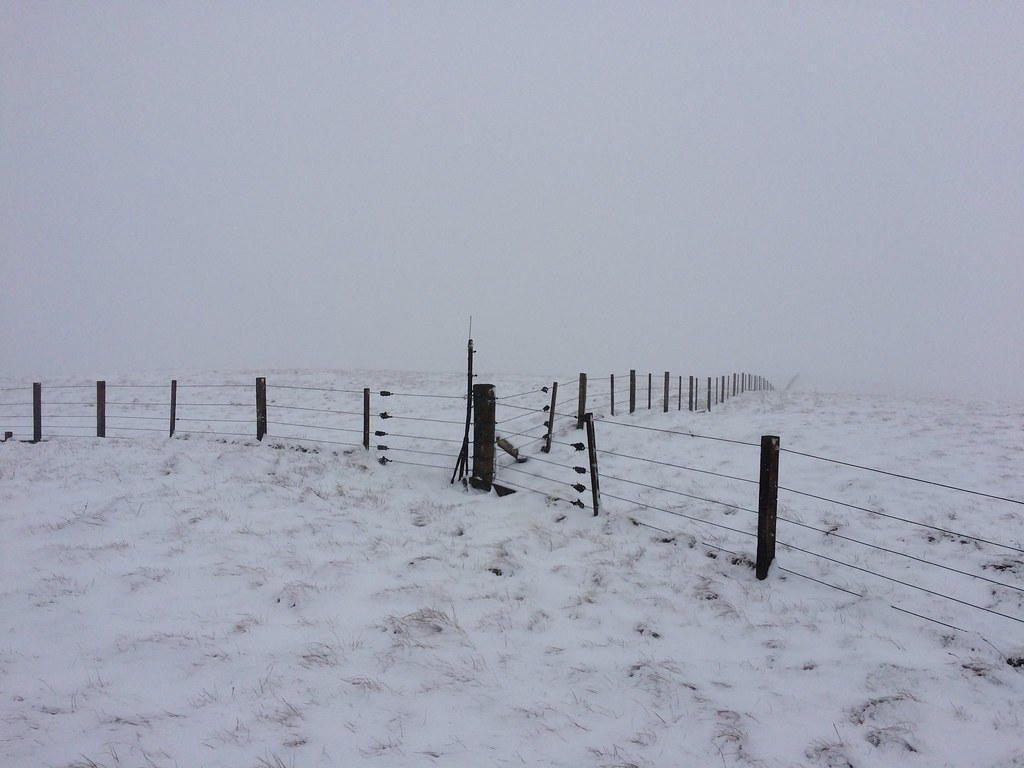 Unfortunately I can't find my camera - it's either down the back of cupboard somewhere or sitting in a muddy puddle in Moffat Dale somewhere. I'm more annoyed about the pictures that were on it than the camera itself, and as a result, this report has the bare minimum of photos - glad I took a few on my phone. Not that it makes much odds for the next bit of the report, as most of the photos I took look like the two above anyway!

The road up the Ettrick was fine until the last half mile, then it got quite snowy. I managed to coax the car to the parking area at the end with no problems though, and decided not to think too hard about what it would be like tomorrow if it iced up some more. I remembered that the walk to the bothy was short, but it was even shorter than I thought, and I was there less than 15 minutes after leaving the car!

There were a couple of other occupants - Mark and Linda - who I chatted to briefly before heading back out to go up some more hills. I've always said that I'll never finish the Donalds, then added 'as long as I live in the Highlands'. Still not sure if I'll be bothered with them all, but their appeal certainly increases when they are only a couple of hours away! Although I made my way through a large chunk of them in 2014 when I spent a week backpacking through the Southern Uplands, I left a lot of stragglers and outliers which I now had my sights on.


Phawhope.gpx Open full screen  NB: Walkhighlands is not responsible for the accuracy of gpx files in users posts
Loch Fell was my main objective, and then hopefully Capel Fell and Smidhope Hill if I had time. I headed up the forestry track behind the bothy until I left the woods and passed into Dumfries and Galloway on the Southern Upland Way. At this point I aimed for the NE ridge of Loch Fell, where the snow was deeper than it had been on Herman Law. There was nothing to see at the trig point, but aside from some half-hearted snow falling, it was fairly calm. I crossed West Knowe and descended steeply back to the Southern Upland Way. The cloud had lifted a little and there were now good monochrome views to Croft Head - the most impressive hill in this little area. I was glad to get the chance to see a bit of Craigminchen Scar as I followed the SUW NE, as last time through here I had barely been able to see my feet, despite it being the middle of July.

I decided I had enough daylight, so after crossing the little metal footbridge over the Selcoth burn, I headed steeply up onto Capel Fell. Back in the cloud, I briefly checked the compass to see that I was following the correct fenct - navigation is easy up here once you have started off in the right direction. Smidhope Hill and White Shank followed in quick succession with no views either, but it was after 5pm on the final summit and the light was still good - the end of winter finally in sight

. I could see a break in the forest on the map where a burn was shown - following this and running through the soft snow, I was back at the bothy within 15 minutes of leaving the summit

The weather looked promising the next morning, and I was back at the car shortly after 9am. Fortunately the road conditions weren't any worse, and the drive back round to the Moffat road was lovely, the sun gradually coming out more and the clouds clinging to various hillsides and looking mysterious. There were reflections in the still St Mary's Loch, and by the time I had parked up at Blackshope, it was a truly lovely morning. This is the part of the report where the missing photos get more frustrating


map.gpx Open full screen  NB: Walkhighlands is not responsible for the accuracy of gpx files in users posts
I think I had intended to do this route clockwise, but before I knew it I was halfway up Saddle Yoke as it looked too nice to ignore

. By the time I was approaching the summit cone, I was in deep snow with a slight crust on top. While it was irritating to walk in, it was absolutely stunning to look at and the ridge between the two summits felt like a proper mountain in the Highlands. I had liked the look of Saddle Yoke when passing by in 2014, but not enough to divert over it. 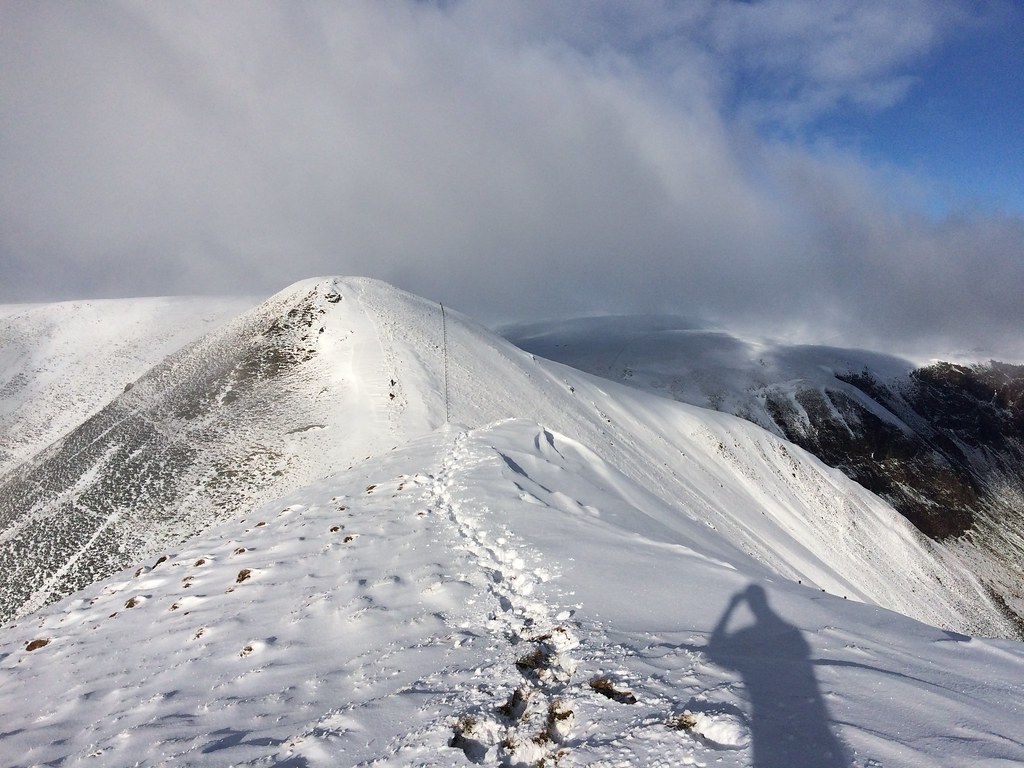 I chatted to a couple of guys from Glenrothes on the summit of Under Saddle Yoke, then stopped for a quick bite, thankfully taking a couple of photos on my phone as well. If only I had done some more of that later! I was starting to feel less sure about my plan to include Whitehope Heights after seeing the depth of the snow on the plateau. 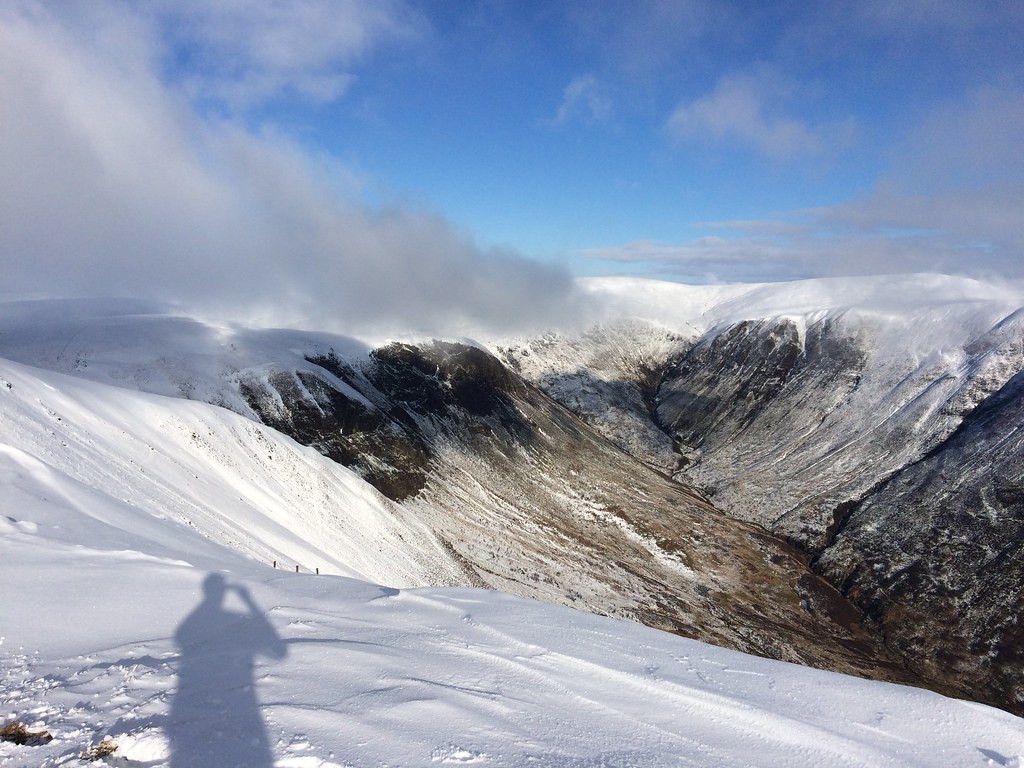 Looking across Black Hope to Hart Fell, you could almost kid yourself that it was Garbh Choire in the Cairngorms today. The other side of the ridge, looking to Carrifran Gans was almost as good. 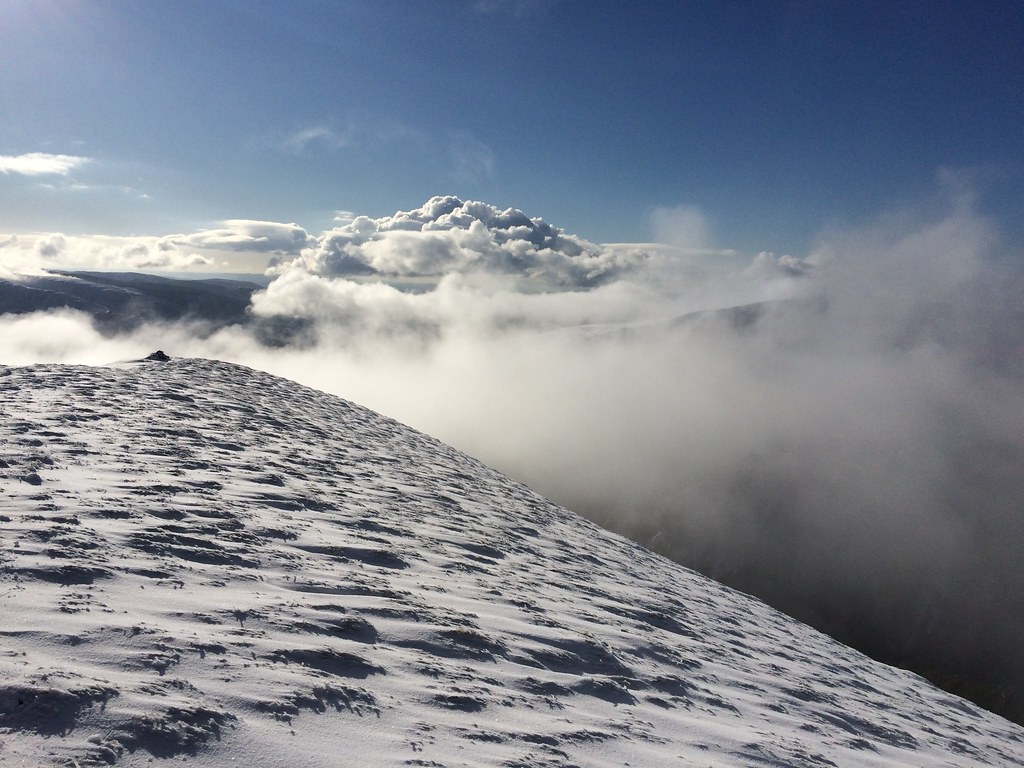 It was a bit of a trudge over to Cape Law, but luckily the trail was already broken. I caught up and passed the two guys, and after Cape Law, I decided to take in the New Donald of Din Law. There were still footprints to follow, and great views down Fruid Reservoir. By luck, the footprints carried on my intended route towards the back of Hart Fell, so I kept following them. Later on, they clearly weren't going to take me to Whitehope Heights, but I was making good time and the weather was so good that it seemed rude not to include it. I hoped it would mean that I'd be coming off the hills in the last light, which is my favourite time of day.

The contouring round the back of Hart Fell wasn't as bad as I thought it would be, and before long I was climbing up the incredibly steep slope onto Whitehope Knowe. I had to reverse this then go up the identically steep back of Hart Fell to get back on the more traditional horseshoe route.

I was pretty lucky. My second time up Hart Fell and good weather again! Much more interesting this time though with the snow. Interesting but hard going - there was still a lot of distance to cover before losing much height, and the snow was getting deeper if anything!

Now some more annoyance as I can't include any photos of the red glow on the Ettrick hills, or the sunset just visible behind Criffel and the Lowthers. It was a right trudge over Swatte Fell but the beauty of the evening more than made up for it. Nevertheless, I was relieved when it was finally time to get down below the snowline. Somehow I missed the best line lower down and ended up descending extremely steep grassy slopes to the Blackhope Burn.

Back at the car I met the guy who's footprints I'd been mostly following. Unfortunately he had managed to get his car stuck in the mud of the layby, and couldn't move it. After trying for a good 40 minutes, we admitted defeat and he went to phone the AA. I felt a bit bad for leaving him but there wasn't much else to be done really. So it was back to England via a chippy at Gretna, which topped off a great weekend.

Re: The Year of the Donald? A weekend at Over Phawhope

Smashing hills that hart Fell round! Even though I saw next to nothing when I was there you can get a sense of it

Totally sucks you lost the camera. I’m always really OCD about checking, well everything, but especially my camera as it’s all your memories. Hope it shows up

Re: The Year of the Donald? A weekend at Over Phawhope

Looked a great weekend indeed. Bloody annoying losing your camera though isn't it? I've lost two cameras now, the second one being an RX100 I'd paid £250 for only a week before losing it! It had lots of winter Munro pics on it too, which was worse than the financial loss. Devastating!

There's a lot of fine hill country in the Southern Uplands isn't there? Seems incredible that I never bothered with them until only a few years ago, even though they're within an hour or two's drive for the most part. The Moffat hills were something of a revelation and I'm definitely hooked now; I'm not really into lists but I might well try to complete the Donalds.