Day 3 of hillwalking from our holiday base in Aberfeldy. The plan for today was to climb Meall Corranaich, Meall a Choire Leith and Meall nan Tarmachan (along with the ridge if time or weather permitted). Once again, on leaving (with the rest of the family still in their beds) Aberfeldy not long after 7.30am the weather was dry but overcast with low cloud. It got rapidly worse on the approach to the Ben Lawers main car park where I planned to start my walk.

My plan was essentially to mix 3 routes together, ie katiebryso’s route from the main car park initially towards the bheallach between Beinn Ghlas and Corranaich before branching off north west up to Corranaich, then to a Choire Leith after which I would link up the WH route back down to the cairn at the Lochan an Lairige road and lastly walk the road north and west to 583417 at which point I planned to follow a track south to 580405 from where I would head SSE to Tarmachan and then the ridge or return back the usual way to the car park.

GPX of my track truncated due to number of trackpoints

22 MCorranaich_MaChoireLeith_MTarmachan_activelog 13oct2010 trunc.gpx Open full screen  NB: Walkhighlands is not responsible for the accuracy of gpx files in users posts

I left the car park in the thick mist hoping that it wouldn’t stay this way all day. The track was easy going and I was soon at the point where the track splits to go either NE straight up Beinn Ghlas or NNE to the bheallach; it’s easy to pick the wrong track so stick to the left. The mist did clear a bit before reaching Coire Odhar to allow me to get some pictures but it then closed in again. I continued on up to the bheallach at which point the track divided; east to Beinn Ghlas and west to Corranaich. As katiebryso had explained in her diary, there was a track all the way up the hill; even though it was steep in places, scrambling was not required and I did not have to use my hands at all.

The mist cleared again nearing the top of Corranaich and I had great views up the summit from there. However, it was evident that the cloud level was fairly high as I could only see the tops of the higher surrounding hills. It’s a fairly flat top which extends both downwards to the south and to the north towards a Choire Leith. There are excellent views of Ben More, Stob Binnein, An Stuc and Meall Garbh to the east. I could also see the top of Meall Tarmachan above the cloud to the south west. 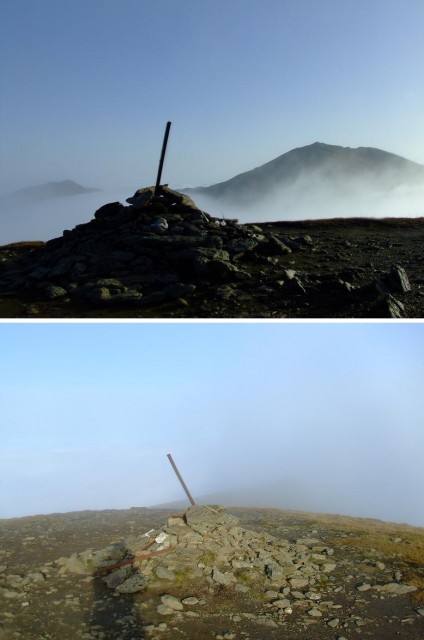 Having stopped to take photos and enjoy the views, I headed off north to a Choire Leith. Initially I could see the ridge ahead but as I dropped downwards the mist and cloud closed in again. Before long I couldn’t see much again. I was very conscious of ensuring I kept on the right direction as the WH summary warned about not taking the obvious NNW line. I came off the track and headed NW in the thick mist where I managed to pick up a track partially along the side of a burn all the time knowing that I couldn’t stray to the east because of the steep sides.

The going was easy under foot and I was soon climbing up a Choire Leith. The top is lower than Corranaich and was initially shrouded in cloud when I arrived. I waited a bit and fortunately the cloud cleared to allow more pictures again of the surrounding hills appearing above the cloud line. I headed off in a SW direction towards the cairn on the Lochan na Lairige road and into the cloud. There was a track for most of the way albeit faint and disappearing in places. It was also fairly boggy in many places but I don’t think it was as bad as I was expecting - possibly because there hadn’t been any rain recently.

I came out the cloud close to a small dam in the upper reaches of the Allt Gleann Da Eig which flows northwards. I kept heading SW past a small waterfall before picking up the good track on the last section before reaching the road. My original thinking at first had been to head SSW up to Tarmachan but I was concerned about the rocky outcrops on the map. I walked round the road to a small car park at the point where the road turns from west to north. I crossed over a small burn and found the track which headed south. The going was easy and it wasn’t long before I got to the end of the track at around 580405. As I could see the cloud and mist a little further up the hill, I took a reading with the plan of heading SSE aiming to arrive at the ridge track a little to the west of the summit as it looked like there may be rocky sections to the north of the summit.

Just to be doubly certain in the mist, I followed up the west side of the more westerly of two burns which flowed down the hillside. Further up the burn split twice and on both occasions I stayed with the more westerly stream. This made navigation a lot easier. Although there was no track to follow, the ground was soft underfoot albeit a little boggy in places - that said, it was a fairly hard walk up as the terrain got steeper and steeper. Eventually I reached the ridge at the top and headed NE to the summit of Meall Tarmachan. It was still very misty and, as I could hardly see anything, I decided to leave walking the rest of ridge to a day with better weather. I sheltered from the wind just down from the summit cairn to have lunch and some hot coffee.

Batteries recharged, I headed off to the south down the track to the SE top and then back down to the road. The mist did clear very briefly on the way down and I got some photos looking back at Tarmachan. 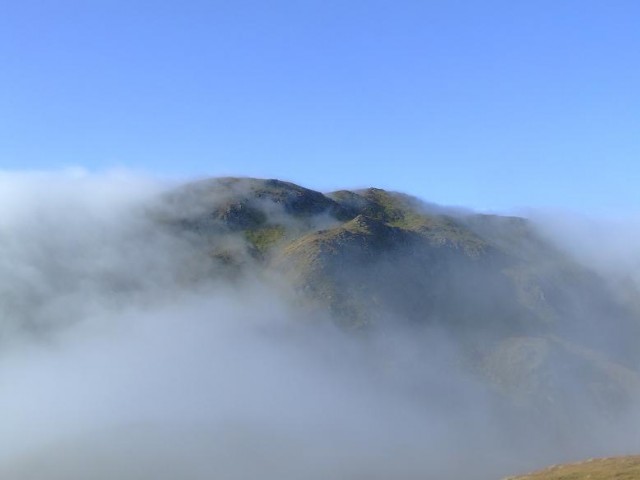 It closed in again and didn’t clear until I got much further down. On reaching the road after passing the small car park which is usually used for the Tarmachan ridge and crossing the bridge, I walked back to the car at the main Ben Lawers car park - it now contained a lot more cars and I could see all round and up to the lower reaches of the surrounding hills before the cloud line started.

Some good photos again there - I don't think you need photography lessons! You were lucky to get 2 days worth of inversions. We had dreish weather for Corranaich and a' Choire Leith but we were lucky to get a good day for the Tarmachan Ridge when we did them. I feel very bad looking at that poor cairn on Meall a' Choire Leith as that's the one Richard and I accidentally demolished (as per my report last October) when we were trying to rebuild it slightly

Thanks MC. Had a quick look back at you report and now remember reading it before and your comment about the mountain shouting ‘hooligans’ and ‘vandals’ at our backs

Nice inversion Rockhopper.
The ground below Choire a Leith was the worst bog I have been in when I done this so you were lucky.

Interesting route up Tarmachan. I done it in a way that no one else seems to have done. I started at the road down to Lochan Na Lairig just south ot the cairn, walked north up the fence line and then south west along the boundary line crossing the fence after 1.5km (7 foot high) and then continue for another 1km to the summit. I then walked back the way I had come so I have never been along the ridge. Need to go back some time. Cheers monty. I think you may have gone up via or close to the crags of Creag an Lochain. I wasn't sure about trying that in the mist and low cloud and opted for what looked like a more straightforward route up the side of Coire Riadhailt.

Would agree about the ridge - I'll need to go back sometime and walk it as well.