The weather on this particular Sunday appeared to be offering what one can only dream of - a perfect winter day blessed with sunshine and a tad of high pressure! After a couple of days of full on winter conditions the hills were beginning to look perfect to test out my skills (& kit) attainted on my winter skills course at Glenmore Lodge over a year ago... Last winter, 2016/17 was rotten, or technically good depending on your outlook - I will stick with rotten, i.e. limited snow

Andrew, Callum and I headed up in the Laggan direction with the aim of completing the full Creag Meagaidh circuit on the Sunday. In order to stand any chance we lift shared from Perth and stayed a night in the Àite Cruinnichidh hostel just a 10 minute drive from the Creag Meagaidh National Nature Reserve car park. Personally I would highly recommend this hostel for anyone hoping to get a similar early start - it was full of walkers / climbers / skiers, you know the types.

Setting off from the hostel at 06:05 Callum's car offered a stark reminder of the fact it was winter in the form of a minus 11 reading

. Brrrrr. Thankfully there was no issues starting the car or getting to the car park. After a quick couple of shots attempting my best to balance the camera on the information sign we heading off in the pitch black, aided by a strong moon at 06:30. 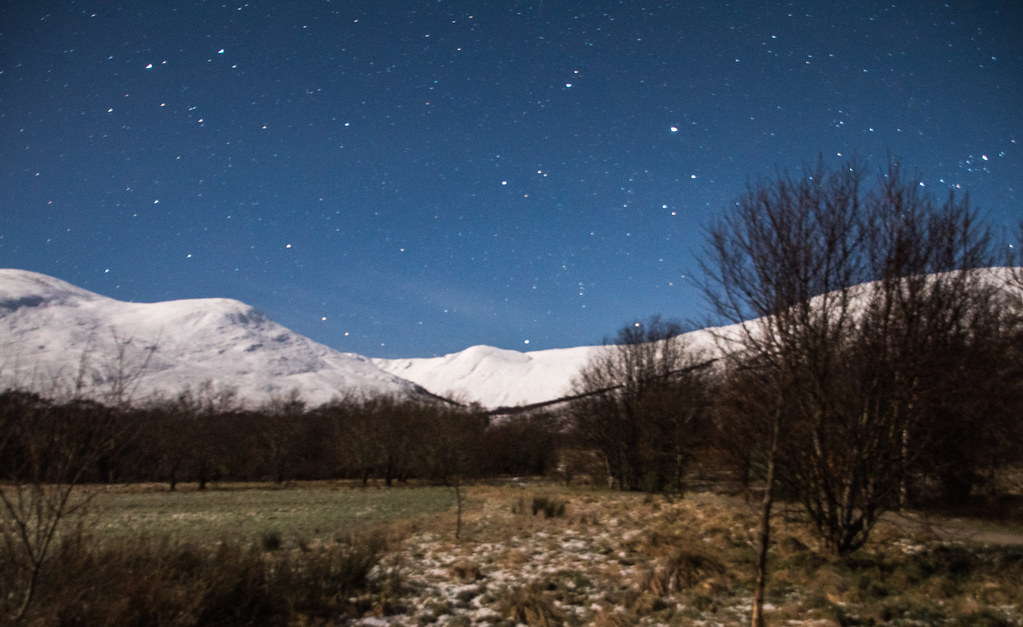 . In the dark we made a slight navigational screw up and missed the intended route up towards Na Cnapanan. We must have only been off by about 100m, but in the poor lighting we opted to just take the direct route up through the trees instead of wasting time retracing our steps in an attempt to find a potentially snow buried alternative route.

Unsure if this was the correct decision or not but it took us up a slightly steeper route before finally reaching the intended Na Cnapanan. This steeper section produced waist deep snow drifts which often required more of a swimming motion than the intended hill walking motion to make any progress. Although quite "fun" it severely hindered progress and was energy zapping!

By the time we reached Na Cnapanan the sun was lighting up the sky. 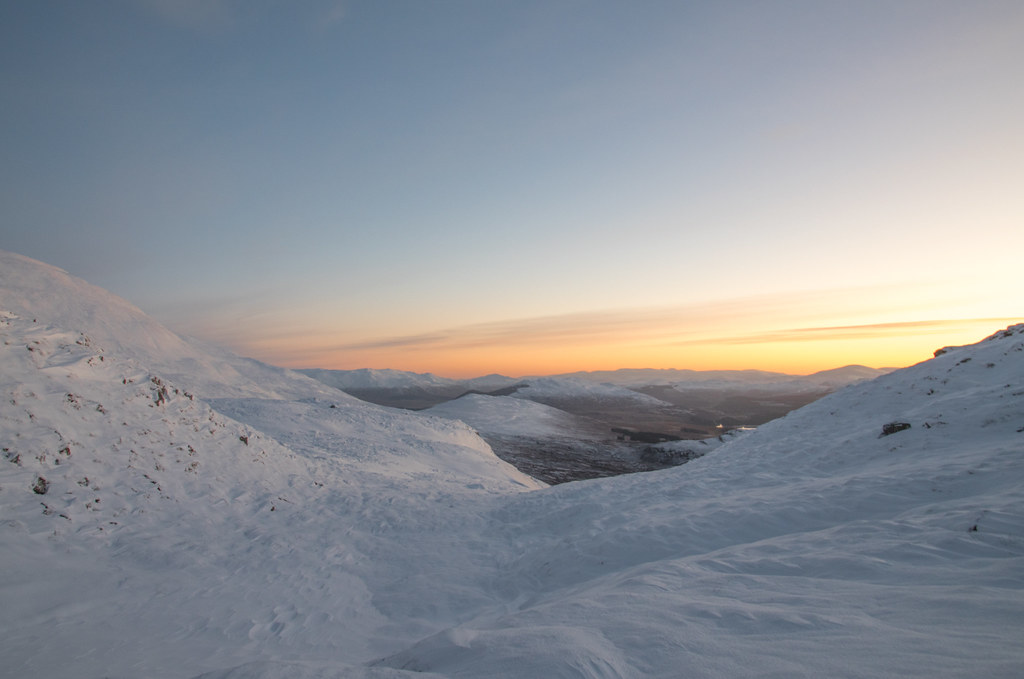 Rising sun and remaining moonlight offered he first clear glimpse of "The Window". 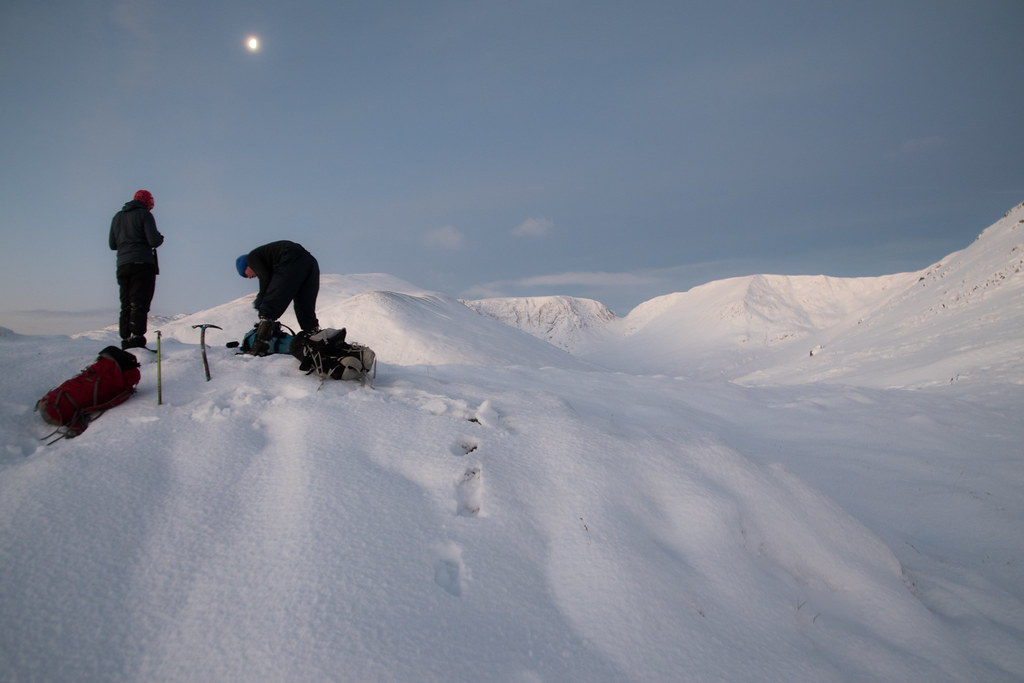 I think it became clear early on that we were going to struggle to complete the full circuit as originally intended. Our back-up plan had always been to descend down from The Window, avalanche forecast depending, alternatively reach Stob Poite Coire Ardair and retrace our steps, which was obviously the less preferable option.

We continued to make slow but steady progress up Carn Liath, but as the first group out on the hills the snow was fluffy, deep and untouched. To make matters more exhausting due to the incredibly low temperatures the top layer of snow had turned into a nice icy crust which would occasionally tease you by supporting your full body weight before sending you jerking through. Tough to describe but remerkably close to finding a box of Quality Street before opening and revealing reminisce of an old sewing kit.

A selection of snaps on route to summit 1 - Carn Liath 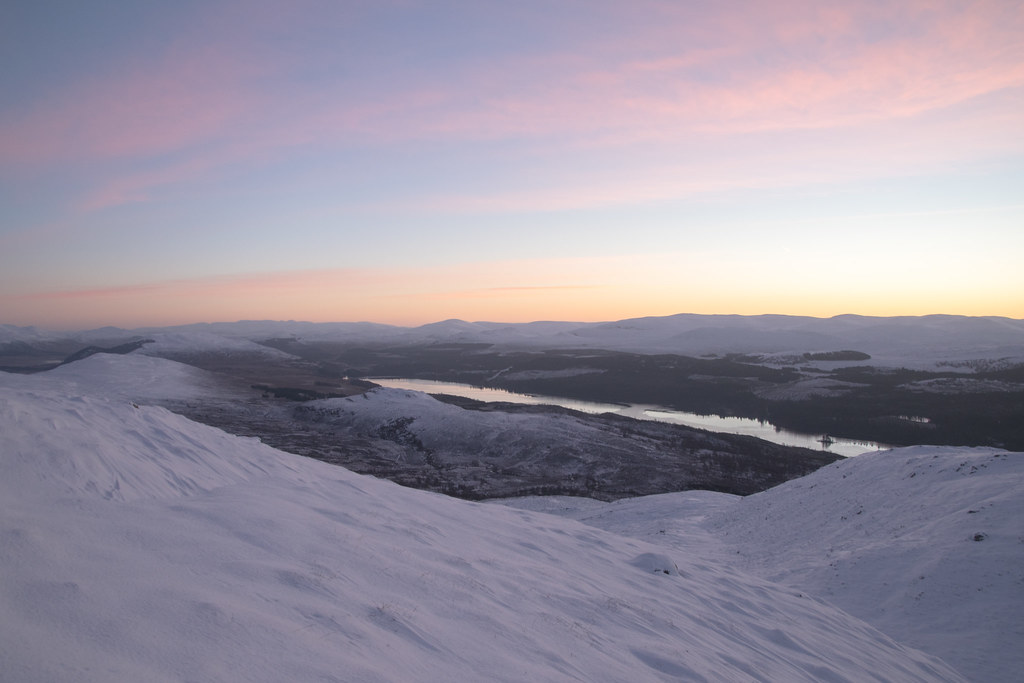 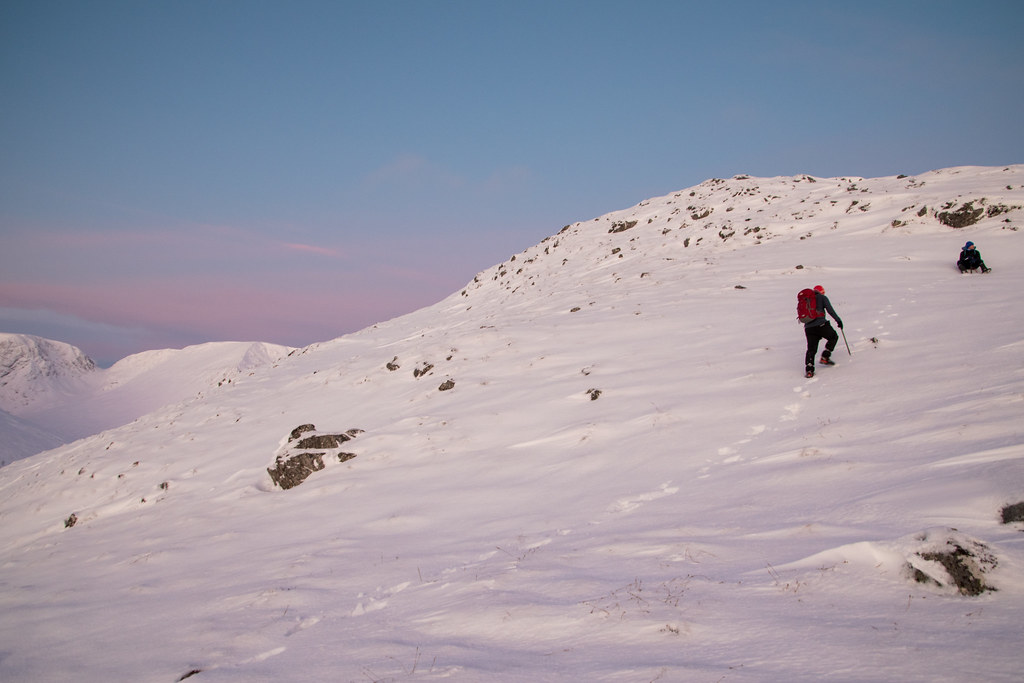 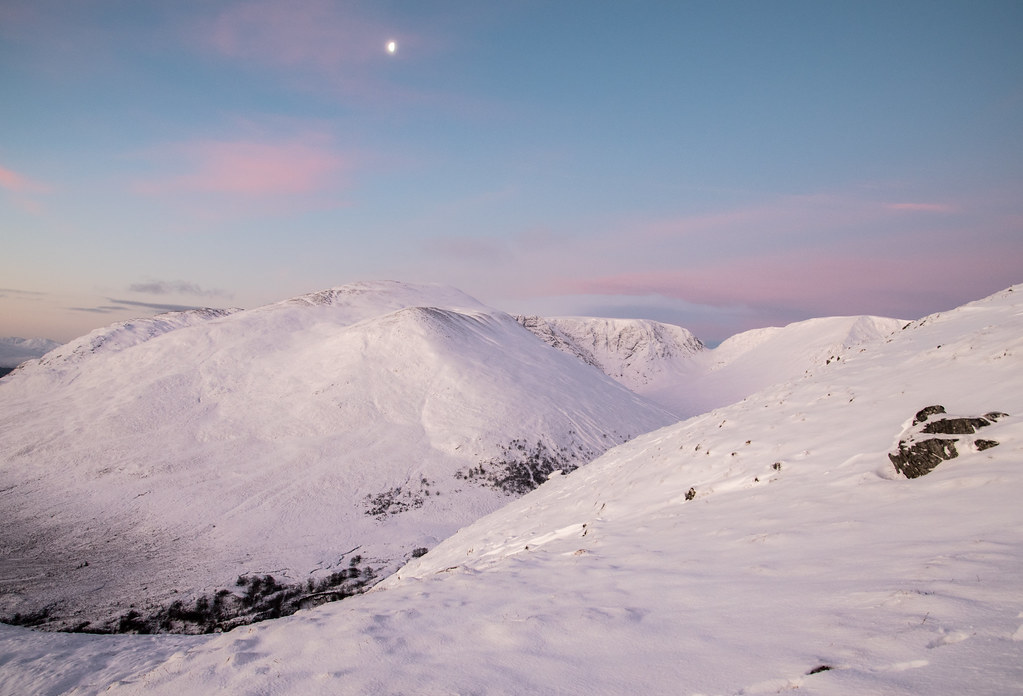 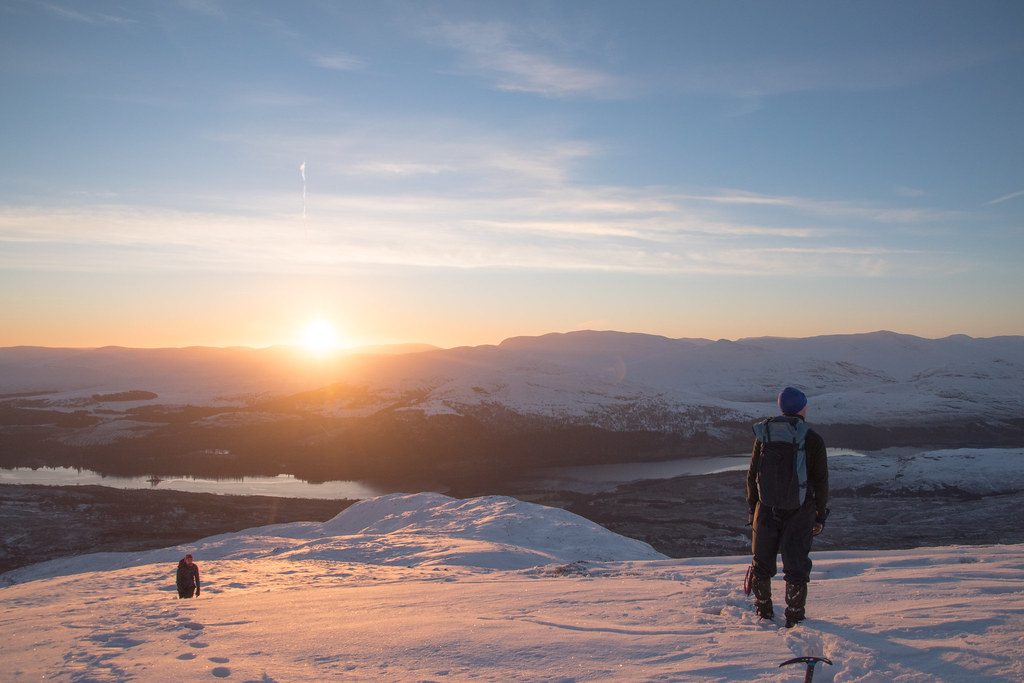 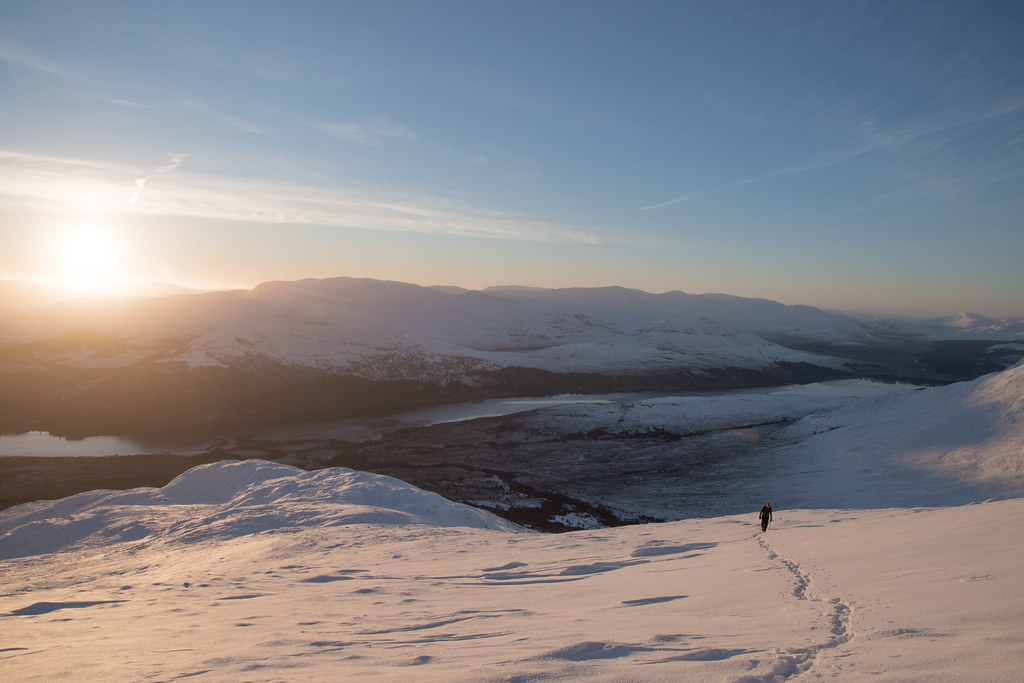 The three of us seperated slightly and went along at our own pace for the final kilometer up towards Carn Liath. Although the incline is gradual the snow surprised me at how much slower my progress was in comparison to normal. I remember sledging down hills and running back up tens of times in a single afternoon only a decade ago!

Views from Carn Liath waiting for Andrew and Callum - Munro 86 for me. 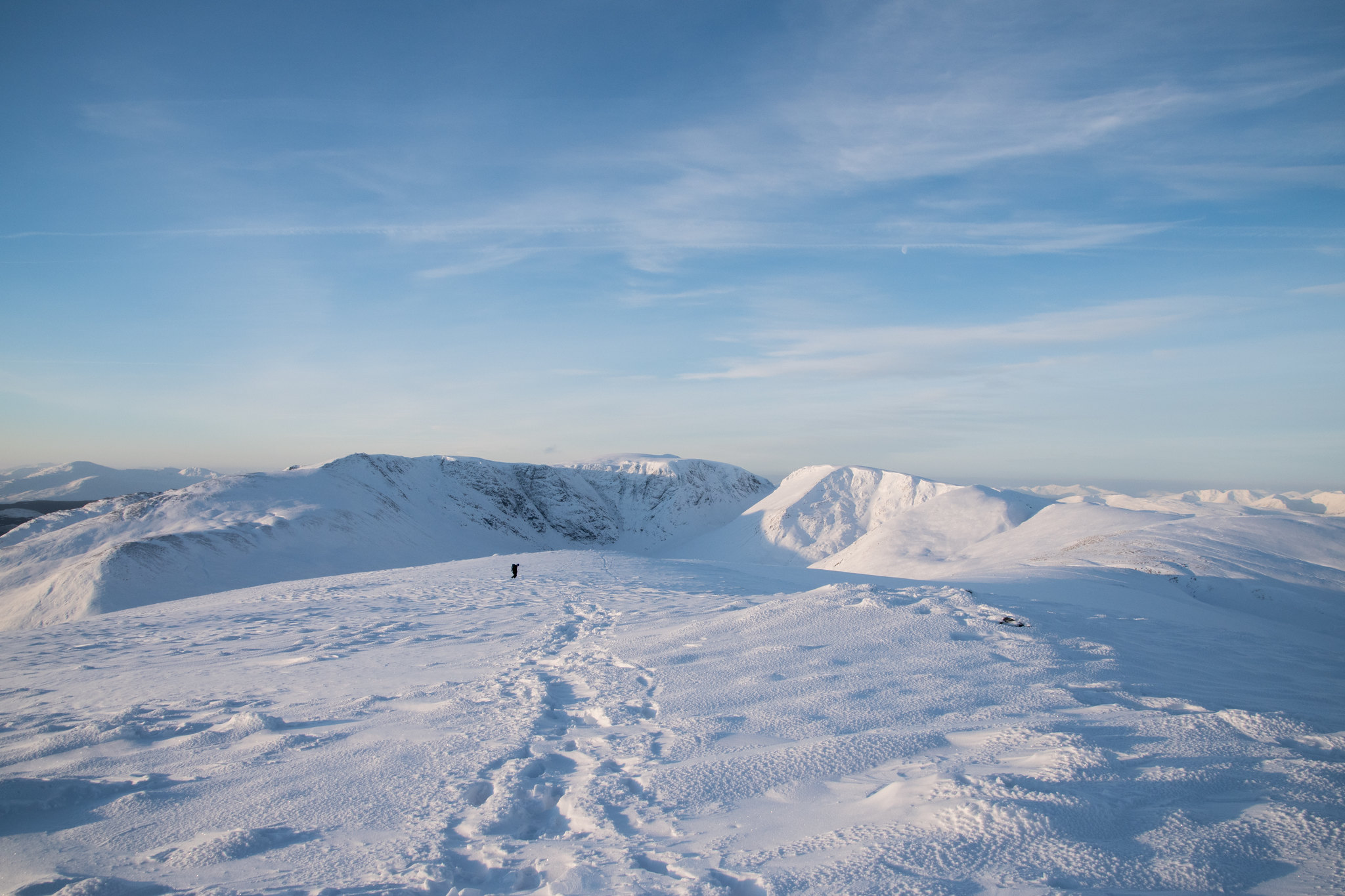 We had all reached the top by 10:00 which was slow timining considering we had set off from the car park 3.5 hours earlier. Whilst still possible to get all the way to Stob Poite Coire Ardair and then up to Creag Meagaidh it would likely mean a walk back to the car in the dark and leaving little room in case anything went pear shaped.

Unanimously we agreed it was unlikely we would make Creag Meagaidh but if the snow was iced up enough we might make good time in reaching Stob Poite Coire Ardair then we could revise our plans again. Also unanimously we agreed that it was baltic and we would not linger on Carn Liath for any longer than a quick bite to eat. It would be interesting to know what the lowest temperature we faced was but with the slightly stronger winds on Carn Liath it felt pretty brutual 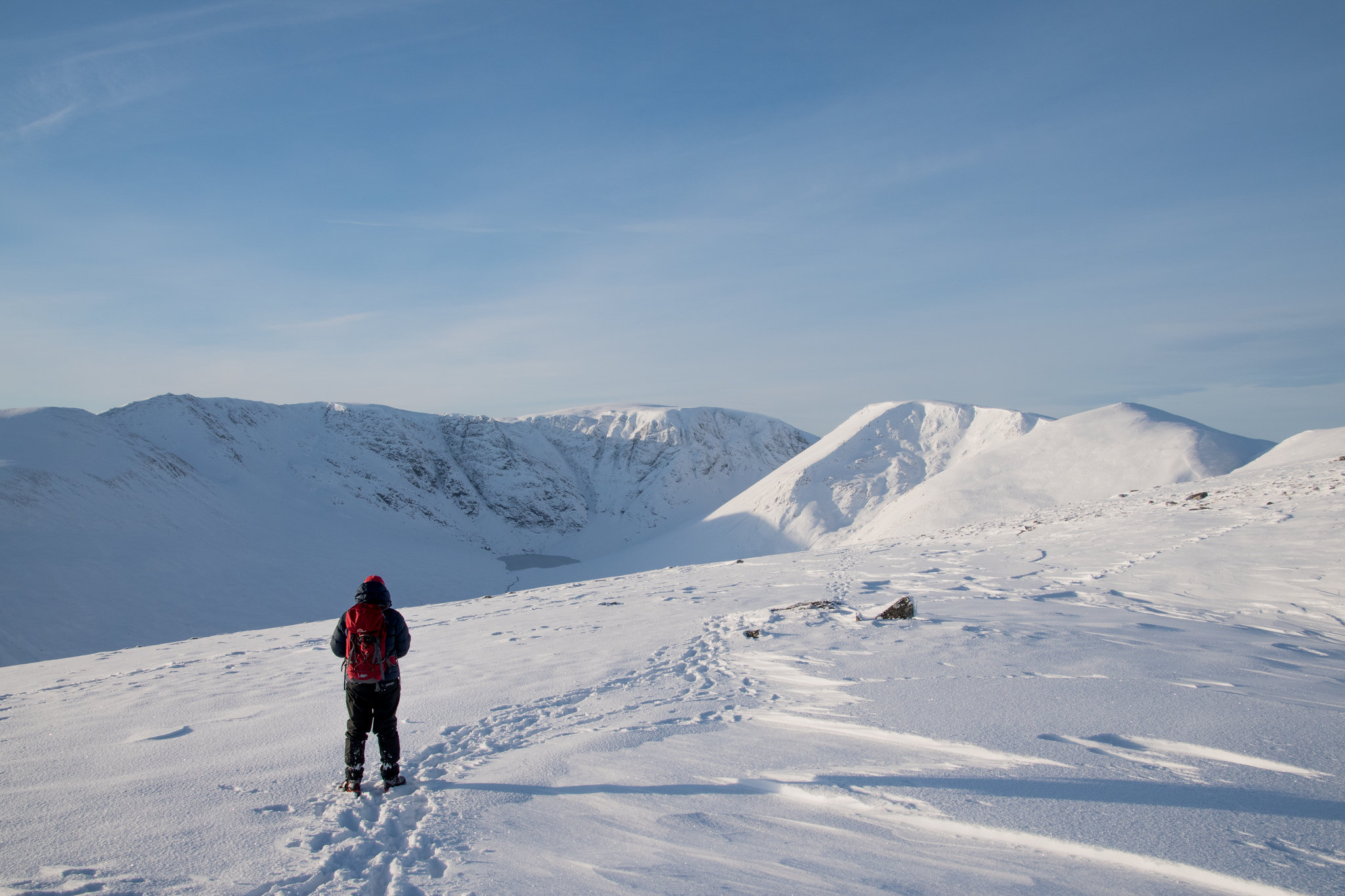 Although we appeared to have met the reminince of some old paths these offered no ease for walking. The crunchy snow had just not had long enough to consolidate and every step would offer that faint hope of needing to get the crampons on before ending up ankle deep in snow.

At the time I was more engrossed by the amazing scenery to actually notice that the clouds had appeared to have rolled in. Thankfully the base of the cloud was several hundred meters above where we were walking so this was quickly forgotten about.

The next batch of photos are from our long and tiring walk to Stob Poite Coire Ardair. 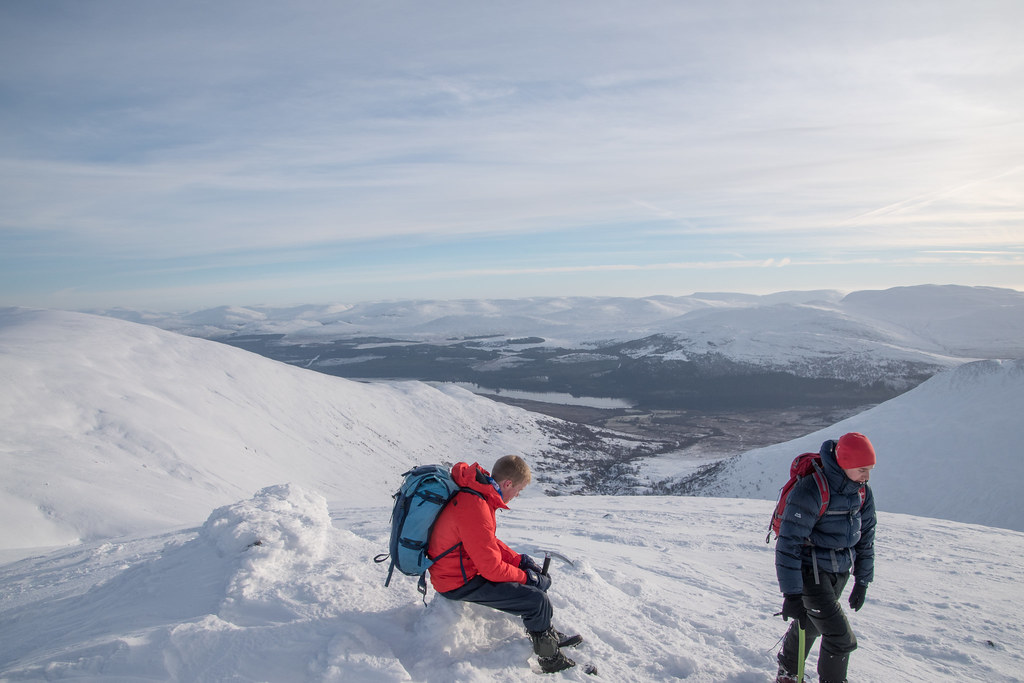 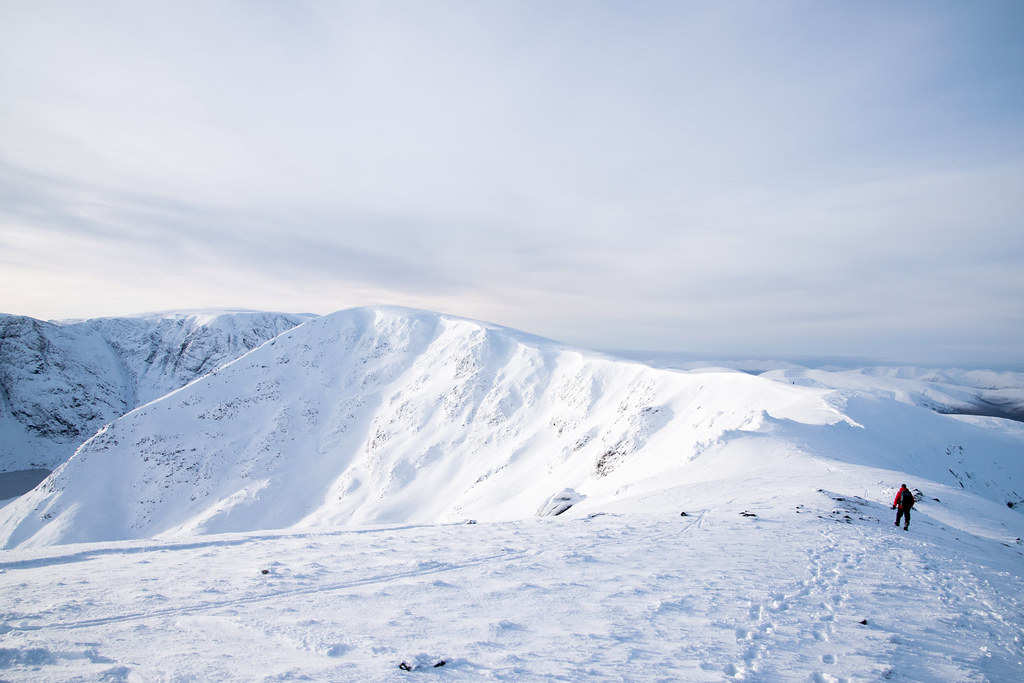 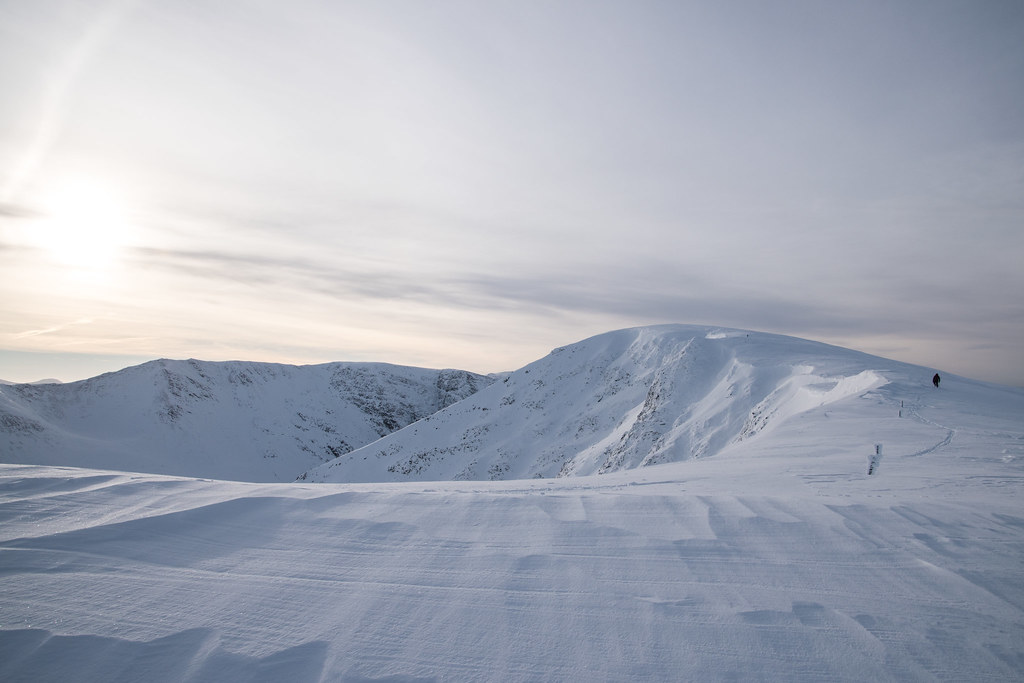 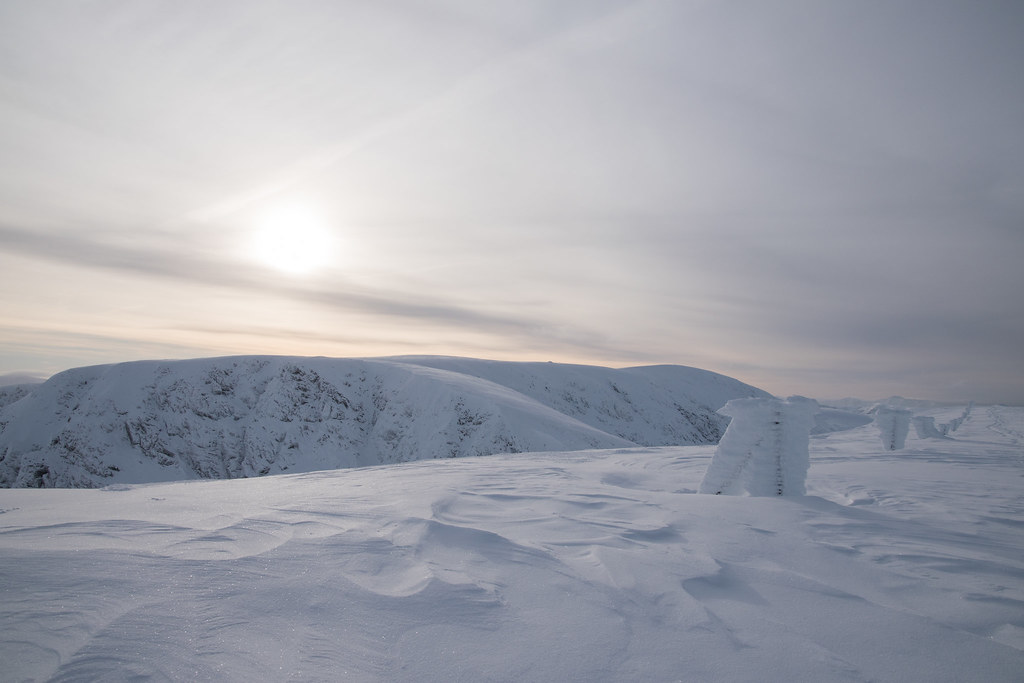 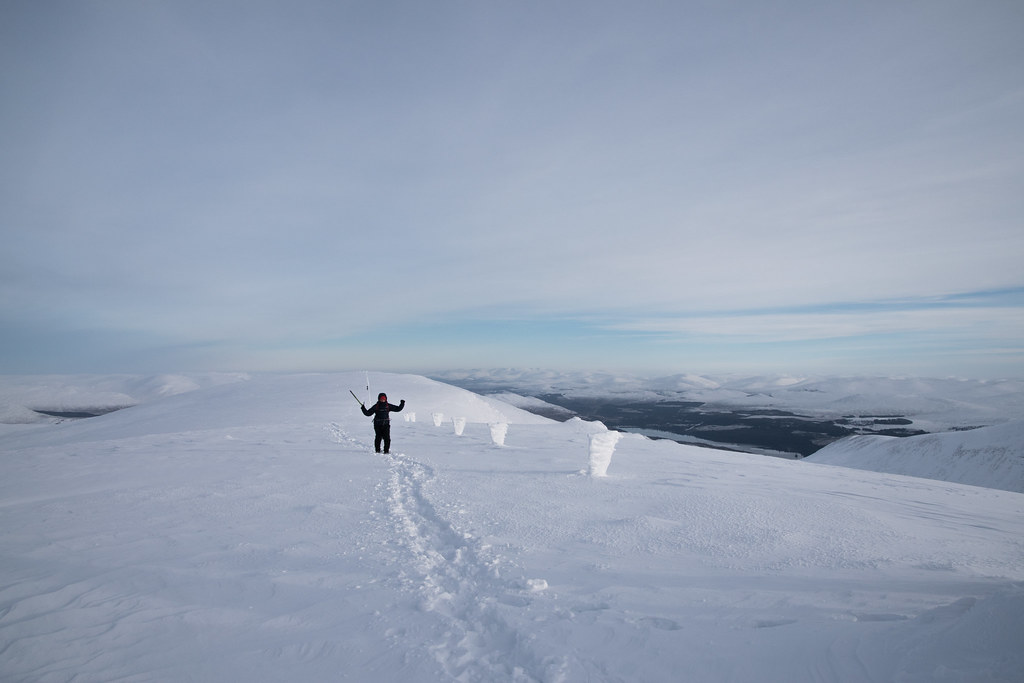 Time wise it was approaching 13:00 which meant we had taken nearly 2hrs 45mins from the first summit. I still maintain that we were keeping a relatively good pace but a couple of groups behind us were catching ground on us all the time - presumably due to the already bashed snow

We were overtaken on our way up Coire a' Chriochairein by one gent with skis on. He made it look very easy, almost as if he was a giant metaphorical hot knife and the snow cover Scottish mountains were mere giant tubs of Lurpak!

I remember this moment, which is surprising considering I am writing this Walk Report a month in delay, due to the fact he went past just as we were all beginning to cramp up!

Heading down towards The Window we came to unanimous agreement that we would let winter win the day. Creag Meagaidh would not be attempted and will remain for another day. Justified that it would be a perfect summer high camp with extensive views, or offered a really long summer walk combining with Beinn a'Chaorainn and Beinn Teallach further west.

On route to The Window with waist deep powder. 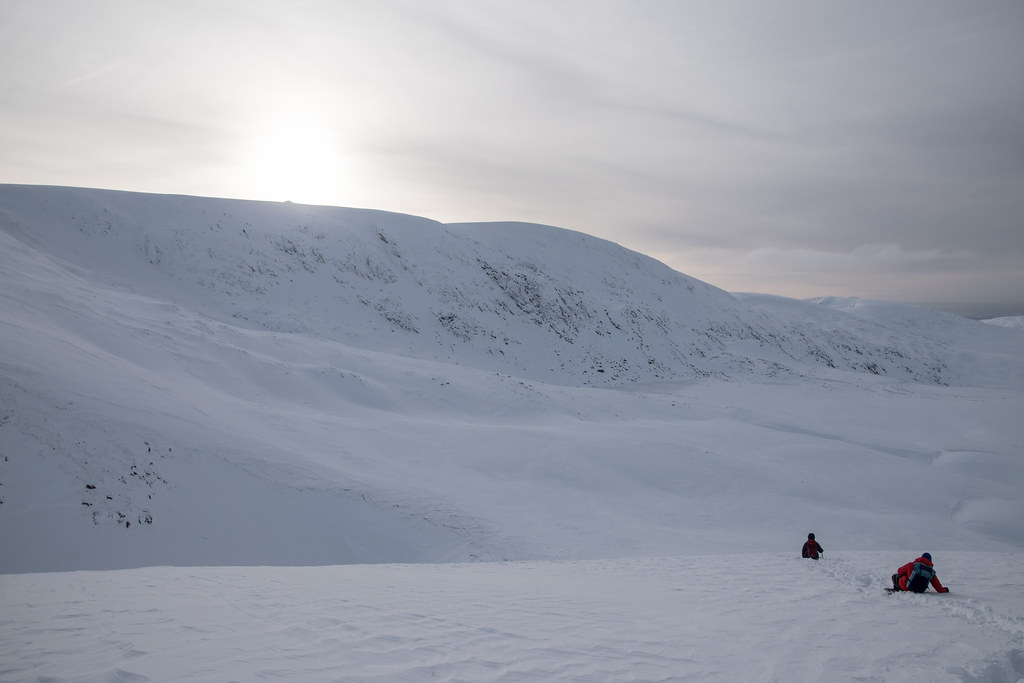 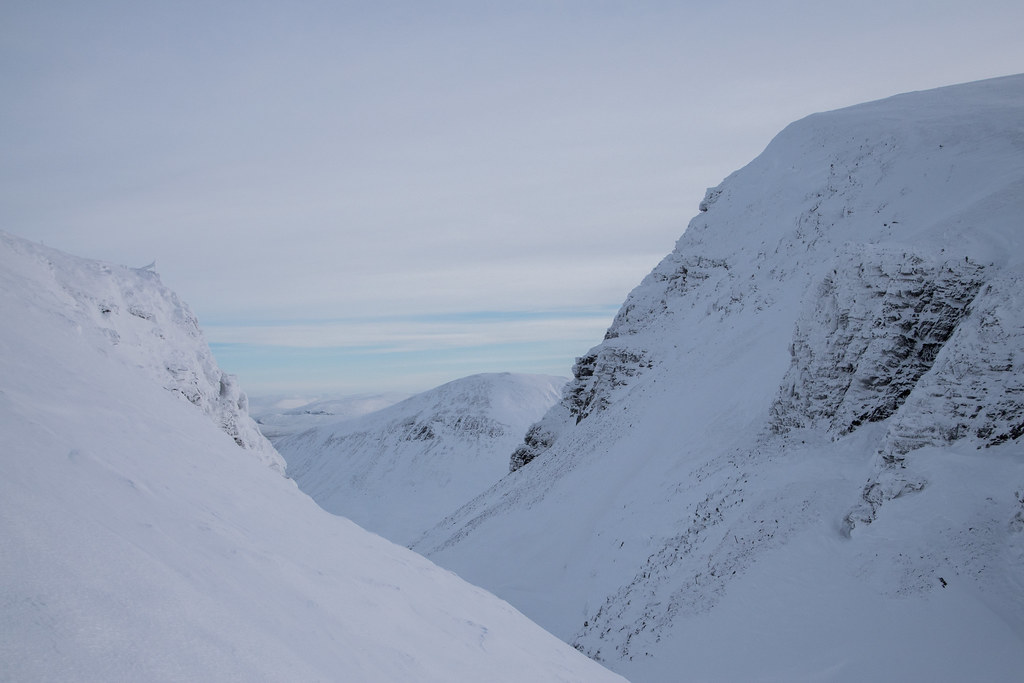 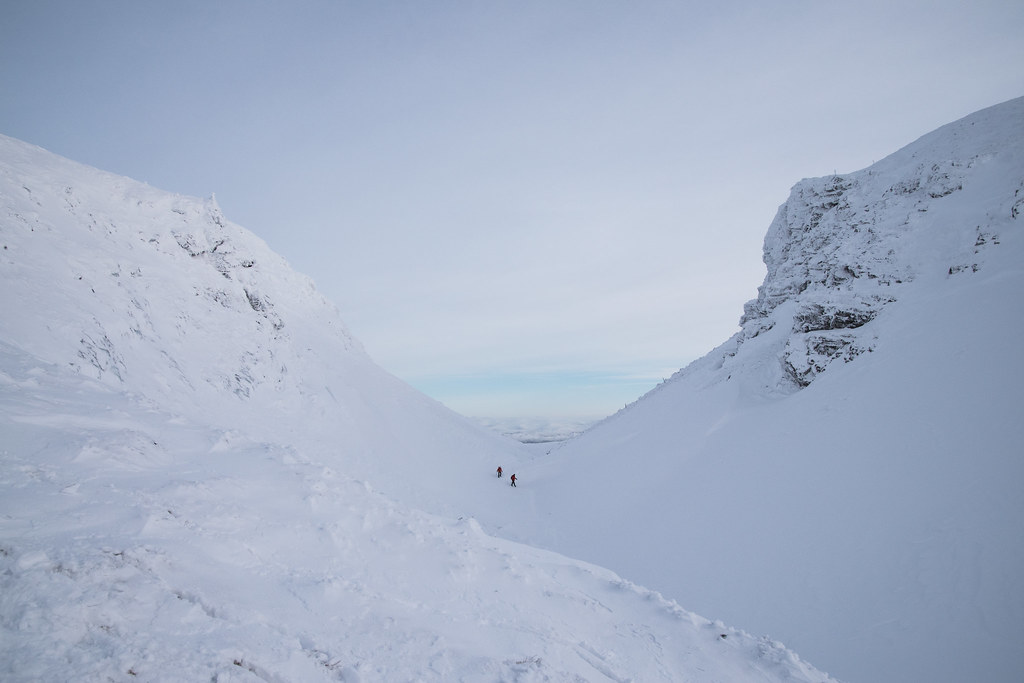 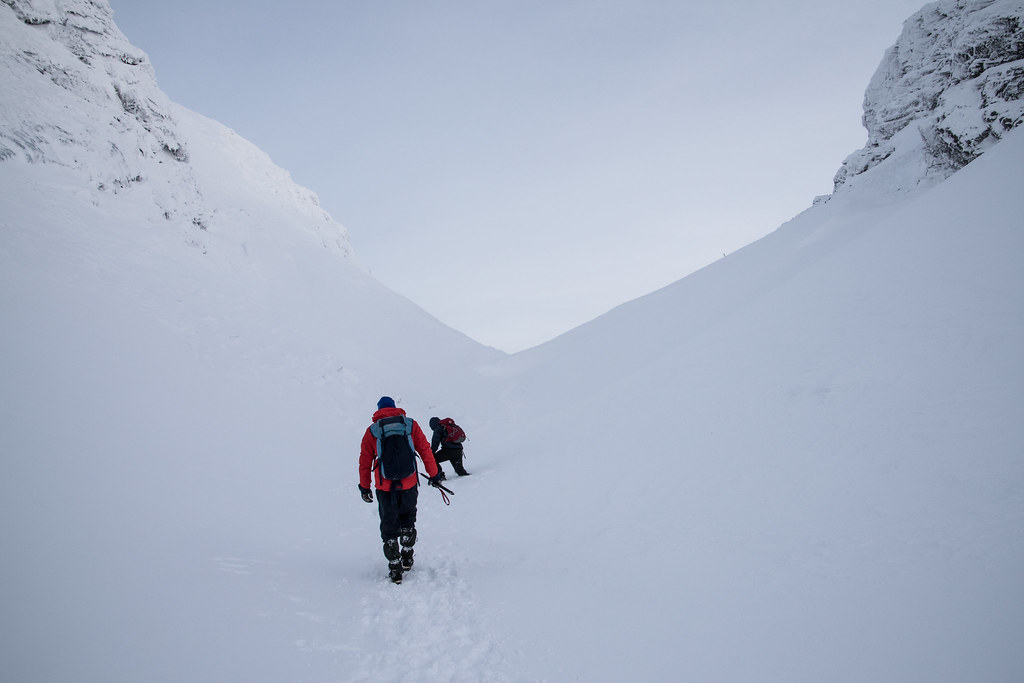 For my first proper winter outing it was a good feeling to be coming off the hill with a few hours of spare daylight hours remaining. Descending down from the window was rather enjoyable, super deep powder probably made it easier coming down than in the summer.

The only minor "issue" was when I ended up deeper in the snow than intended and my foot appeared to be completely stuck in the snow - obviously uninjured, Andrew found the funny side and offered little sympathy as Snapchat was consulted for advice

. After a few quick bashes from the ice axe I was free and ready to get going again. I remember saying "If I was on my own I would probably be panicking by now"!

Heading down from The Window. 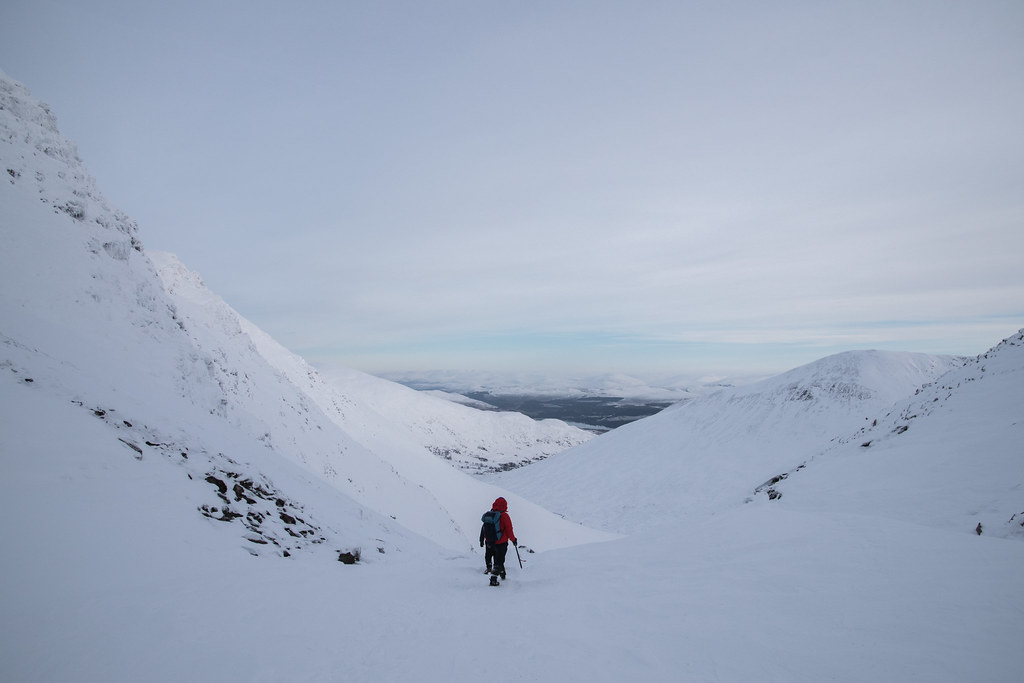 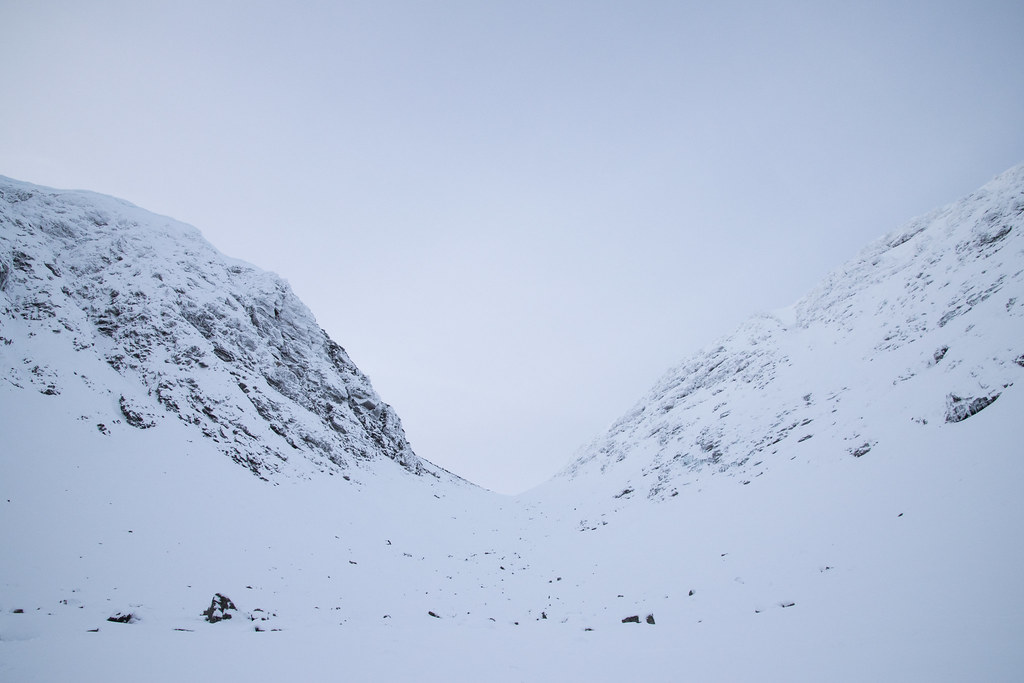 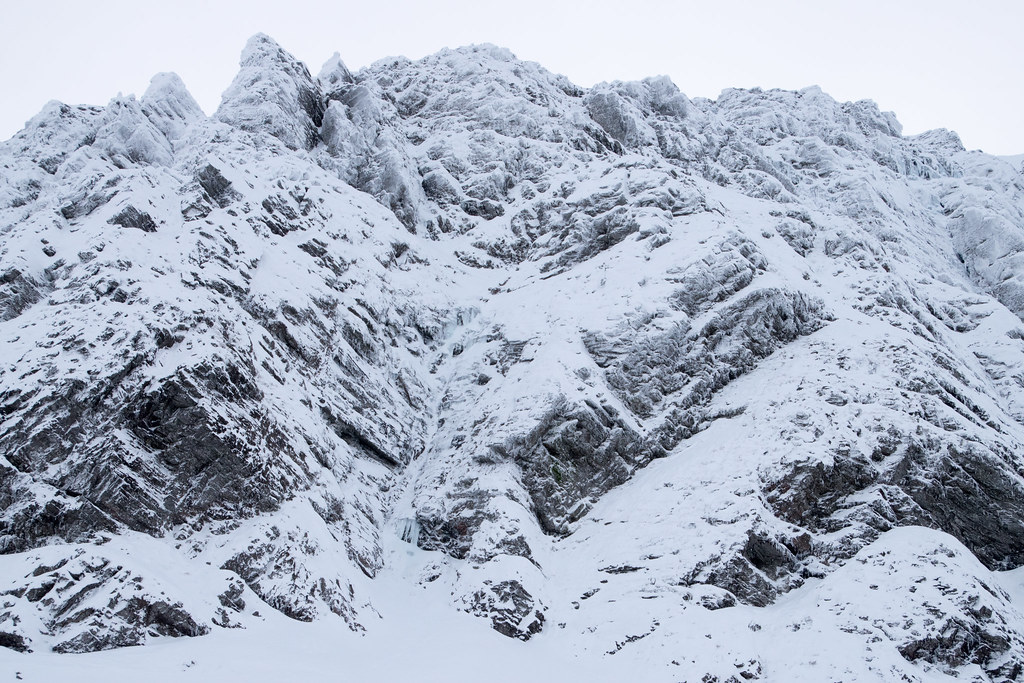 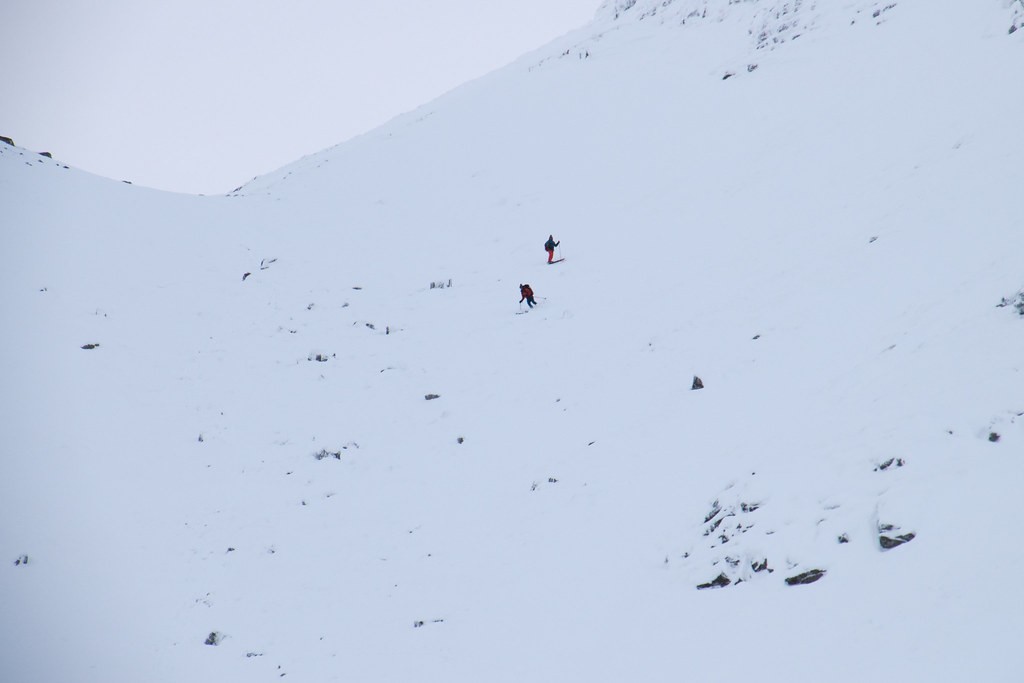 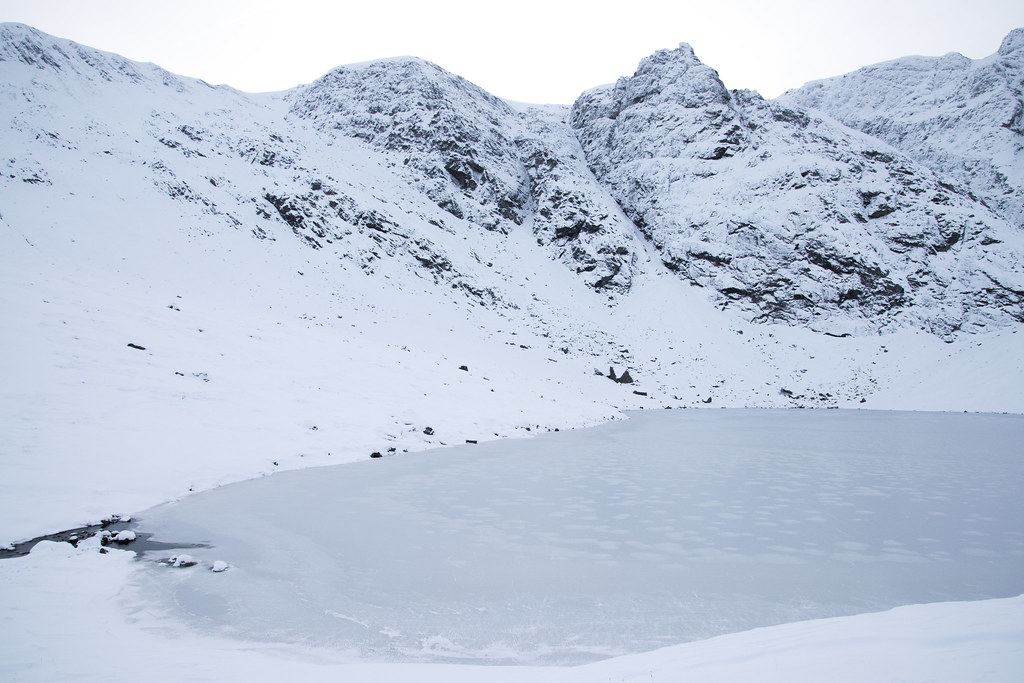 One final look back towards Creag Meagaidh. 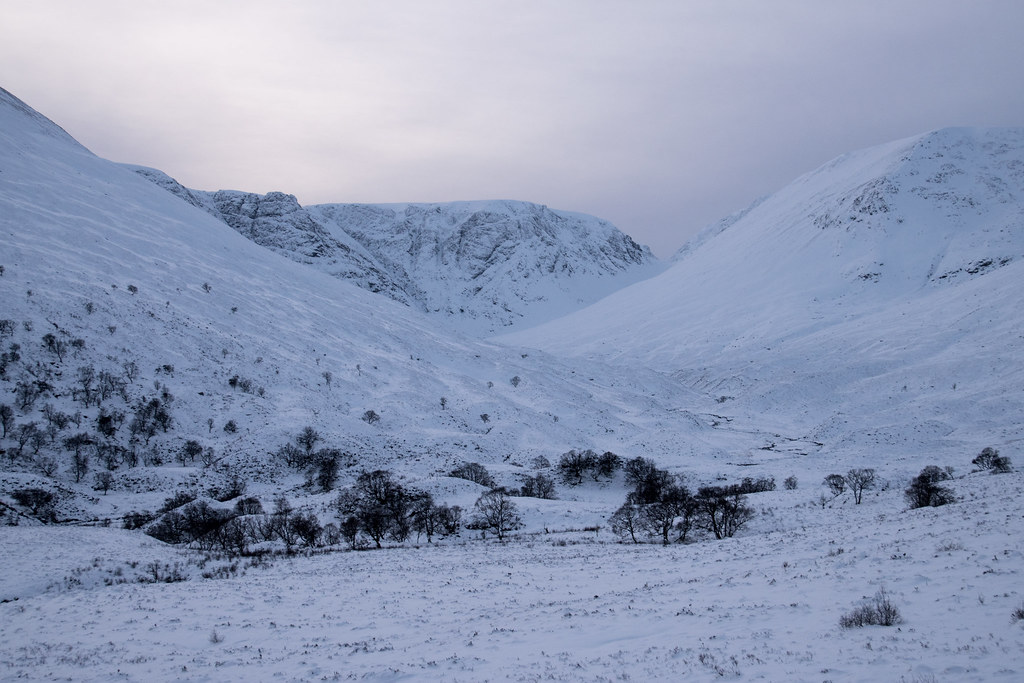 By 16:00 we were back at the car to get stripped off and put some fresh clothes on! It was a long day, an early start, leg breaking work, ultimately an unsuccessful execution of Plan A, but what a brilliant day

Callum was kind enough to take us up from Perth and it was my shot in the back of the car for the route down. I was determined to stay awake but I am pretty sure I failed miserably in the last ten minutes - out like a lightbulb!

. In order to top up energy reserves before the drive back to Aberdeen, Andrew and I stopped at McDonalds at Perth Broxden

. Not one for a McDonalds (excluding a post bevy 3am feast) but this sober Chicken Legend honestly lived up to its name - it was LEGENDARY!

Obviously back in the office on Monday I was certain that we probably could have made it up Creag Meagaidh but I have no doubts we made the best decision at the time for not only our safety but the overall enjoyment of the day!

Re: Letting winter win on the Creag Meagaidh Circuit!

Great photo's - looks like a fantastic and freezing day! You didn't fancy a swim in that frozen lochan?