A bracing day out in the Fannaichs

A bracing day out in the Fannaichs

A long weekend at home in Inverness, and I was due to head out to a bothy with my brother-in-law on Saturday night. He cancelled, meaning at least I didn't have to bring all my bothy clobber home on the train

.Stuck my boots in though, as I had a feeling I would manage out on the hills somewhere.

Sunday looked better, with the winds forecast at 30mph rather than 70mph, so I picked that. There may have been more sunshine in the Cairngorms, but I had a preference for something in the west. The Fannaichs are great for the winter as they offer plenty of interesting ridges and crags while still being s bit less committing than the biggies in Torridon. Also it takes less than an hour to drive there and the roads are pretty good (although the Dundonnell road had a pretty good covering of snow on my way out).


our_route.gpx Open full screen  NB: Walkhighlands is not responsible for the accuracy of gpx files in users posts
I left the car just before 10am - not too bad as I hadn't got up that early. Down at the road was bloody cold, but a good stamp down to the boathouse at Loch a' Bhraoin, up the Allt Breabaig and onto the slopes of Meall a' Chrasgaidh soon sorted that out, and I was down to base layers for most of the ascent. 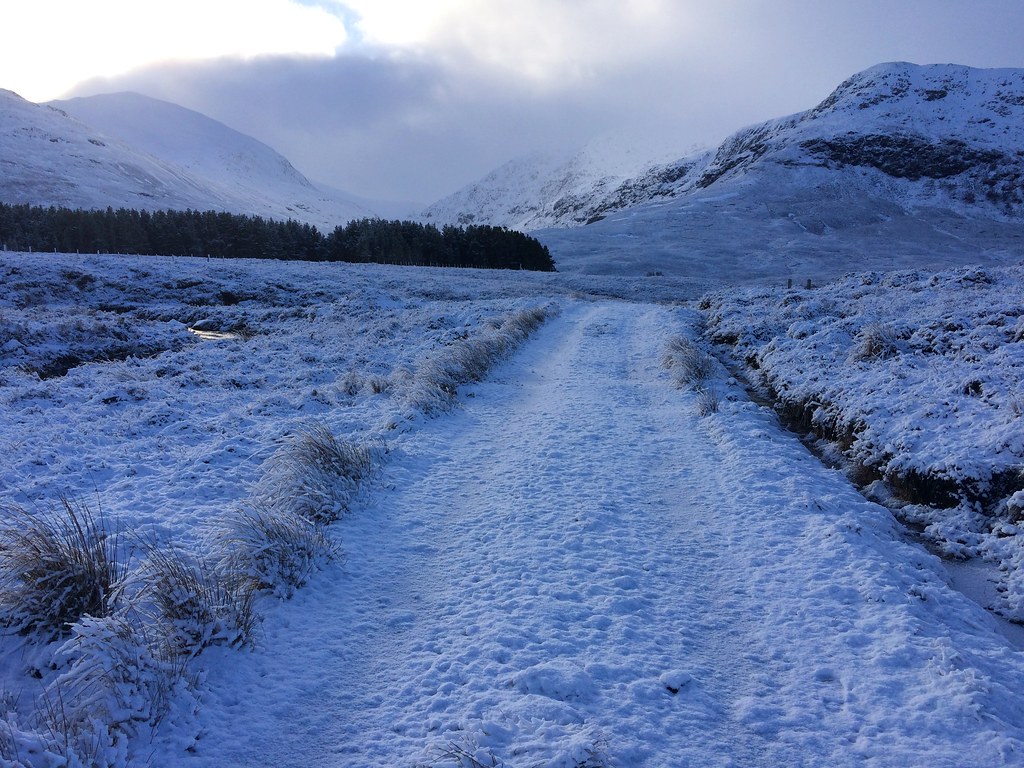 Allt Breabaig and Sgurr nan Clach Geala on the left 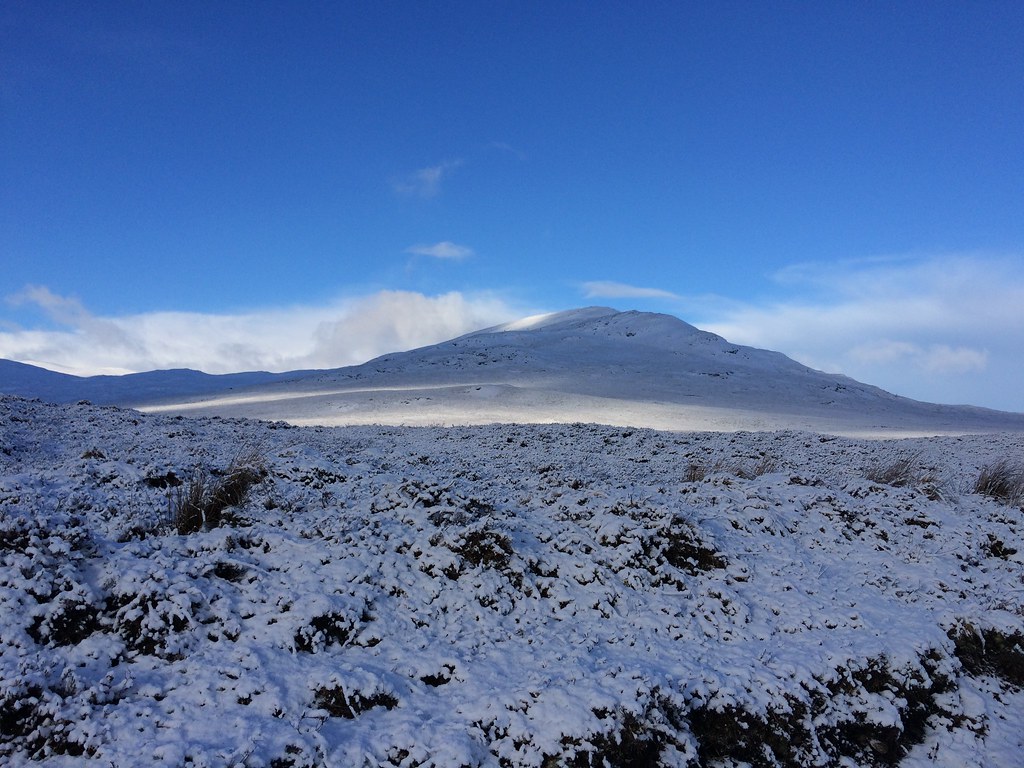 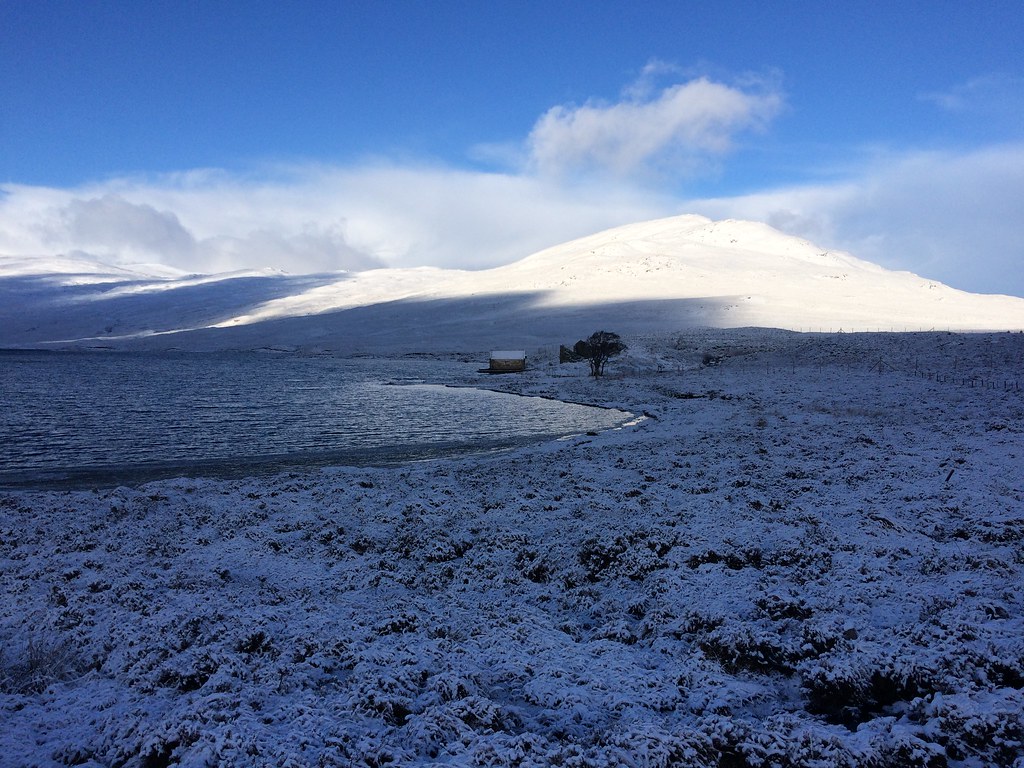 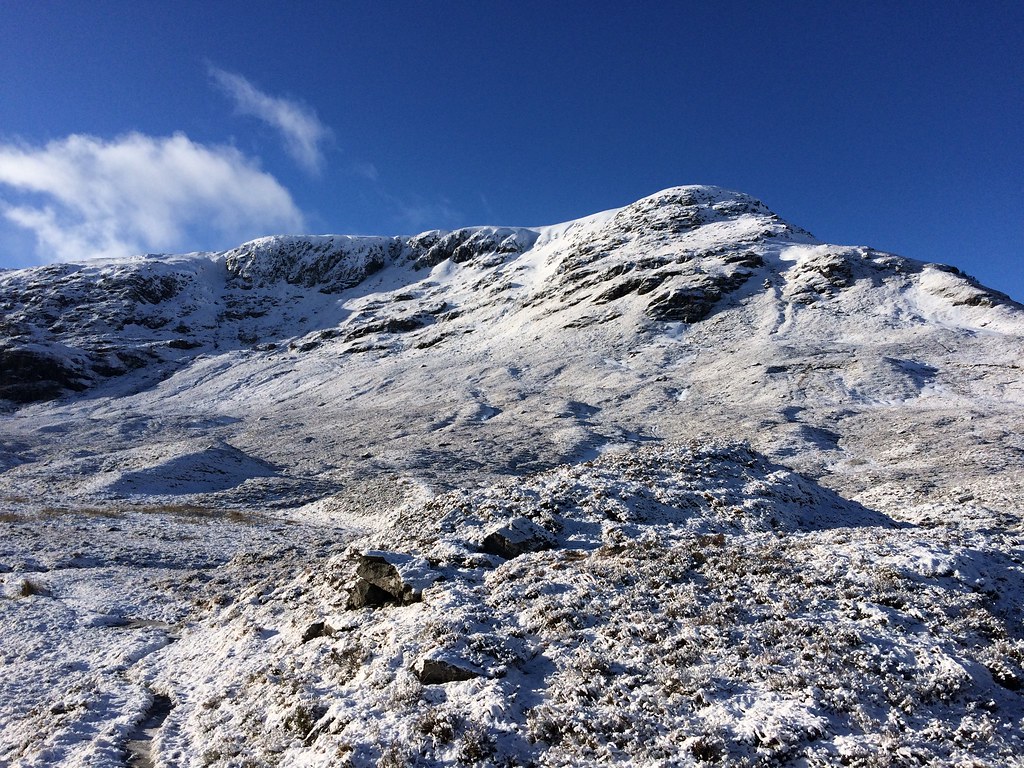 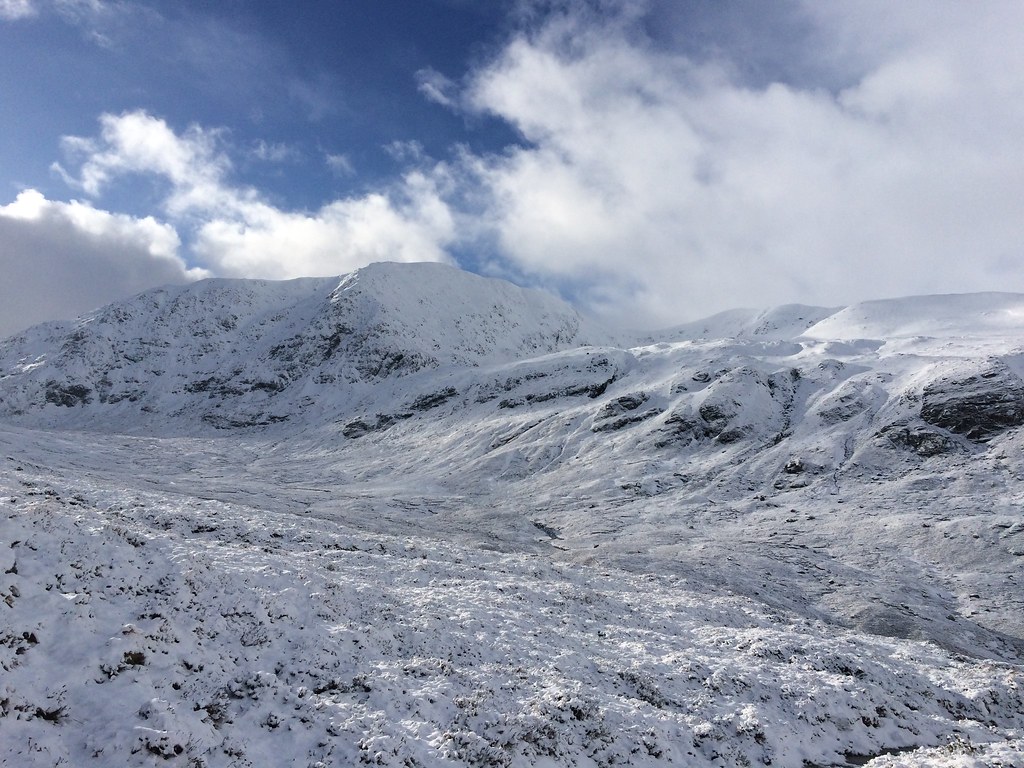 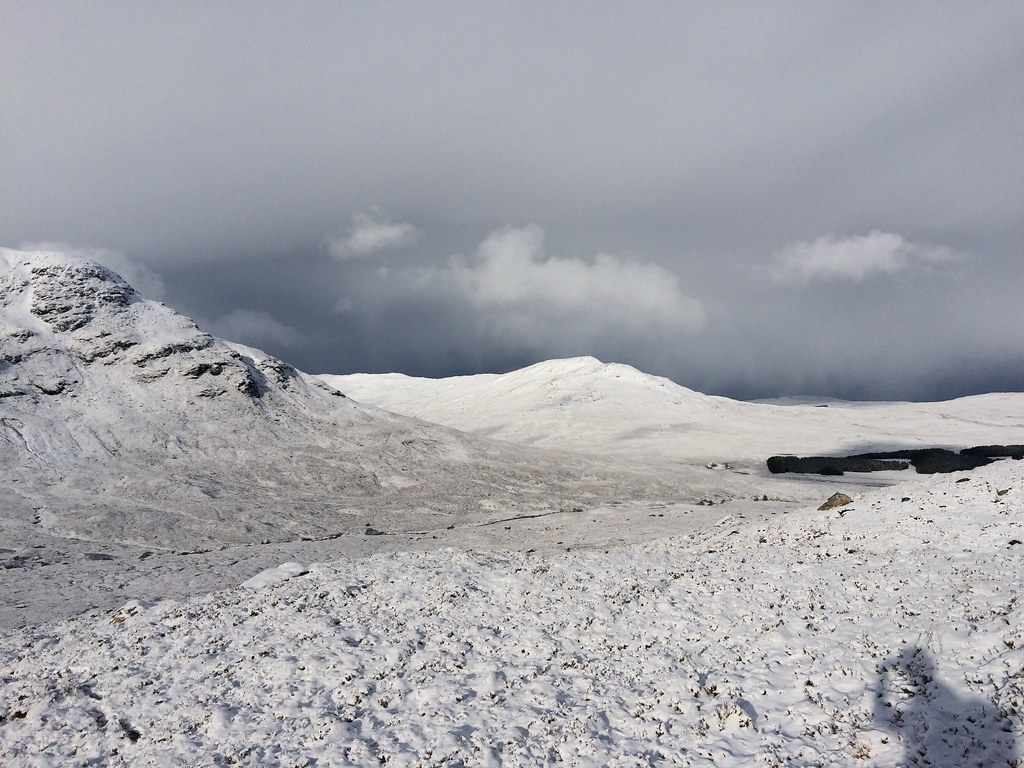 Back down the Allt Breabaig - shower coming

A snow shower moved in at around 700m which had me reaching for my jacket and gloves again. There were some icy sections on the shallower ascent to the summit, but I could dodge around these easily enough. 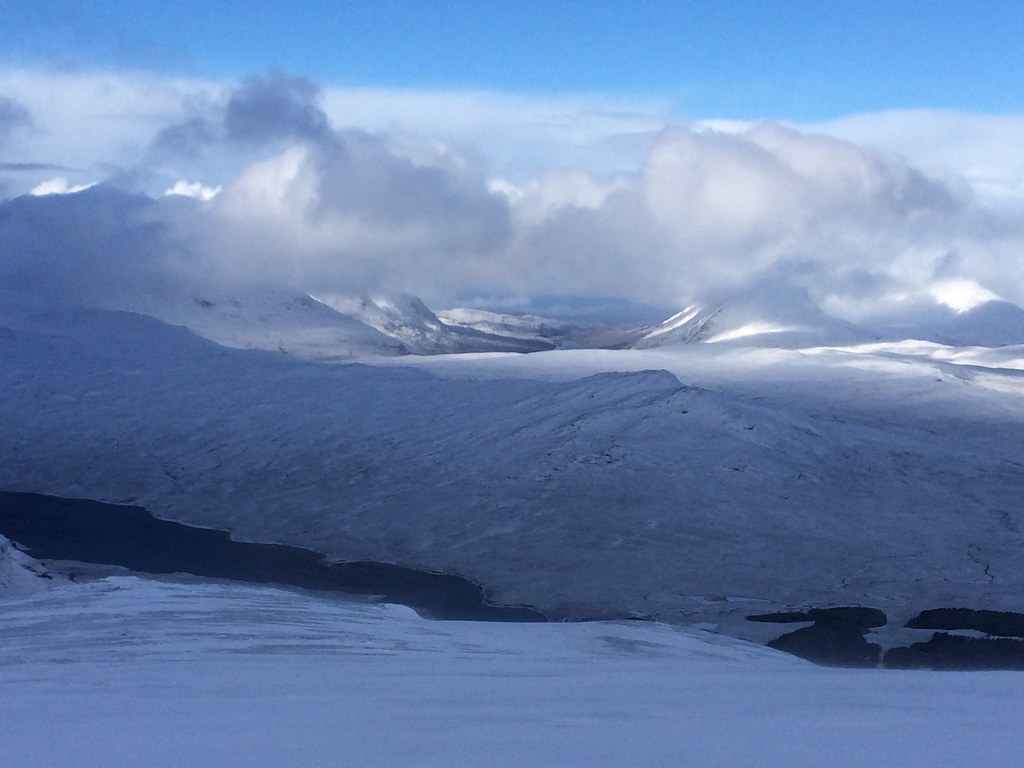 Over Loch a’ Bhraoin to Strath na Sealga

It wasn't a great day for photography due to the amount of spindrift. Also I was using my phone (lost my camera in the Southern Uplands last weekend, although I have tracked it down and hope to get it back at some point

), which meant taking off a glove every time I wanted a shot. Usually by the time I took a photo, the gap in the clouds/sunshine/whatever had moved on, so I bothered less and less as the day went on. 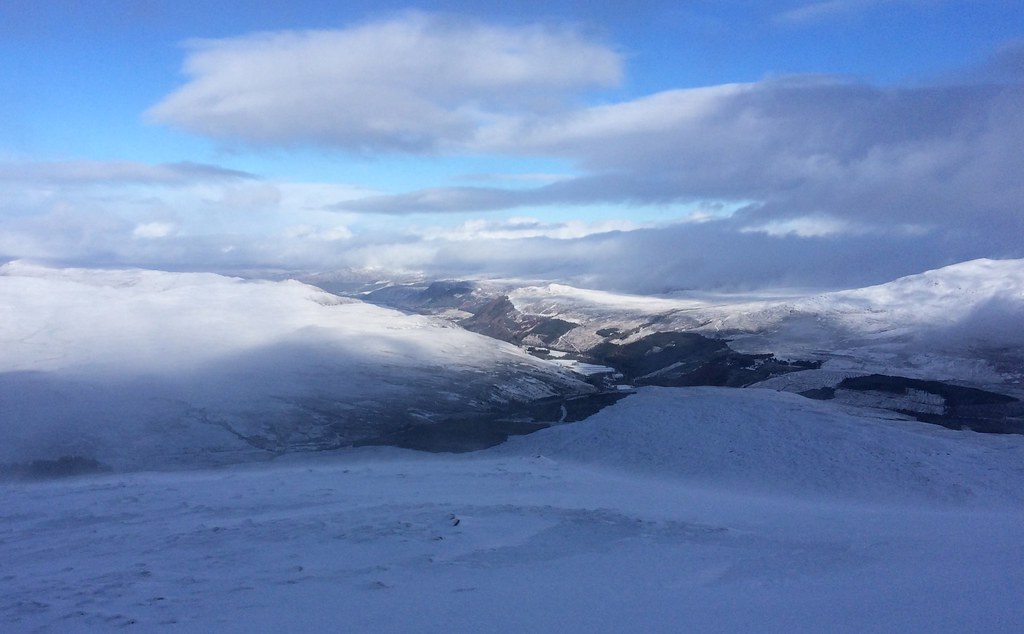 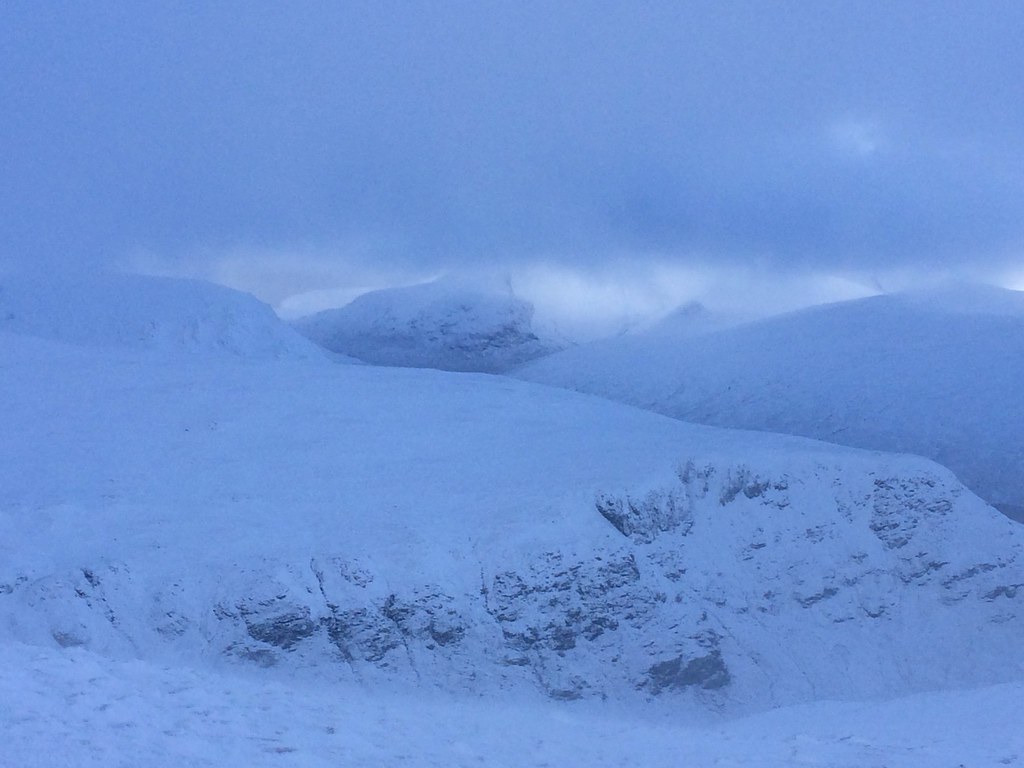 There was more ice to dodge on the way off Meall a' Chrasgaidh, then a mixture of scoured icy patches and knee-deep drifts on the way up towards Sgurr nan Clach Geala. 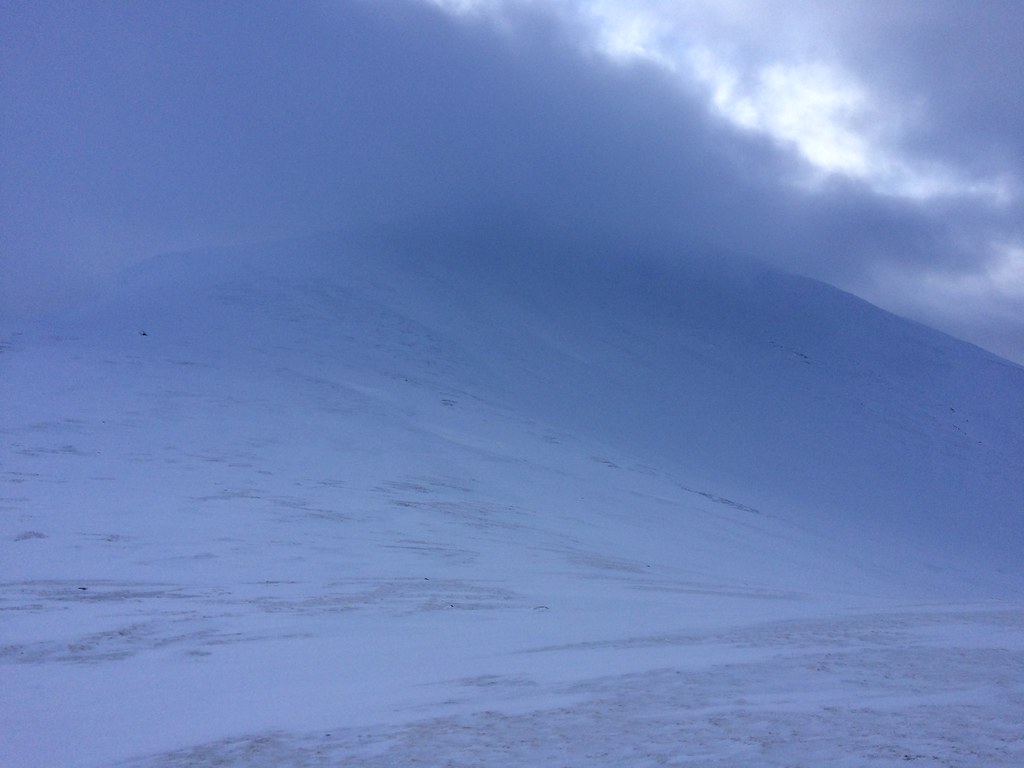 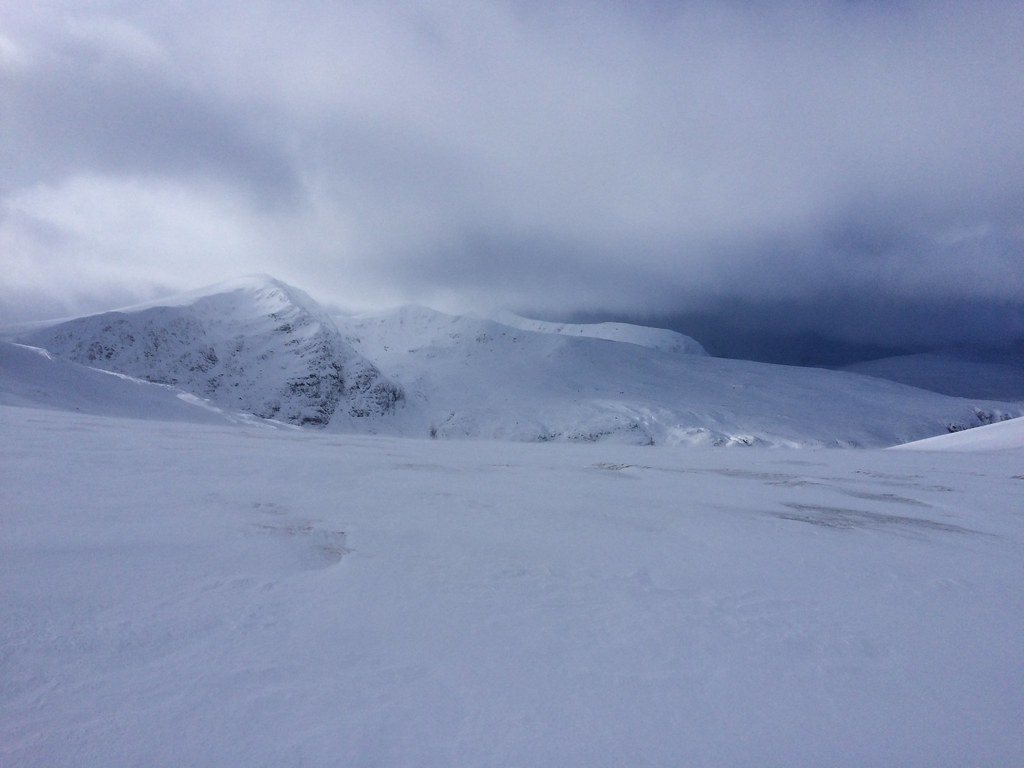 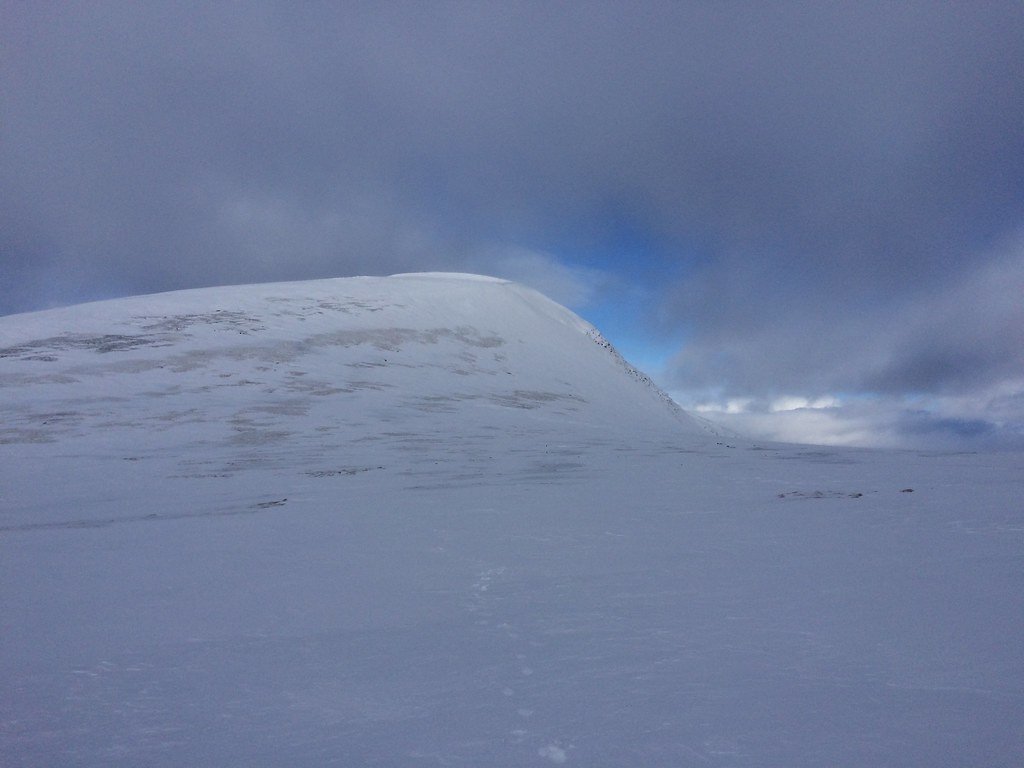 Back to Meall a' Chrasgaidh 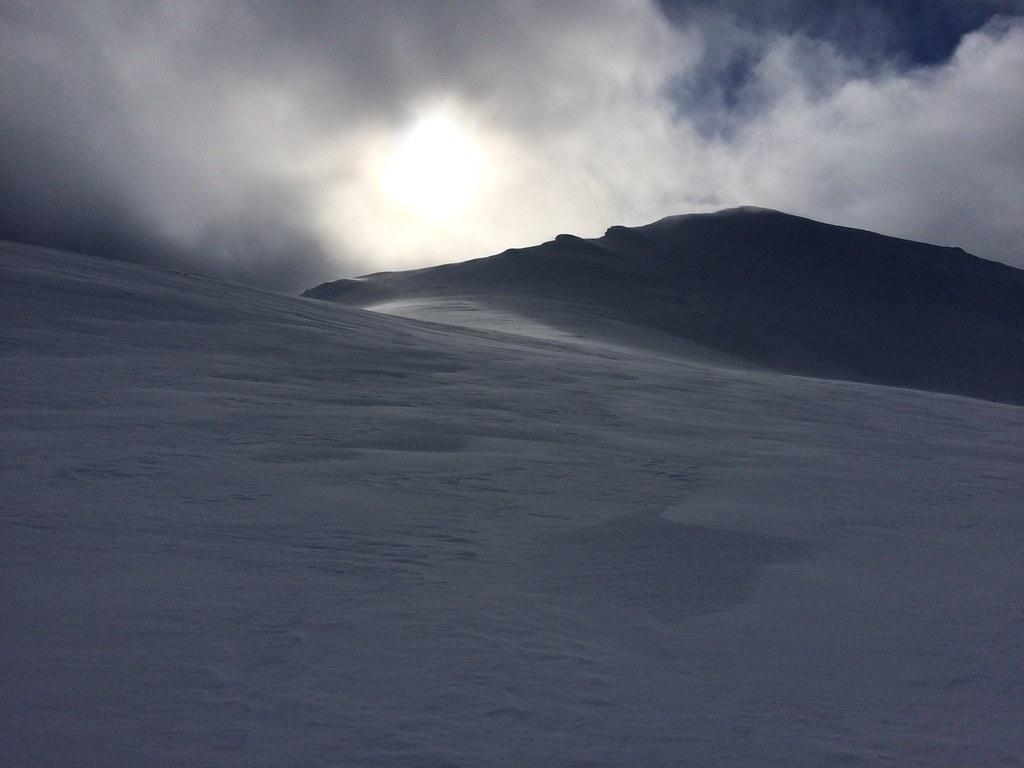 I could see some interesting tottering cornices on the NE ridge of Sgurr nan Clach Geala, and suspected I would need to contour the steeper slopes behind them rather than follow the ridge crest itself. Not sure what the snow/ice would be like that, I dug out my crampons for the first time in over 7 years. As I was putting them on, it occurred to me that last time I had worn them was with a different type of boots, and the linking bar might not be adjusted correctly for this pair (it needs a spanner to adjust, which I obviously didn't have with me

). Fortunately they seemed to fit OK, but after 5-10 minutes of fiddling around with them, I looked up to see nothing. The cloud had rolled in and it took me a moment to get my bearings again!

The ascent wasn't too bad, but I was glad I had put crampons on as the snow came in a number of different forms, some of which were very hard. Conditions were almost white-out, but there was enough rock around to give some sense of location. Perspective was still difficult though, and I blundered through more drifts, unable to see where they suddenly turned to hard snow. The cornices were pretty impressive when they could be seen, but I mostly stayed well back, as I wasn't sure when a gully might cut into the ridgeline.

I finally reached an ankle-high toadstool of snow, which after a bit of chipping turned out to be the top of the trig point. The wind had formed a higher dome to the east, but I was pretty sure this was hanging out over the east face, so stayed well back! No views sadly. 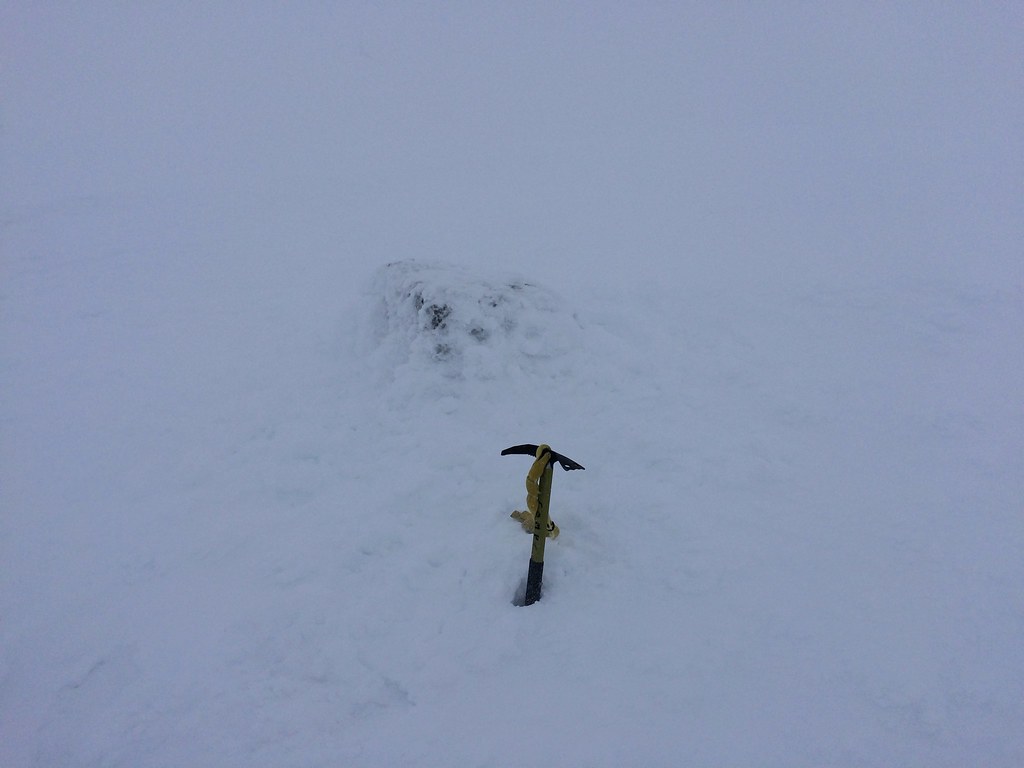 Shame not to see more of the NE ridge, but it was quite satisfying to get there after having to think a bit to stay safe. I took a bearing for the col which kept me well back from the eastern cliffs, but even then perspective was difficult. With little else to see, I could make out a line which probably represented the edge of the cornice over the east face. But was it 5m away or 20m? The good thing about Sgurr nan Clach Geala was that the ground was pretty safe over to the west, so if in doubt, head right a bit. I eventually popped out at the col of Cadha na Guite.

While I thought briefly about heading home, I was in quite a good mood having made it over Sgurr nan Clach Geala, and thought maybe the sun might re-appear if I stayed up a little longer. So I headed on towards Sgurr nan Each, which is only a short climb anyway. Again I had to stay well back from the edge. At one point, I was briefly lost in my own world, looking at my right crampon and thinking that the link bar probably could do with shortening. In fact I could remember how it always seemed to come loose on my previous pair of boots too. Then I heard a muffled bang, and saw a lump of snow to my left slide off into the abyss

. ****, even when I thought I was staying well back from the cornice, I was practically on top of it! I don't think I was actually out over the face, but far too close for sure. No harm done, but it took a couple of minutes before the potential consequences sunk in properly. 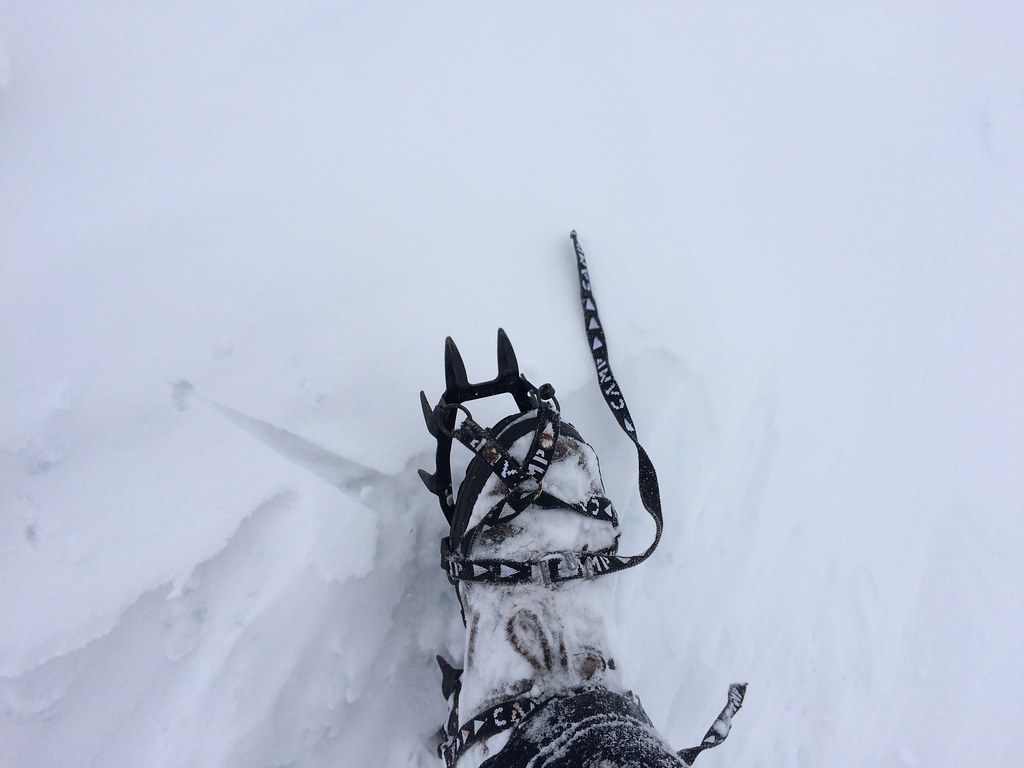 Crampons probably need adjusting - but this isn't the place to be thinking about that!

I was practically on the summit at this point - a minor bump then a short flat section of ridge then I was at the cairn. On my way back to the col, my footprints had already filled in with spindrift, but just as I took another bearing, the weather began to clear again. That's more like it! 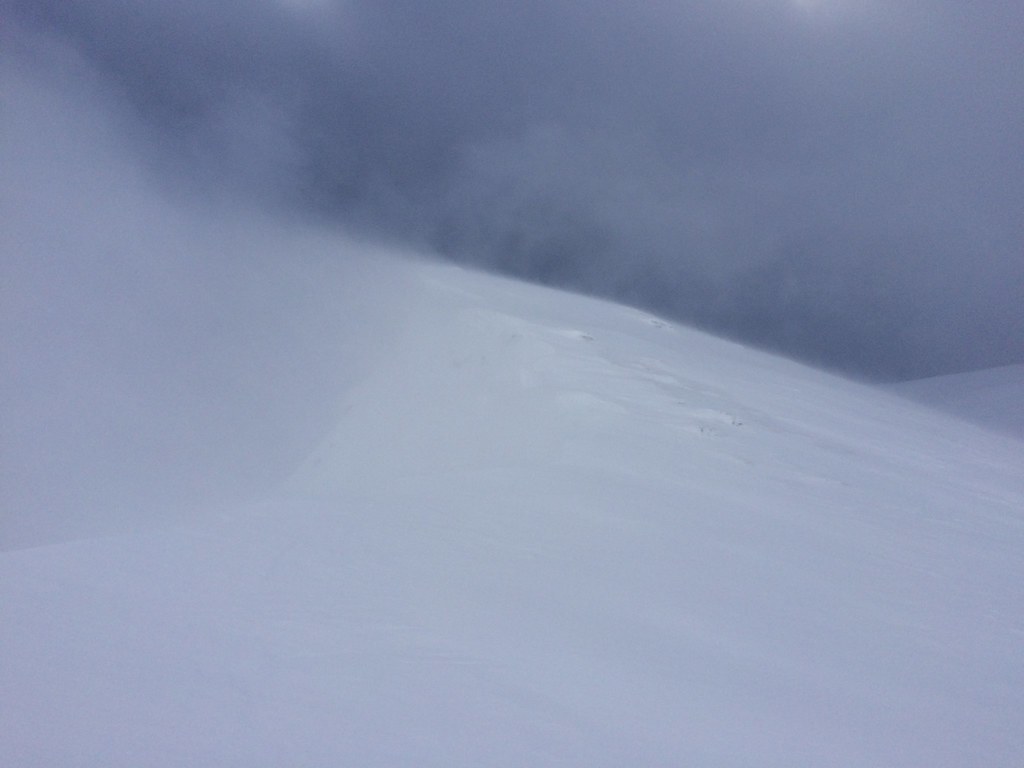 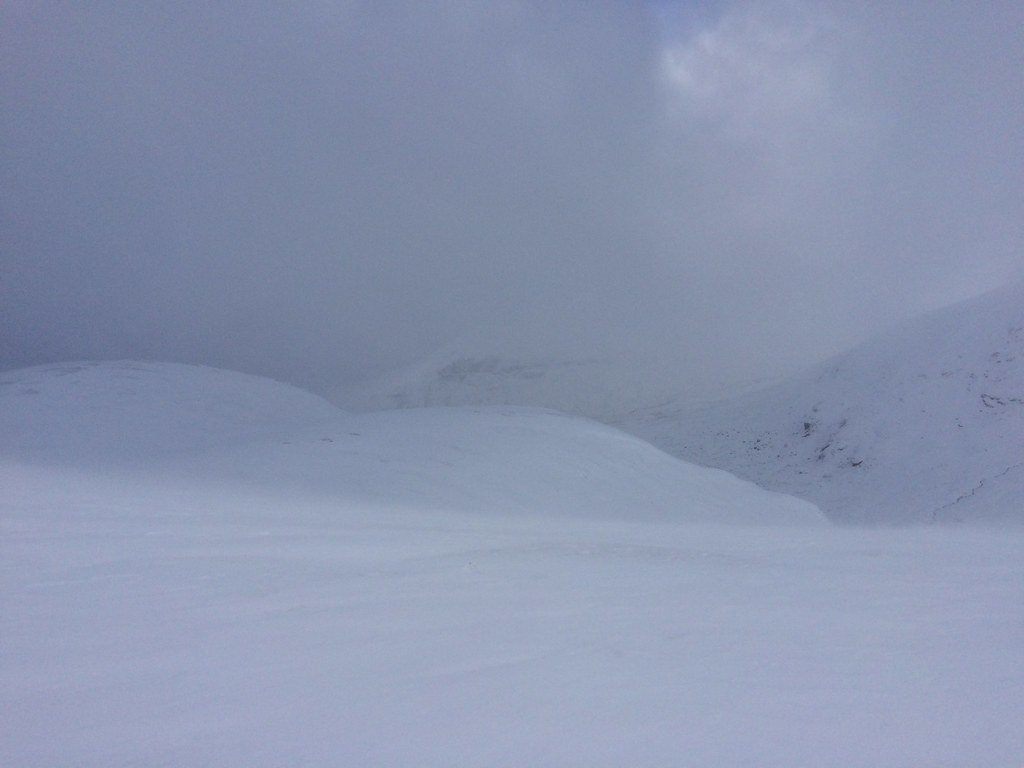 Down to the head of Loch Fannaich 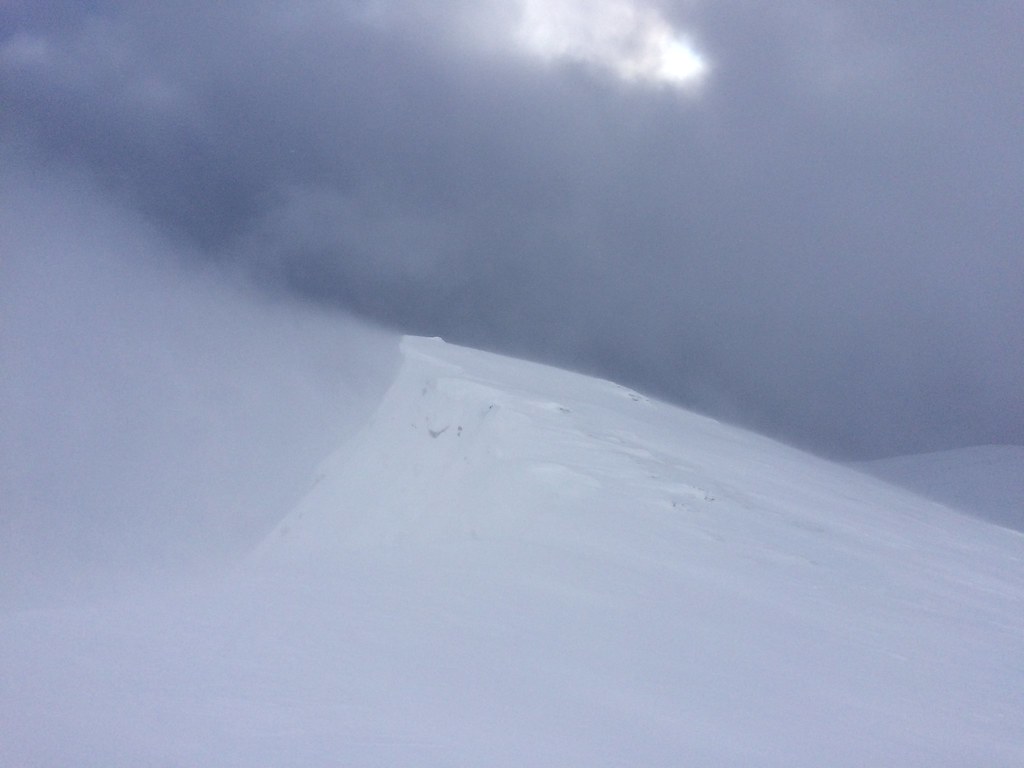 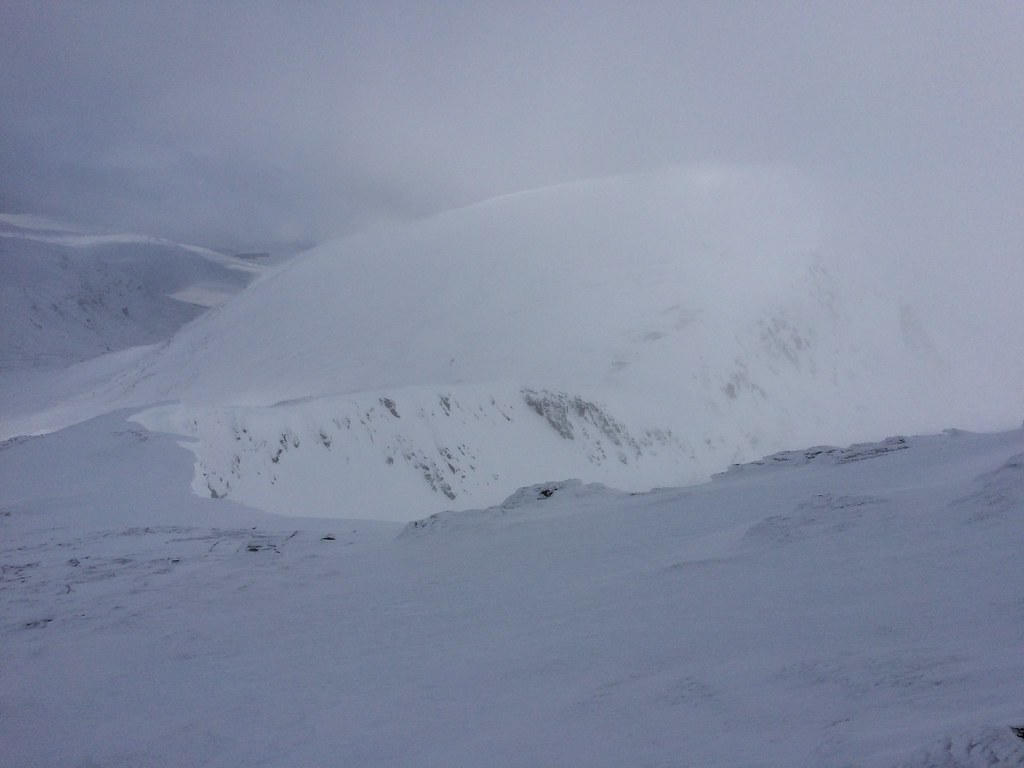 Back to Sgurr nan Clach Geala from Sgurr nan Each 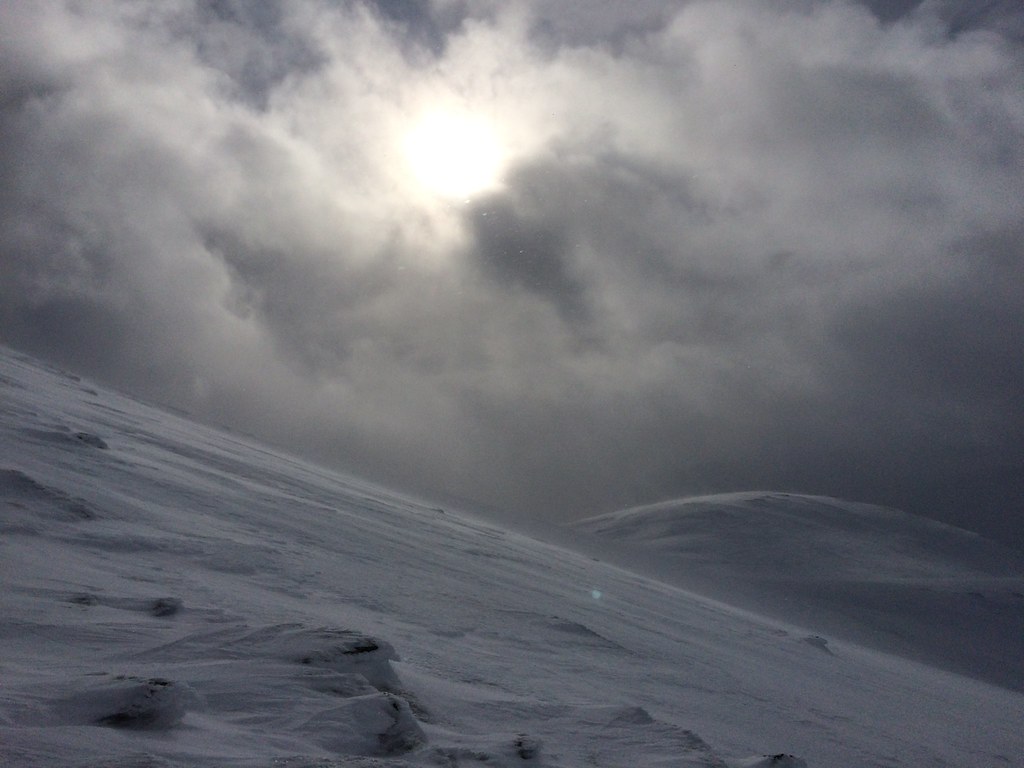 On Sgurr nan Each 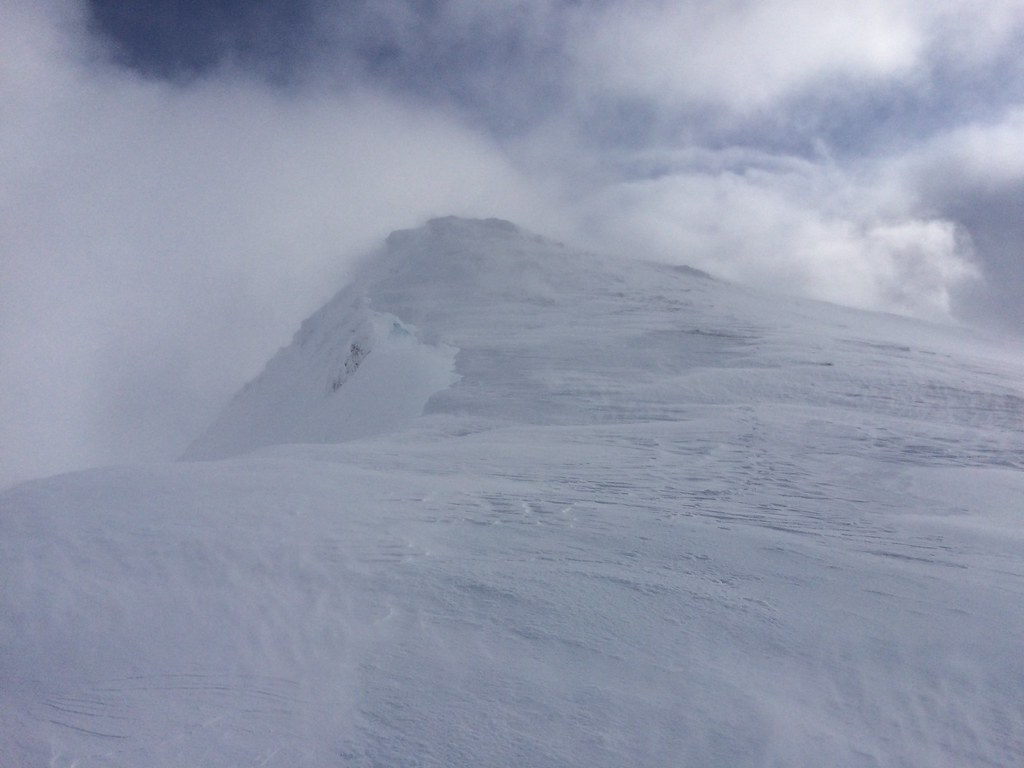 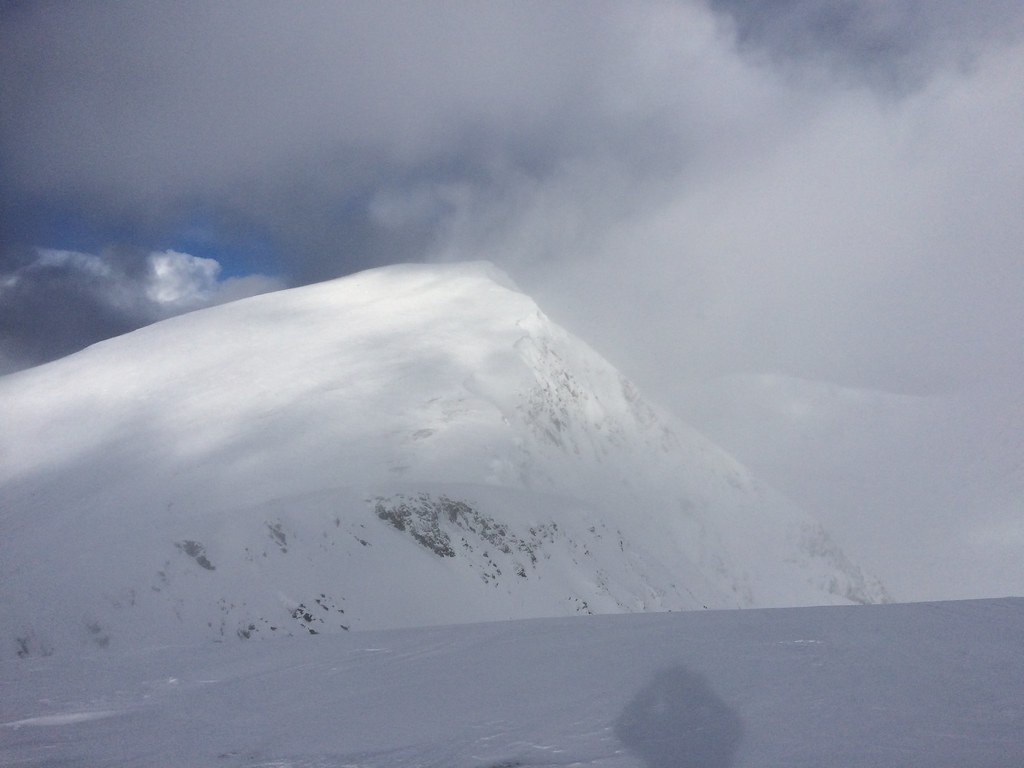 Once off the ridge, it was a fast descent through mostly soft snow to the stalkers path down the Allt Breabaig. As I hadn't had a crampon incident yet, it was now time for one. Making good speed down the corrie, I finally caught one crampon on the other and went flying headfirst

. Not an issue, but it was probably time to take them off. 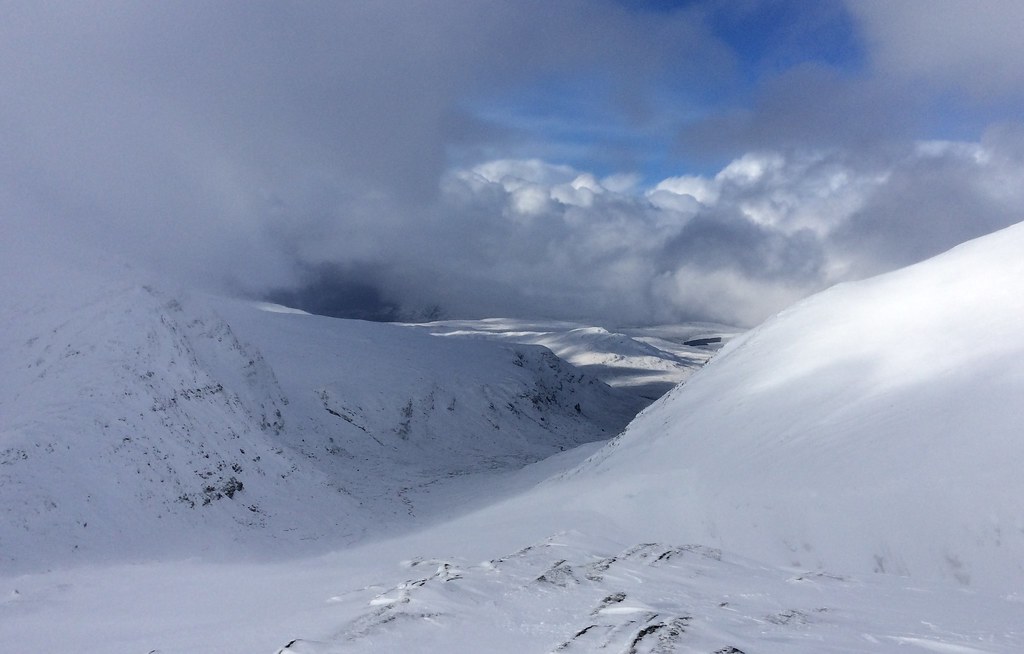 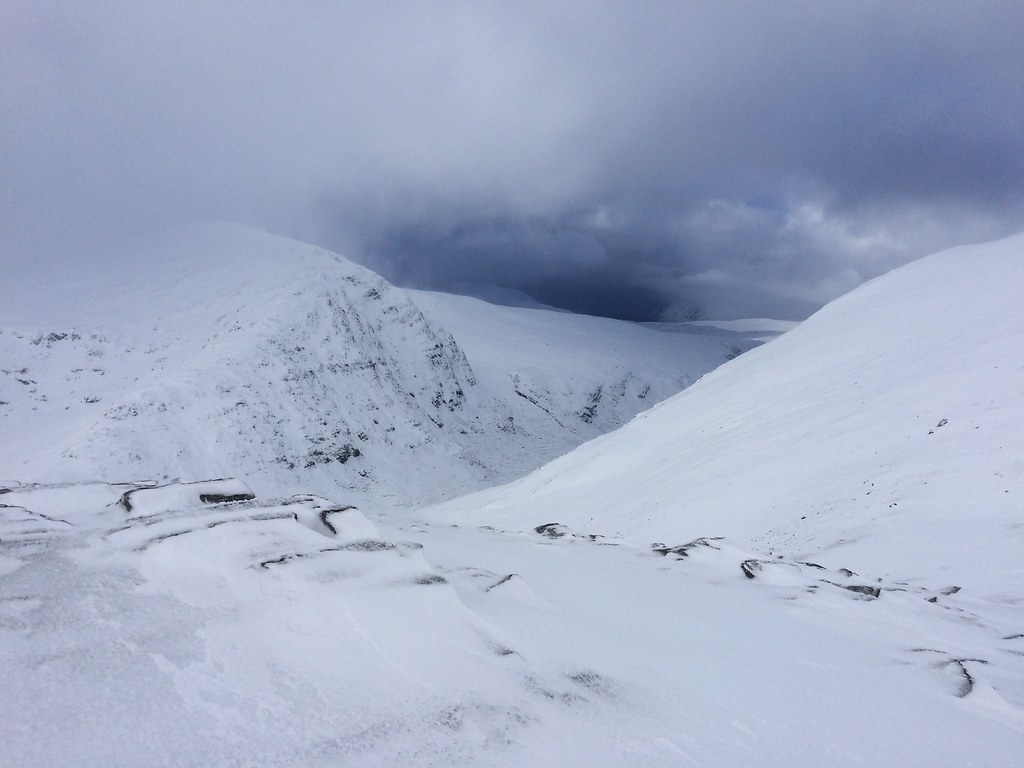 There was a fair bit of snow high up in the Allt Breabaig, and I didn't immediately find the path as it was buried. Another sleety snow shower funneled up the glen and I resigned myself to a tedious trudge out, wondering why my nice pair of ski goggles are always in the cupboard at home at times like these

. I soon found the path and the shower passed, so it wasn't so bad. 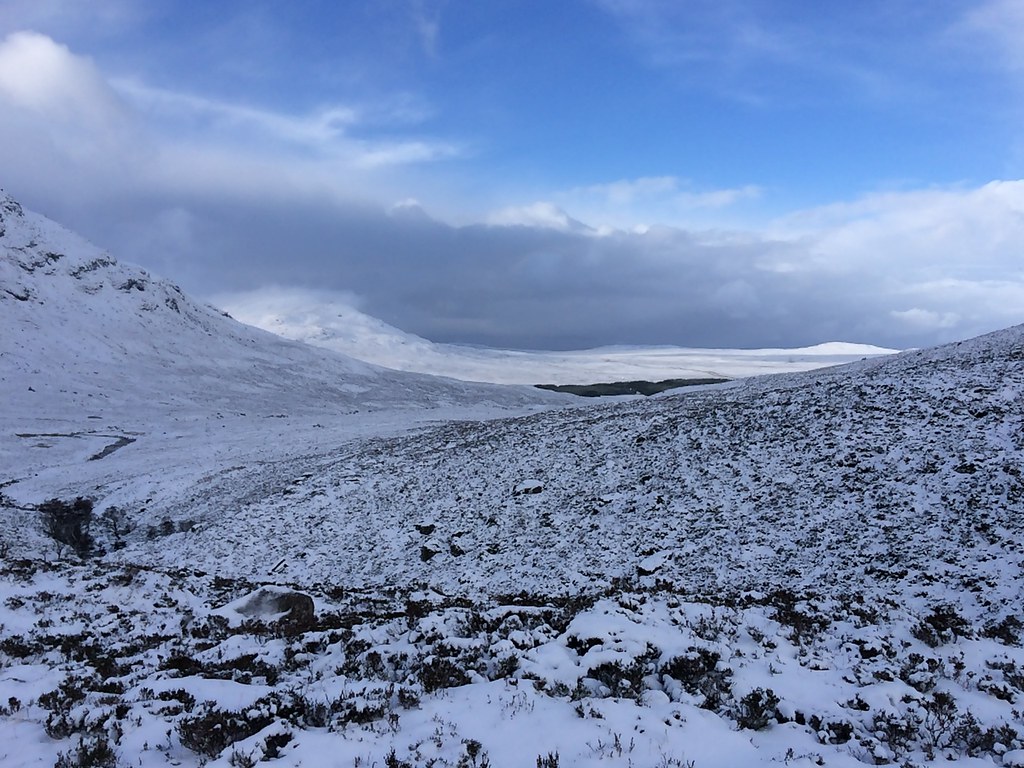 Walking down the Allt Breabaig

It hadn't been a day for hanging around, so finally at around 3pm, I stopped for lunch - I was starving by this point! After another splash through the Allt Breabaig, I was back at the car just before 4pm. At one point, for a very brief moment when dropping down to the stalkers path, I thought I would have plenty of time to go over Sgurr Breac and A' Chailleach as well. That idea wore off fairly quickly

. As it was, I was pretty happy to have managed this trio in some reasonably challenging conditions with plenty of daylight left at the end. 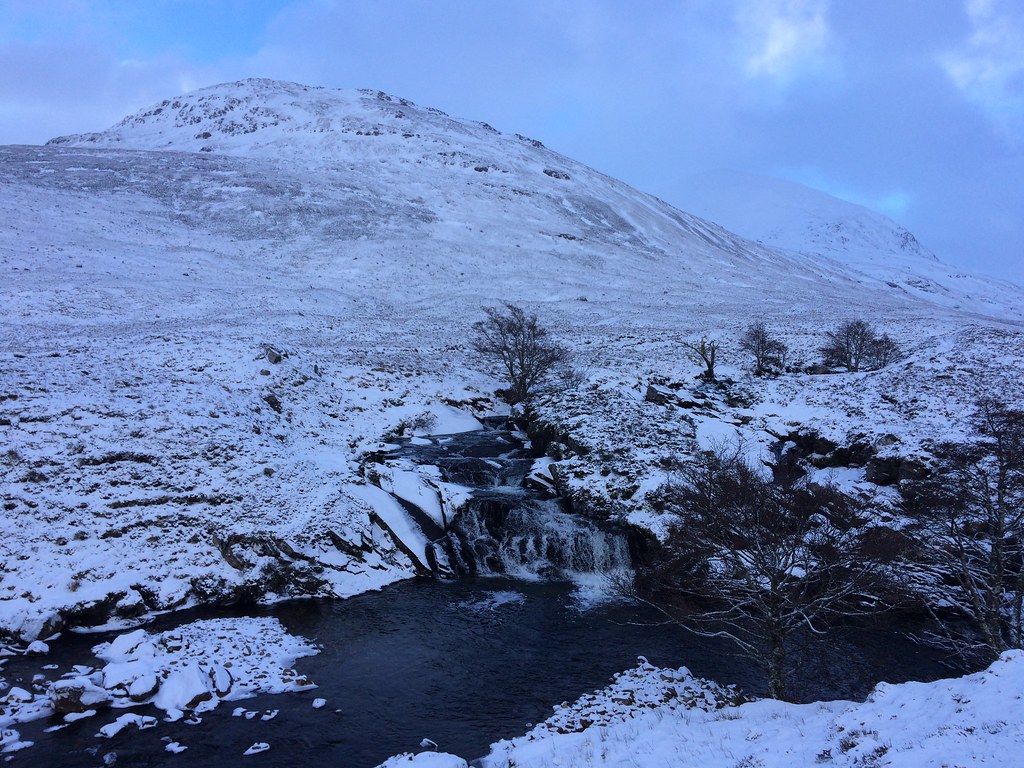 Looks like a wonderful day, and some superb winter conditions pics there, lack of camera notwithstanding. I still have these to do, but I think it might take a few more hours than are currently available in daylight

I could get quite envious when I read how long it takes you to get to places like this ...

A bit too close for comfort there eh. Well in keepin the heid.

I've never had an unplanned decent from a cornice, guess that's why I'm still on this side of the flip so as to speak

I keep well away from the edge

Bit of a scary moment there, Malky. Can't say i enjoy being near a corniced edge in poor visibility

How did you manage to go 7 years without wearing crampons? Better get some practice in

weaselmaster wrote:How did you manage to go 7 years without wearing crampons?

You know the drill - Corbetts, Grahams, humps, bumps and tumps - it's pretty easy to avoid hard snow and ice if you don't go above 900m

weaselmaster wrote:How did you manage to go 7 years without wearing crampons?

You know the drill - Corbetts, Grahams, humps, bumps and tumps - it's pretty easy to avoid hard snow and ice if you don't go above 900m

Aye, that's true - don't think I had them on much in the last couple of winters doing the smaller hills.

Looked a belter of a day on some fine hills. Sounded a pretty close call on the cornice especially with a bit of it suddenly breaking away like that.

Some interesting scenes with that broken cloud around summit level.